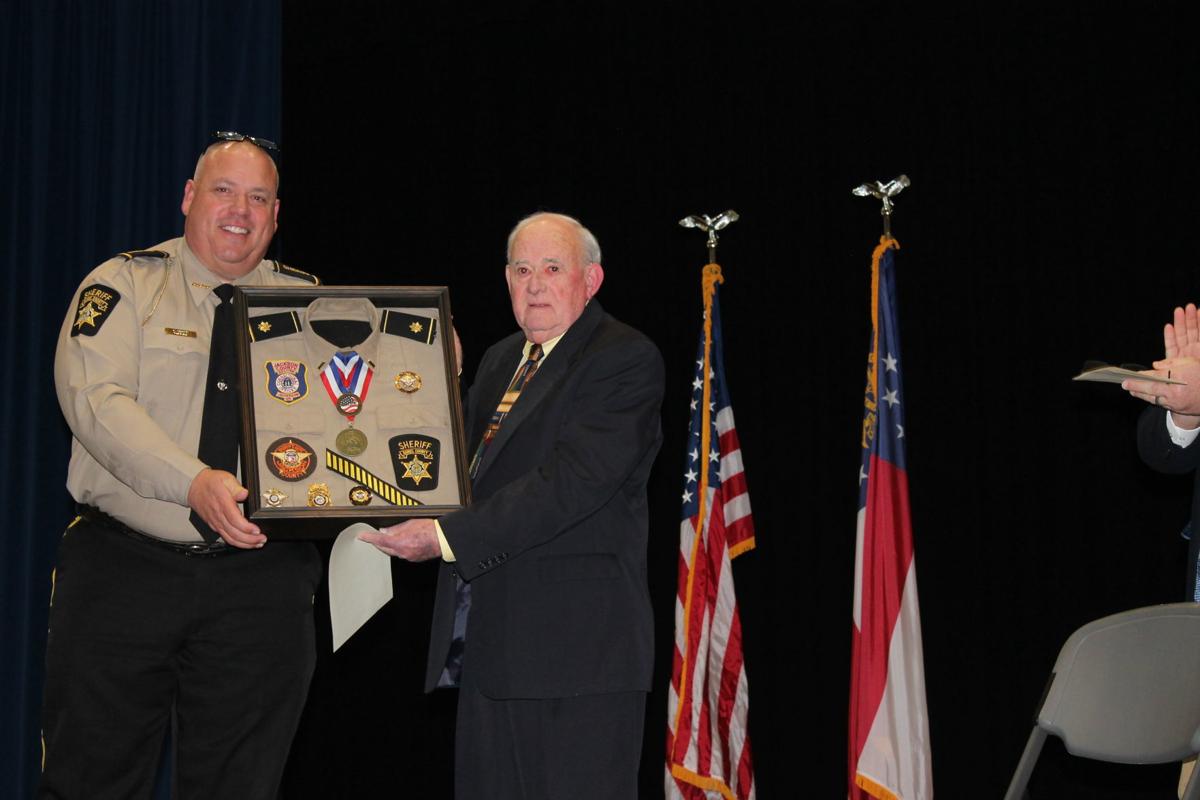 Ken Mize (R) is shown with Banks County Sheriff Carlton Speed as he is presented with a shadow box to commemorate his retirement from law enforcement after 52 years of service. 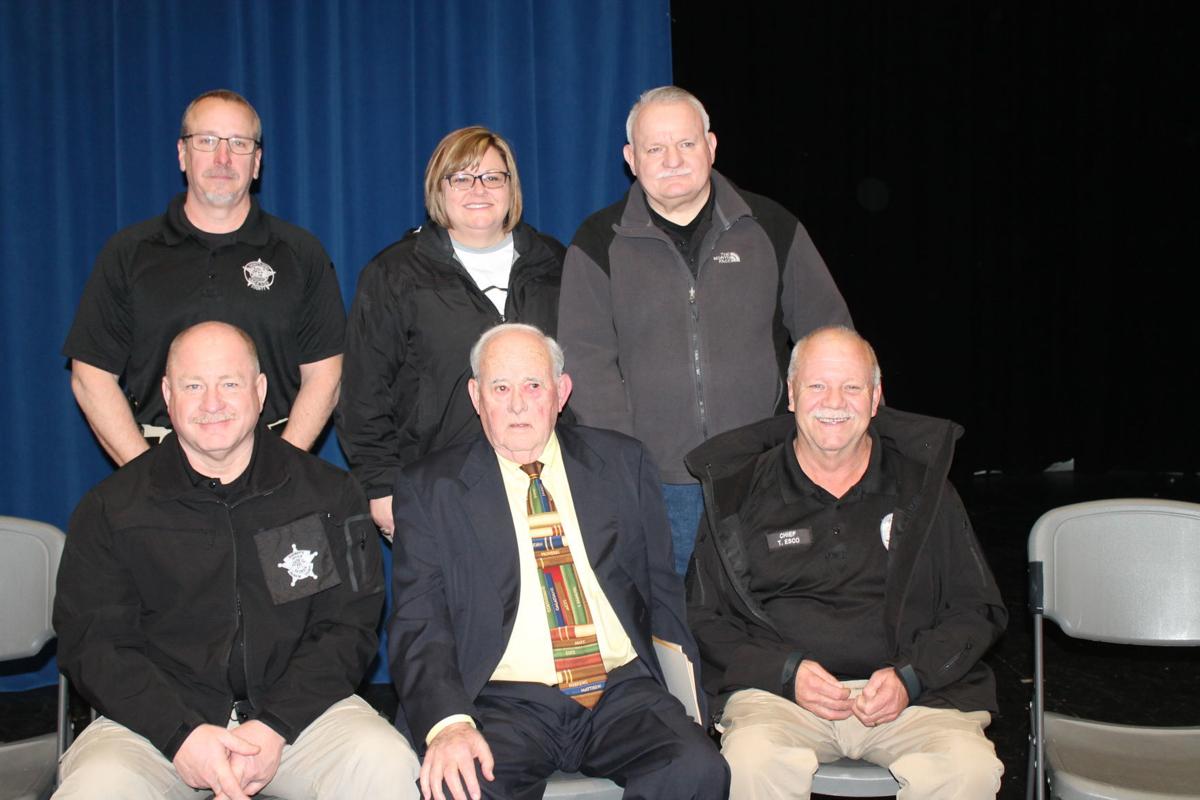 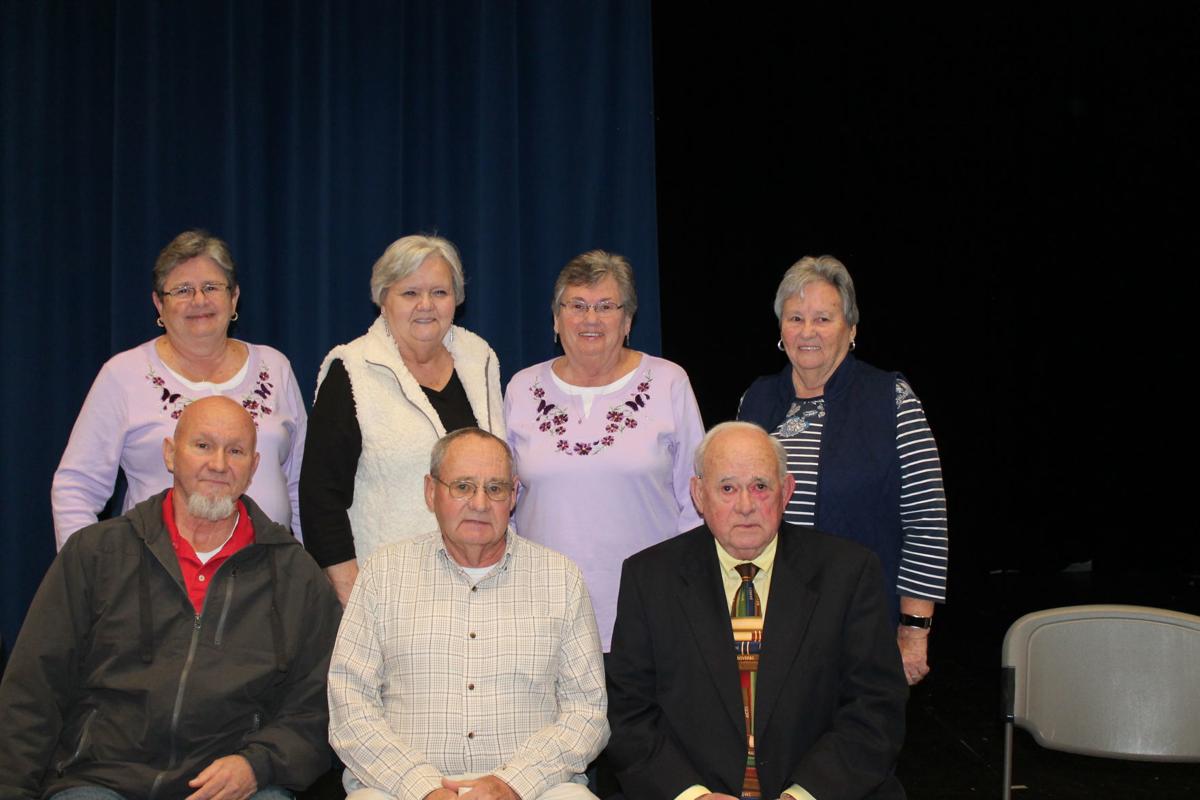 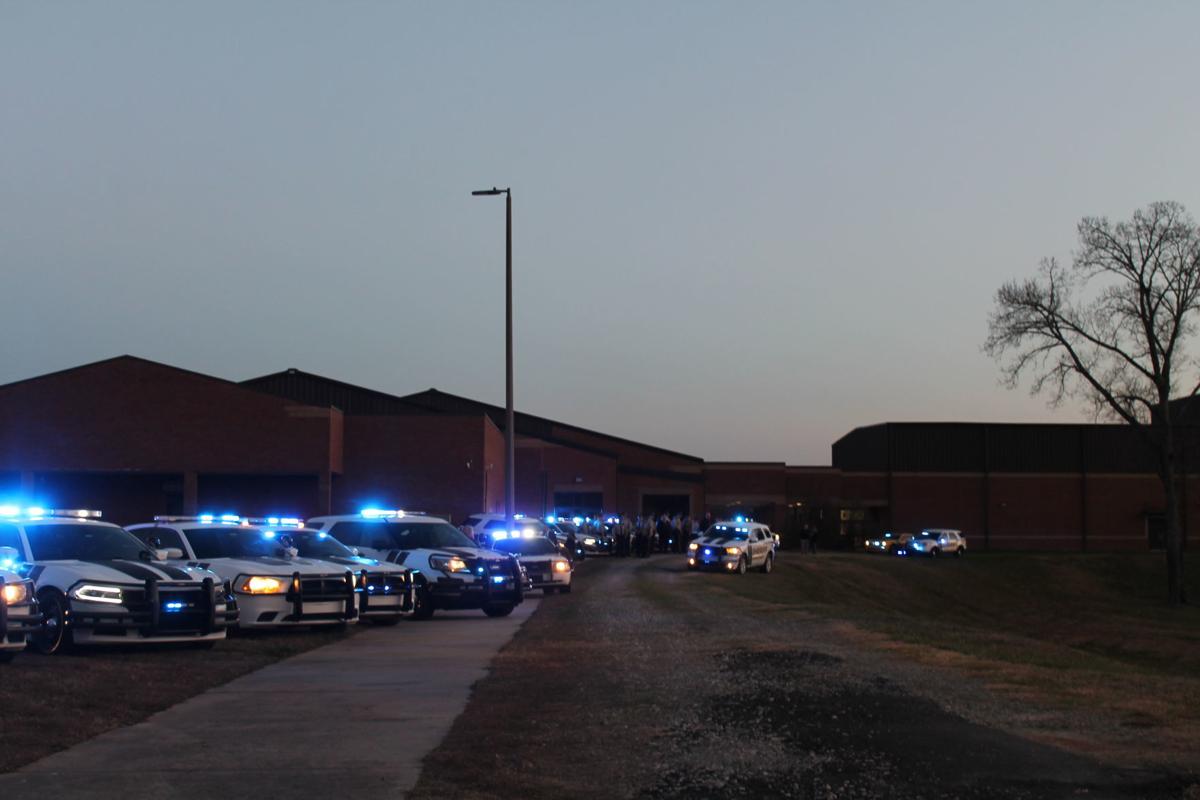 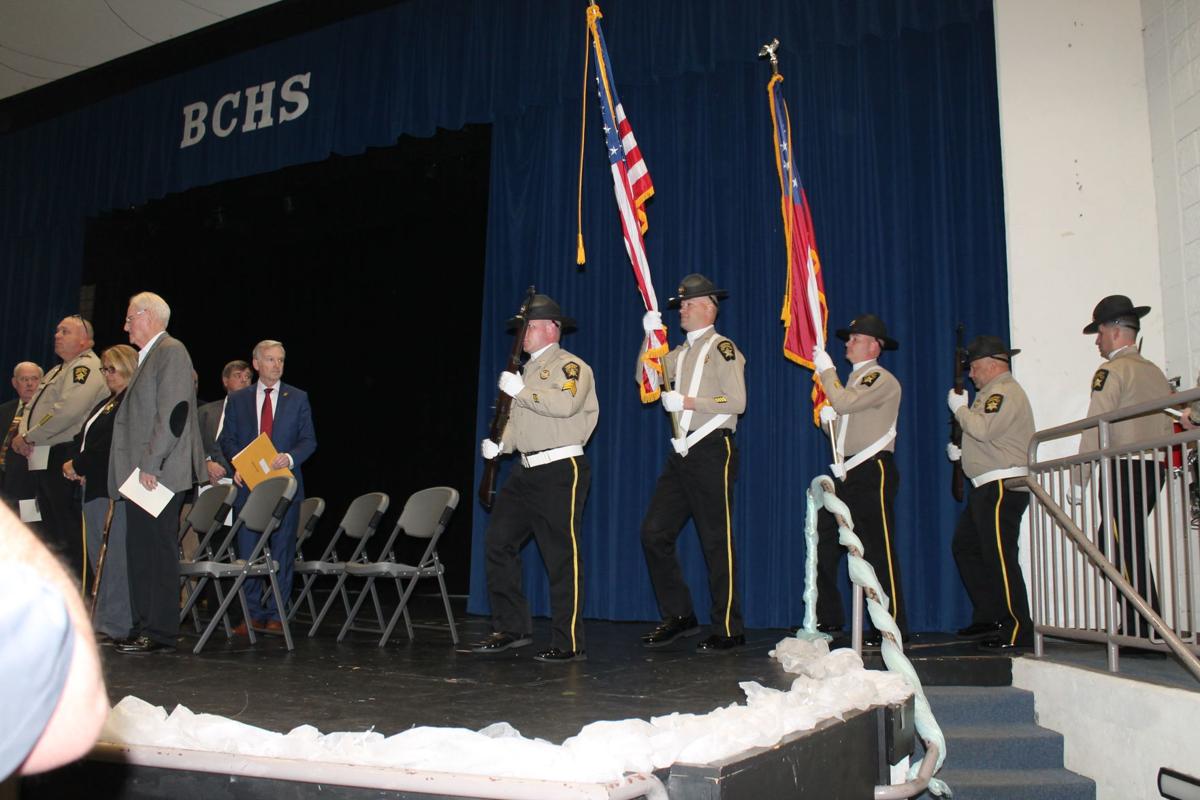 The newly-formed Banks County Sheriff’s Office Honor Guard members presented the colors at the retirement celebration for Ken Mize on Jan. 30. This was the group’s first official function. 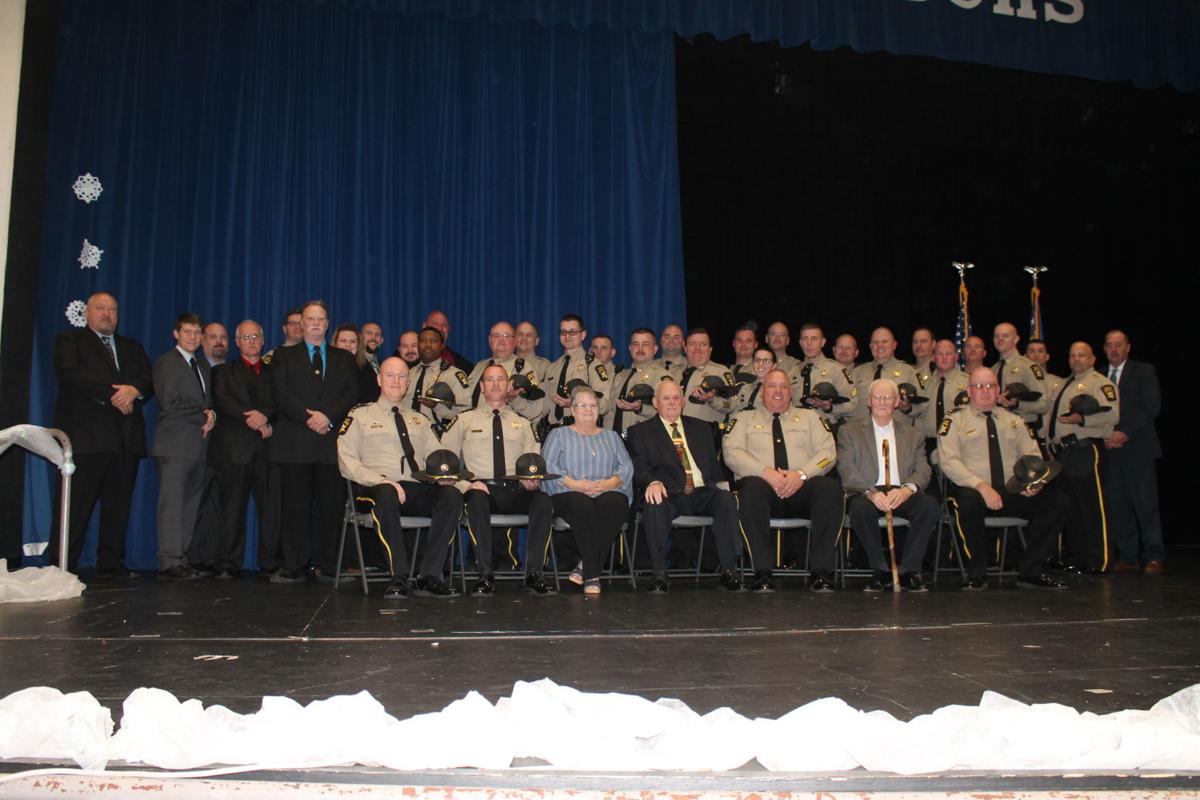 Banks County Sheriff’s Office personnel are shown with Ret. Major Ken Mize and his wife Cathy during the retirement ceremony on Jan. 30. 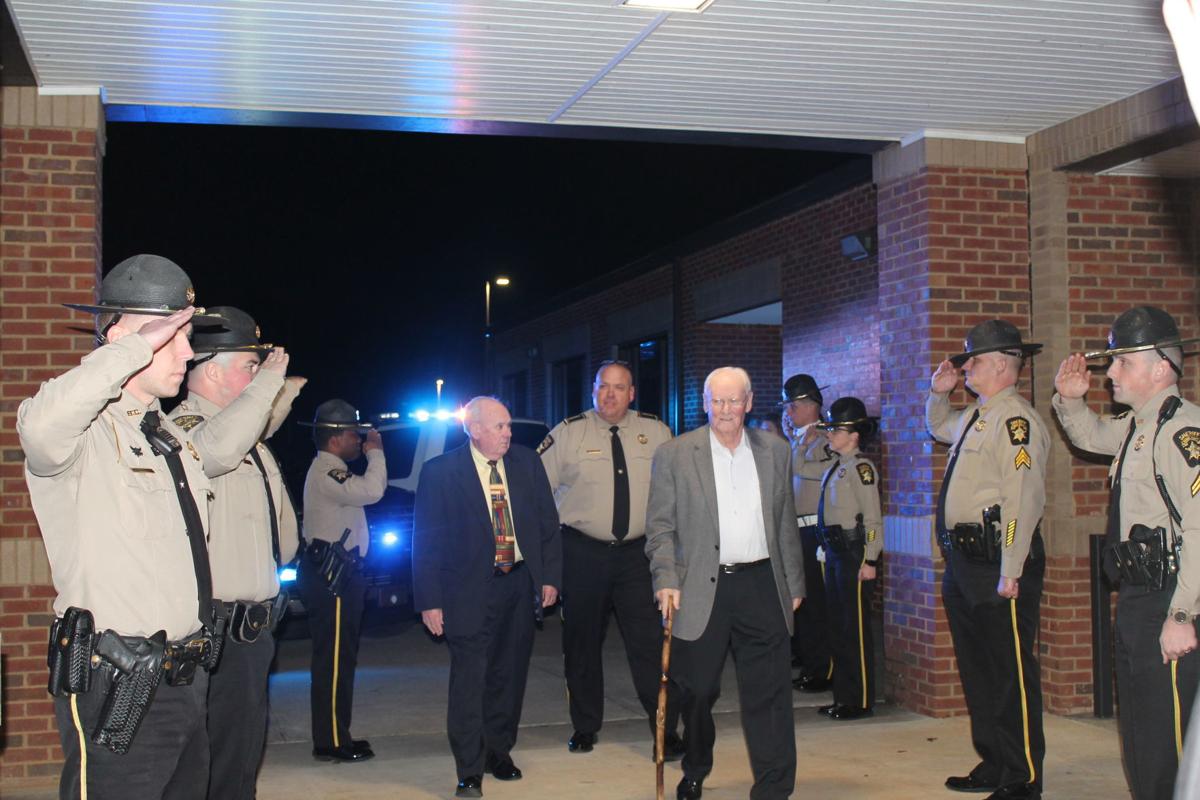 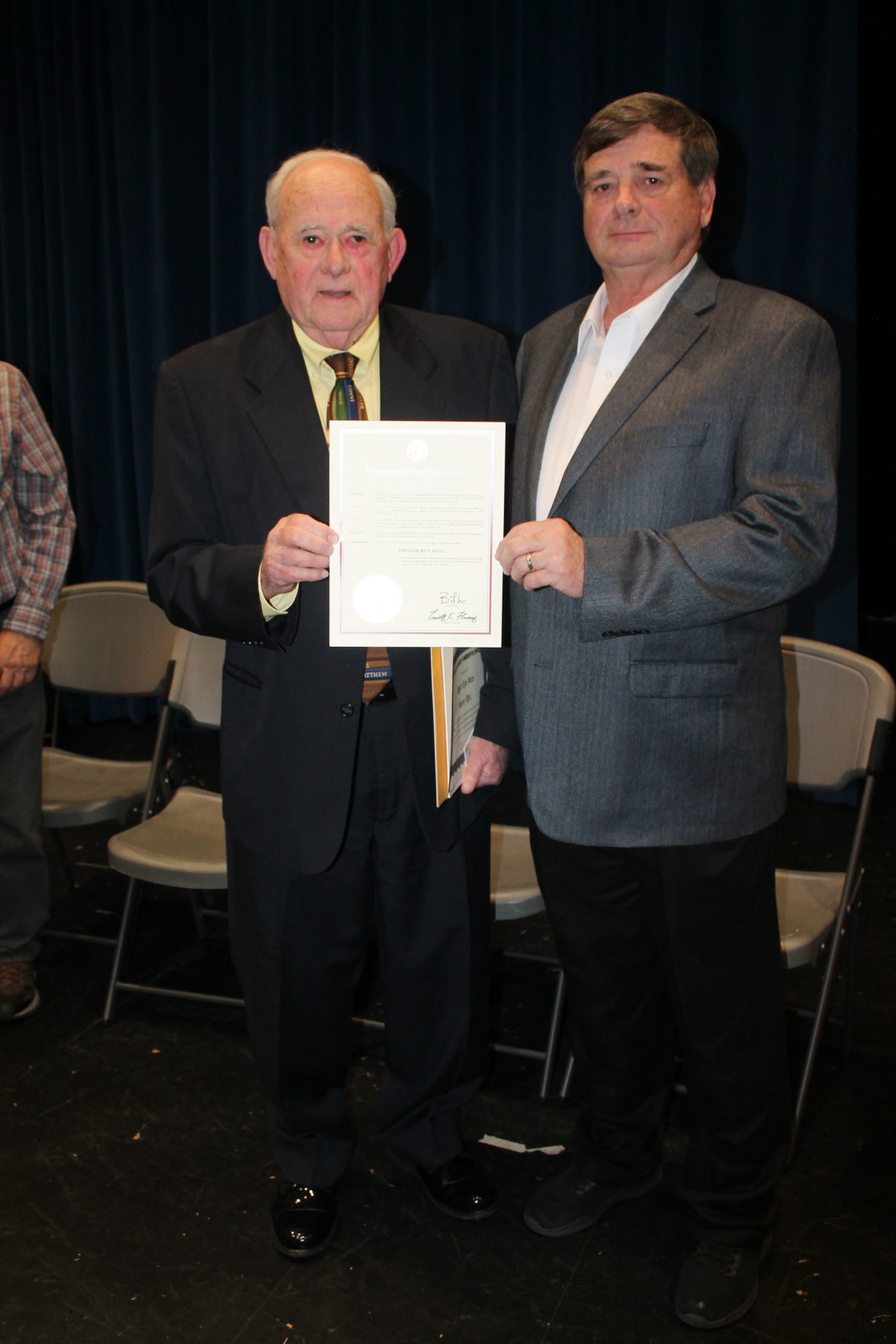 Ret. Major Ken Mize (L) is shown with his cousin, Bobby Banks, as he is presented with a commendation from Gov. Brian Kemp. 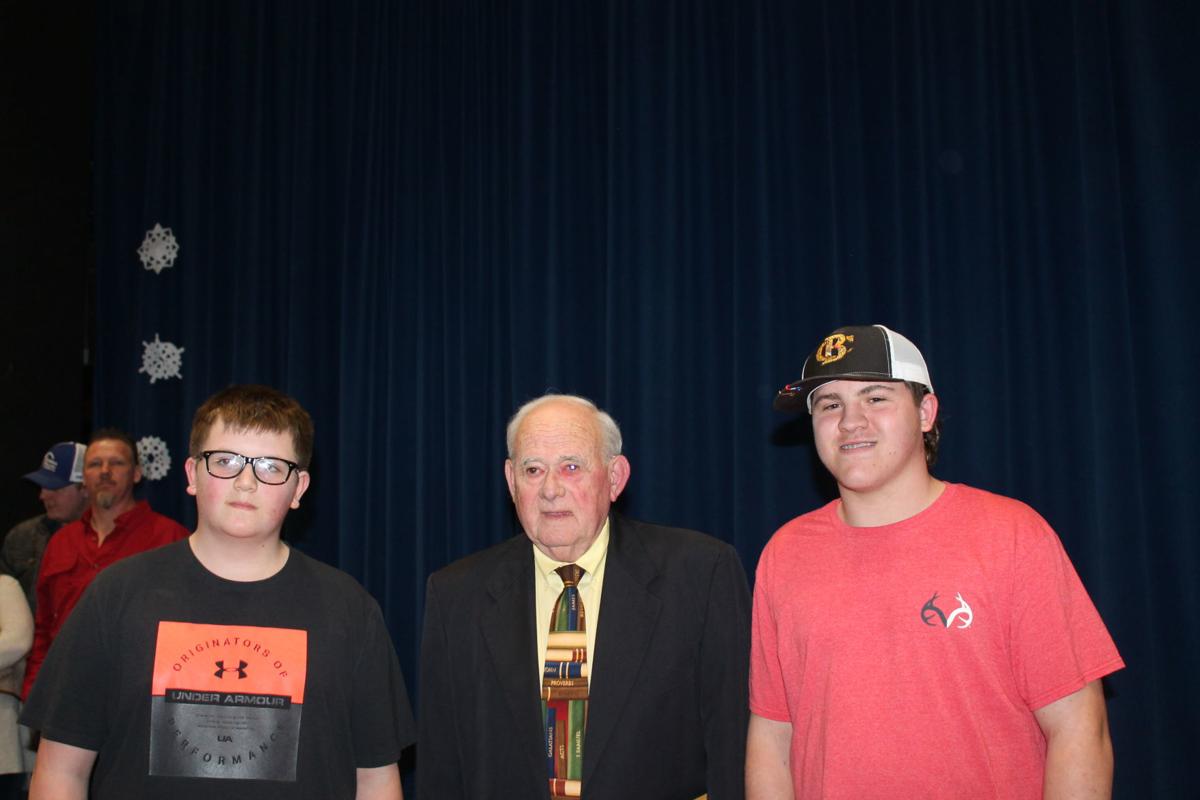 Ken Mize (C) is shown with two students he taught in the Banks County School system. They are: Jacob Osborn (L) and Cody Rucker (R). 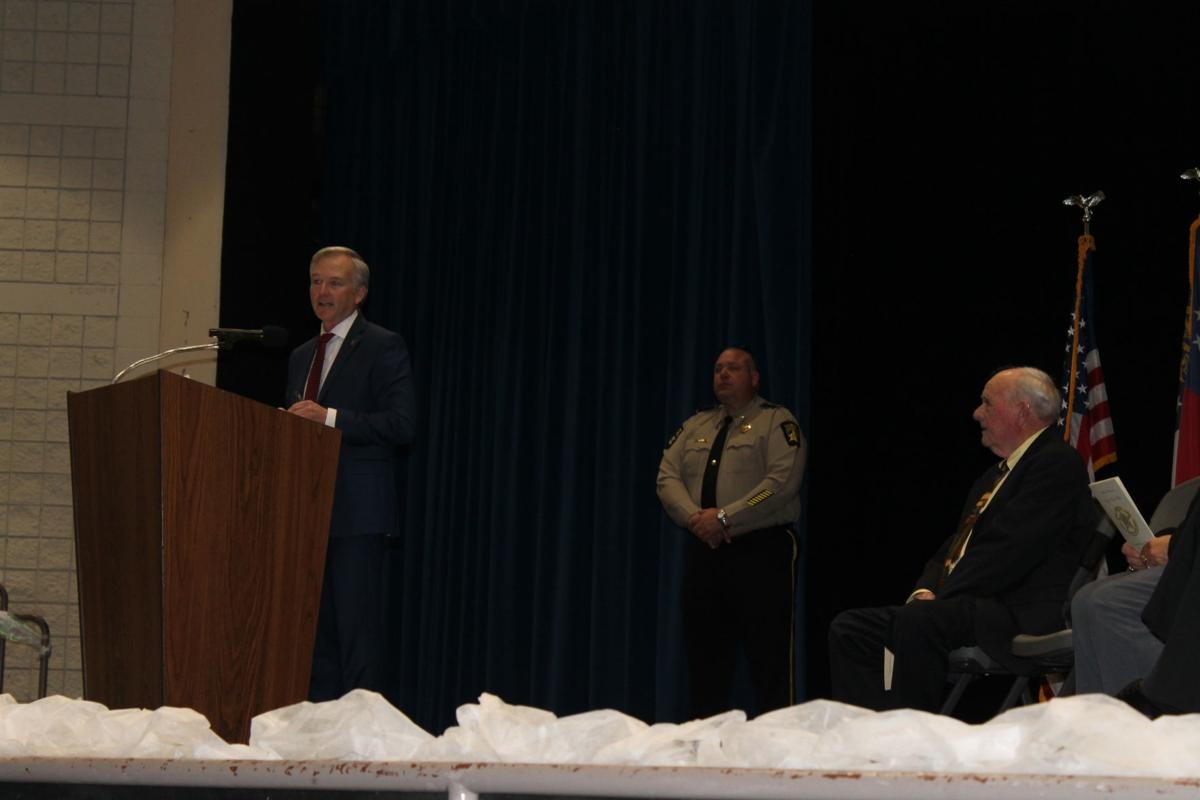 Ken Mize (R) is shown with Banks County Sheriff Carlton Speed as he is presented with a shadow box to commemorate his retirement from law enforcement after 52 years of service.

The newly-formed Banks County Sheriff’s Office Honor Guard members presented the colors at the retirement celebration for Ken Mize on Jan. 30. This was the group’s first official function.

Banks County Sheriff’s Office personnel are shown with Ret. Major Ken Mize and his wife Cathy during the retirement ceremony on Jan. 30.

Ret. Major Ken Mize (L) is shown with his cousin, Bobby Banks, as he is presented with a commendation from Gov. Brian Kemp.

Ken Mize (C) is shown with two students he taught in the Banks County School system. They are: Jacob Osborn (L) and Cody Rucker (R).

After more than half a century spent serving and protecting, Roger "Ken" Mize was honored by the Banks County Sheriff’s Office on his retirement at a reception on Jan. 30.

The retirement celebration was held in the Banks County High School Auditorium with a large group of family, fellow first responders, community members, friends and former students in attendance.

Mize, 79, was born in 1940 in Jackson County and started his law enforcement career in 1968. He worked with the Jefferson Police Department under former chief Albert Westmoreland, the Jackson County Correctional Institute as warden for one year, the Jackson County Sheriff’s Office under former Sheriff Stan Evans and the Banks County Sheriff’s Office under the direction of former Sheriff Charles Chapman and current Sheriff Carlton Speed. During his time in law enforcement, Mize worked his way through the ranks of patrol, corrections and investigations.

Mize spent 26 years of his career with the BCSO. He spent over 30 years of his law enforcement career working with youth in the Drug Abuse Resistance Education (D.A.R.E.) and Choosing Healthy Activities and Methods Promoting Safety (C.H.A.M.P.S.) programs.

“Ken Mize is a man that had a heart for the community he served,” Speed said.

“When you talk about Ken Mize, you talk about integrity," Speed said. "You talk about a man when he came in every day, he had a smile on his face. He walked around with a skip in his step and he never met a stranger. Every child at the Banks County School System knew Mr. Mize."

Speed said parents told him frequently how their children wanted to give Mize a fist bump or high five while he was directing traffic in the area of Banks County Primary School and Banks County Elementary School on Hwy. 51.

Former Banks County Sheriff Charles Chapman and Jackson County Sheriff Janis Mangum spoke about Mize’s servant heart. “He was there for whatever you needed him to do,” Mangum said.

Mangum said she worked with Mize for 20-plus years and he was truly a man with a servant’s heart.

“He touches my heart," she added.

Magnum said she started working with Mize and his wife, Kathy, in 1985 and Mize stayed with the JCSO for 20-plus years.

Chapman said having Mize in his role at the school was a “great relief off my mind.”

“All the students loved him to death,” Chapman said. “His heart was in his job.”

State Representative for District 28 Chris Erwin, who formerly served as superintendent of the Banks County School System, presented Georgia Legislature Resolution 998, registered at the Capitol on Jan. 30, honoring Mize. Erwin, praised Mize for his work with children over 26 years.

Part of the resolution read: "Whereas, his inspiring commitment to the welfare of others is an outstanding example of the positive effect law enforcement professionals have on the lives and well-being of others."

“I got blessed for 11 years here in Banks County as school superintendent to work with this gentleman and to see very day what he did in the lives of the children that he touched and the passion he had for teaching young people the difference in right and wrong, and then how to be safe, in the programs that he worked with,” Erwin said.

Erwin said Mize was a role model and had a calming effect as he walked the halls (at the schools), at the board meetings, at ballgames and other functions.

Bobby Banks, cousin to Mize, presented a commendation from Georgia Governor Brian Kemp recognizing Mize for his work with over 32,000 students in the D.A.R.E. program and over 1,400 in the C.H.A.M.P.S. program.

Sheriff Speed said, “Every student in the Banks County schools knew Ken Mize. They all recognized him”

During Sheriff Speed’s presentation to Mize of a shadow box constructed by Major Matt Allen of the BCSO, he announced that Mize was being ceremonially promoted to the rank of Major.

“He will retire as Major Ken Mize,” Speed said.

Mize said he loved his work with the youth in both D.A.R.E. and C.H.A.M.P.S. programs.

Mize said he was blessed in his career. He gave the credit for success in working with the students to his faith in God.

“I cannot complain one minute about the people that I worked for as far as the leadership that was in the departments that I was in,” Mize said. “I’m truthful, they were wonderful, wonderful kids. And it made me a wonderful person because I listened to them, I cried with them, I talked to them. Everything was so wonderful. I am so thankful today that I can say is has been good- it’s been a long journey, but it’s been good. I tried to do whatever I could to put a smile on their face."

That was a time to help the kids, Mize added, to do anything you could to lead them in the right direction.

In closing out the ceremony, Mize picked up his portable radio and signed off for the last time, saying, “I give you my last out of service and God bless all of you.”

“Major Mize, on behalf of Banks County Public Safety, we thank you for your years of service," she said. "You are a true man of God and you have been an asset to the Banks and Jackson County citizens. On behalf of 911 and, as your granddaughter, it was a true honor working alongside you…Thank you and we love you, Papa. Dispatch is clear. 873 is out of service on Jan. 30, 2020, at 7:33 p.m.”