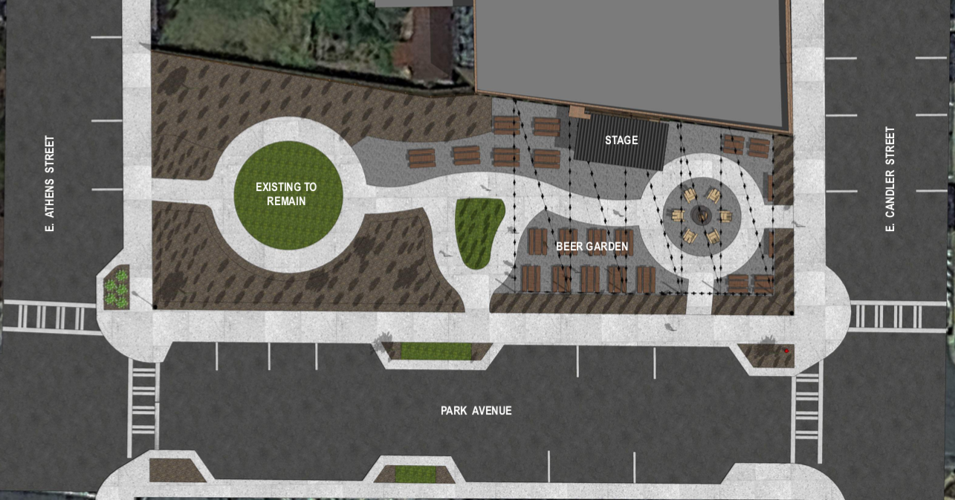 Socius Beer Collective, LLC., the owner of the building that will soon house Winder’s Daybreak Brewing Company, is set to acquire ownership of Hal Jackson Park and incorporate it into it its site plans as it moves into its construction phase.

Winder City Council gave the green light to Mayor David Maynard to sign the necessary documents authorizing the transfer of Hal Jackson Park to Socius in a unanimous vote during the council’s voting session June 7.

The City of Winder will first sign the agreement to the Downtown Development Authority with the direction to transfer it to Socius once the terms of the agreement are met.

According to Winder's city attorney, John Stell, the transfer will happen only when Socius reaches a certain point in construction. Once a threshold is defined and met, a deed restriction will be put into place requiring the park to remain open to the public, even when the brewery is closed for business. Once in place, Socius will assume liability and ultimately own the property, said Stell.

Socius is made up of three partners: Chuck Spinks, John Reynolds and Marty Mazzawai, who together own the downtown historic building at 57 Candler Street, which will soon become Winder's first brewery.

Since the earliest stages of the project, Reynolds and his partners at Socius have remained adamant about incorporating a beer garden into the site plan.

"Having a beer garden is a big deal for our business," he said, “it’s a big part of what made the Lawrenceville location such a success.”

With Hal Jackson Park as part of the site plan, the brewery will be better able to provide live music, fire pits, seeding and other recreational additions to the overall aesthetic of the space.

The Socius team plans to “reactivate” the park to serve its guests as well as the community at large. "We want to do our part for the city," said Reynolds.

The demolition phase of the project was recently completed, which included a demolition of the building's floor, which was holding the building's walls up. As a result, the team had concerns about the building collapsing. As a precaution, Socius has fenced off Hal Jackson Park until the safety risk is no longer a concern.

By the end of the demolition phase, the far right of the building's roof was demolished, as well as the two-story section of the building next to the park.

With demolition and site plans complete, the next step in the development process is construction approval.

"The whole process for us so far has been planning and engineering, which both take a long time," said Reynolds.

Socius created its own brewing program, Socius Spirit Collective, which is made up of local brewers, including Three Taverns in Decatur, Monday Night in Atlanta, Outrun in Stone Mountain and Slow Pour in Lawrenceville.

Equipped with the experience of more seasoned and successful breweries in the Atlanta area, the brewing program in Winder "has got a real head start," said Reynolds, "we're excited to bring it to the City of Winder and make Daybreak Winder's home brewery."

“The beers will be unique to Winder,” he said.

Similar to Slow Pour’s Victorian theme and Out Run’s 1980’s theme, or “personality,” according to Reynolds, Winder’s Daybreak Brewery will also eventually acquire its own unique identity, which the Socius team is still brainstorming as the project progresses and the triad spends more time getting to know the city and its locals.

For now, Reynolds estimates another solid year of construction before an opening date can be decided.

“We’ve taken our time with this, and we think we have a pretty amazing space planned," he said.

"We just really want to make sure we get it right.”