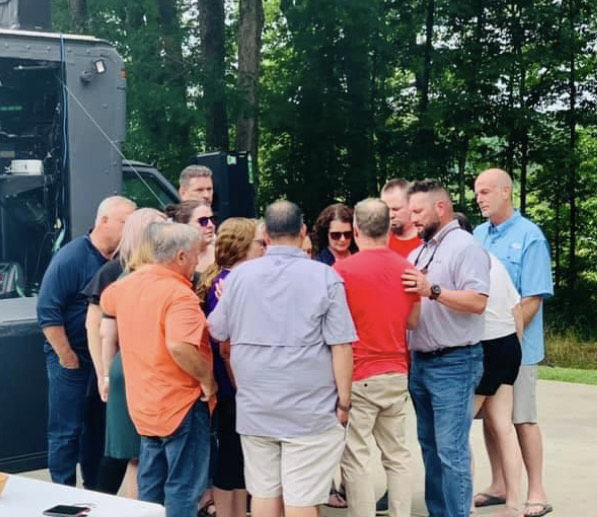 A prayer circle forms for Statham Elementary School paraprofessional Erika Wilson, who was diagnosed with stage 4 neuroendocrine cancer in March, during a benefit for the Wilson family held June 6 at Carter Hill Christian Church in Bethlehem. 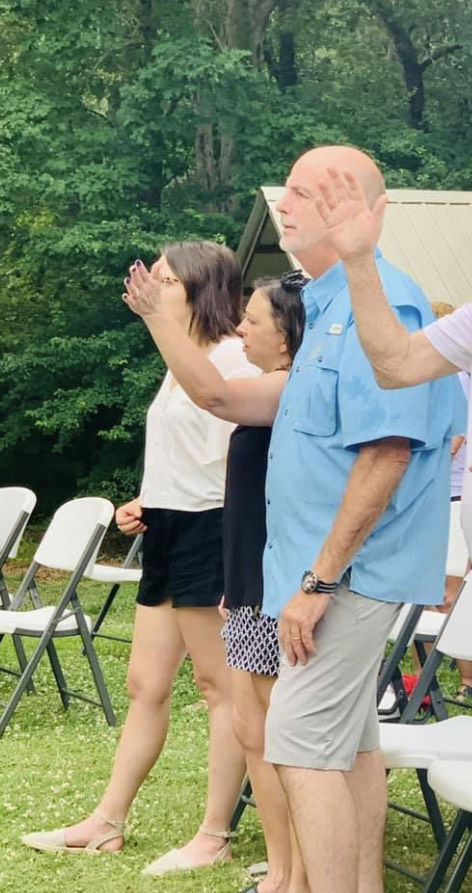 Erika Wilson (middle) is pictured at the benefit with her husband, Jon, and daughter, Carlee. 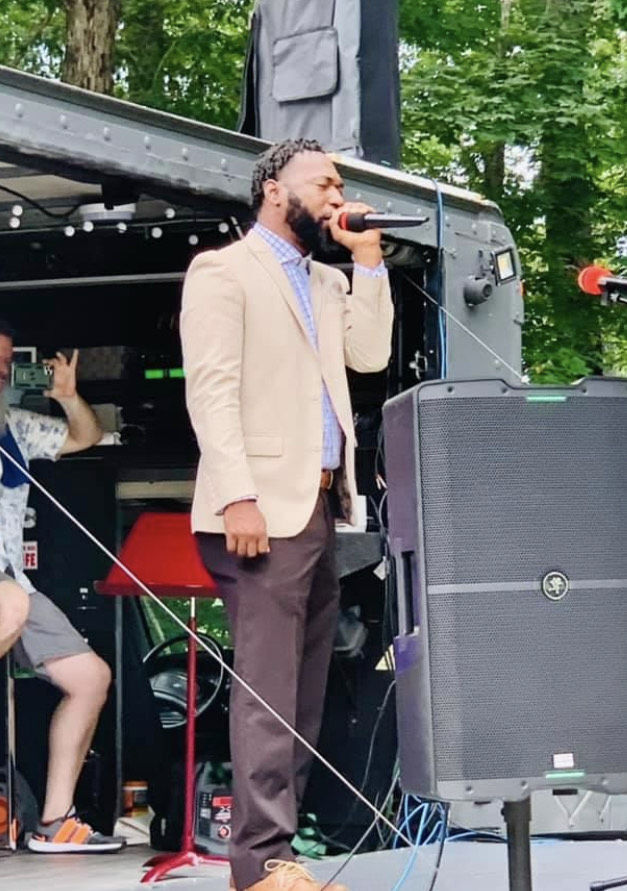 Pastor Walter Cleveland of Next Level Ministries speaks during the benefit. 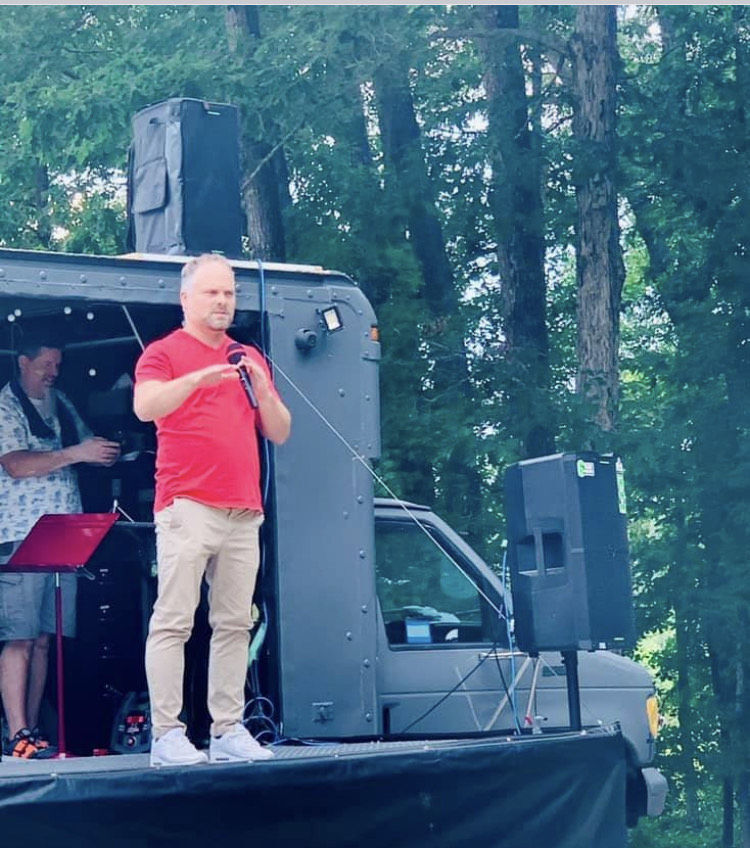 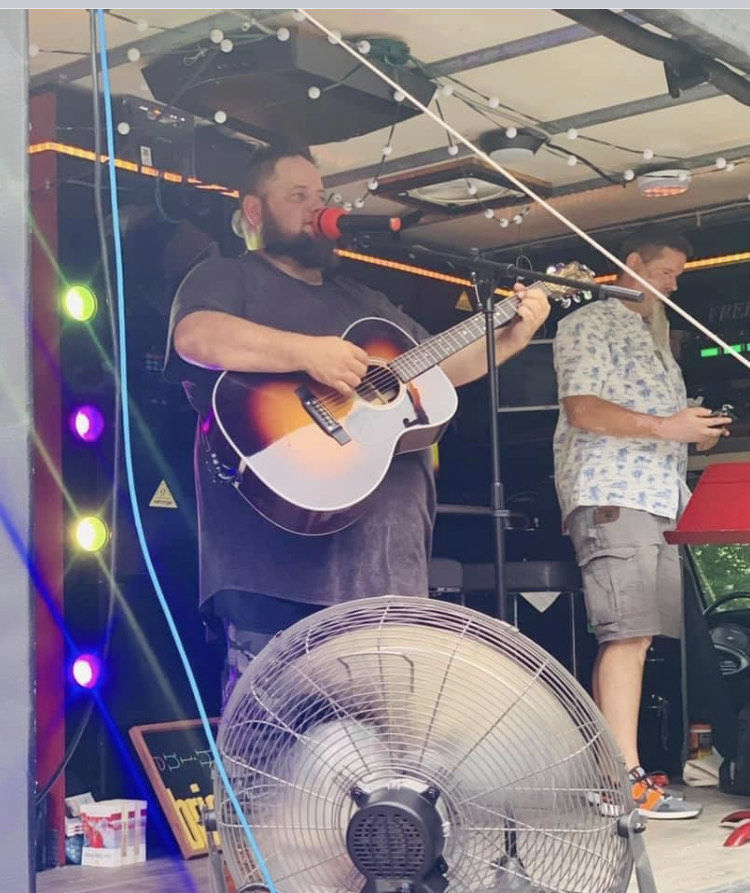 A prayer circle forms for Statham Elementary School paraprofessional Erika Wilson, who was diagnosed with stage 4 neuroendocrine cancer in March, during a benefit for the Wilson family held June 6 at Carter Hill Christian Church in Bethlehem.

Erika Wilson (middle) is pictured at the benefit with her husband, Jon, and daughter, Carlee.

Pastor Walter Cleveland of Next Level Ministries speaks during the benefit.

Throughout her life, Erika Wilson had been able to avoid any major surgeries other than an appendix removal she had when she was a young girl. So she was admittedly taken aback during a medical appointment in March when doctors found a mass on her small intestine and scheduled a procedure to remove it the next day to be biopsied.

A couple days later, Wilson, a paraprofessional at Statham Elementary School, was told she had stage 4 neuroendocrine cancer, a rare type of cancer in specialized cells that can occur anywhere in the body. A subsequent MRI revealed the cancer had metastasized to her liver, and she has experienced a flaring-up of lymph nodes in her esophagus and chest.

The stage 4 diagnosis is undoubtedly serious for Wilson, a Florida native who has lived in Barrow County for 22 years, 21 of those with her husband, Jon, and has worked for 10 years with the Barrow County School System. And she acknowledges the last three months have presented challenges for her and her family. But she remains in good spirits and has an optimistic outlook.

“It’s been really hard, but I’m getting through,” Wilson said last week, taking a timeout from writing a devotional to speak with The Barrow News-Journal. “I’ve got a lot of prayer warriors on my side and a lot of support from my friends and family.”

Wilson takes some comfort in knowing that doctors have a plan in place that could help her live a long, happy life. She is currently taking a growth-hormone shot used to fight neuroendocrine cancer with monthly doses at an outpatient clinic. The goal, Wilson said, is to stop the spread with the possibility of another surgery to remove some of it.

“When I was diagnosed, I did ask about the life expectancy, but the doctor did not want to really discuss that this early,” she said. “They’ve had good turnout with these shots where people have been on them for several years, and you can live a full life as long as the injections are working. If it doesn’t work, they’ll have to do more aggressive treatment like radiation or chemotherapy. But at this point, this is the best option.

“I am feeling hopeful that I will get healed from this rather through medical or divine ways.”

As anyone impacted by cancer would attest, the emotional and often financial tolls can be just as difficult to bare. But Wilson said she has felt the support behind her in a big way. The shots she receives are highly expensive, but she says she is fortunate enough to have health insurance through the school system, and she received help from fellow faculty and staff members at Statham Elementary, who took up love offerings for her and delivered food to her house.

“We didn’t have to cook or buy food for probably over two months, and they’ve brought me baskets with cleaning stuff and other things,” Wilson said of her colleagues. I just have a really great school family helping me out, and with their help I’ve been able to pay my deductible so I don’t have any huge bills coming at the moment.”

But the help didn’t stop with the school. Statham Elementary librarian Lisa Hendrix, a personal friend of Wilson, took her name to the congregation at Carter Hill Christian Church in Bethlehem to be put on a prayer list. That sparked an idea from Pastor Heath Kennedy at Carter Hill to help the Wilson family.

“If there’s any way we can help, that is our desire,” Kennedy said. “(Wilson) is such an encouragement to us.”

Wilson, who regularly attends another church, went to the benefit — which included guest pastors and singers — and said she was immediately embraced by the people at Carter Hill.

“I can’t say enough about Pastor Heath and his congregation. They’re absolutely amazing,” Wilson said. “I was just humbled to be at an event for me and my family and be thought of by so many people who did not know me. The week before the benefit, I went to church there to meet them. They had no clue I was coming, but I woke up that Sunday morning and felt led to go meet these wonderful people, and they received me with open arms.”

At the benefit, Wilson said, she was able to meet a man who has successfully battled stage 4 cancer and talk at length with him and his wife.

“He just wanted to share his testimony about what he’s been through and that you can get through,” Wilson said. “He gave me a lot of hope. And I just pray that I can have that opportunity one day as well to be able to share my testimony and give someone else some hope.”