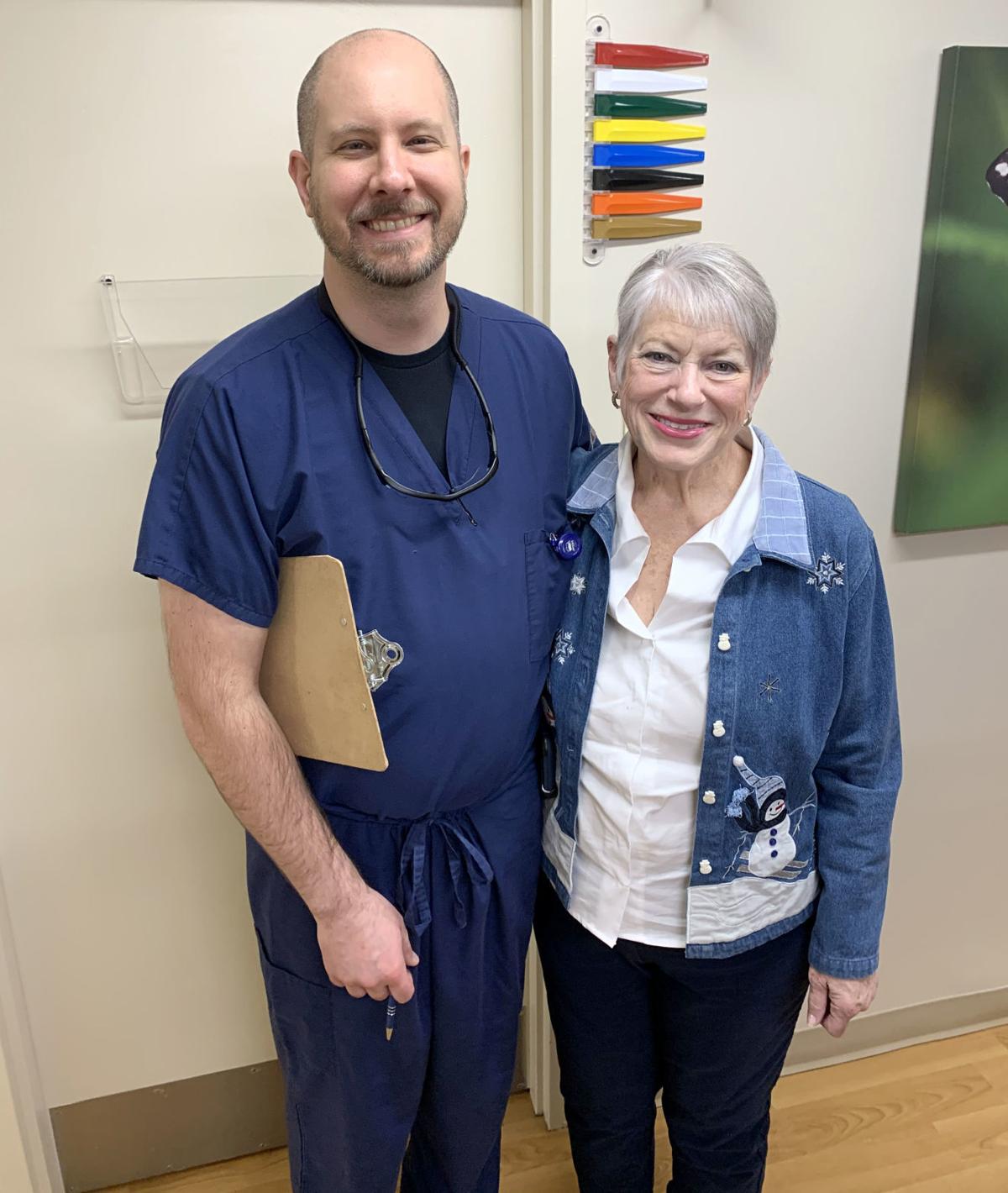 Winder resident Gwen Garner-Rouse is pictured with Dr. Nathan Creel, who performed life-saving surgery on her at Northeast Georgia Medical Center in Gainesville. 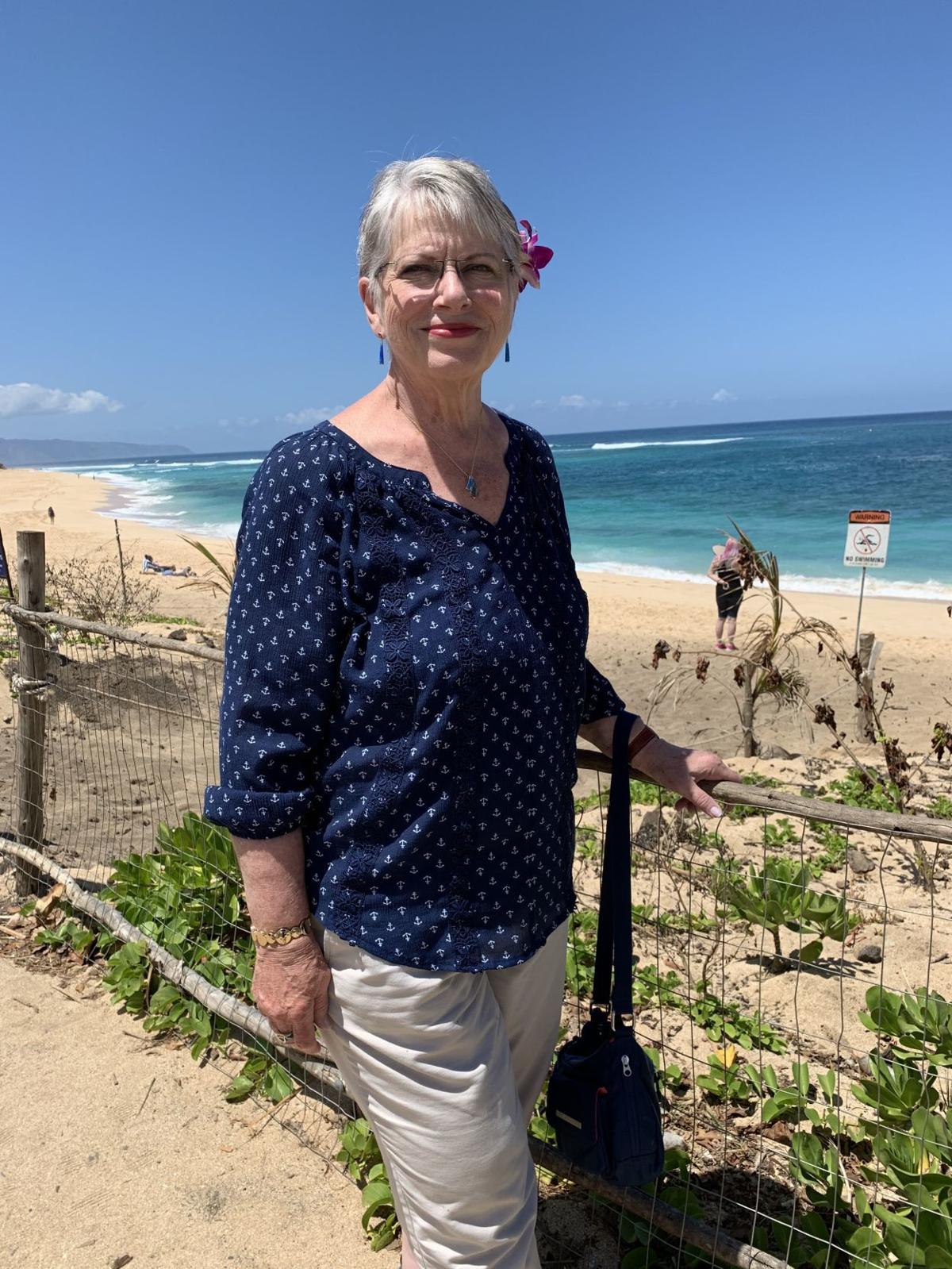 Garner-Rouse is pictured during a recent trip to Hawaii.

Winder resident Gwen Garner-Rouse is pictured with Dr. Nathan Creel, who performed life-saving surgery on her at Northeast Georgia Medical Center in Gainesville.

Garner-Rouse is pictured during a recent trip to Hawaii.

In September, the then 69-year-old retired college administrator suffered an aneurysm of her superior mesenteric artery (which supplies blood to much of the digestive tract) and was life-flighted to Northeast Georgia Medical Center (NGMC) in Gainesville, where she received life-saving surgery from Dr. Nathan Creel.

“I was in a coma for two weeks, and, as I was recuperating, I was told that 1.6 percent of people that have this survive it, and many of them that do end up on a ventilator or on dialysis,” said Garner-Rouse, a Winder resident who is now fully recovered from the event, despite suffering a bleed that required 100 units of blood products following the aneurysm. “I’m O-negative, and they gave me so much O-positive during the night that it actually changed my blood type temporarily.”

Perhaps paramount in Garner-Rouse’s recovery, however, was a decision she made in the spring of 2018.

Prior to then, Garner-Rouse suffered from obesity and several complications brought on by the condition — sleep apnea, back pain and high blood pressure amongst them. And following years of yo-yo diets, exercise regimens and the psychological effects of battling weight issues, Garner-Rouse took the advice of her doctor and looked into bariatric surgery.

It was a voyage of discovery that culminated in gastric bypass surgery, performed by Dr. Miguel B. del Mazo of the Longstreet Clinic’s Center for Weight Management.

It was a decision that, ultimately, saved her life on that fall night in 2019.

“Dr. Creel told me that he had about two minutes to save my life, and that if I had still been obese when this happened that he might not have been able to find the source of the bleeding,” Garner-Rouse said.

Thanks to the gastric bypass, and a determined post-operation regimen, Garner-Rouse had lost over 150 pounds in almost 18 months, enabling Creel to work quickly and more efficiently on a patient that he knew faced a perilous situation. To date, Garner-Rouse has lost 170 pounds.

“Obesity multiplies all kinds of complications in the ICU and in post-operation recovery,” Creel said. “It’s called ‘morbid obesity,’ for a reason. And the fact that she had lost all that weight made a huge difference for her outcome. It was a difficult surgery, and a lot of things came together for her in a good way.”

Even after researching bariatric weight loss, learning that she was an ideal candidate for the gastric bypass and being very impressed with Dr. del Mazo and the Longstreet Clinic staff, Garner-Rouse was not 100 percent sold on pursuing surgery — until an interaction with a grandchild changed her mind.

“My grandson asked me if I was OK, and if I could do something to get healthier. That got my attention. And I eventually had surgery,” said Garner-Rouse, who underwent gastric bypass on April 2, 2018, also at NGMC Gainesville.

It was the start of a transformation in Garner-Rouse’s life, as the weight seemingly melted away. The changes in her body allowed Garner-Rouse to spend much of 2019 on the go, enjoying several trips, highlighted by a vacation to Hawaii where she renewed her wedding vows with her husband, Rich, on Waikiki Beach. The adventure also featured hiking, helicopter rides, jeep tours and even a motorcycle jaunt — pleasures, she said, that would have been physically impossible without weight loss.

“Bariatric surgery was ideal for her in her situation,” del Mazo said of Garner-Rouse. “I only wish I’d met her years ago. And, once she decided she was going to do it, she went out on her own and aggressively tried to figure out what she could do on her end. She’s always maintained a good attitude, and she brings a lot of passion to surgery and to her life. The key thing is not so much what you lose but what you gain from bariatric surgery. The bypass allowed Gwen to be more active with her family and do some incredible things.”

Despite her inner determination, Garner-Rouse kept the procedure hidden from all but a few family members.

“I didn’t want any naysayers or negativity,” Garner-Rouse said. “But now that people are learning what has happened to me, they’re nothing but positive. It started when I lost all that weight, but now it’s even more positive. The whole thing is pretty miraculous.”

So it was that a recovering Garner-Rouse celebrated her 70th birthday on Dec. 6, surrounded by family and friends — an observance that she cherished.

“I had family come in from everywhere, and I made sure we all had pictures done – I also have pictures of me with my heroes, Dr. del Mazo and Dr. Creel,” Garner-Rouse said. “I’ve never been treated so well by medical personnel like I have here, and I’m so thankful for all of the doctors, nurses and the graduate medical personnel, who helped attend to me during my aneurysm and so impressed me with their knowledge and care.”

For his part, Dr. del Mazo said he has also gained plenty of satisfaction from watching successes such as Garner-Rouse’s.

Garner-Rouse’s chronicle is set for plenty more in 2020.

“I have a little bit of PTSD from the whole aneurysm experience, but I’m dealing with that and getting better there, too. I’m also gradually phasing myself back into working with my husband, and I’m going to plan some more trips,” Garner-Rouse said. “We’re going to Orlando in February for a conference, but we’re also going to go to EPCOT, spend Valentine’s Day at Bok Tower, snorkel and then swim with dolphins — just enjoy ourselves, go be kids again.”

After all she’s experienced, Garner-Rouse certainly has reason to forget about her cares for a while and reflect on an incredible voyage.

“We include exercise and healthy eating into all our trips. This is a true lifestyle change and you have to remain diligent to maintain the changes,” Garner-Rouse said. “And I feel healthier and happier than ever before…The compliments don’t hurt either!”