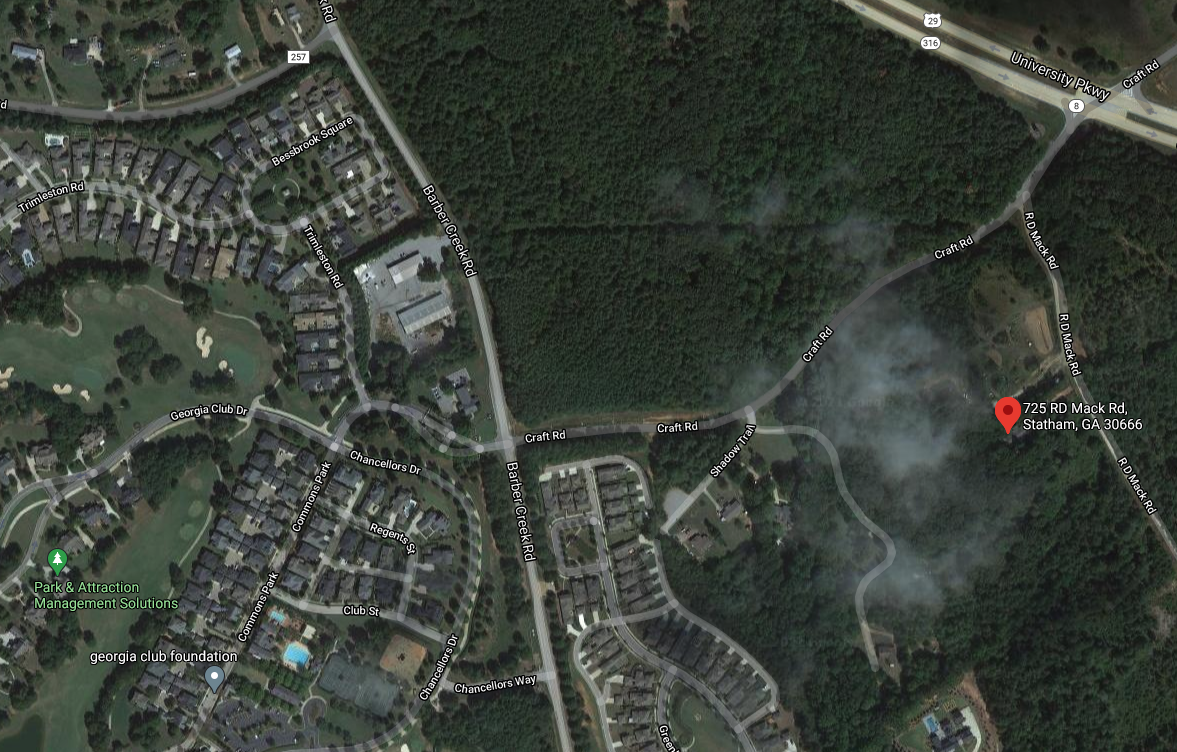 The Barrow County Board of Commissioners, on Feb. 9, approved a rezoning request that allows for an age-restricted subdivision with 27 single-family homes, 126 townhome/condominium units and 12-15 executive suites to be built at 725 R.D. Mack Rd., near The Georgia Club in Statham. 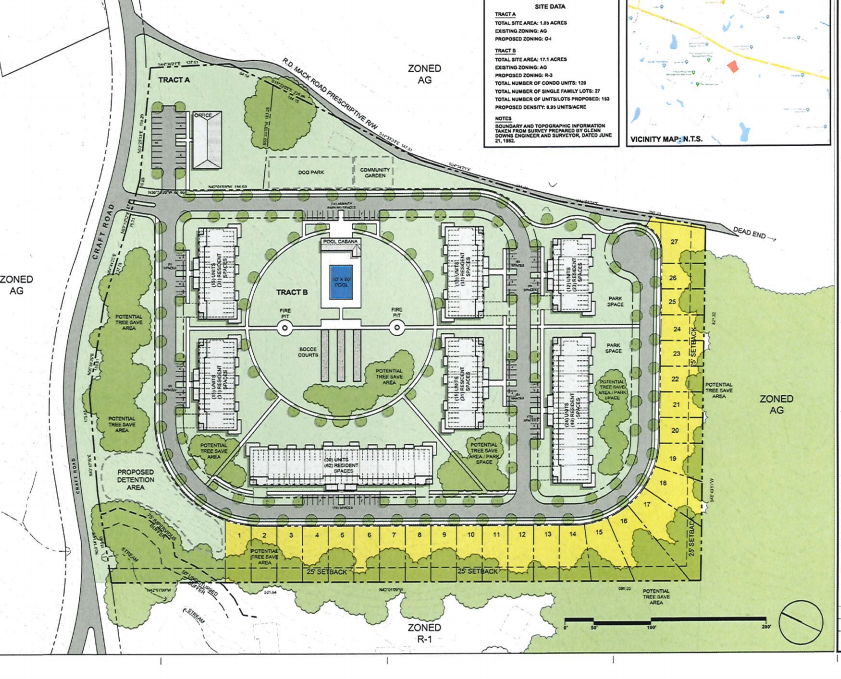 A site plan for the proposed project on R.D. Mack Road is seen.

The Barrow County Board of Commissioners, on Feb. 9, approved a rezoning request that allows for an age-restricted subdivision with 27 single-family homes, 126 townhome/condominium units and 12-15 executive suites to be built at 725 R.D. Mack Rd., near The Georgia Club in Statham.

A site plan for the proposed project on R.D. Mack Road is seen.

A planned age-restricted subdivision with “high-end” single-family homes, condominiums and executive office suites near The Georgia Club in Statham has cleared a county zoning hurdle despite the objections of numerous Georgia Club residents.

At its Feb. 9 voting session, the Barrow County Board of Commissioners approved a request by Solstice Partners to rezone and change the county future land-use map designation for 18.2 acres at 725 R.D. Mack Rd. The zoning and map changes will allow the developers to construct 27 single-family homes and 126 townhome/condo units. An office building will be constructed at the front of the property and will house 12-15 offices, which will be targeted toward future residents of the development to work out of, John Stell, the attorney representing the applicants, said. The development would also include recreational amenities — including a heated pool, bocce court and dog park, Stell said.

The BOC’s conditions for approval include a mandatory homeowners’ association, which will be required to own and maintain streets within the subdivision and adopt covenants that will include a stipulation that at least one person in each home be age 55 or older.

The request has been before the BOC since November after the planning commission recommended approval in October. A public hearing was delayed in November and December at the primary applicant’s request due to a health issue and then again last month by the BOC due coronavirus precautions.

Tom Valdes, the primary applicant, serves as president of The Georgia Club Real Estate Company, and Solstice Partners served as the management and design team for The Georgia Club for more than a decade.

While this development would not be tied to The Georgia Club, Stell has said it would be a “very high-quality project” built to the same standards. He said the homes would be priced in the high $400,000s to low $500,000s and the condos would have high-end interior finishes that would drive their value up.

The project has been endorsed by the Barrow County School System, which has rarely voiced support for proposed residential developments that have come before the county in recent years. Stell said the project would represent a $72 million investment and generate an estimated $880,000 in county property-tax revenue a year, based on current millage rates, “with little to no impact on the schools or county road system.”

“The bang for the buck here is tremendous,” Stell said.

But the project has drawn significant pushback from residents of The Georgia Club who worry about the additional traffic the development will put on Craft Road, the primary road between The Georgia Club and State Route 316, and the effect it could have on an already-risky intersection.

Jeff DeLoach, a Watkinsville attorney representing several of the Georgia Club homeowners, said they did not object to the property owner selling his land to be developed but that they do not believe the request is compatible with the future land-use map.

“You should be hesitant to approve this request,” DeLoach told the board, adding that approval “opens up the entire south side (of Highway 316) to this type of request.”

DeLoach said the board did not have “all the information” it needed to approve the request without a traffic study to account for the “dramatic increase” of traffic on Craft Road. While the Georgia Department of Transportation plans to continually limit access onto 316 over the next decade — including a proposed flyover at Craft Road in 2025 or later — DeLoach said that does little to ease residents’ concerns in the interim.

“We can’t bet on future highway development that’s not in place,” DeLoach said. “Until the infrastructure is there to deal with the traffic, we request (the county not) put that many more cars on the road.”

But Stell rebutted that the character area change for the property was “entirely appropriate” and that it should have probably been included in the 316 Innovation Corridor to begin with.

Stell said a senior community would have less traffic impact on the road than a regular residential subdivision that could be built there under current zoning. He noted that The Georgia Club has taken 18 years to build out to 50-percent capacity, and while it still plans to add more than 450 homes to reach full buildout, construction has been slow in recent years.

Stell said the project on R.D. Mack Road would be “a complement, not a detriment” to The Georgia Club.

“Seniors at The Georgia Club (looking to downsize) can take advantage of this product. They can stay in Barrow County, close to their friends,” Stell said.

Commissioner Joe Goodman, who made the motion to approve the request, said he had received numerous emails about the project but that the county doesn’t “control the timeframe” on GDOT’s plans for 316.

“Any development (that comes before the county) is required to meet our guidelines in the road, planning, stormwater and other departments,” Goodman said.

Among the other business items at its Feb. 9 meeting, the BOC approved a change in zoning conditions for the Suttons Landing subdivision along Highway 53 to the west of Robertson Bridge Road that will allow the developer to scrap a planned assisted living facility, cut down on the number of planned townhomes and add more than 40 single-family detached homes to the subdivision.

The area behind the existing commercial uses of the development would be changed from 179 town homes to 20 town homes (12 of which already exist) and 29 additional single-family homes. The changes would result in an overall net reduction of 85 dwelling units, said Stell, who was representing applicant Kerala Gardens, LLC on the request.

Residents in the neighborhood have expressed frustrations with the developer for not moving faster on construction, which was initially slowed due to the 2008 economic downturn, and for not already constructing a promised recreational area. Like the planning commission, BOC members sympathized with the concerns but said they could only legally consider the zoning issue at hand.

“Whether or not a developer lives up to their commitments, I think, is a separate issue,” chairman Pat Graham said.

One of the conditions on the BOC’s approval was that the amenity area be built as shown on the original 2008 master plan. Dan Schultz, the county’s director of planning and community development, said that once subdivisions are developed to 50 percent capacity, amenities have to be available. The net reduction in units means those amenities have to come sooner, Graham said.

In other business, the BOC:

•approved a request by Ridgeline Land Planning and Manor Restorations to rezone 26 acres between State Route 316 and Tom Miller Road at Evergreen Road in order to build a conservation subdivision with 60 single-family houses and rezone and change the future land-use map for another 1.7 acres in order to build 9,700 square feet of office space.

•approved a memorandum of understanding between the county, Winder-Barrow Industrial Building Authority and Spring Mountain Center, the home and lifestyle products manufacturing company that has announced plans to build its manufacturing and distribution headquarters at the Park 53 industrial park at highways 316 and 53. The county has included several economic incentives in exchange for commitments from the company. The IBA will pay 50 percent of the county's standard development fee and issue up to $15 million in bonds for Phase 1, whereby the IBA will own the property and lease it back to the company. The company will also have a five-year tax abatement for each phase. The deal also includes a "clawback" provision, meaning that if the company does not follow through on at least 80 percent of its commitments (investment level, job creation and minimum guaranteed wage amount), it will have to pay back those tax breaks and fee waivers in full. In all, the company is pledging to bring 205 net jobs to Barrow County over the next five years with an average starting salary of $48,316 and invest $45 million in opening the headquarters. The first of three phases is expected to be complete, and the first 100 workers hired, by the end of 2022.