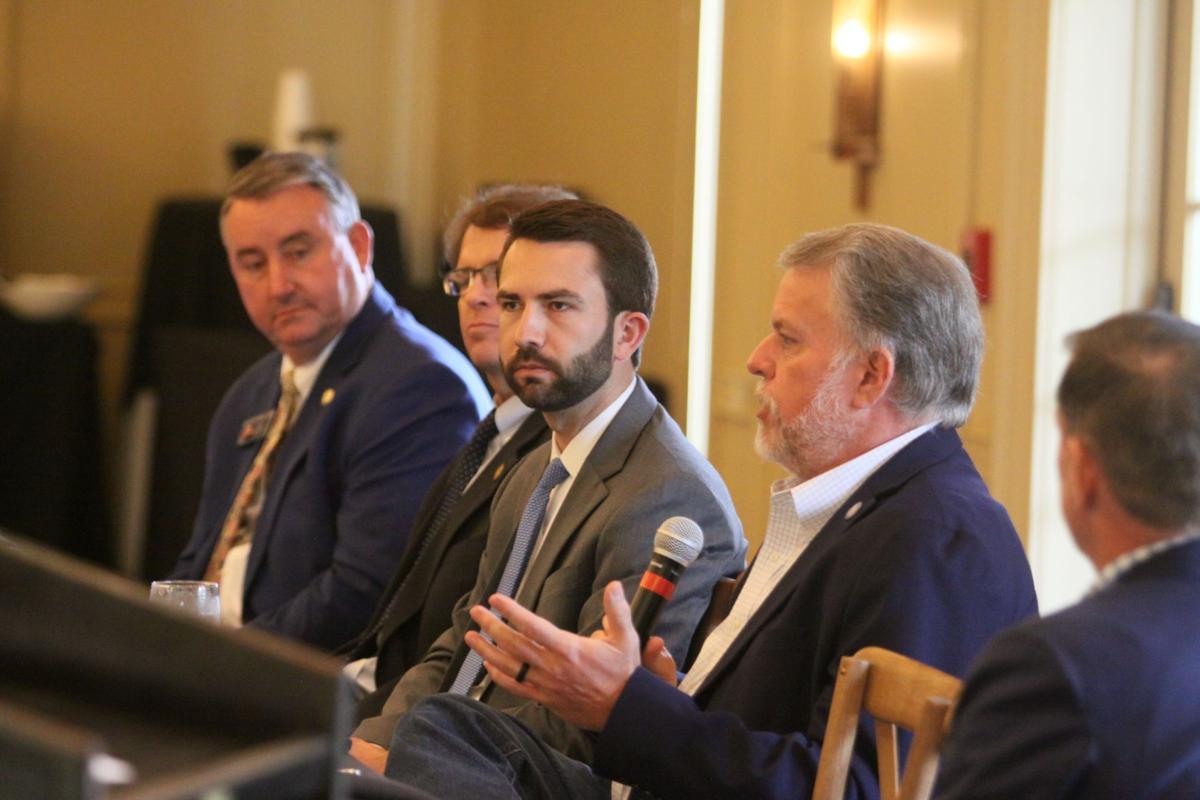 State Rep. Terry England (R-Auburn) speaks during a legislative luncheon June 3 that was hosted by the Barrow County, Oconee County and chambers of commerce at The Georgia Club in Statham. The forum, moderated by David Raynor, chief public affairs officer for the state chamber, also included remarks from state representatives Houston Gaines and Spencer Frye and state Sen. Frank Ginn. 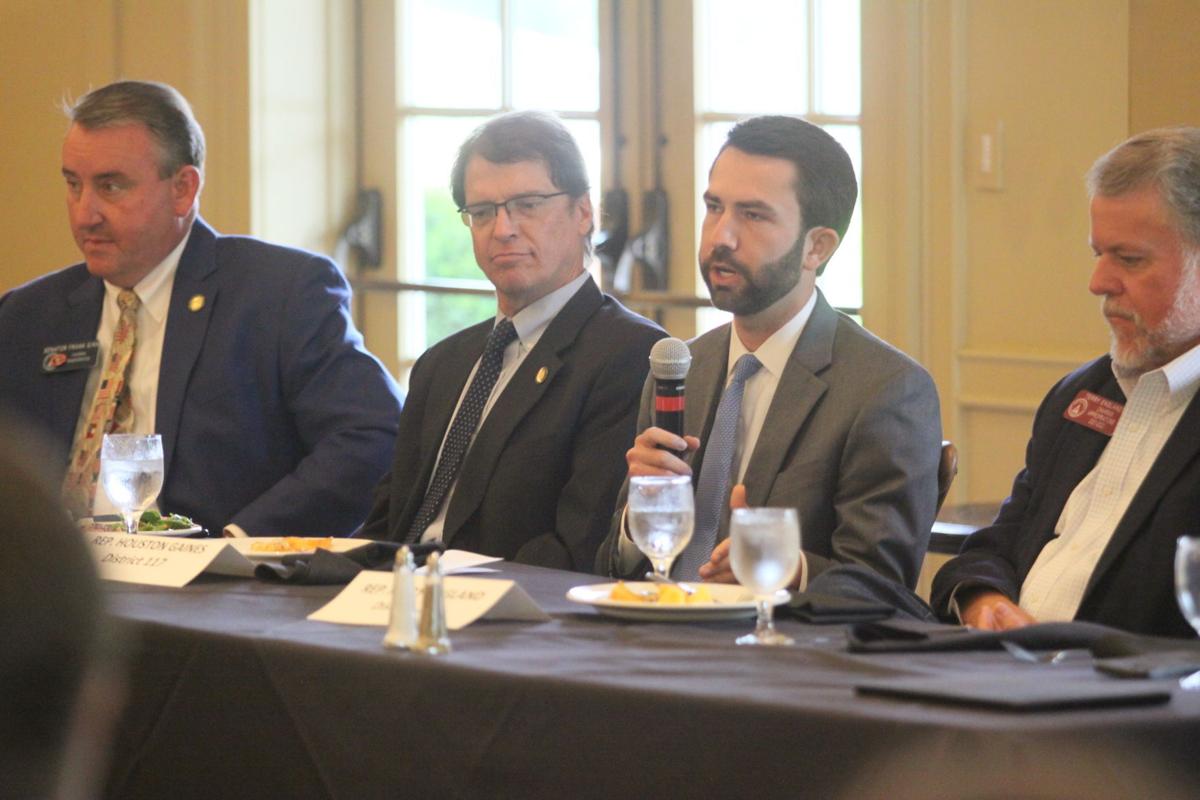 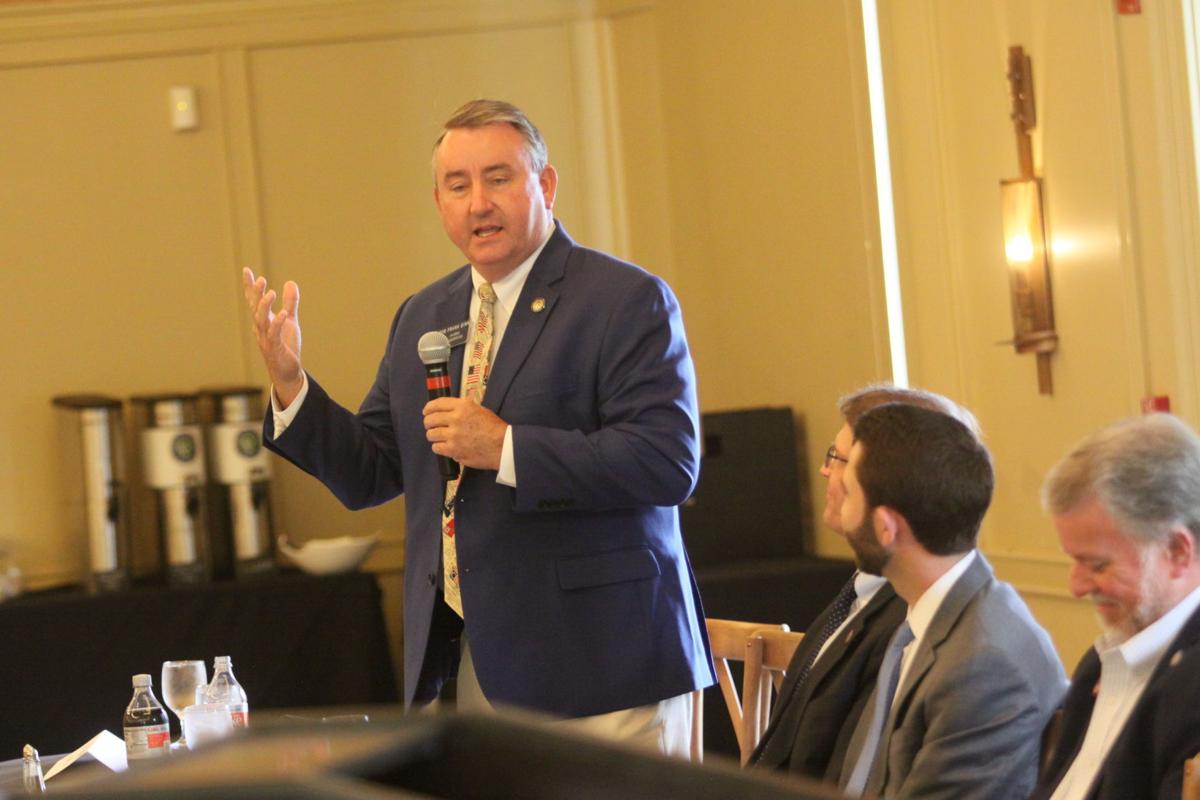 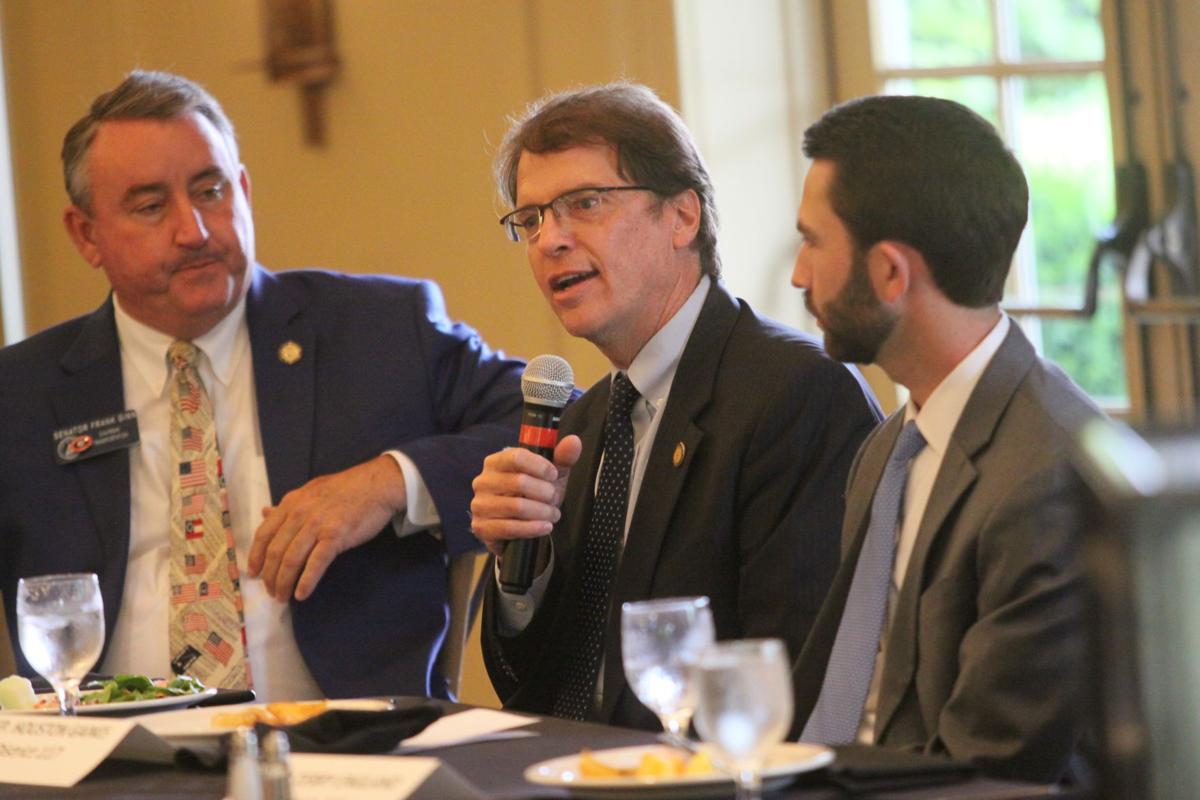 State Rep. Terry England (R-Auburn) speaks during a legislative luncheon June 3 that was hosted by the Barrow County, Oconee County and chambers of commerce at The Georgia Club in Statham. The forum, moderated by David Raynor, chief public affairs officer for the state chamber, also included remarks from state representatives Houston Gaines and Spencer Frye and state Sen. Frank Ginn.

How Georgia will spend its upcoming infusion of federal stimulus money and broader COVID-19 recovery efforts were among the topics discussed by four area state legislators last week during a legislative luncheon hosted by the Barrow County, Oconee County and Athens Area chambers of commerce at The Georgia Club in Statham.

During a question-and-answer forum moderated by David Raynor, chief public affairs officer for the Georgia Chamber, state Rep. Terry England (R-Auburn), whose district covers most of Barrow County and who chairs the state house appropriations committee, said he was expecting more announcements this week on how the state would structure its committees that will be tasked with determining how the projected $17 billion worth of funds from the American Rescue Plan that was passed by Congress and signed by President Biden in March will be used throughout the state. England said that the committee focuses will be split between economic impact, water and sewer infrastructure and broadband access.

England said the state has aging water and sewer infrastructure that needs to replaced as well as pockets where infrastructure needs to be put in place for the first time, and he said that expanding high-speed internet access across rural areas of the state is a critical need.

“You just about have to be connected to the internet today to do business, period. And you have some places that are light years behind,” said England, adding that improved broadband infrastructure could also be tied into economic impact relief. “There can be payments made to local businesses and, in watching the sales numbers every day for the past year, we saw a dramatic switch between brick and mortar retailers and online retailers. We saw a complete flip in how business was transacted.”

England pointed out that Gov. Brian Kemp has the authority under the state’s constitution to determine how the funds will be spent but said that the governor has been committed to doling out the responsibility to committees rather than being the sole arbiter.

“Hopefully it all doesn’t become this huge beast and we remain nimble and responsive with it,” England said. “But there will probably be a lot of sleepless nights spent on trying to make sure it works the way it’s supposed to.”

Local governments will also get a tranche of money through the federal plan to be spent over two years, with Barrow County alone projected to receive about $16 million and each of the municipalities in the county slated to receive their own pots of funds.

State Rep. Houston Gaines (R-Athens), whose district includes a portion of eastern Barrow County, and state Sen. Frank Ginn (R-Danielsville), who represents all of Barrow, said that local governments should spend the money wisely in ways that will benefit the most citizens.

“It’s not a permanent source of revenue; it’s a one-time injection of funding,” Gaines said.

England, Gaines, Ginn and state Rep. Spencer Frye (D-Athens) agreed that Georgia has weathered the coronavirus pandemic storm but still has work to do in its recovery from both economic and health care standpoints.

England defended Georgia’s early “reopening” of its economy as a needed spark that helped restore the state’s revenues and save businesses, while Gaines pointed to Kemp’s decision to opt Georgia out of receiving extended federal unemployment benefits as a positive amid complaints from business owners and organizations that the benefits were disincentivizing work.

“One of things I’ve heard is companies and employers saying is, ‘Just get out of our way and let us do what we need to do,’” England said.

“I think it’s important to understand that capitalism is a great concept, but it’s got to work for everybody,” Frye said. “…I understand that there might be some people who might be motivated to stay at home. …Let’s remember that everybody is different and that we all experienced the same thing but reacted differently. We can’t blame our worker shortage on just laziness. I think that’s a bad road to travel down.

“I think it’s import to understand that without the workers, nobody in this room would make any money and you’re only as strong as the weakest link in your chain.”

On other topics, Gaines and Frye agreed that the state has made progress on health care issues. Gaines cited investments in telehealth as a means of reducing costs and increasing access, while Frye said Georgia should “lead the way in innovative and creative technology as well as thought processes and systems to deliver health care to our citizens.”

“In the United States, you shouldn’t get sick and have to be bankrupt,” he said. “You shouldn’t have a baby and a $40,000 bill to have to pay for the birth of a child. We can fix this; we’re smart.”

Ginn, who chairs the Senate’s transportation committee, and England spoke about the strategic importance of the Savannah port and said her should be continued emphasis on more efficient product delivery to companies and consumers.

“We’ve got to do some things to prevent bottlenecks in transportations on our roadways,” Ginn said. “With the port, we’ve got a great opportunity, but we’ve got to make sure we’re getting things to businesses so they can get it to their customers.”

The four legislators agreed that continued business development along the State Route 316 corridor between Athens and Atlanta will be crucial for the region.

“We’ve been able to get this ball moving down the road,” Frye said. “We’re sitting next to one of the largest assets in the state. We really need to focus on that, working together as a group, to make our region the strongest in the state and an example for the nation where the nation looks to Georgia and this region for leadership to figure out what we did right to move our people to the next level for quality of life.”