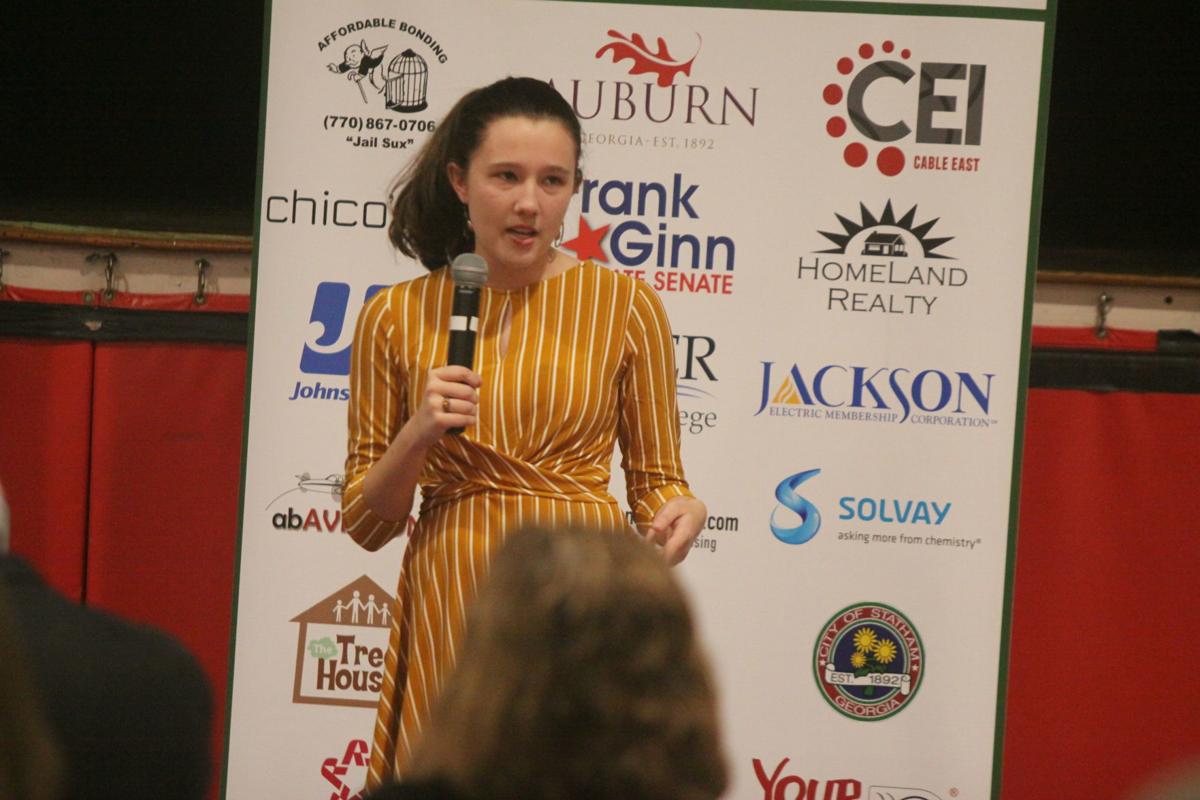 Apalachee High School senior Kelly Eick is the 2019-20 STAR student for the school and the Barrow County School System. 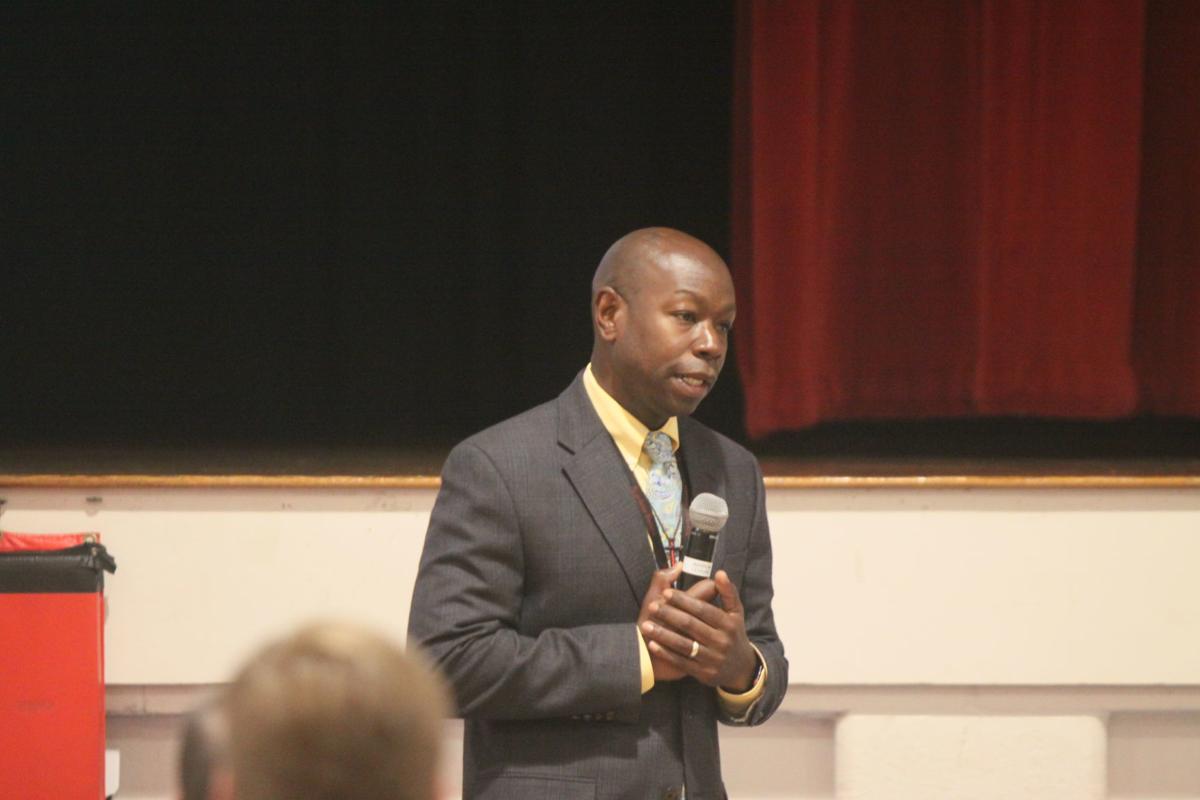 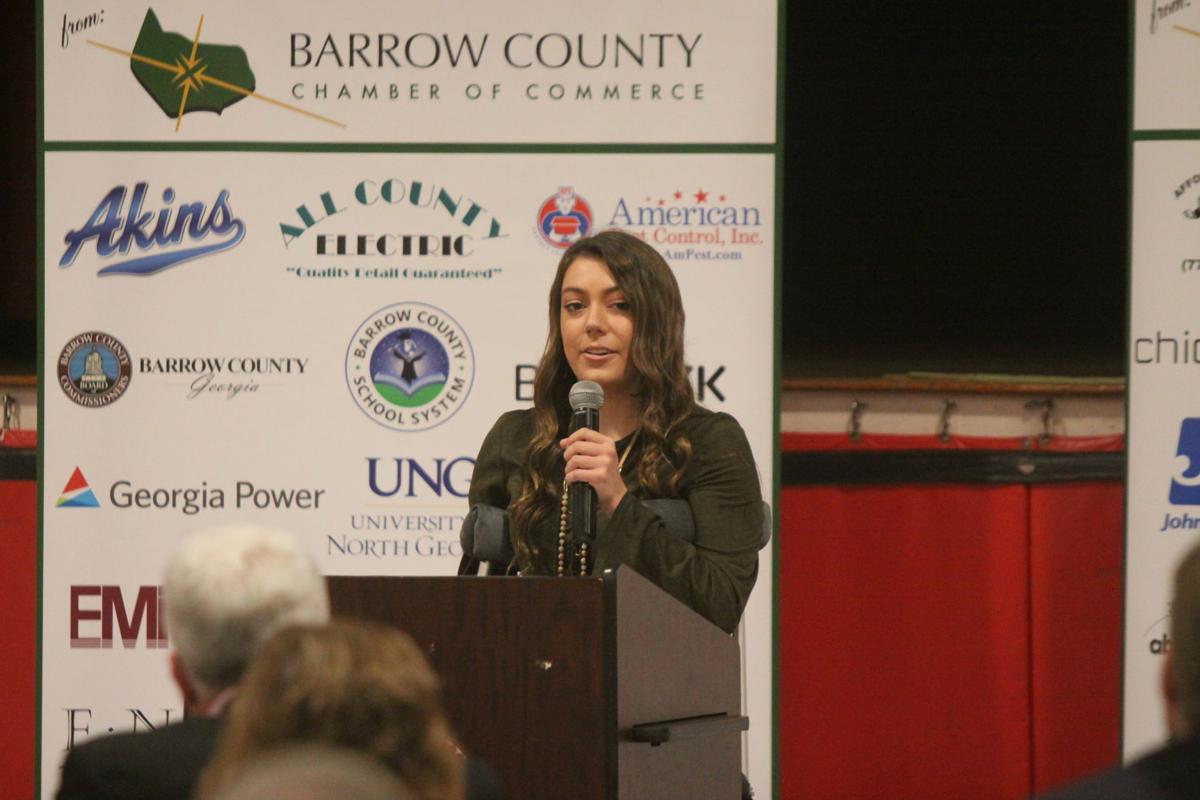 Rebekah Doolittle is the STAR student for Bethlehem Christian Academy. 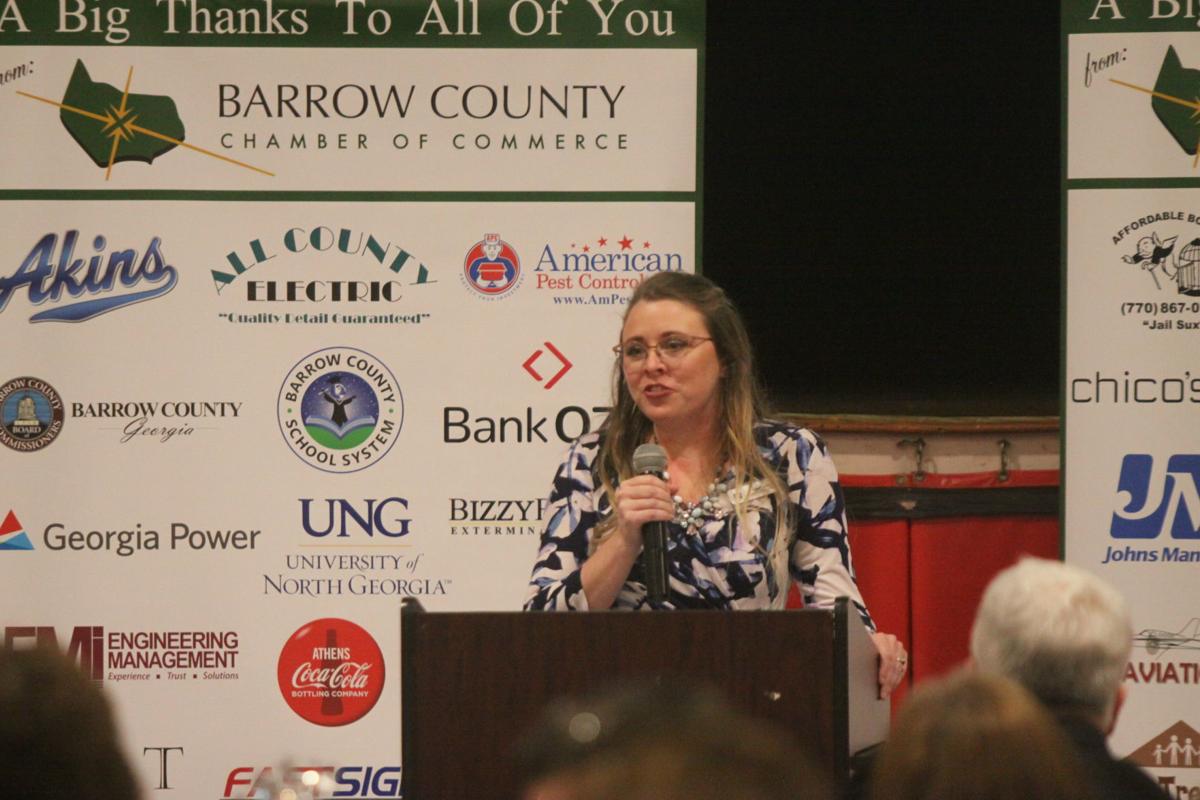 Cricket Butler was chosen as the STAR teacher for Bethlehem Christian Academy. 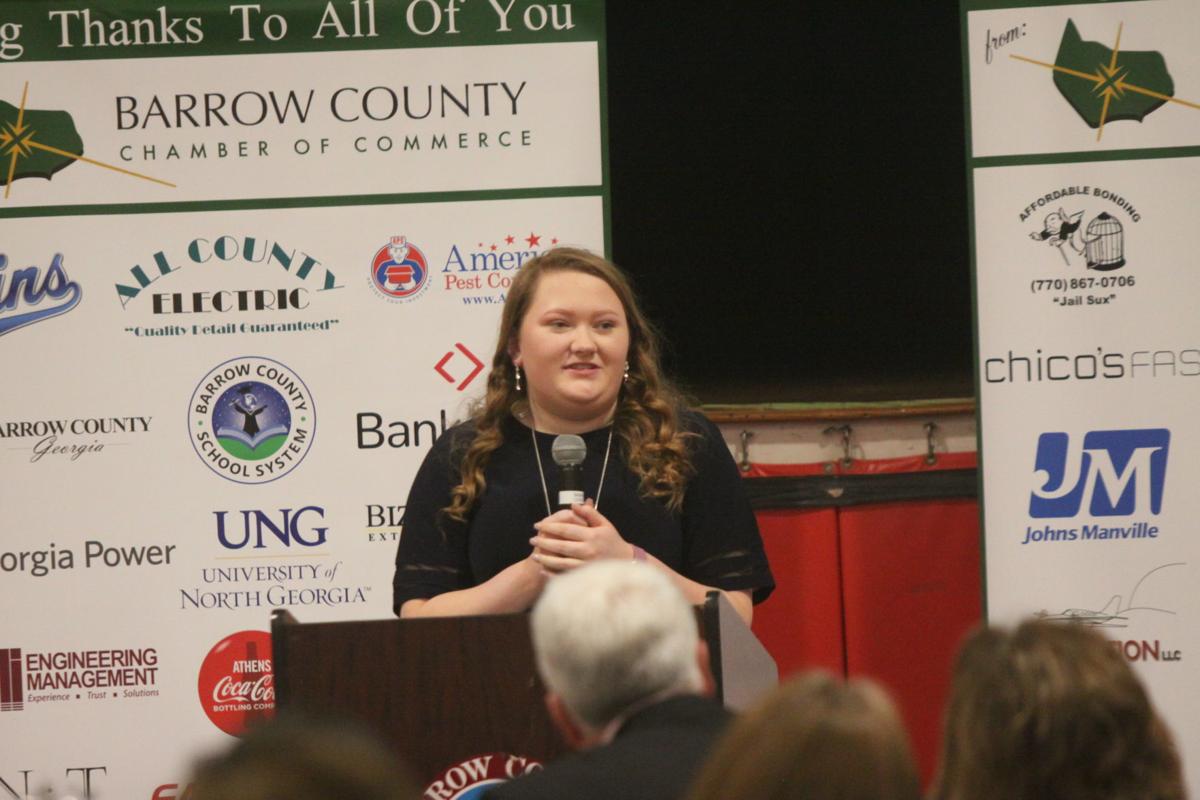 Lauren Freeman was recognized as the STAR student for Winder-Barrow High School. 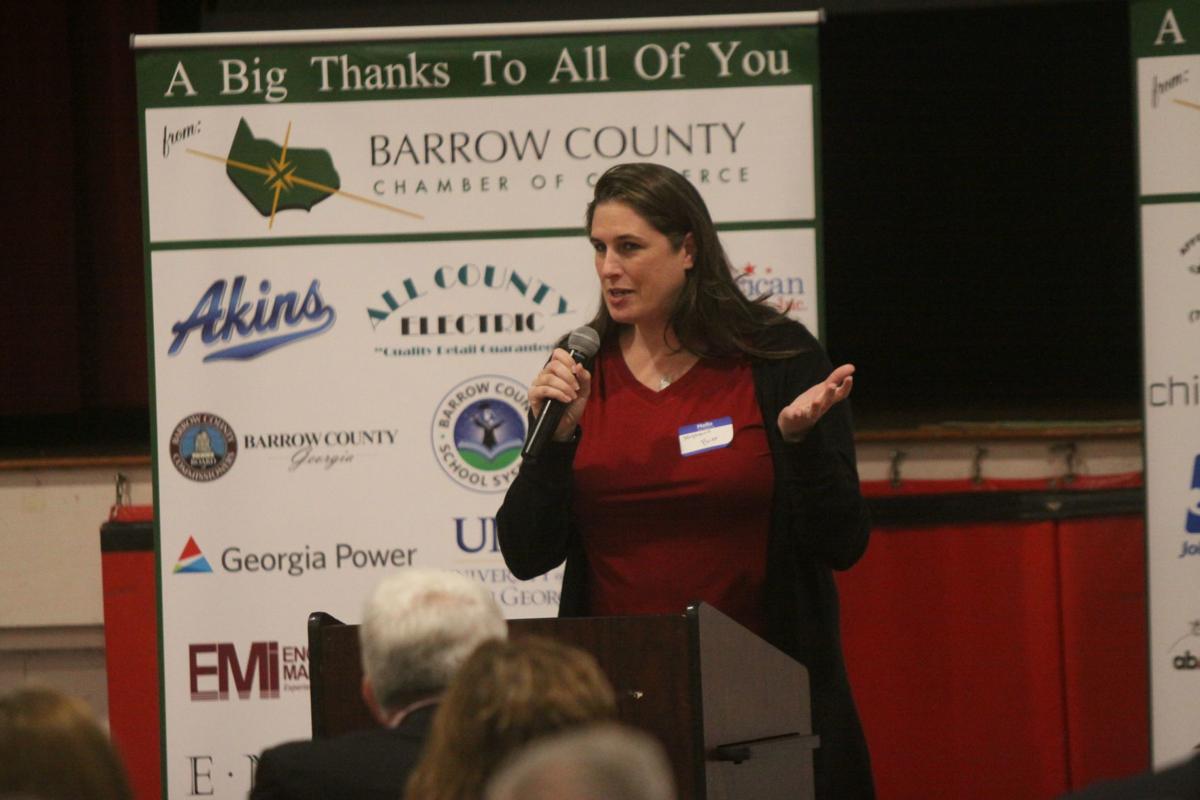 Stephanie Britt was selected as the STAR teacher for Winder-Barrow High School.

Apalachee High School senior Kelly Eick is the 2019-20 STAR student for the school and the Barrow County School System.

Rebekah Doolittle is the STAR student for Bethlehem Christian Academy.

Cricket Butler was chosen as the STAR teacher for Bethlehem Christian Academy.

Lauren Freeman was recognized as the STAR student for Winder-Barrow High School.

Stephanie Britt was selected as the STAR teacher for Winder-Barrow High School.

“I have felt so honored to work alongside her,” Martin said of Eick, who is also the Barrow County School System’s system-wide STAR student for the year. Eick was recognized by the chamber along with Bethlehem Christian Academy senior Rebekah Doolittle and Winder-Barrow High School senior Lauren Freeman for having the highest SAT score and finishing in the top 10 of their graduating classes. The three students also introduced their STAR teachers during the luncheon.

Eick, who has been accepted to Georgia Tech and is awaiting word from Duke University, went with an unconventional choice, choosing AHS band director Dion Muldrow as her STAR teacher.

She recalled a story about how Muldrow had supported her since she was a timid freshman entering band camp.

“Every day, he followed up with me and asked me how I was doing,” Eick said. “To be an effective leader, you need to know who you’re working with from the top down. It’s more than a grade on a piece of paper or an SAT score. He’s taught me how to be a leader.”

Muldrow said he was honored that Eick described him as her hero and praised her love and compassion for her fellow students.

“Kelly’s going to change the world,” Muldrow said. “She’s a selfless leader. And that compassion for others, at a time when that’s what this world needs, that’s what she brings.”

Doolittle is the third sibling in her family to earn the STAR student honor at BCA, and Butler said she has made a name for herself, taking on several student leadership and ambassador roles while also lettering in three varsity sports — basketball, volleyball and track and field.

“Her impressive work ethic and determination helps her handle everything with maturity,” Butler said of Doolittle. “Her influence transcends her work in the classroom.”

Doolittle called Butler a “phenomenal teacher” who is “excited and joyful to share everything she knows with her students.”

“She made her class fun and would also sacrifice hours outside the classroom to help others,” Doolittle said of Butler. “She’s a cheerleader, a great teacher and one of the most passionate people I know in everything she does.”

While many might shy away from math classes, Freeman found a love for calculus class with Britt as a junior. She loved it so much, she said, that she enrolled in AP Calculus her senior year, again studying under Britt.

“She’s the best math teacher I’ve ever had,” Freeman said of Britt. “She makes math fun but she also gets things done. She knows how to teach the material but not make us hate it.”

Britt said her goal is for her students to walk into any math class at any institution of higher learning and be confident.

“She made my job so much easier,” Britt said of Freeman. “She loved the material and loved being there. She inspired me to be a better teacher and helped me see that there are still students out there that I can make a difference with.”