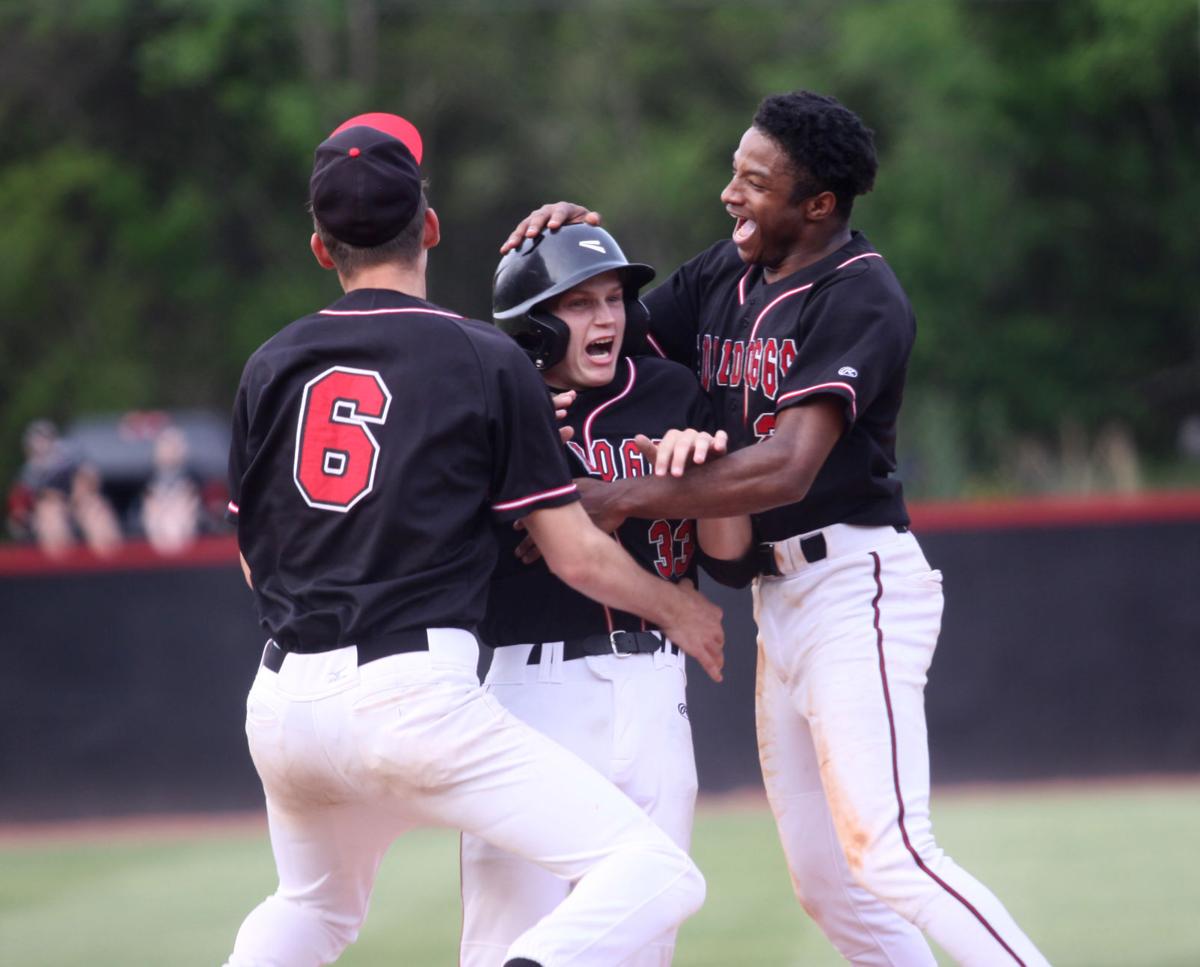 Winder-Barrow's Isaac Reivitis (center) is mobbed by teammates Andrew Lewis (right) and Brooks House after his walk-off base hit gave the Bulldoggs a 13-3 win in five innings Thursday, April 29, over South Paulding in Game 1 of a best-of-three GHSA Class 6A playoff series. The Bulldoggs went on to take Game 2 2-1 to complete the sweep and advance to their fifth consecutive Sweet 16. 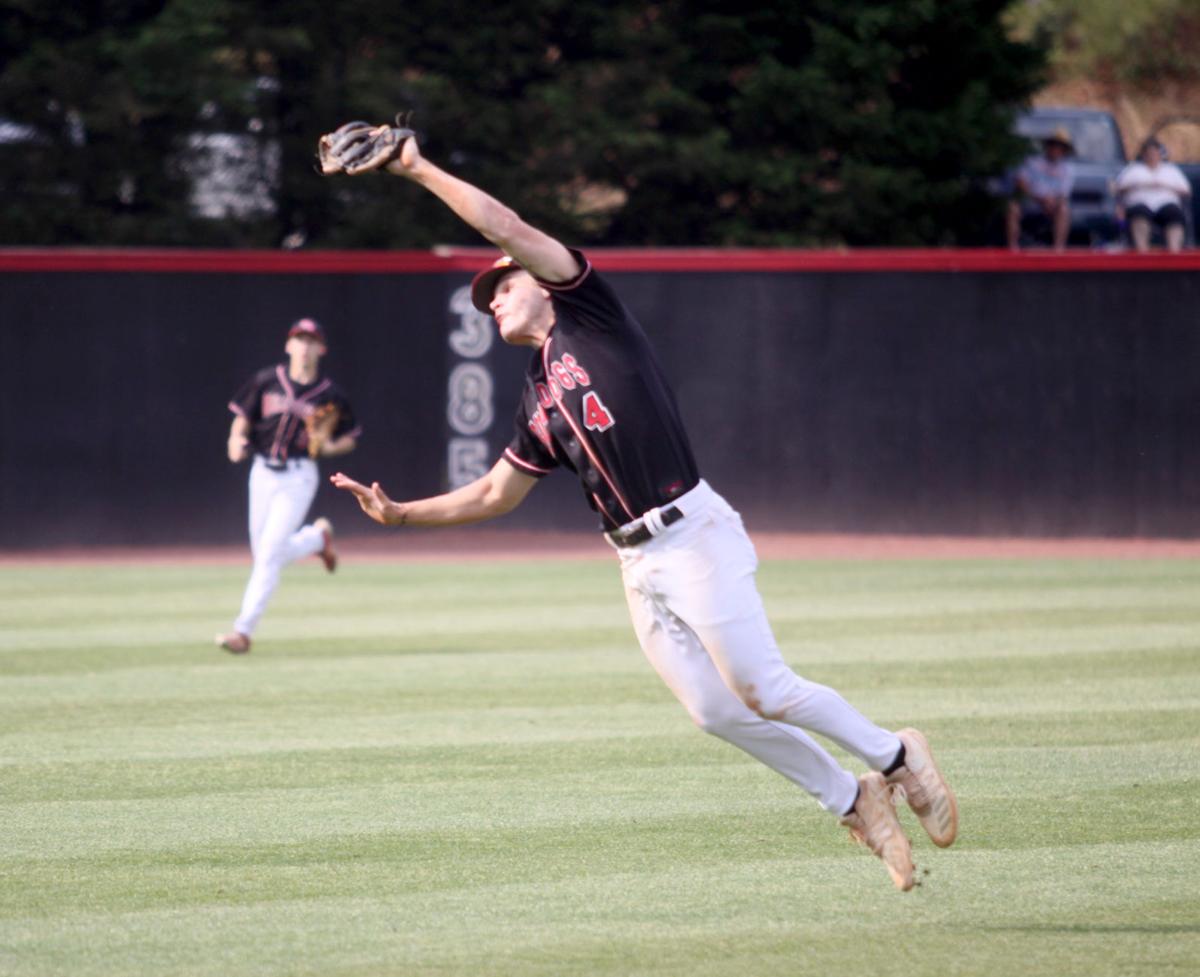 Winder-Barrow senior shortstop Brady House makes a diving catch in the fourth inning of Game 1 to save a run. 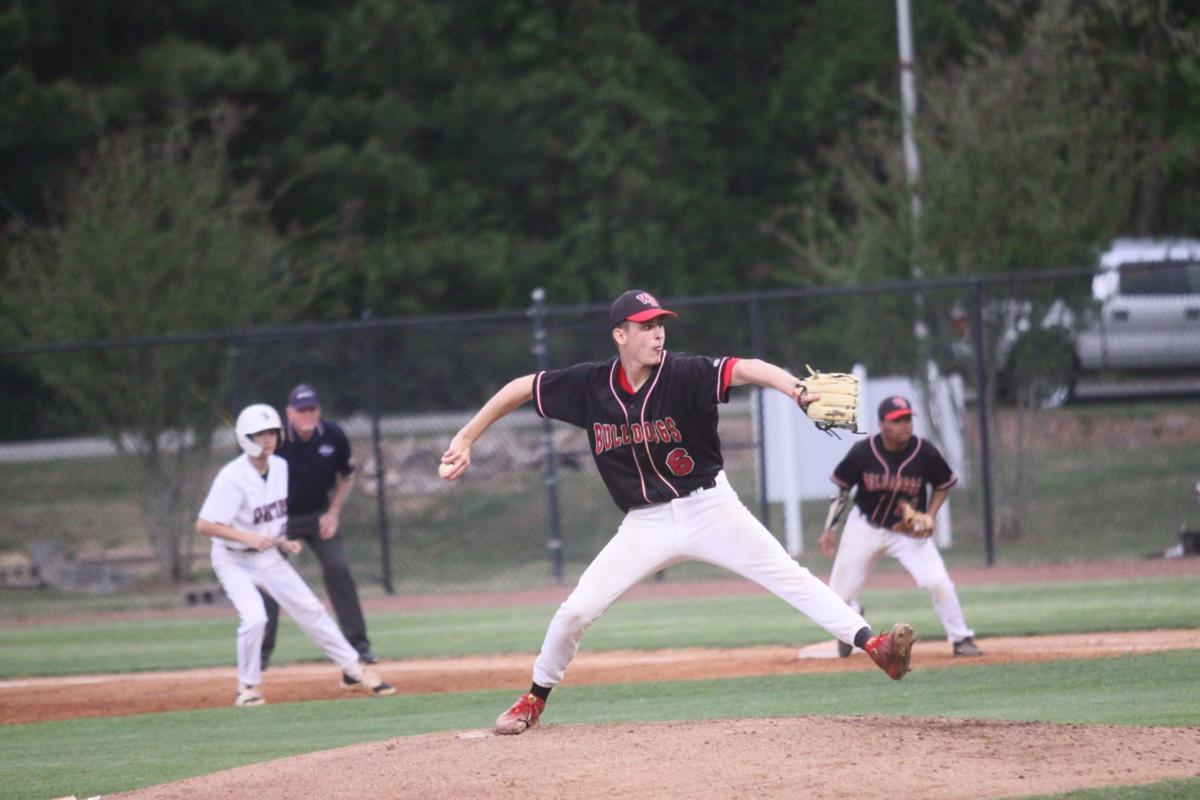 Winder-Barrow sophomore Brooks House allowed just one run on one hit in six innings in Game 2 Thursday to lead the Bulldoggs to a 2-1 win and a first-round playoff sweep of South Paulding.

Winder-Barrow's Isaac Reivitis (center) is mobbed by teammates Andrew Lewis (right) and Brooks House after his walk-off base hit gave the Bulldoggs a 13-3 win in five innings Thursday, April 29, over South Paulding in Game 1 of a best-of-three GHSA Class 6A playoff series. The Bulldoggs went on to take Game 2 2-1 to complete the sweep and advance to their fifth consecutive Sweet 16.

Winder-Barrow senior shortstop Brady House makes a diving catch in the fourth inning of Game 1 to save a run.

Winder-Barrow sophomore Brooks House allowed just one run on one hit in six innings in Game 2 Thursday to lead the Bulldoggs to a 2-1 win and a first-round playoff sweep of South Paulding.

In baseball, one play can change the trajectory of a game and even an entire postseason series. Thanks to its star player, Winder-Barrow was on the pleasant end of one of those shifts Thursday, April 29, in Game 1 of its GHSA Class 6A first-round home playoff series against South Paulding.

With his team down 3-2 in the top of the fourth inning, senior shortstop Brady House, the highly-touted Tennessee signee and projected first-round MLB draft pick, made a spectacular, full-extension diving catch in shallow left field for the third out, taking away an RBI single and keeping the Bulldoggs within a run in the process. That grab sparked the Winder-Barrow offense as the Bulldoggs plated four runs in the bottom of the frame to take their first lead and then piled on seven runs in the fifth to claim a 13-3, run-rule shortened victory.

House followed up his tide-turning catch by striking out the side in the bottom of the seventh of Game 2 to preserve a 2-1 victory for his younger brother, Brooks House, and send the Bulldoggs to the Sweet 16 for a fifth consecutive season.

The sixth-ranked Bulldoggs (24-5) will now gear up for a trip to Acworth, where they’ll face No. 4 Allatoona (27-5) in a marquee second-round series slated to begin Wednesday, May 5.

“I’m just relieved and happy, but that was a lot of fun,” Winder-Barrow coach Brian Smith said after his team closed out the sweep of South Paulding (20-9). “Momentum changes can be a weird thing. But that play Brady made, I never take that for granted because it’s so much fun to have a guy like that on the field. Sometimes a play surprises you, but you also expect him to do something like that at some point because he’s such a special kid and player.”

Winder-Barrow started its fourth-inning rally in Game 1 when Ryan Ford was hit by a pitch and moved to third when Evan Coleman reached on an error. That error turned out to be costly for South Paulding, as it allowed Michael DeFrancisco to put down a sacrifice, safety-squeeze bunt to score Ford and tie the game.

Andrew Lewis, who pitched the series opener for the Bulldoggs and fought off constant traffic on the base paths in the first three innings to keep the game close, worked a clean fifth inning, and Winder-Barrow’s offense went right back to work. Ford, along with the rest of the bottom of the Bulldoggs’ batting order, got the wheels turning again with a one-out walk and back-to-back singles by Coleman and DeFrancisco to extend the lead to 7-3. That helped turn over the lineup again for the big boys in the order, who all delivered. House, who South Paulding avoided pitching to for most of the day — he walked four times, three intentional, and was hit twice during the doubleheader — ripped an RBI double inside the third-base line to bring in Coleman, Drew Lewis followed with a two-run double, and Dre Lewis then launched his fifth homer of the year over the right-field wall to make it 12-3. Noah Lee followed with a double of his own, and Isaac Reivitis’ base hit chased home pinch runner Ryan McNally to end the game early.

The Lewis brothers and Game 1 battery mates combined for eight hits (four apiece) on the day and each drove three RBIs in the opener as Dre Lewis padded his team-leading RBI total at 41. Andrew Lewis didn’t allow any earned runs in his five innings in the series opener and shook off some wildness to grind out the win, improving to 9-1 on the year and lowering his ERA to 1.50.

“I’m just proud because I feel like we scrapped, battled and fought all day,” Smith said. “It wasn’t pretty for a little bit, but we continued to stick together. Pitching-wise, everything fell into place for us. Going back to Drew, I don’t think he had his best stuff, but he really competed his way through it and kept us in it.”

Even though Lewis wasn’t at his sharpest on the hill, sophomore Brooks House turned in his strongest performance of the year to pick up his ninth win. The younger House brother, who was making his first career playoff start after the COVID-19 pandemic wiped out the back half of the 2020 season, carried a no-hitter and shutout into the bottom of the sixth inning and struck out eight batters to move to 9-1 with a 1.57 ERA.

South Paulding turned to its ace, junior Cole Brewer, in Game 2, and he matched House in the early innings by wiggling out of several jams. The Bulldoggs put runners on second and third with no one out to start the game, but Brewer bounced back by striking out the next three batters to escape trouble.

Winder-Barrow left the bases loaded in the second and stranded eight runners over the first four innings before it finally broke through in the fifth with a little help from the South Paulding defense. Dre Lewis led off with a single and, after a pair of fly outs, the Bulldoggs put Coleman, in as a courtesy runner, in motion. Pate Smith grounded to third on the pitch, but the South Paulding third baseman’s throw sailed over the first baseman’s head and hugged the fence as it trickled away in foul territory, giving Coleman time to race around and score the game’s first run. The Bulldoggs extended their lead in the sixth when McNally, in as a courtesy runner after Carlos Urbina led off with a walk, scored on a passed ball.

Brooks House set down the first two men he faced in the bottom of the sixth, but a two-out walk, a wild pitch and an RBI single by Lawson Folds broke up the no-hit bid and got the Spartans on the board. House then issued another free pass — his fourth of the night — putting the tying run in scoring position and the go-ahead run on base and prompting a mound visit from Smith. After a brief conference, with closer Brady House warming up on the side from his shortstop position, Smith made the decision to stick with the younger brother, who in turn rewarded his coach’s faith by inducing a ground-ball fielder’s choice to get out of the inning. Brady House worked around a one-out walk in the seventh and struck out the side to notch his fourth save of the season, keep his ERA intact at 0.00 and send the Bulldoggs on through to round two.

“I was pretty much 50-50 walking out there,” Smith said of his decision to leave his young starter in during a pivotal point late in the game. “But I felt like Brady hadn’t had enough bullpen at that point, and I knew Brooks had (struck out) the guy he was facing twice. And when I was talking and feeling it out, Brooks really sold himself big-time with very confident responses. When you feel like a guy has that level of confidence in a spot like that, you stick with him.”

Winder-Barrow now turns its attention to the Sweet 16 and its date with Allatoona, another 6A power in recent years. Smith knows the Bulldoggs, who left 12 men on base in Game 2 against South Paulding, can’t afford to not cash in on as many chances as possible in what is shaping up to be a tightly-contested series.

“We’ll do a better job and get better,” Smith said. “This group is smart and they understand and can see what needs to be improved on. So we’ll go to work and get ready for the next challenge.”