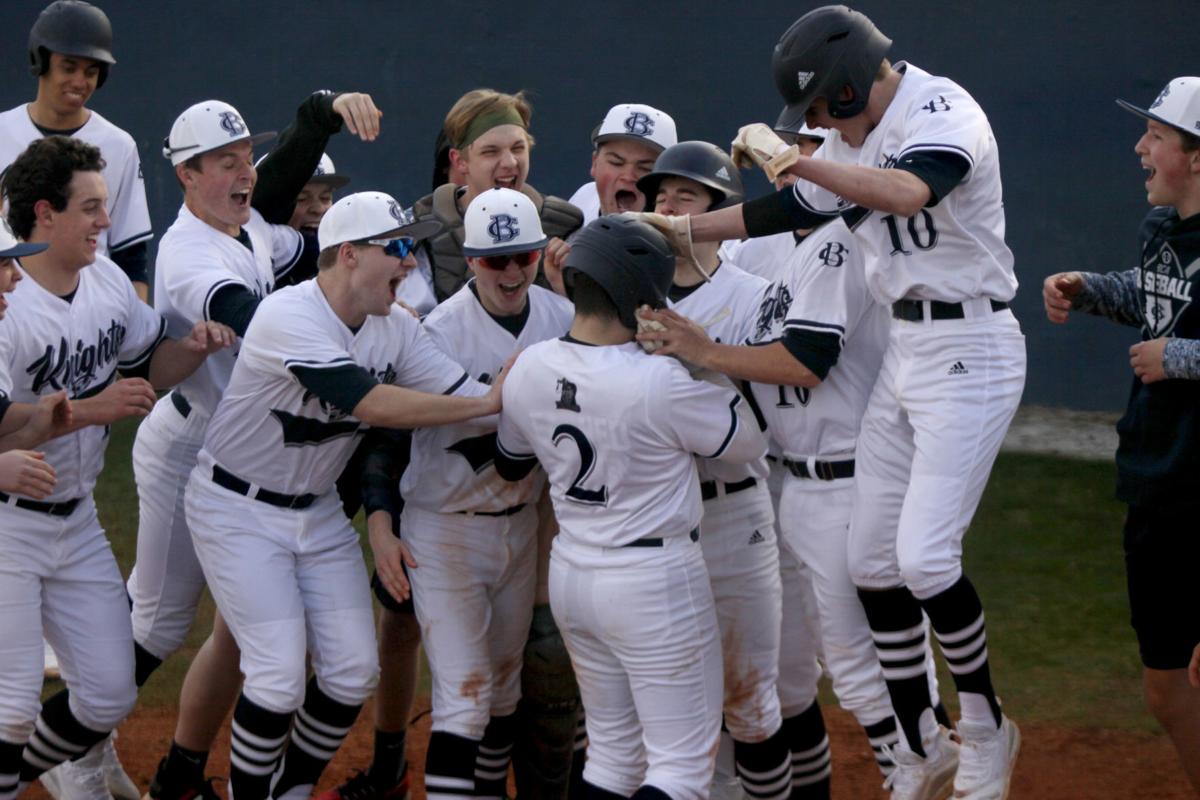 BCA's Landon Youngblood (2) is mobbed by teammates after hitting a grand slam in the bottom of the second inning of the Knights' season-opening 17-0 win against Augusta Prep on Friday, Feb. 28. 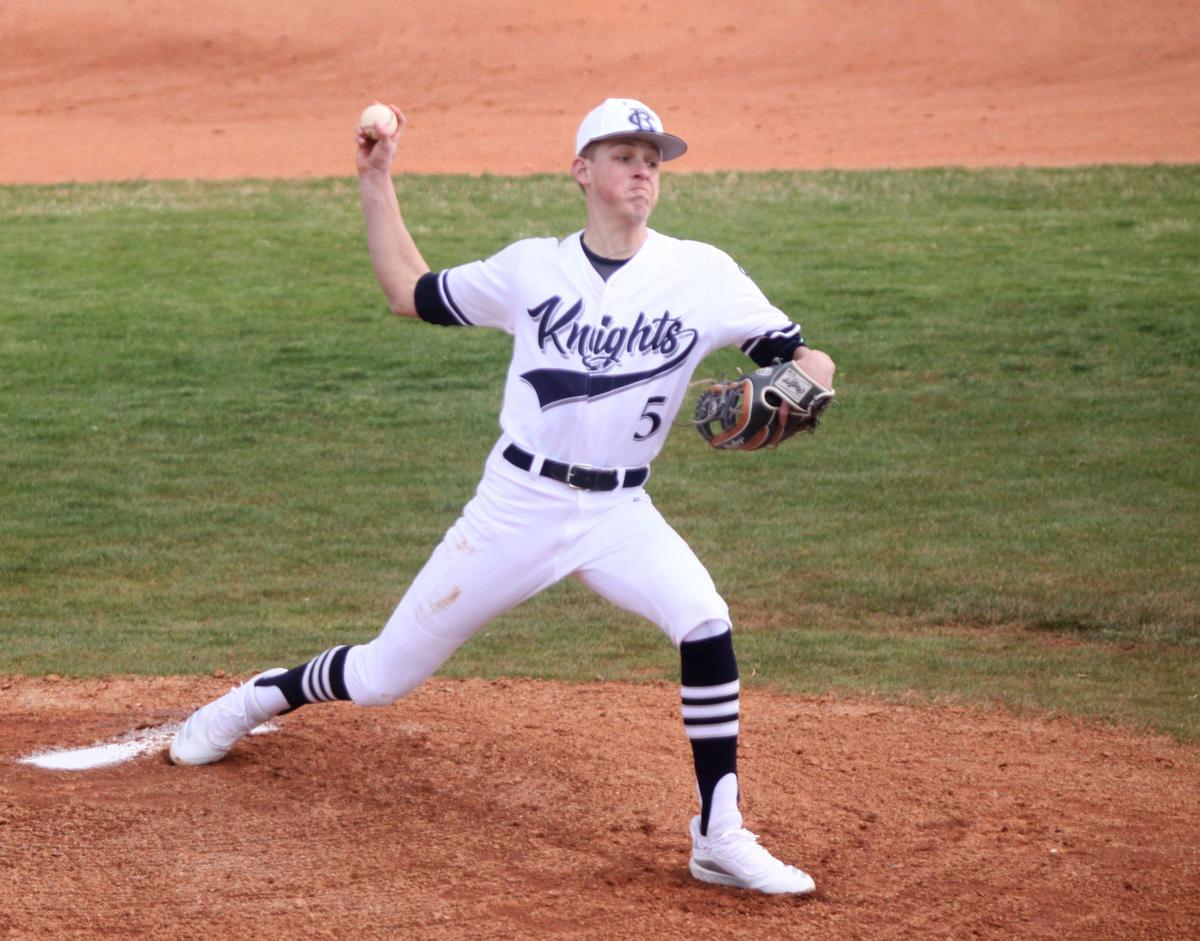 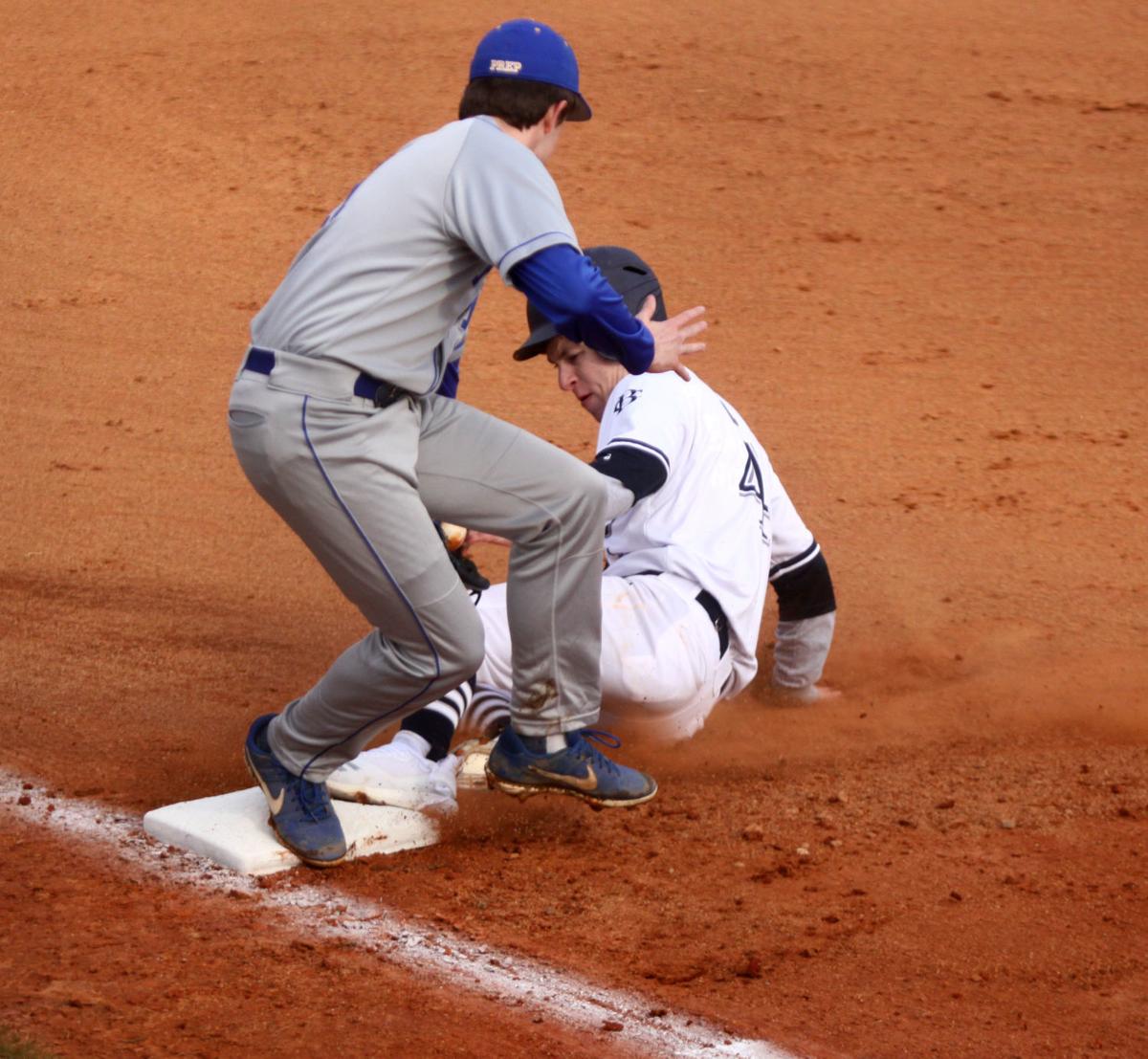 BCA's Dylan Day slides in safely at third base after advancing on a wild pitch. 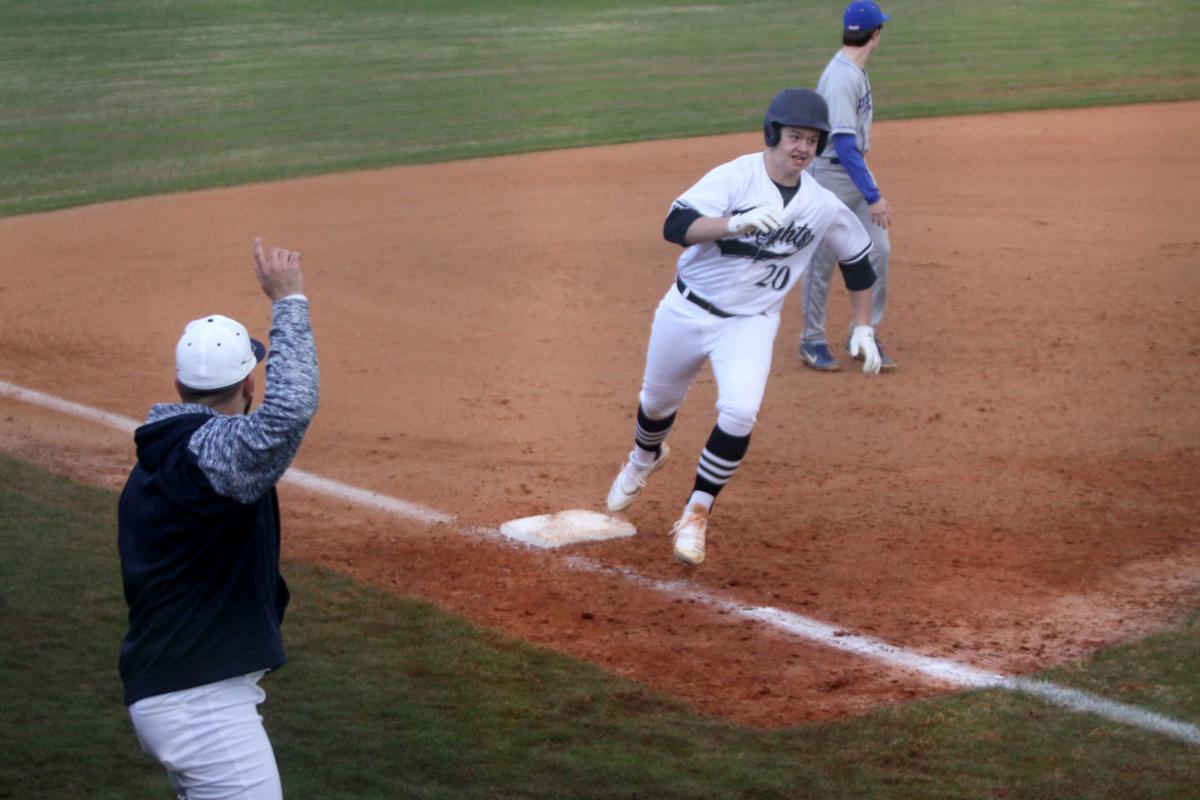 BCA's Logan Garmon is waved around third by Knights coach Mike DeSantis on a three-run double by Bryce Peppers in the first inning against Augusta Prep. 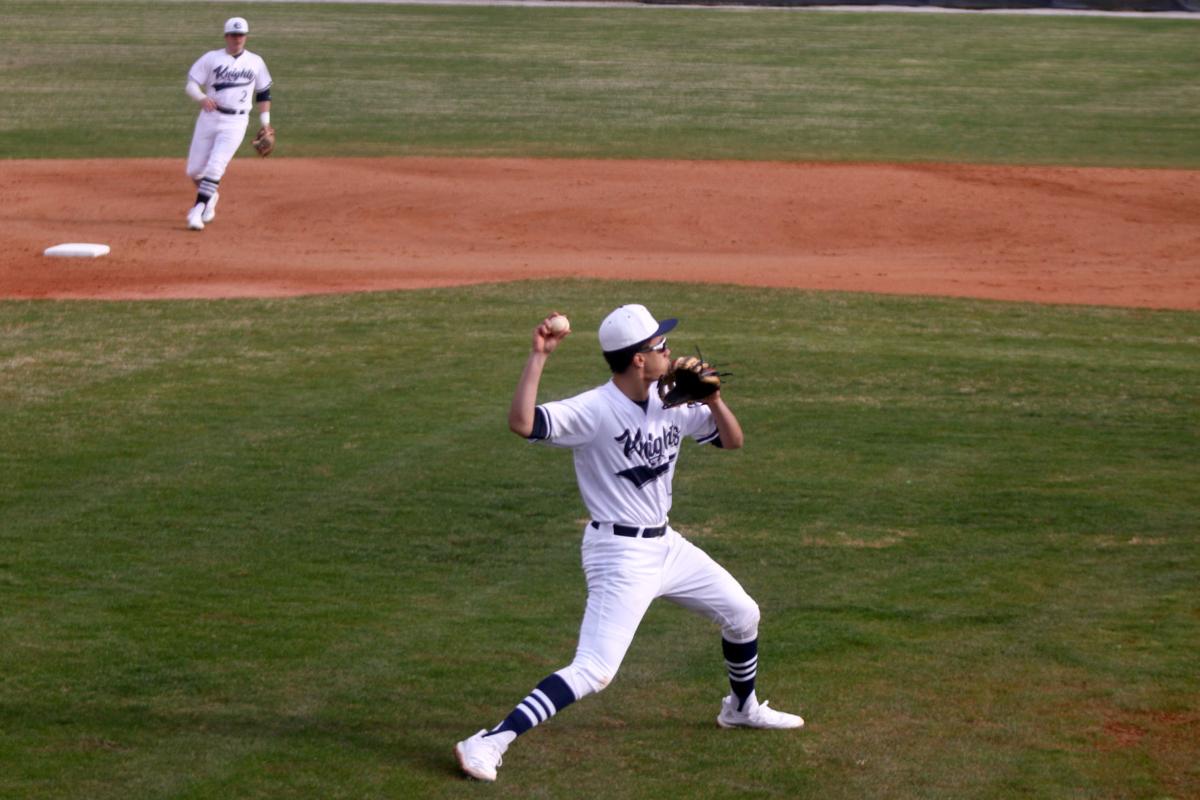 BCA third baseman Ethan Guthas throws a runner out at first base. 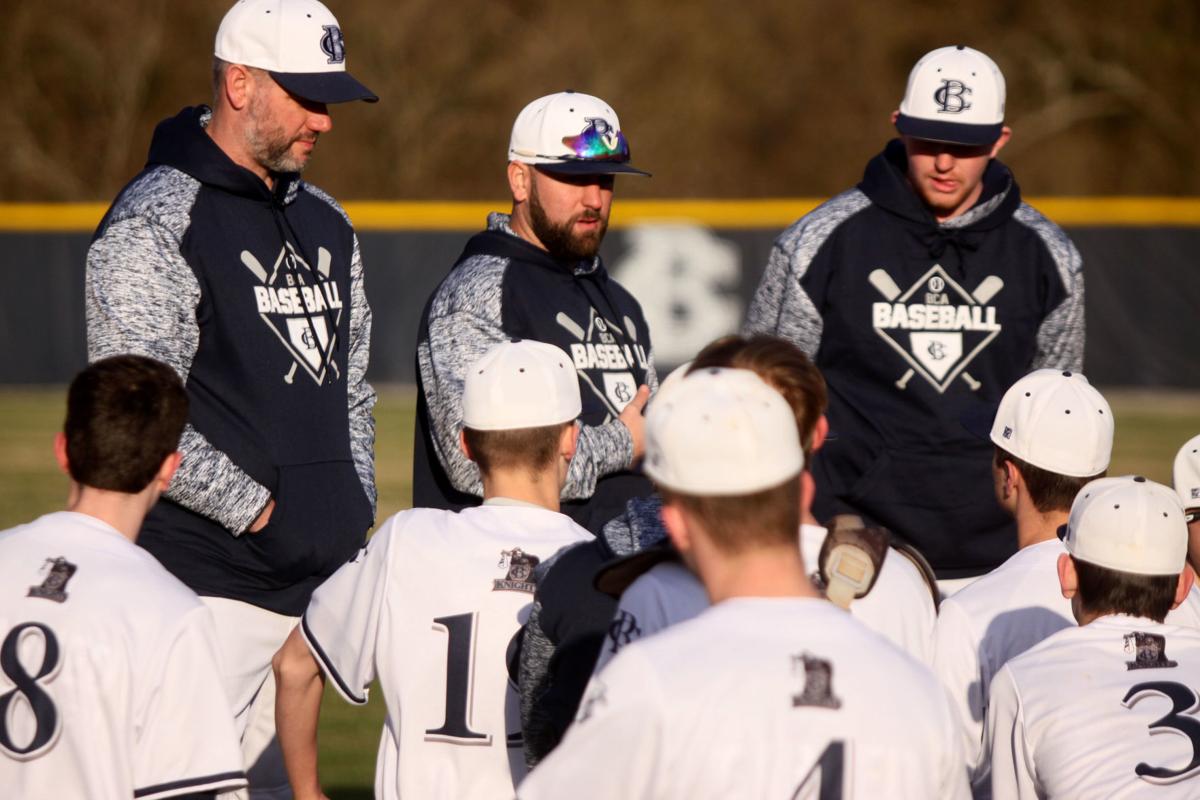 BCA's Landon Youngblood (2) is mobbed by teammates after hitting a grand slam in the bottom of the second inning of the Knights' season-opening 17-0 win against Augusta Prep on Friday, Feb. 28.

BCA's Dylan Day slides in safely at third base after advancing on a wild pitch.

BCA's Logan Garmon is waved around third by Knights coach Mike DeSantis on a three-run double by Bryce Peppers in the first inning against Augusta Prep.

BCA third baseman Ethan Guthas throws a runner out at first base.

The Mike DeSantis era for Bethlehem Christian Academy baseball got off to a resounding start Friday, Feb. 28, but the Knights’ new head coach said the expectations will be much higher going forward.

BCA scored early and often in its season opener and made quick work of Augusta Prep, trouncing the Cavaliers 17-0 in three innings at home. The game was also the GISA Region 4-AAA for the Knights.

BCA (1-0, 1-0 region), which pounded out nine hits and drew nine walks, scored four times in the bottom of the first inning and then exploded for 13 runs in the second to set up the mercy rule. Freshman catcher Bryce Peppers had two doubles and four RBIs, while senior second baseman drove in five runs, capping the second-inning outburst with a grand slam to dead-center. Meanwhile, senior right-hander Payton McFadyen threw three hitless innings and struck out seven Augusta Prep batters.

“I told them coming in here and only having a month and a half to get ready, I’m just trying to set a standard where we can be confident going forward,” said DeSantis, who took over the program after a roughly six-month search following the dismissal of Matt Nicks who had guided the Knights to four straight playoff appearances. “We’ve been able to get some work in (at a new hitting facility in the area), even though the rain has hindered us a bit, so it was good to see them finally come out and swing the bats well.”

After Augusta Prep went quietly in the top of the first, Day led off the bottom of the inning with a single, stole second, moved to third on a wild pitch and then swiped home when Youngblood drew a throw down to second on a steal. Back-to-back walks by Logan Garmon and Ethan Guthas loaded the bases, and Peppers cleared them with a double in the left-center field gap.

The Knights sent 18 men to the plate in the second, which started with a Dalton Garmon walk. Garmon later scored on a bases-loaded walk to Youngblood, Logan Garmon followed with a two-run single, and a two-run triple by Guthas and RBI double by Peppers quickly extended the lead to 10-0. Dalton Garmon and Day had run-scoring singles later in the inning, setting up Youngblood’s blast.

It was another blowout victory over Augusta Prep for the Knights, who routed the Cavaliers 20-0 and 18-0 in two matchups last spring. But DeSantis knows the competition will pick up, starting Friday and Saturday, March 6-7, when the Knights compete in the annual Border Wars tournament in Phenix City, Ala. They’ll resume region play Tuesday, March 10, at Westminster School of Augusta before a non-region home game with Gatewood on March 12. And then they’ll step up into GHSA for a short trip over to Apalachee on March 13 before a stretch of region contests begins March 17 at home against John Milledge Academy.

“This was a good start, but when we’re playing stiffer competition, we need to be offensively and defensively sound,” DeSantis said, pointing out that, even with the 17-0 win, there was room for growth in certain areas. The Knights committed only one error in three innings in the field but had a couple of base-running blunders that brought the first inning to a premature end. “We can’t be satisfied with a win like this. We’re looking to do big things and put BCA back on the map again.”

Since arriving on campus in January and even before then, DeSantis said BCA’s senior leadership has impressed him, especially Youngblood and first baseman Drew Everett, who will miss the entire spring with an injury but remains a strong presence in the dugout and locker room.

“Whether they’re outspoken or quiet, they all lead by example,” DeSantis said. “Landon has really taken initiative. I gave him the reigns early to relay stuff to the boys and hold them to the standard that BCA should be. And Drew’s been a rock. He’s got a couple of (collegiate offers). God has a plan for him and he’ll see why down the road.

The Knights should also benefit from a pair of senior Archer transfers in Day and McFadyen, who is leading the pitching staff and was strong in his first outing with his new team, facing just one batter over the minimum in three innings and not allowing Augusta Prep to hit the ball out of the infield.

“We have a decent amount of pitching this year,” DeSantis said. “We wanted to give Payton the ball for the season opener but we’ve got some underclassmen who we expect will throw the ball well for us, too.

“I’m just thankful for the trust that’s been instilled in me here and for the boys for believing in me. “I think there’s some very good things to come for BCA.”