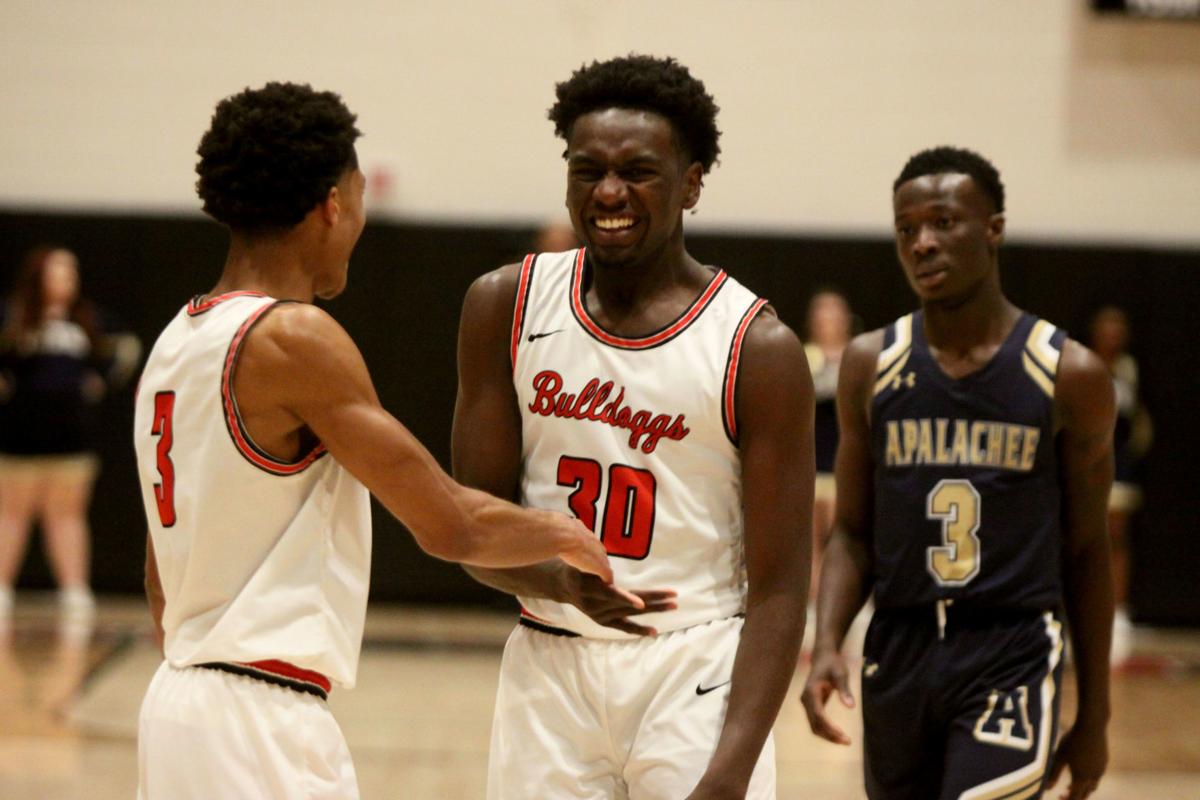 Winder-Barrow's Timmy Presley cracks a smile and celebrates with teammate Ahmad Scott after scoring a basket and drawing a foul during the second half of the Bulldoggs' 73-62 win over Apalachee on Saturday, Jan. 4. 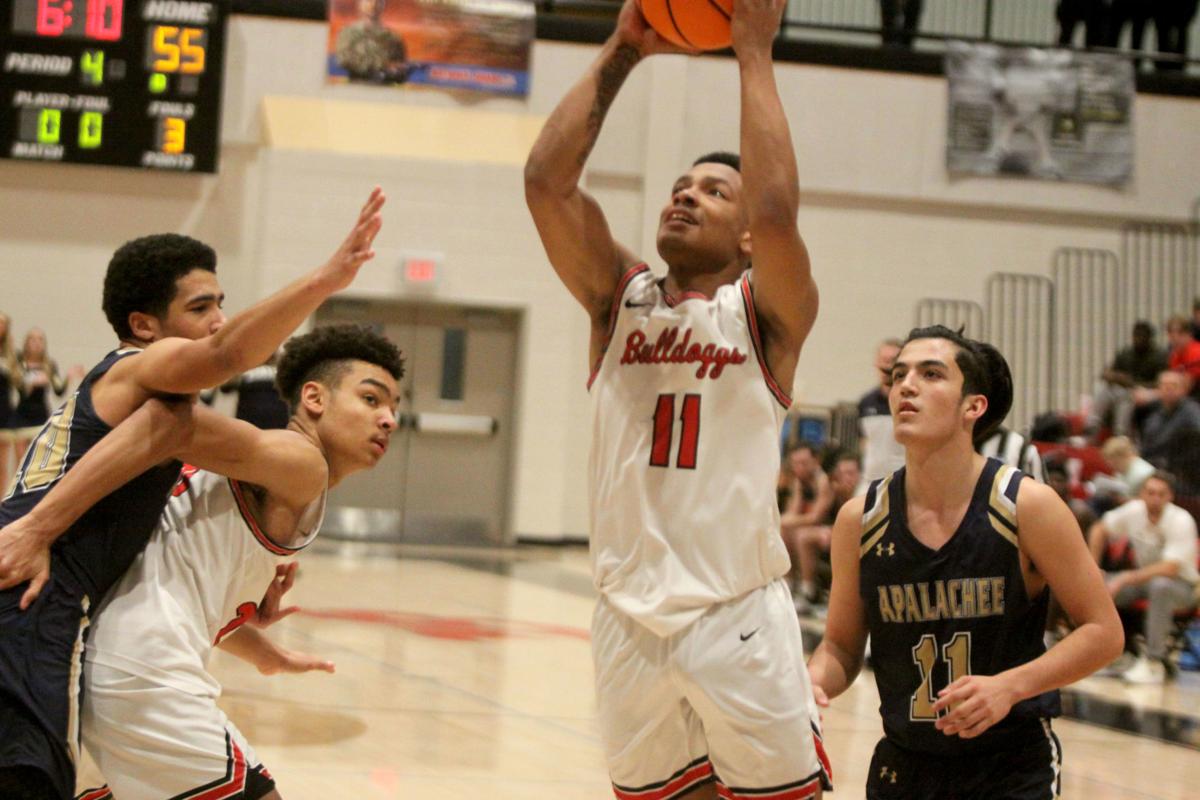 Winder-Barrow's Tyreek Perkins drives the lane for score with a blocking assist from teammate Isaiah Nelson-Ododa. 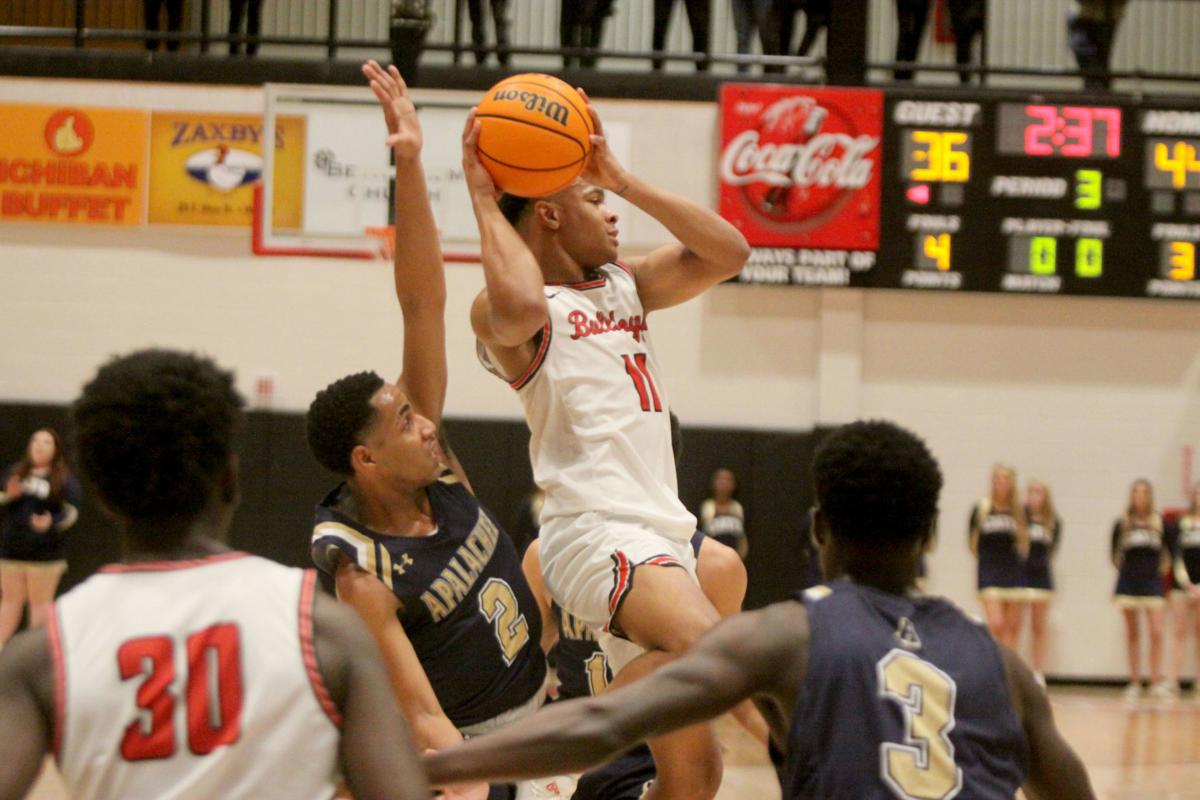 Winder-Barrow's Tyreek Perkins passes the ball off during the second half of Saturday's game. 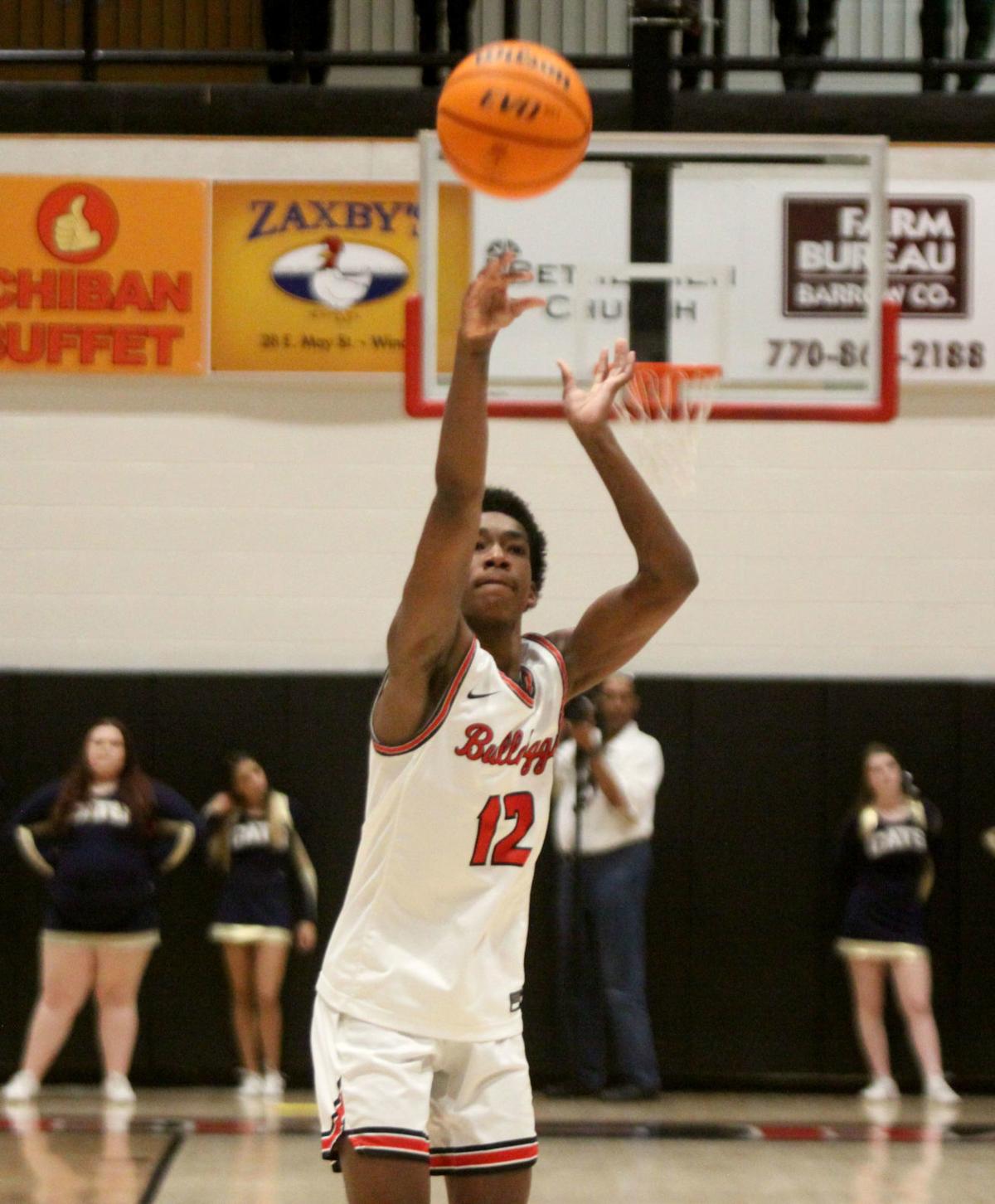 Winder-Barrow's Tim Loud hits a shot during the second half of Saturday's game. 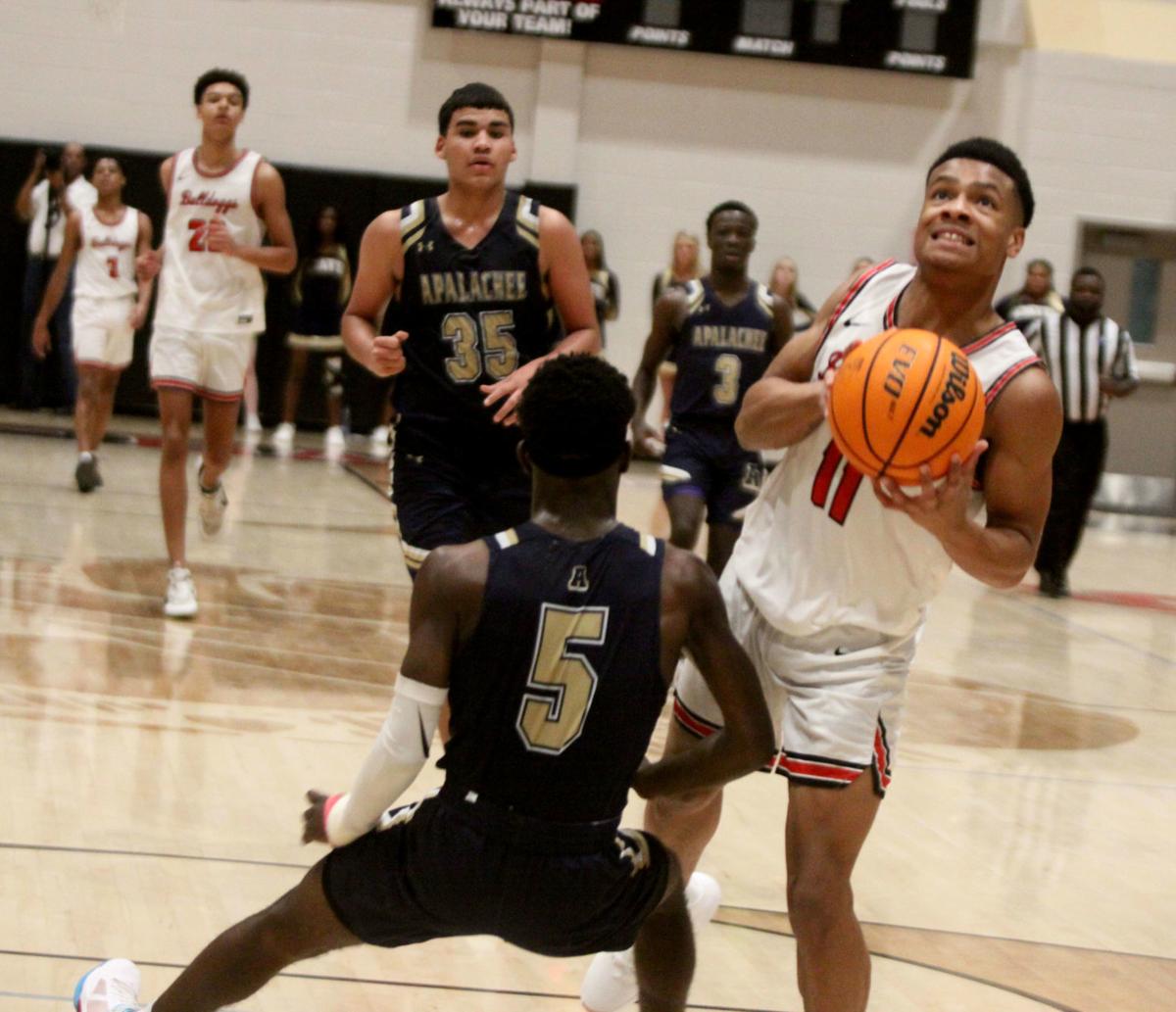 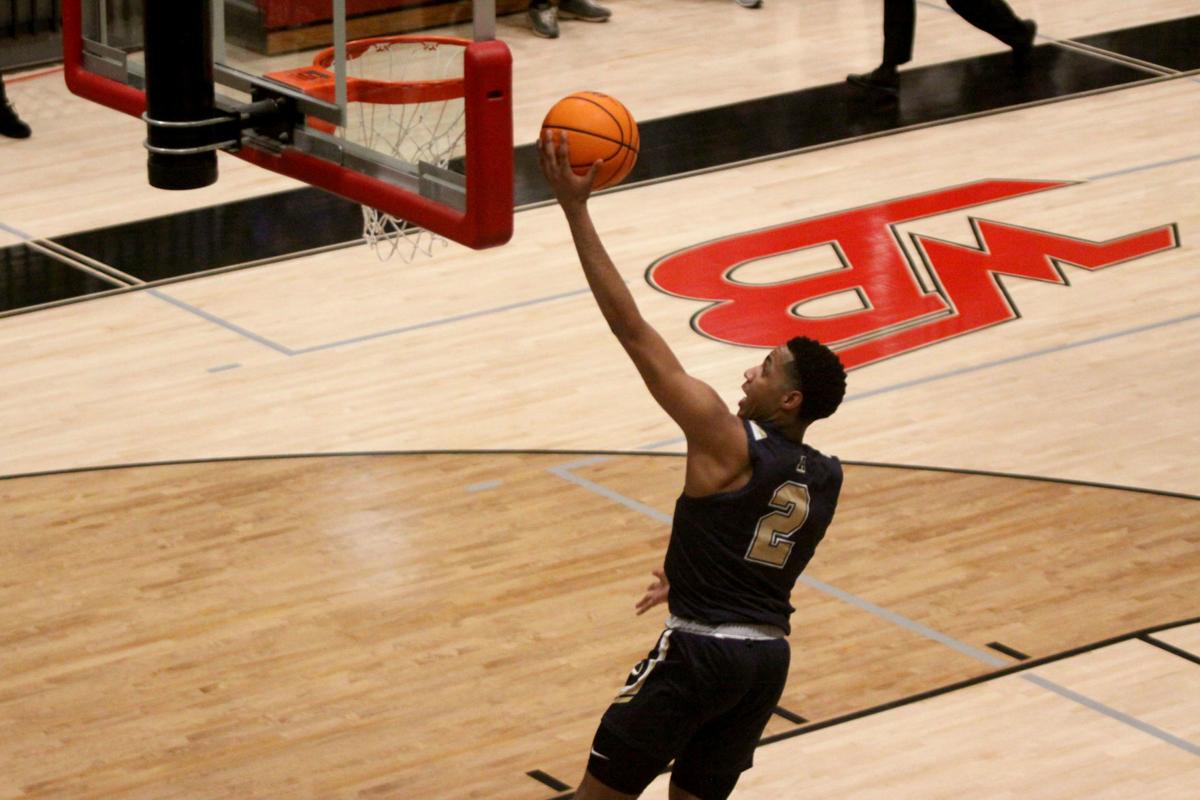 Apalachee's Brayson Hayes breaks away for a layup during the first quarter of Saturday's game. 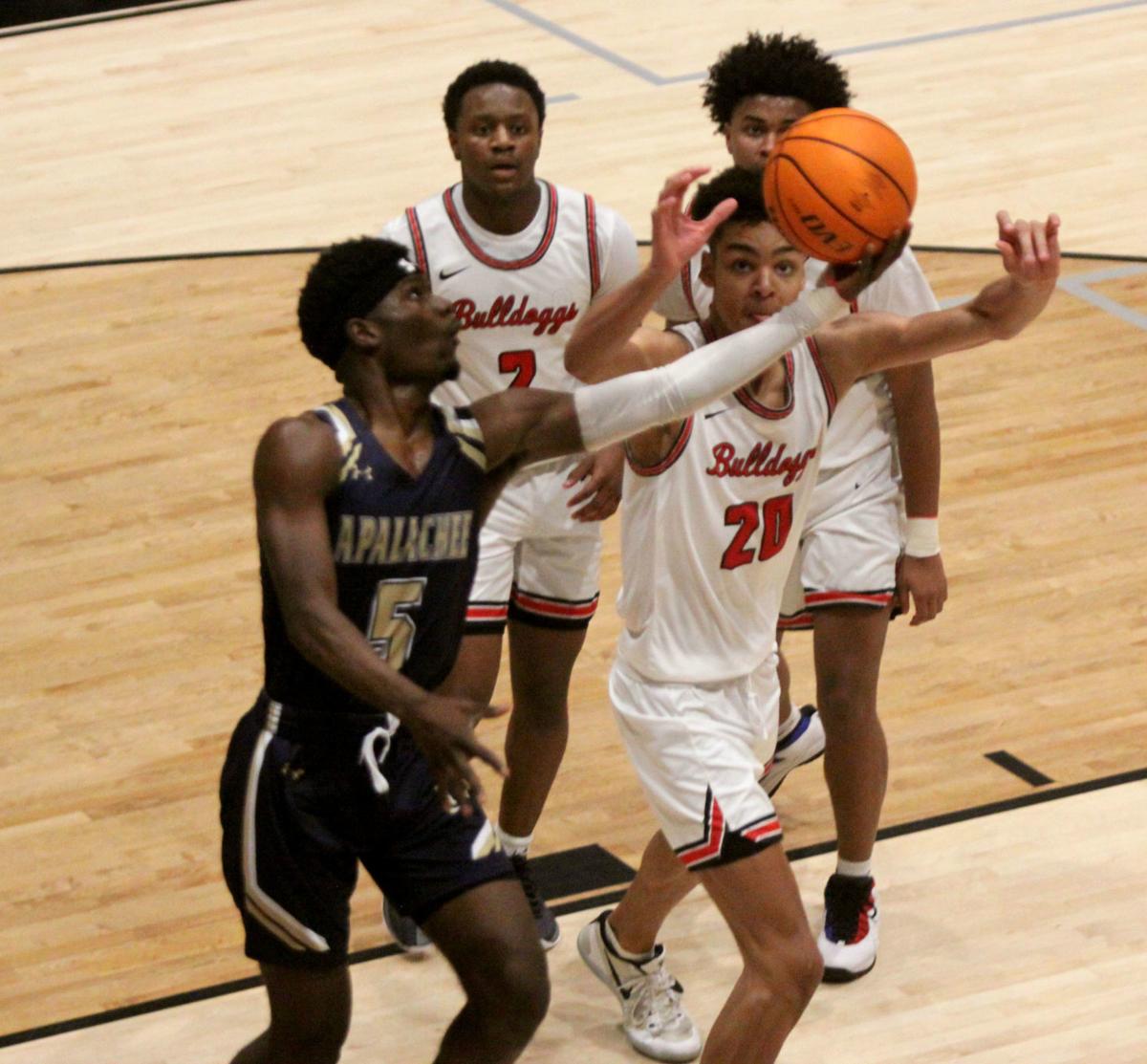 Winder-Barrow's Isaiah Nelson-Ododa blocks a Jamonte Wallace layup attempt during the first half of Saturday's game. 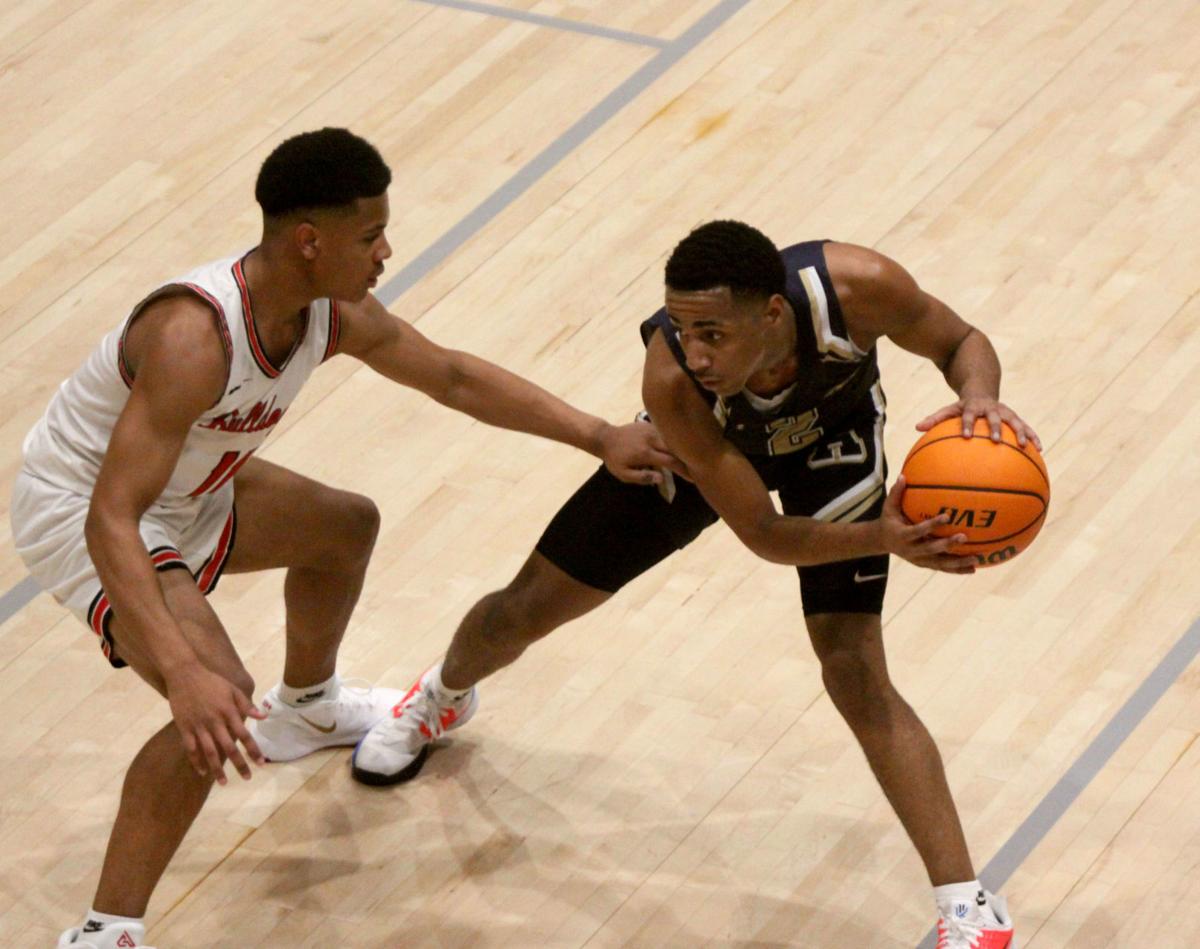 Apalachee's Brayson Hayes is guarded by Winder-Barrow's Tyreek Perkins during the first half of Saturday's game. 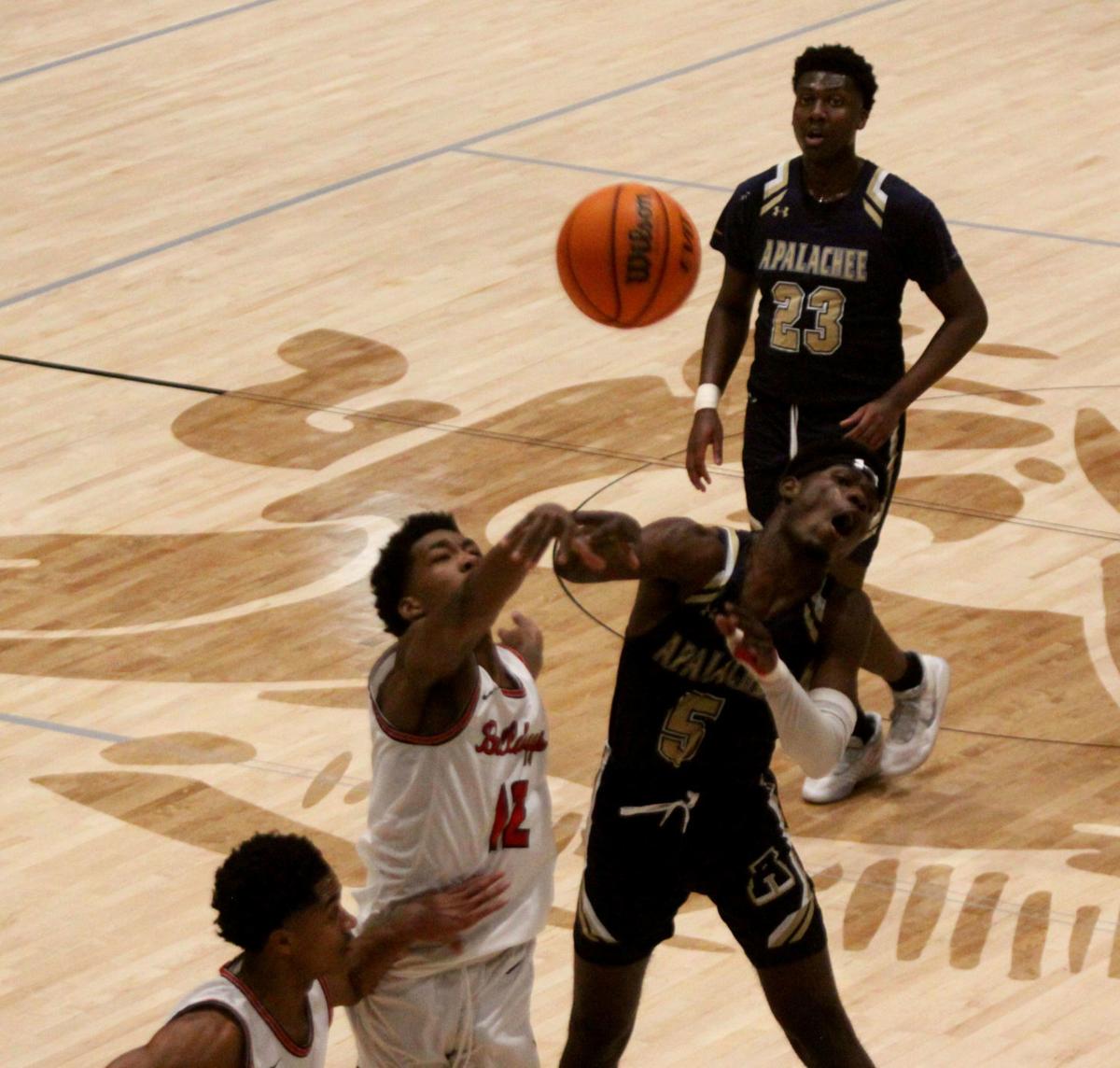 Winder-Barrow's Tim Loud blocks a Jamonte Wallace shot during the first half Saturday. 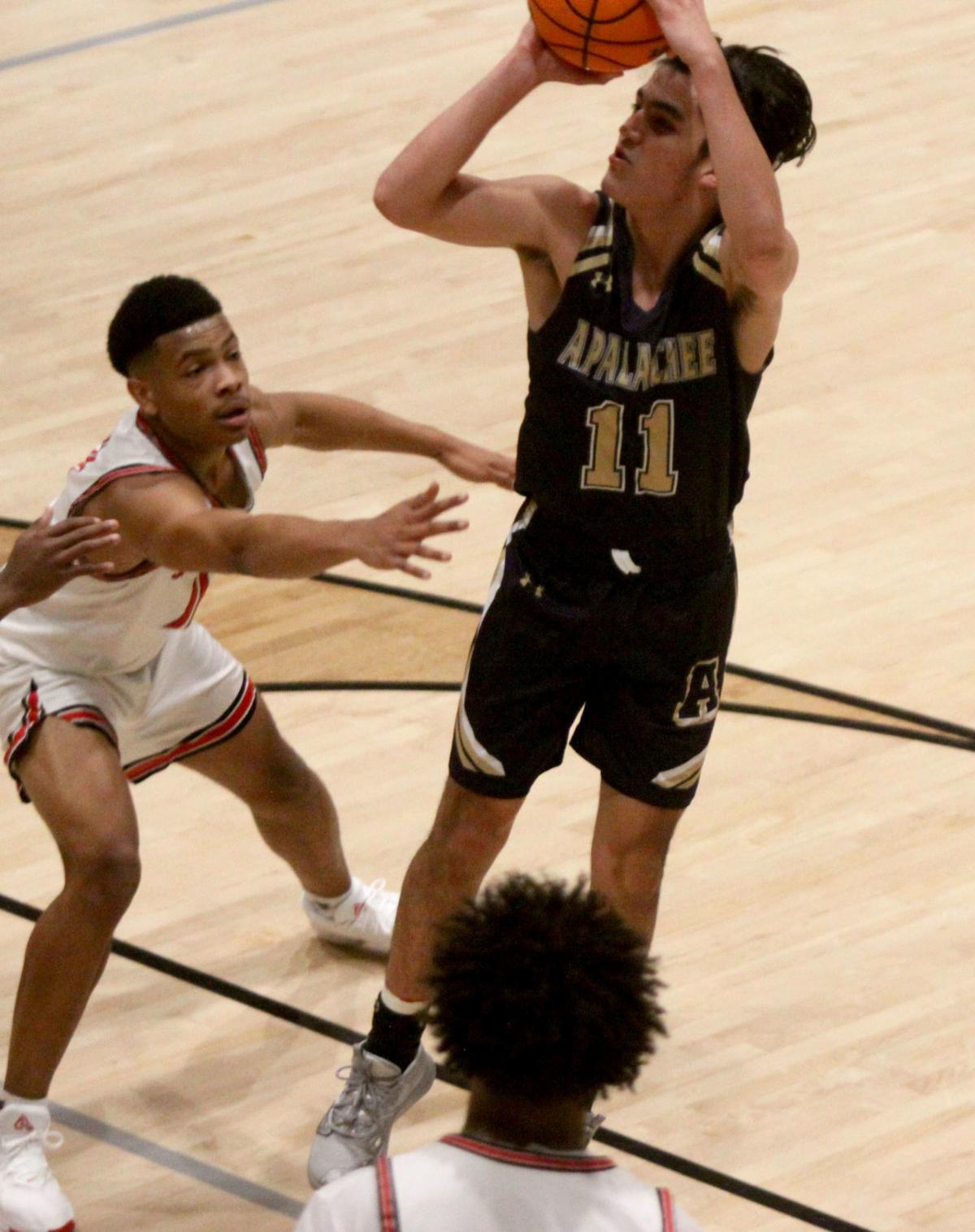 Apalachee's Jeremiah Chance takes a shot during the first half Saturday. 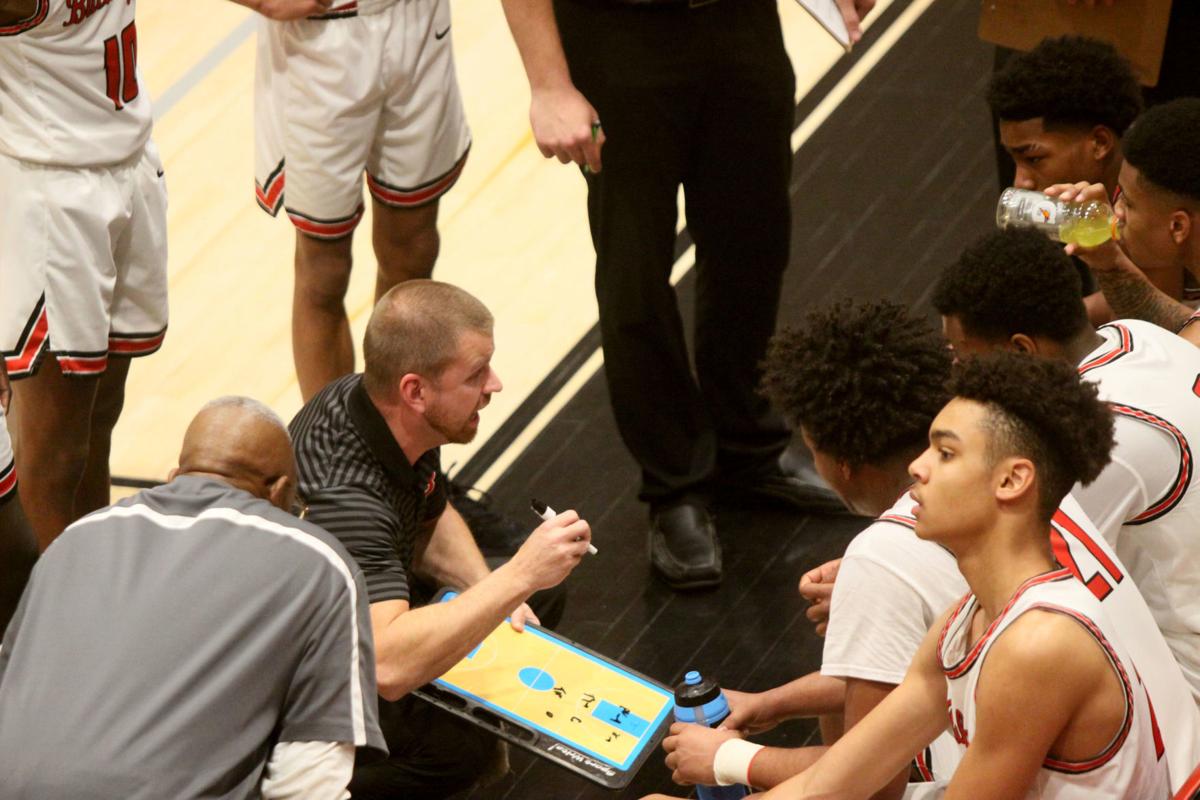 Winder-Barrow coach Travis McDaniel talks to his team in a timeout during the first half Saturday.

Winder-Barrow's Timmy Presley cracks a smile and celebrates with teammate Ahmad Scott after scoring a basket and drawing a foul during the second half of the Bulldoggs' 73-62 win over Apalachee on Saturday, Jan. 4.

Winder-Barrow's Tyreek Perkins drives the lane for score with a blocking assist from teammate Isaiah Nelson-Ododa.

Winder-Barrow's Tyreek Perkins passes the ball off during the second half of Saturday's game.

Winder-Barrow's Tim Loud hits a shot during the second half of Saturday's game.

Apalachee's Brayson Hayes breaks away for a layup during the first quarter of Saturday's game.

Winder-Barrow's Isaiah Nelson-Ododa blocks a Jamonte Wallace layup attempt during the first half of Saturday's game.

Apalachee's Brayson Hayes is guarded by Winder-Barrow's Tyreek Perkins during the first half of Saturday's game.

Winder-Barrow's Tim Loud blocks a Jamonte Wallace shot during the first half Saturday.

Apalachee's Jeremiah Chance takes a shot during the first half Saturday.

Winder-Barrow coach Travis McDaniel talks to his team in a timeout during the first half Saturday.

First-year Winder-Barrow head coach Travis McDaniel believes that two of the key factors to his team’s fast start this season have been a tougher resilience and the confidence that it can win any time it steps on the floor.

That grit was on display at home Saturday, Jan. 4, against crosstown rival Apalachee as the Bulldoggs found themselves in a 12-point hole after the first quarter but rallied to tie the game at the break and then steadily pulled away in the second half for a 73-62 victory in a GHSA Region 8-AAAAAA contest.

Senior guard Tyreek Perkins led the Bulldoggs with 26 points and 7 rebounds, while junior forward Isaiah Nelson-Ododa poured in 16 points and finished with 8 rebounds and 3 blocks to spur the win.

“Credit to Apalachee, they came out with great energy, ready to play, and punched us in the mouth off the jump, but I was really proud of our guys for bouncing back,” said McDaniel, whose team improved to 11-4 overall and 1-1 in region play a night after dropping its region opener 61-53 at fourth-ranked Lanier. “We talked at the end of the first quarter about how to respond, about it being a four-round match and that there was a lot of ball left to play. They threw the first punch, but I thought we responded well and were in control of the game from that point on.”

Sparked by senior guard Brayson Hayes’ 11 first-quarter points, the Wildcats (4-10, 0-2 region) got off to a quick start, using strong defense to create easy scoring opportunities in transition. Hayes, who finished with a team-high 21 points, knocked down a pair of 3-pointers late in the opening period to give his team a 21-9 advantage after the first eight minutes.

But Winder-Barrow went on a 12-0 run to start the second quarter and tied the game. After Jeremiah Chance came off the bench and drilled a couple of 3-pointers to put the Wildcats back up by six, the Bulldoggs went on another run to tie it again at the half. The rally was capped when Cam Stillwell stole a pass and drove down a clear lane for a layup and a foul with 1.1 seconds left in the half. Stillwell’s free throw completed the three-point play and made it a 31-31 contest as both teams went to the locker room.

The Bulldoggs went on a 9-0 run midway through the third quarter — sparked by five quick points off the bench from Tim Loud — to grab a 10-point lead and seize full control of the game. They stretched that lead to as high as 19 points halfway through the fourth and Apalachee never cut it closer than 10.

“We got some stops and steals and I thought we were really unselfish early,” Apalachee coach Ty Rowland said. “But then when they made their run in the second quarter, we kind of reverted back. Every region game, there’s going to be so much adversity, especially in a rivalry game, and we didn’t handle that adversity very well tonight.

“But give a ton of credit to (Winder-Barrow). A lot of teams that get popped like that early back down, and they did the exact opposite. Coach McDaniel did a great job of making some adjustments and getting his guys back in it. It was a little deflating for us in that we felt like we were playing better than them, and then you look at the scoreboard and it’s (tied) at the half. They’ve got some really good players over there.”

McDaniel took over the Winder-Barrow program last summer following the retirement of long-time head coach Ron Garren and has the Bulldoggs on track for their first winning season in several years and in position to possibly make their first state tournament since the 2016-17 campaign. The former Lanier and Discovery assistant inherited a team with plenty of returning experience, but the Bulldoggs have found another gear under his leadership.

“When I got here, part of it was trying to get the guys to believe that we can win,” McDaniel said. “And we’d been doing enough of the little things — preseason lifts, conditioning, film work, prep work — to where we deserved to win, and then we went out early this season and beat some quality teams like St. Pius and Jefferson. And now we’re at the point where we went in against a top-five team like Lanier expecting to win. I’ve just been really fortunate to have a group that’s truly bought in to what we’re doing.”

The Bulldoggs have been fueled by the steady hand of Perkins and the emergence on the inside of a more dominant Nelson-Ododa, who has sprouted to 6-foot-10 and put on weight to become a tougher, more forceful player down low. The younger brother of former Lady Bulldogg standout All-American and current Connecticut forward Olivia Nelson-Ododa, Isaiah is ranked among the country’s top 150 juniors, according to Rivals, and has drawn interest from several NCAA Division I programs with offers from Georgia Tech and Iowa State topping his list.

“Isaiah was awesome tonight. He was super-efficient and played with an incredible motor,” McDaniel said. “He’s got a little mean streak in him and he gets to that edge, but never over the boiling point. As talented as he is, I tell him all the time, ‘There’s a target on your back every night. Guys are going to come in and be physical with you, and you’ve just got to be able to handle it and play your game.’ And he’s starting to really rise to the occasion. He gets better every night out for sure.

“And then Tyreek has just been so consistent for us. We go as he goes, and he’s a huge reason we’ve had the success we’ve had with his senior leadership. He’s not just great on the court, but he’s awesome in the locker room, too.”

McDaniel also praised the performances of Loud, who he described as a “microwave” off the bench, and Stillwell, who played solid defense against Apalachee senior point guard Jamonte Wallace.

“Cam’s defense has been amazing all year, and he did a great job on a heck of a player (in Wallace). That’s probably as good as that kid’s been guarded.”

Wallace, an all-state selection as a junior and four-year starter for the Wildcats, had an uncharacteristically off night shooting, finishing with just 8 points. He also found himself in foul trouble and was assessed a technical foul (one of two against Apalachee on the night) late in the third quarter, which forced him to the bench for the final period.

The two technical fouls were “something that’s disappointing for me because I feel like that’s a reflection on me,” Rowland said. “I always feel like a coach has some control over that and I obviously didn’t do a good job with that tonight. We’ll find ways to learn from it, I hope, but the key to tonight’s game, to me, was when stuff got hard we got very selfish, and guys felt like they had to do it all by themselves.

“Jamonte’s been our leader and a vocal leader this year, too, so not having him down the stretch hurt us. “He’s the guy that tries to keep us in the right positions and can take control of the game. And with him struggling tonight, he tried to force a lot and create too much on his own. I think that created some tough situations, and we know he has to be that guy that stays poised and keeps the rest of the team calm.”

Both Winder-Barrow and Apalachee have eight region games remaining before next month’s region tournament. The Bulldoggs will host Habersham Central on Tuesday, Jan. 7, while the Wildcats play at home against Gainesville the same night.

For the Bulldoggs, McDaniel said the key will be continuing to maintain their edge and intensity.

“It’s a super-competitive region,” he said. “Any given night, it’s going to be a dog fight. This one (against Apalachee) didn’t end up looking like it, but we had to fight our tails off to get this one.”

For Rowland, whose Wildcats went just 2-8 in region play last regular season but then won the region tournament in his first year at the helm, he hopes the next four weeks will see the Wildcats be a more consistent team and put more complete games together.

“We’ve been here before and we’ve got four or five guys who have been a part of the rotation and know what it takes,” Rowland said. “But there are some other guys in our lineup who haven’t, so it’s going to be a learning curve. And it’ll come at them fast.

“I know this loss is going to feel like forever to them in the moment, but the positive is you get to play again in three days. We’re going to have a chance to bounce back, and if we can take the good from our fast start and keep the foot on the pedal, I think we’ll be fine.”