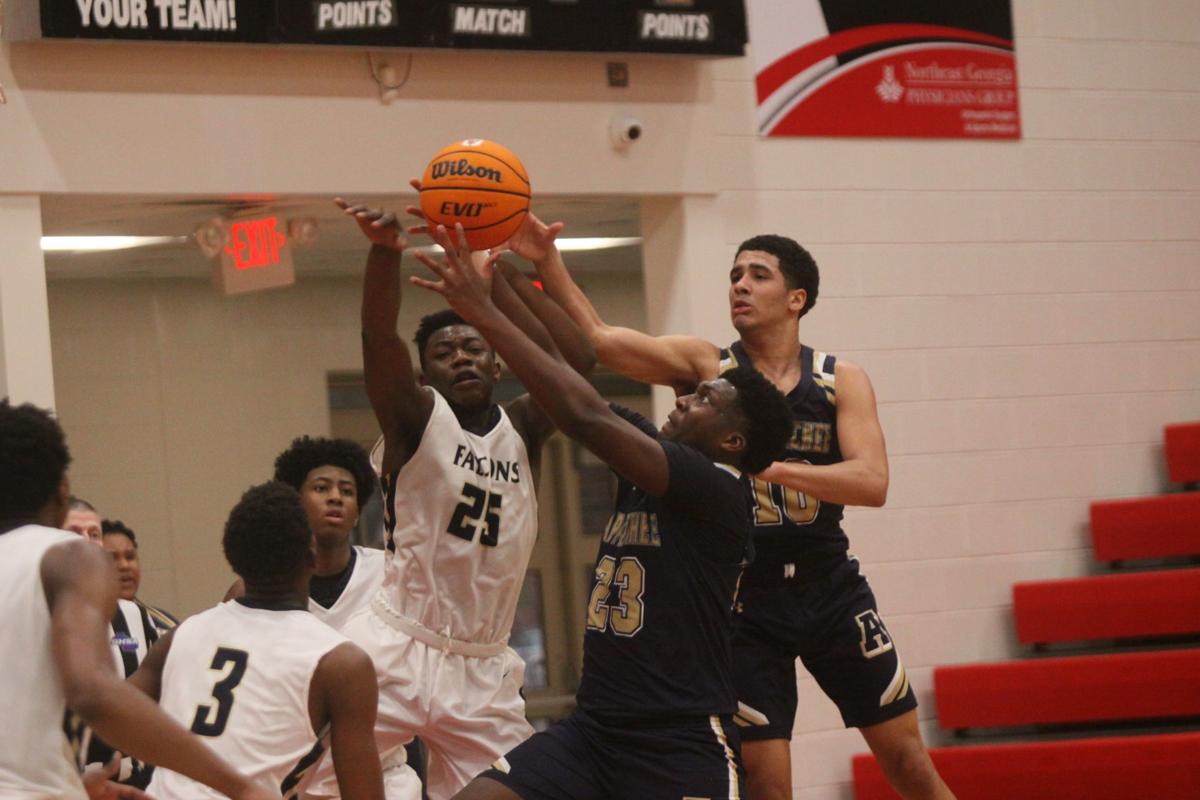 Apalachee's Quincy Tate (23) and Shaan Cook battle for a rebound during the Wildcats' 80-75 double overtime loss to Dacula in the first round of the GHSA Region 8-AAAAAA tournament at Gainesville High School on Feb. 6. 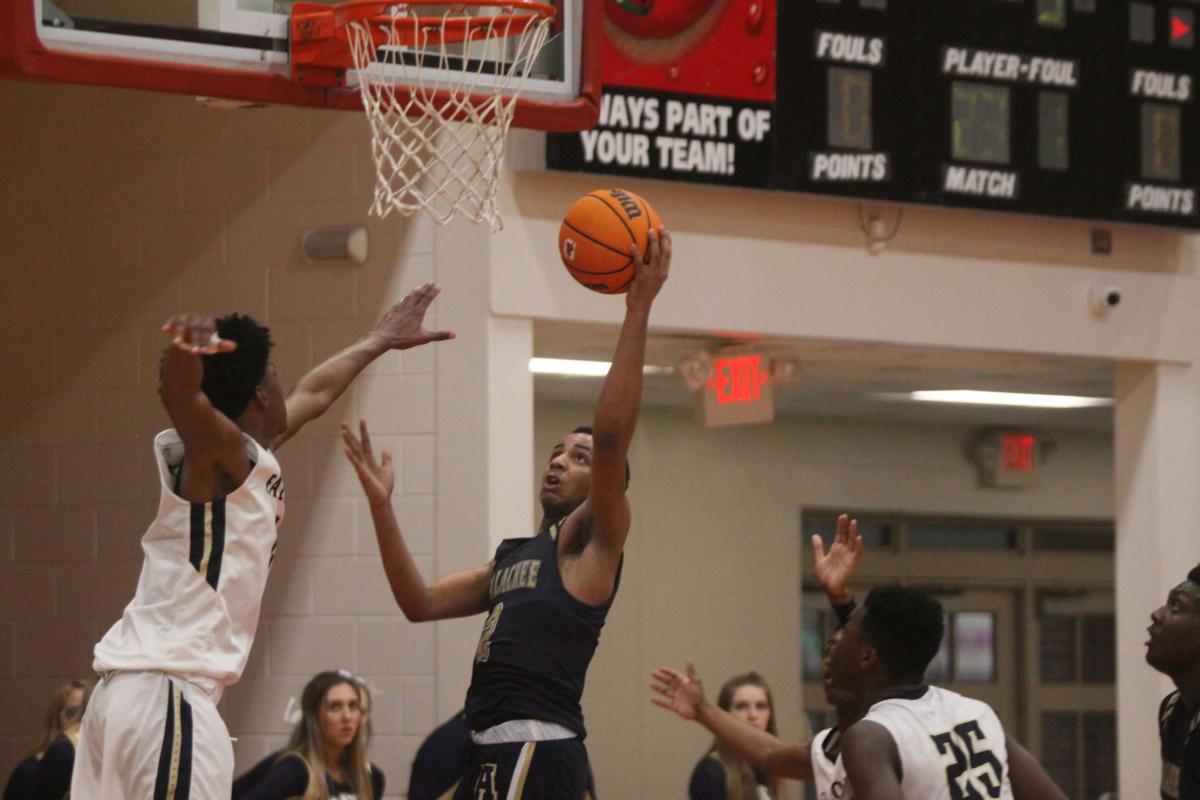 Apalachee senior Brayson Hayes scores on a layup late in the fourth quarter against Dacula. 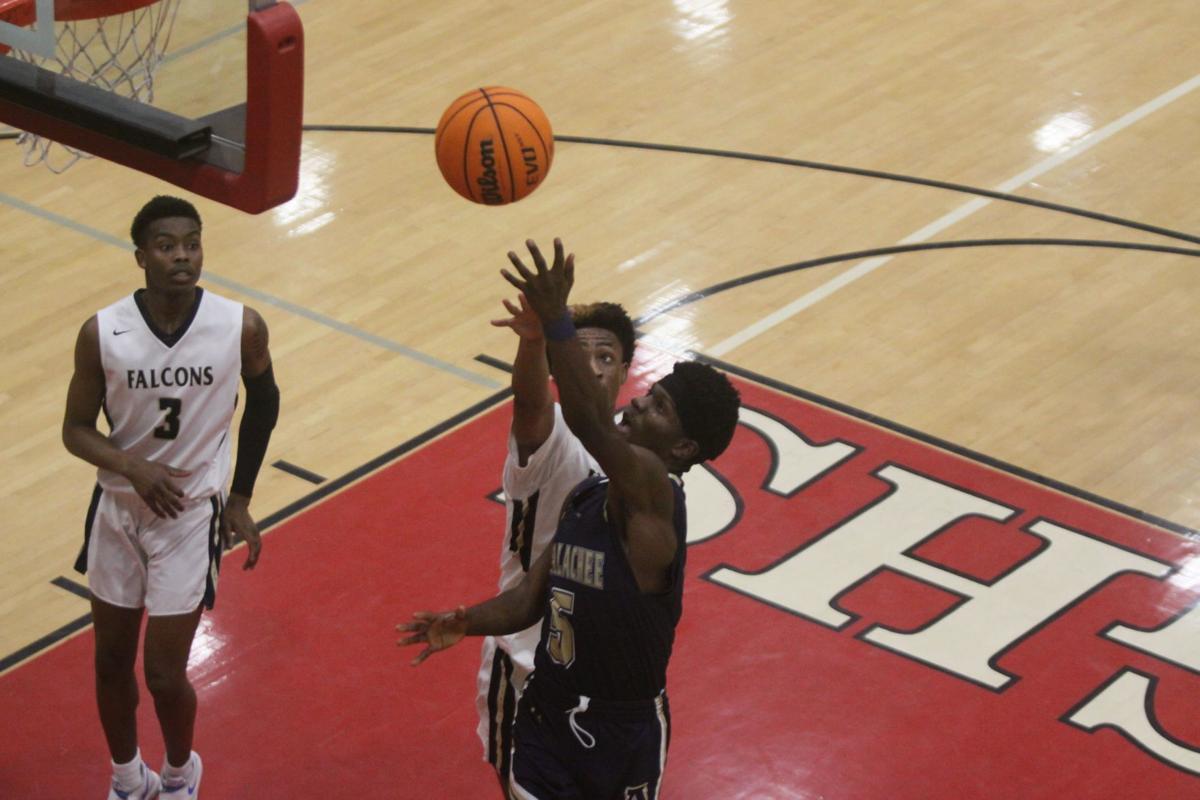 Apalachee senior and four-year starter Jamonte Wallace scored 27 points to lead the Wildcats in the final game of his high school career. 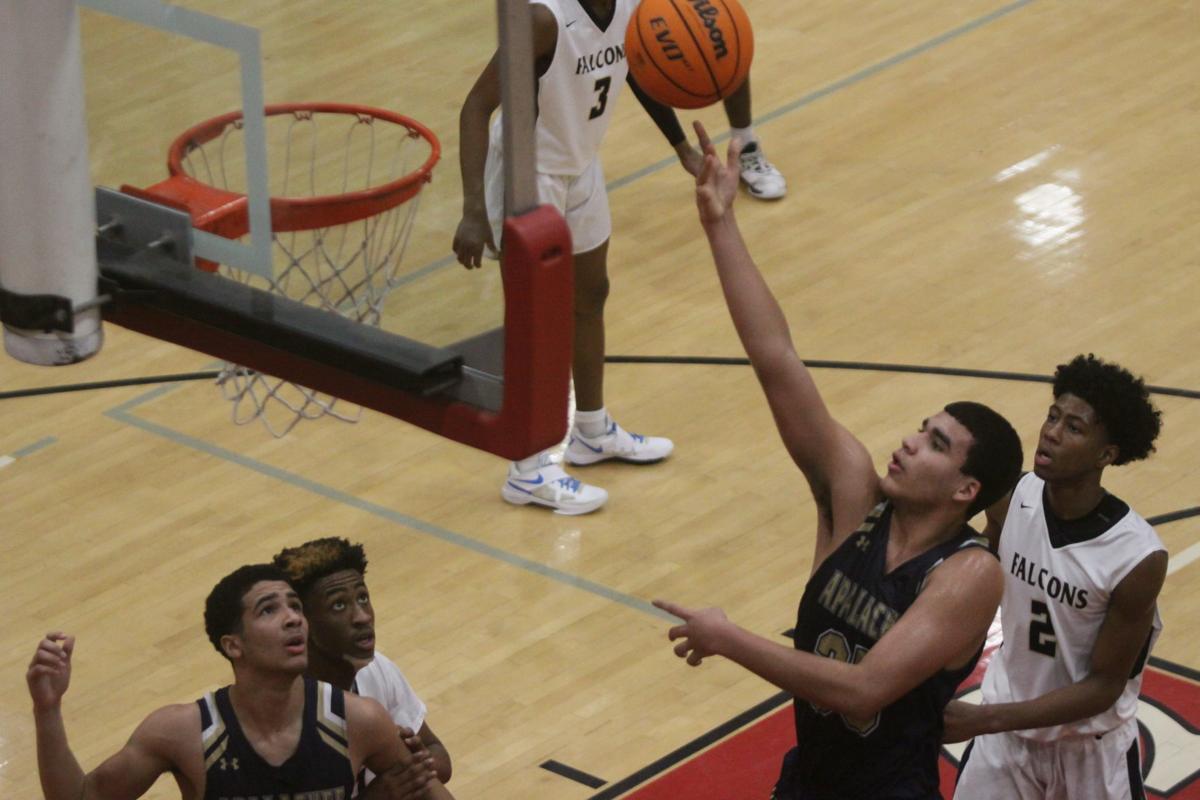 Apalachee's Josue Caples Torres scores on a layup during the first half against Dacula. 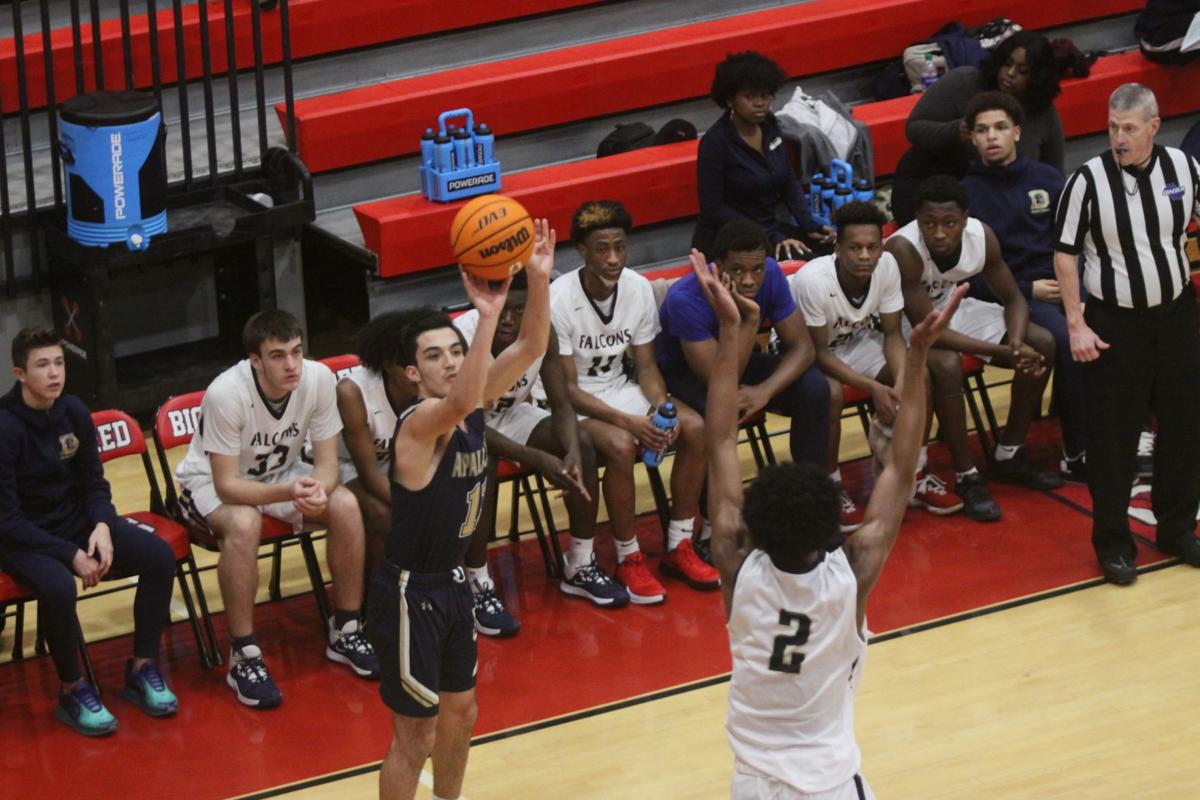 Apalachee's Jeremiah Chance shoots a 3-pointer during the first half against Dacula. 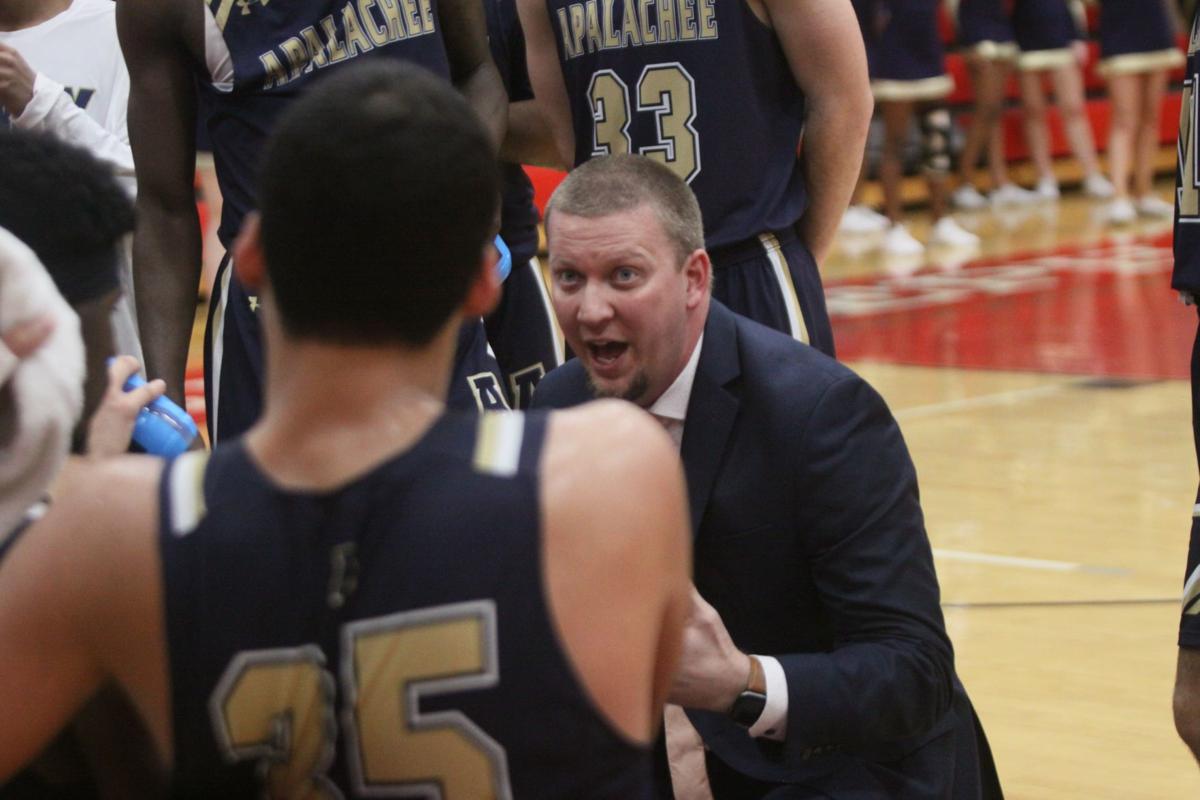 Apalachee coach Ty Rowland talks to his team during a timeout in the fourth quarter against Dacula.

Apalachee's Quincy Tate (23) and Shaan Cook battle for a rebound during the Wildcats' 80-75 double overtime loss to Dacula in the first round of the GHSA Region 8-AAAAAA tournament at Gainesville High School on Feb. 6.

Apalachee senior Brayson Hayes scores on a layup late in the fourth quarter against Dacula.

Apalachee senior and four-year starter Jamonte Wallace scored 27 points to lead the Wildcats in the final game of his high school career.

Apalachee's Josue Caples Torres scores on a layup during the first half against Dacula.

Apalachee's Jeremiah Chance shoots a 3-pointer during the first half against Dacula.

Apalachee coach Ty Rowland talks to his team during a timeout in the fourth quarter against Dacula.

There was no Cinderella championship run through the GHSA Region 8-AAAAAA tournament this year for the Apalachee boys’ basketball team.

Instead, the Wildcats found themselves on the heartbreaking end of a back-and-forth, double-overtime thriller against Dacula on Feb. 6, falling 80-75 to the Falcons in the first round of the region tournament at Gainesville High School and seeing their season come to a close.

The fifth-seeded Wildcats (5-18) had rallied from down five in the final 1:28 of regulation to force overtime and taken a two-point lead on a Shaan Cook 3-pointer with 18 seconds left in the first overtime period, only to see fourth-seeded Dacula rally to force a second extra period and pull away in the final minute.

“That’s got to be one of the best games I’ve ever been a part of, certainly as a coach,” Apalachee second-year coach Ty Rowland said as a pair of dejected seniors consoled each other nearby. “Nobody deserved to lose that one. Their coach told me that after the game and I really believe that. We both fought so hard down the stretch, and we had some guys make some enormous plays.

“…I really felt like, with the energy we played with tonight, we should have walked away with a win. But it doesn’t always work out that way for you.”

The game remained tight throughout with neither team leading by more than five points throughout regulation. Apalachee senior Brayson Hayes, who finished with 26 points, capped the fourth-quarter comeback with the Wildcats’ final five points of the fourth quarter, including a three with 4 seconds left to send the game to overtime.

The Falcons scored the first five points of the extra period, but the Wildcats clawed their way back in it and appeared poised to walk away with the win when Cook launched his three from the corner. But the Falcons got a layup by Lamariyon Jordan with 6.7 seconds left, and Jamonte Wallace’s 3-point attempt on the other end at the buzzer came up short.

The Wildcats took a 71-69 lead with 1:52 left in the second OT on a floater by Hayes and — after Dacula’s Khari Person missed one of two free throws on the other end — appeared to be in good shape. But in what turned out to be a consequential call, Hayes was whistled for a five-second violation, which the Apalachee bench disputed to no avail.

On the next possession, Camron Carithers ripped a three that put the Falcons up 73-71 with 1:07 left and jumpstarted a run that saw the Falcons go up 77-71 with 28 seconds to go. The Wildcats didn’t go away, getting a free throw from Quincy Tate and then a three from Wallace off a turnover to cut it to 77-75 with 17 seconds left. But Dacula got a free throw from Person and then following a Tate miss, Person raced down the court and slammed it home to cap the victory.

Rowland said he thought Hayes had broken the screen in time to avoid the five-second call and paraphrased Boston Celtics coach Brad Stephens.

“There really are no such things as the little things,” he said. “You realize the consequences of the little things and there are no little things. If we didn’t get the call and were able to hold onto the ball there, I think we walk away with the win.”

Instead, Rowland and the Wildcats were left with a bitter ending to what was ultimately a frustrating season. Apalachee will now have to replace the production of six seniors who made up the team’s primary seven-man rotation this year. Chief among the departures will be four-year starting guard Jamonte Wallace, who was an all-state player his junior season. Wallace led the Wildcats with 27 points in the loss to Dacula.

“I have nothing but positive things to say about the way we fought,” Rowland said as he prepared to head to the locker room to address his team. The two players still sat nearby quietly.

“The trials and tribulations we went through, so many tough losses and nights where we didn’t show up,” Rowland said. “And then we start 0-9 in league play before we beat Habersham (Central). I really felt like that win was going to catapult us in the right direction. But I felt like we gave it everything we had and I can’t ask for any other thing from them. I just feel for those seniors.

“You can’t replace guys like that. It’s going to be tough shoes to fill, but right now I’m just worried about their hearts and I need to go love on them. Hopefully a couple of them get to play in college, and hopefully all of them stick around the program in the years to come.”