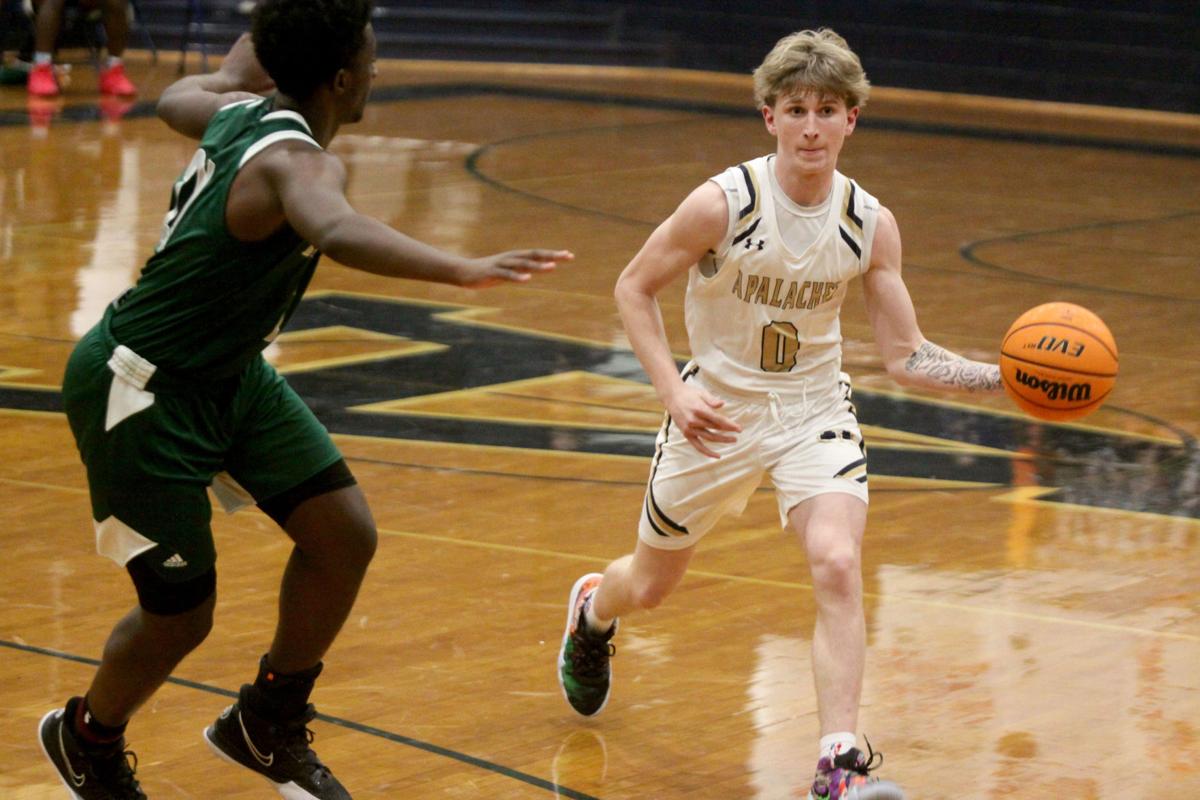 Apalachee senior guard Chase Reed has been a key player for the Wildcats this winter as a first-year starter. 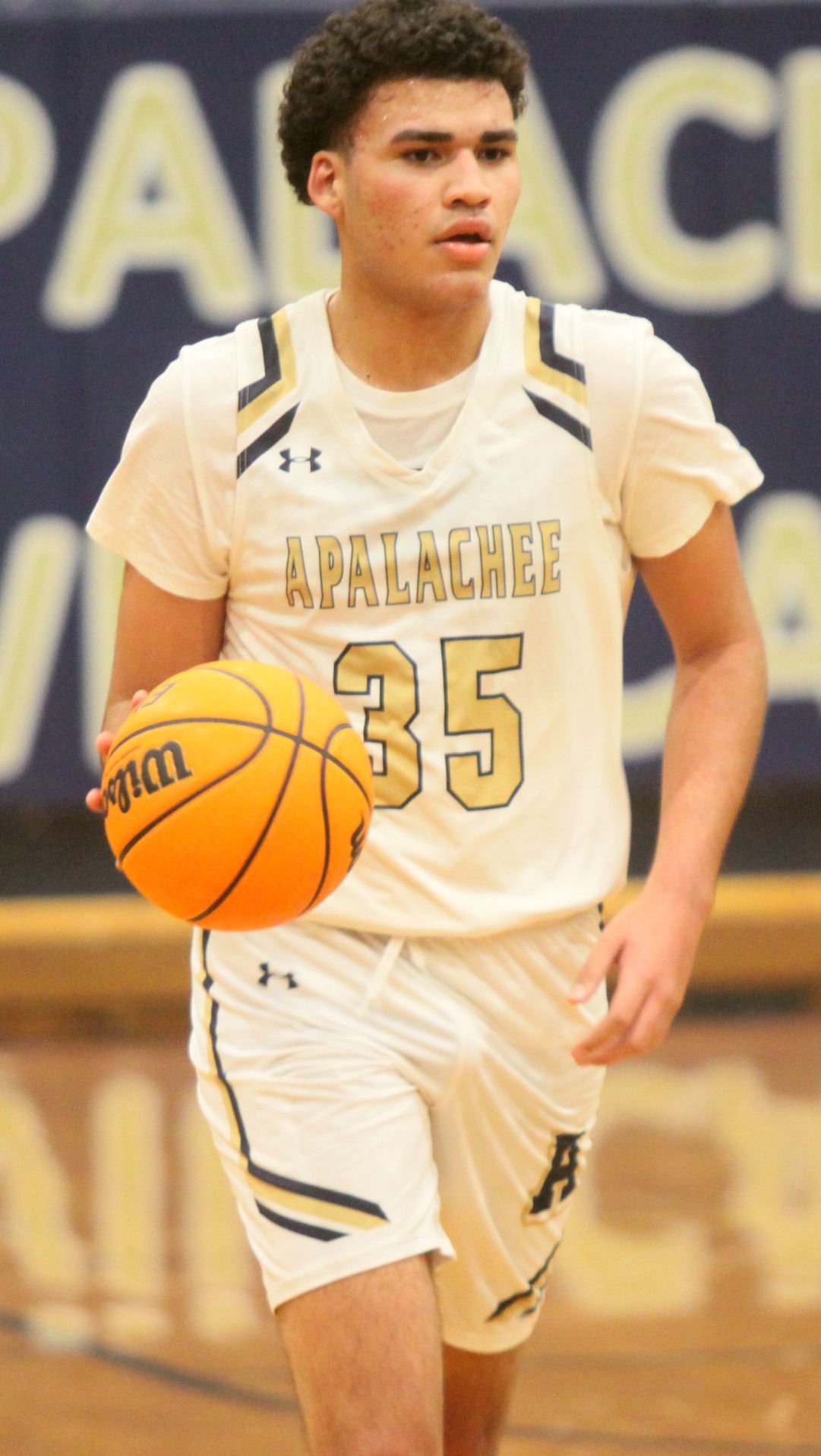 Apalachee junior Josue Capeles Torres has averaged a double-double in points and rebounds the second half of the season. 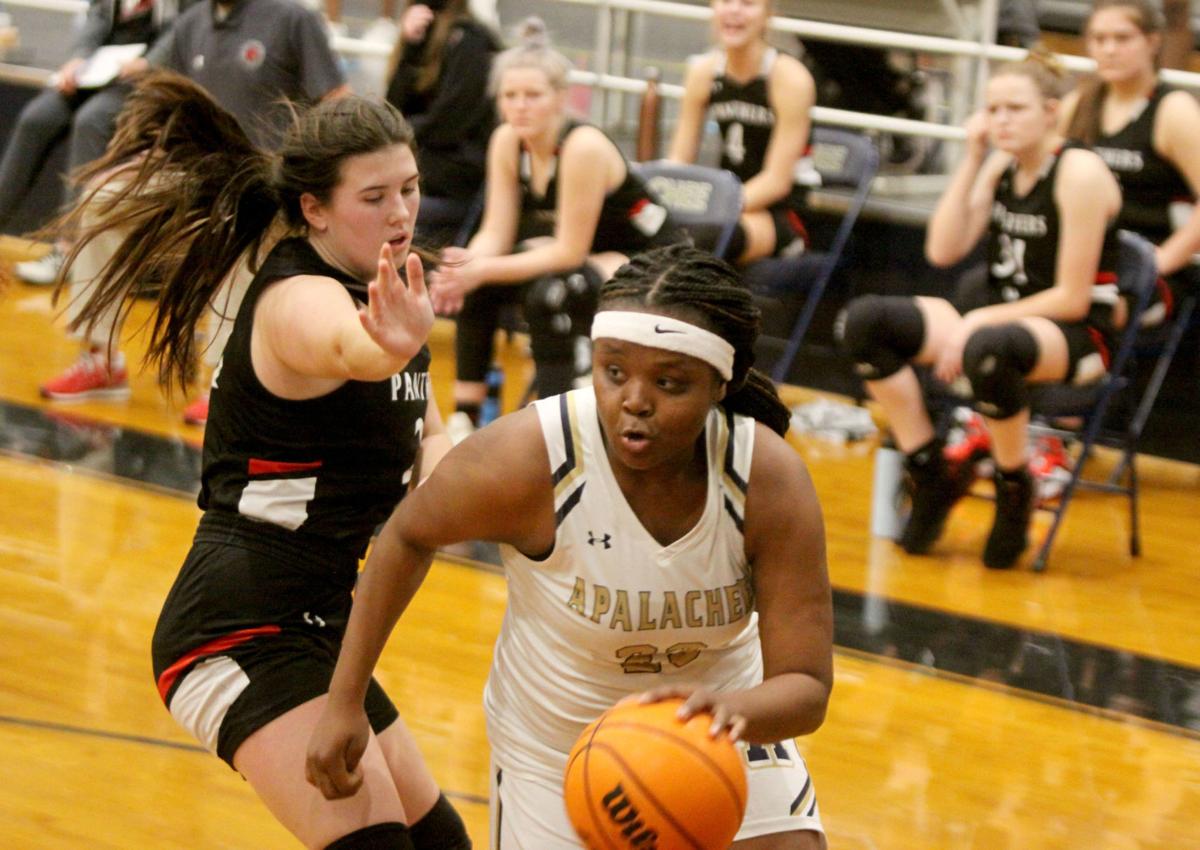 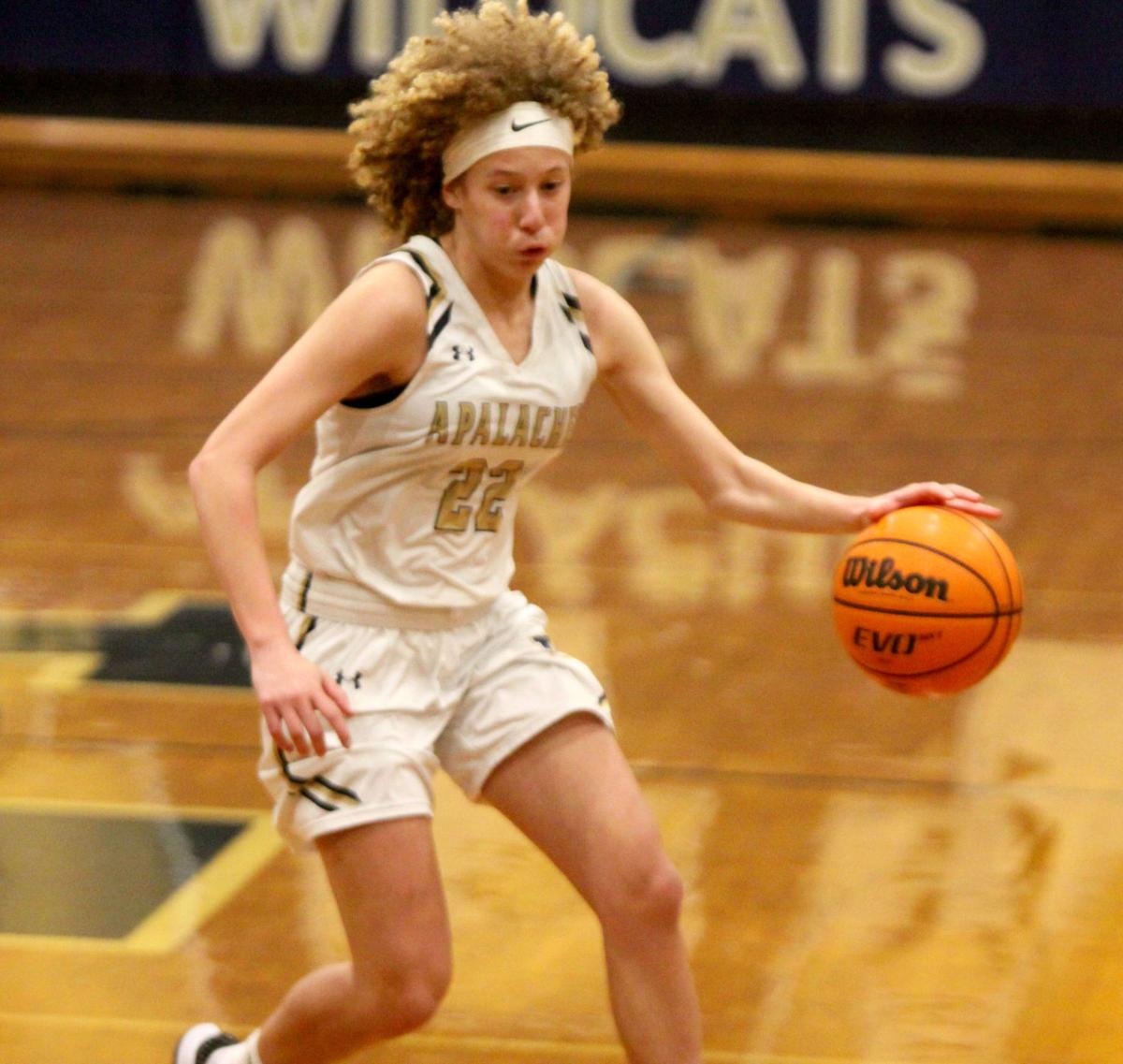 Apalachee's Averie Akin has been one of a handful of key sophomore contributors this year for the Lady Wildcats.

Apalachee senior guard Chase Reed has been a key player for the Wildcats this winter as a first-year starter.

Apalachee junior Josue Capeles Torres has averaged a double-double in points and rebounds the second half of the season.

Apalachee's Averie Akin has been one of a handful of key sophomore contributors this year for the Lady Wildcats.

Both the Apalachee boys’ and girls’ basketball teams will face tall tasks Monday, Feb. 15, in the opening round of the GHSA Region 8-AAAAA tournament if they want to keep their seasons alive. But both squads’ coaches believe they are playing some of their best basketball on the season with a win-or-go-home game confronting them.

Apalachee’s girls will visit Walnut Grove in the first round of the tournament for a 2 p.m. matchup Monday, while the Wildcat boys will make the 2 ½-hour trek to Evans to face Greenbrier at 5 p.m. The winners of those games will advance to the tournament semifinals at Walnut Grove — Feb. 17 for girls and Feb. 18 for boys — and the consolation and championships games are scheduled to be played Feb. 20 at WGHS.

The Apalachee boys (5-14, 4-10 region) moved up to the No. 6 seed in the eight-team region tournament after being rewarded a forfeit win in their would-be regular-season finale against Jackson County on Friday, Feb. 5, when the Panthers were sidelined due to a team COVID-19 quarantine. Prior to that, they had won three of their last four games — on the heels of a 13-game losing streak — and pulled off a 69-67 double-overtime upset at Loganville their last time on the floor Feb. 2.

“It’s unfortunate with that long drive that we may not have a lot of fans, but that adds to the mentality that our bench has got to be really good throughout the game. It’s another piece of adversity that we’re ready to tackle,” Apalachee coach Ty Rowland said. “(Greenbrier is) a good team. They’re third in the league for a reason. We were fortunate to be able to sneak one out against them a couple weeks ago, and I just hope that we aren’t satisfied with that. If you can’t get jacked up for a game like this, maybe you’re not in the right sport, but I’m sure they like this matchup and the fact that we upset them last time could add even more intensity.

“I think winning three out of four has brought some life and confidence to our team. We’ve been in two dogfights (in the first round of the region tournament) the last two years, so we’ve seen what this point of the season offers. After this was dubbed a rebuilding season considering all the seniors we lost from last year, we knew we were going to have a long road. But I love the confidence we’re playing with right now. All some kids need is a glimpse of success and what can be accomplished if you continue to work hard.”

Apalachee returned just one varsity starter and player from last season’s main rotation, but the Wildcats have seen steady improvement from the newcomers to the lineup — including senior guard Chase Reed, who had a career-high 30 points in last week’s win at Loganville. The X-factor, though, Rowland said, has been junior forward Josue Capeles Torres, the team’s lone returning starter, who has averaged a double-double (12.1 points, 10.6 rebounds) since the start of January.

“He’s been huge for us,” Rowland said. “Between some early injuries and the COVID quarantines, he never gotten to have any consistency or get into a groove, but he had high hopes for himself and we had high hopes for him. He’s really worked on his game a lot through a tough year, getting better with his ball-handling, being able to play inside and out. And now his effort has really shown lately, and he’s been enormous for us. He’s so good at helping us, even when the ball isn’t in his hands every possession.”

The Wildcats will be going up against a deep Greenbrier team, where, Rowland said, “every kid can do a little bit of everything.” Beyond 6-foot-6 junior forward Davin Driskell, the Wolfpack are a predominately guard-heavy team and will likely defense Apalachee aggressively.

“They can all shoot, dribble and drive, and there’s nobody that you feel like you’ve got to guard differently, but that’s what makes them such a dangerous team,” he said. “Any of them can make a shot or give you a little something at the rim, and that makes them hard to scheme against.”

While the two previous long COVID-related layovers for the Wildcats earlier in the season led to some sluggish play coming out of them, Rowland believes this 13-day period between games will be beneficial for his team as it logs crucial practices ahead of the tournament battle.

“I think it’s great when it comes to scouting,” Rowland said. “We’ll know the ins and outs of Greenbrier. We’ll have a week to study every player and be ready for any wrinkle they might throw in. And we can just be focused on this one opponent.

“The first time we played them, we did not handle their half-court trap well at all. It forces you to make quick basketball plays downhill, which hasn’t always been our strength. But we handled it a whole lot better with more patience and didn’t get as rattled the second time around. It comes down to us being able to take care of the basketball and making sure we make every possession matter in a game like this.

“Preparation will help, and the more we can see on film and drill it in practice, the more comfortable we’ll be come game time. Preparation breeds confidence.”

Apalachee’s girls were initially scheduled to also travel to Greenbrier on Monday for the first round of the tournament, but with Eastside being forced to sit out and end its season with a team-wide COVID quarantine, the Lady Wildcats (5-17, 3-11) moved up to the No. 6 seed and will now try to knock off third-seeded Walnut Grove (12-9, 9-3).

Apalachee lost its first contest against Walnut Grove 47-25 at home on Jan. 5, but Lady Wildcats coach Derrick Allen said the team had an improved performance in a 53-43 road loss to the Lady Warriors on Jan. 29.

“It was a one-possession game with six minutes left, and we just didn’t shoot well enough and had some costly turnovers down the stretch,” Allen said. “But we’re confident that we can go in and put 32 minutes together and hopefully come away with a win on Monday.”

Like the Apalachee boys, the Lady Wildcats entered the year with a young team that has had to learn on the fly. They’ve leaned heavily on junior forward Jasmine Williams, who has averaged double figures in points and around 8 rebounds per game. A core group of sophomores — Centerria Marks, Averie Akin, Ka’Niyah Swan and Carlie Lumpkin — along with freshman Hannah Hollingsworth have all played at least 20 games this season.

“We’ve taken some hits, but the experience alone has been invaluable,” Allen said. “We’re moving more at varsity speed, and we’re pleased with the progress. It hasn’t always spelled out for us in terms of win, but we’re gaining meaningful experience, and we’re playing much better as a team.

“In my book that makes us dangerous, but we’re going to need a huge effort to win this one.”

Allen expects Walnut Grove to continue to deploy an “old-school” man-to-man defense and said his players getting their timing right will be critical to their chances of success.

“We got behind them a couple times last game, but we weren’t doing a good enough job of looking for the ball,” Allen said. “We just have to address it and clean it up in practice. They might throw a wrench in there and zone us a little bit, but you tend to hang your hat on what got you here and I see no reason why they wouldn’t mainly stick to what they’ve been having success with.

“We’re looking forward to challenge. I think the progress we’ve made this year through the good, bad and ugly has set us up nicely. Turnovers have been our Achilles heel, but if we can take care of the ball, we should have a decent chance.”