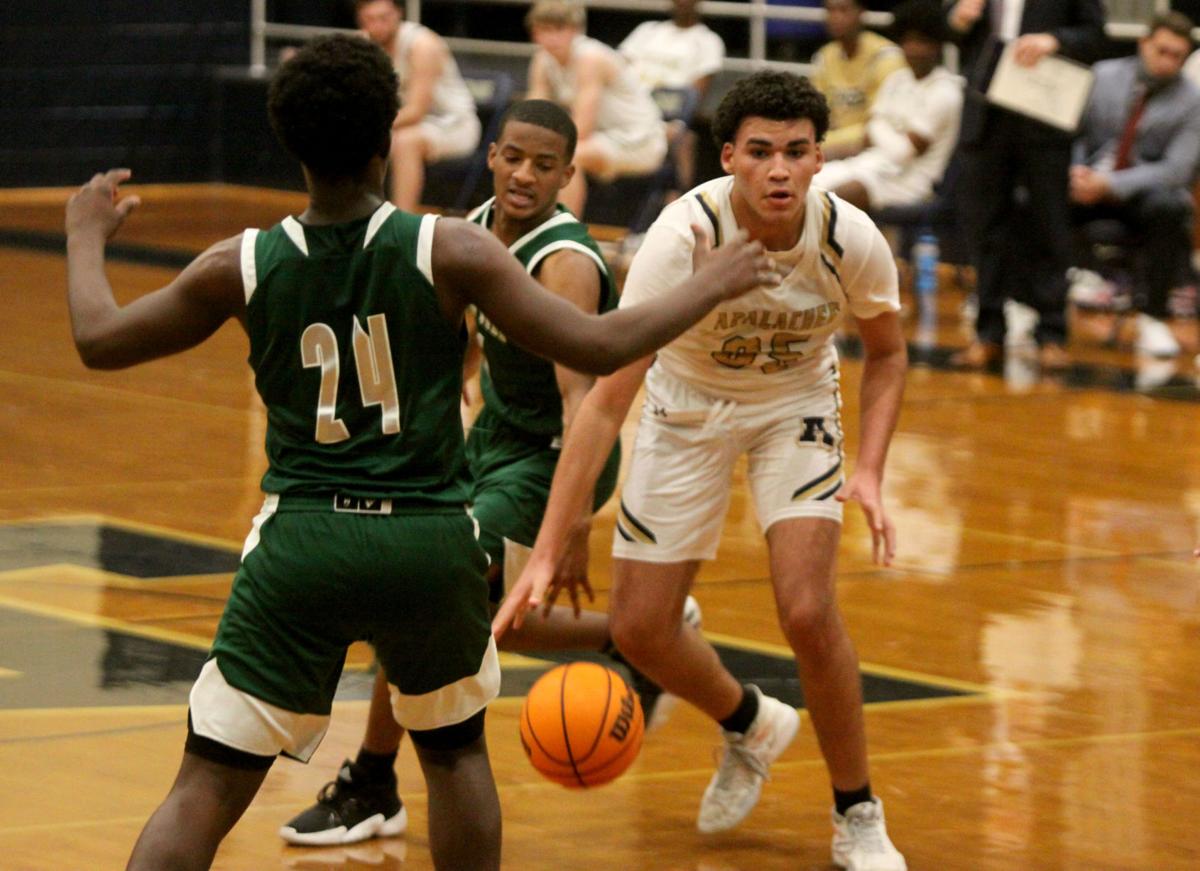 Apalachee junior Josue Capeles Torres works the ball up the court during the Wildcats' home game against Eastside on Friday, Jan. 15. 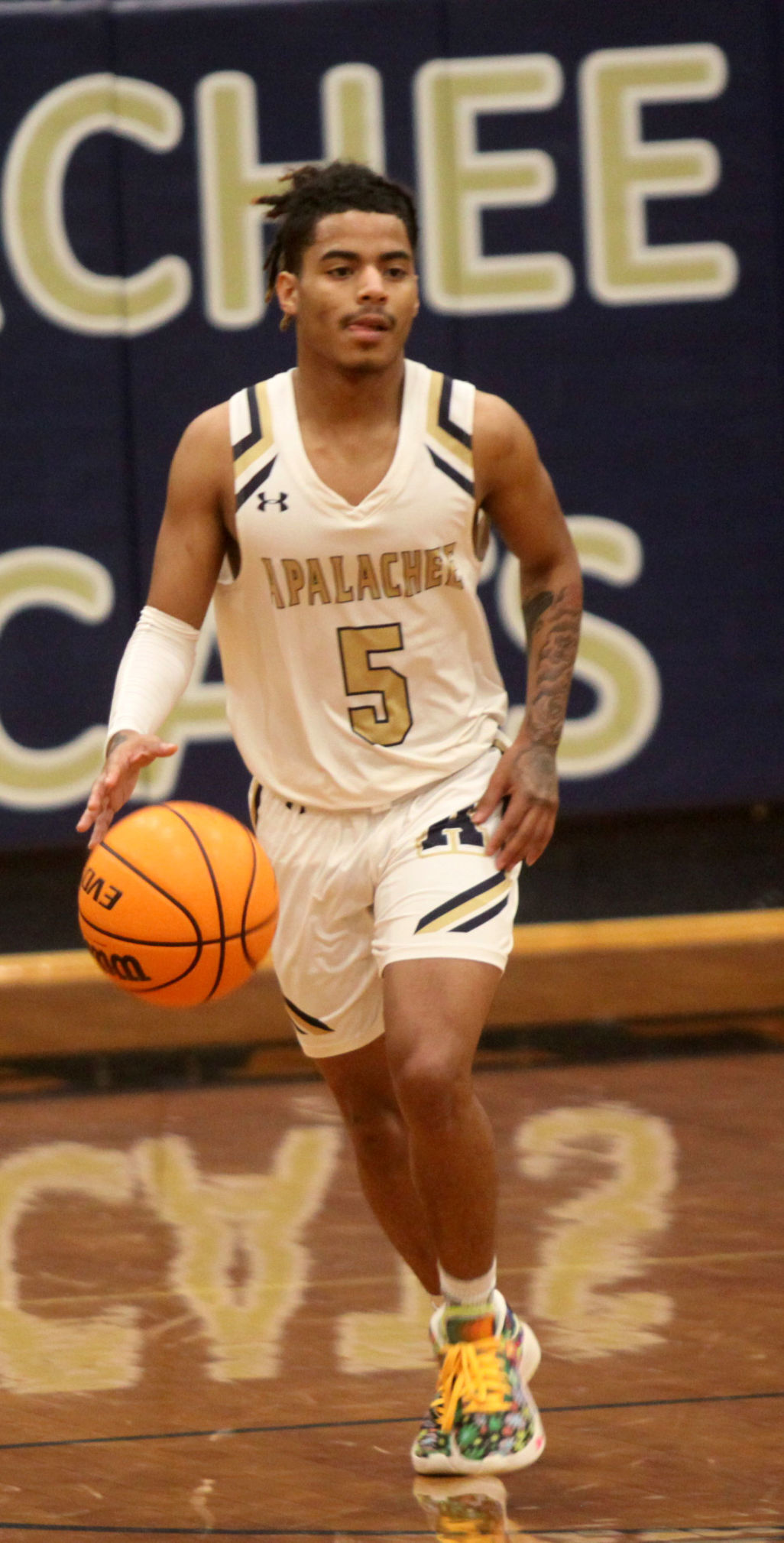 Apalachee junior point guard Elijah Contreras is one of several Wildcat starters and main-rotation players getting their first season of extensive varsity play this year.

Apalachee junior Josue Capeles Torres works the ball up the court during the Wildcats' home game against Eastside on Friday, Jan. 15.

Apalachee junior point guard Elijah Contreras is one of several Wildcat starters and main-rotation players getting their first season of extensive varsity play this year.

It’s been two months since Apalachee’s boys’ basketball team recorded its last win, when the Wildcats held off North Springs 63-57 in their season opener on Nov. 20.

Since then, Apalachee has dropped 12 straight contests, with a third of those losses coming by a single possession. Needless to say, it has been a grind for the Wildcats, who returned only one player this year with extensive varsity playing experience and who had a 10-day layoff due to a team-wide COVID-19 quarantine earlier in the season. But while an abundance of youth and inexperience have led to inconsistency on the floor during games, what hasn’t wavered is the team’s effort, Apalachee coach Ty Rowland said this week.

“The progress we’ve made is tough to see at times when we’ve struggled to get out of the loss column,” said Rowland, whose team was looking to halt its skid, Wednesday, Jan. 20, in a GHSA Region 8-AAAAA battle at Clarke Central. “We’ve had a handful of games where we were right there but couldn’t finish, and that’s just part of the learning process for guys who haven’t been in these situations before. We have an entirely new team this season, so we knew there would be a learning for how to win games, and unfortunately we haven’t been able to pull off much.

“And it’s not just one thing you can pinpoint, but the positive is we battle every game. We’re not going to fold up and throw in the towel. Most games, we’ve been competitive, especially in the first half, but then the third quarter has been our nemesis. More experienced teams make adjustments, and we haven’t been ready to attack those.

“It’s definitely been a struggle mentally for me and the kids being able to stay locked in, but we’ve figured it out and are going to show up ready to play. We’re a little behind these teams right now with skill, physicality and size-wise for the most part, but we’re continuing to battle.”

Many of the issues that have plagued the Wildcats in games this season were present again Friday, Jan. 15, when they lost to Eastside 63-42 at home, to drop to 1-12 overall and 0-8 in region play. The Eagles, who are part of a multi-team logjam near the top of the region standings, broke a tie midway through the second quarter with a big run to carry a 32-23 lead into halftime and then took advantage of several Apalachee turnovers and missed shots to pull way ahead in the third quarter.

“I think sometimes maybe we’re getting too impatient. We usually have a good plan of attacking, but the turnovers have been a huge nemesis for us,” Rowland said, noting that the Wildcats are averaging 22 giveaways a game. They also are shooting under 30 percent from the floor and have struggled at the free-throw line as well.

“No kid ever tries to turn the ball over or miss a shot; it’s on us coaches to give them the tools for how not to turn it over so much,” Rowland said. “And what can help us more is taking an extra dribble, not rushing things. If you’re going to drive into a trap, have a plan for what you’re going to do with the ball. Don’t push the ball up the base line aimlessly without having a plan of attack. Those things are easier said than done when you’re going up against good teams like Eastside, who are really athletic and play hard and physical defensively.

“I feel like mentally our guys are learning a lot about the game and attacking the defenses they see; it’s just sometimes we’re physically unable to get the ball in those positions to be able to finish or execute a play. What can be deflating as a player, is when you did everything right but just didn’t knock the shot down. But as a coach, I gain more confidence from that because I know we can make the right plays and eventually will execute them.”

After Wednesday’s game, the Wildcats have five more regular-season games — all region contests — leading up to the start of the region tournament Feb. 15.

“Until we actually win one of these games, it’s always a battle to have the confidence to win,” Rowland said. “But if we can get a couple in this final stretch, maybe surprise a team or two, that will certainly boost our confidence in the tournament, where we win one game and we’re in the playoffs. There’s still a lot to figure out with the seeding, and we’re gearing toward playing our best basketball when Feb. 15 comes around.

“Certainly, I think this team has not reached its potential yet.”