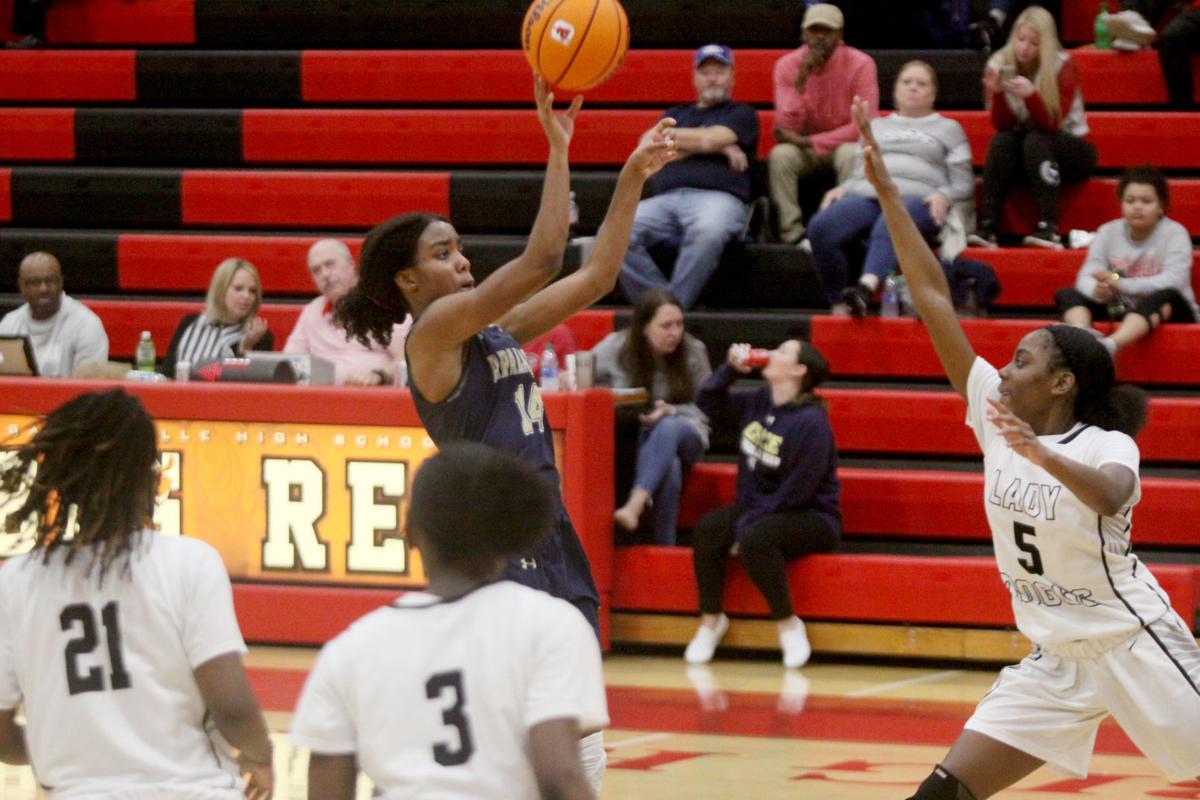 Apalachee senior Joanna Gross shoots a 3-pointer in the second half of the Lady Wildcats' loss to Winder-Barrow in the first round of the GHSA Region 8-AAAAAA tournament at Gainesville High School on Feb. 6. 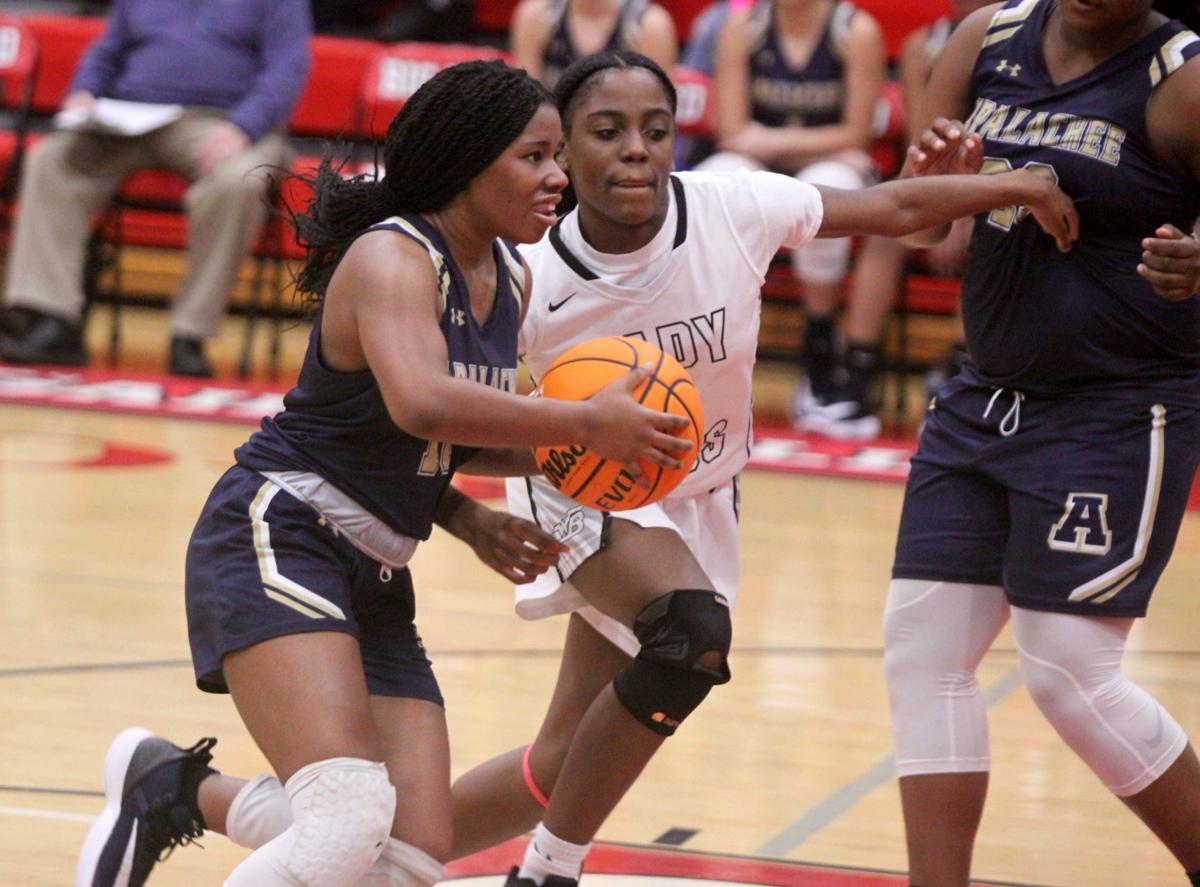 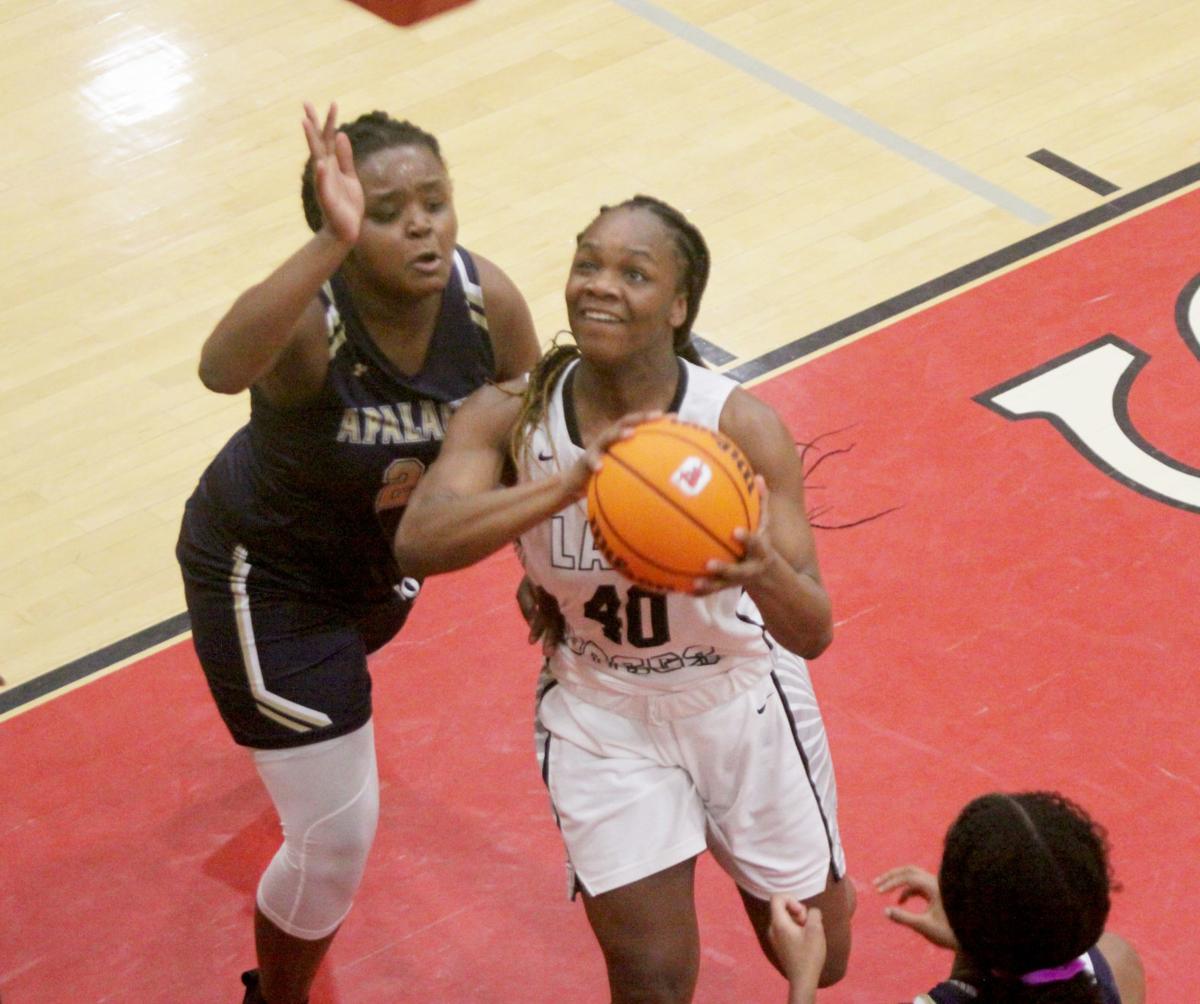 Apalachee sophomore Jasmine Williams guards against Winder-Barrow's Taniyah Parris during the first half. 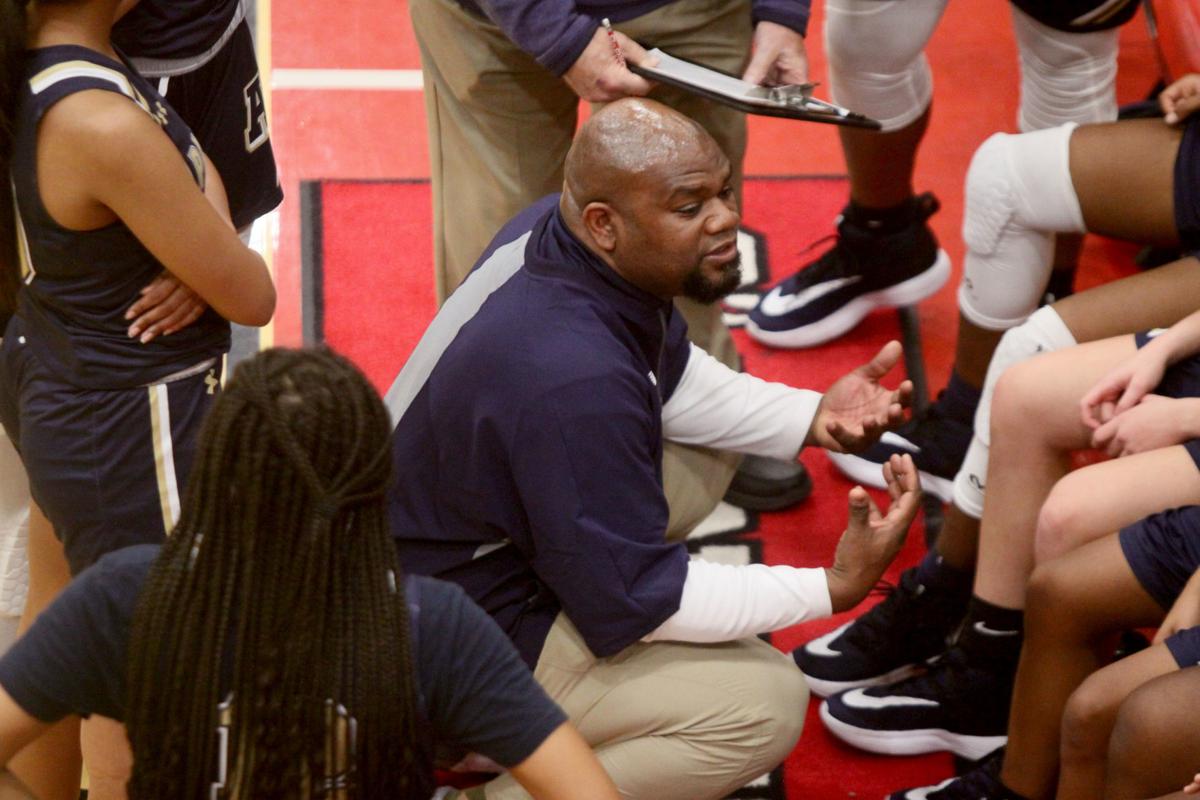 Apalachee coach Derrick Allen talks to his team during a timeout in the Lady Wildcats' first-round region tournament loss to Winder-Barrow.

Apalachee senior Joanna Gross shoots a 3-pointer in the second half of the Lady Wildcats' loss to Winder-Barrow in the first round of the GHSA Region 8-AAAAAA tournament at Gainesville High School on Feb. 6.

Apalachee sophomore Jasmine Williams guards against Winder-Barrow's Taniyah Parris during the first half.

Apalachee coach Derrick Allen talks to his team during a timeout in the Lady Wildcats' first-round region tournament loss to Winder-Barrow.

The 2019-20 season was not the one Derrick Allen necessarily envisioned when he took over the Apalachee girls’ basketball program, seeking to lead the Lady Wildcats to a state playoff berth.

A rough campaign that saw the Lady Wildcats win just two games came to an end Thursday, Feb. 6, as they fell 64-37 to Winder-Barrow in the first round of the GHSA Region 8-AAAAAA tournament at Gainesville High School.

After Apalachee senior J’Nai Holloway scored the first points of the game with a 3-pointer in the first minute, the Lady Bulldoggs went on an 18-0 run to blow it open early. As with the teams’ first two meetings, Winder-Barrow used a heavy full-court press that forced the Lady Wildcats (2-24) into several turnovers, resulting in easy buckets.

The Lady Wildcats were able to cut the deficit down to 10 at 29-19 late in the second quarter but the Lady Bulldoggs went on a 9-0 run to close out the first half and continued to pull away after the break.

“They’re well-coached, and they play 84 feet of defense and you’ve got to take care of the ball,” Allen said after the loss. “We’ve been working on it but it’s hard to simulate that in practice. They get you playing faster than you want to go and that leads to mistakes. And we had some great first-shot opportunities, but it was a bad shooting night for us.”

It was the final game for four Apalachee seniors, including forward Joanna Gross, who earned all-region honors. Gross finished with 5 points. Fellow senior Kesley Knox led the Lady Wildcats in scoring with 9 points. Kelly Richardson and Holloway had 3 points apiece.

“They did everything they could to the best of their abilities and I couldn’t be prouder of them,” Allen said. “They’re family for life as far as I’m concerned. They weren’t the ones I had to worry about not coming to practice. They were the hardest workers and we’re indebted to them. They’ve set the bar to let those younger girls know what it’s going to take to compete at the next level.”

If Apalachee is to reverse its fortunes next season, two underclassmen who will be counted on to spearhead that turnaround will be Jasmine Williams and Averie Akin. Williams wrapped up her sophomore season with a 7-point output and some solid play inside. Akin, a freshman, scored 8 points and showed promising 3-point range this winter.

“We’ve got some building blocks and a couple of lanky eighth-graders we’re going to take a look at over the summer,” Allen said. “Our work’s cut out for us. It’s a guard-driven league and we ask the guards to do the heavy lifting as far as facing pressure, getting the ball over half-court, getting into our offense and setting up shots. We needed to be a little bit better with the ball and we weren’t.

“But that’s why we live for this stuff. We’ll get to the summer and start all over again. …We’ve got a lot of younger players in the program, but I think going forward we’re going to be alright.”