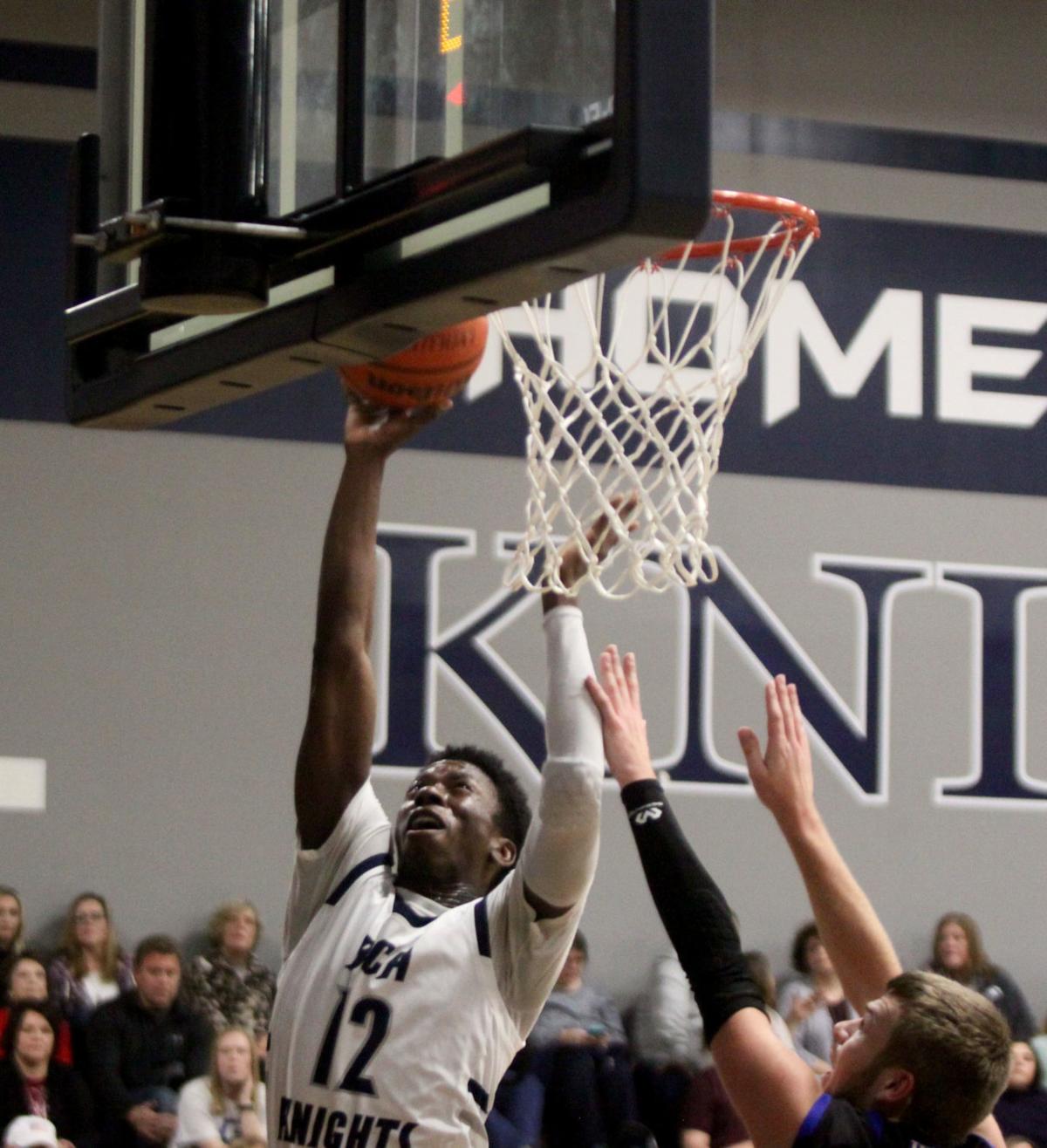 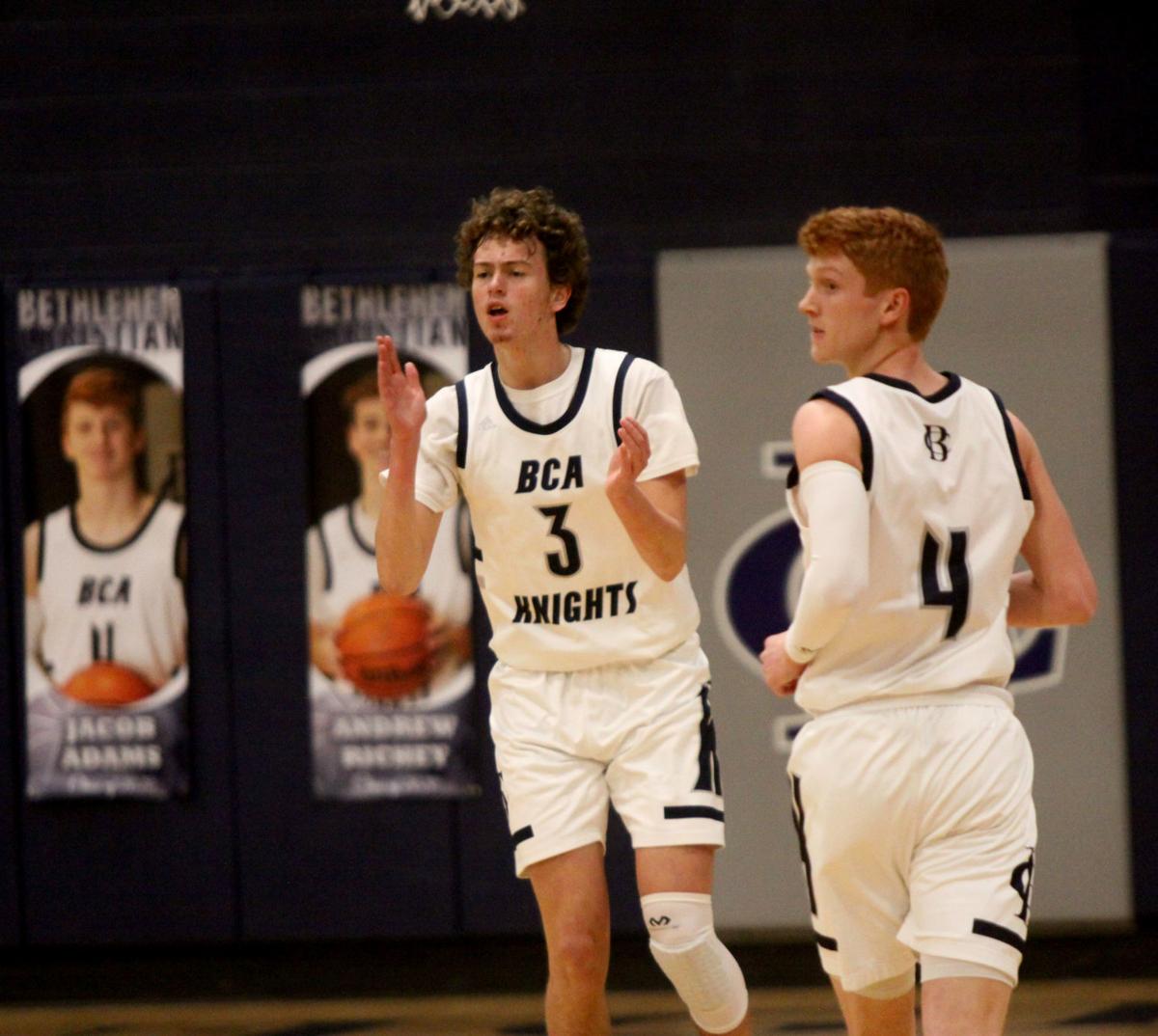 Ray Peevy claps after hitting a 3-pointer in the first quarter against Westminster. 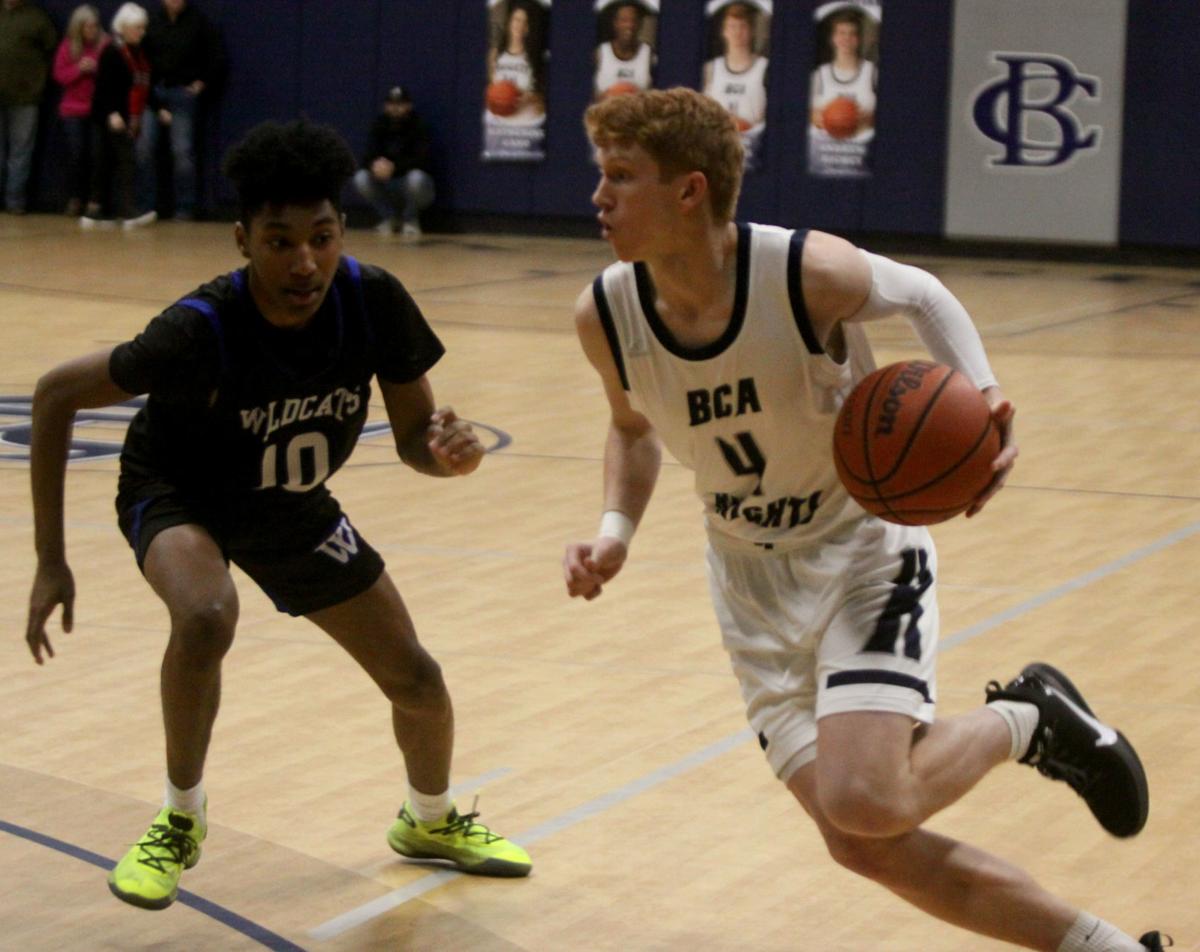 BCA's Jacob Adams dribbles toward the basket during the first half against Westminster. 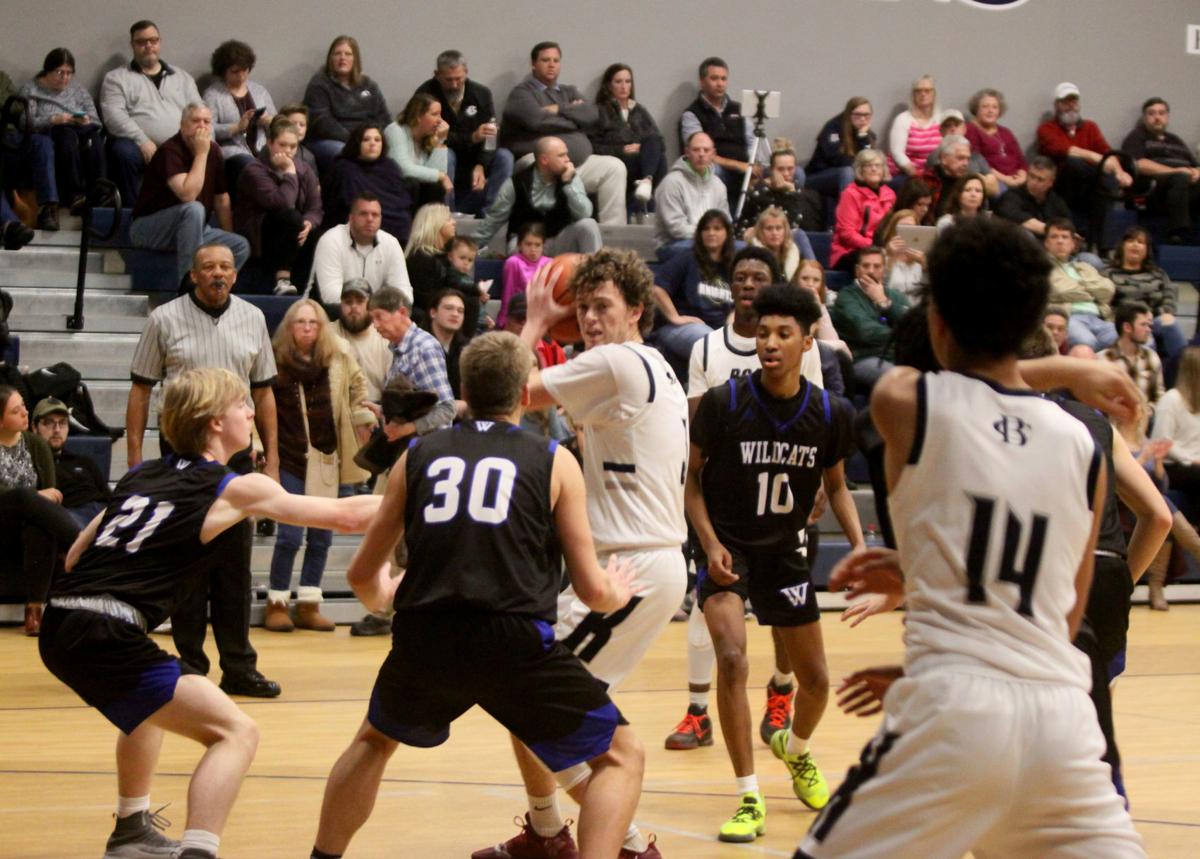 BCA's Ray Peevy looks for help during the first half against Westminster. 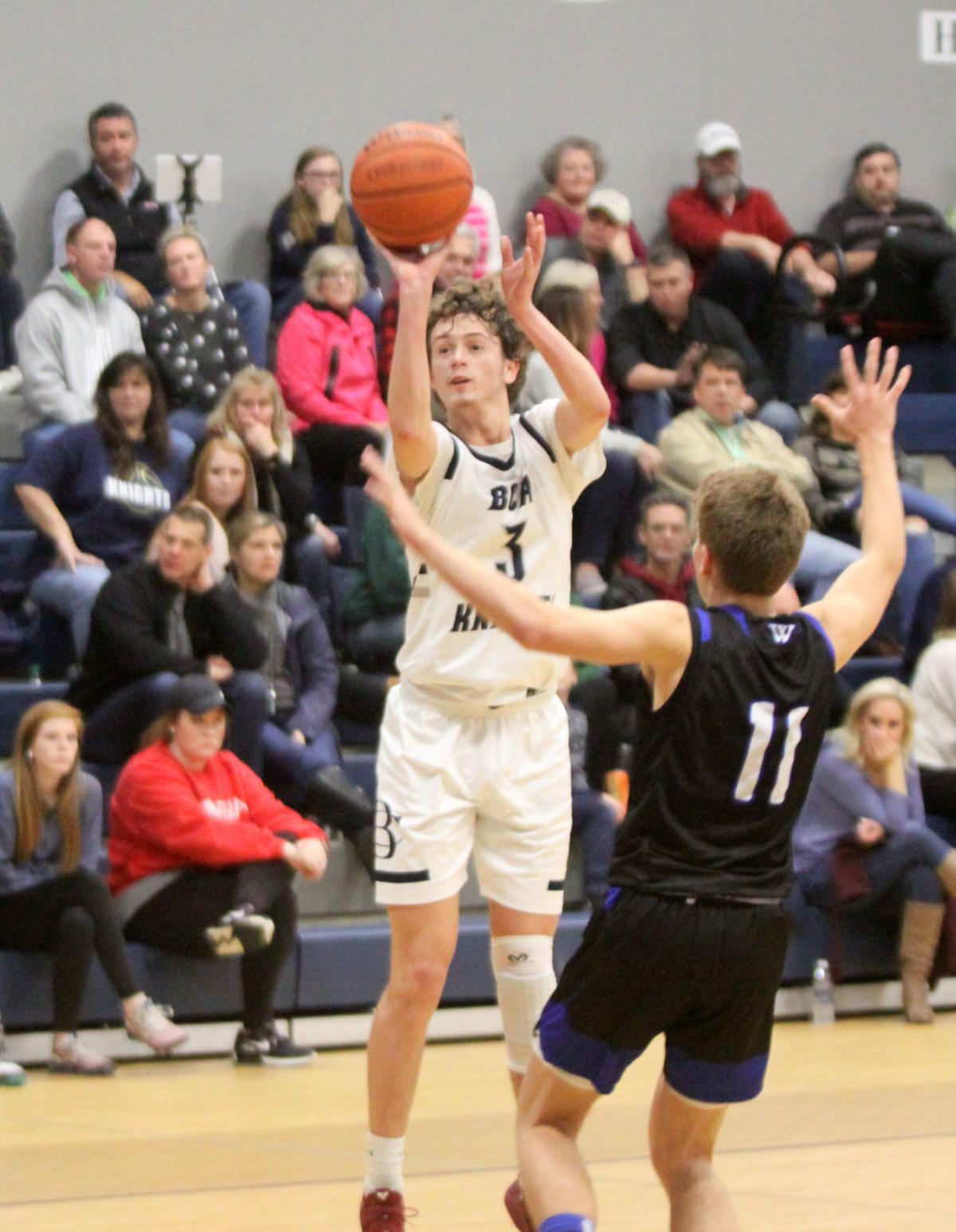 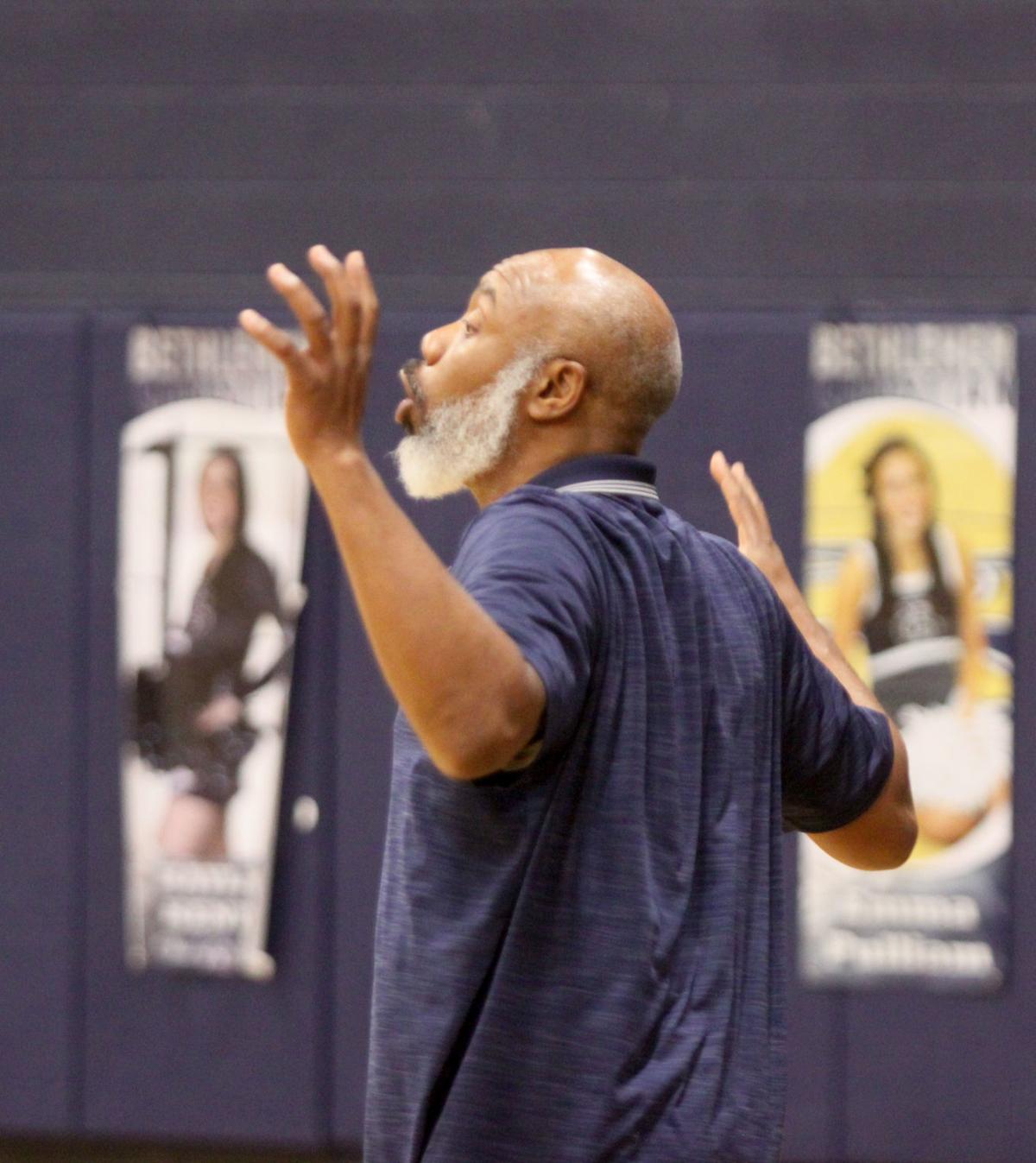 William Steele is in his first season as the Knights' head coach. 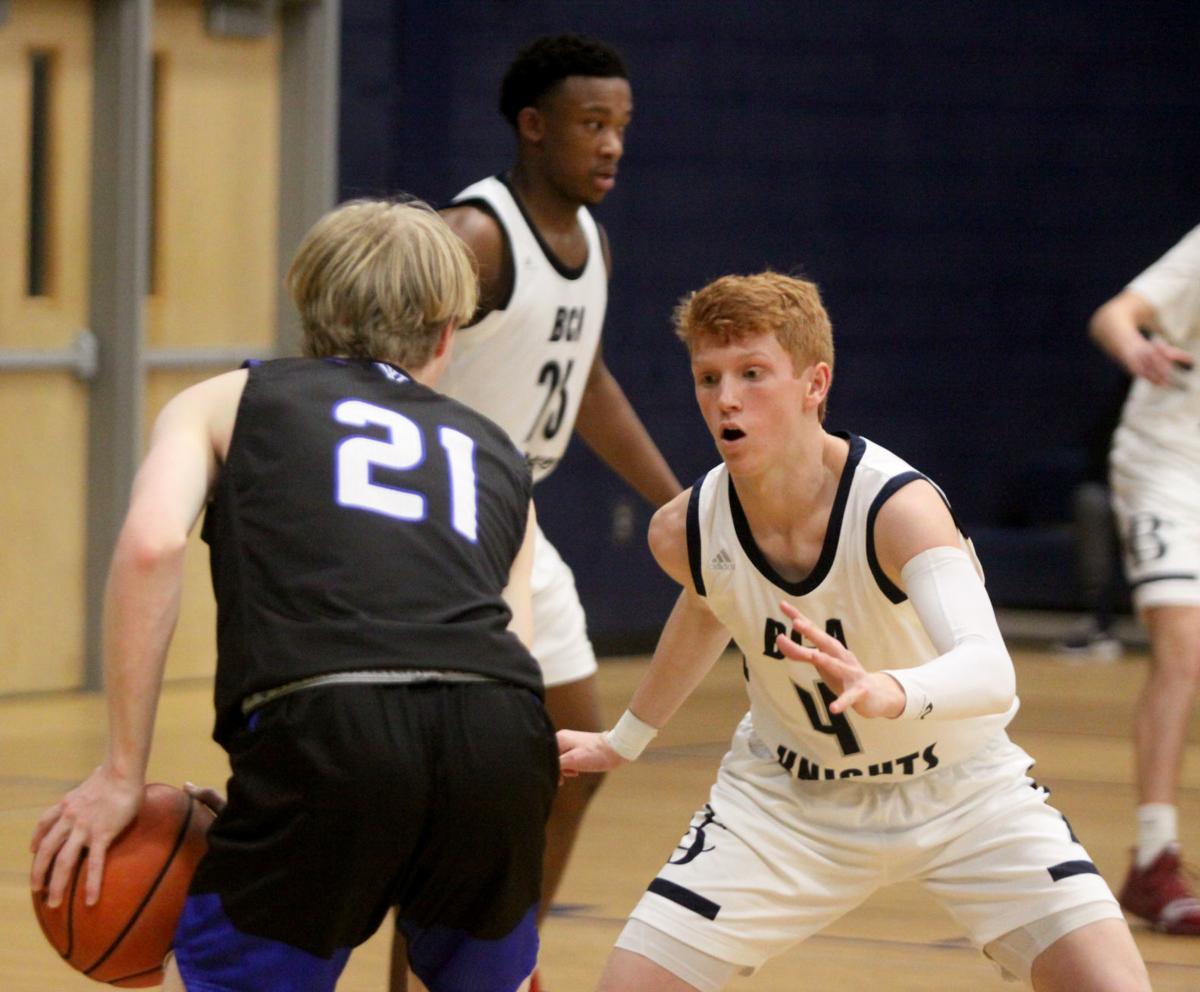 BCA senior Jacob Adams plays defense during the second half against Westminster. 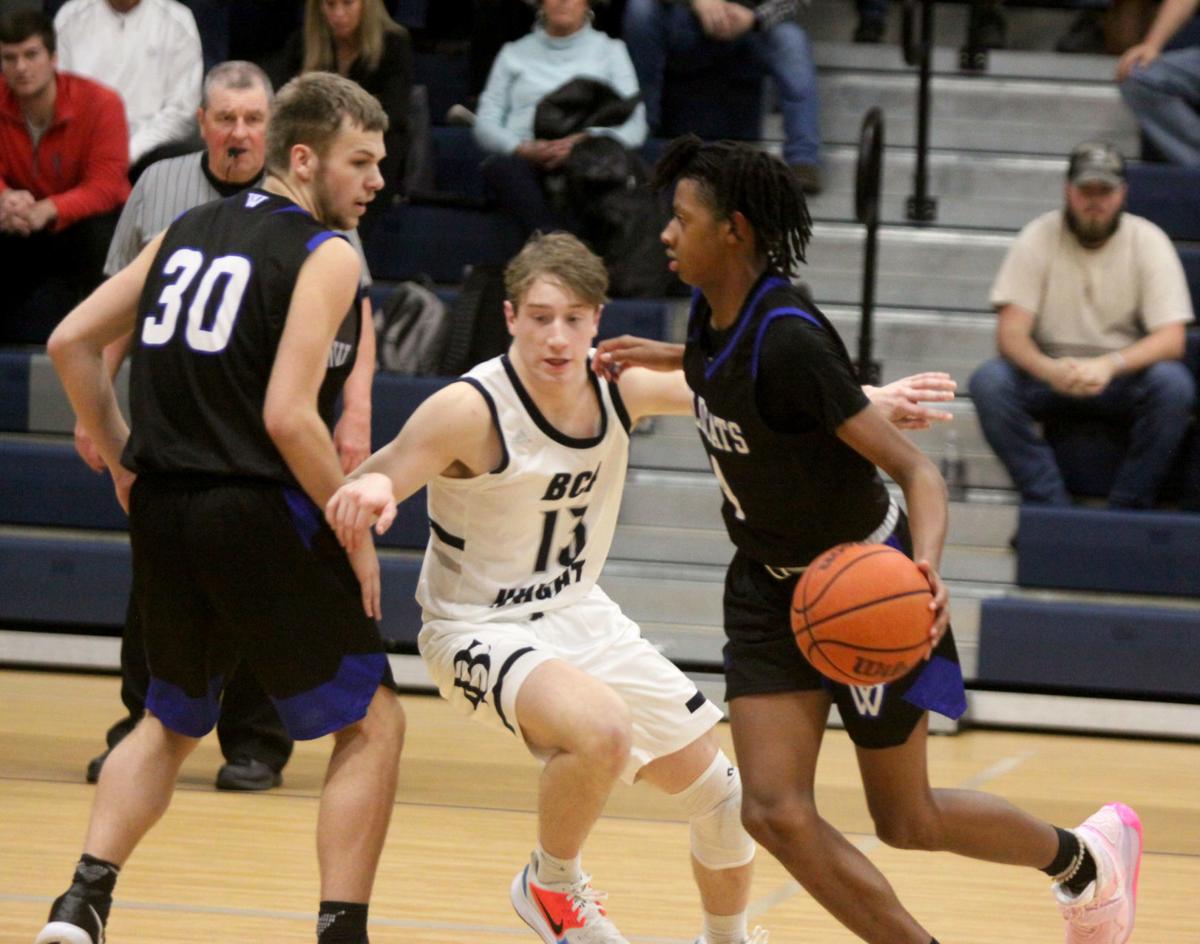 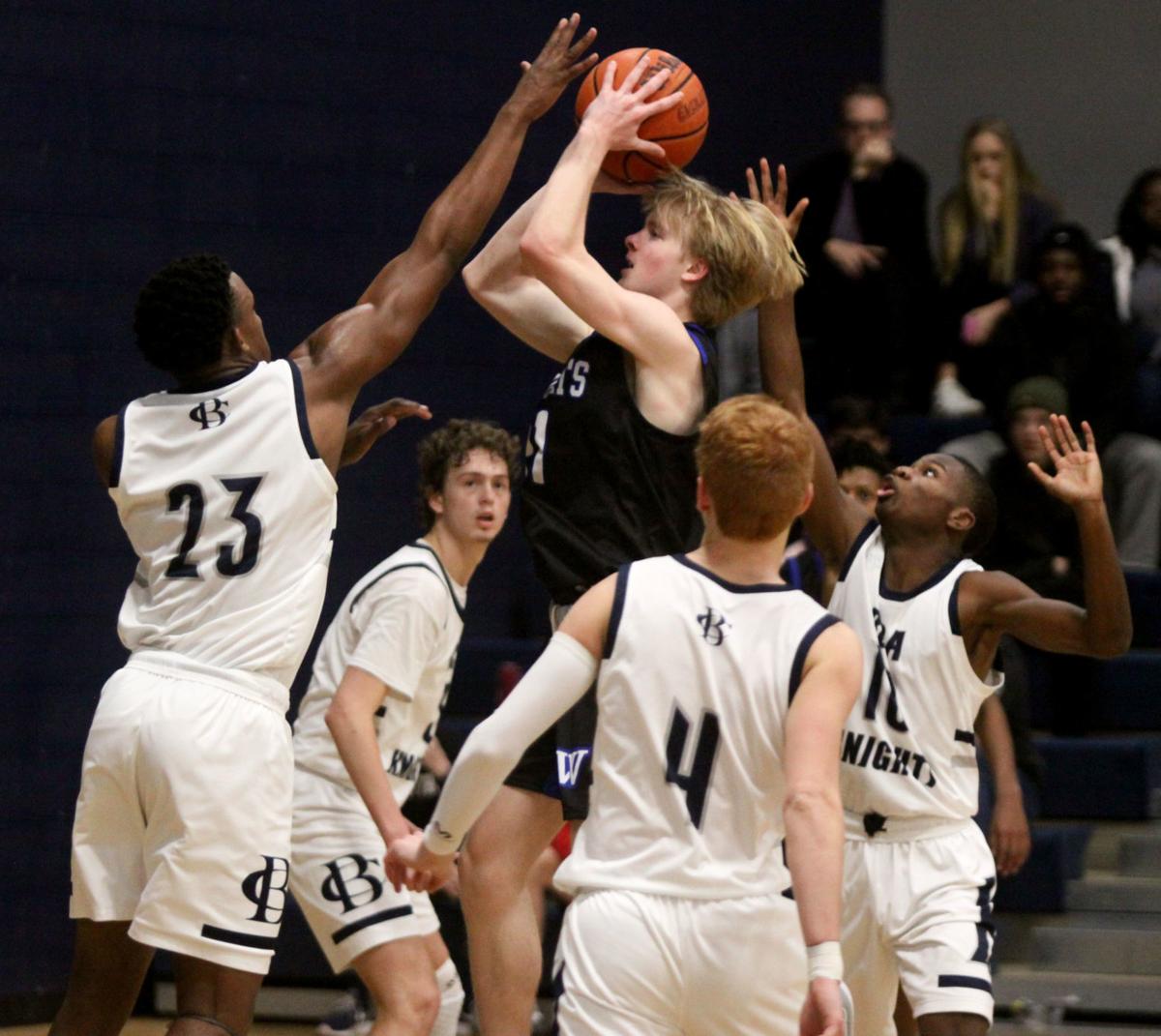 BCA's Laine Jean Francois (23) reaches out to try to block a shot against Westminster. 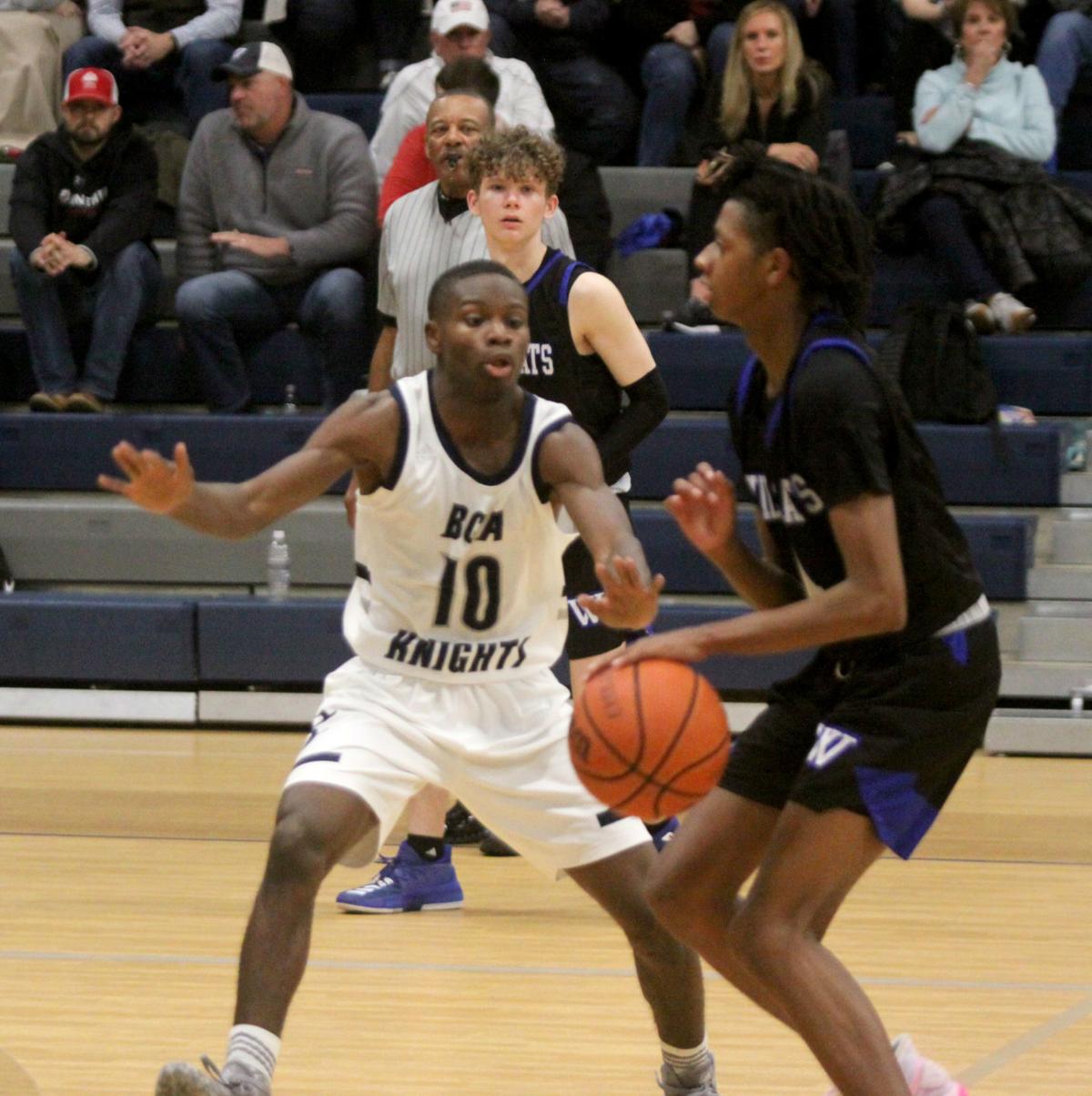 Ray Peevy claps after hitting a 3-pointer in the first quarter against Westminster.

BCA's Jacob Adams dribbles toward the basket during the first half against Westminster.

BCA's Ray Peevy looks for help during the first half against Westminster.

William Steele is in his first season as the Knights' head coach.

BCA senior Jacob Adams plays defense during the second half against Westminster.

BCA's Laine Jean Francois (23) reaches out to try to block a shot against Westminster.

In what was likely the final home game of their high school careers, it seemed only appropriate that the Bethlehem Christian Academy boys’ basketball team’s seniors carried the Knights to a region victory over Westminster School of Augusta on Friday, Jan. 31.

The Knights (10-13, 3-4 GISA Region 4-AAA after their Tuesday, Feb. 4 loss at John Milledge Academy) overcame a sluggish second quarter that saw them lose an early lead at halftime and dominated defensively in the second half en route to a 49-40 win over the Wildcats (13-8, 3-4) on Senior Night at the school.

Five of BCA’s seven seniors combined to score all but two of the Knights’ 49 points on the night. Ray Peevy led the way with 19 points, while Eliel Saint Louis also finished in double figures with 11 points.

“The first half, we played a little bit sloppy and were shooting unnecessary shots,” said first-year BCA head coach William Steele, whose team led 15-8 after a quarter of play, but struggled from the floor in the second quarter and fell behind 22-21 at the break. “We got refocused in the third quarter and decided we were going to play as a unit again. We’ve talked about that light switch switching on and off, and we finally got it to switch on. They did a lot better job talking on defense, which I loved. (Westminster is) a good team. They beat us the first time by one when we had a lead and lost it. We did a good job bouncing back this time around.”

When Steele took over a team that reached the state Final Four last season and had to replace three starters, he knew getting buy-in from this year’s seniors would be crucial to the team’s chances of a successful year, and he said that buy-in has come as the season has progressed, adding that has had a positive impact on the underclassmen on the roster.

Peevy, a four-year starter at guard for the Knights, has been the sparkplug. A threat from 3-point range since his freshman season, Peevy hit the game-winning three in the closing seconds of last year’s state quarterfinals to send the Knights to the semifinals. And on Friday, he knocked down a trio of shots from downtown in the first quarter. He then took over physically in the final period, drawing four fouls and going 8-for-8 from the free throw line to help put the game on ice.

“I met Ray when he was in the eighth grade and have known what he can do,” Steele said. “He’s like the backbone of the team. Once he starts talking and being active, that’s when I really love it. When he gets going, other people get going.”

One of those others Friday was Saint Louis, whose seven third-quarter points fueled an 11-3 run and put the Knights ahead 34-27, a lead they wouldn’t relinquish.

Saint Louis, a sparsely-used guard on varsity prior to this winter, has become a steady presence in the Knights’ lineup and improved his all-around game, Steele said.

“We’ve been working a lot with him on his ball-handling, his mid-range shooting, and he’s improving every day,” Steele said of Saint Louis. “Sometimes he might get lost in the shuffle, but when he really sticks out, he’s the most athletic player on the court.”

Westminster cut BCA’s lead to 41-39 on a 3-pointer by Carter Huss with 3:19 remaining, but that was the last field goal the Wildcats would make. BCA responded with a successful free throw by Jacob Adams and two more by Peevy, and senior Matthew Binns’ steal and lay-in down an open lane with just over a minute left made it 46-39 and effectively salted the game away.

The Knights will close out their regular season Friday, Feb. 7, with a trip to rival Loganville Christian before next week’s region tournament at John Milledge. The Knights let an early double-digit lead slip away at home Jan. 21 in a nine-point loss to the Lions, who were seeking this week to lock up the top seed for the region tournament. Steele said games against the region’s top two teams this week should help them be prepared for next week’s tournament.

“We stand a good chance with both teams if we play well,” he said. “We know we can play with them.”