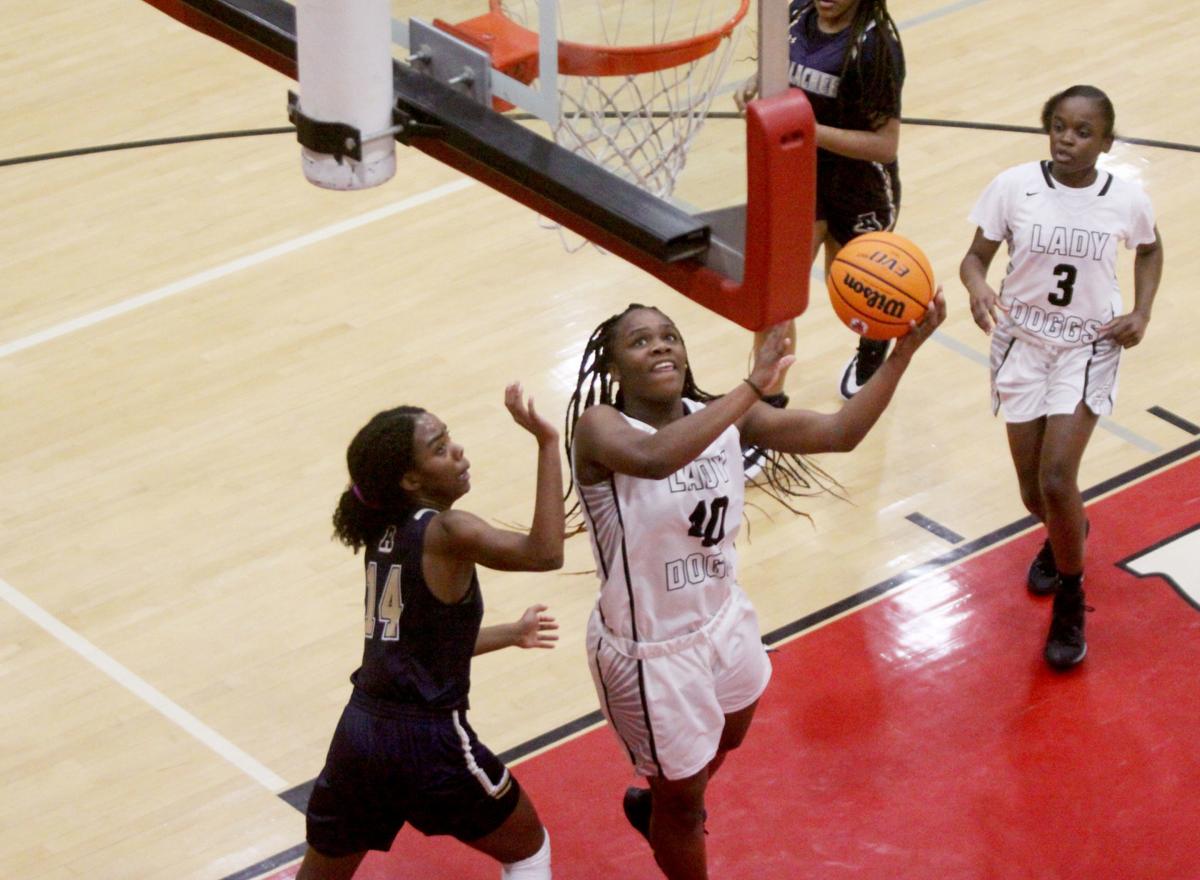 Winder-Barrow's Taniyah Parrish scored 22 points in a 64-37 win over Apalachee in the first round of the GHSA Region 8-AAAAAA tournament at Gainesville High School on Feb. 6. 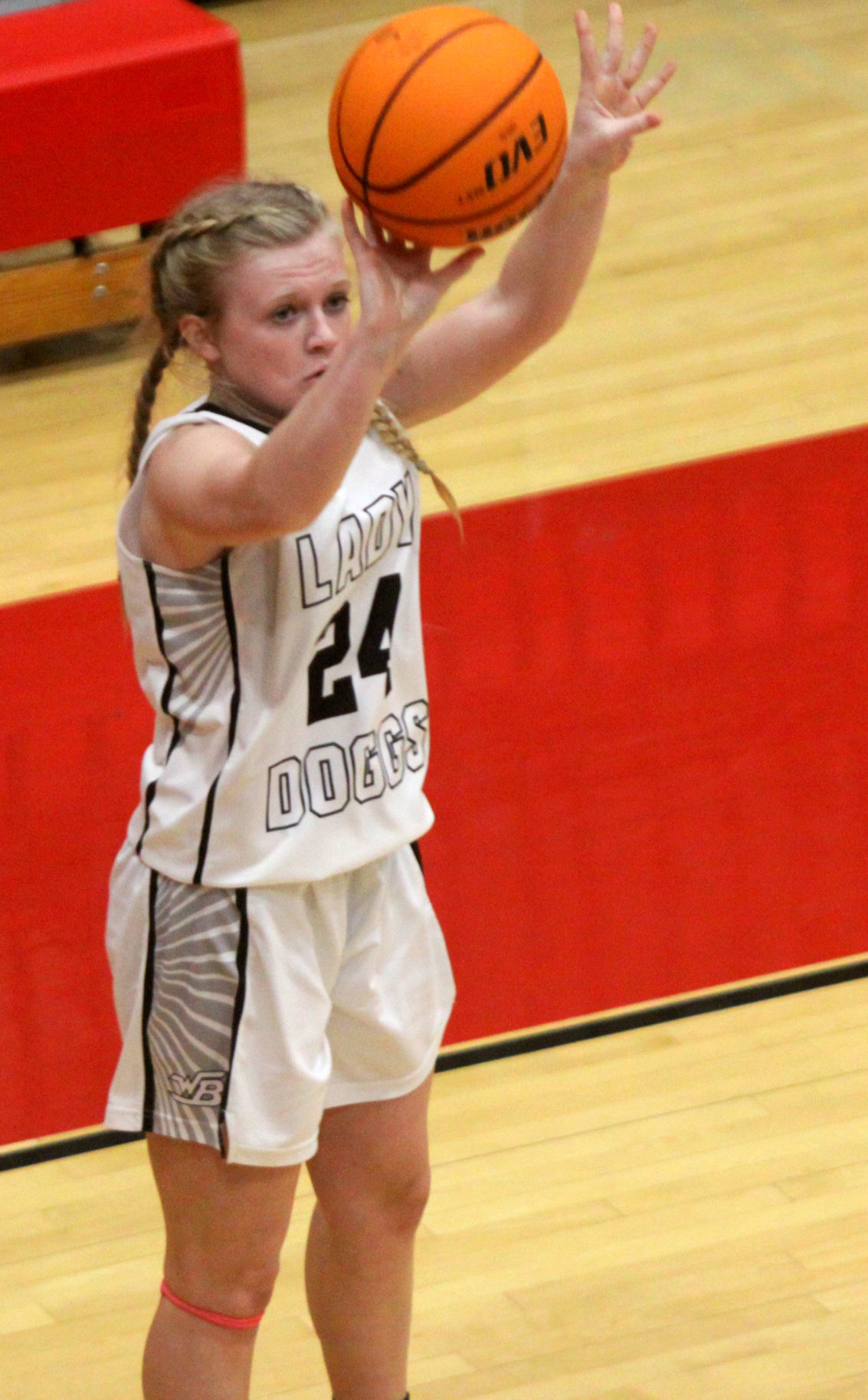 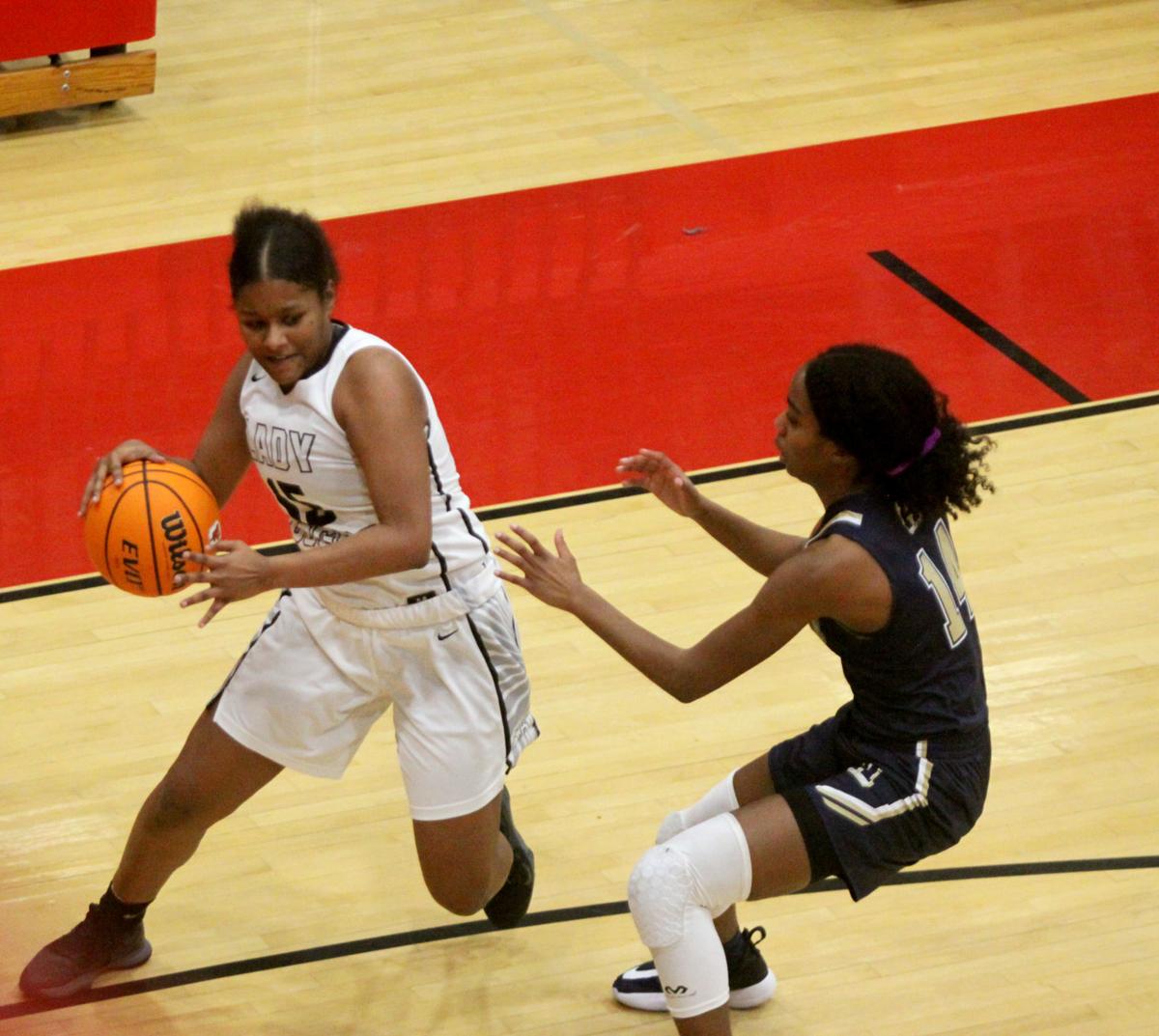 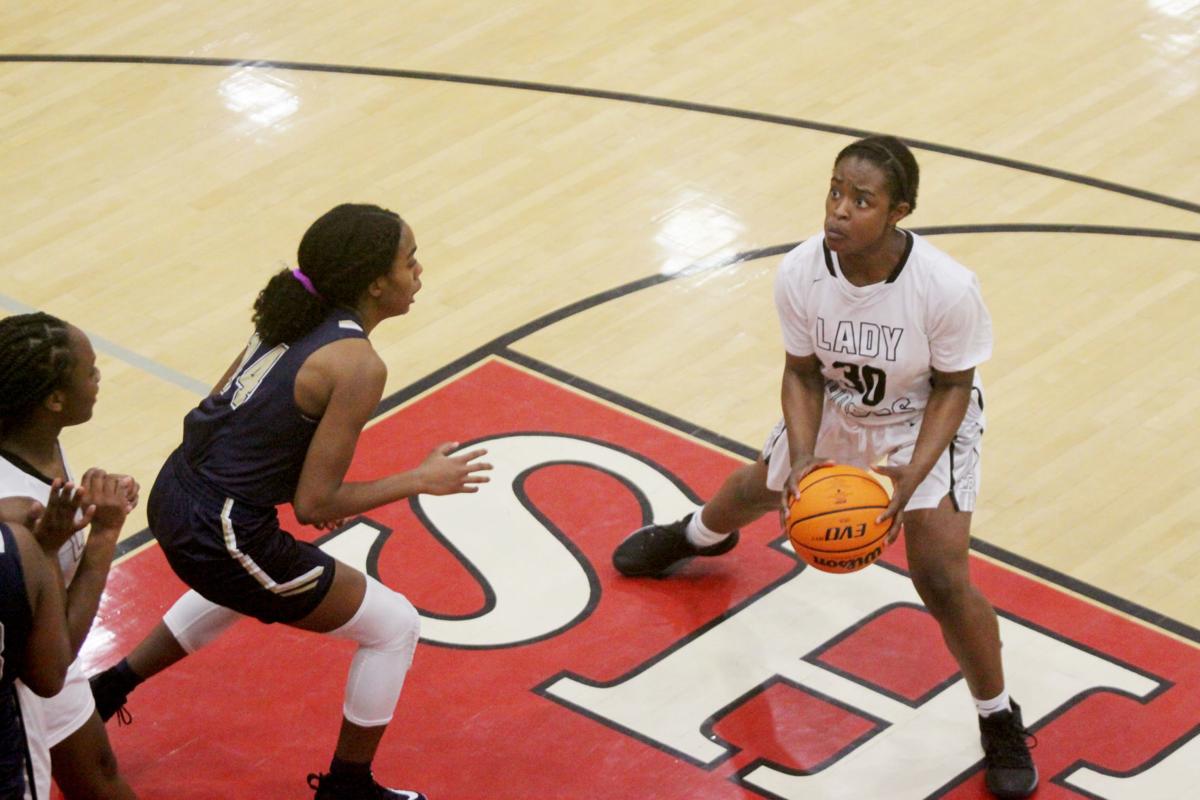 Winder-Barrow's Kiona Lindsay looks for a shot attempt against Apalachee. 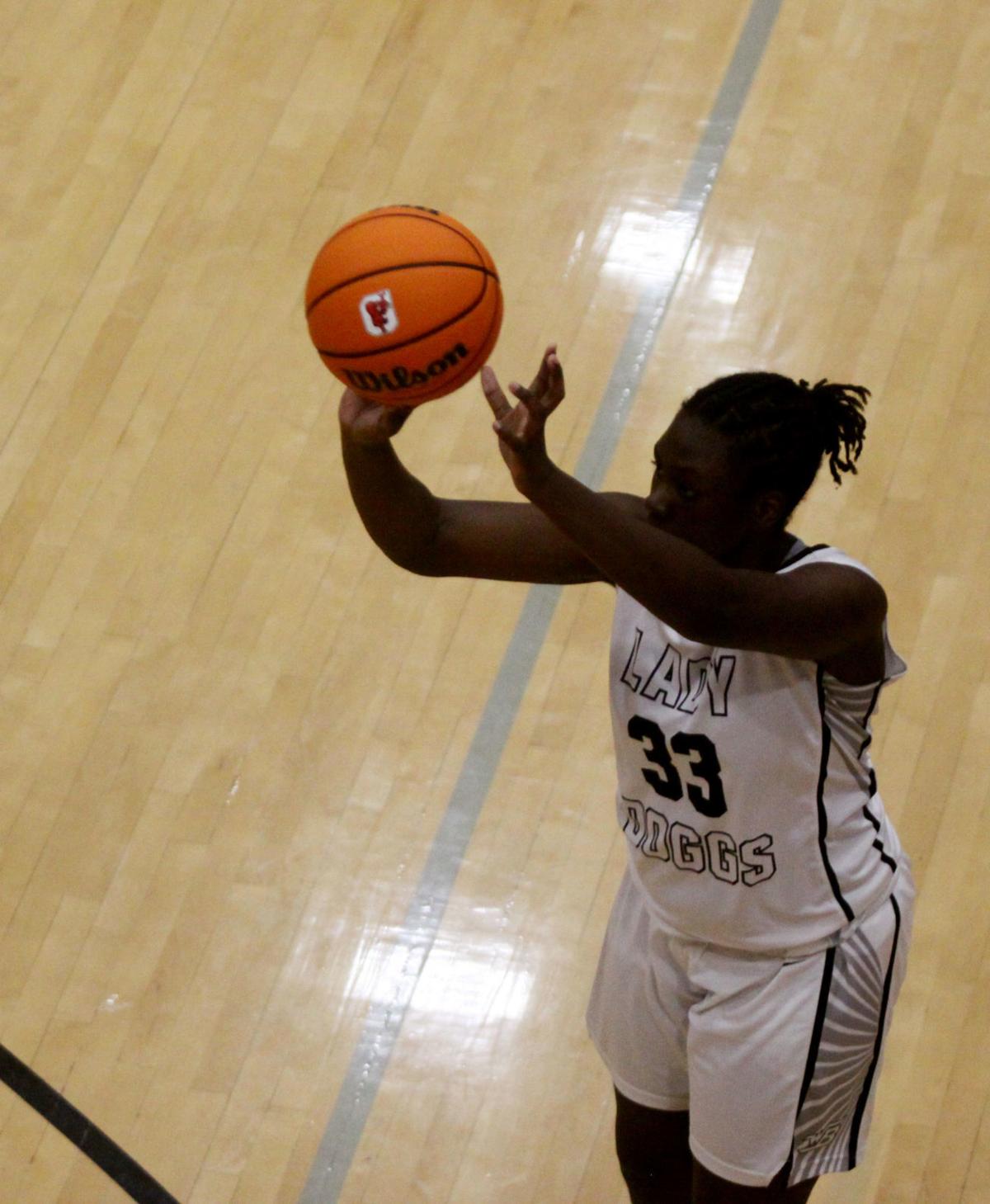 Winder-Barrow's Taniyah Parrish scored 22 points in a 64-37 win over Apalachee in the first round of the GHSA Region 8-AAAAAA tournament at Gainesville High School on Feb. 6.

Winder-Barrow's Kiona Lindsay looks for a shot attempt against Apalachee.

Winder-Barrow girls’ basketball coach Kimberly Garren knows it will take a team effort for the Lady Bulldoggs to make a postseason run, and that’s what she got Monday, Feb. 10.

Three players finished in double figures and the Lady Bulldoggs got some critical help off the bench as they squeezed out a 57-55 win over Habersham Central in the third-place consolation game of the GHSA Region 8-AAAAAA tournament at Gainesville High School.

Winder-Barrow (17-11), which won for the second time in three tries this season against the Lady Raiders (13-14), trailed by six points at halftime but outscored Habersham by 11 in the third quarter and then held on at the end for the victory. Sophomore forward Taniyah Parrish led the way with 19 points, while Keonna Hamler finished with 11 points, including three key 3-pointers, and Daisia Stillwell added 10. Freshman Trinity Maxey played a pivotal role off the bench, scoring 7 points and hitting a 3-pointer to give the Lady Bulldoggs the lead in the fourth quarter.

Winder-Barrow will now travel to Kennesaw on Friday, Feb. 14, to face Region 6 No. 2 seed Harrison (22-5) in the first round of the state playoffs. The Lady Hoyas were upset by Sprayberry on Monday in that region tournament championship game.

After a 64-37 blowout of Apalachee in the first round of the region tournament on Feb. 6 that locked up a state playoff berth, the Lady Bulldoggs hoped to clinch a spot in the championship game but fell for a third time this year to Dacula, 51-42, on Friday, Feb. 7, in the semifinals.

“We would have liked to (make it to the championship), but I thought we played well in the tournament,” Garren said. “The goal for us (against Habersham) was to get a win under our belt and not go into the state tournament with two losses in a row. The win was big for morale.”

Garren said the Lady Bulldoggs are eager for the challenge of facing what she calls a “very fundamentally sound team” in Harrison.

“Defensively, they’re going to play man to man and they’ll jump and pressure you,” Garren said. “Offensively, they’ve got good shooters, drivers and kids that can bang around in the post. They’ve got all the different types of pieces for a really good basketball team, and we’ve got to be able to handle the ball and handle their pressure.

“But it’s going to be fun. I’ve told the girls if you want to win a championship, you’ve got to be able to beat the best. We’re going to try our best to work hard and be prepared, and at the end of the day you’ve just got to go out there and play.”

Garren said the Lady Bulldoggs will try to be flexible with their tempo and she is confident in her team’s ability to execute the game plan.

Harrison will likely put a heavy emphasis on slowing Parrish, Winder-Barrow’s leading scorer, which will make it all the more crucial for other players to score, Garren said.

“They’re probably going to try to take Taniyah away but we can’t let that get us out of our game plan,” she said. “She’s been doubled multiple times this year and we’re still going to try to get the ball to her. And it’ll be up to the others when their time comes to get open and be ready to knock the shot down.”

Tipoff on Friday is set for 7 p.m.