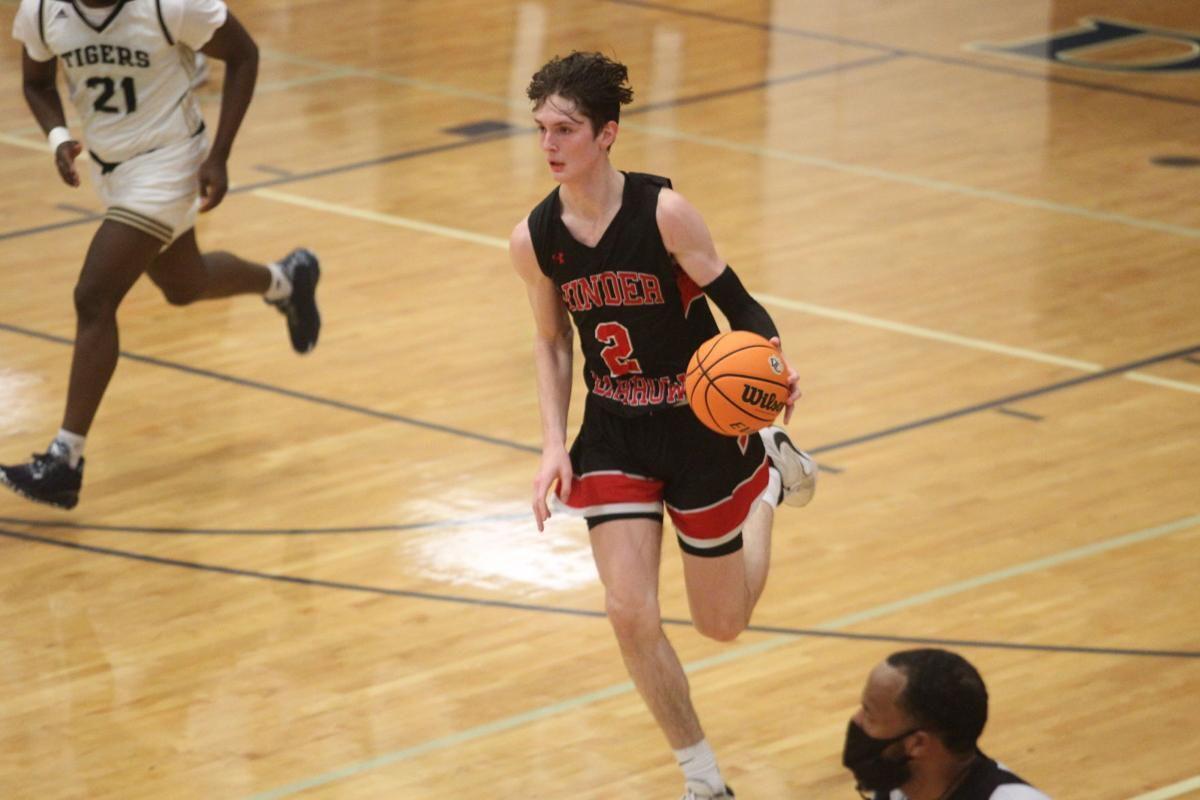 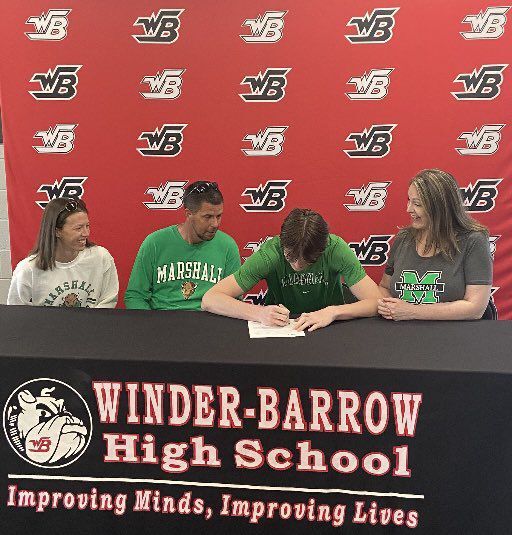 Fricks signed with Marshall during a ceremony at the school April 15.

Fricks signed with Marshall during a ceremony at the school April 15.

Hampered by injuries that sidelined him for most of the early part of his high school career, Wyatt Fricks wasn’t sure whether he wanted to continue playing basketball and pursuing a chance to compete at the collegiate level. But in the end, his passion for the game won out over that uncertainty, and Fricks has now been given an opportunity to play on the NCAA Division I stage.

After drawing coaches’ attention with a strong junior season at Mountain View High School in Lawrenceville and an even better all-around senior campaign at Winder-Barrow this past winter, Fricks committed to Marshall University over a handful of other suitors and made his signing with the Thundering Herd official April 15.

“I’m just blessed to be in this position,” said Fricks, a 6-foot-9 power forward, who averaged 19.3 points, 9.5 rebounds, 3.1 assists and 2.5 blocks in 27 games with the Bulldoggs this season. “Two years ago, I didn’t think I’d be in this spot, but I put a lot of hard work in to get here and I’m happy it paid off. I loved talking to (Marshall’s) coaching staff and the feedback they gave me. And I really like their style of play with the 5-out offense and they quick-shoot a lot. I think it suits me well. And, as long as you give effort, Coach (Dan) D’Antoni is going to be a great coach to play for.”

“He can handle the ball and run the floor,” D’Antoni said of Fricks in a news release from Marshall. “He's very competitive. He's athletic and can catch the ball above the rim. He can play anywhere and shoots threes well."

With his size and all-around talent — including long-range shooting ability, rebounding and defense — the potential has been there for Fricks to play Division I basketball. But his health wasn’t always there. Back-to-back dislocated knee cap injuries his freshman and sophomore seasons severely limited his playing time and took him off the floor completely the second time around.

“There was a whole year where I was just sitting around and didn’t get to do much, and I was having talks with my parents and girlfriend and questioning whether I wanted to keep playing basketball and putting my body through this,” Fricks said. “But I decided to keep pushing. I rehabbed and worked hard, and it’s worked out. And I’m happy for my family that I was given a full scholarship and they don’t have to worry about paying anything.”

Fricks’ journey to Winder-Barrow was a matter of circumstances brought on by the coronavirus pandemic. He had just finished up a strong year with Mountain View that saw him selected to his all-region team when the pandemic disrupted life around the world. Last summer, with the prospect that Gwinnett County’s public schools would begin the new academic year entirely online, Fricks wanted an opportunity to go somewhere where he could stay in the classroom.

He decided to make the move to WBHS, and while the Barrow County School System ultimately started the year 100-percent virtual amid high local case numbers following a summer spike, the district had most of its students, including Fricks, back in the classroom full-time by mid-September.

While Fricks, who had been the primary standout at Mountain View, saw a bit of a role change at Winder-Barrow with another pair of Division I prospects in the fold (senior forward Isaiah Nelson-Ododa and junior guard Tim Loud), he also was an X-factor for a program that was looking to take the next step. Fricks’ stellar play helped the Bulldoggs navigate a difficult GHSA Region 8-AAAAAA stretch en route to a 16-win season and their first state-playoff victory in 19 years with a first-round upset over Douglas County. Winder-Barrow eventually bowed out in the second round, but went toe-to-toe with a deep Centennial team that reached the Final Four.

“If one good thing came out of dealing with the virus, it was bringing me here to Winder,” Fricks said. “I love these guys and Coach (Travis McDaniel) and how he’s helped me. It was definitely a fun season, and I loved playing with all of my teammates.”

McDaniel described Fricks, who again was selected as an all-region player and garnered an honorable-mention nod on The Atlanta Journal-Constitution’s all-state team, as “a true blessing that fell in our lap in July.”

“We wouldn’t have gotten him if Gwinnett County had gone digital so it’s crazy how things happen, but having him come in was a tremendous addition and not only on the court,” McDaniel said. “He’s obviously extremely talented and plays hard, rebounds, blocks shots, makes shots from anywhere, but he’s been a tremendous blessing off the court. He’s been a big part of us having the right type of culture as a program. There’s never a bad day with him. He’s extremely consistent, his effort is never lacking, and he’s just the epitome of leadership by example. We don’t make the run that we did without him being a major part of it.”

With the perspective of having battled back from injuries, Fricks says he’s taking nothing for granted as he prepares to join a talented Marshall squad that is set to return several players, including at his position, who were previously considering their professional prospects before opting to come back.

“I’m looking forward to getting up there this summer and working hard and trying to get better,” he said. “I would love to go have a great career and have the chance to keep playing after college, but nothing is guaranteed. You’ve got to compete and earn the playing time.”

McDaniel is confident that Fricks will make the most of his opportunities to shine at Marshall.

“He’s such a special kid, and I cannot wait to see what the future holds for him,” McDaniel said. “He only got to really play two years in high school, and even in the few months we’ve had him I can see how far along he’s come along and how much better he’s gotten. I think he’s just scratching the surface of what he can do, especially as he grows into his body and becomes stronger.

“He’s got the chance to have a tremendous career.”