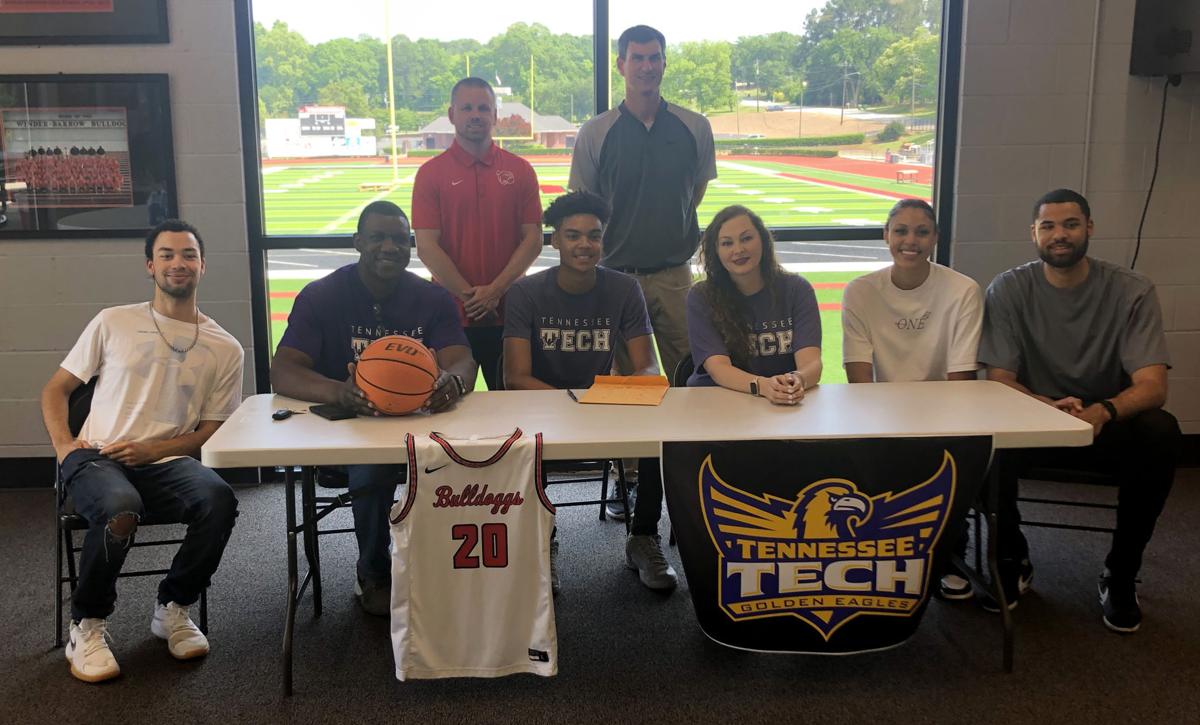 Winder-Barrow senior forward Isaiah Nelson-Ododa signed with Tennessee Tech University on May 25. He is pictured with his family and, on the back row, Winder-Barrow head coach Travis McDaniel (left) and athletic director Jared Noblet. 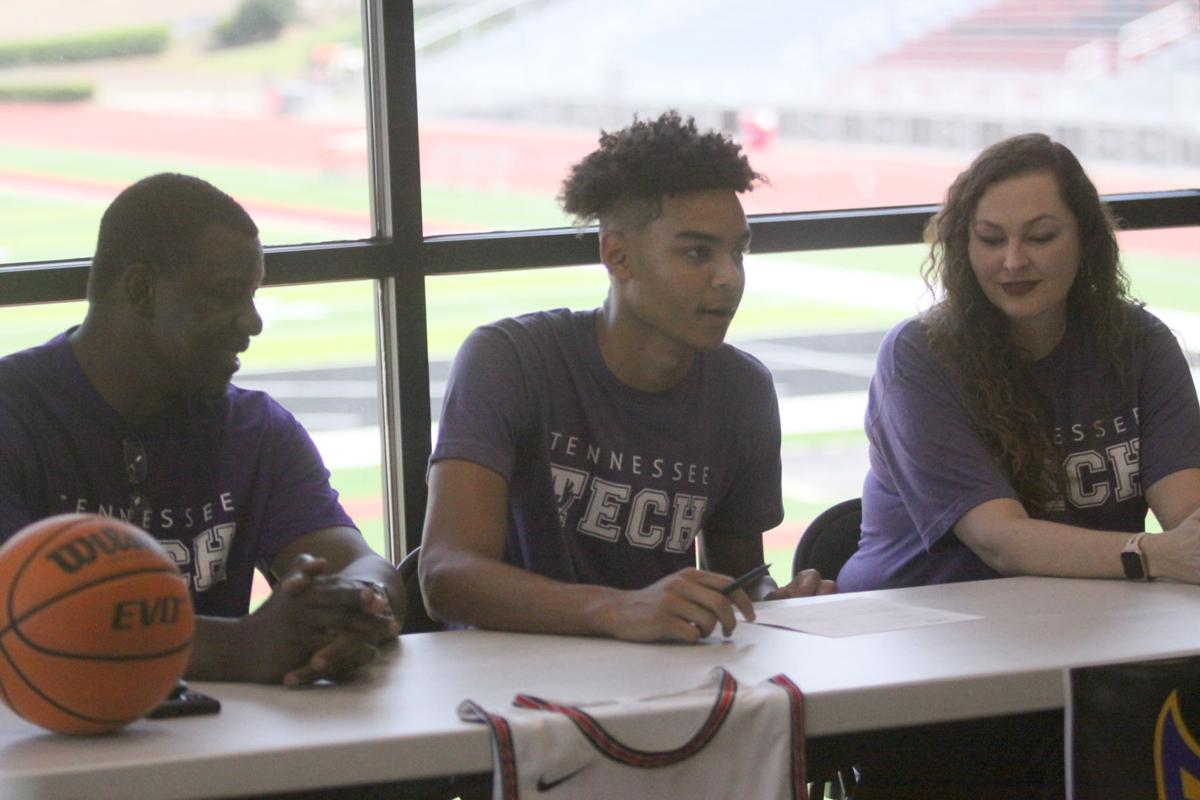 Nelson-Ododa signs with parents, Sebastian and Heather Nelson-Ododa, looking on.

Winder-Barrow senior forward Isaiah Nelson-Ododa signed with Tennessee Tech University on May 25. He is pictured with his family and, on the back row, Winder-Barrow head coach Travis McDaniel (left) and athletic director Jared Noblet.

Nelson-Ododa signs with parents, Sebastian and Heather Nelson-Ododa, looking on.

The journey to signing a Division I scholarship had been at least three years in the making for Isaiah Nelson-Ododa — and actually longer, considering that he comes from a family with strong basketball genes.

But the Winder-Barrow graduating senior got the chance to celebrate Tuesday, May 25, as he officially signed on to play at the next level with Tennessee Tech University — a week after he announced his commitment to the Golden Eagles, a member of the Ohio Valley Conference, over several other suitors.

“It feels great to get that ink on the paper and get it done with,” Nelson-Ododa, a 6-foot-10 power forward, said during a signing ceremony, where he was joined by family members, coaches, Bulldogg teammates and a small group of friends.

Nelson-Ododa’s signing to play collegiate basketball has seemed inevitable to many given his family background. His older sister, former Lady Bulldoggs standout Olivia Nelson-Ododa, who he has described as a key mentor for him, was a top-five national recruit and McDonald’s All-American and chose Connecticut over four other programs during a schoolwide assembly in November 2017. Olivia, who is now preparing for her senior season at UCONN, has played a pivotal role in keeping the Huskies’ long streak of NCAA Final Four appearances rolling.

On top of that, Isaiah’s older brother, Alonzo, who played his high school basketball at Norcross, went on to play college ball at Richmond and Pittsburgh and has played professionally in the NBA’s G League and most recently for a team in Portugal. And the siblings’ father, Sebastian, also played college basketball and was a member of Kenya’s national team.

“I fit right in. I’m part of the club now,” said Nelson-Ododa, whose recruitment process was impacted heavily over the last year by the coronavirus pandemic as the NCAA placed restrictions on coaching visits and granted all student-athletes an additional year of eligibility. Those factors, along with the emergence of the “transfer portal,” have changed the ways college coaches evaluate their rosters and scholarship situations and likely had an effect on Nelson-Ododa, who received Power Five interest from the likes of Georgia Tech and Iowa State that eventually cooled down.

None of those circumstances have deterred Nelson-Ododa, who has steadily developed into a better all-around player throughout his high school career and is eager to get to Tennessee Tech, where he’ll have the opportunity to major in mechanical engineering (a key factor in his decision) and to play significant minutes on the floor right away.

“Talking to their head coach and assistant, they’re so hungry about playing, and that’s the same way I am,” he said. “I just want to get on the court, and they want to make sure I’m the best I can be. Between (Winder-Barrow head coach Travis McDaniel) and his staff, they’ve helped me go beyond what a lot of high school programs could do. And I think that’s prepared me to be able to go in there and keep building on that and be able to show I can play on the next level.”

McDaniel, who arrived at Winder-Barrow in 2019 prior to Nelson-Ododa’s junior season, credited his star post player with anchoring the last two successful seasons, which saw the Bulldoggs reach the state playoffs in back-to-back years and snap a nearly two-decade drought without a playoff win last winter when they upset Douglas County in the first round.

Nelson-Ododa averaged 13.6 points and 9.2 rebounds this past season despite teams keying heavily on him inside, which opened up more opportunities for 6-foot-9 senior teammate and transfer Wyatt Fricks (a fellow Division I recruit who signed with Marshall) and standout junior guard Tim Loud. But he also continued to hone his overall shooting ability by becoming a threat from beyond the 3-point line, and his defensive prowess was still on full display as he averaged 5.1 blocks per contest.

“I’m extremely excited for and proud of him,” McDaniel said of Nelson-Ododa. “Everybody sees him on game night and signing the paper here, but not everybody sees the sweat and the hours of work he puts in. He definitely has done that, and he deserves the accolades and accomplishments and the opportunity to go play Division I for sure.

“When I first got here, I was just wowed by the natural ability he had. Obviously, there were things we needed to develop. He’s just worked extremely hard and closed those gaps. And he still has work to do; he’ll tell you that. But I think he’s going to a program that’s going to give him a chance to compete for playing time early, but also to further develop into the all-around star player that I think he’s going to become.”