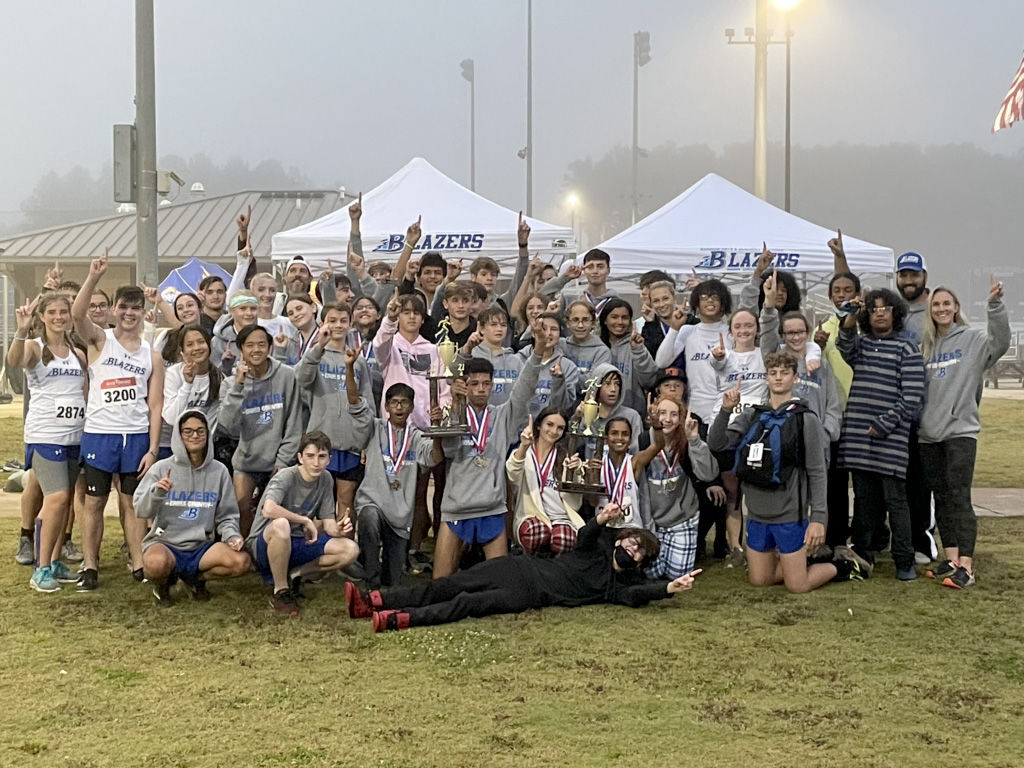 The Barrow Arts and Sciences Academy boys' and girls' varsity cross country teams both brought home the team titles in the GHSA Region 8-A Public championships at Social Circle High School on Oct. 28. 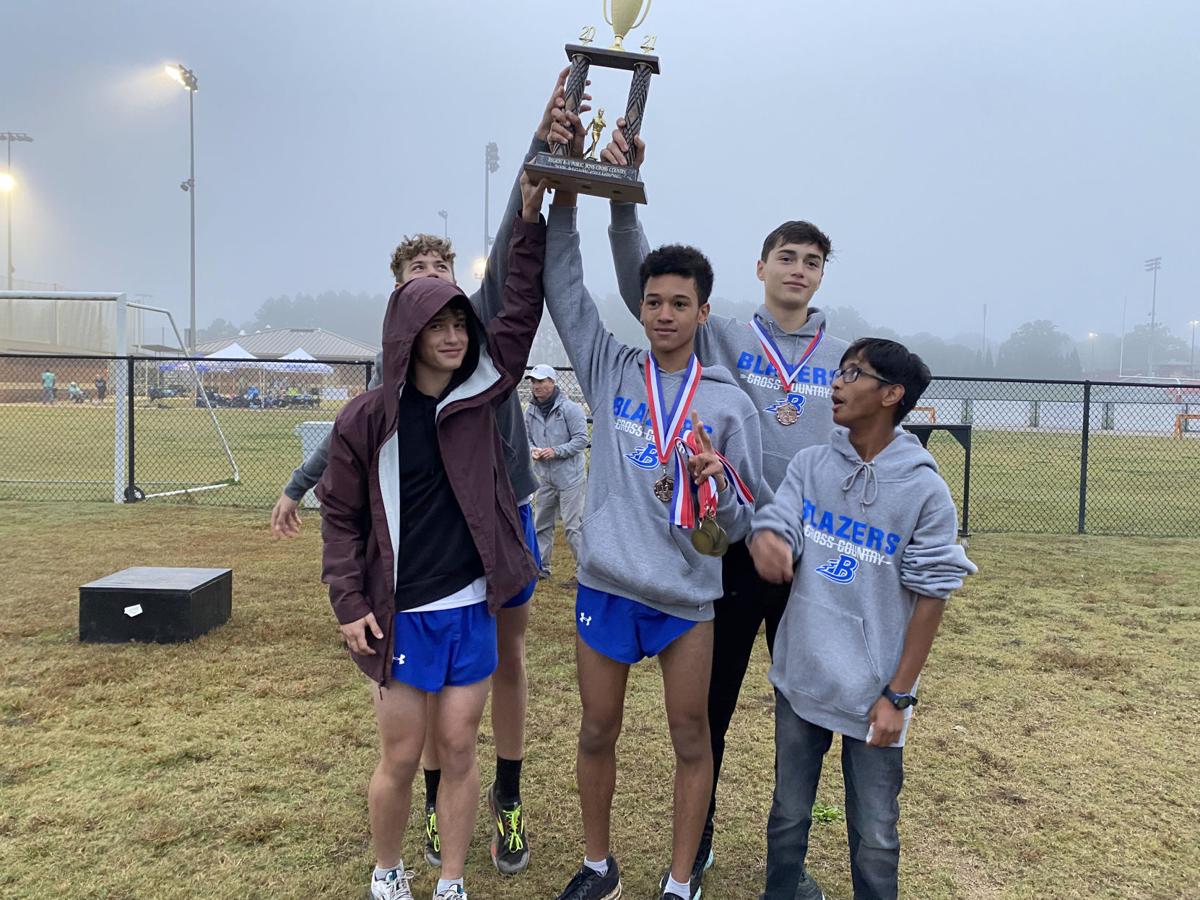 The BASA boys finished with 41 team points at the region meet, well ahead of runner-up Lake Oconee Academy (55). 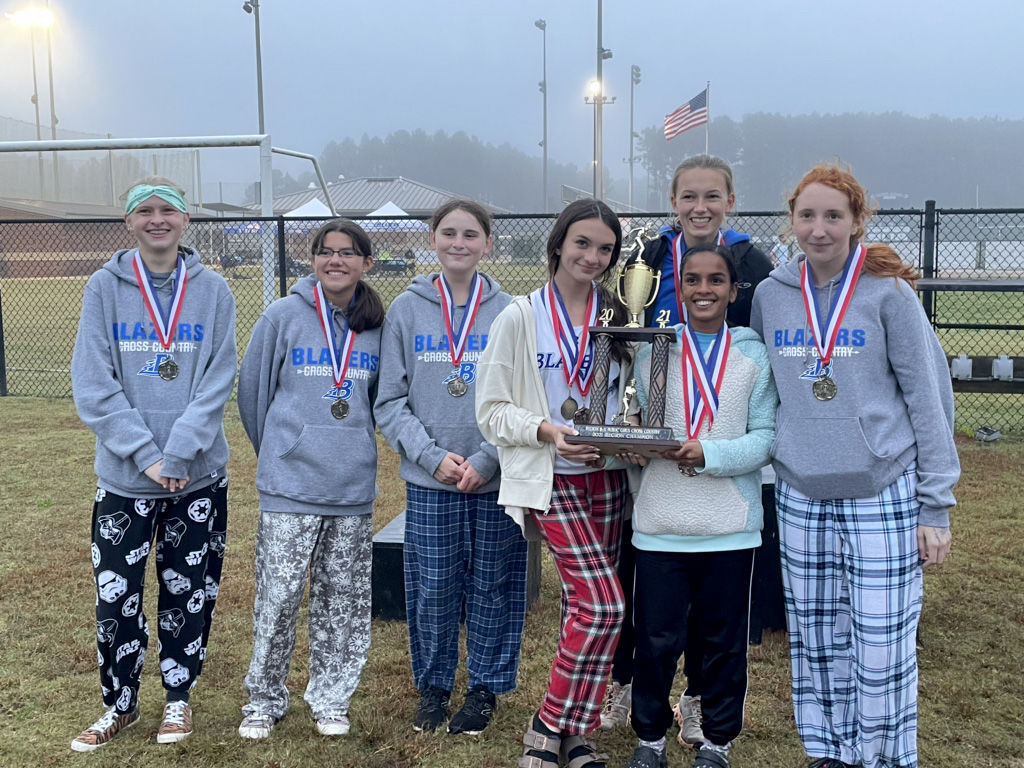 The Lady Blazers finished in first with 34 points, coming in ahead of runner-up Commerce (40).

The Barrow Arts and Sciences Academy boys' and girls' varsity cross country teams both brought home the team titles in the GHSA Region 8-A Public championships at Social Circle High School on Oct. 28.

The BASA boys finished with 41 team points at the region meet, well ahead of runner-up Lake Oconee Academy (55).

The Lady Blazers finished in first with 34 points, coming in ahead of runner-up Commerce (40).

Even with the challenges of jumping up to their first season of varsity-level competition, the makings were in place for the Barrow Arts and Sciences Academy (BASA) cross country teams to have a successful year this fall. And head coach Robert Simpson, his assistants and runners saw it all come together in the most triumphant of ways Thursday, Oct. 28.

The BASA boys and girls, each propelled by a trio of top-10 finishers, took home the team titles in the GHSA Region 8-A Public championships at Social Circle High School. When Simpson spoke to the Barrow News-Journal on Friday, Oct. 29, he was still understandably beaming and “over the moon,” as he and the rest of the programs turned its attention to the state meet at Carrollton High School set for Nov. 6.

“It really is the culmination of what’s been a really amazing season for us,” Simpson said of bringing home the region titles in the program’s and school’s second year of existence. Like all other BASA athletic programs, the cross country teams competed at the junior-varsity level last year and had 24 total runners, a number that blossomed this year to 55 throughout the program.

“It just speaks to the character of everybody involved with this program — from (BASA principal Dale Simpson) providing us the space and resources to create the team, to my assistants putting their heart into building the team, to all the time all of our runners have sacrificed to be the best they can be,” Simpson said.

“We were cautiously optimistic (about the boys winning a title) going in,” Simpson said. “(Assistant coach Corey Roper), throughout the year, had been watching our times and the times of the teams we knew we’d be running against. It’s been so much fun to watch all these kids dive into themselves and push themselves. We have a couple runners who are all in with their head, heart, body, mind and soul, and that rubs off on the others in a positive way. Michael Fletcher is among them. He’s usually the first to cross the finish line, but also the first to be there congratulate and cheering our other runners on.”

On the girls’ side, the Lady Blazers (34 points) finished just ahead of Commerce (40) — despite the Tigers having the top two individual runners — with sophomore Smita Carroll leading the team in fourth overall (22:18.07). Sophomore Emma Busbee (23:10.48) finished sixth, sophomore Devan Howard took eighth place (23:19.15), and Lillian Cash, Maya Tuz, Kaitlyn Harris and Lucy Bugg joined them in qualifying for the state meet as a team.

“The two teams are so dynamically different, but (Thursday) was really the break-through performance from the girls that we’ve been hoping for,” Simpson said. “A number of our runners shaved minutes off their times when we needed it the most. Devan Howard (set a personal record), Emma Busbee shaved time off. Yesterday was just a great day for all our runners.

“We were afraid going in the (wet and rainy) weather was going to be an issue, but I think it actually worked for us. It rained the whole day, but it had been dry the day before so the course wasn’t sloppy. And in the end, the gray, cool weather was as good as we could have possibly asked for.”

BASA now turns its attention to the Class A Public championships at Carrollton Nov. 6, with the boys’ team slated to compete at 2 p.m. and the Lady Blazers going off at 2:45 p.m.

For almost all of the team — including Simpson and with the exception of Roper, who has been a part of other programs that competed at state — it will be their first time in such a setting. But not one Simpson believes his runners will back down from.

“I just want the kids to go in knowing they have earned their place there, that the belong there, and go in with a good attitude and race the best very best they can,” he said. “I’m feeling incredibly honored to be part of a program that has (more than doubled) in one year and been able to go and win region championships. I absolutely see this season as a strong building block for the future.”