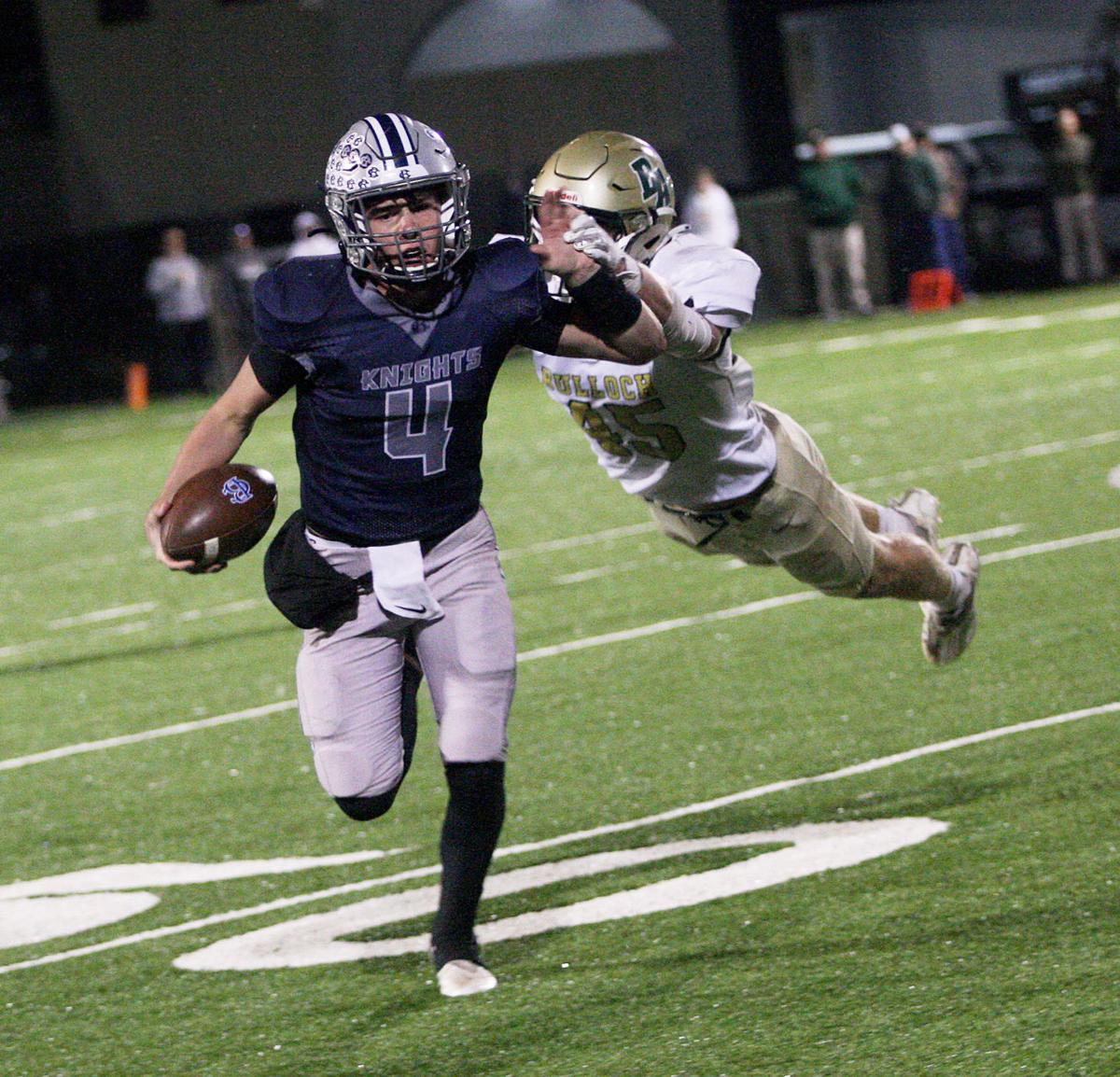 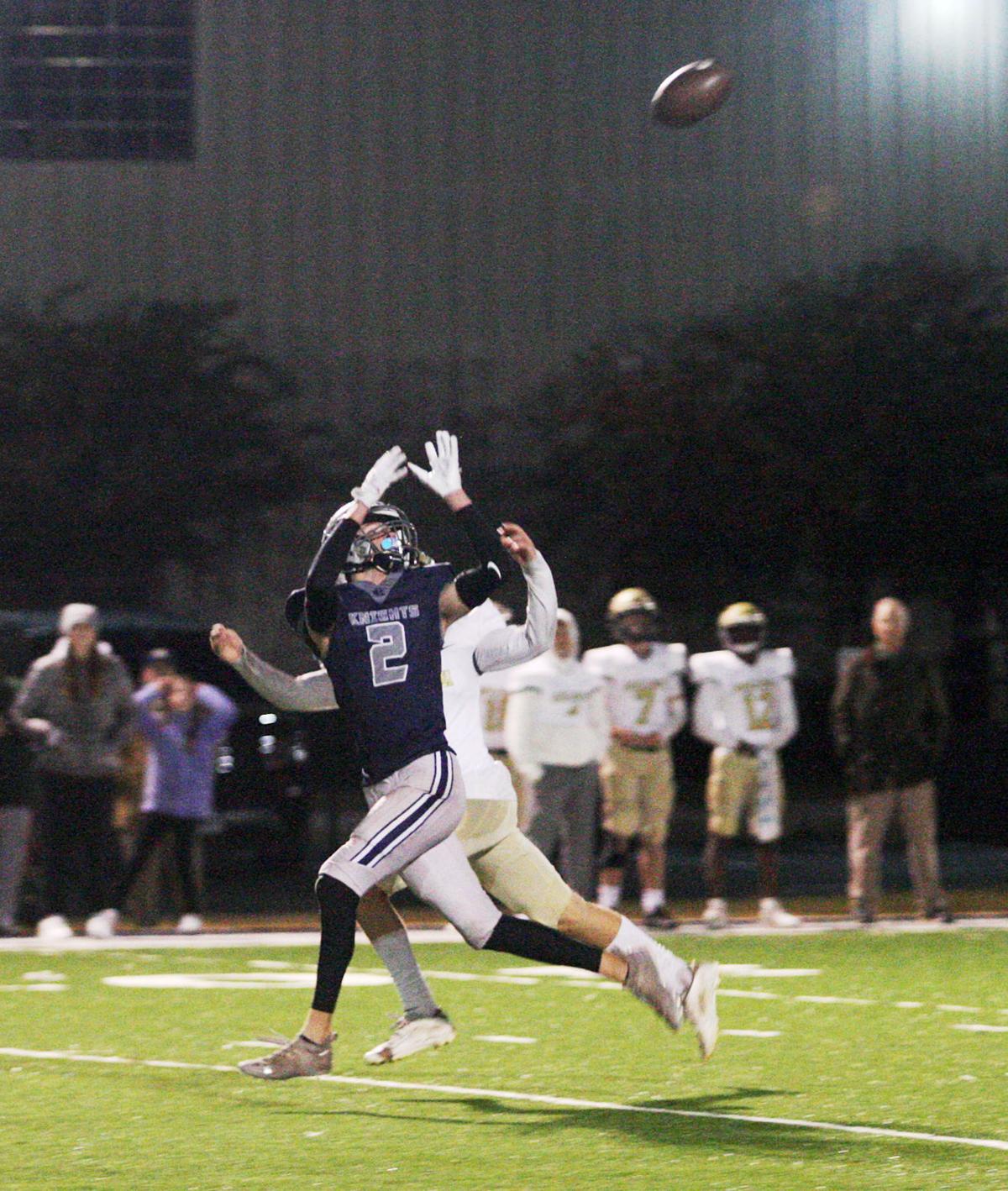 BCA receiver Ty Whiting tries to haul in a pass during Friday's game. 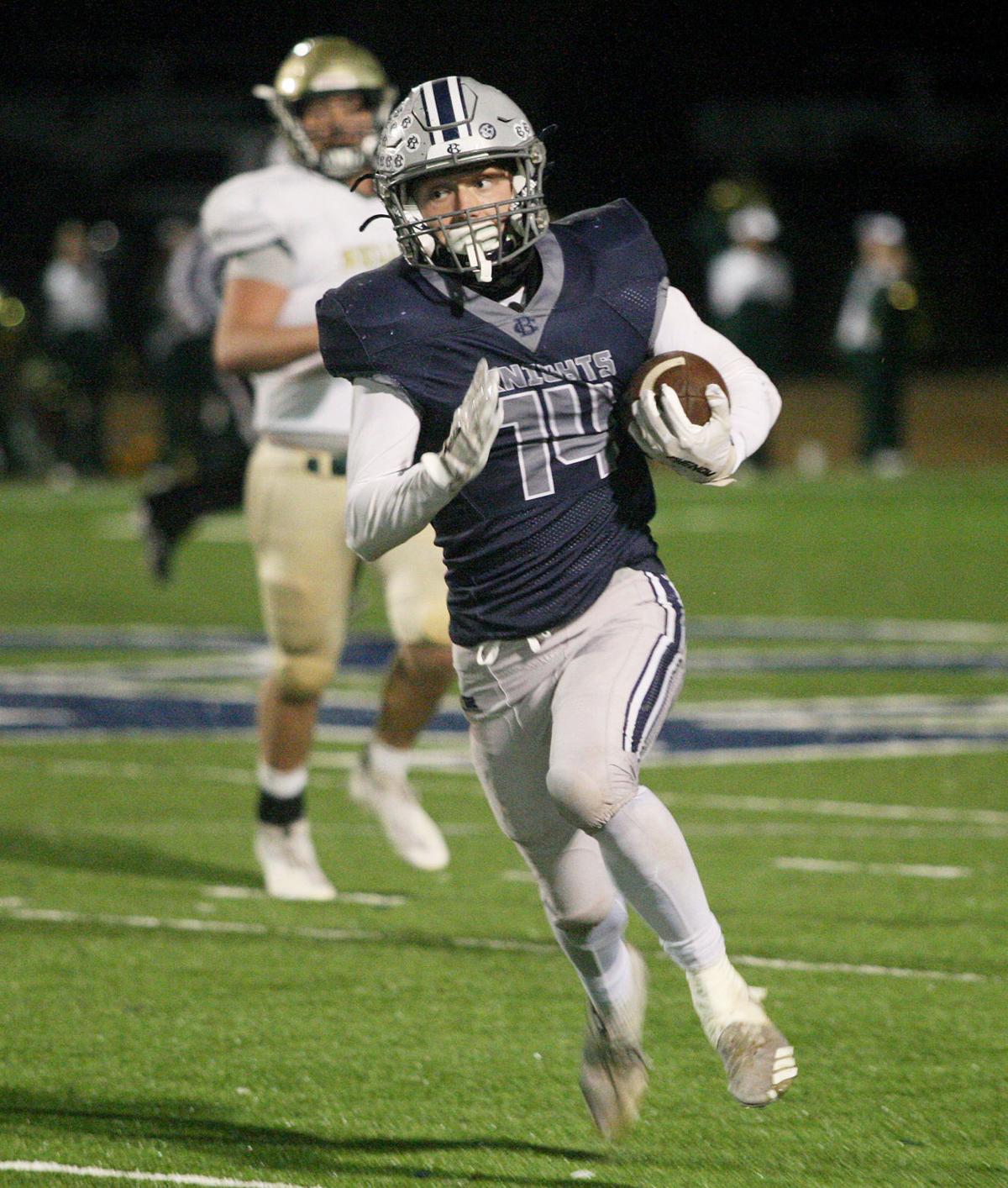 BCA receiver Ty Whiting tries to haul in a pass during Friday's game.

Bethlehem Christian Academy wrestled Bulloch Academy to a draw as the clock ticked to zero Friday, Nov. 12, in the first round of the GISA Class AAA playoffs. But the visiting Gators got the final bite, downing the Knights 20-14 in overtime.

Gator sophomore Isaiah Smart scored from 11 yards out to end the game after a Knight pass was picked off at the 1-yard line on the first possession of overtime.

The Knights ended their season at 7-5, while Bulloch Academy advanced to the state quarterfinals and a showdown Nov. 19 with top-seeded and two-time defending state champion John Milledge Academy.

“So proud of our kids, and our coaches worked really hard,” said BCA head coach Bruce Lane, after his guys gathered with Bulloch Academy in a post-game prayer huddle. “Tonight exemplified their passion and their effort. Obviously, we came up a little short, but we played 48 minutes and that wasn’t enough to settle it, had to go to overtime, and they made some plays in overtime and we didn’t.”

Both teams struggled to put points on the board Friday as penalties and turnovers took their toll on both offenses. A pitch from quarterback Ben Aaron on fourth-and-2 led to a short-yardage score on the first play of the second quarter, putting the Gators up 7-0.

But BCA answered moments later when Ben Reed connected with tight end Lawson Wooten in back of the end zone on third-and-10 from the Bulloch 16-yard line with 5:34 before intermission.

The Gators (5-6) threatened to score again in the half, recovering a fumble on the Knight 25, but came up empty handed, sabotaging themselves with penalties.

The Gators returned an interception to the Knight 37 on the first possession of the second half. Rodney Hill then scored from 33 yards out to put Bulloch up 14-7.

A short punt set the Knights up at the Bulloch County 41, then Elijah Goddard broke free down the left sideline for 34 yards to set up the home squad, with Joshua Adams carrying the ball in from a yard out with 4:19 to go.

The Gators’ Smart then broke free for a 71-yard touchdown score with 4:12 to go in the game, but that score was nullified by offsetting penalties, with a replay of the down. The Gators then drove to the Knight 13, but a 30-yard field-goal attempt fell short with 41 seconds to go in the game. BCA ran the clock out to force overtime.

BCA players shed tears after the game, a school-best season coming to a close. But Lane said this season will be remembered.

“Seven wins, most in school history,” he said. “Started off on a roll and a lot of great kids. We lose 11 really great seniors, and it’s going to be tough to replace those guys, but they’ve left a legacy and foundation for our younger kids.”

Several BCA players will wear the Knights uniform one or two more times next month in all-star games, while others earned all-region recognition in 4-AAA.

Whiting and Cavoretto will also be joined by Reed, Joshua Adams, offensive/defensive lineman Logan Garmon and kicker Brady Logan in the Gatlinburg All-American Bowl, set for Dec. 18 in Gatlinburg, Tennessee. Lane will serve as an offensive coordinator in that game.

Whiting caught 53 passes for 840 yards and scored six touchdowns in 12 games this fall for the Knights. Cavoretto, the team's starting middle linebacker, led the Knights with 72 tackles and recovered two fumbles. JoJo Adams had 49 tackles out of his linebacker spot and two interceptions, one of which he returned for a touchdown.

In his first year as the team's starting quarterback, Reed, a junior, threw for 1,654 yards and 15 touchdowns against nine interceptions. Joshua Adams had a breakout sophomore season in the backfield, rushing for 1,242 yards (6.2 a carry) and 16 touchdowns while also catching three touchdown passes. Logan was a perfect 45-of-45 on extra-point of attempts and 5-of-8 on field goal tries, while Garmon was a key part of the Knights' efforts along the lines of scrimmage.