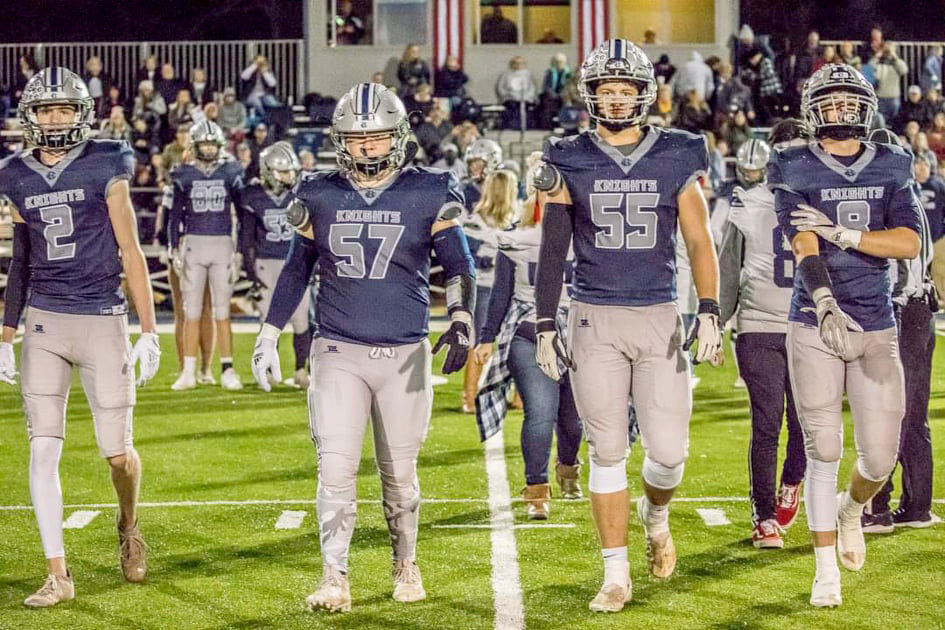 From left: Bethlehem Christian Academy seniors Ty Whiting (WR/DB), Jojo Adams (LB/OL), Logan Garmon (DL/OL) and Chandler Cavoretto (MLB/TE) have all been key cogs in the Knights' 7-4 season to this point. BCA will host Bulloch Academy at 7:30 p.m. Friday, Nov. 12, in the first round of the GISA Class AAA playoffs. 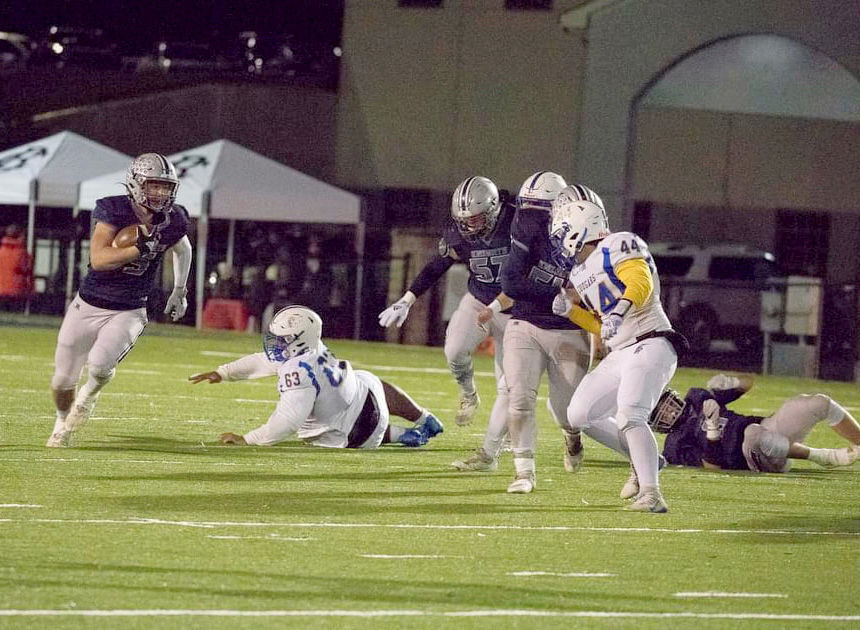 Sophomore Joshua Adams rushed for 227 yards and five touchdowns in BCA's 52-20 win last week over Creekside Christian and enters the playoffs with 1,223 rushing yards and 15 touchdowns on the year. 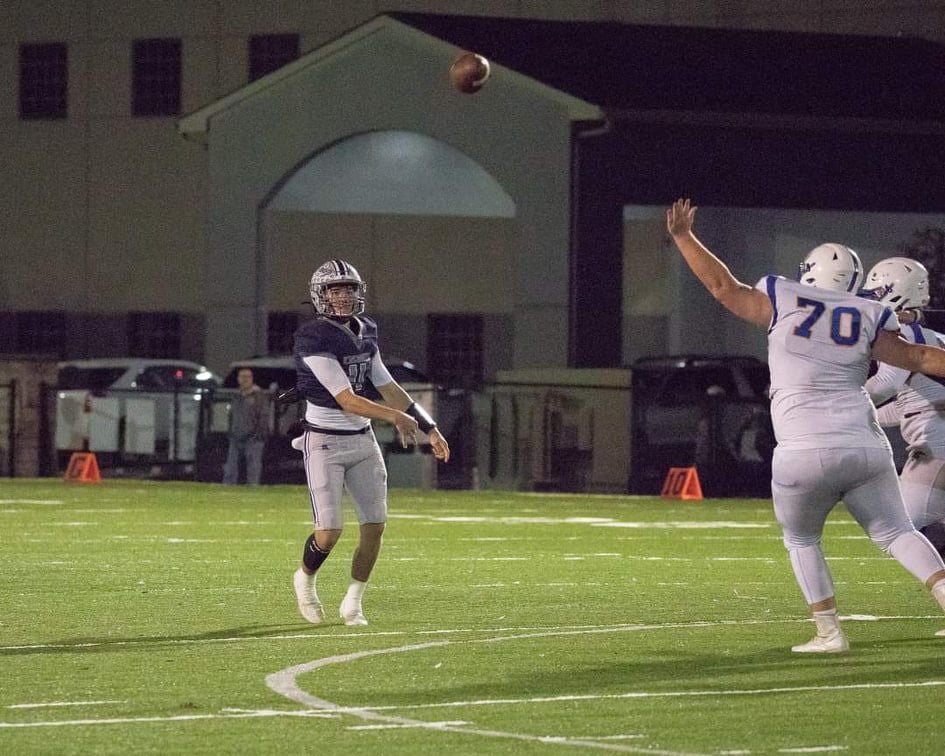 BCA junior quarterback Ben Reed has thrown for 1,610 yards and 14 touchdowns this season while adding seven more touchdowns on the ground in his first year as the team's starter.

From left: Bethlehem Christian Academy seniors Ty Whiting (WR/DB), Jojo Adams (LB/OL), Logan Garmon (DL/OL) and Chandler Cavoretto (MLB/TE) have all been key cogs in the Knights' 7-4 season to this point. BCA will host Bulloch Academy at 7:30 p.m. Friday, Nov. 12, in the first round of the GISA Class AAA playoffs.

Sophomore Joshua Adams rushed for 227 yards and five touchdowns in BCA's 52-20 win last week over Creekside Christian and enters the playoffs with 1,223 rushing yards and 15 touchdowns on the year.

BCA junior quarterback Ben Reed has thrown for 1,610 yards and 14 touchdowns this season while adding seven more touchdowns on the ground in his first year as the team's starter.

History will again be on the line for Bethlehem Christian Academy on Friday, Nov. 12. After closing out the regular season with a victory last week that gave the Knights the most wins in a season in school history, the Knights will attempt to win their first ever playoff game Friday when they play host to Bulloch Academy at 7:30 p.m. in the first round of the 10-team GISA Class AAA state tournament.

The winner gets a quarterfinal matchup with top-seeded and two-time defending state John Milledge Academy in Milledgeville next week.

“Everyone’s excited around campus,” BCA second-year head coach Bruce Lane said ahead of this week’s matchup with the Gators. “Obviously, we set goals as a team to begin the year. For us, we certainly wanted to win more than we lost and qualify for the playoffs. Then, once you qualified, you hope to be in a position to host. So we’re three for three so far. We know we’re going to be playing a good, quality opponent Friday night. We’re excited about the opportunity to go out in front of our home crowd and try to win our first playoff game. That’s all we’re focused on. We can only control this week.”

The Knights (7-4) assured themselves of a first-round home game and the chance to play at home one more time this season by pummeling Creekside Christian Academy 52-20 at home last week in the regular-season finale.

Sophomore running back Joshua Adams had a monster night, finishing with 227 yards on 17 carries and scoring five touchdowns. Elijah Goddard had a rushing touchdown to go along with an 87-yard kickoff return that set up a Knights' score, Jojo Adams returned an interception for a touchdown, and Brady Logan added a 34-yard field goal as the Knights snapped a three-game losing skid.

The win over the Cougars locked in BCA as the No. 8 seed and set up the matchup with ninth-seeded Bulloch Academy (4-6) — a game that on paper shapes up to be a potentially close one.

“That’s what you would expect, the way the new format is set up,” Lane said. “(The GISA) wanted competitive first-round games, and this certainly does lend itself to that scenario. We hope we’re able to go out there and play well, come out on top and keep playing into next week.”

The Gators, who enter play Friday averaging 25.3 points a game while allowing 21.8, started out 0-4 but have had a stronger second half. They had won four out of their last five contests prior to a 50-21 loss to Pinewood Christian (9-1), the No. 2 seed in the playoffs.

The Gators recently got back talented senior Rodney Hill, a Florida State commit who lines up at receiver and some in the backfield while playing safety on the defensive side of the ball. After missing most of the season due to an injury, Hill should provide a boost to an offense that has been bitten hard by the injury bug and has played multiple quarterbacks, with sophomore Brennan Perossa currently holding the reins.

“We’re going to game plan as if (Hill has) played the entire year,” said Lane, whose Knights are allowing 24.3 points a game, though that average was largely inflated by the team’s losses to Thomas Jefferson Academy (40-14), John Milledge (53-14) and Westfield School (47-35). “We don’t have a crystal ball for what (Bulloch Academy’s) plans are. We know they do a lot of (run-pass option) and like to get the ball out on the perimeter and try to put stress on you. We’ve got to make sure we do a good job of getting properly aligned and recognizing those sets so we’re in position to make plays. And I think our defensive coaches have done a good job of helping our kids recognize that all year.

“Anytime you get to this point, the outcome is likely going to come down to the kicking game and turnovers. We feel like we’ve had a great kicking game all year. Defensively, we just can’t give up the big play, and offensively we’ve got to protect the football.”

The Knights, who enter play averaging 29.5 points a game, have demonstrated an explosive offense in their own right and have shown the ability to hurt opposing defenses on the ground and through the air.

Junior quarterback Ben Reed has been steady for the Knights in his first year as the starter, throwing for 1,610 yards at a 59.9% completion rate and 14 touchdowns against 7 interceptions while adding seven more rushing touchdowns.

Adams’ big night Friday gave him 1,223 rushing yards on the season at 6.8 yards a carry and 15 touchdowns to go along with three touchdown receptions. Senior receiver Ty Whiting, who is looking to earn a second straight all-state selection, has been Reed’s favorite target, hauling in 53 receptions for 823 yards and six touchdowns. Meanwhile, sophomore tight end Lawson Wooten has had a breakout season with 25 catches for 453 yards and four touchdowns.

“We’ve attempted to be balanced throughout the year, and I think we’ve accomplished that,” Lane said. “We’re at over 3,000 yards of total offense for the year and we feel really good about that. We got in a rhythm running the ball the other night (against Creekside) based on what they were giving us, and it worked to our advantage. Our goal is to continue focusing on what the opposing defense gives you and to try to make plays and make the most of our opportunities.

“(Bulloch Academy’s defensive) strength is their front four, especially on the interior, and their two inside linebackers. They’re all really good football players, so balance is going to be key. It’s a simple game, no matter how you slice and dice it. We’ve got to be good at blocking and tackling.

“There’s always an ebb and flow to every game. In every competitive game, four or five plays will likely determine the outcome. You don’t always know when those plays are going to rear their heads, but you just need to be ready when they come.”

Lane said BCA will go into Friday’s game a confident bunch after a lull that followed a 5-0 start. He said the team began to get its confidence back with a better performance against Westfield and that carried over into last week’s rout of Creekside.

“I just would really encourage people to come out and take a look at us Friday night,” Lane said. “I feel like the kids have worked really hard to get to this point. We came out of the gate quick before we got into the meat of our schedule, but we’ve done some things that no other team here has done, and we’re looking to continue that.

“We’ve earned the right to be here and are excited for the opportunity.”