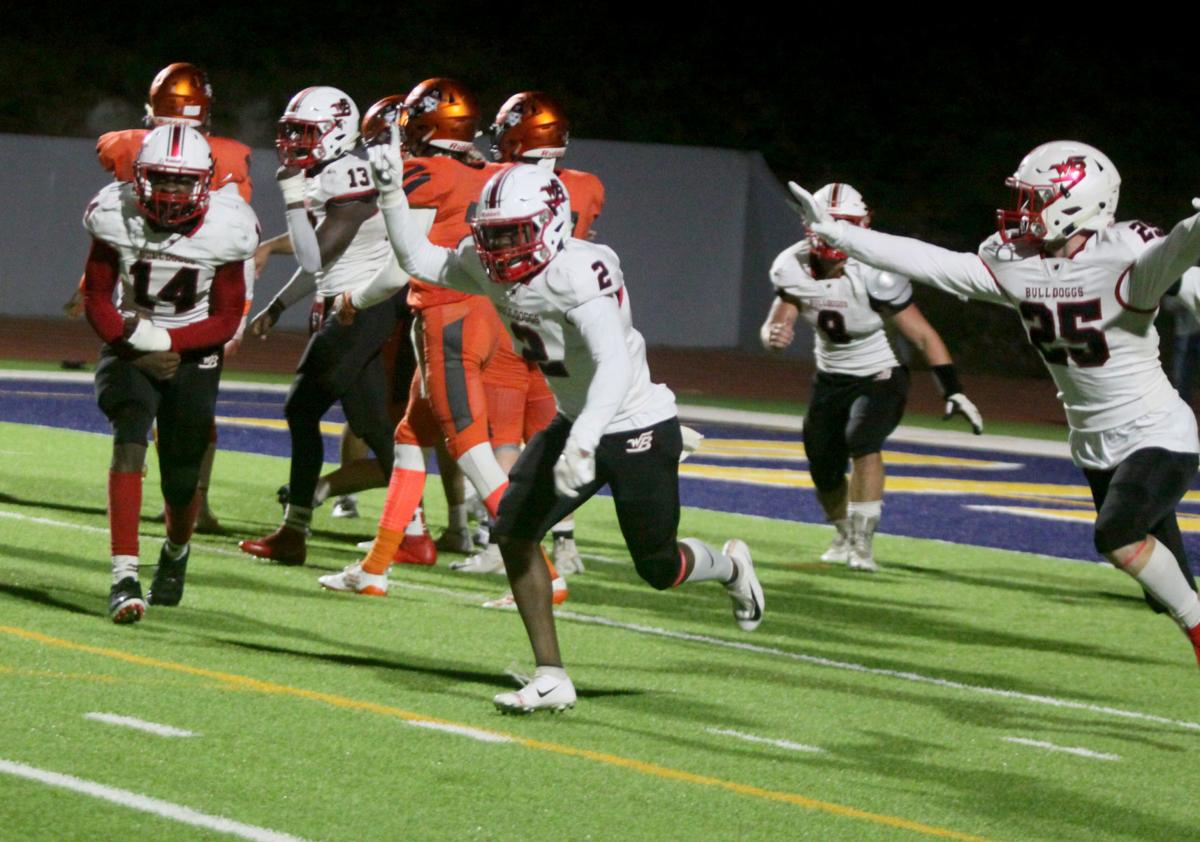 Zack Price (2), Carson Jackson (25) and teammates celebrate a blocked extra-point attempt that gave the Bulldoggs a 41-40 victory over Habersham Central on Friday, Nov. 1. 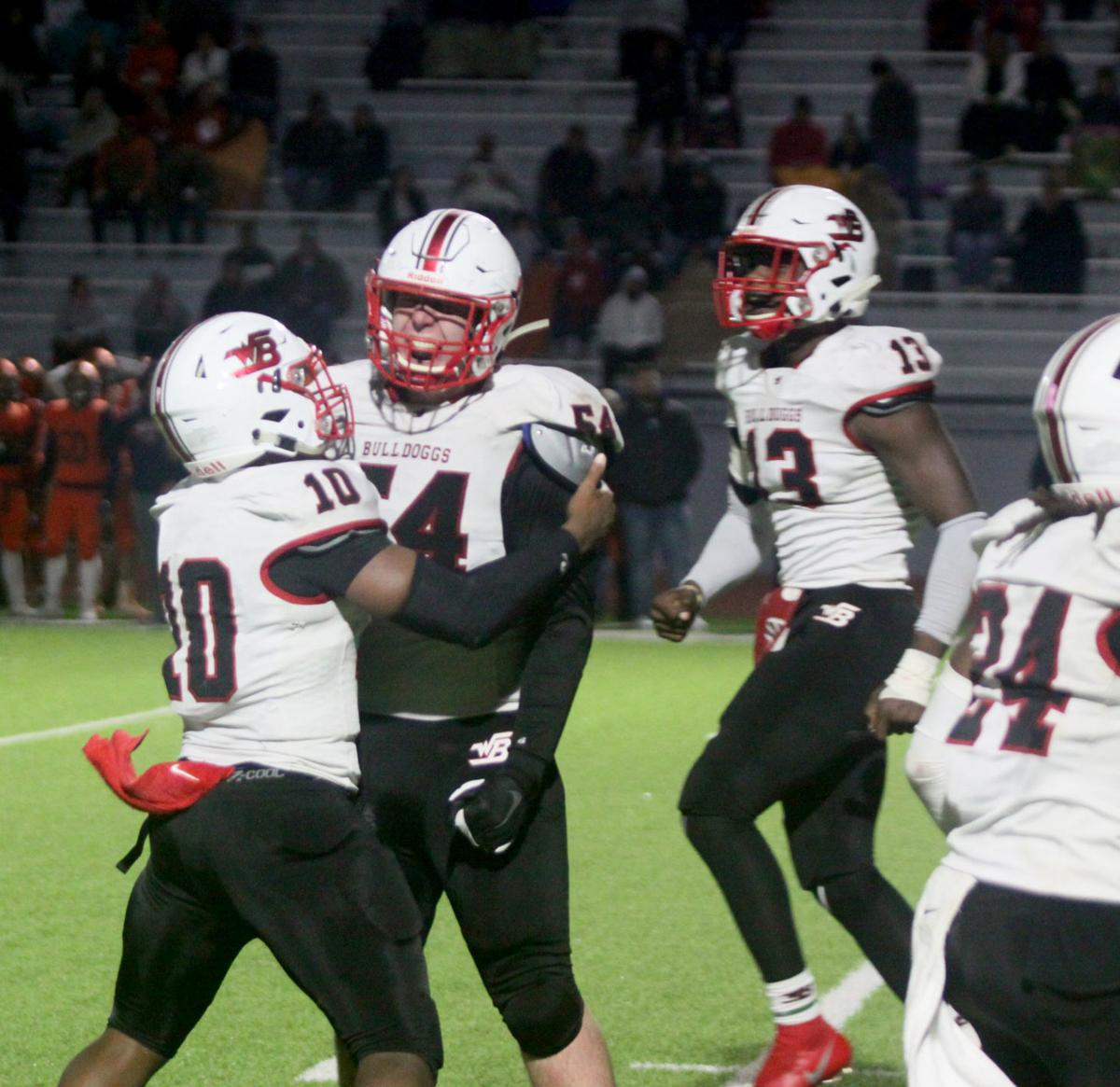 Winder-Barrow junior Jacob Merrifield (54) is met by teammate Jhaydon Sullivan after blocking an extra-point attempt to preserve a one-point win for the Bulldoggs. 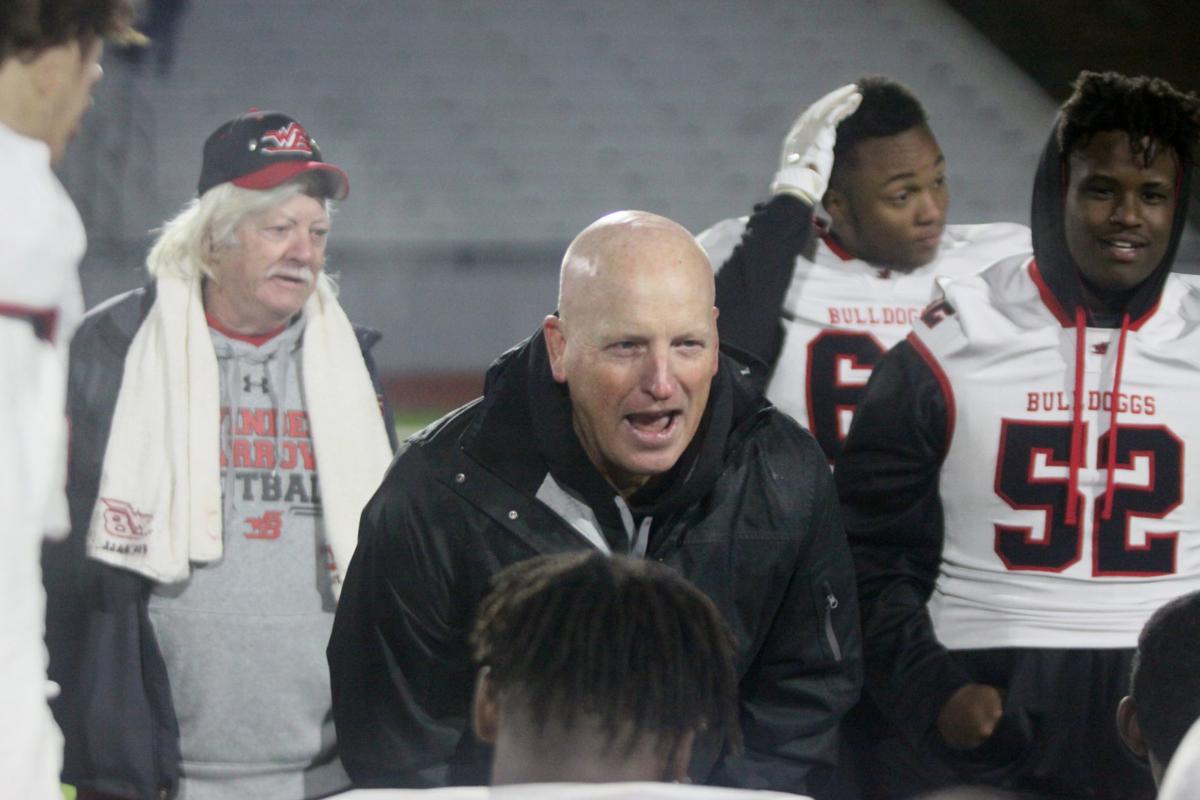 Winder-Barrow coach Ed Dudley talks to his team after the Bulldoggs defeated Habersham Central 41-40 on Friday, Nov. 1, to clinch a playoff berth. 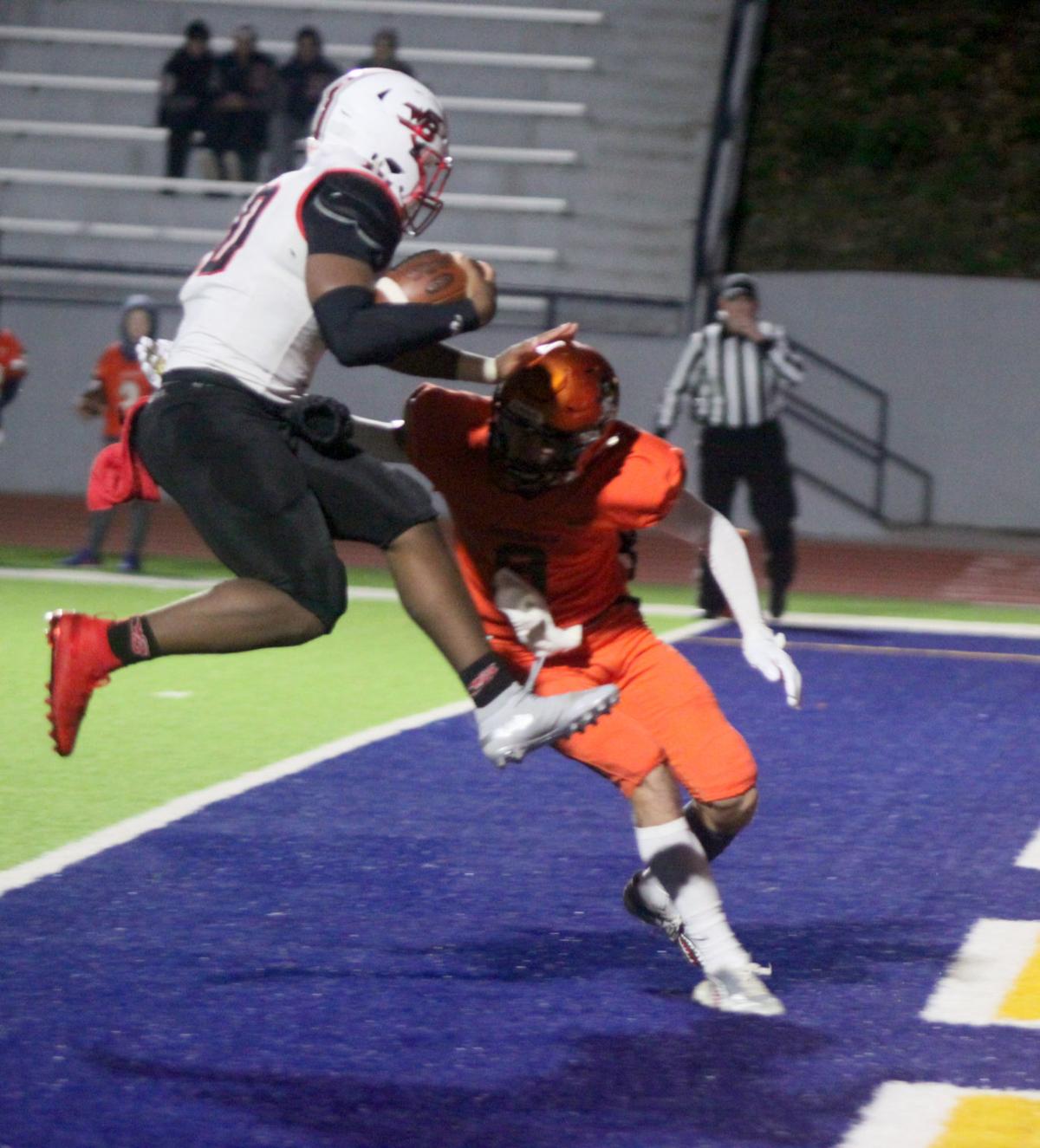 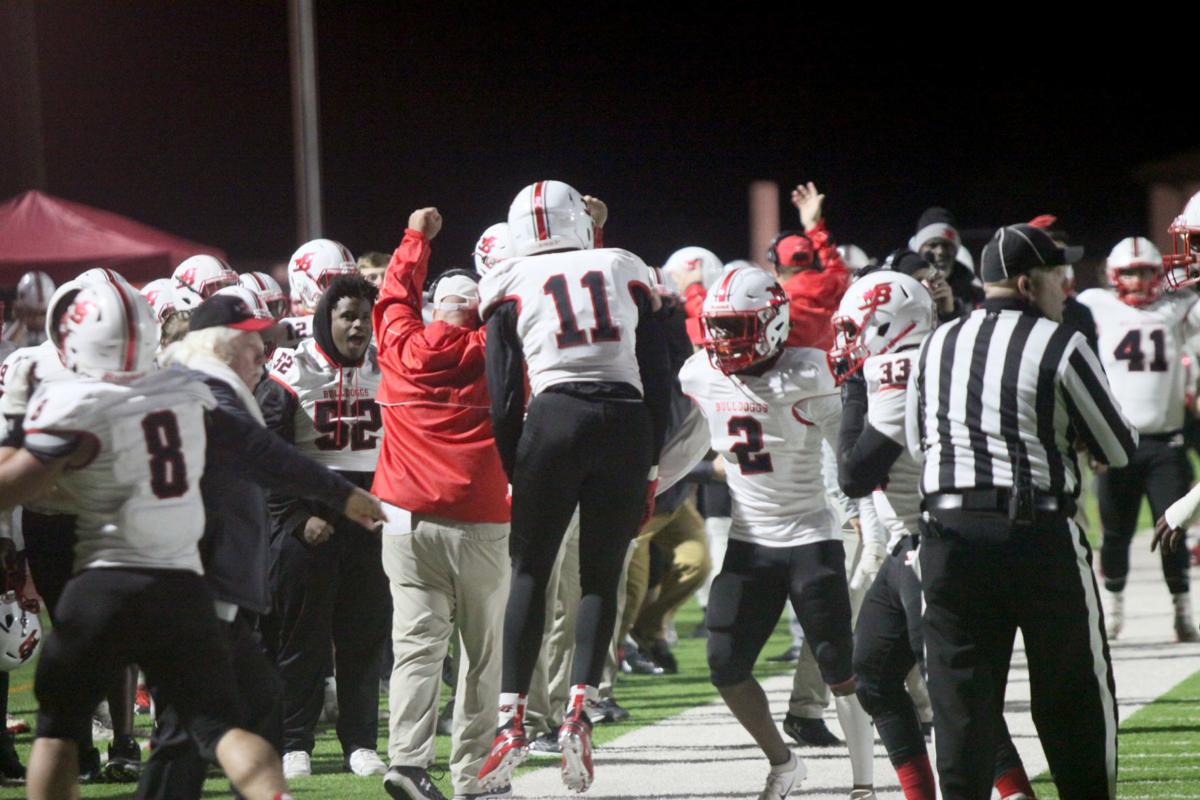 Winder-Barrow's Timmy Presley (11) celebrates after recovering a fumble during the third quarter of Friday's game. 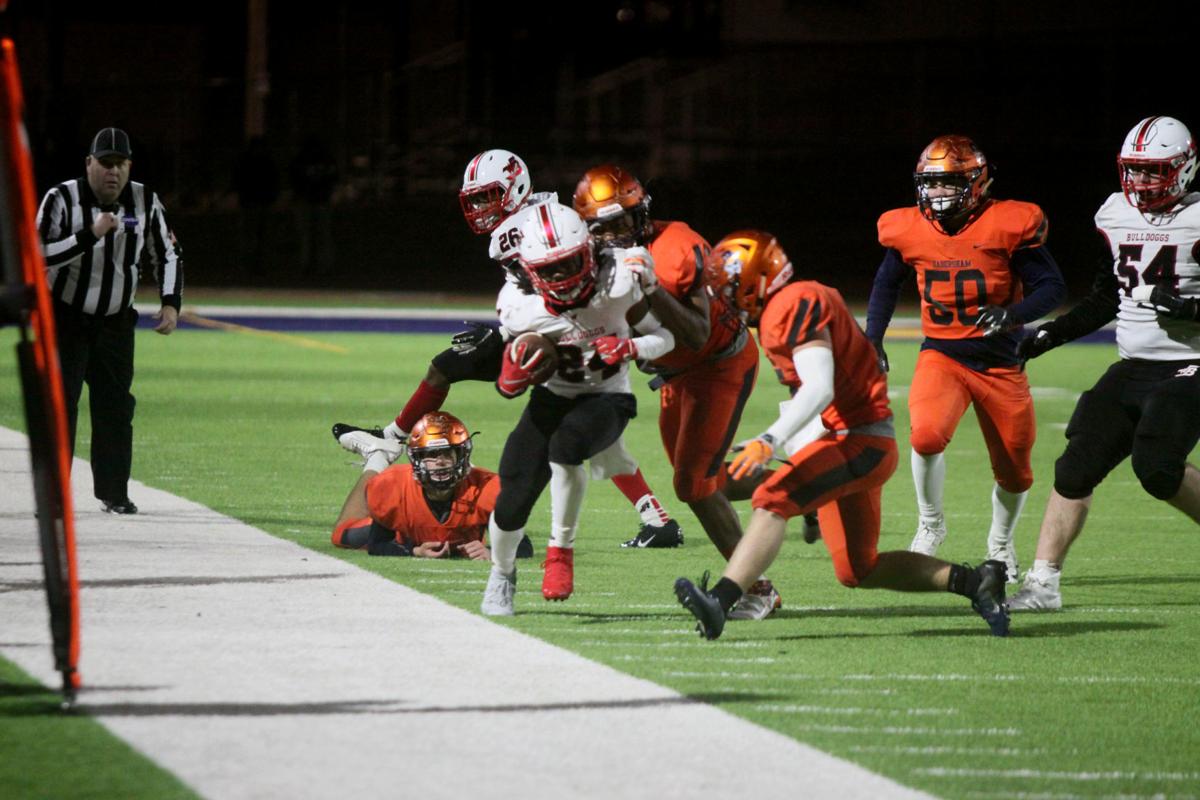 Winder-Barrow running back J.C. Green looks for yardage down the sideline during the third quarter Friday. 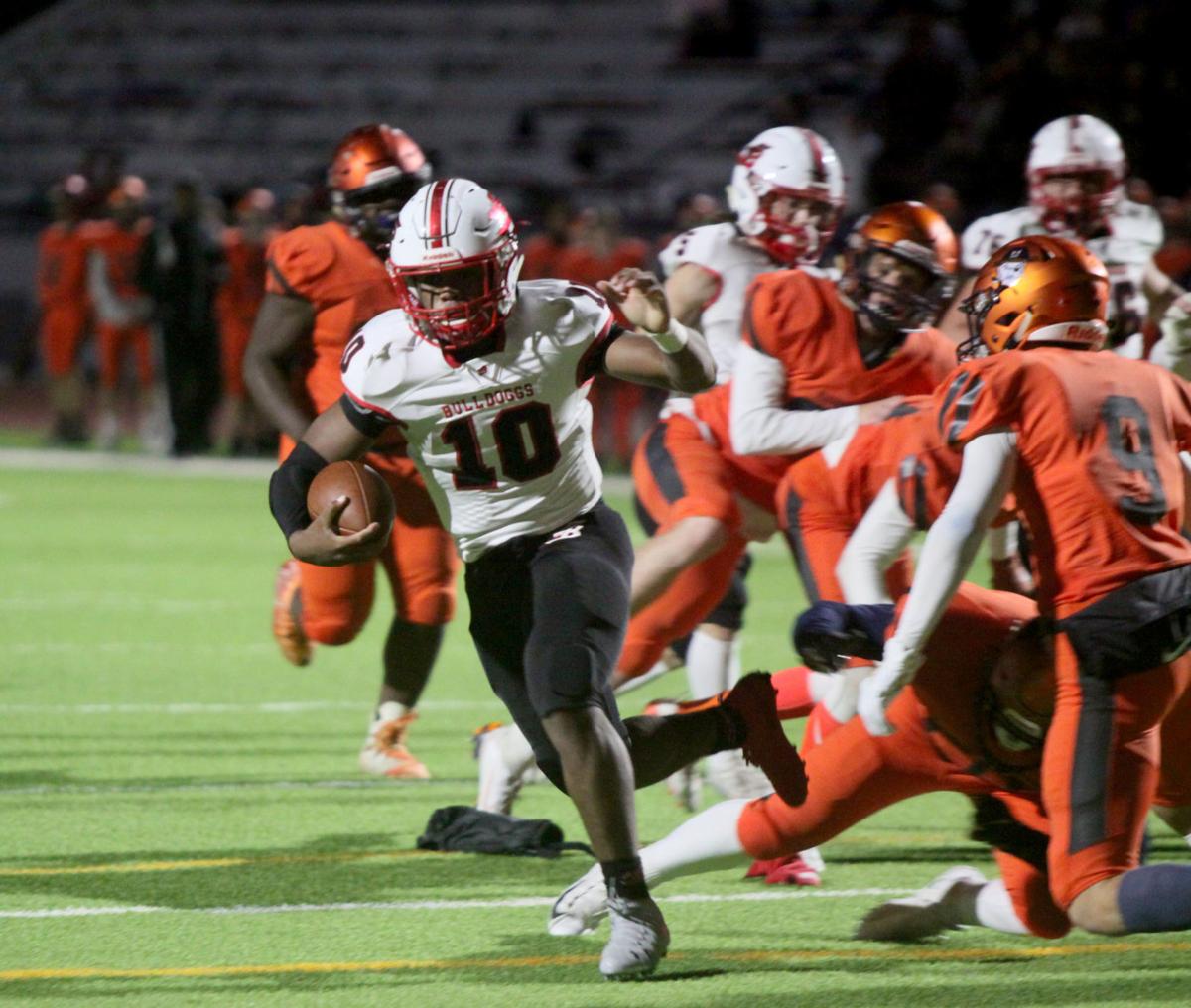 Winder-Barrow's Jhaydon Sullivan runs for a 28-yard touchdown during the second quarter against Habersham Central. 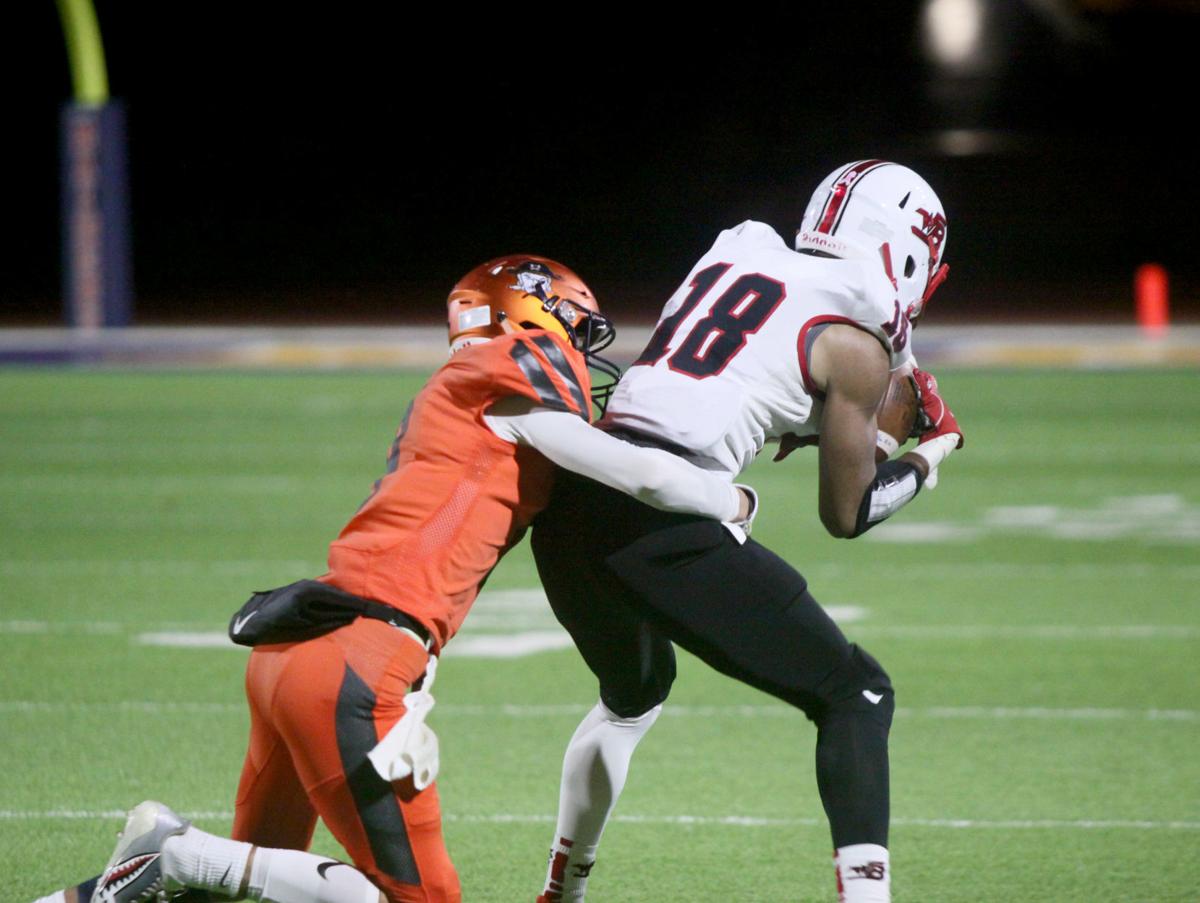 Winder-Barrow's Brent Walker fights for extra yardage after a catch against Habersham Central. 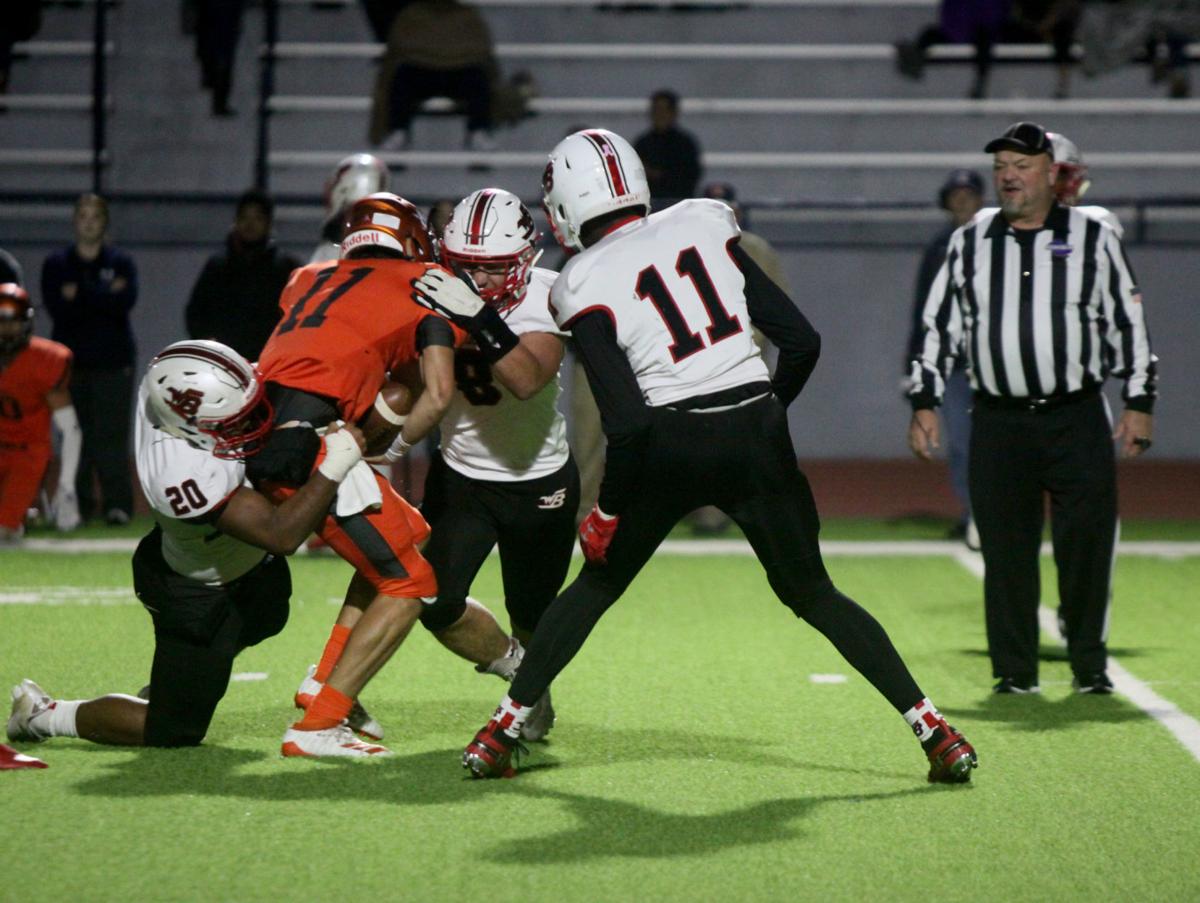 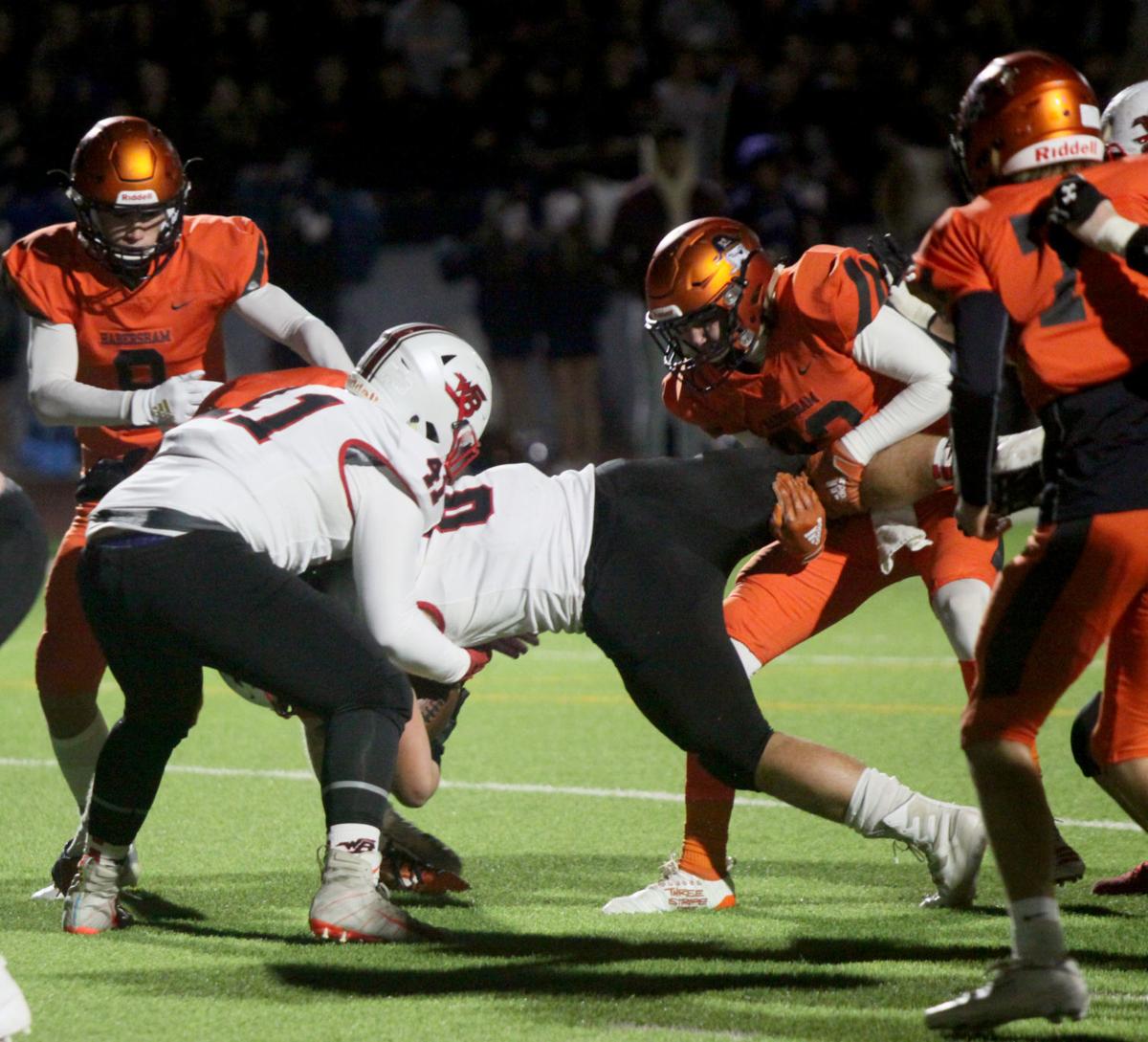 Winder-Barrow's Chandler Maxwell (8) is pulled along by offensive lineman Shawn Poole while fighting for yards. 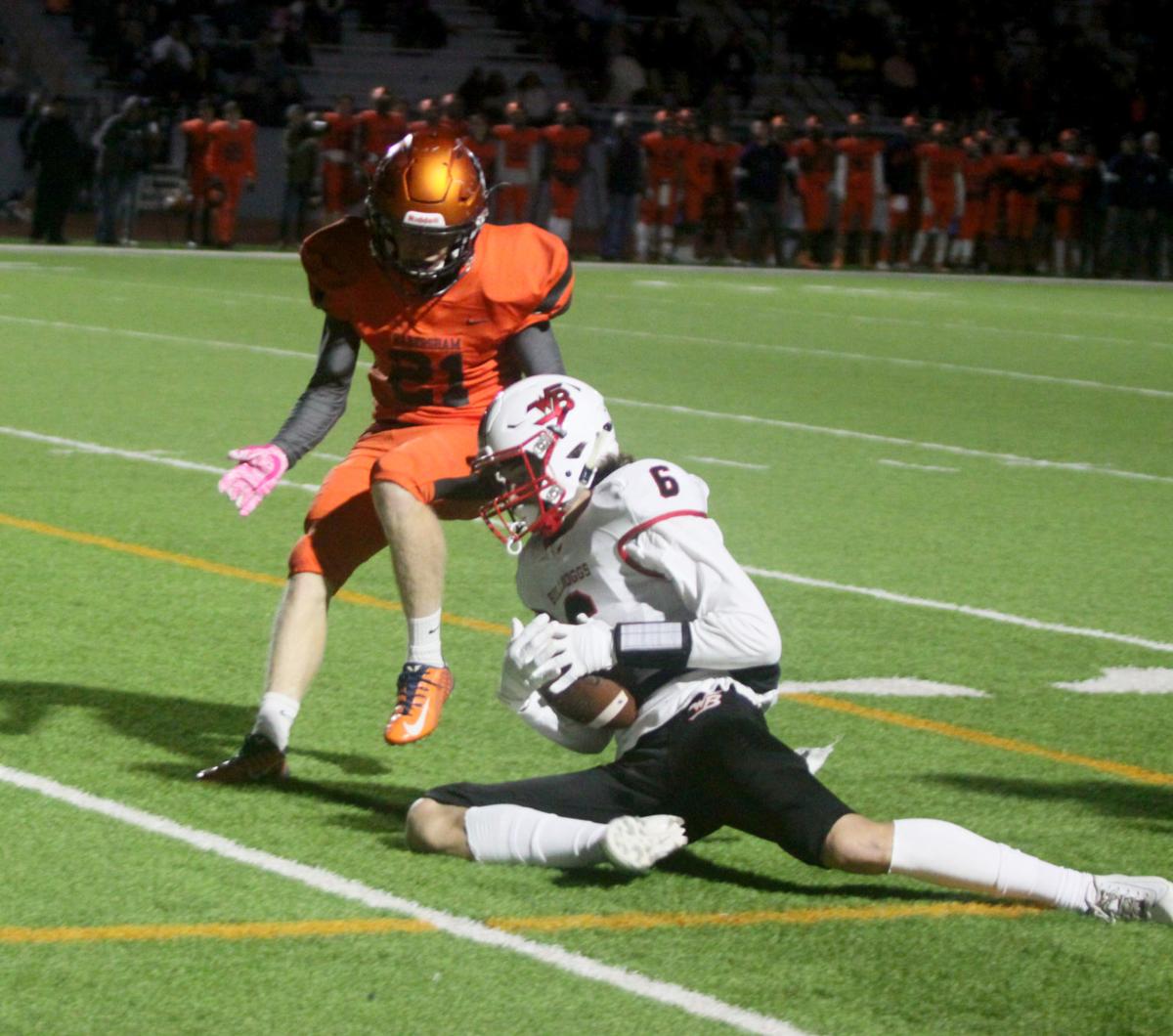 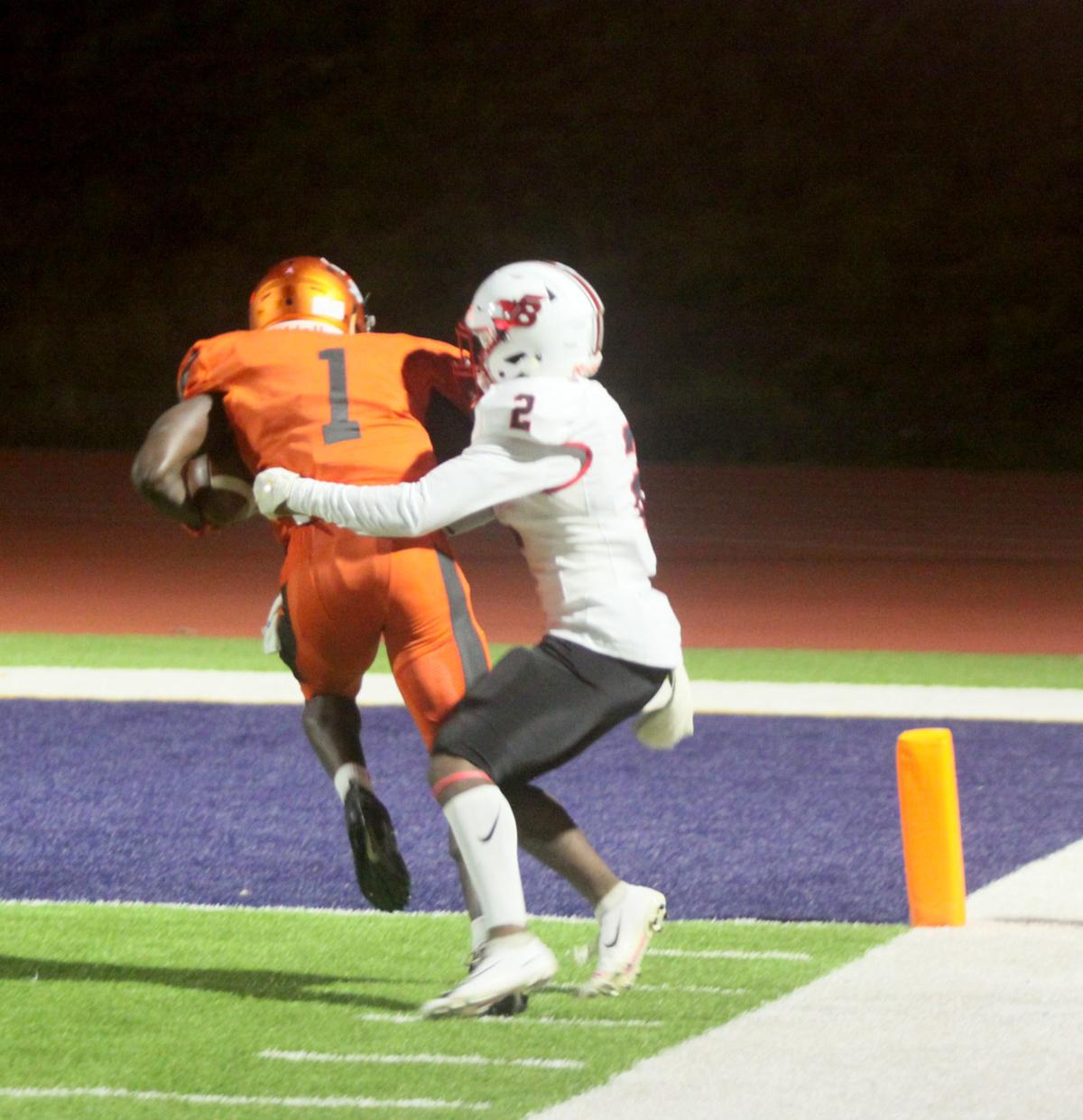 Winder-Barrow's Zack Price tries to keep Habersham Central's Joshua Pickett out of the end zone during the first quarter Friday.

Zack Price (2), Carson Jackson (25) and teammates celebrate a blocked extra-point attempt that gave the Bulldoggs a 41-40 victory over Habersham Central on Friday, Nov. 1.

Winder-Barrow junior Jacob Merrifield (54) is met by teammate Jhaydon Sullivan after blocking an extra-point attempt to preserve a one-point win for the Bulldoggs.

Winder-Barrow coach Ed Dudley talks to his team after the Bulldoggs defeated Habersham Central 41-40 on Friday, Nov. 1, to clinch a playoff berth.

Winder-Barrow's Timmy Presley (11) celebrates after recovering a fumble during the third quarter of Friday's game.

Winder-Barrow running back J.C. Green looks for yardage down the sideline during the third quarter Friday.

Winder-Barrow's Jhaydon Sullivan runs for a 28-yard touchdown during the second quarter against Habersham Central.

Winder-Barrow's Brent Walker fights for extra yardage after a catch against Habersham Central.

Winder-Barrow's Chandler Maxwell (8) is pulled along by offensive lineman Shawn Poole while fighting for yards.

Winder-Barrow's Zack Price tries to keep Habersham Central's Joshua Pickett out of the end zone during the first quarter Friday.

MOUNT AIRY — In yet another classic contest with postseason implications between the two teams, Winder-Barrow and Habersham Central matched each other score for score on Friday, Nov. 1. But it was the kicking game that made all the difference.

After scoring the would-be game-tying touchdown, the Raiders lined up for the extra-point kick with 59 seconds remaining and overtime seemingly on the way. But Winder-Barrow junior Jacob Merrifield broke through the line and got a hand on Patrick Tedder’s attempt — the third blocked PAT on the night for the Bulldoggs — to preserve his team’s one-point lead and secure a 41-40 victory and a state playoff berth.

It was a proud moment for second-year Winder-Barrow head coach Ed Dudley, whose team went just 2-8 in 2018 and missed the postseason for the first time since 2013. The victory over the Raiders improved their 2019 mark to 3-5 overall and 2-2 in GHSA Region 8-AAAAAA.

In the post-game huddle with his players, Dudley told them Gainesville had beaten Apalachee, paused for a second and then yelled, “That means we’re going to the playoffs!” as roars erupted from the Bulldoggs.

“It just shows how much we’ve improved over last year,” Dudley said prior to his post-game speech. “We were getting better. We were in every game. And we were able to get a big win on the road up here in a tough atmosphere.

“We shot ourselves in the foot a lot. It wasn’t pretty. But we’ll take this win all year long.”

Merrifield’s block spoiled a clutch eight-play, 80-yard drive, put together by the Raiders in under two minutes, that was aided by a pair of penalties against Winder-Barrow and ended on an 11-yard touchdown run by senior quarterback Ryte Woodruff. After the miss by Tedder, who has been Habersham’s fill-in following a season-ending injury to the starting kicker early on, the Raiders were forced to try an onside kick with no time-outs left. But Winder-Barrow’s Jett Clack corralled the bouncing ball, clearing the way for senior quarterback Jhaydon Sullivan to kneel down a couple times and end the game.

As his teammates ran over to the band to celebrate, Sullivan stood near midfield with his shoulder pads off and soaked it all in.

“This feels amazing,” said the second-year starter, who had a career night with 195 rushing yards and four touchdowns on the ground (tying a school record) to go along with 183 passing yards. “This team has worked so hard to be where we are. I know we’ve had our ups and downs, but it’s just a pleasure to be going back to the playoffs.

“We always have fight in us. Every single game we’ve fought hard, and I’m just thankful it worked out for us tonight.”

The Winder-Barrow-Habersham Central game has worked up a reputation for being a high-scoring track meet, and Friday’s contest certainly lived up to that billing as the teams combined for over 900 yards of offense with Bulldoggs outgaining the Raiders 485-460. As sterling as Sullivan was, Woodruff was equally impressive, running for 201 yards and four second-half touchdowns while accounting for another touchdown through the air and passing for 107 yards.

Habersham (3-6, 0-4 region) jumped out quickly to a 13-0 lead less than four minutes in. Joshua Pickett returned the opening kickoff 83 yards to the Winder-Barrow 12, and the Raiders needed just two plays to get on the board as Jackson Clouatre (28 carries, 162 yards) scored on a 1-yard run. After Winder-Barrow went three and out, the Raiders took just five plays to cover 72 yards as Pickett made a leaping 31-yard touchdown catch from Woodruff to make it 13-0.

But the Bulldoggs got back in it with a six-play, 65-yard march on the next drive. Senior receiver Brett Landis came up with a big sliding grab on third down for a 39-yard gain down to the Raider 4, and Sullivan found the end zone from a yard out two plays later to cut the deficit to 13-7. Winder-Barrow went on to tie the game with 3:18 left in the first half on a 28-yard run by Sullivan, who weaved through traffic before breaking away for the score, and was poised to take the lead. But Harlin Brown pushed his extra-point attempt to the right for his first miss of the season, and the game remained deadlocked at the break.

After a Bulldogg fumble in Habersham territory on the first drive of the second half, the Raiders quickly moved 69 yards in three plays. Following an offensive holding penalty, Woodruff broke off a 53-yard run on the first play of the possession and then scored from 11 yards out two snaps later to put the Raiders up 19-13.

Winder-Barrow took its first lead of the game on a 19-yard run by Sullivan that capped a four-play, 53-yard drive and the extra point by Brown that made it 20-19 with 5:34 left in the third quarter. That lead lasted less than two minutes, though, as Woodruff broke free for a 58-yard touchdown run on the fourth play of the ensuing drive and then scored again on the two-point conversion to put Habersham up 27-20.

Still, the Bulldoggs responded with a seven-play, 58-yard drive that ended with a 4-yard touchdown run by Chandler Maxwell. The Bulldoggs then got a huge break when sophomore Omarion Smith recovered a fumble on the ensuing kick-off at the Habersham 40 and scored in three plays with Sullivan punching it in from a yard out on the final play of the third to make it 34-27.

However, Pickett struck again for the Raiders with a 78-yard return to the Winder-Barrow 21, and Woodruff’s 5-yard touchdown run knotted things back up with 9:57 to go in the game.

The Bulldoggs went right back to work with a five-play, 64-yard drive. Sullivan hit Aiden Thompson over the middle for a 22-yard gain, then ripped off a 28-yard run down to the 5 before J.C. Green (15 carries, 101 yards) punched it in from there to put the Bulldoggs up 41-34 with 7:41 remaining.

“I thought our offensive coaches did a great job,” Dudley said. “We were down 13 early, but they didn’t get away from the run game. We didn’t panic, we stayed with it, but man, what a shoot-out. I just can’t say enough about this group of kids and their leadership ability. I’m really proud of them and just happy to get a win against a real tough, resilient Habersham team.”

Winder-Barrow is locked in as the No. 4 seed for Region 8 and will face Region 6 champion Harrison (9-0) in the first round of the playoffs Nov. 15. But first, the Bulldoggs will host top-ranked Dacula in their regular-season finale Nov. 8. The Falcons (9-0, 4-0) won their fourth consecutive Region 8 title Friday with a 34-10 victory over Lanier. Lanier (8-1, 3-1) and Gainesville (5-4, 3-1) will play next week for the second and third seeds.

While the game against Dacula will be meaningless in terms of playoff standings, it will be good preparation for Dudley’s team before it takes on the second-ranked Hoyas in Kennesaw the following week.

“We’ve got a chance to play the number one team in the state in our stadium,” Dudley said. “We’ll see what we can do.”