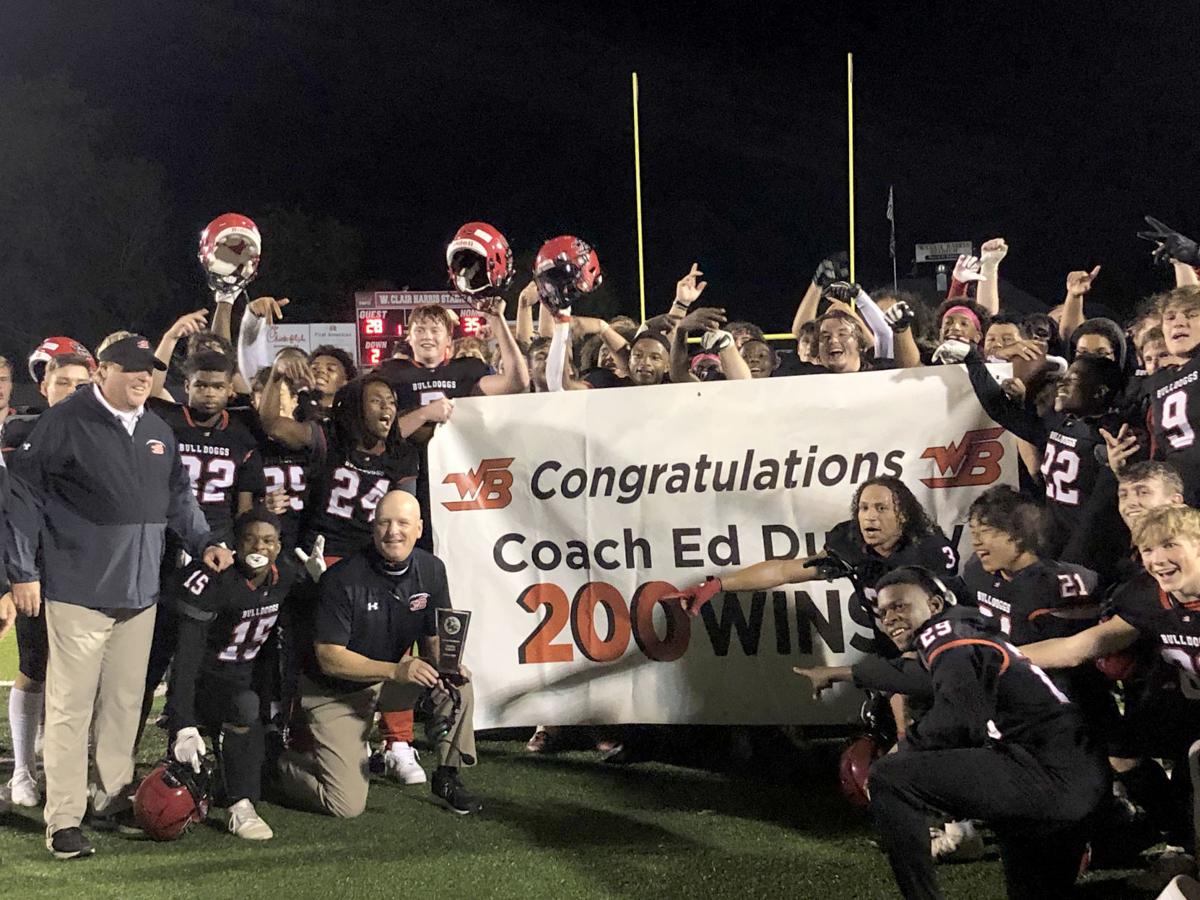 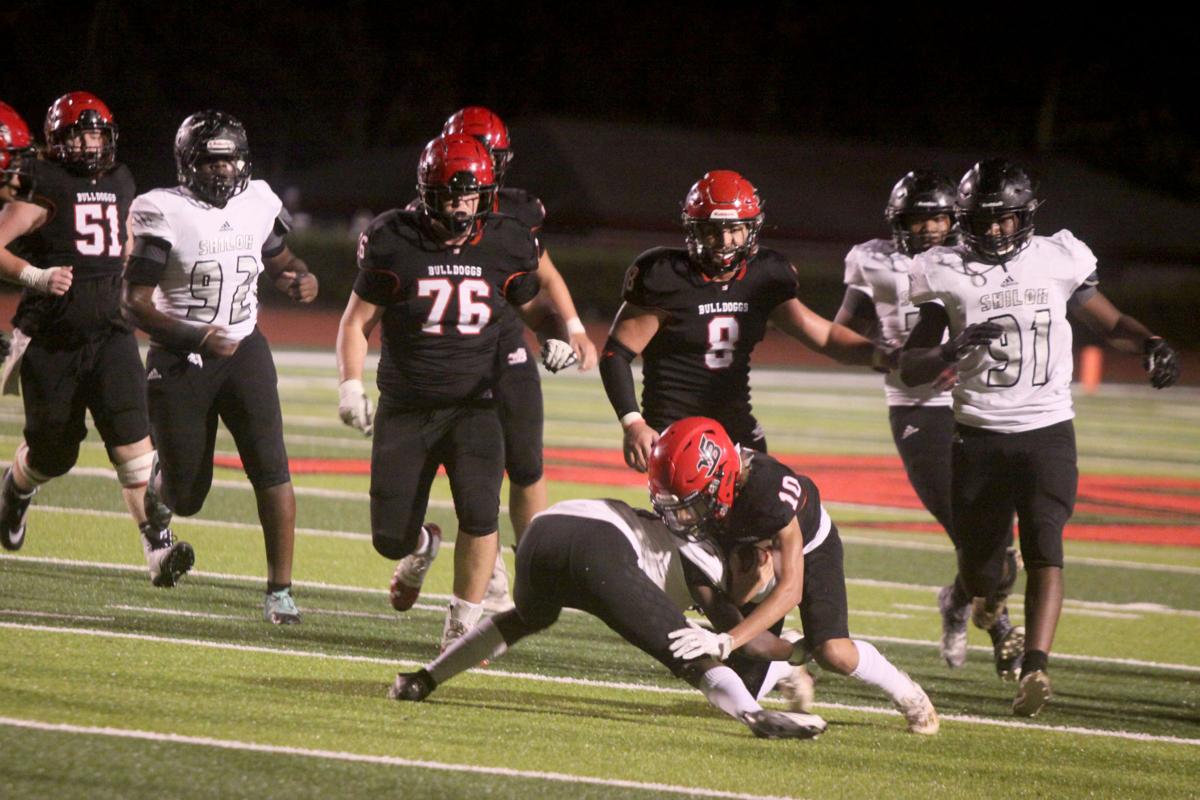 Winder-Barrow receiver Tre Gaudlock picks up yardage during the first half of Friday's game. 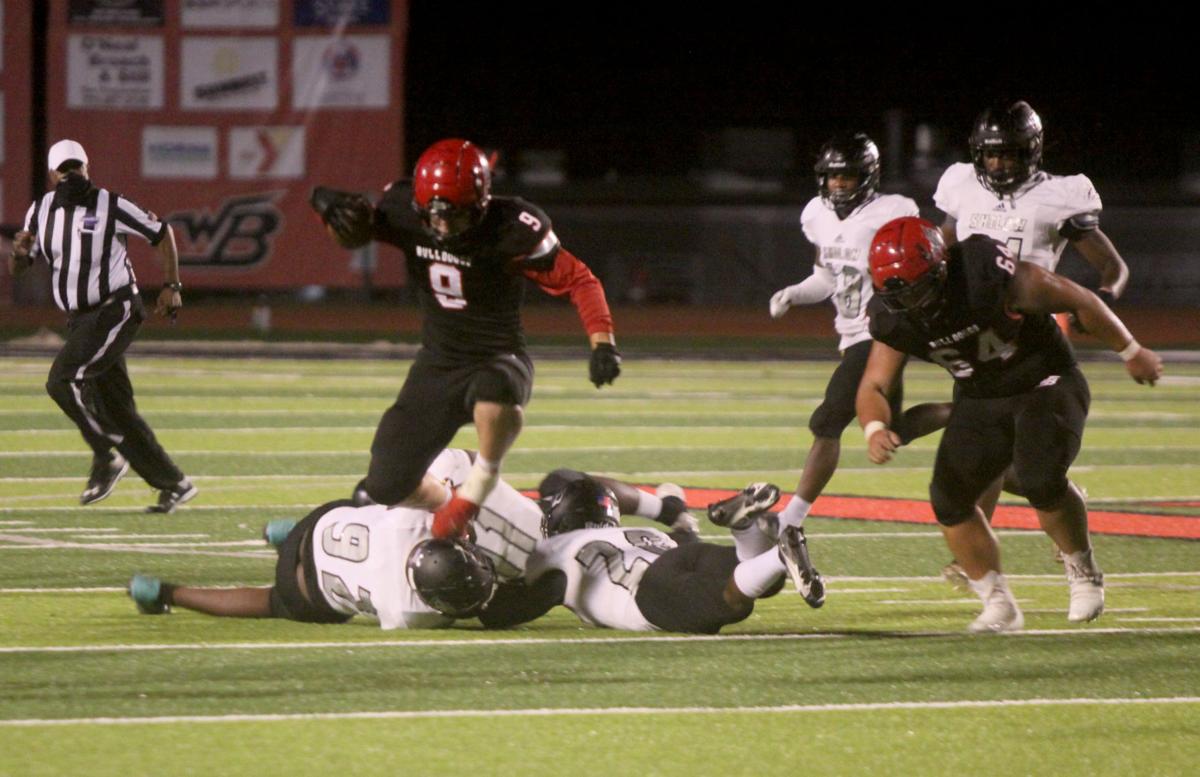 Sophomore running back Aidan Thompson ran for 165 yards on 17 carries and scored three touchdowns for the Bulldoggs. 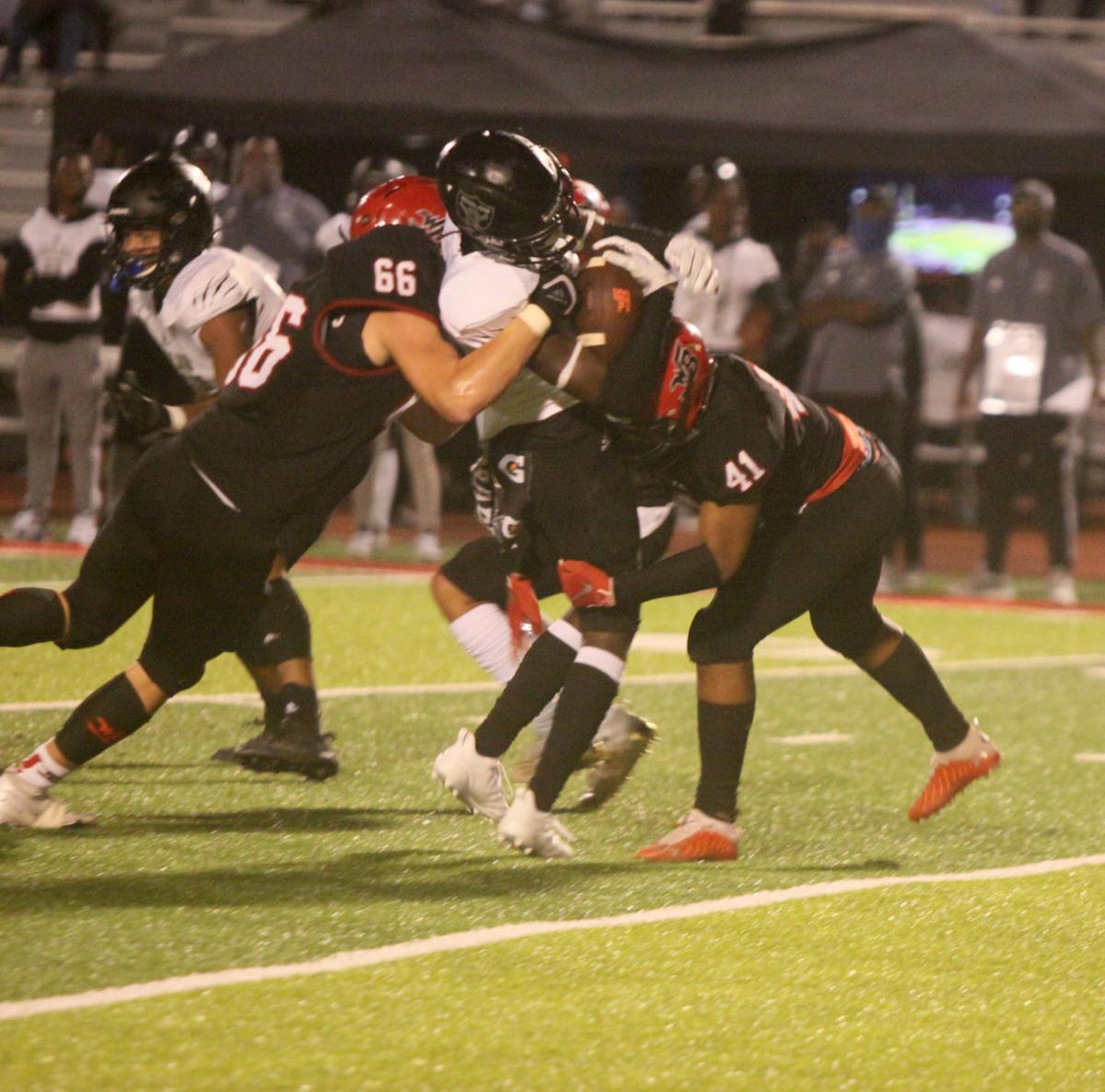 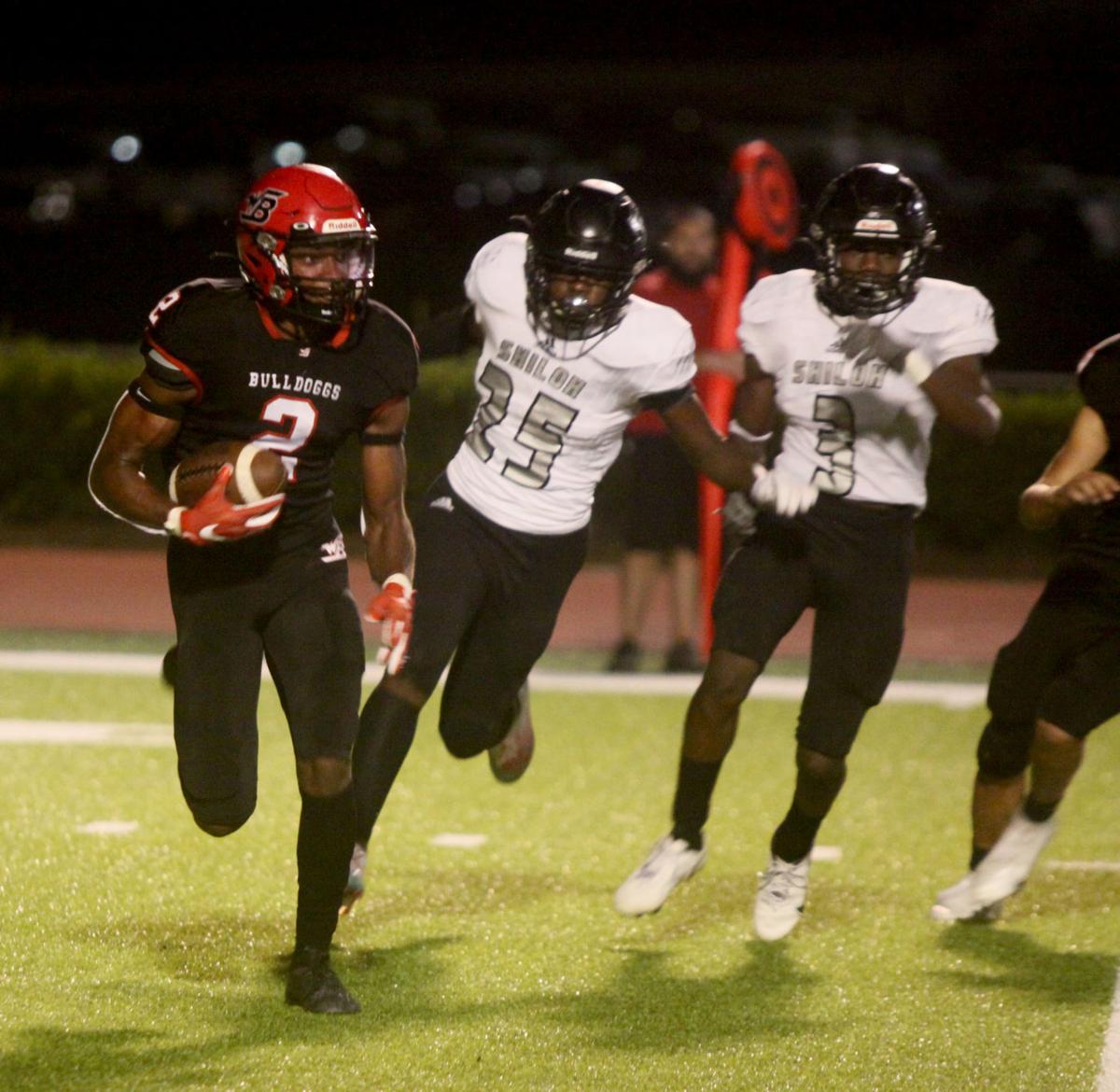 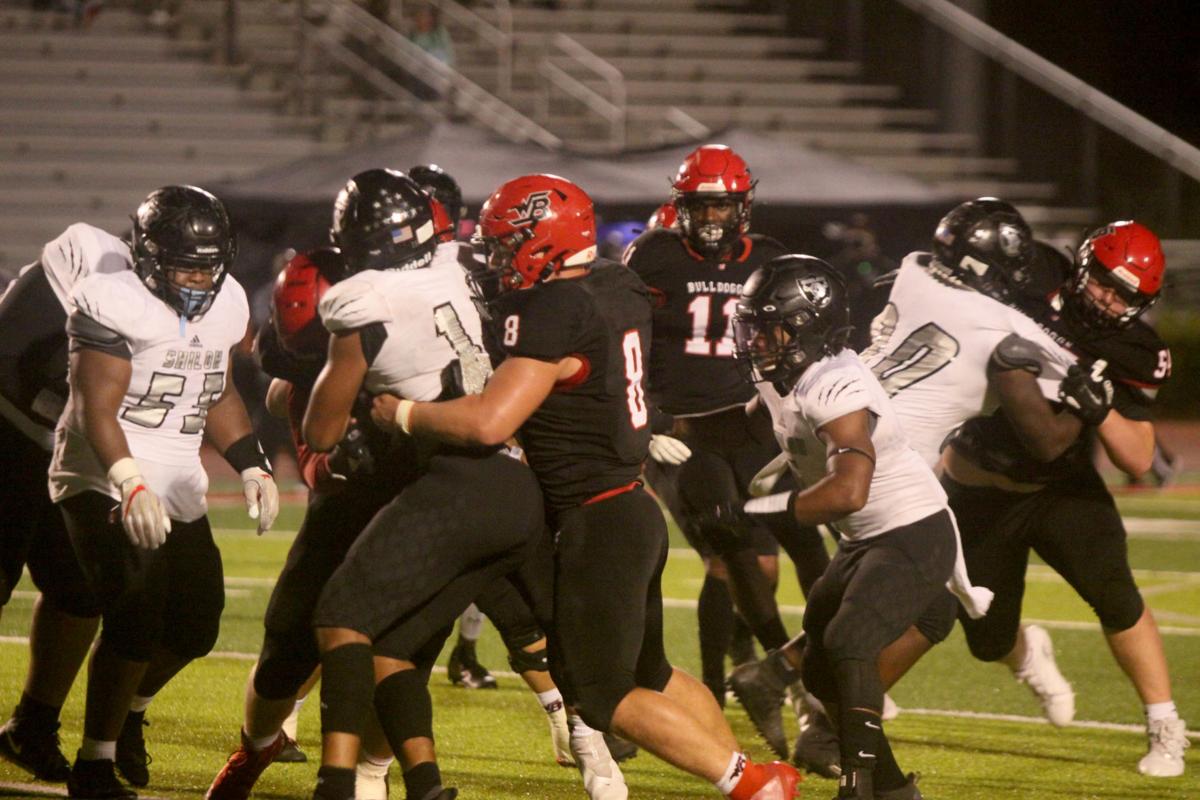 Winder-Barrow linebacker Chandler Maxwell (8) comes up with a big defensive stop against Shiloh. 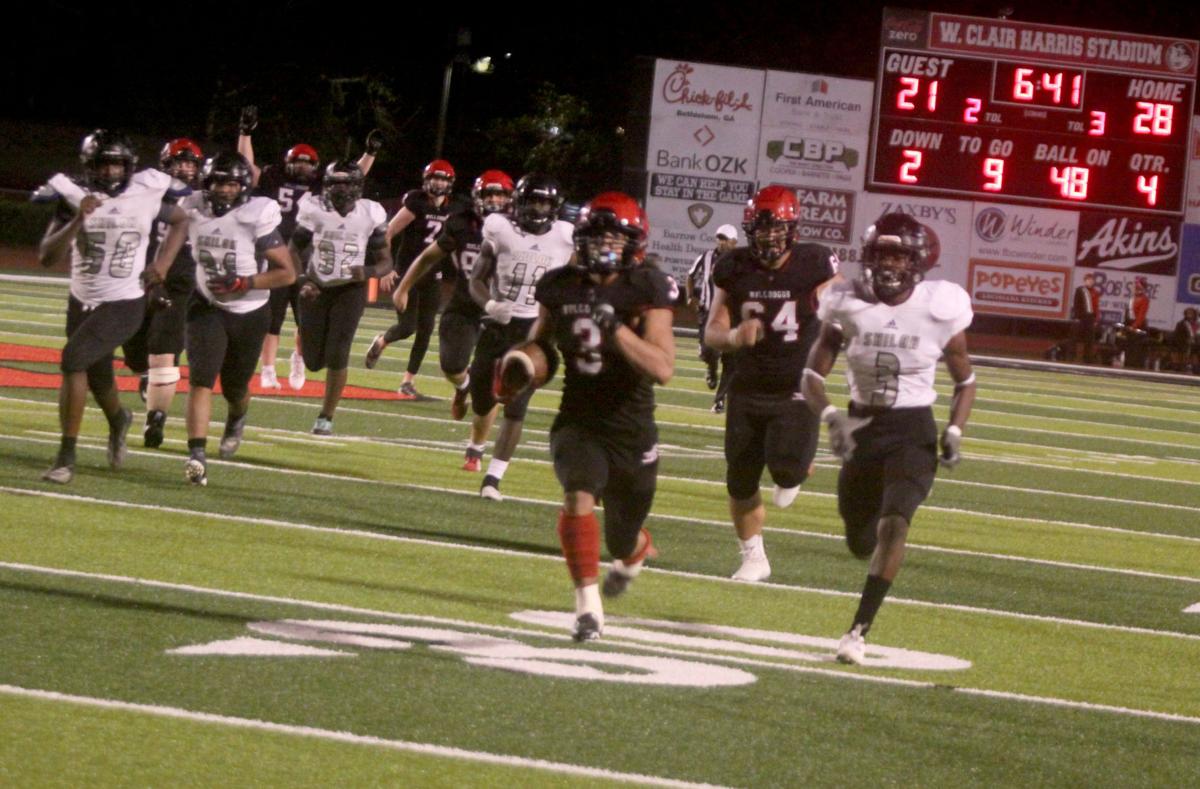 Winder-Barrow's Caiden Carruth breaks away for a 52-yard touchdown run in the fourth quarter of Friday's game. 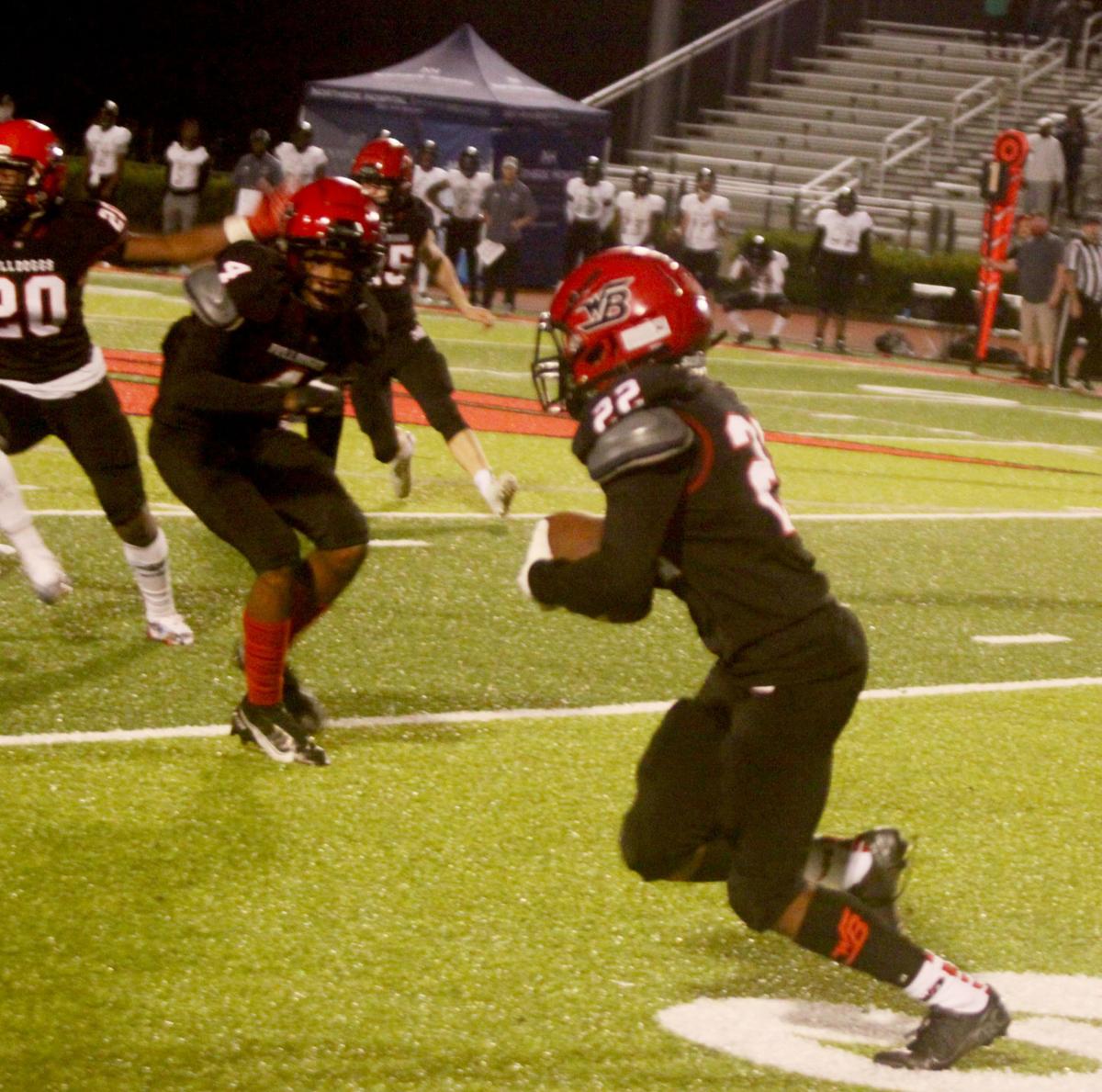 Winder-Barrow's Omarious Smith comes up with an interception with 18 seconds left in the game to seal the victory for the Bulldoggs.

Winder-Barrow receiver Tre Gaudlock picks up yardage during the first half of Friday's game.

Sophomore running back Aidan Thompson ran for 165 yards on 17 carries and scored three touchdowns for the Bulldoggs.

Winder-Barrow linebacker Chandler Maxwell (8) comes up with a big defensive stop against Shiloh.

Winder-Barrow's Caiden Carruth breaks away for a 52-yard touchdown run in the fourth quarter of Friday's game.

Winder-Barrow's Omarious Smith comes up with an interception with 18 seconds left in the game to seal the victory for the Bulldoggs.

Winder-Barrow head coach Ed Dudley may not have had any hair to pull from his head Friday night, Oct. 23, in a tight and critical game with Shiloh at W. Clair Harris Stadium. But as the final horn sounded, he could breathe easily — knowing the night belonged to the Bulldoggs and him in more ways than one.

Omarious Smith intercepted an Antonio Meeks pass with 18 seconds left, and the Bulldoggs held on 35-28, picking up a key GHSA Region 8-AAAAAA win over the Generals and giving Dudley his 200th career victory. As the realization hit along the sideline, Dudley’s son, players and assistants embraced him, and the veteran coach — intensely focused until the final snap — cracked a big smile.

Dudley, in his third season at Winder-Barrow and 27th overall, became the 62nd coach in Georgia high school football history to reach 200 wins and improved to 200-106 overall between five programs in a head coaching career that dates back to 1992 with Buford.

“It’s a statement toward longevity more than anything else — stubbornness and longevity,” the often dry-witted Dudley quipped.

With the win, the Bulldoggs (2-4, 1-2 region) snapped a four-game skid, but more importantly the victory kept them within striking distance of a state playoff berth later on in the season. And it took a handful of key performances on a short-handed offensive unit to get it done. With senior running back and leading rusher J.C. Green still ailing from an ankle injury he suffered the previous week at Dacula and limited to one carry before he had to exit the game, sophomore Aidan Thompson and junior Caiden Carruth both put together breakout performances to pick up the slack. Thompson rushed for 163 yards on 17 carries and three touchdowns and had a big fumble recovery early in the fourth quarter that set up a go-ahead touchdown for the Bulldoggs. And not to be outdone by too much, Carruth toted the ball 15 times for 125 yards and scampered 52 yards for a touchdown that put the Bulldoggs up 35-21 with 6:33 to go.

And then there was quarterback Conyer Smith, in for the injured Trevor Summerfield and making his first career varsity start. The 6-foot-5 sophomore, who saw extensive action at Dacula after Summerfield bruised his shoulder, was unfazed by the moment, completing 12 of 16 passes for 166 yards and the go-ahead 33-yard touchdown toss on third-and-13 over the middle to Stewart Allen with just over nine minutes left in the game. Faced later in the quarter with another third-and-long situation deep in Winder-Barrow territory and clinging to a 35-28 lead with less than two minutes left, Smith came up with another clutch throw, hitting Allen in tight coverage down the left sideline for a 28-yard gain that flipped field position and gave the Bulldoggs some much-needed breathing room.

“Being a couple guys down, all we talked about was playing and staying together as a team, so I was super-excited to see them do that,” Dudley said. “Those two backs played great and Conyer stepped into a tough situation and came up with a great performance. He’s really cool under pressure and just played extremely well for us tonight and kept the offense together.”

All-in-all, the 473 total yards added up to the Bulldoggs’ most complete offensive outing of the night. The only real blemish came at the end of the first half when the Bulldoggs had a second-and-goal from inside the Generals’ 1-yard line and were poised to take the lead but couldn’t find the end zone in three snaps.

While that might have spelled trouble in previous games, the Bulldoggs weren’t going to be denied Friday night in a contest that went back-and-forth, but in which they never trailed.

After taking the second-half kickoff, the Bulldoggs needed just six plays to cover 66 yards and regain the lead. Thompson did the heavy lifting as he ripped off a 33-yard run down to the Generals’ 15 and then plowed in from 4 yards away two plays later to make it 21-14 with 9:55 left in the third quarter.

Shiloh (3-3, 1-1) would go on to tie the game just under four minutes later with a nine-play, 81-yard march, capped by Dion McDowell’s 41-yard touchdown run. But Thompson’s monumental fumble recovery after back-to-back three-and-outs woke the Bulldoggs’ offense back up. And Omarious Smith, whose pass interference penalty led to a 4-yard touchdown run by Antonio Meeks that got the Generals back within a score with 3:16 left, redeemed himself at the end with the game-winner.

“They just keep battling back, and I could not be prouder of this group,” said Dudley, who was asked if the win could help spur a strong run in the second half of the season, which continues Friday, Oct. 30, with another region battle at Central Gwinnett in Lawrenceville.

“I really do,” Dudley said. “I feel like that gets the stink off of us a little bit. And we’re definitely looking forward to more success down the line.”

But for a night at least, he could celebrate a well-earned milestone.

“I’ve had a long and wonderful career, and tonight’s win by this team in this situation is as good as any of them,” Dudley said. “I will remember this one for a good, long time.”