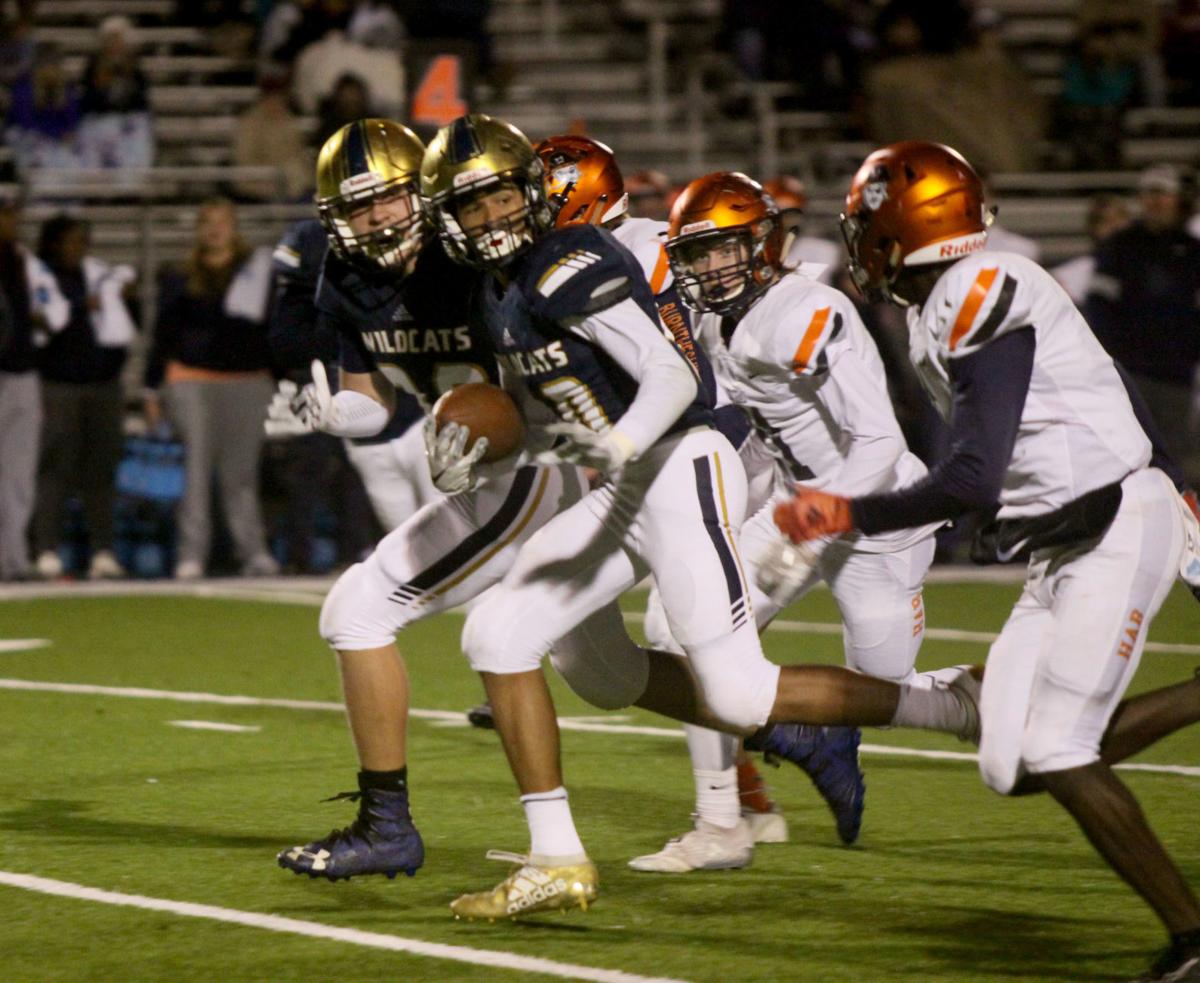 Apalachee senior running back Shaan Cook had 256 rushing yards and four touchdowns to go along with a receiving touchdown as the Wildcats defeated Habersham Central 56-49 in their season finale Friday, Nov. 8. 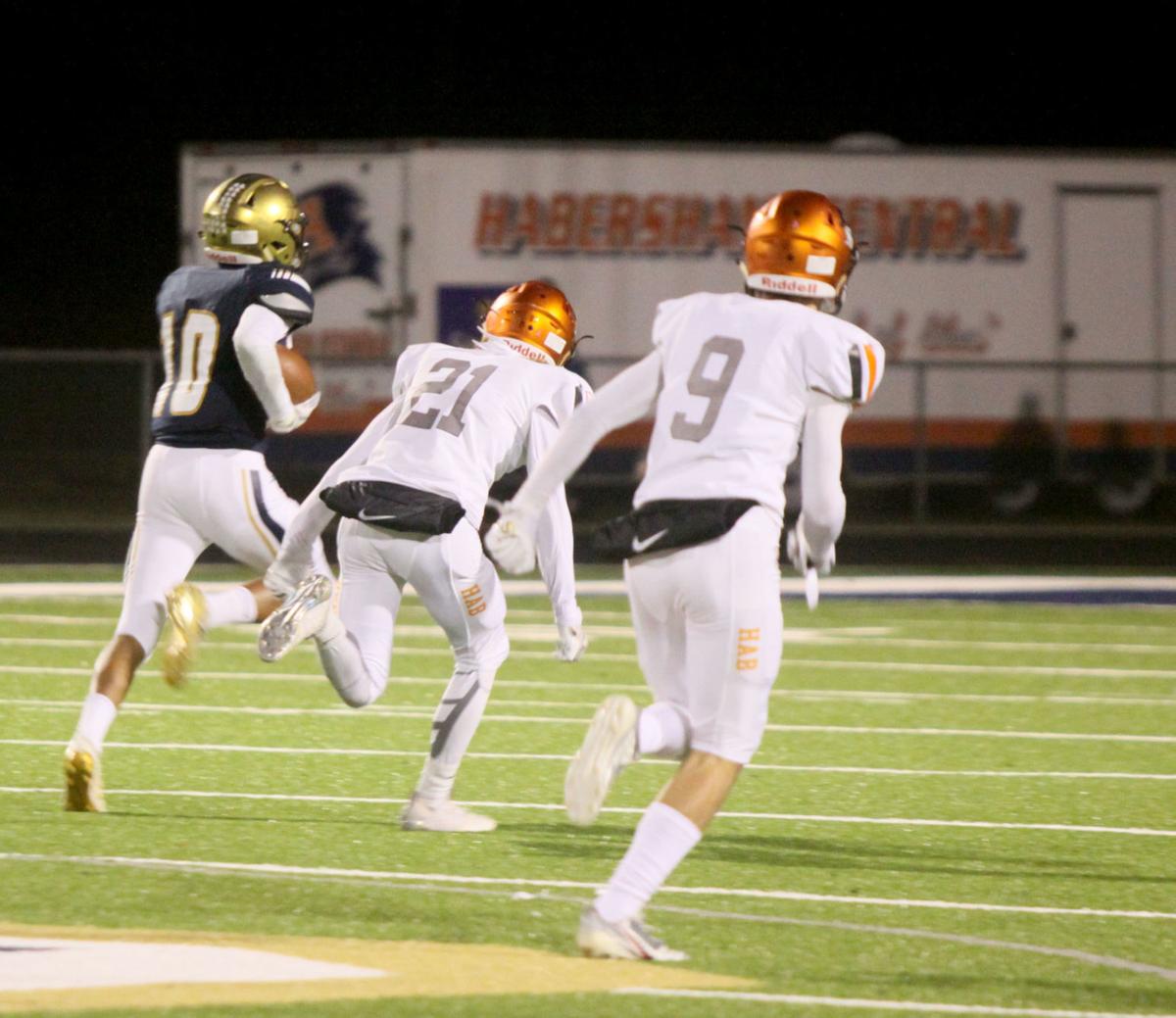 Apalachee's Shaan Cook scores on a 67-yard touchdown run on the first play from scrimmage for the night. 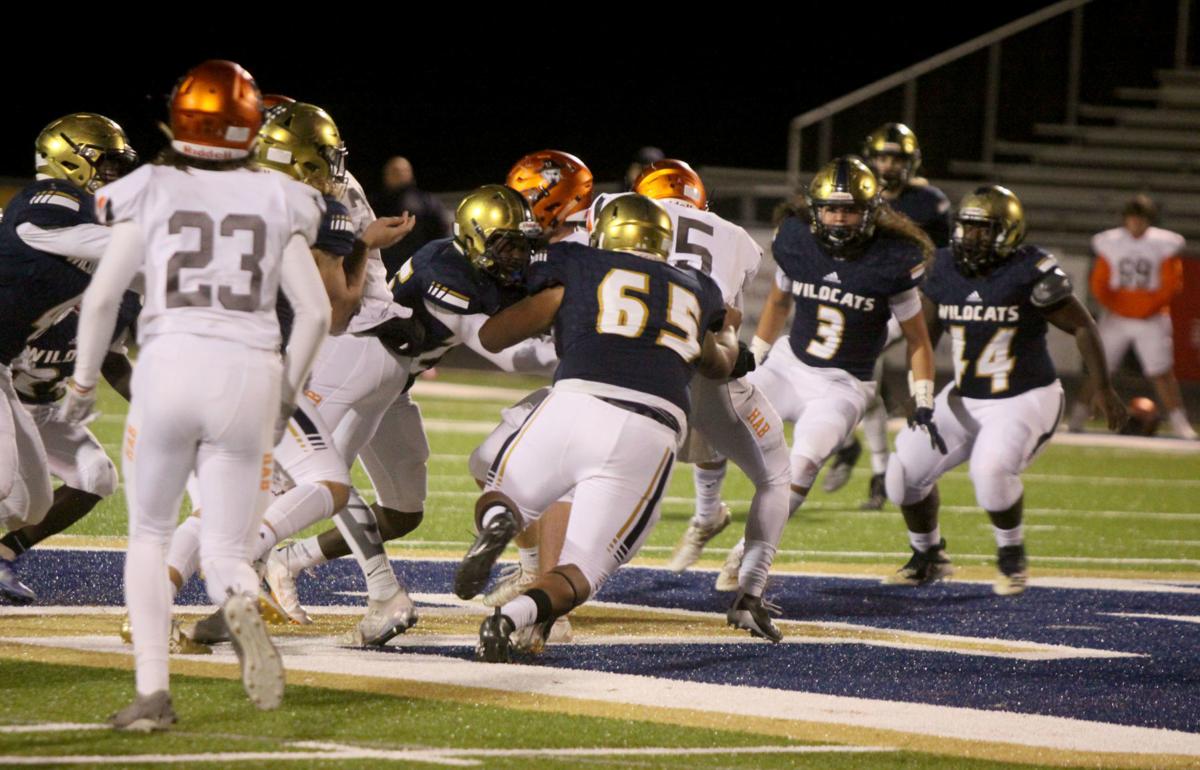 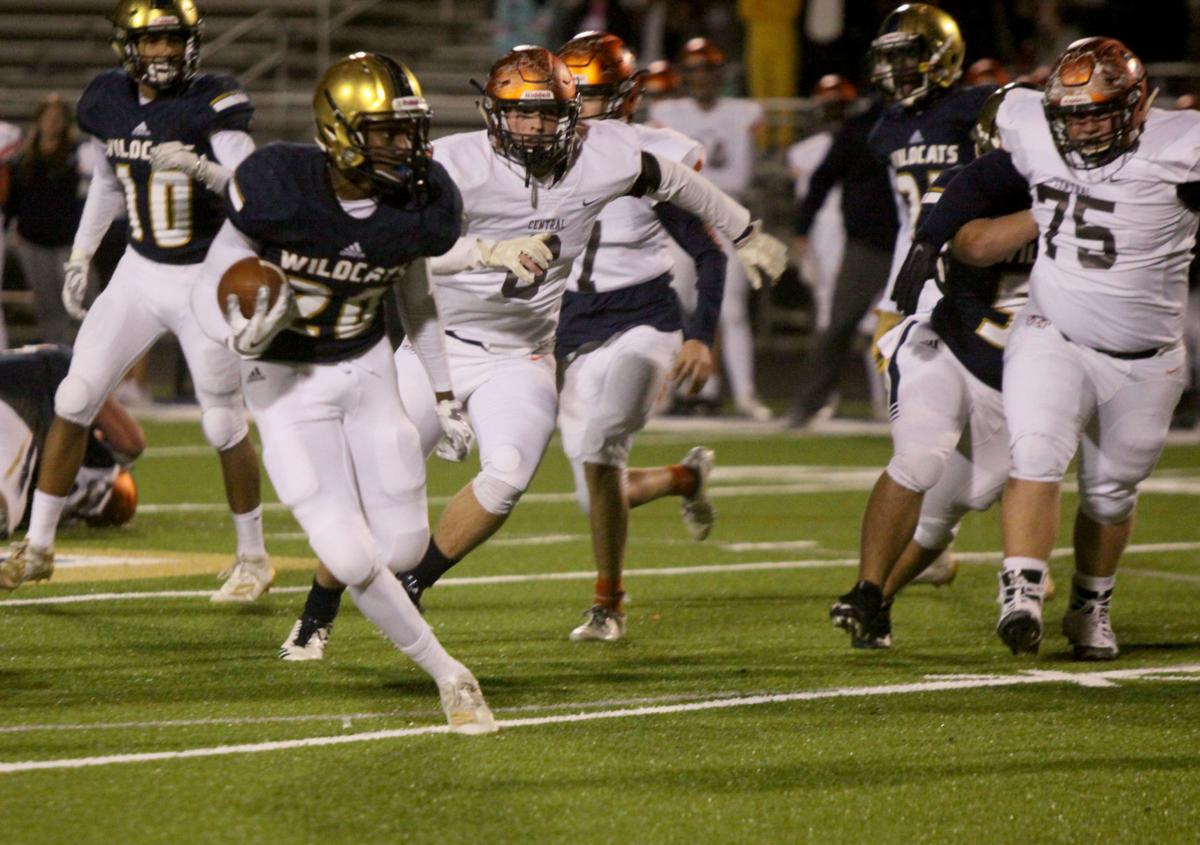 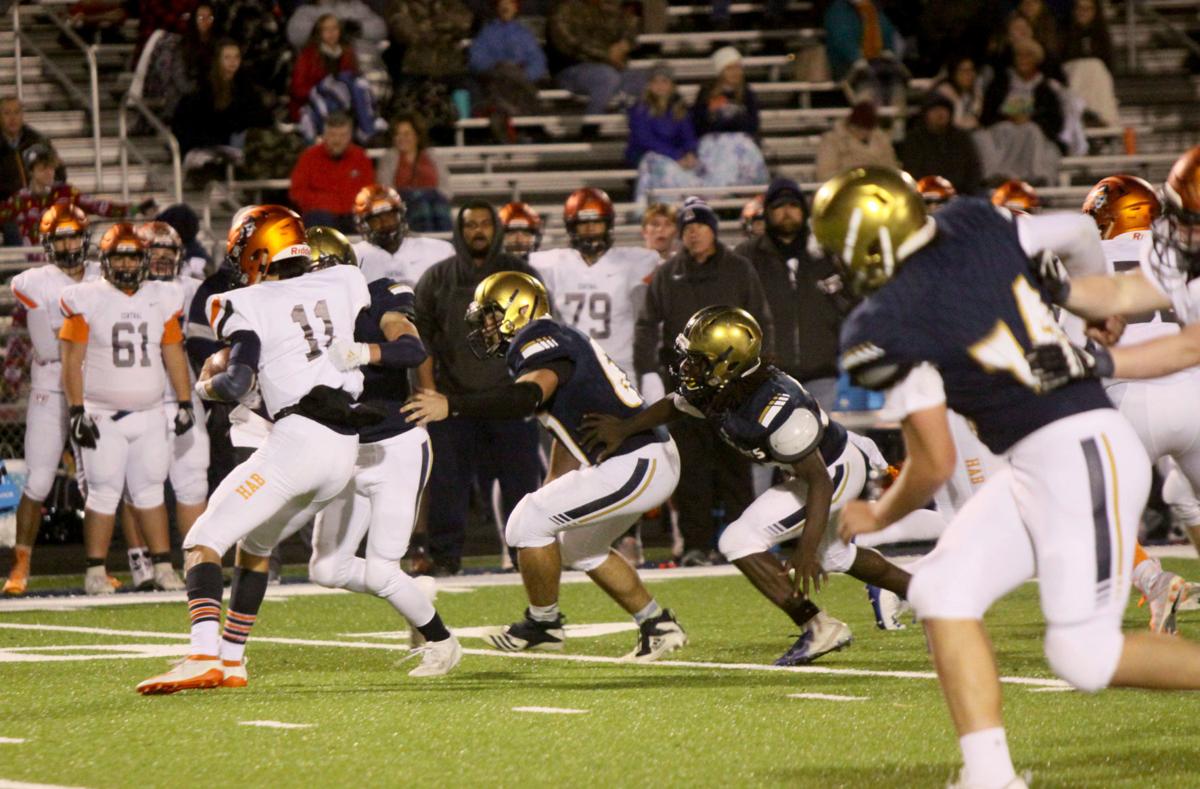 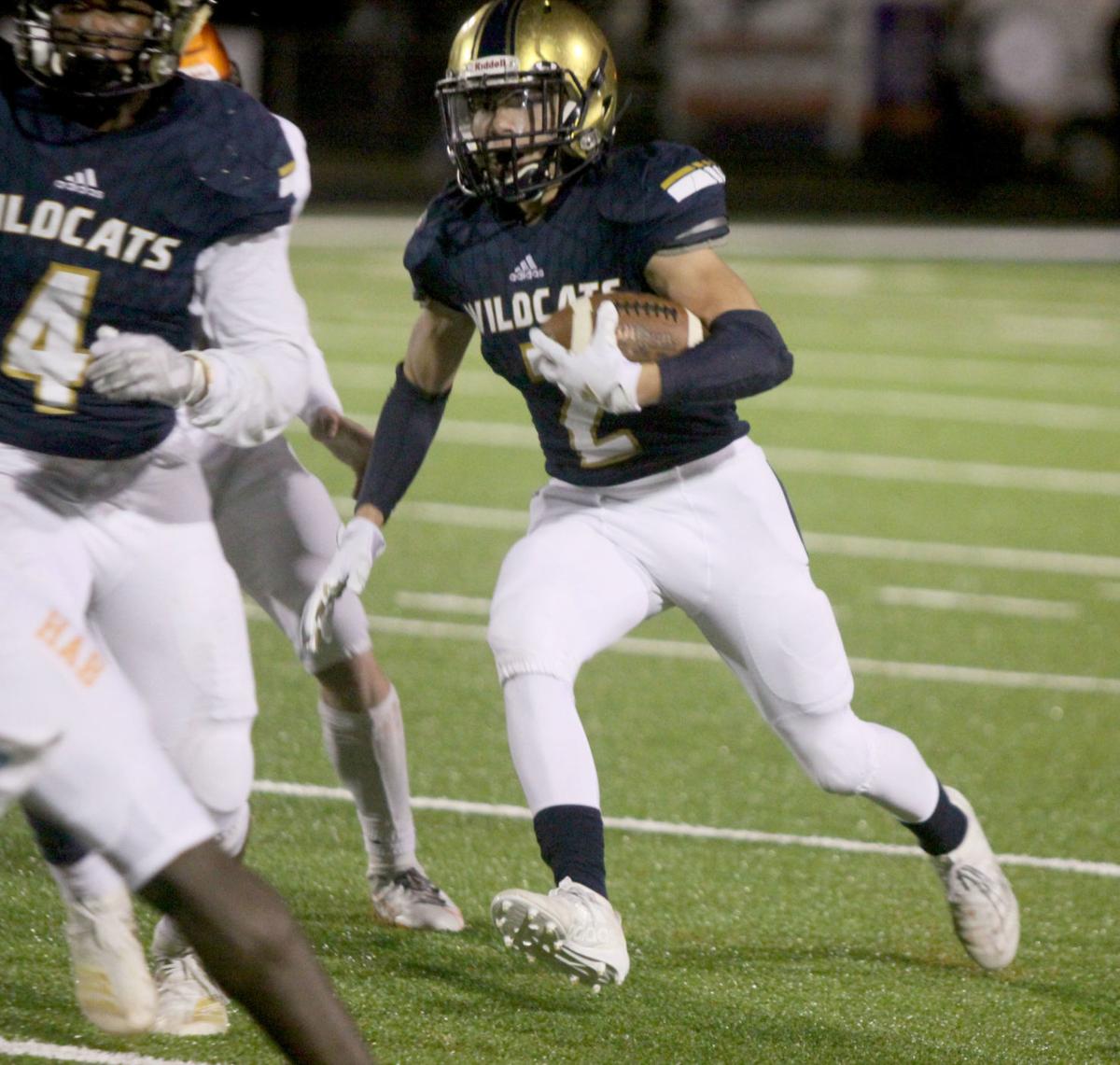 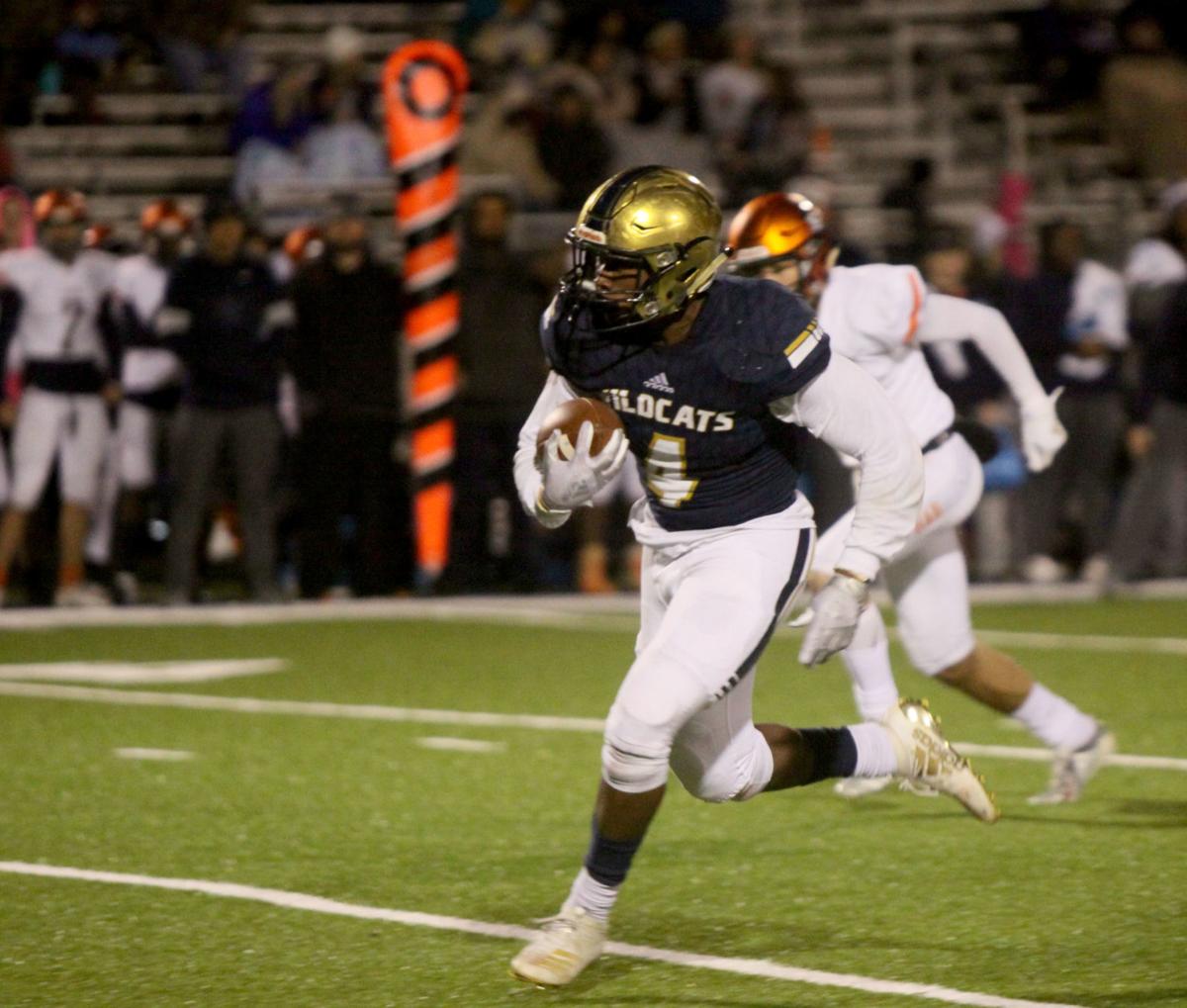 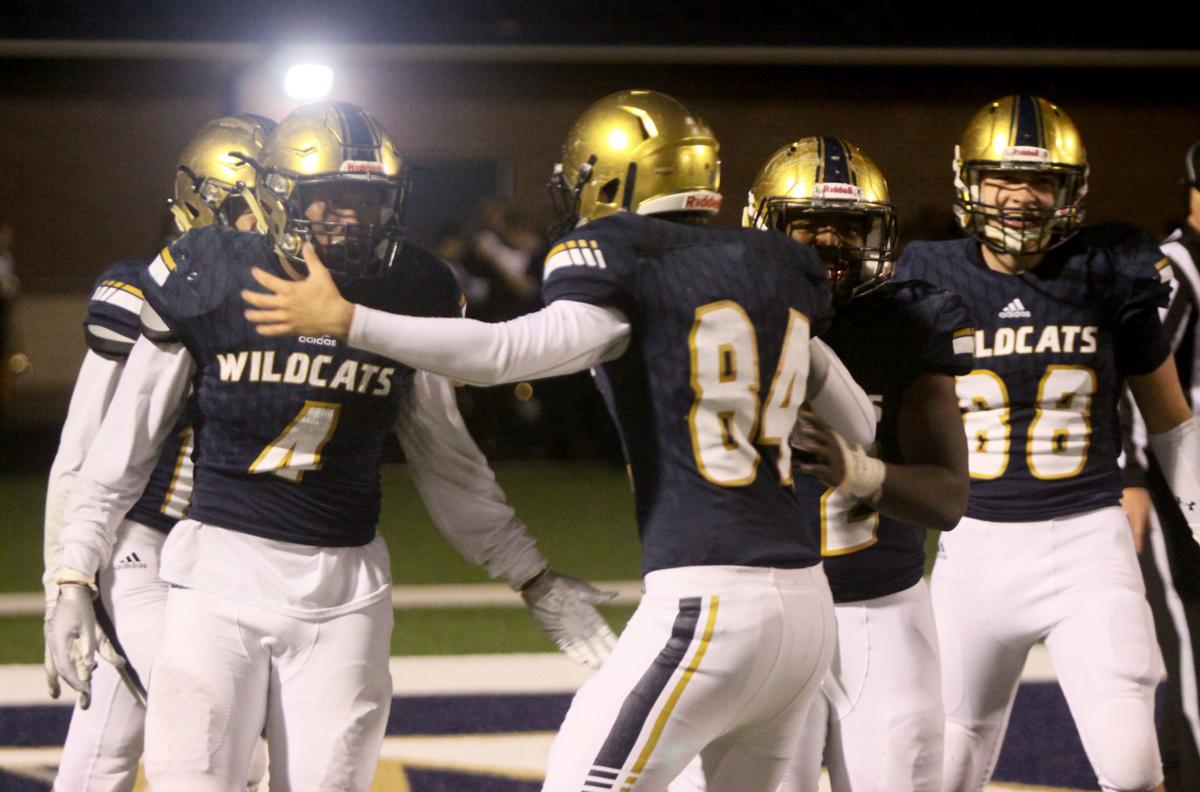 Apalachee's Tyrik Sims (4) is congratulated by Ethan Offutt (84) after a 41-yard touchdown run. 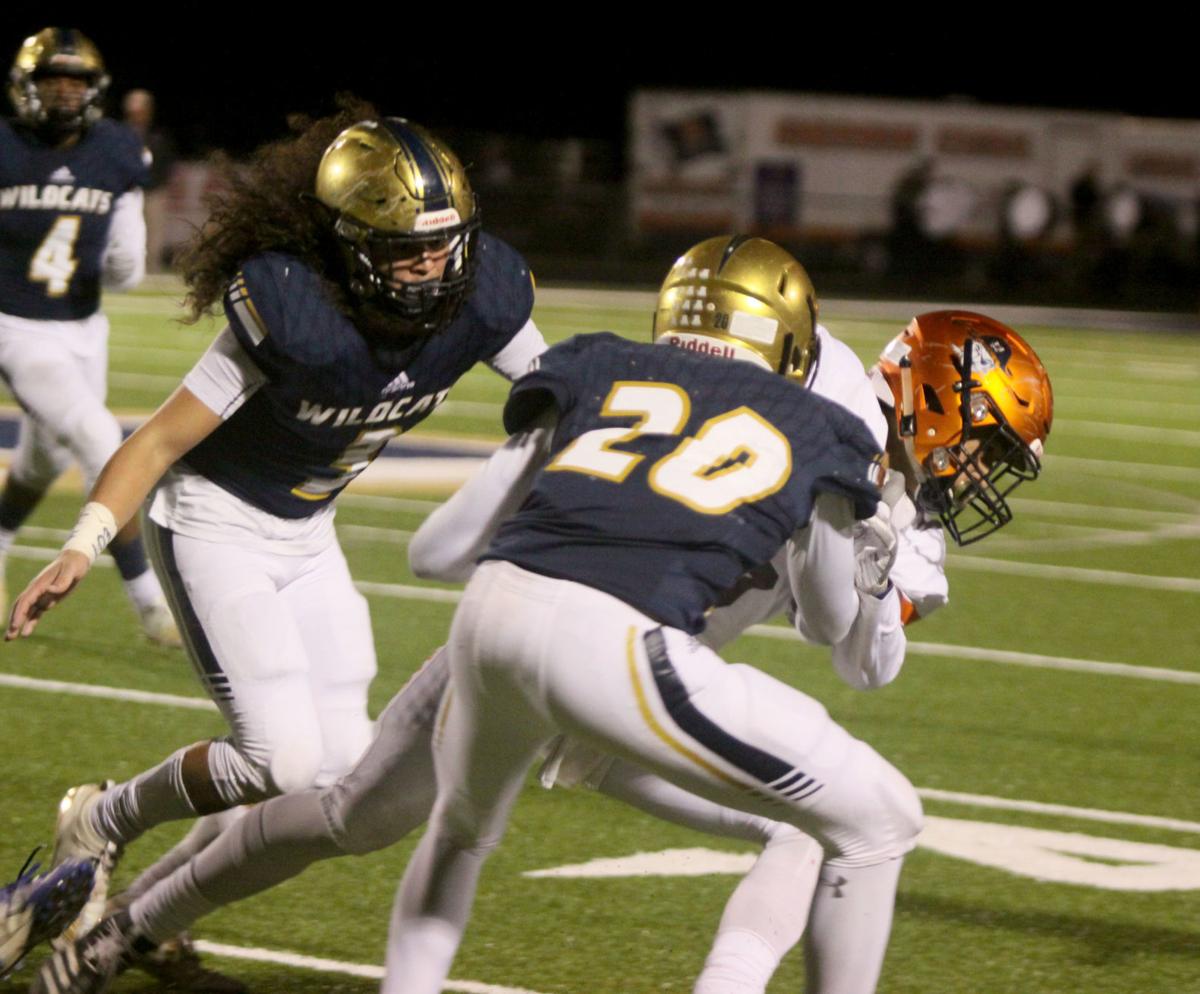 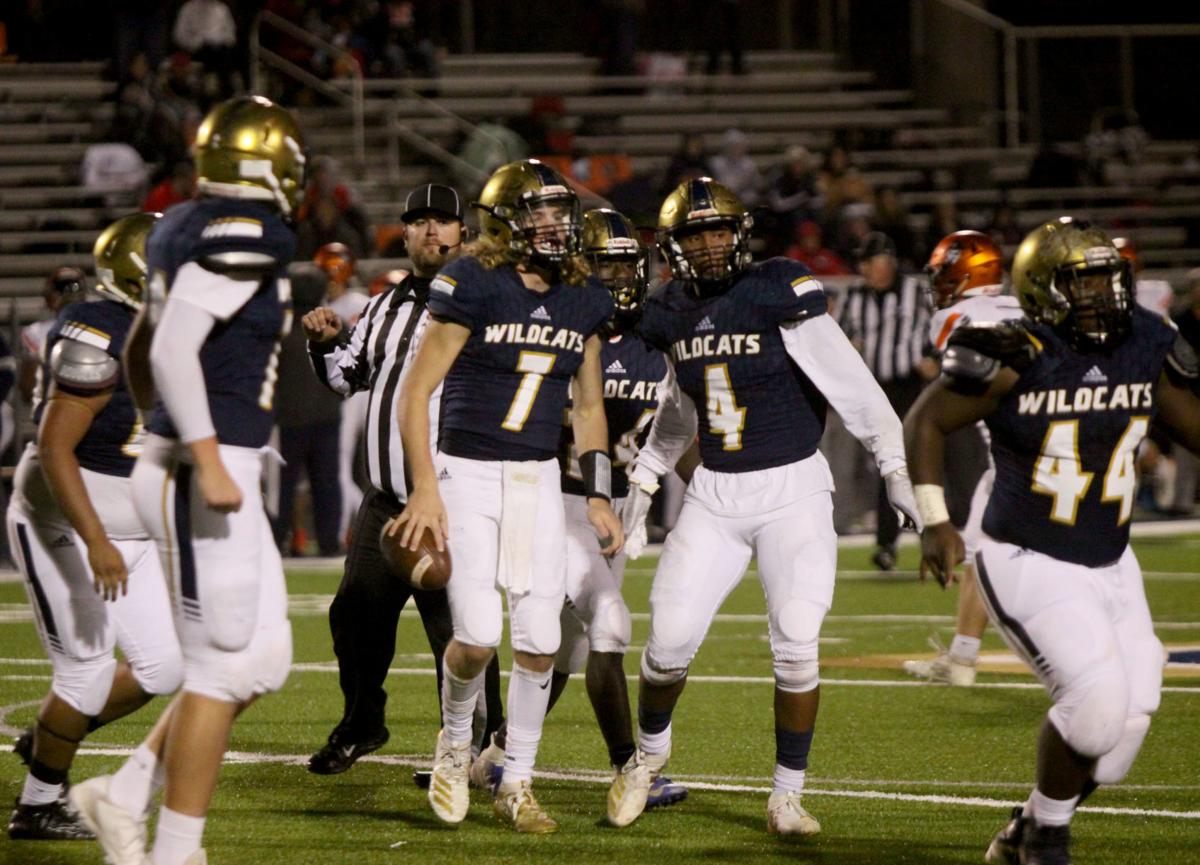 Apalachee's AJ Forbing (7) comes up with an interception against Habersham Central in the second quarter Friday, Nov. 8. 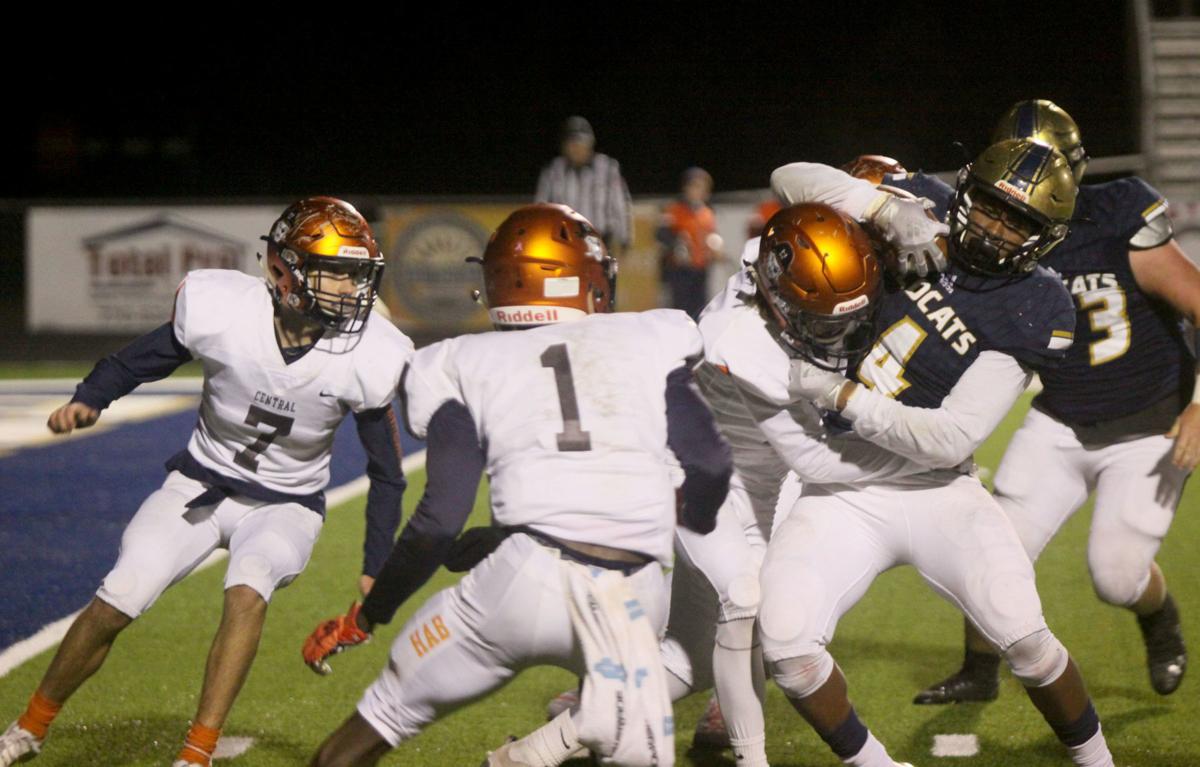 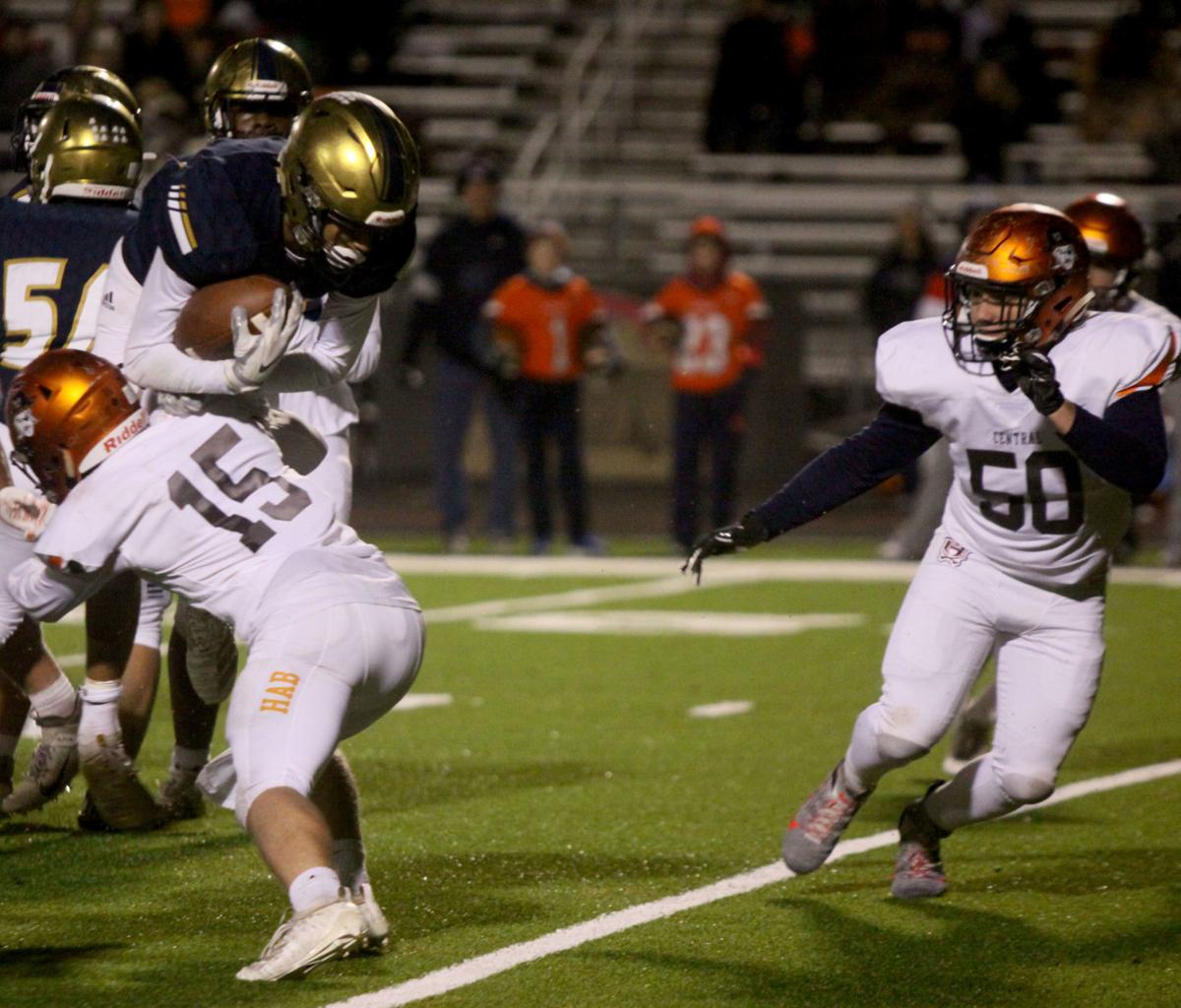 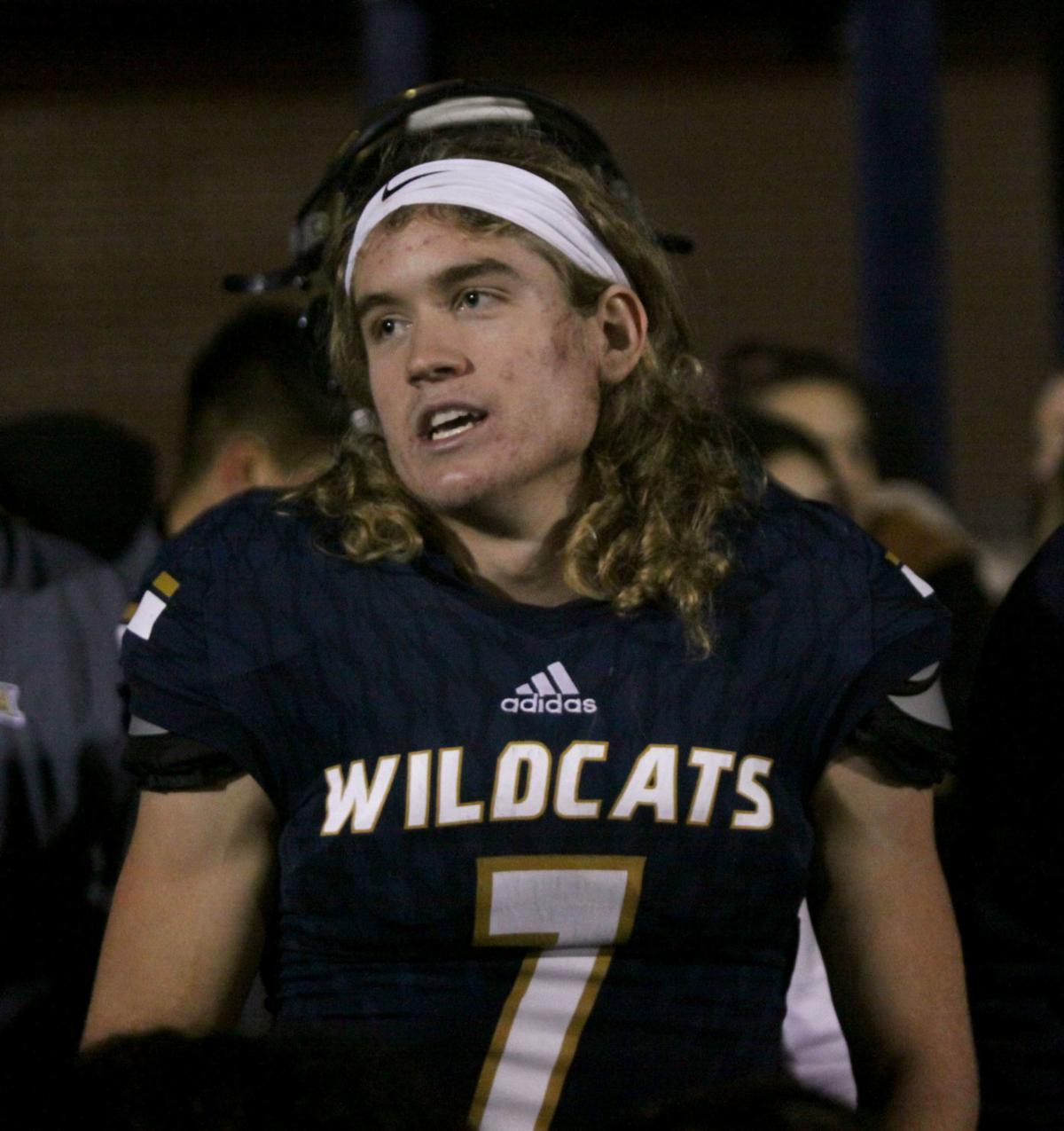 Apalachee senior running back Shaan Cook had 256 rushing yards and four touchdowns to go along with a receiving touchdown as the Wildcats defeated Habersham Central 56-49 in their season finale Friday, Nov. 8.

Apalachee's Shaan Cook scores on a 67-yard touchdown run on the first play from scrimmage for the night.

Apalachee's Tyrik Sims (4) is congratulated by Ethan Offutt (84) after a 41-yard touchdown run.

Apalachee's AJ Forbing (7) comes up with an interception against Habersham Central in the second quarter Friday, Nov. 8.

With his team’s postseason hopes gone, Apalachee coach Tony Lotti wanted the Wildcats to treat their season finale at home against Habersham Central on Friday, Nov. 8, like a playoff game and give the senior class one last chance to ring the victory bell in the end zone.

And thanks to several big plays from those seniors, the Wildcats were able to do just that.

Senior running back Shaan Cook ran for three fourth-quarter touchdowns, including a go-ahead 91-yarder with 5:34 left to play, as Apalachee rallied past the Raiders in a 56-49 thriller at R. Harold Harrison Stadium. The win snapped a four-game losing streak for the Wildcats (3-7, 1-4 GHSA Region 8-AAAAAA), who avoided a last-place finish in the region standings. Habersham Central finished the year 3-7 and 0-5 in region play.

“It was up, down, back and forth and the kids just kept fighting,” Lotti said of the victory. “I’m really happy it ended this way for the seniors because it’s been a rough year with all the adversity we’ve had to battle through. We still made some mistakes…but the bottom line is the kids kept playing their tails off. And that’s all I can ask of them, just play as hard as you can for each other. And they’ve done that all year long.”

Cook’s go-ahead score was set up by a huge defensive play as fellow senior Tyrik Sims’ fumble recovery — his second of the night — at the Apalachee 4-yard line with 6:37 to go snuffed out a potential touchdown drive that could have put the Raiders up by two scores. Instead, the score remained 35-33 Habersham and the Wildcats didn’t take long to go out in front. After a 5-yard run by Sims, Cook took a handoff around the right side and raced down the sideline untouched, sending the Apalachee sideline into a frenzy. Sims scored a two-point conversion on the next snap to put the Wildcats up 41-35.

The Wildcats caught another break when Habersham fumbled a squib kick on the ensuing kickoff and Marcus Streeter fell on the loose ball at the Raider 15. They needed just three plays from there as Cook’s 13-yard run made it 48-35 with 3:53 left.

After Habersham cut the deficit to 48-42 on a 67-yard touchdown pass from Ryte Woodruff to Grayson Taylor with 3:14 on the clock, the Raiders attempted an onside kick. But the ball didn’t travel far enough, and Apalachee went right back to work with Cook carrying it in from 18 yards away to make it 56-42 with 1:36 to go.

“I knew we needed a boost so I just kept running and doing what I needed to do,” said Cook, who finished with 256 rushing yards on 15 carries and four touchdowns and added another score on a 7-yard pass from senior quarterback AJ Forbing in the third quarter.

Cook’s first touchdown came on a 67-yard run on the first play from scrimmage on the night, which gave Apalachee an early 6-0 lead.

“We were trying to play like we were in the playoffs, and it feels great to get this one,” Cook said. “We wanted to come out and win on our field one last time, and that’s what we did.”

The Raiders made one last-ditch effort to get back in the game with a quick 55-yard touchdown drive, capped by Woodruff’s 2-yard run with 37 seconds left. But another Apalachee senior, Tyson Wilson, finally sealed the deal when he corralled Patrick Tedder’s onside attempt, allowing Forbing to take a couple of knees and run out the clock.

Apalachee’s monster fourth quarter spoiled another monumental performance by Woodruff, Habersham’s senior quarterback. A week after finishing with over 300 total yards in a 41-40 loss to Winder-Barrow that eliminated the Raiders from the playoff hunt, Woodruff tallied 498 yards of offense and seven touchdowns Friday (297 passing yards and two touchdowns to go along with 201 rushing yards and five more scores) in his final high school game.

After Cook’s long run opened the scoring, Woodruff’s first two touchdown runs put Habersham up 14-6 and his 57-yard touchdown pass to Joshua Pickett made it 21-13 with 3:35 left in the first half. But Sims kept Apalachee in it with a pair of touchdown runs of 41 and 33 yards and the Wildcats trailed just 21-19 at the half.

Sims finished the night with 115 yards on nine carries and the two scores to go along with his pair of fumble recoveries. Forbing went 4-of-5 for 57 yards and two touchdowns — the 7-yarder to Cook and a 31-yarder to senior receiver Hayden Goss that cut the Raiders’ lead to 35-33 with 9:52 remaining in the game. He also had an interception on defense that set up Sims’ second touchdown run.

“Y’all are my freaking brothers!” Forbing shouted to his teammates at the end of his speech to the team as the Wildcats huddled with Lotti at the victory bell after the game. A couple of other quick speeches from the senior class followed before the team broke for the final time.

“In our pre-game meal, I told the senior parents that what I’m most proud of is how much I’ve seen these kids mature since I got here, in their leadership and their decision-making,” Lotti said. “And they’re really good kids. They really are and I’m just so proud of them. As a coach, you have to take stock in why you do what you do, and I love those kids. They’ve had a lot of adversity but they were able to ring that bell tonight.”