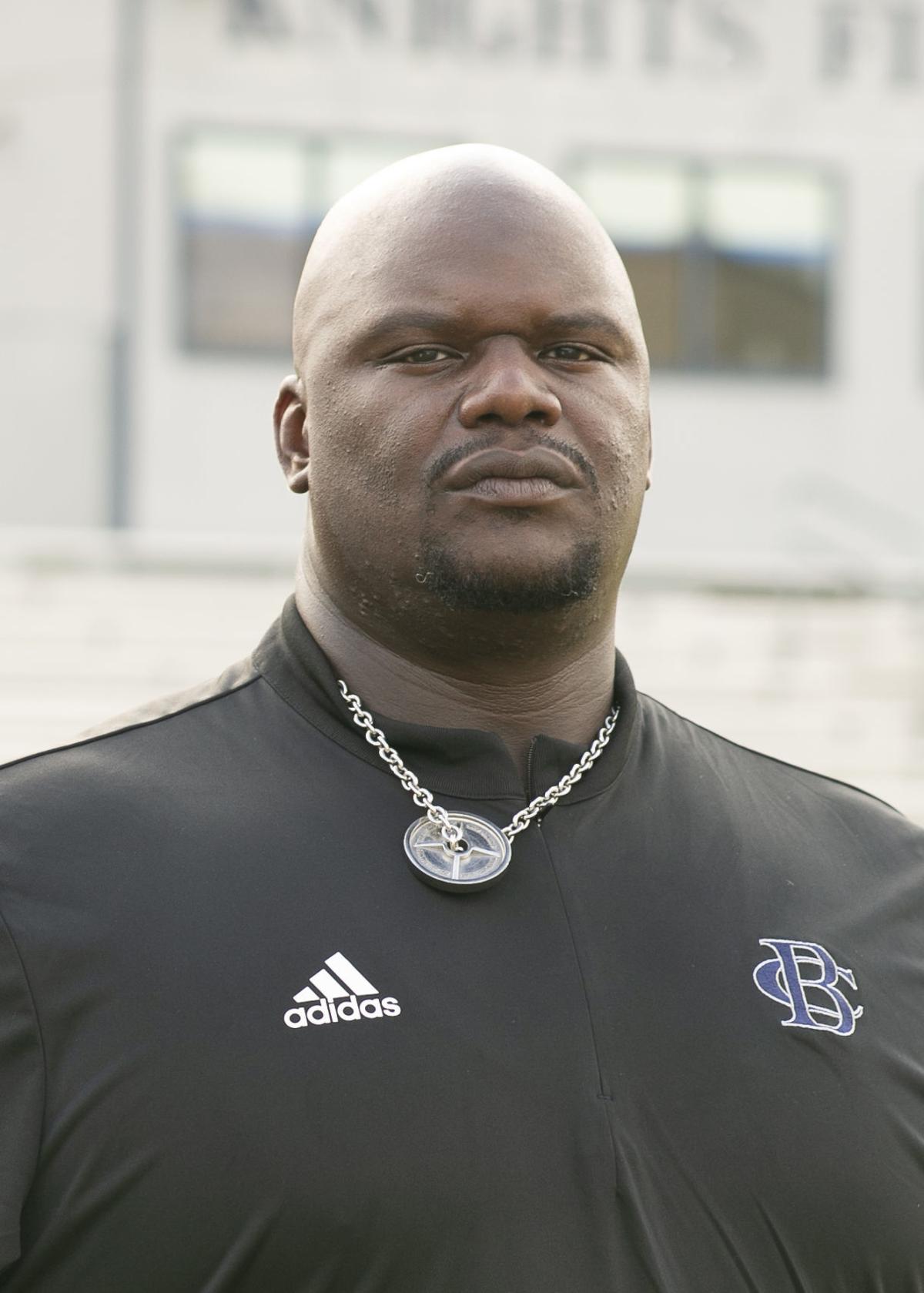 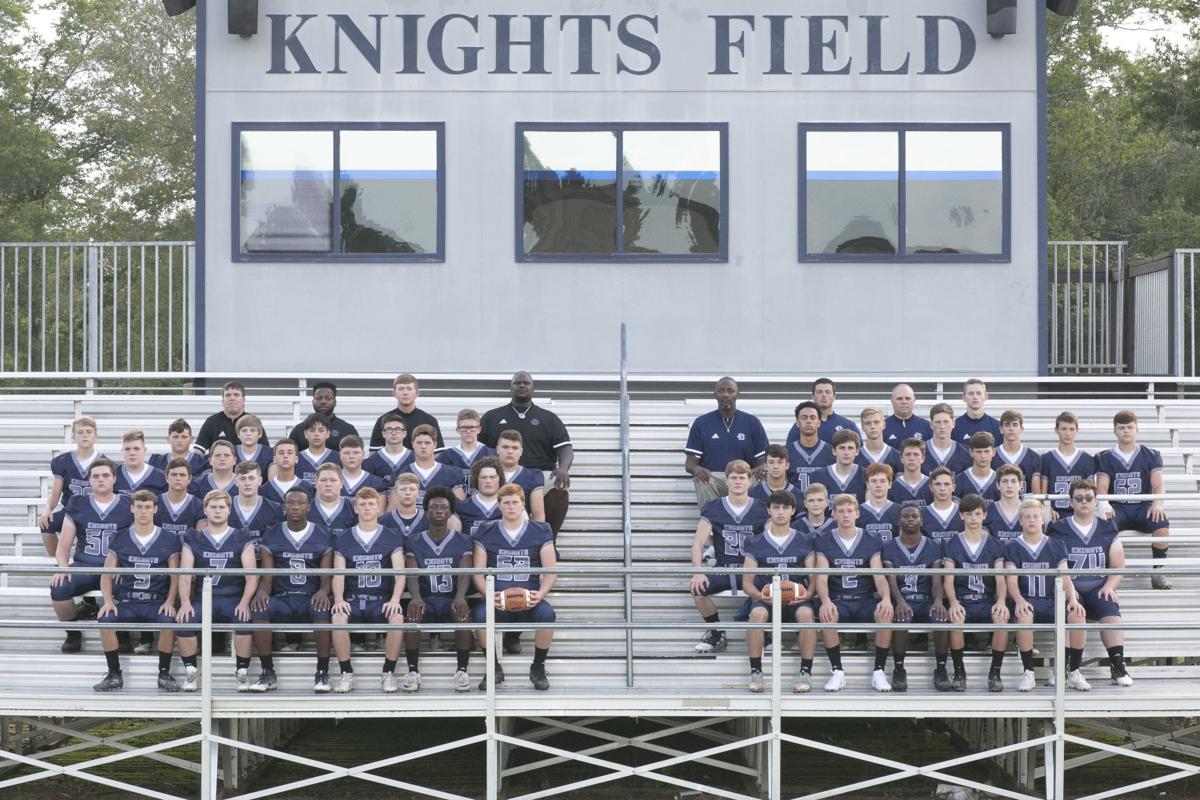 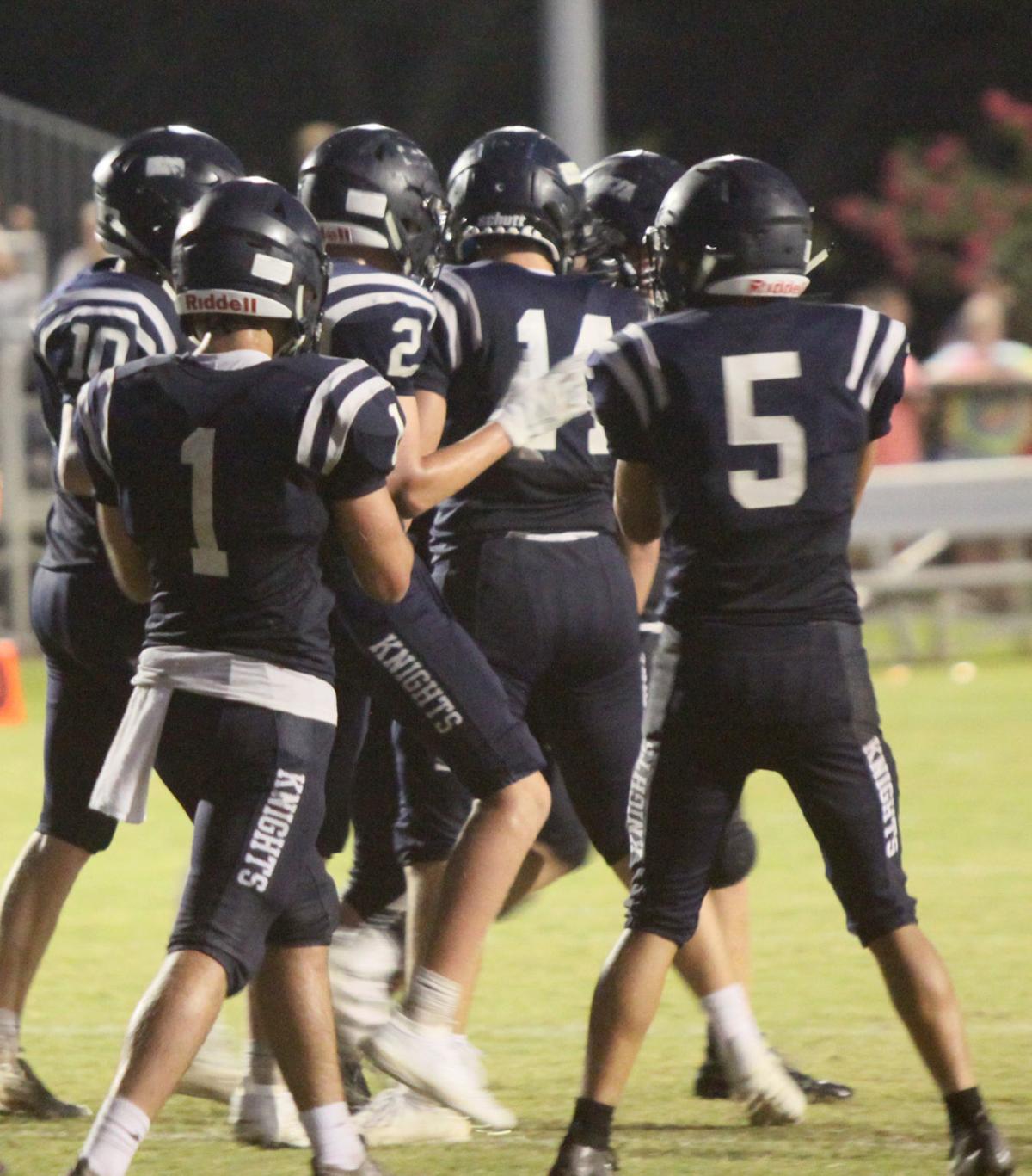 The BCA defense celebrates a stop at the goal line during a scrimmage against Providence Christian on Aug. 16. 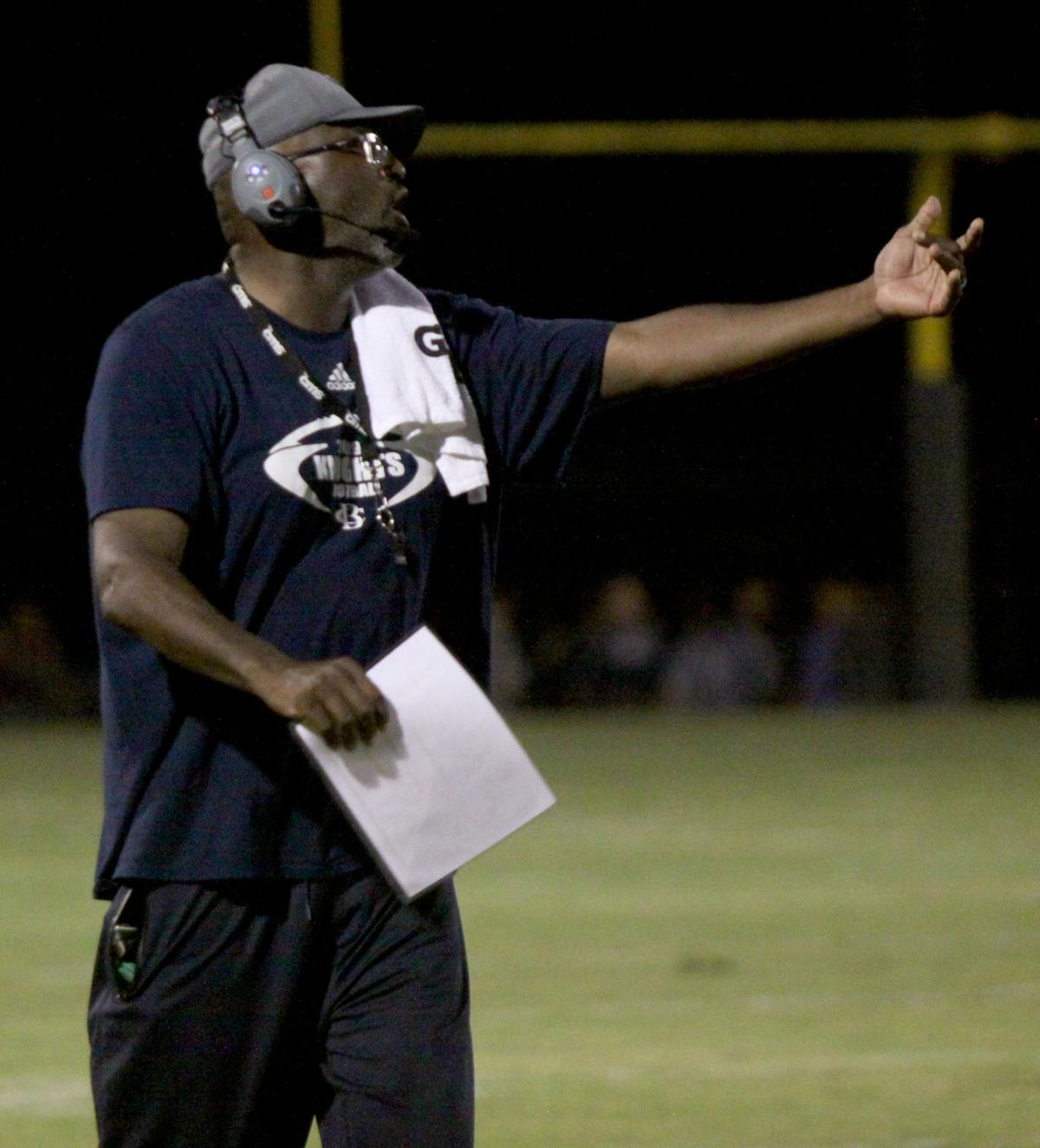 Rod Robinson, who is now the upper school principal at BCA, is also the team's offensive coordinator. He worked with head coach Gus Felder previously at a pair of Division II programs. 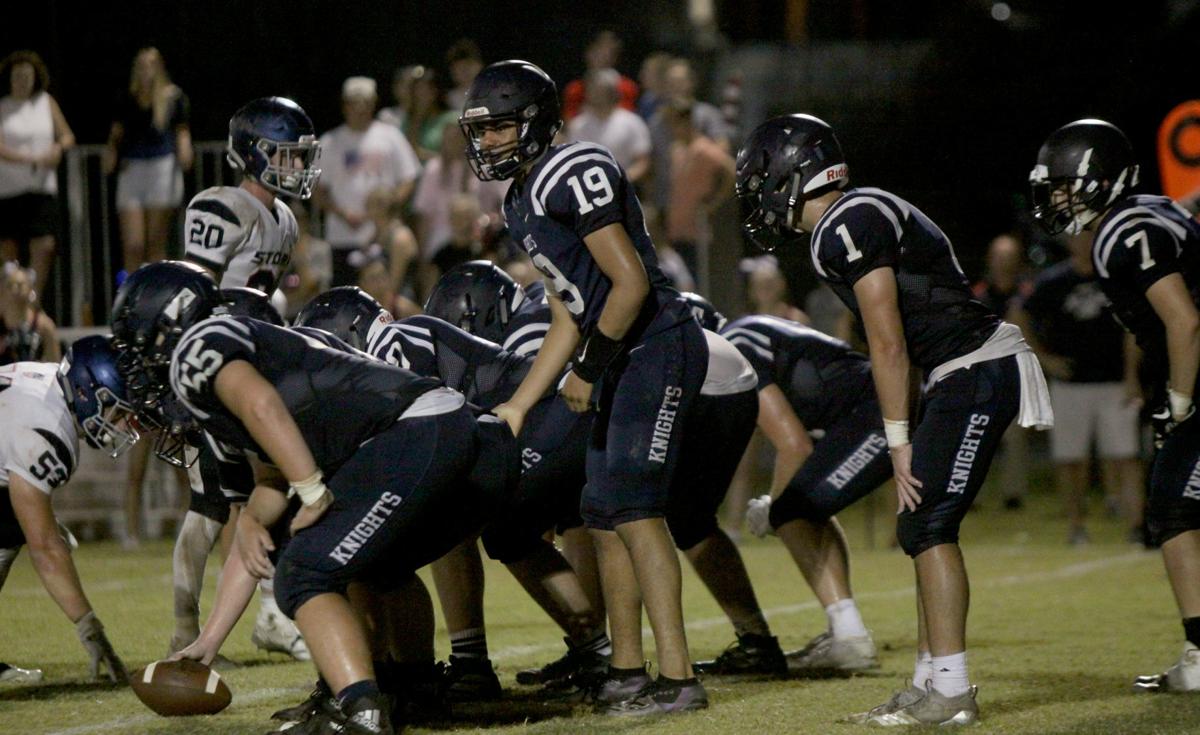 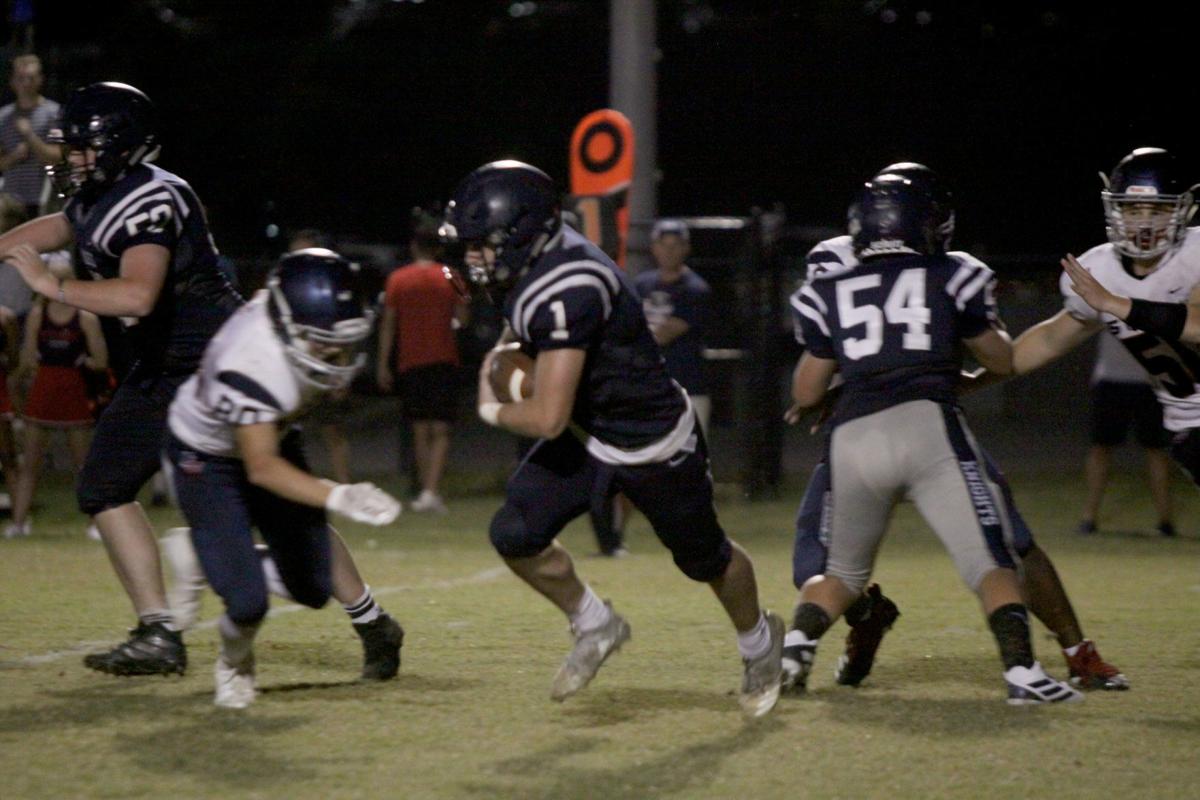 BCA junior Brice Schwebel is expected to shoulder the majority of carries in the Knights' backfield. 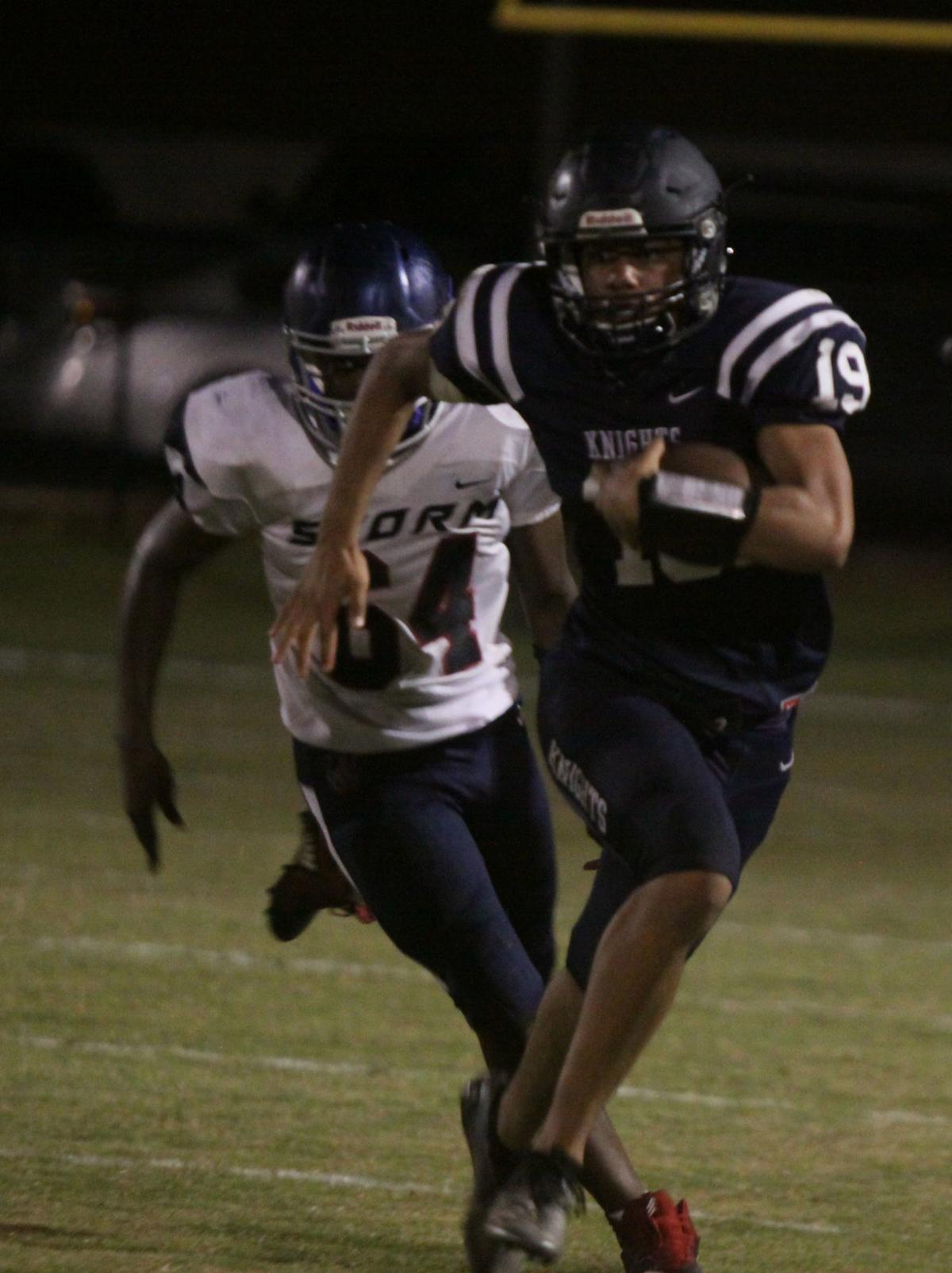 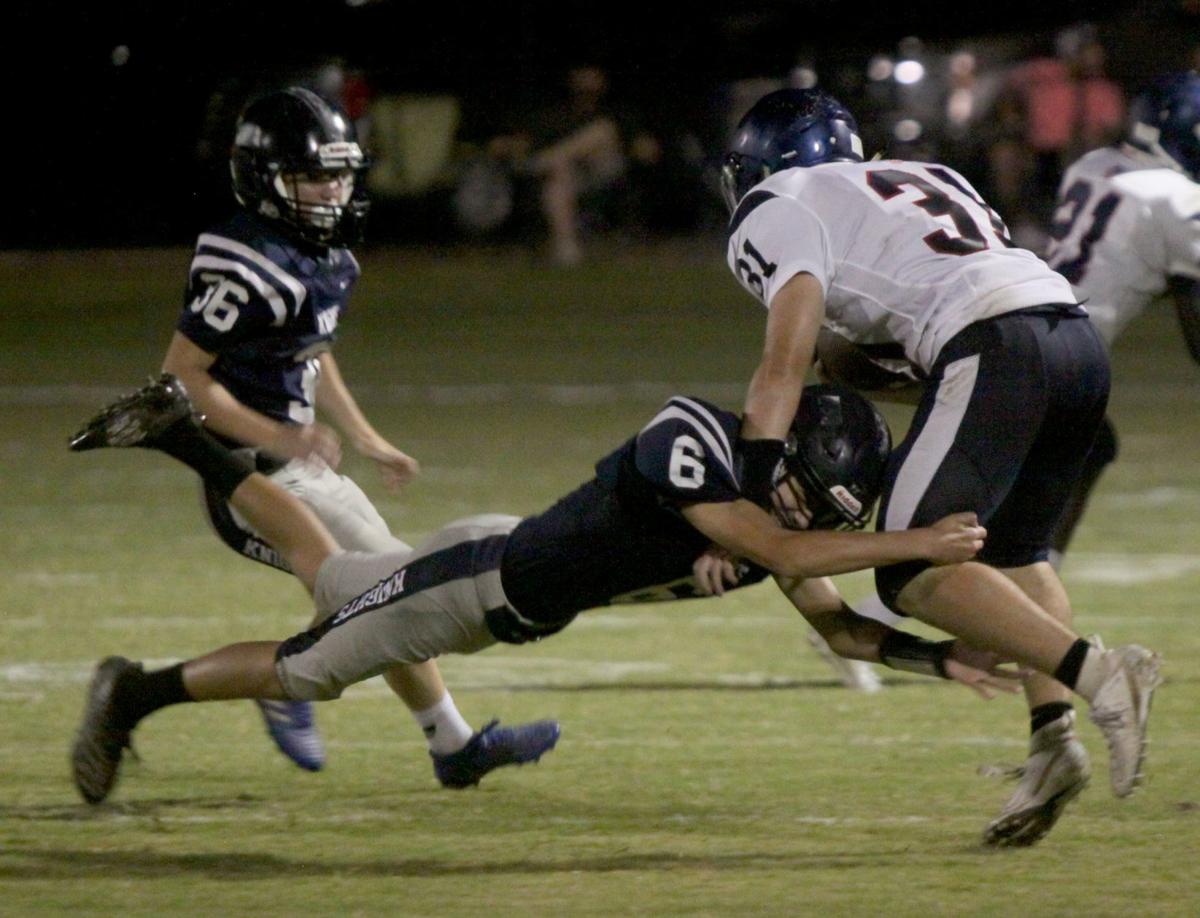 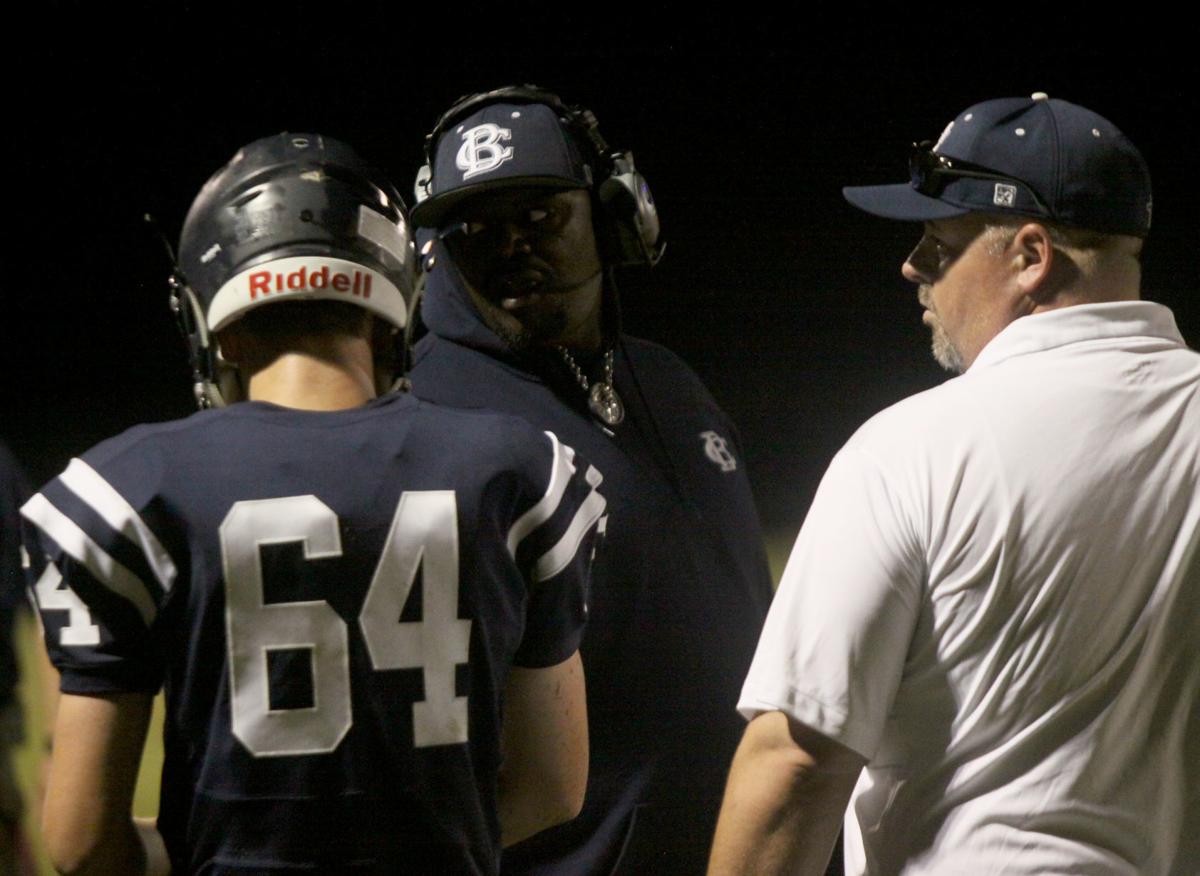 Gus Felder will be in first season as BCA's head coach. 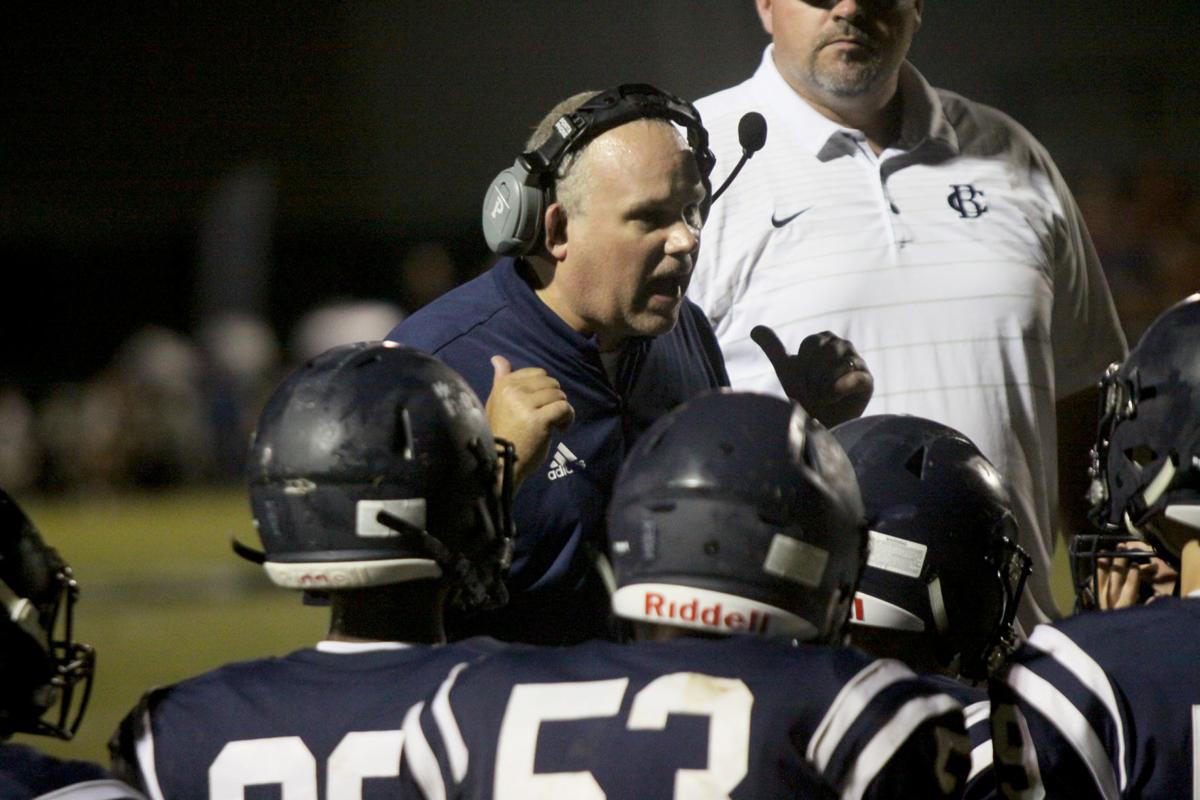 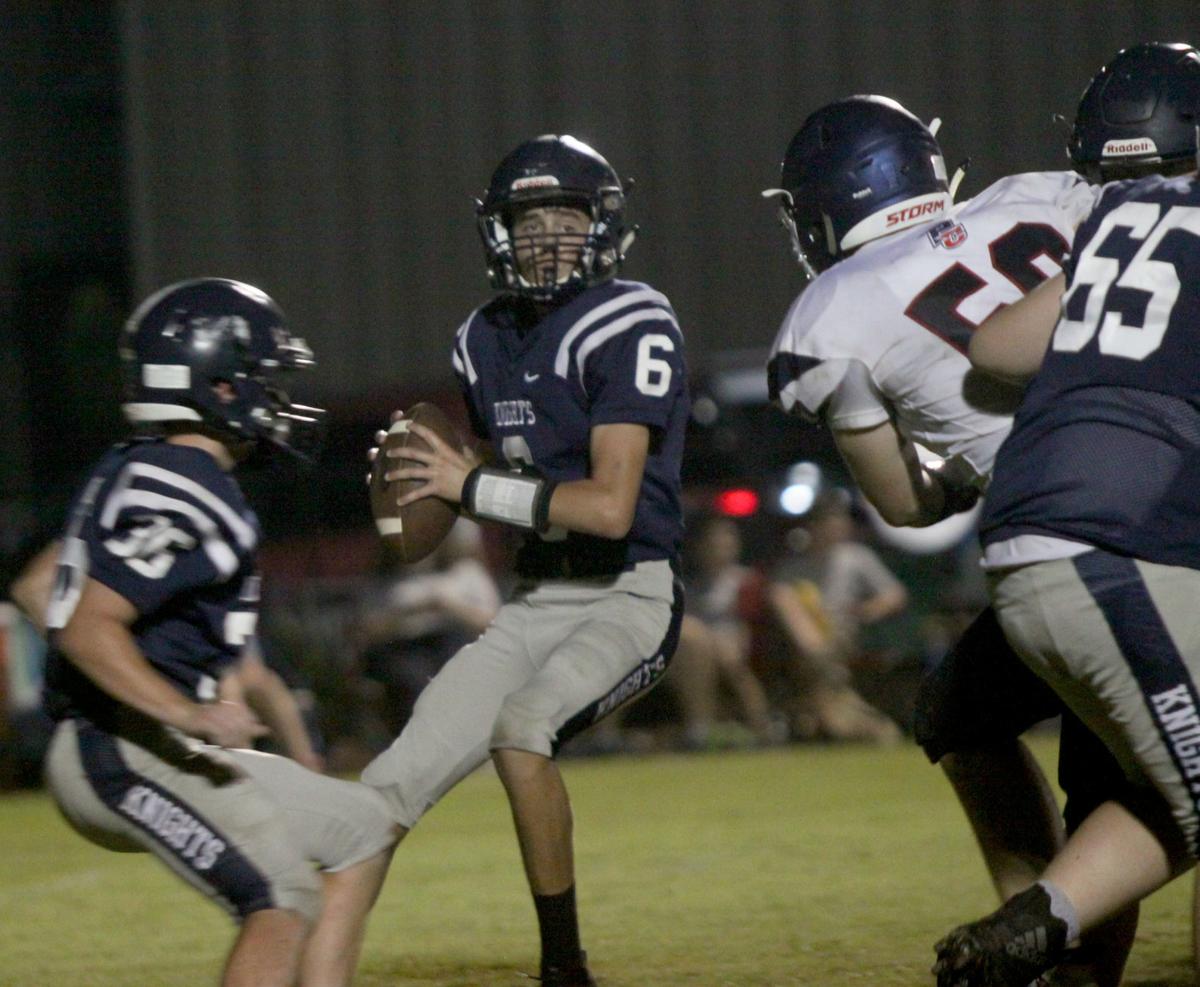 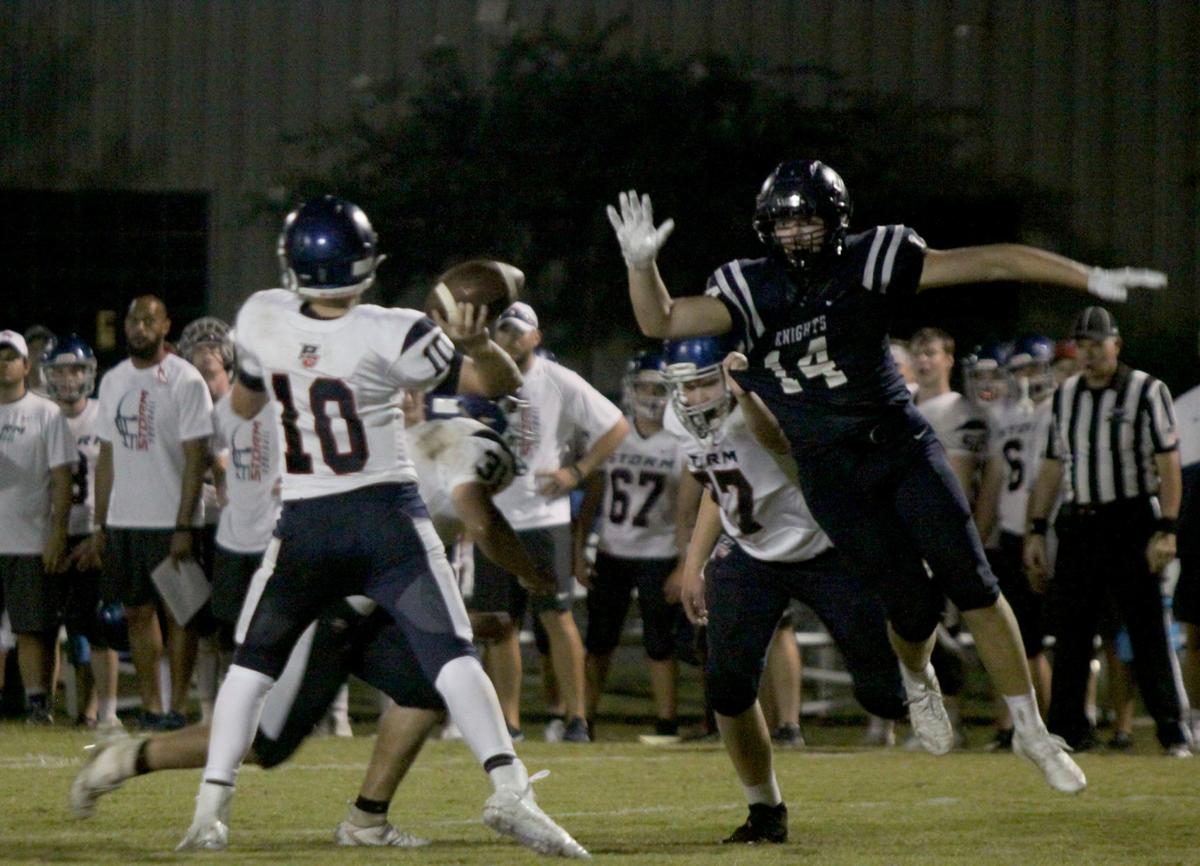 The BCA defense celebrates a stop at the goal line during a scrimmage against Providence Christian on Aug. 16.

Rod Robinson, who is now the upper school principal at BCA, is also the team's offensive coordinator. He worked with head coach Gus Felder previously at a pair of Division II programs.

BCA junior Brice Schwebel is expected to shoulder the majority of carries in the Knights' backfield.

Gus Felder will be in first season as BCA's head coach.

The preparation time for Gus Felder entering his first season as the head football coach at Bethlehem Christian Academy has been short, but productive as he seeks to build a winning culture around the program and the entire athletic department.

Following the dismissal in February of Lance Fendley as head coach and athletic director, the school made a huge splash in April, hiring Felder who spent the previous three seasons as the director of strength and conditioning at the University of Miami under his close friend Mark Richt, to both positions.

Felder was not retained after Richt retired and Manny Diaz took over the Hurricanes, and he briefly joined Georgia Tech’s strength and conditioning staff in January. But Felder said he felt a calling from the Lord to get back into high school coaching, and he’s been glad to be at his new home.

“I’m doing what I love to do,” Felder said. “I’m with my family more and getting to see some friends I haven’t seen and I’ve got some of my former players back working with me.

“We didn’t get a chance to have a full (offseason) together, but we’ve been doing a lot of team-building activities, finding out who’s tough and who can play. Every day is a stepping stone for us. Every day we’re growing. We’re teaching kids how to attack their role and learn about the culture we want to build here and understand that how they carry themselves on and off the field matters.”

Felder, a former two-time all-Big Ten offensive lineman at Penn State, spent a year with the Cleveland Browns and has about two decades of coaching experience in the high school and college ranks, including Penn State and two years as the assistant strength and conditioning director at Georgia before following Richt to Miami.

Since he was hired at BCA, Felder has hit the ground running and used an extensive network of connections to build his coaching staff. He brought in Rod Robinson, who he coached with at Division II programs Cheyney and Clarke Atlanta and who was also hired as BCA’s new upper school principal, to be his offensive coordinator and assistant head coach. Stev’on McGill, who was on Felder’s strength and conditioning staff at Miami, also joined the Knights, while newcomers Cody Lee, Rusty Watson and Eric Craft and returners Jason Stafford and Westly Cheeks are also on staff.

But the most significant hire might have been Jason Traylor, a former player at Florida who had been the head strength coach at Ohio State before deciding to join Felder as the Knights’ head of strength and conditioning.

“We’ve hit it hard with our strength and conditioning program and that’s something I take a lot of pride in,” Felder said. “That’s the most important part of a program. You’ve got to know, are they mentally and physically tough? Are they mentally and physically fit? You find that out in the weight room. Jason was the best fit for BCA. He would not have been hired at the places he’s worked if he wasn’t as good as he is, but he can relate to all student-athletes and get them to do things they might not have thought they could do.

“He’s doing a great job pushing them but also loving them up, and the kids have really responded.”

As for personnel, the Knights will be looking to improve on a tough 2018 campaign that saw them win their first two games, but drop their final eight and miss the playoffs for the first time since 2015. BCA was hit hard by graduations and a key transfer, but the Knights do have some returning experience on their 30-player roster, many of whom will have to play regularly on both sides of the ball due to numbers.

After seeing some time last year, junior Ethan Guthas will be the team’s starting quarterback. Senior Jacob Adams (no relation to the Jacob Adams who started at quarterback last year and graduated in May) could also factor in, but Felder said he will see a lot of time at receiver and various places around the field.

“He’s an outstanding athlete who God has blessed with tremendous ability,” Felder said of Adams, adding he has “a great willingness to learn and adapt.”

Despite the loss of Tanner Schwebel, one of the top running backs in GISA, to graduation, Felder is also encouraged by the potential of junior tailback Brice Schwebel (Tanner’s younger brother).

“We’re hoping he can develop into a premier player in the state of Georgia,” Felder said of Schwebel, who also will be used at times as a slot receiver. “He has all the talent we’d like; it’s just a matter of teaching him how to be the best he can be.”

Other key players include senior Zach Patterson, who will see time at tight end, fullback, defensive end and linebacker; sophomore Logan Garmon and junior Jerry Helton on the offensive and defensive lines; senior receiver/defensive back Eliel Saint-Louis; senior placekicker Maggie Mauck, and senior tight end/defensive end Laine Jean-Francois, with whom Felder said, “I wish I had another year.”

“Everybody will get better week after week,” Felder said. “There’s some talent here, but we have to develop it to where it needs to be. …Right now, I want to see who wants to play and see which 11 kids want to fight to get on the field. We’re developing our team now and we want to create that new culture of excellence.

“The harvest is coming, and the down line is when we’ll be able to reap it.”