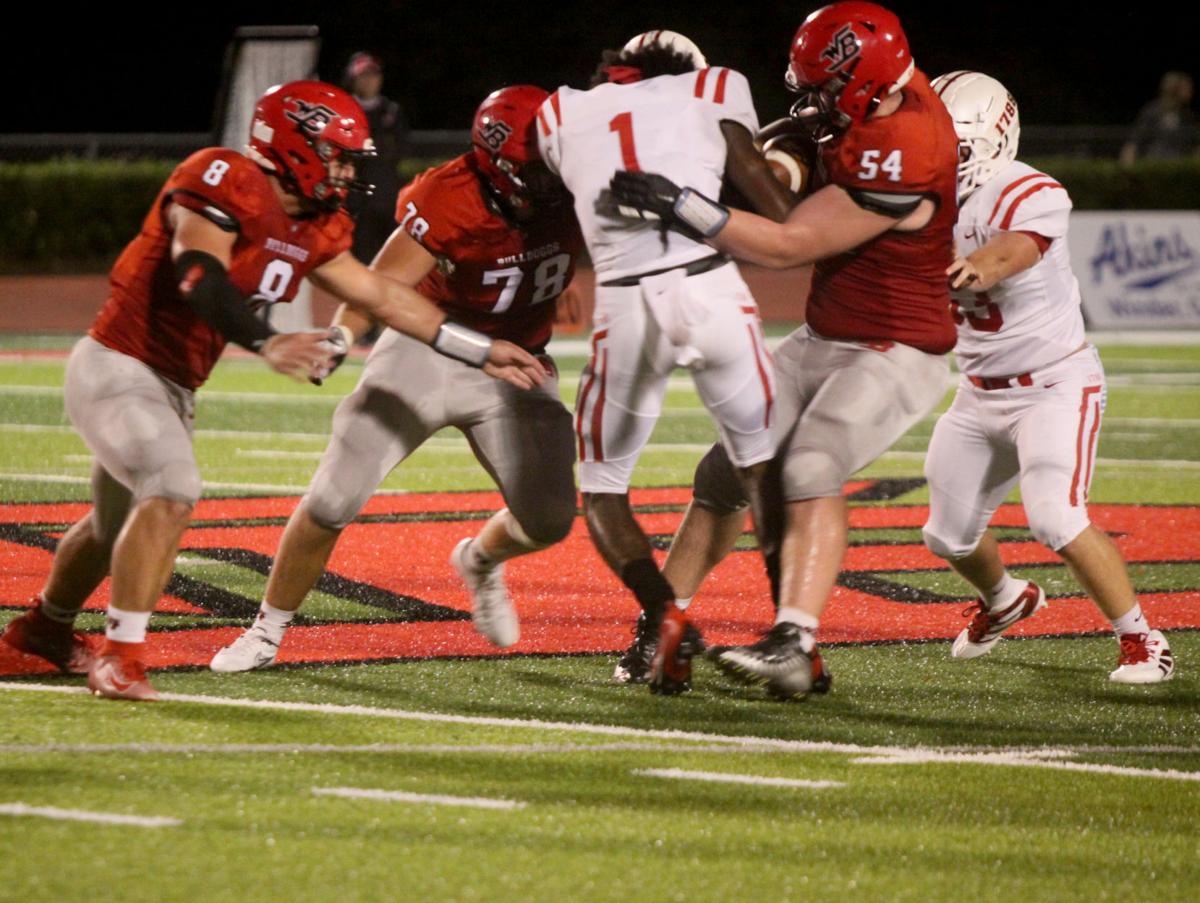 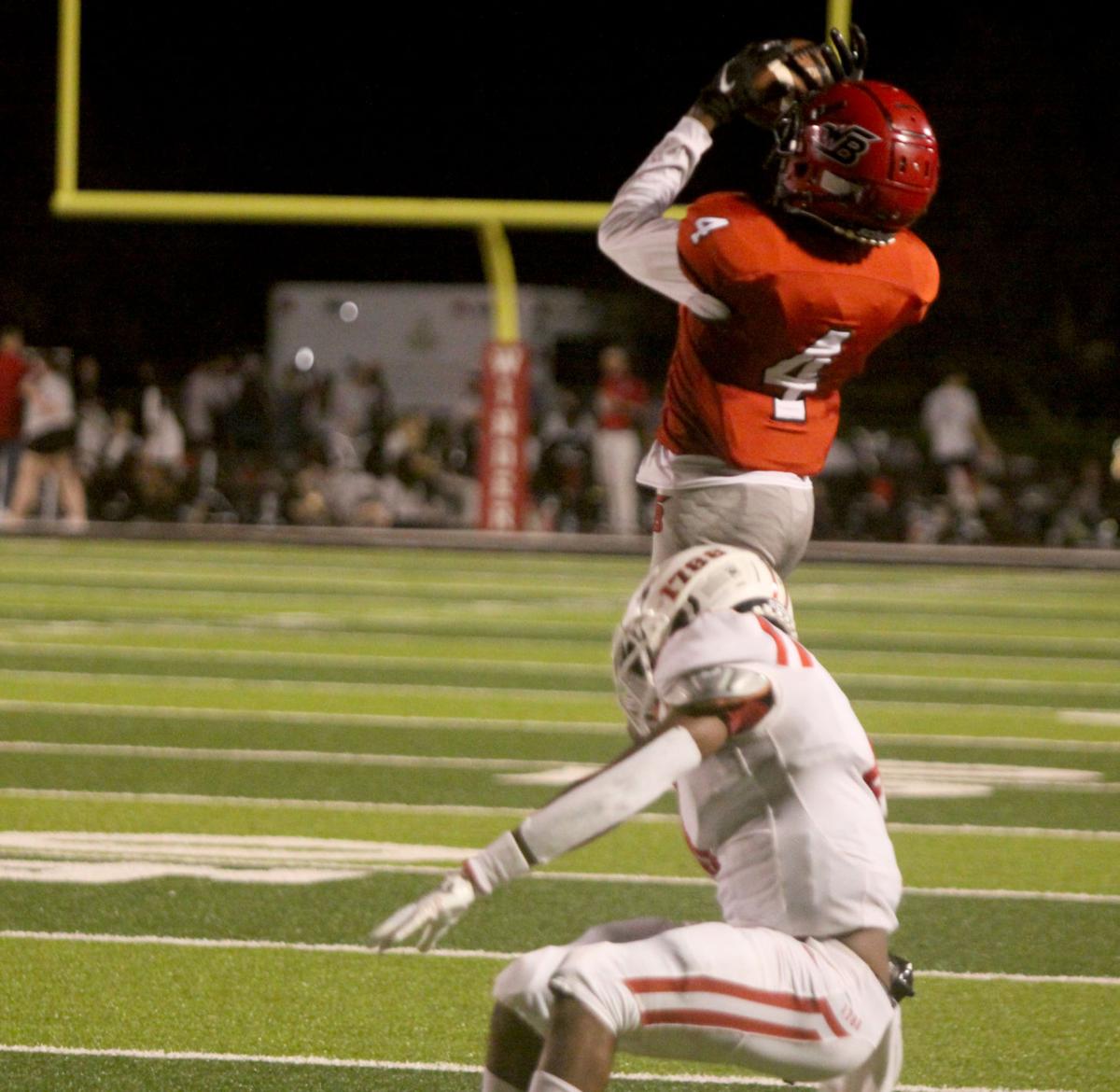 Winder-Barrow receiver Stewart Allen makes a jumping catch before scoring on a 49-yard touchdown pass from Trevor Summerfield during the third quarter of Friday's game. 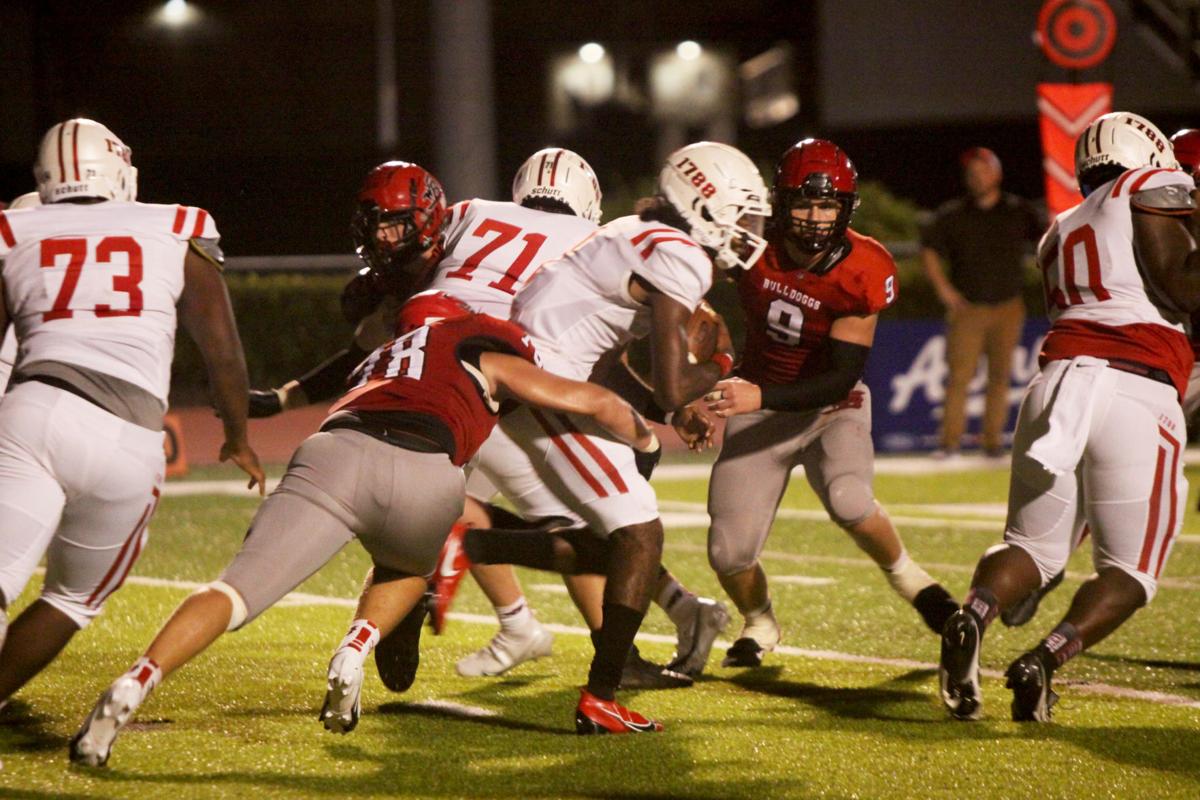 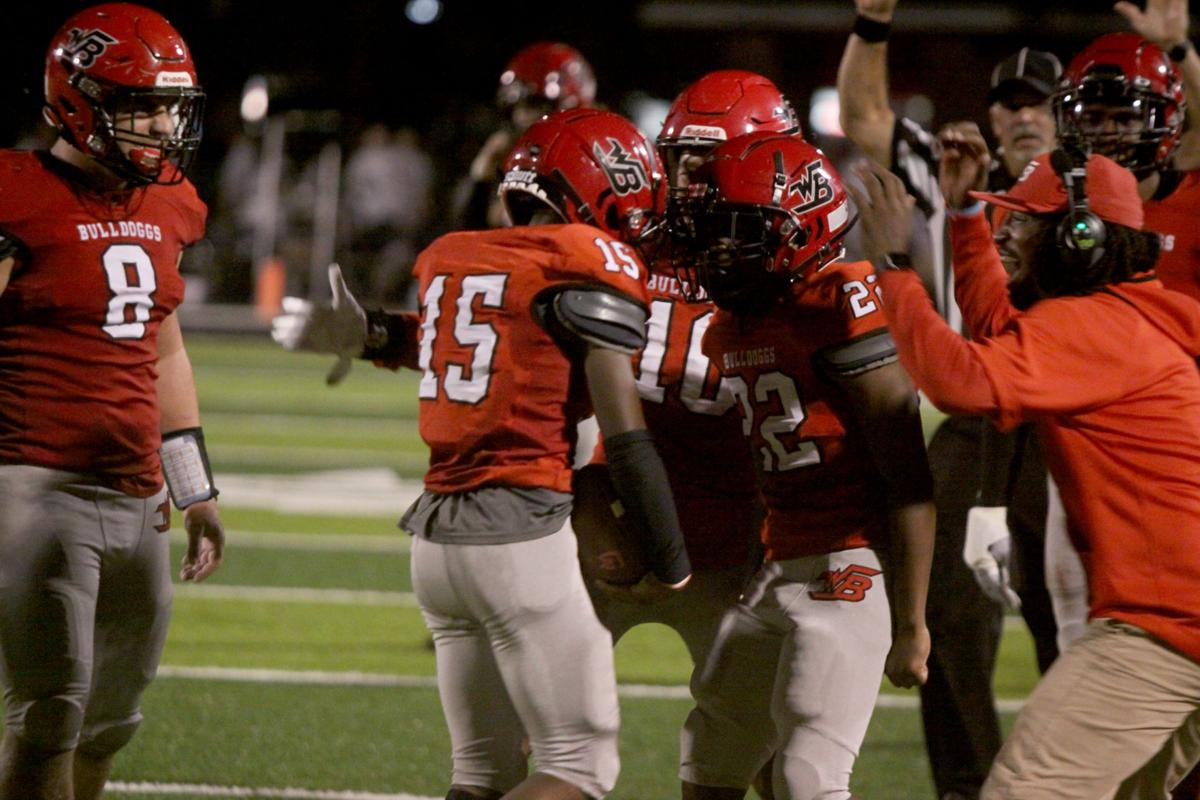 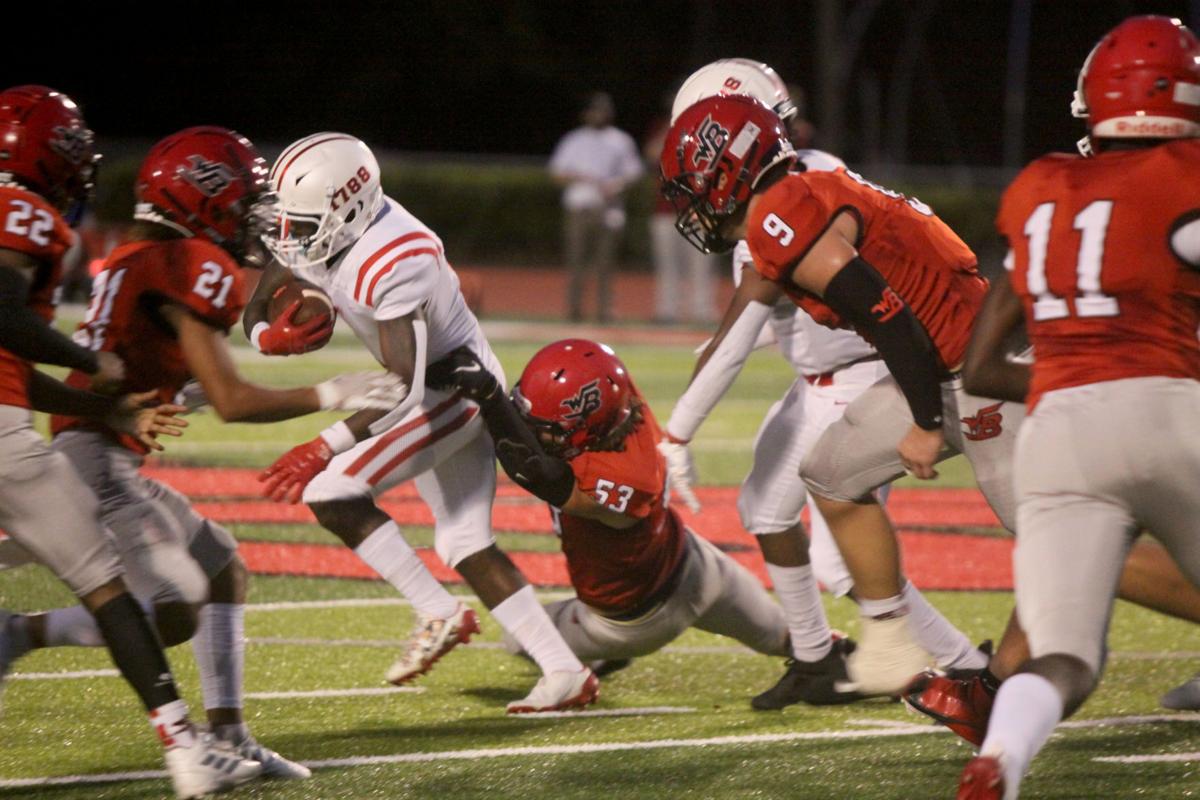 Winder-Barrow's Dylan Gmerek (53) gets a hand in to slow down a Glynn Academy runner during Friday's game. 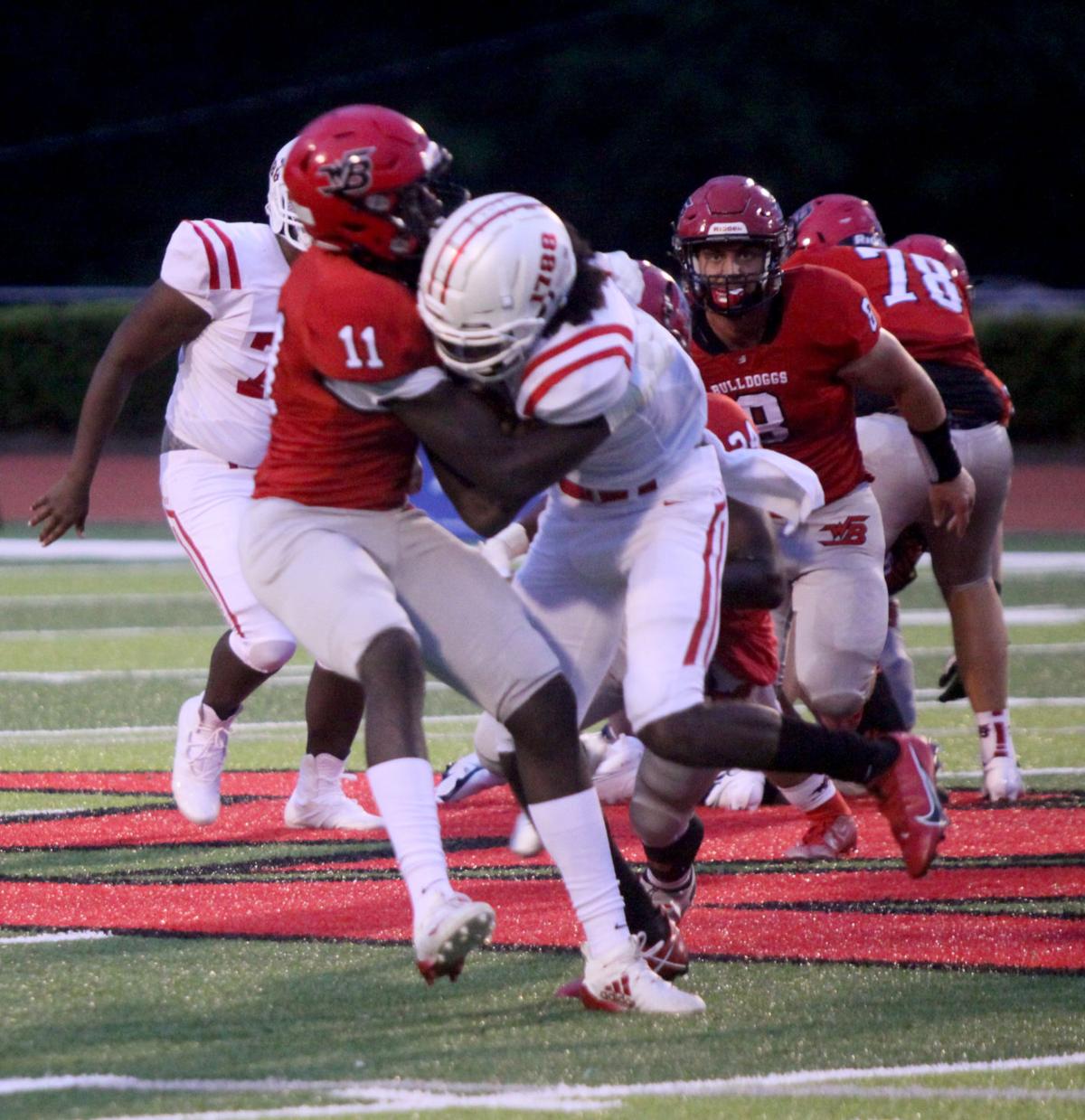 Winder-Barrow's Timothy Presley (11) makes a stop on defense during the first half of Friday's game. 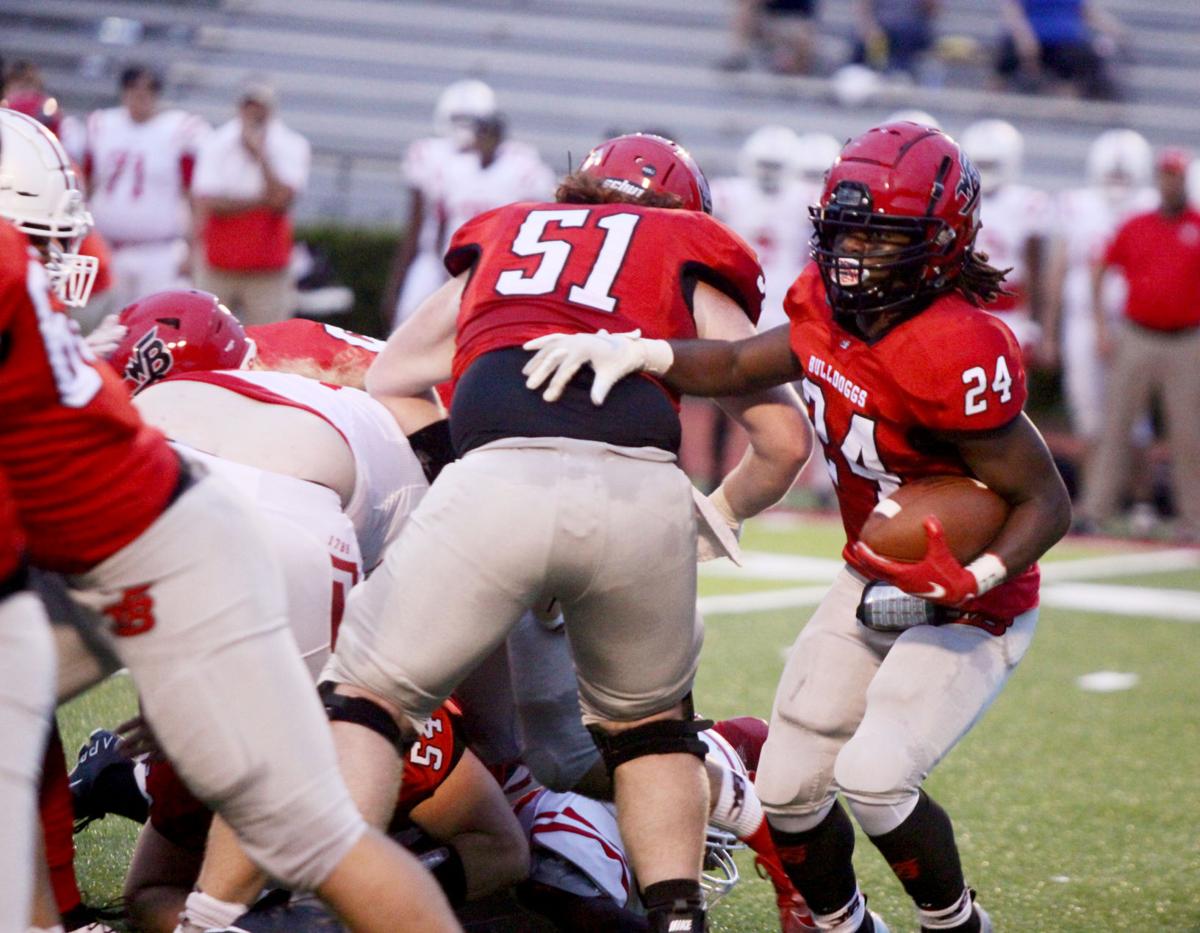 Winder-Barrow receiver Stewart Allen makes a jumping catch before scoring on a 49-yard touchdown pass from Trevor Summerfield during the third quarter of Friday's game.

Winder-Barrow's Dylan Gmerek (53) gets a hand in to slow down a Glynn Academy runner during Friday's game.

Winder-Barrow's Timothy Presley (11) makes a stop on defense during the first half of Friday's game.

Winder-Barrow coach Ed Dudley saw vast defensive improvement from his team Friday night as the Bulldoggs came up with four turnovers and had a chance to pull out a win over visiting Glynn Academy at W. Clair Harris Stadium in the first-ever meeting between the two schools.

But the Bulldoggs were stymied on offense as they committed three turnovers themselves and had a pair of costly mistakes on special teams in a 21-14 loss. Senior quarterback TJ Lewis scored on a 25-yard touchdown run with 5:28 remaining in the game to give Glynn Academy the lead, and the Red Terrors (2-1) held on from there as Joseph Beckham’s interception with under a minute left put a bow on the victory.

“The turnovers really hurt us tonight, and we came up one (score) short,” said Dudley, whose team dropped its second straight contest to fall to 1-2 on the year. “I’m very proud of this team tonight. I thought our effort was great. Our energy was good. We made a lot of improvement in how we prepared for this game, and it showed. We played a class program from south Georgia and had a chance to win it at the end. But you can’t turn the ball over like that and expect to do so.”

One of the most crucial giveaways for the Bulldoggs came right after Lewis’ go-ahead score. J.C. Green had an electric kickoff return well into Glynn Academy territory, but during a pile-up, the Red Terrors were able to come away with the ball and return it back up to their 42.

The Terrors returned the favor with a fumble of their own a couple plays later, as Winder-Barrow’s Timothy Presley came up with a loose ball at the Glynn Academy 37. But another Bulldogg fumble pushed them all the way back to their 48 and the drive never really got going.

Winder-Barrow had one more chance with under a minute left, but Trevor Summerfield’s pass over the middle of the field bounced off the leg of a sliding Conyer Smith, who attempted to catch it, and into the outstretched arms of Beckham to seal the win for the Terrors.

In their 27-14 loss to Eastside the previous week, the Bulldoggs were plagued by a 17-point first quarter that was sparked largely by a blocked punt deep in their own territory. It happened again Friday as Cameron Joseph broke through the line, got his hands on Brooks House’s kick and scooped up a perfect bounce to stroll into the end zone and give the Terrors a 7-0 lead with 4:55 left in the first quarter.

The Bulldoggs returned the favor, though, on the first play of the second quarter as senior defensive end Jacob Merrifield wrapped up Lewis on a scramble and ripped the ball away before thundering 55 yards the other way to cut the deficit to 7-6 after a missed extra-point try.

Winder-Barrow was bitten by the turnover bug for the first time a few minutes later. After snuffing out a fake field goal attempt by the Terrors, the Bulldoggs coughed the ball up at their 31, and on the first play of the ensuing drive Lewis rolled out and hit David Prince, who rumbled down the left side into the end zone to boost Glynn Academy’s lead to 14-6.

The Bulldoggs tied the game with 4:22 left in the third quarter when Summerfield, facing a third-and-13 at the Glynn Academy 49, threw one up for Stewart Allen, who won the one-on-one contest with the Terror defensive back and waltzed in for the score. Green then took a direct snap on the two-point conversion and punched it in to make it 14-14.

Winder-Barrow seized the momentum on the next possession when Omarius Smith picked off a Lewis pass, but it was short-lived as the Bulldoggs’ drive stalled at the Glynn Academy 44 and they had to punt.

The teams then exchanged punts again, but the Red Terrors were able to flip the field position and took over at the Bulldogg 43 with 7:35 remaining in the game. That set up the heroics by Lewis, who faked a handoff on the fifth snap of the drive and carried it in untouched down the left side. The three-star, dual-threat Louisville commit finished the night with 108 yards on the ground — 85 of those in the second half — and threw for 104 yards and the touchdown pass to Prince, working around a pair of interceptions.

“He’s a dangerous cat, and when he’s out in the open field, he’s hard to get around,” Dudley said of Lewis. “He’s just got a lot of speed and is a tremendous player.”

The Bulldoggs will be off next week before traveling to Athens on Oct. 2 to face Cedar Shoals in their final non-region tune-up before Region 8-AAAAAA play begins Oct. 9 at Habersham Central.

“We’re going to hopefully get a few guys healed up, get some guys back, and take a look at what we’re doing and see if we can get better,” Dudley said. “We’ve just got to keep improving and find a way to win these kinds of games.”