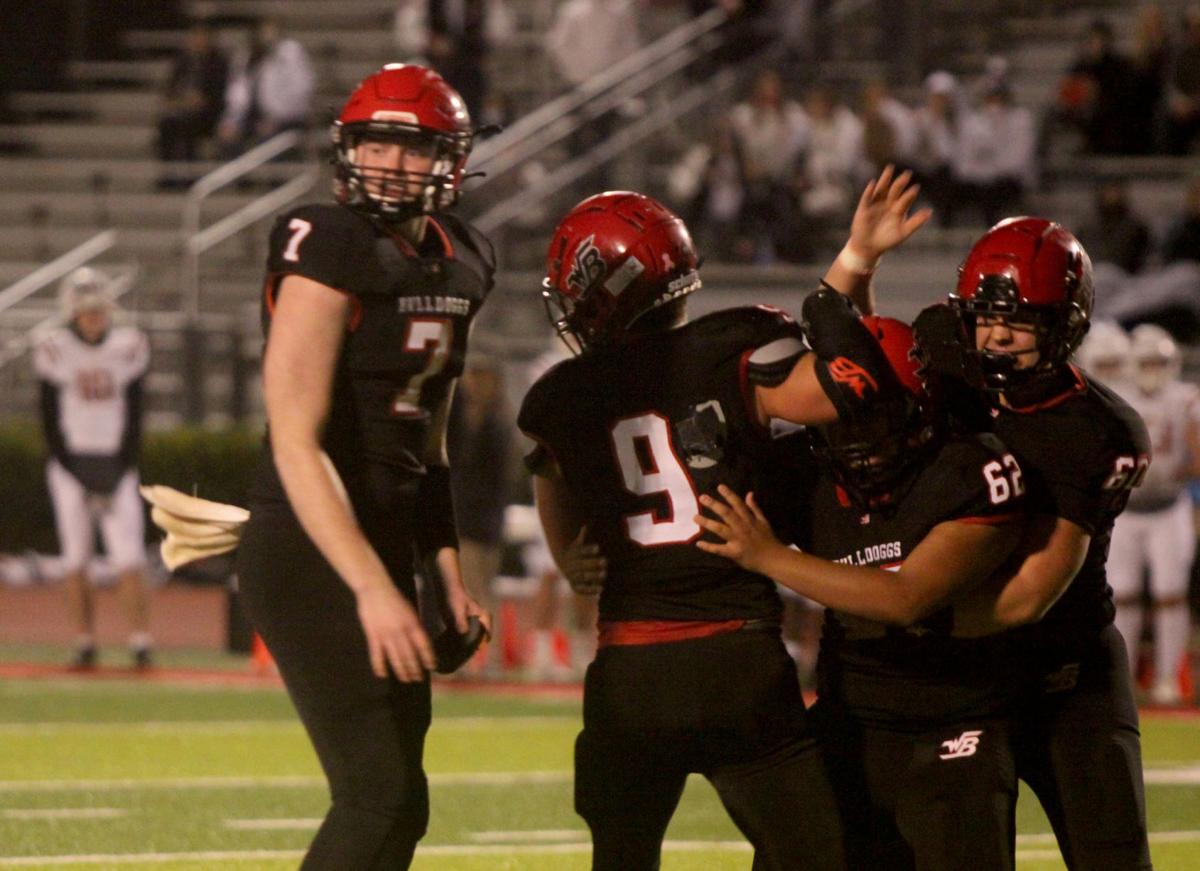 Winder-Barrow's Ivan Rodriguez (62) is mobbed by teammates after kicking a 32-yard field goal with 32 seconds left to lift the Bulldoggs to a 17-14 win over Lanier on Friday, Nov. 20. The victory clinched a state playoff berth for the Bulldoggs. 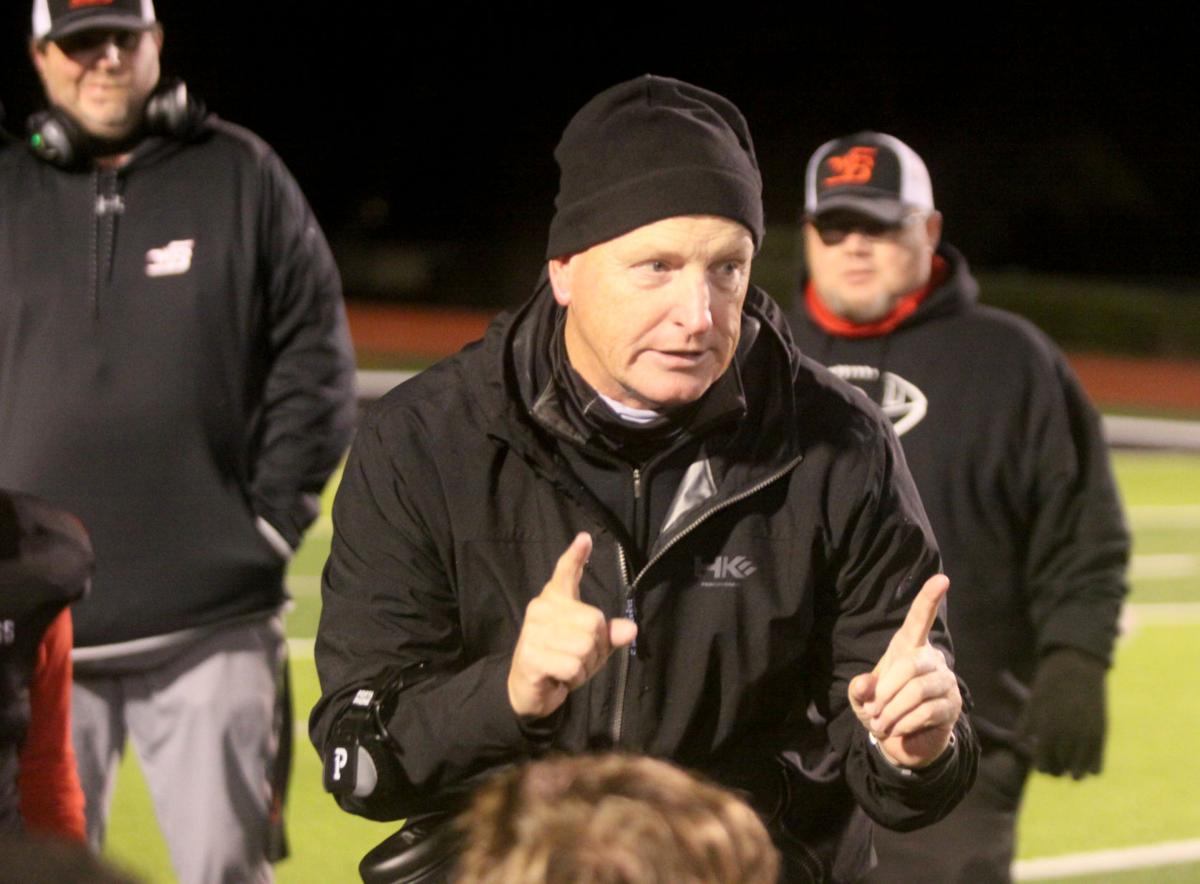 Winder-Barrow coach Ed Dudley talks to his team after the Bulldoggs' win over Lanier on Friday. 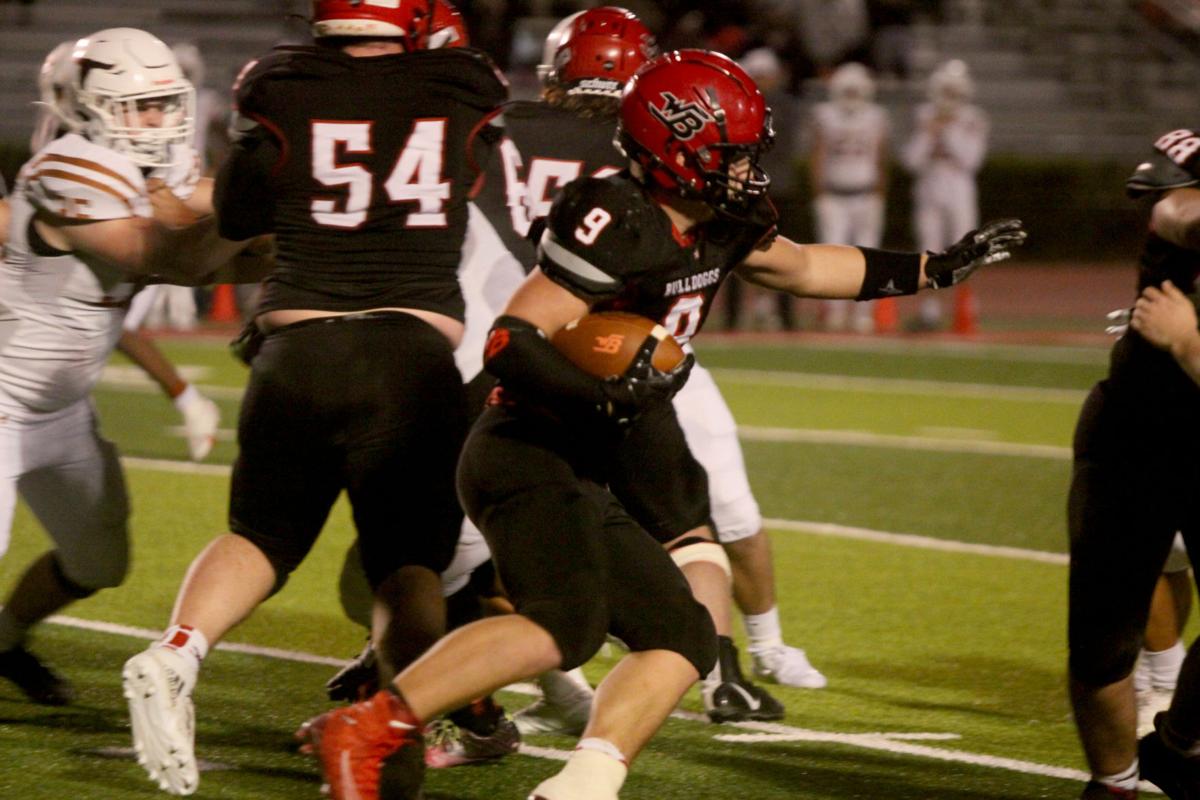 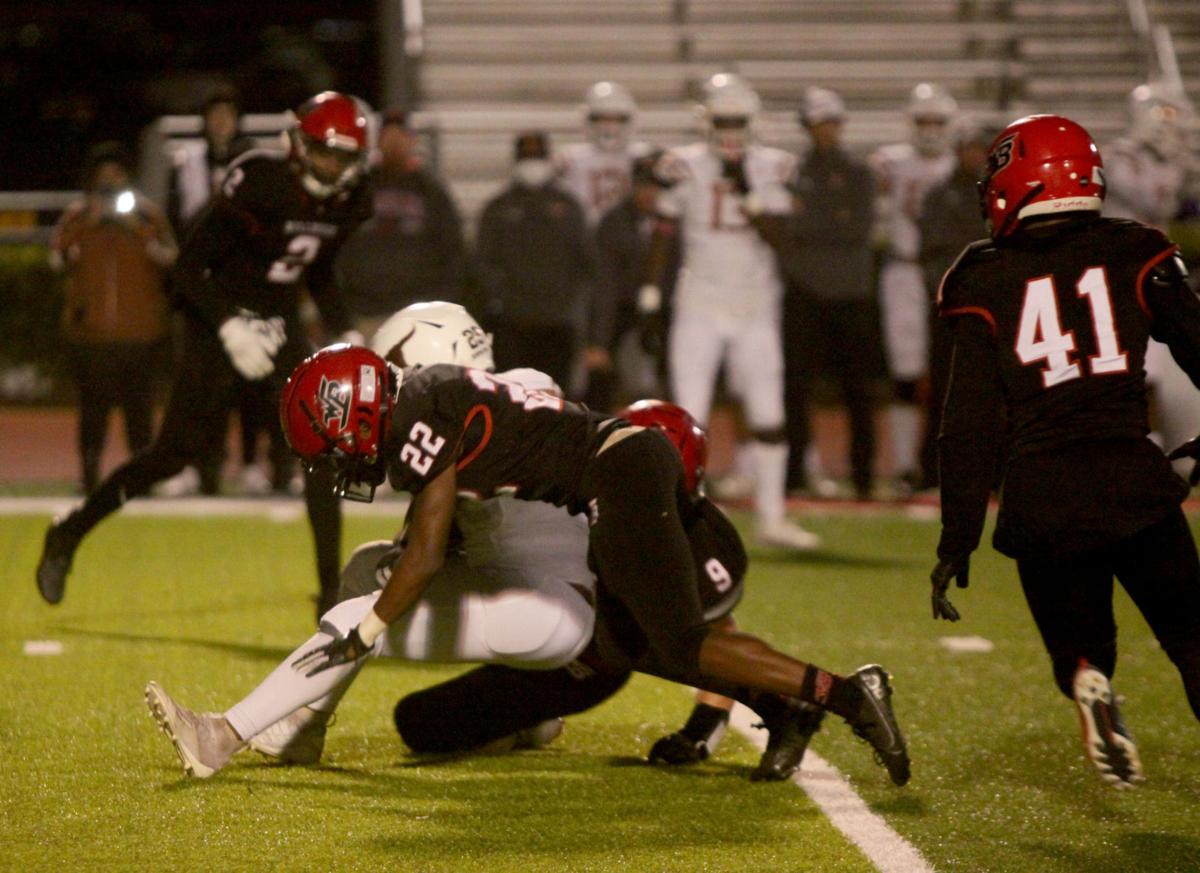 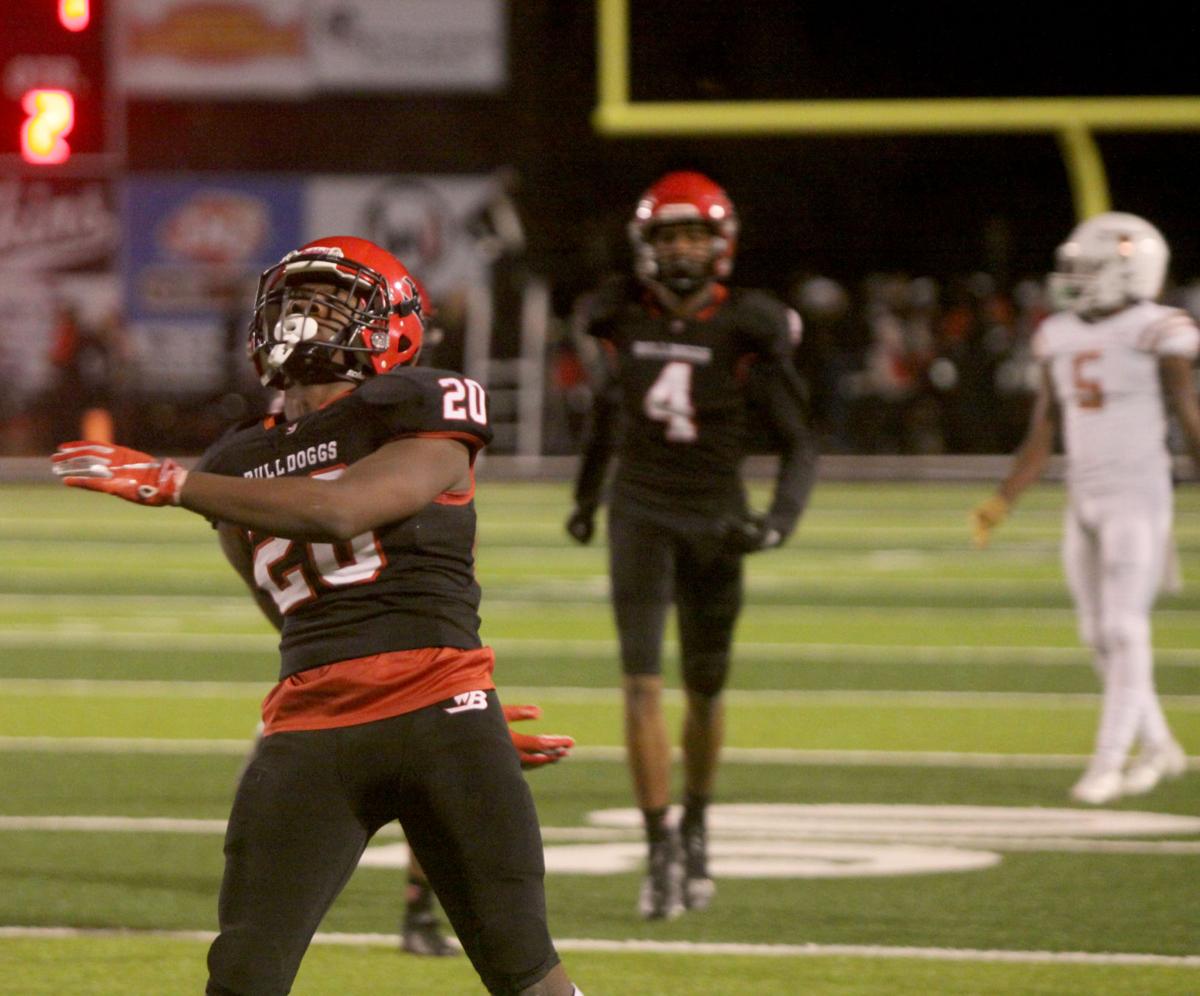 Winder-Barrow's Jatavious Williford celebrates a big defensive play in the first half Friday. 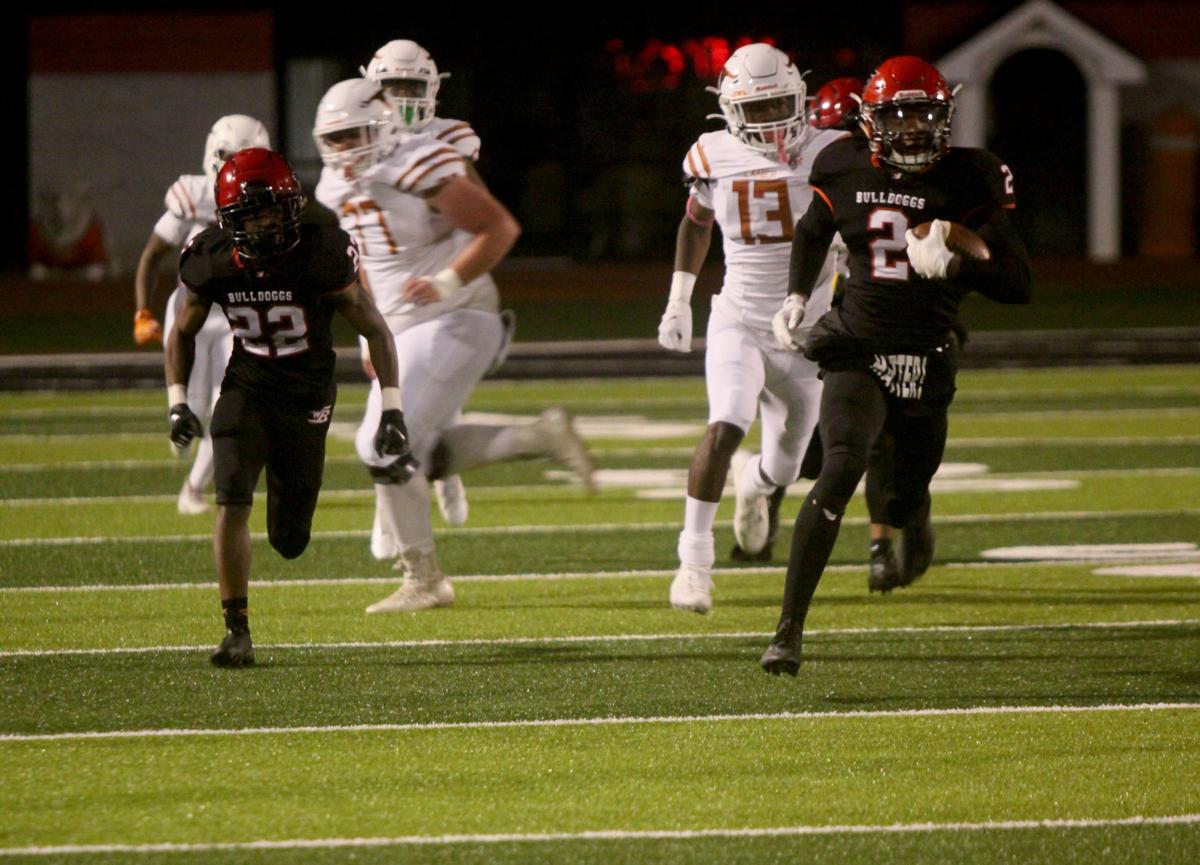 Winder-Barrow's Andrew Lewis returns an interception into Lanier territory at the end of the first quarter Friday. Lewis had two interceptions on the night, including a 64-yard pick-six in the third quarter. 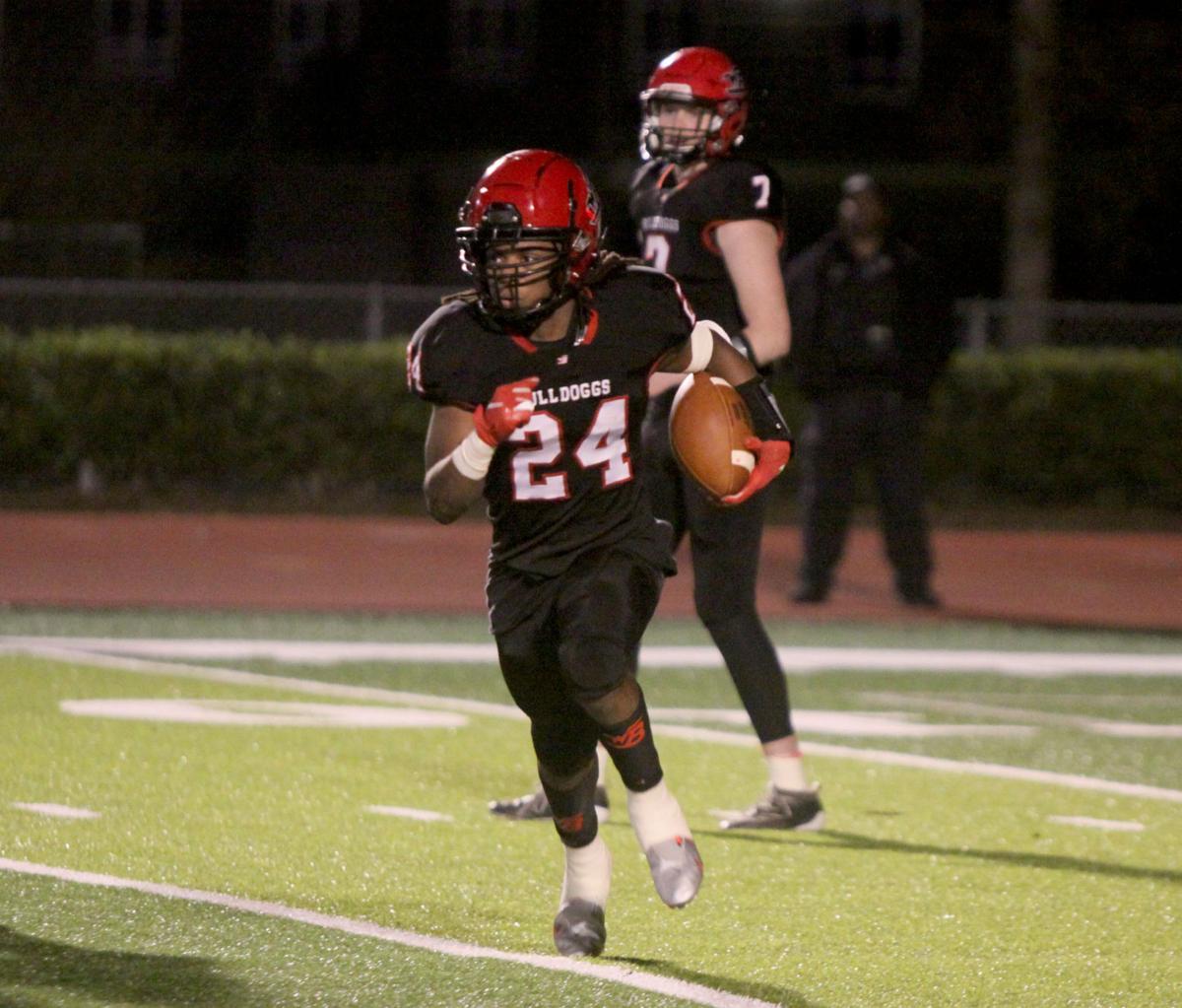 Winder-Barrow senior J.C. Green carries the ball during the second quarter for the Bulldoggs. 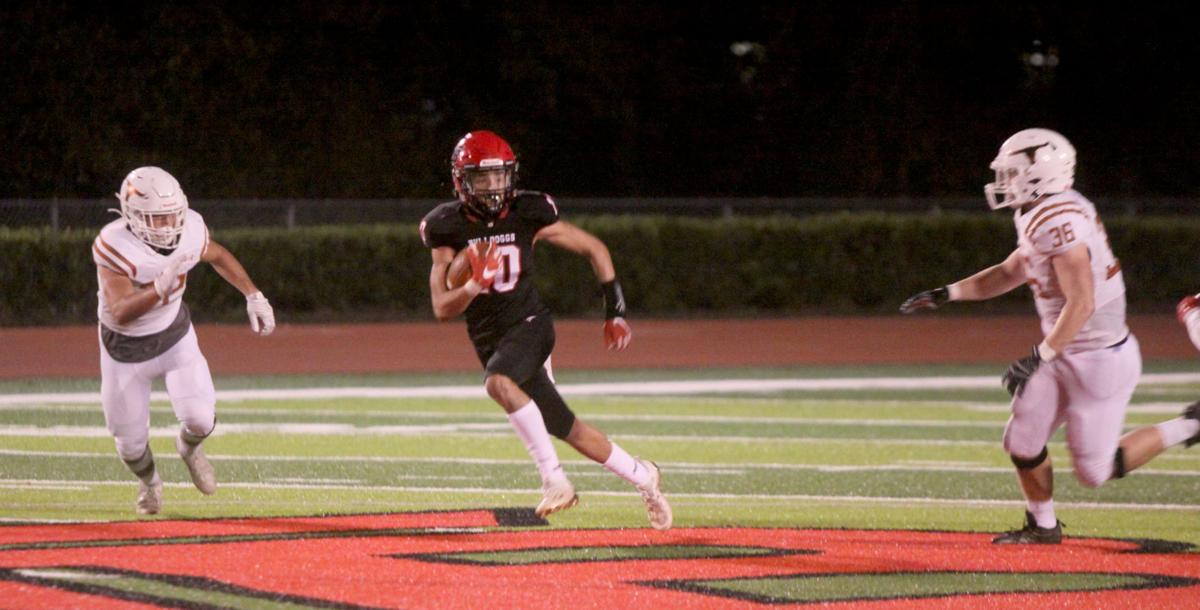 Winder-Barrow's Tre Gaudlock makes a catch during the second quarter of Friday's game. 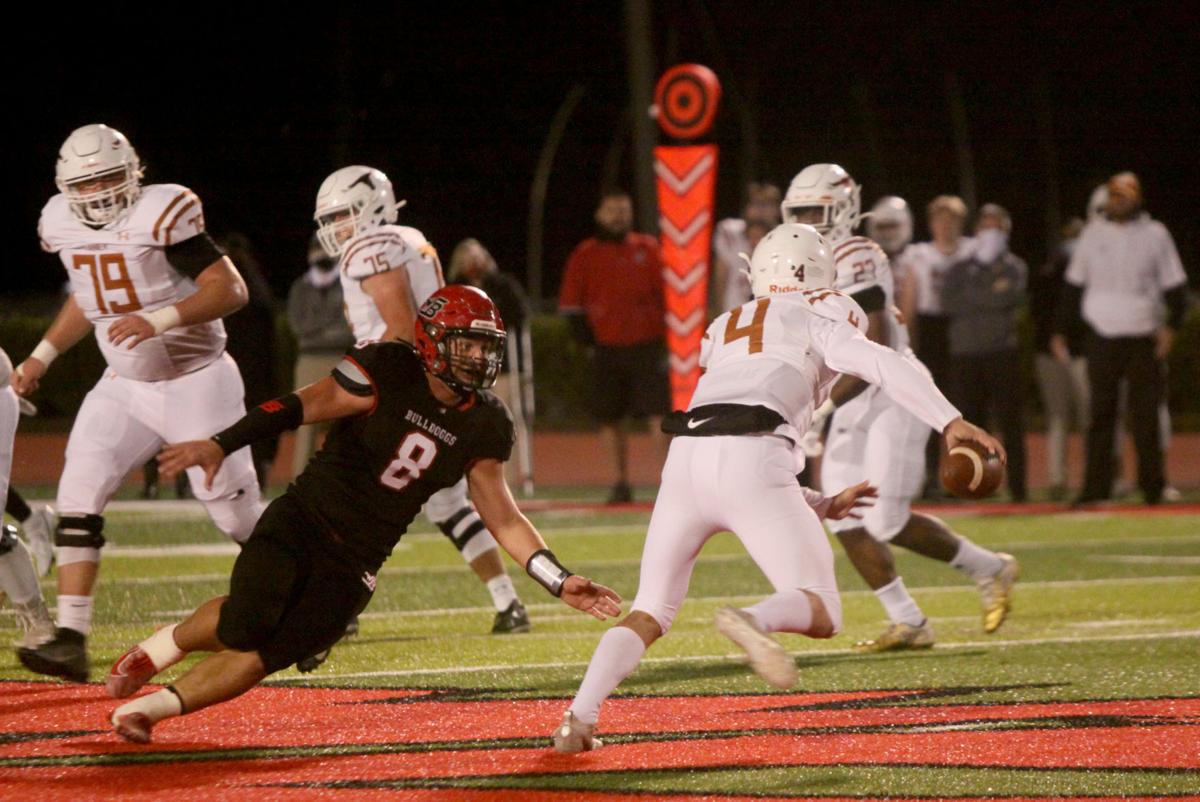 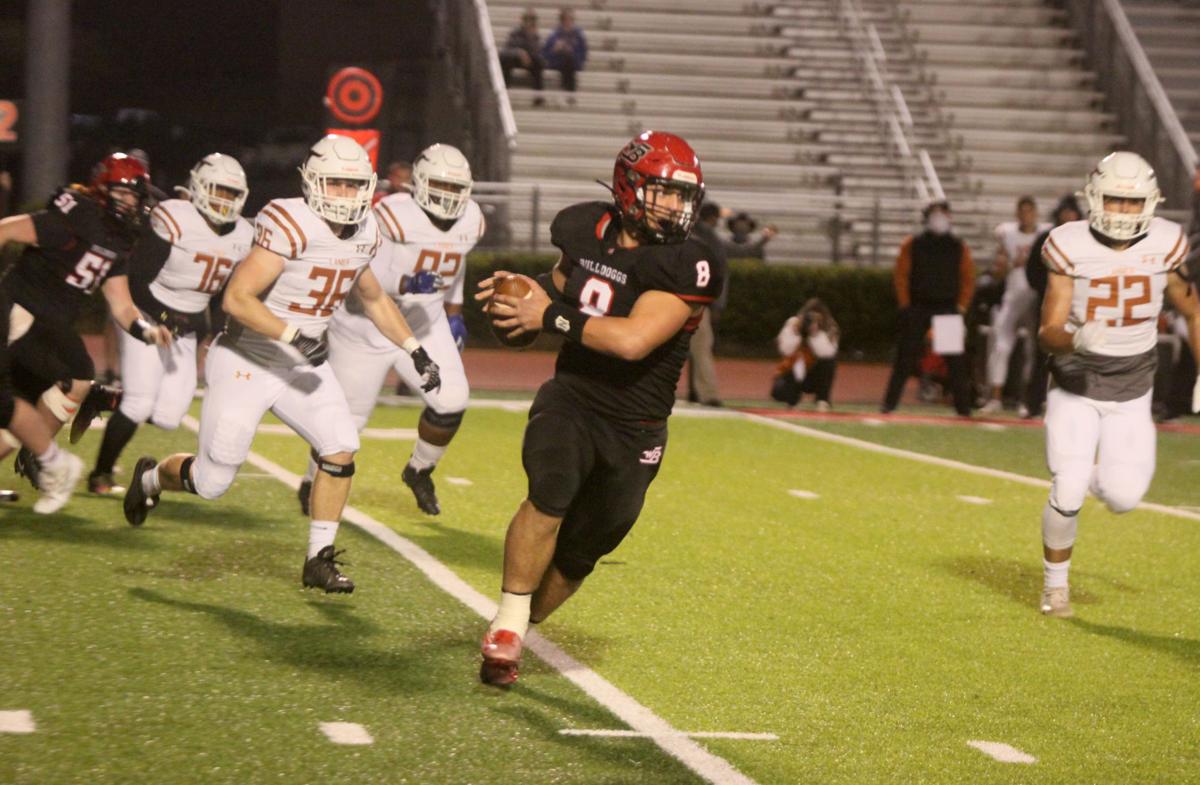 Winder-Barrow's Chandler Maxwell makes a catch and turns upfield during the first half Friday.

Winder-Barrow's Ivan Rodriguez (62) is mobbed by teammates after kicking a 32-yard field goal with 32 seconds left to lift the Bulldoggs to a 17-14 win over Lanier on Friday, Nov. 20. The victory clinched a state playoff berth for the Bulldoggs.

Winder-Barrow coach Ed Dudley talks to his team after the Bulldoggs' win over Lanier on Friday.

Winder-Barrow's Jatavious Williford celebrates a big defensive play in the first half Friday.

Winder-Barrow's Andrew Lewis returns an interception into Lanier territory at the end of the first quarter Friday. Lewis had two interceptions on the night, including a 64-yard pick-six in the third quarter.

Winder-Barrow senior J.C. Green carries the ball during the second quarter for the Bulldoggs.

Winder-Barrow's Tre Gaudlock makes a catch during the second quarter of Friday's game.

Winder-Barrow's Chandler Maxwell makes a catch and turns upfield during the first half Friday.

Winder-Barrow knew one of its tallest tasks coming into this season would be replacing Harlin Brown, who had been one of the top kicking specialists in north Georgia over the previous three years. And the Bulldoggs have indeed been a work in progress throughout the fall, trying out a handful of different players in different roles in the kicking game.

So it was only fitting, in the regular-season finale against Lanier Friday night, Nov. 20, that Brown’s replacement on field goals and extra points came through in the biggest of moments and kept the Bulldoggs’ season alive.

Sophomore Ivan Rodriguez knocked a 32-yard field goal through the uprights with 32 seconds left to break a tie, and a last-ditch 50-yard attempt by Lanier’s Mason Mancilla on the final play came up short as the Bulldoggs defeated the Longhorns 17-14 at W. Clair Harris Stadium, clinching their second consecutive state playoff berth and sixth in the last seven seasons.

With Habersham Central's win over Shiloh on Saturday afternoon, Nov. 21, the. Bulldoggs (5-5, 3-3 GHSA Region 8-AAAAAA) will be the No. 4 seed out of the region and will travel to take on Region 5 champion Carrollton (6-2) in the first round Nov. 28.

Playoff positioning, though, was secondary to the Bulldoggs on Friday as they celebrated the capper to a strong second half of the regular season that saw them overcome a 1-4 start and win four out of their final five games — the only setback a 45-7 loss last week to second-ranked Buford, which won the region title Friday with a 35-0 shutout of second-place and fifth-ranked Dacula.

“I’m just so excited and proud of our young team for coming back and winning four of these last five after the slow start,” said Winder-Barrow coach Ed Dudley, who has the Bulldoggs in the postseason for the second time in his three seasons with the program and will be making his 19th trip to the state playoffs in his 27 years as a head coach. “I think in the second half of the year we just started playing with some confidence, and that carried over to our performances and really bolstered these guys as we’ve gone along.

“We’ve had some gaffes in the kicking game and had a couple big ones tonight, but the kicking game wound up winning it for us. That was just an amazing shot by Ivan. I’m really proud of him. He’s been pretty steady for us, but he’s really come a long way, too.”

Rodriguez’s winning kick was the deciding blow in a wild final seven minutes Friday night that saw the momentum shift back and forth.

Lanier (4-5, 1-5) began a long drive from its own 12-yard line at the start of the fourth quarter down 14-7, got a 56-yard run from Bryan Williams down to the Bulldoggs’ 19 and converted on third down and 18 from the 27 on a 19-yard pass to get inside the Winder-Barrow 10. But the Bulldoggs’ defense stiffened and batted down a pass on fourth-and-goal from the 2 to take over on downs with 7:16 remaining.

That excitement for the Bulldoggs was short-lived, however, as they went three-and-out and Lanier returned a short punt inside the 5, setting up a two-yard touchdown plunge by Williams that tied the game with 5:09 to go. The Longhorns recovered a fumble on the ensuing possession and appeared poised to take a late lead, but the Bulldoggs were able to trip up running back Tyler Washington, who fumbled the ball forward into the Winder-Barrow end zone for a touchback with 2:53 remaining.

Sophomore running back Aidan Thompson broke off a 52-yard run down to the Lanier 20, and the Bulldoggs kept the ball on the ground from there and milked the clock, setting up Rodriguez’s heroics. The Longhorns returned the kickoff to their 41 and got three straight completions from Andrew Blackford to move down to the Bulldogg 33 with three seconds left. But Mancilla’s fluttering attempt landed well short of the end zone and the Bulldoggs rushed the field in jubilation.

And while Rodriguez’s kick provided the winning points, it was the Winder-Barrow defense that ultimately made it possible. The pivotal fumble that led to the winning score was the fourth Lanier turnover of the night after the Bulldoggs intercepted Blackford three times. Senior Andrew Lewis came up with two of those, including a 64-yard interception return for a touchdown with 4:43 left in the third quarter that put the Bulldoggs in front 14-7 after Washington tied the game for the Longhorns with a 75-yard kickoff return to the house to open the second half. Lewis also had an interception inside the Bulldoggs’ 10 on the final play of the first quarter and returned it into Lanier territory, while Omarious Smith picked off a long heave by Blackford to end the first half.

Winder-Barrow’s lone offensive touchdown came on a 10-yard scamper by J.C. Green with 53 seconds left in the first half and was set up by a 57-yard screen pass from Conyer Smith to Chandler Maxwell and a 15-yard completion from Smith to Thompson (both on third down). Green’s score put the final touch on a seven-play, 86-yard drive.

“There were so many big plays in this game for us,” Dudley said. “Our defense has definitely gotten better in the second half. That’s what we’ve been riding going into tonight and it got us over the hump in the end. We wanted to set up a dirty pocket for their quarterback. If he sets his feet, he’s an amazing passer. But no quarterback really likes to be pressured, and we did a good job of forcing him to move around and be a little uncomfortable, and we capitalized on his mistakes.”

And now, a team that was struggling mightily midway through the season will be practicing Thanksgiving week and is on to game No. 11 after gutting out a tough victory.

“We were such a young team early on that we might have crumbled at a couple points tonight if this game were earlier in the year,” Dudley said. “But we’ve come a long way, and tonight we hung in there.”