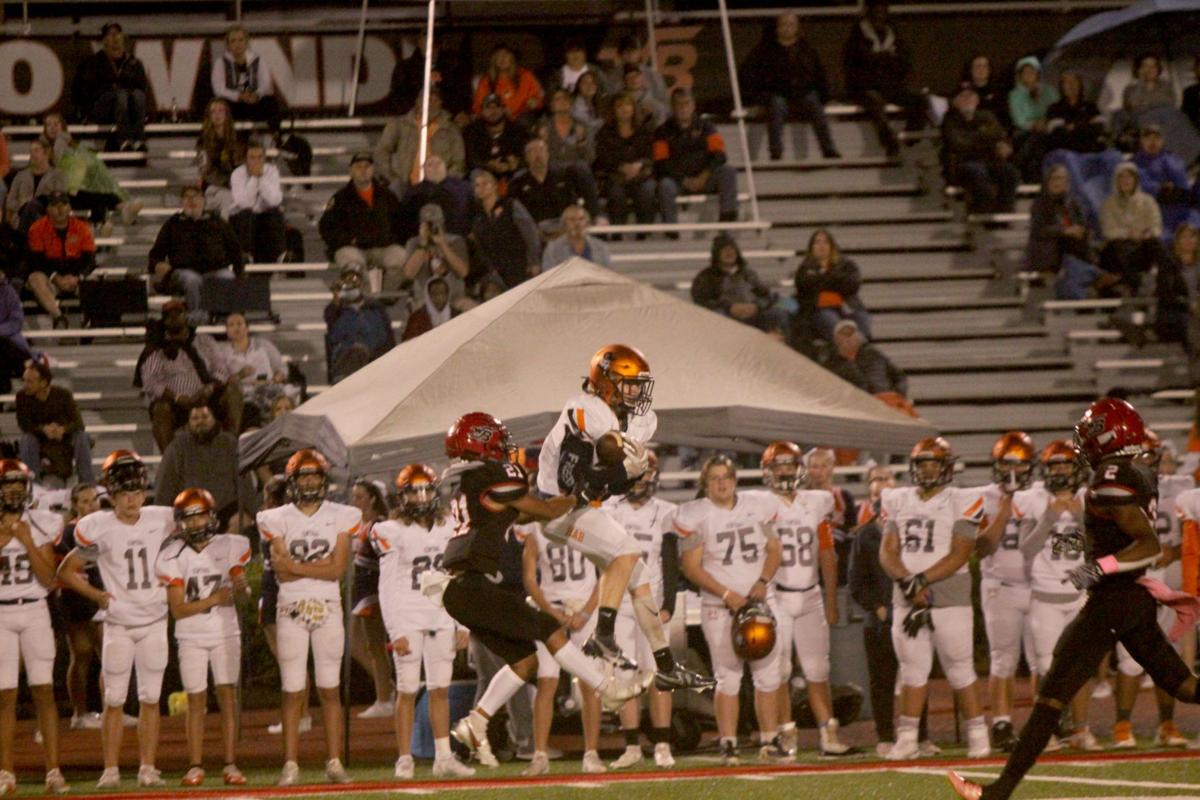 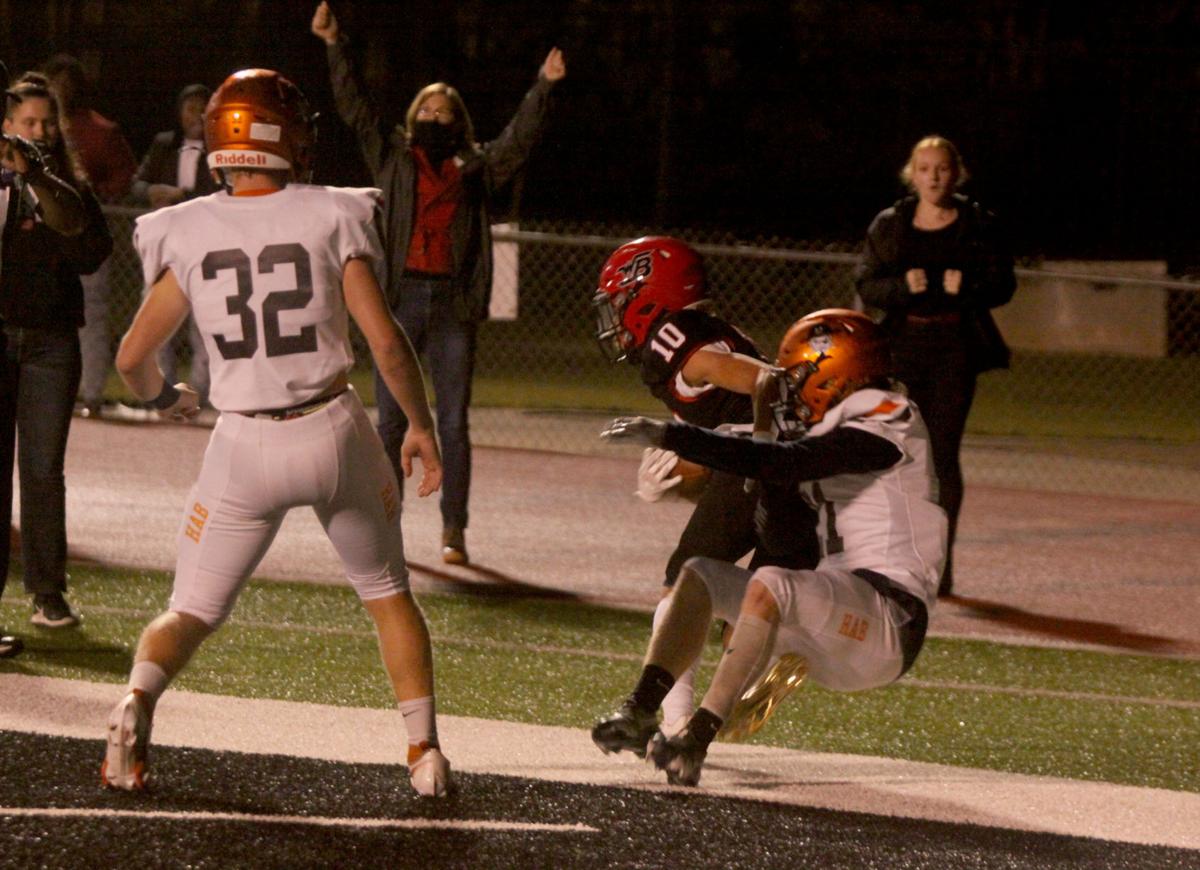 Winder-Barrow's Tre Gaudlock tries to come down with a touchdown reception during the first quarter Friday but is ruled out of bounds. Gaudlock wound up hauling in a 45-yard touchdown pass from Trevor Summerfield in the second quarter. 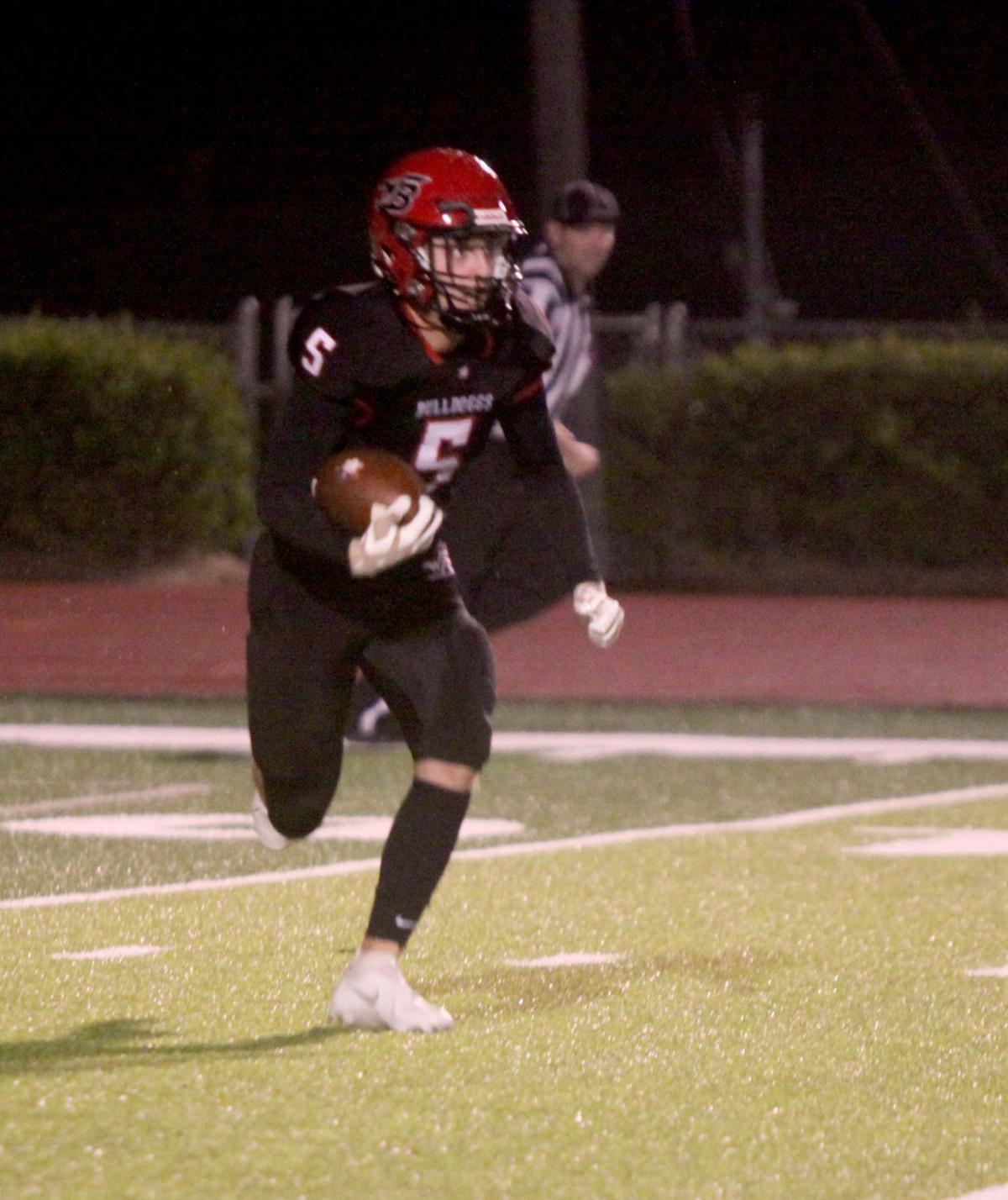 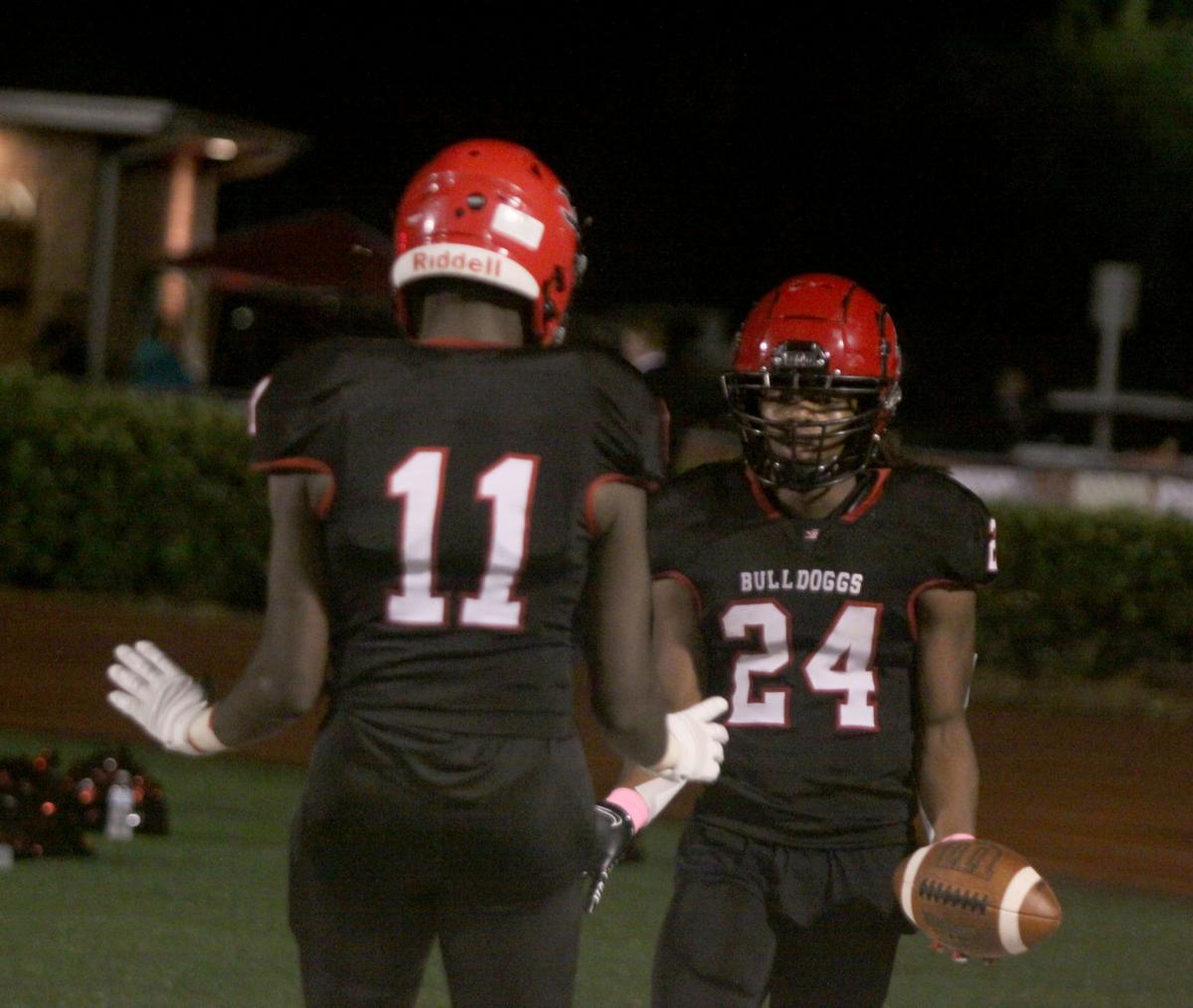 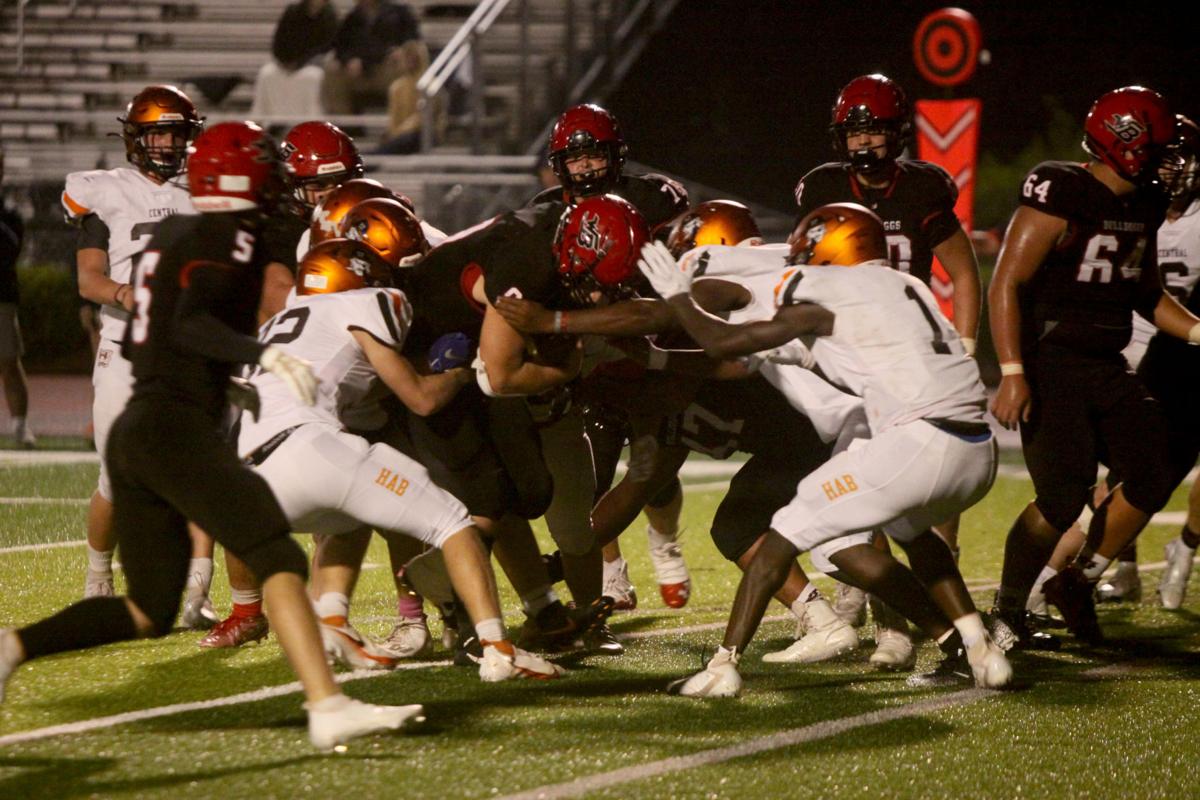 Winder-Barrow's Aidan Thompson fights for yardage during the third quarter of Friday's game. 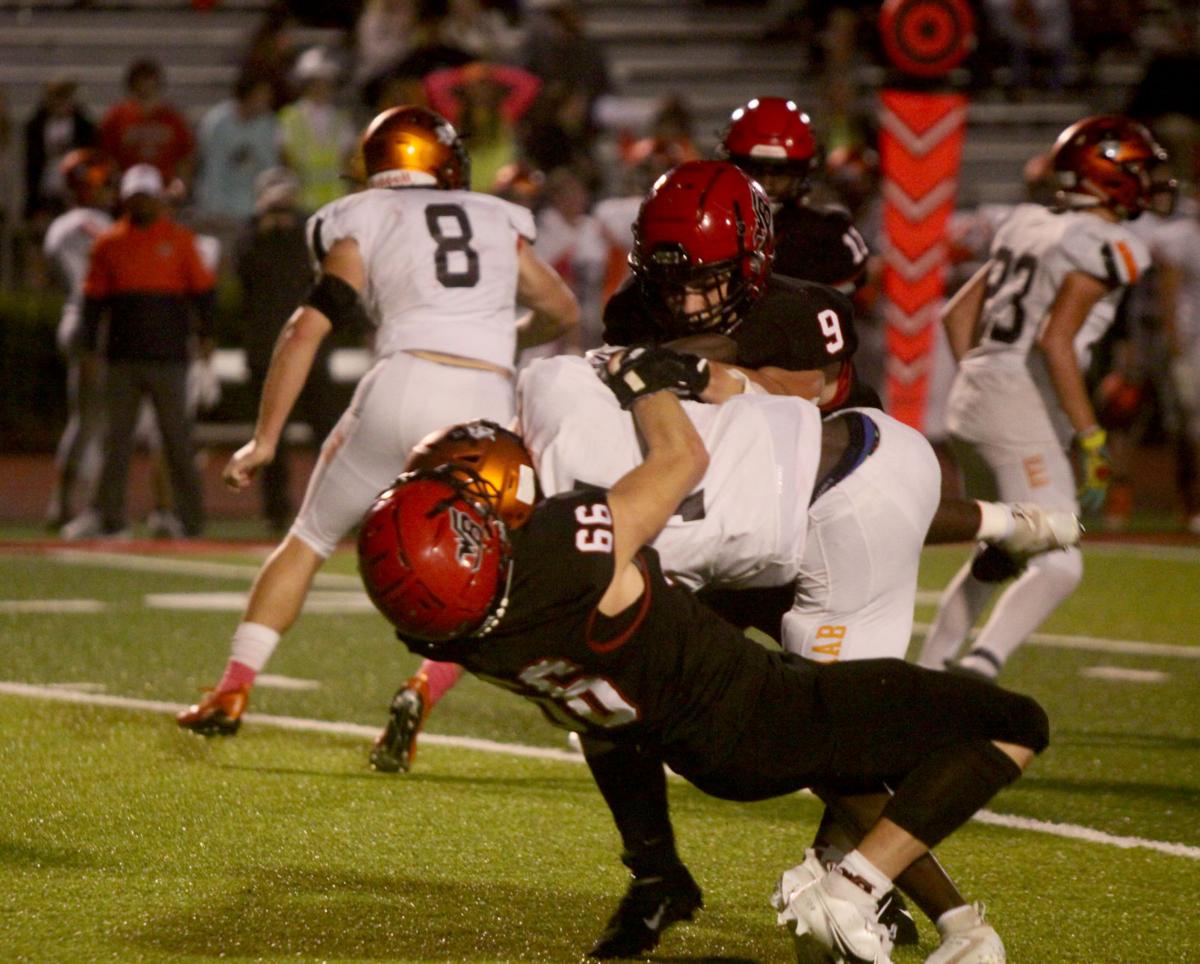 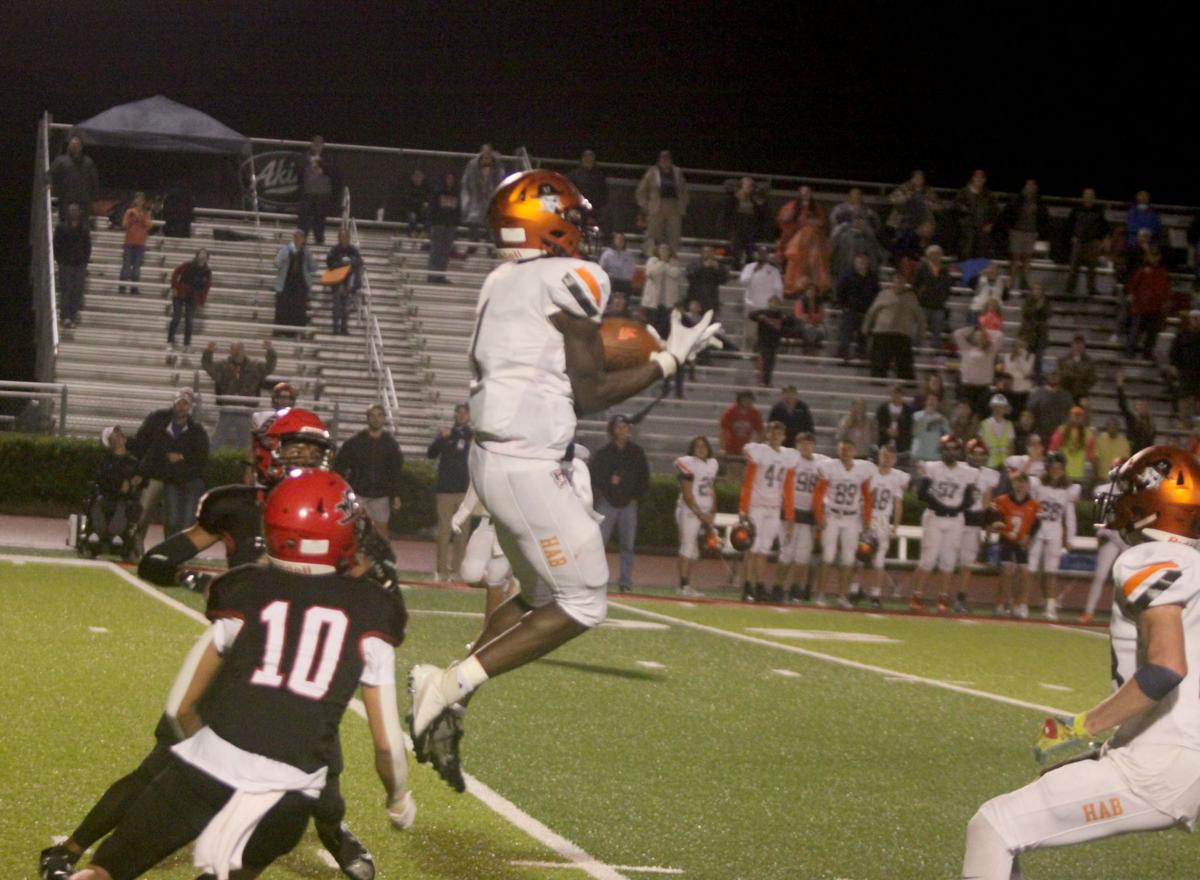 Habersham Central's Joshua Pickett comes up with an interception to seal the Raiders' 27-21 victory Friday over Winder-Barrow.

Winder-Barrow's Tre Gaudlock tries to come down with a touchdown reception during the first quarter Friday but is ruled out of bounds. Gaudlock wound up hauling in a 45-yard touchdown pass from Trevor Summerfield in the second quarter.

Winder-Barrow's Aidan Thompson fights for yardage during the third quarter of Friday's game.

Habersham Central's Joshua Pickett comes up with an interception to seal the Raiders' 27-21 victory Friday over Winder-Barrow.

Costly mistakes on offense and on special teams at inopportune times had factored heavily into Winder-Barrow’s two consecutive losses heading into its game with Habersham Central on Friday night, Oct. 9, at W. Clair Harris Stadium. And in a heartbreaking turn of events, that streak of misfortune continued for the Bulldoggs.

With less than a minute to play in a tied game, senior defensive back Austin Wood stepped into the path of Winder-Barrow quarterback Trevor Summerfield’s pass, intercepted it and returned it to the WBHS 2-yard line. Then, after a three-yard loss, Habersham quarterback Joshua Pickett kept the ball and plowed in from 5 yards out with 33 seconds to go to lift the Raiders to a 27-21 win in both teams’ GHSA Region 8-AAAAAA opener.

The win provided Habersham (3-2, 1-0 region) some revenge for a Winder-Barrow victory in Mt. Airy last year that knocked the Raiders out of postseason contention, and it spoiled homecoming night for the Bulldoggs, who dropped to 1-3 overall and 0-1 in region play.

While the Bulldoggs came away with four turnovers on defense, they also committed four turnovers on offense, missed a 28-yard field goal attempt in the first half and had another try — which would have put them up by 10 — blocked late in the third quarter.

“It’s just a disappointing loss,” said a subdued Winder-Barrow coach Ed Dudley, whose team had been off the past two weeks — for a scheduled open date Sept. 25 and the cancelation of a scheduled Oct. 2 game at Cedar Shoals due to coronavirus precautions. “I was very proud of our effort, and I think we improved during those two weeks off. But we’ve still got to get better and we’ve got to find a way to win games like this.”

Pickett, a three-star defensive back who was converted from wide receiver to quarterback on the offensive side of the ball for his senior season, accounted for all four of the Raiders’ touchdowns (all on the ground). And the Duke commit put the finishing touches on the come-from-behind victory when he picked off Summerfield’s long heave at the Raider 32 with 9 seconds left.

Despite throwing three interceptions — two to Jamarious Smith and one to his twin brother, Omarious Smith — Pickett wound up passing for 181 yards and added 69 on the ground. And he engineered a four-minute, 13-play, 71-yard touchdown drive that ended with him scampering in from 12 yards out to tie the game at 21-21 with 4:31 remaining. Pickett was able to extend the drive with a first-down run on fourth-and-2 at the Habersham 37, and the Raiders were also aided by a facemask against the Bulldoggs that took them inside the red zone.

After Pickett’s tying touchdown, both teams then exchanged punts, and the Bulldoggs got the ball back at their 22 with 55 seconds left to try to put together a game-winning drive before Wood’s interception, following a false-start penalty, set up the decisive score.

The catastrophic final minutes also spoiled a strong performance by the Winder-Barrow running game, led by senior J.C. Green, who rushed for 266 yards on 28 carries and a pair of touchdowns.

Green toted the ball six times for 67 yards and scored from 17 yards out on an eight-play, 75-yard march to start the second half, giving the Bulldoggs a 21-14 lead with just over 9 minutes remaining in the third quarter.

Then after Jamarious Smith came up with a fumble recovery at the Winder-Barrow 33 (his third turnover of the night), Green broke off a 47-yard run that got the Bulldoggs inside the Habersham 20 and in a position to extend their lead. But back-to-back false starts stalled the drive out, and Garrett Heaton blocked Ivan Rodriguez’s 34-yard field goal attempt with 13 seconds left in the quarter to keep it a one-score game.

In all, the Bulldoggs tallied 356 yards of offense, outgaining the Raiders, who finished with 282.

“J.C. had a big night, and I thought we did a good job of bumping the tempo up a little bit and showing overall improvement on offense,” Dudley said. “The offensive line, I thought, played very well tonight. But we still had way too many penalties and turnovers, and we’ve got to continue to get better.”

Green’s first touchdown of the night came on a 56-yard sprint to give Winder-Barrow a 7-6 lead with 8:49 left in the first half and capped a quick two-play, 68-yard drive that answered Pickett’s 3-yard run that put the Raiders on the board first. After Omarious Smith intercepted a Pickett pass near the Winder-Barrow goal line and returned it into Habersham territory, the Bulldoggs extended their lead on a 45-yard touchdown pass from Summerfield to Tre Gaudlock with 2:38 to go in the half.

But the Raiders quickly answered back with a 68-yard scoring drive, aided by a pass-interference penalty. Pickett dodged a pass rusher and glided around the left end for an 18-yard touchdown with 1:01 to go and then hit Grayson Taylor in the back of the end zone to knot the score at 14 at the half.

The Bulldoggs will be back in action Oct. 16 when they visit four-time defending region champion Dacula. The seventh-ranked Falcons squeaked out a 28-27 win over Lanier in their region opener Friday to improve to 2-2 overall.

Dacula is one of two ranked teams in the region, along with No. 2 Buford, the perennial powerhouse that won the Class 5A title last year before moving up in the latest realignment cycle.

“We’re in a very tough region. We’re the SEC West of high school football,” Dudley said. “We’ll bounce back Monday and get back to work.”