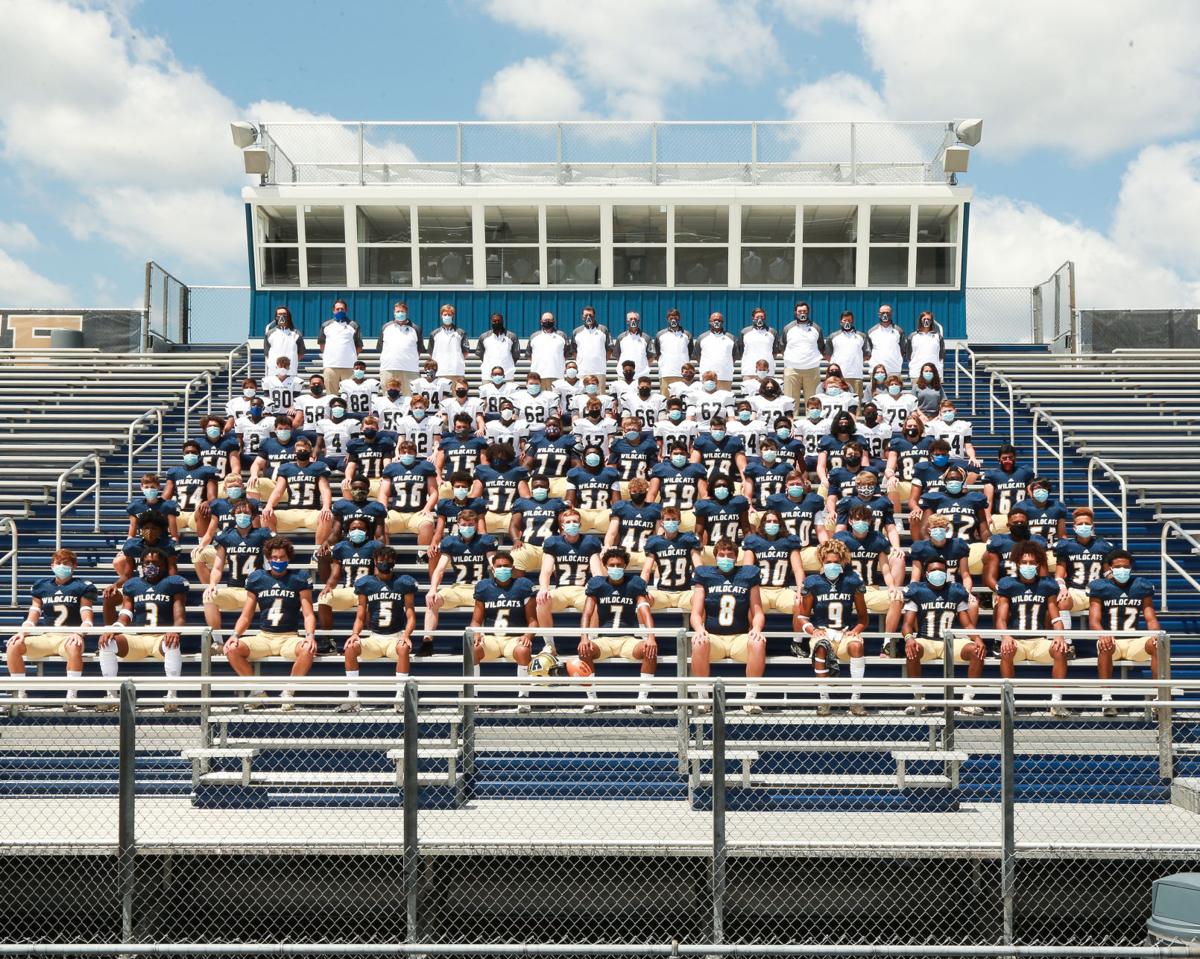 The 2020 Apalachee Wildcats are pictured. The Wildcats open their season Friday, Sept. 4, at home against Winder-Barrow. 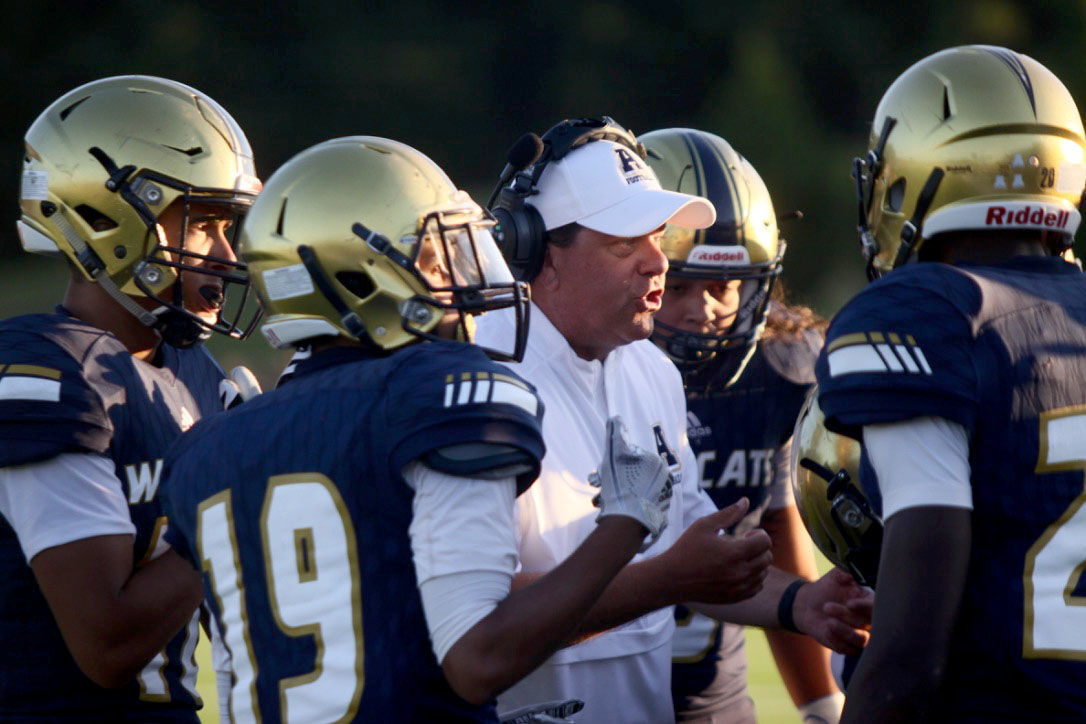 Apalachee head coach Tony Lotti is entering his third season with the Wildcats.

The 2020 Apalachee Wildcats are pictured. The Wildcats open their season Friday, Sept. 4, at home against Winder-Barrow.

Apalachee head coach Tony Lotti is entering his third season with the Wildcats.

Coaching is often about figuring how to fit square pegs into round holes, as coach Tony Lotti puts it, and the third-year Apalachee head football coach has found himself with a lot more pegs to deal with in preparation for the 2020 season.

Lotti knew after last season he would have to find players that could step up and replace the offensive and defensive output of several key seniors, but the coronavirus pandemic scrapped spring practice, much of the team’s typical summer program and a pair of preseason scrimmages he had hoped to use to gauge some players’ performance levels under the lights. And, with the Barrow County School System’s academic year starting out online amid the high numbers of COVID-19 infections in the community, Lotti has had to be flexible in getting his team’s weightlifting and film-study work in.

But despite all that, Lotti and the Wildcats are thankful that the fall season, which has at times appeared in severe doubt and still is clouded with uncertainty, is set to kick off Friday when they host crosstown rival Winder-Barrow at 7:30 p.m.

“The month of August has been long,” Lotti said last week. “When you look at the fact that we started full-on practice six weeks before our first actual game when we get to finally line up against somebody, and between all the procedures in place and waiting by the phone every Wednesday night and Thursday morning to hear from the GHSA, it’s stressful. But our kids have worked hard and done everything we’ve asked of them because they want to play.

“It’s always a challenge trying to rope teenagers in to understanding discipline, but they and their parents have been great and are trying to follow every rule possible. Our No. 1 goal is to give these kids every opportunity to play this season. We’ve followed every CDC and public health guideline we can to make this happen.

“I tell the kids often that life’s about having to play a poor hand, and they’ve taken this situation and adapted and have a very good attitude.”

Potential COVID-19 pitfalls aside, the Wildcats, who have finished 3-7 each of the first two seasons under Lotti, will have some hurdles to clear if they want to snap a decade-long streak without a postseason appearance. Among those will be replacing graduated running back Shaan Cook, who ran for 907 yards and 11 touchdowns and logged three touchdown receptions last fall, and three-year starting quarterback AJ Forbing.

Senior Todd Jones, who split time evenly with Forbing when he was a sophomore and saw snaps last year before being limited by an injury, takes over the reins full-time and has progressed well in the offseason, Lotti said.

“Todd has had some really great sessions and a great camp and is just doing a very good job of leading the team,” Lotti said of the southpaw who will guide the Wildcats’ run-heavy wing-T offense.

Apalachee will again take a committee approach in the backfield with senior Tauheed Ferguson leading the way. The speedster, who is also one of the top hurdlers in the state in track and field, was primed for a breakout junior campaign but suffered a season-ending knee injury early on in the Wildcats’ season opener.

“He’s back and had a great offseason,” Lotti said of Ferguson. “My heart broke for him when he went down last year, but he has worked his tail off not just with the rehab but everything to get himself in position to have a strong senior year.”

Junior Colby Sikes is another versatile returner who can run and catch the ball out of the backfield, senior tight end Andrew Howe is expected to be an important weapon on the offense, and seniors Chase Hunter and Tanner Carnes and junior Elijah Harris are among the returners on the offensive line.

And despite the loss of leading tacklers Tyrik Sims and Tyson Wilson and other losses in the secondary due to graduation, the Wildcats return some experienced players in senior linebacker Marcus Streeter along with junior Joseph Bentley and sophomore Tyler Ferro on the defensive line leading the charge. And Lotti has been encouraged by the off-season improvements made by junior kicking specialist Brody Ham.

Apalachee will also have to navigate a competitive Region 8-AAAAA, where Clarke Central (the Wildcats’ first scheduled region opponent on Oct. 2) is widely considered the front-runner and a strong contender for the state title. But even with the heavy toll exacted by graduation, Lotti feels like his core group of players who are entering year three with him along with the strength of a still-intact coaching staff can help offset some of that loss.

“We’ve all spent a lot of time together and we’re at the point where maybe a different mindset starts to happen,” Lotti said. “In your first year, you have to ask the kids who are seniors to immediately buy into what you’re selling right away, but now we’re at the point where I think we’ve been able to change the culture and mindset and get closer to where we want to be. It hurts to lose some of the guys we’ve lost, and you never fully know about some of the newer players until the lights come on, but I’m feeling good about where we’re at. I think you can go right down the list of the teams in this region and know that everyone in there is going to give you a dogfight every week.

“But I think if you talk to all the coaches in this region, every one of us for now is trying to take this whole thing one day at a time.”