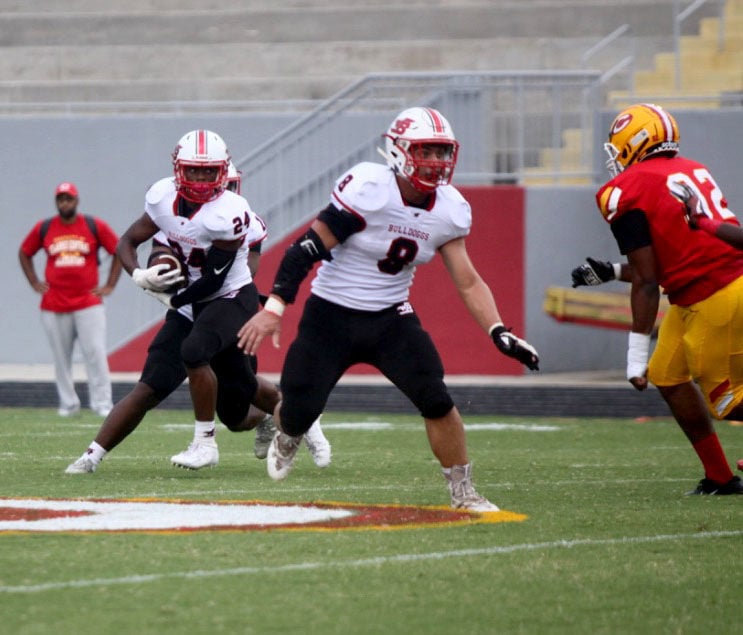 Winder-Barrow will rely heavily on seniors J.C. Green (24) and Chandler Maxwell (8) out of the backfield this season. 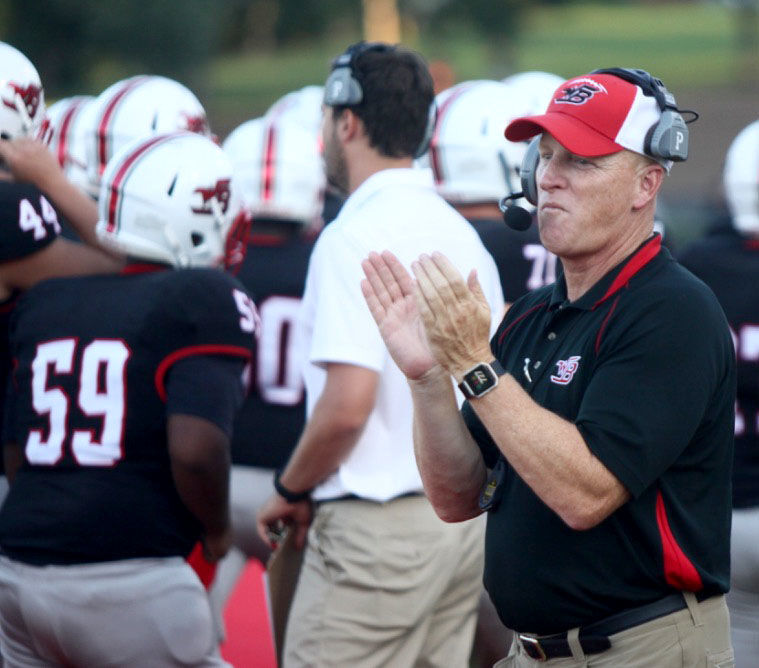 Winder-Barrow head coach Ed Dudley is entering his third year with the Bulldoggs, which begins Friday, Sept. 4, when they travel to crosstown rival Apalachee for their season opener. 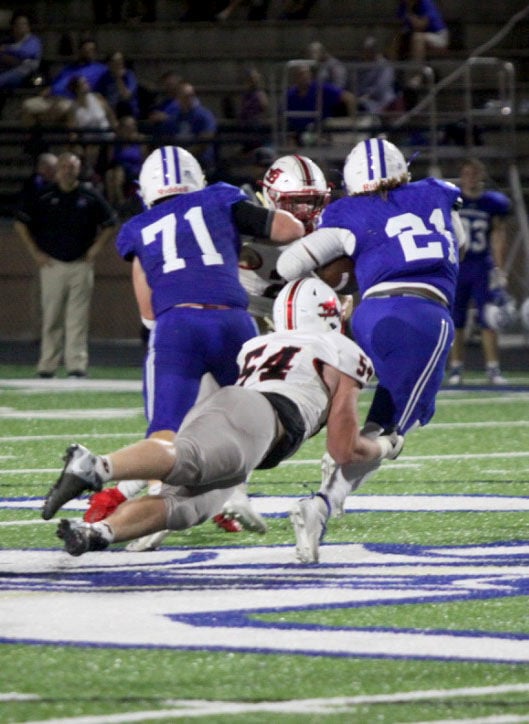 Winder-Barrow will rely heavily on seniors J.C. Green (24) and Chandler Maxwell (8) out of the backfield this season.

Winder-Barrow head coach Ed Dudley is entering his third year with the Bulldoggs, which begins Friday, Sept. 4, when they travel to crosstown rival Apalachee for their season opener.

Winder-Barrow head football coach Ed Dudley has been around the game a long time, and, like his peers, he’s never been part of a situation like the coronavirus pandemic that threatens part of or the entire season.

It’s a new reality the Bulldoggs and all the other teams around the state are having to contend with: The season will start Friday, Sept. 4, but any game could be their last. But Dudley said the way his team has handled the uncertainty the past few months has “really restored my faith in young people.”

“It’s just amazed me how resilient our players are,” said Dudley, who is entering his third year at WBHS and has amassed a 198-102 record in 26 seasons overall as a head coach. “With all the negativity swirling around out there over whether we’ll have a season, they’ve consistently shown up here to practice and prepare and have just shown an amazing level of maturity about staying smart and safe.

“With every football team, every season, every coach, it’s all about managing each situation coming up, and we’re focused on playing games. These guys have worked so hard and they just want to play. There are a lot of things that hang in the balance with a season, and it’s not just about scholarship opportunities for your seniors. There’s a lot of personal growth and memories made.”

As the Bulldoggs prepare to open the 2020 campaign Friday night at crosstown rival Apalachee, they enter the season looking to get back to the playoffs for a second straight year, but also improve on a 3-7 mark from a year ago. To do that, they’ll have to replace the graduated players who accounted for a large part of their offensive production and, Dudley said, improve significantly on the defensive end.

Winder-Barrow didn’t have the benefit of a spring practice to begin to nail down some of the open spots and wasn’t able to get its preseason scrimmage at Gainesville in due to the GHSA’s decision to cancel all scrimmages. Still, Dudley feels good about his team’s chances to be competitive and find itself back in the postseason come late November.

“We’ve got a small-in-numbers, but strong-in-character group of seniors who have done a fabulous job in the leadership department,” he said. “Chemistry and senior leadership are those intangibles that show up and are very much tangible on Friday nights. We’ve got a sophomore class that we feel like is going to be very strong for us — some really good players in that group. But we’re still a very young team overall, and we’re going to have to make up with hustle and enthusiasm what we lack in experience.”

Chief among the voids to fill is at quarterback, where the team must find a way to replace what dual threat Jhaydon Sullivan (now at Albany State) did at the position last fall (1,441 passing yards and 11 touchdowns, to go along with 724 rushing yards and 13 more scores). And that could be where the team was hurt most by not having a spring practice and traditional summer program.

Junior Trevor Summerfield, Sullivan’s backup, is the frontrunner for the job and likely week one starter, though Dudley said there has been a tough and tight competition with sophomore Conyer Smith throughout preseason camp.

The Bulldoggs also have to replace graduated wide receiver Brett Landis, who caught 55 balls and seven of Sullivan’s 11 touchdown passes. Junior Stewart Allen will be counted on to be a top target, while junior Logan Thayer and freshman Tre Gaudlock are also expected to contribute.

As the quarterbacks and receivers look to get their timing down and adjust to the speed of the varsity game, Winder-Barrow will rely heavily on senior running back J.C. Green (893 yards, nine touchdowns as a junior) along with senior Chandler Maxwell and sophomore Aidan Thompson contributing carries to take the load off the passing game.

“We’re not going to turn the clock back to 1955 or anything, but probably early in the season we’re going to be a lot more conservative to allow those guys to grow into the role,” Dudley said.

Merrifield, a Florida Atlantic commit as a defensive end who has been on Division I teams’ radars throughout his high school career, is back after registering 66 tackles and six sacks as a junior and will again lead a defensive line that is still looking to round out the starting rotation up front. Senior Zac Dean, Juniors Gabe Donnelly and Logan Roberts, and a large contingent of sophomores (Jacob King, Emorrie Foskey, Herr and Deeriah Smith) are getting reps. How well that group progress will likely dictate the overall improvement of the defensive unit, which allowed more than 36 points a game last season.

Despite the loss of leading tacklers Nate Allen and Carson Jackson, Dudley said the Bulldoggs have a “good crew” of linebackers with Chandler Maxwell, senior Timmy Presley and Thompson leading the way with sophomores Dylan Gmerek and Brooks House and juniors Joel Pichardo and Daniel Pineda also in the mix. Green (strong safety) and Drew Lewis are also returners in the secondary, while Allen and juniors Alex Cha and J. Smith will be counted on to replace corners Zack Price and Demarcus Beauford, and junior Omarius Smith will contribute at safety.

And, along with getting the passing game going and improving on defense, the Bulldoggs will have to compensate for the loss of four-year kicking specialist Harlin Brown.

“That might actually be the biggest loss. Those are big shoes to fill because Harlin’s ability to put us in great position helped us pick up some wins and get in the playoffs last year,” Dudley said, adding that sophomore Ivan Rodriguez and Atkinson are the leading contenders to handle kicking duties while Thompson or Chandler Maxwell will be the primary punter.

Dudley hopes to see many of those questioned answered in the Bulldoggs’ first four games before they open Region 8-AAAAAA play Oct. 9 against Habersham Central. Along with Habersham and Lanier, Dacula, the four-time defending champion and a state semifinalist the last two years, remains on the region slate, while the newly-aligned region welcomes Central Gwinnett, Shiloh and perennial powerhouse Buford, the reigning 5A champion which has won 11 state titles in 19 seasons across five classifications.

“It’s kind of like we’re playing in the SEC West of high school football,” Dudley said. “But we can’t shy away from it, and we can’t be afraid. We’re excited for the opportunity that’s in front of us, and we're going to continue to work to put ourselves in a position to be successful.”