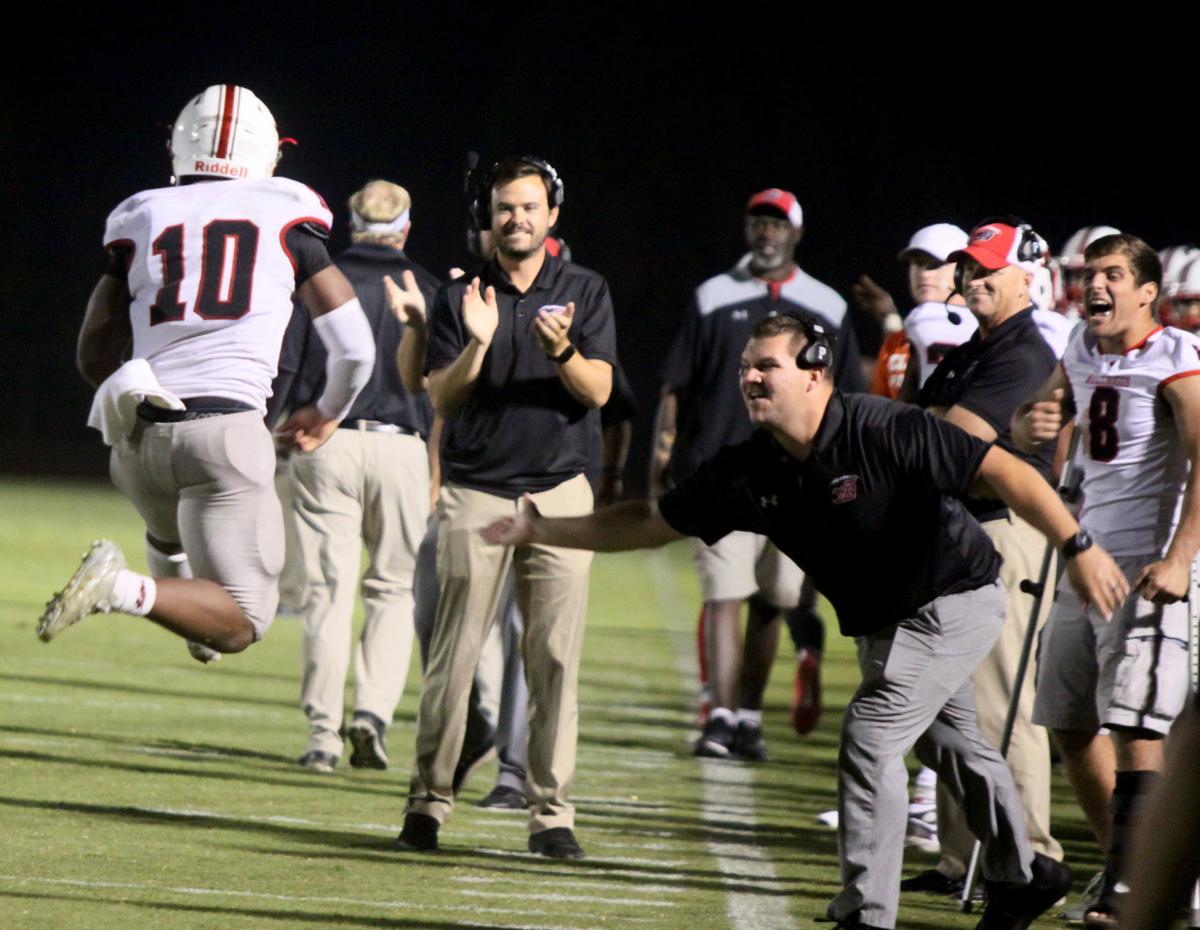 Winder-Barrow quarterback Jhaydon Sullivan (10) celebrates after a two-point conversion following his go-ahead touchdown run in the fourth quarter at Loganville on Friday. 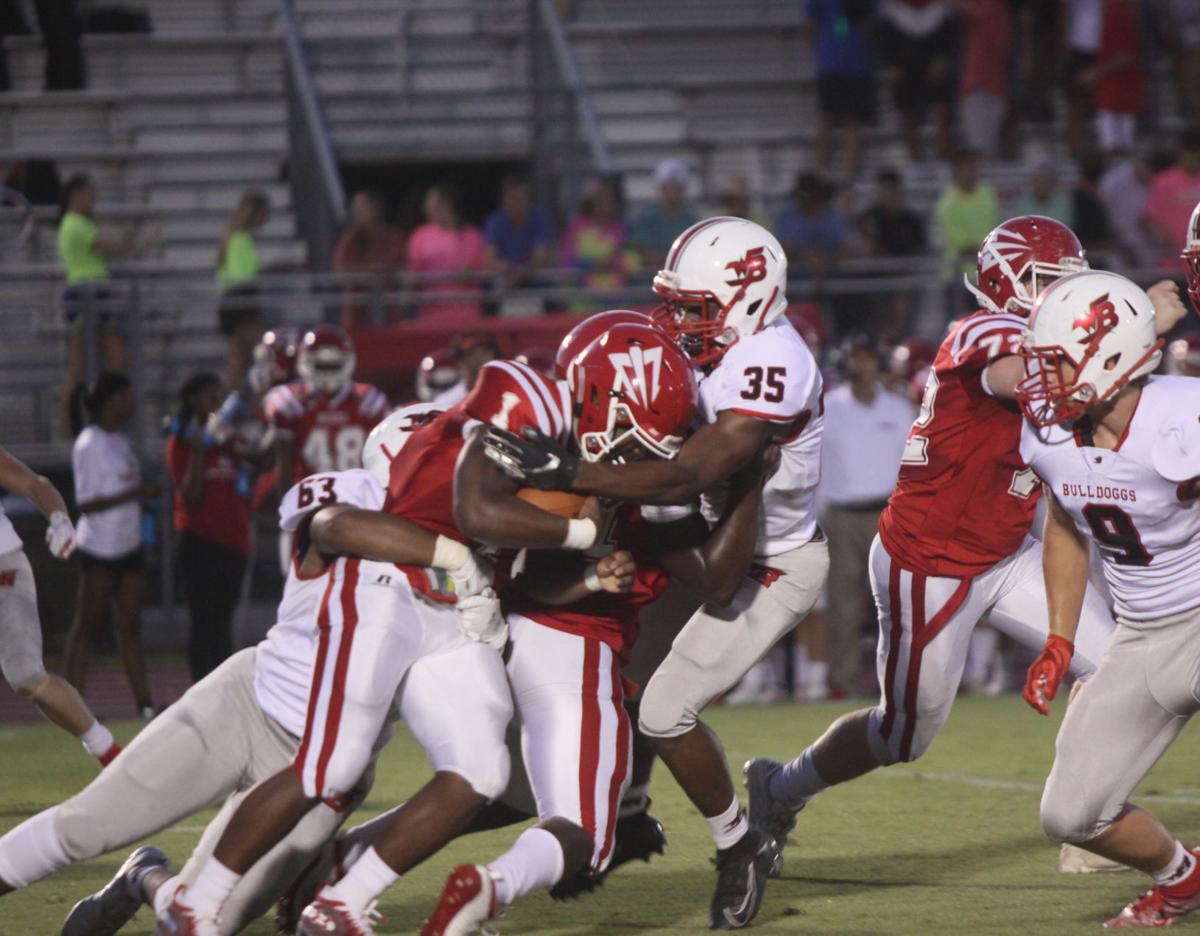 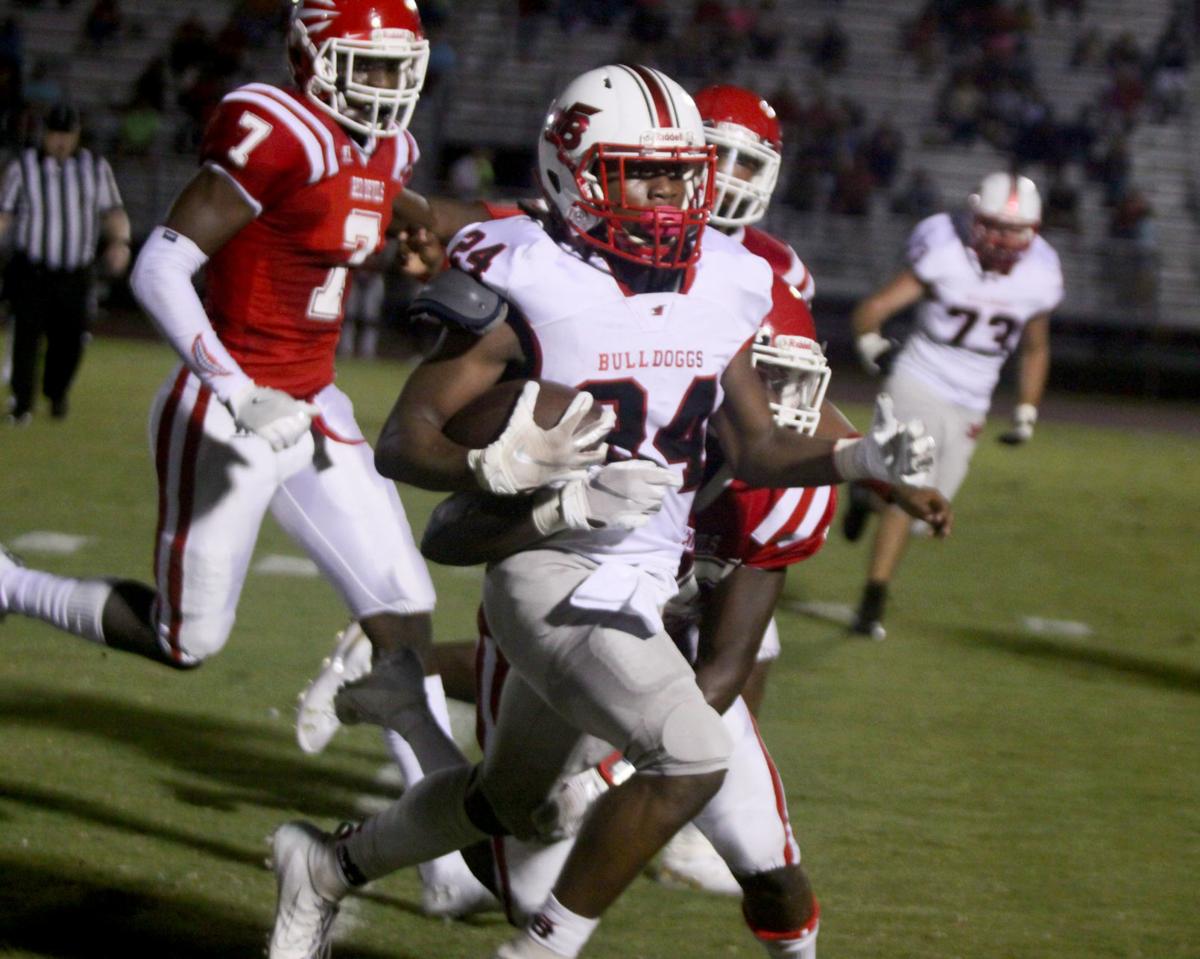 Winder-Barrow's J.C. Green runs for a big gain against Loganville. 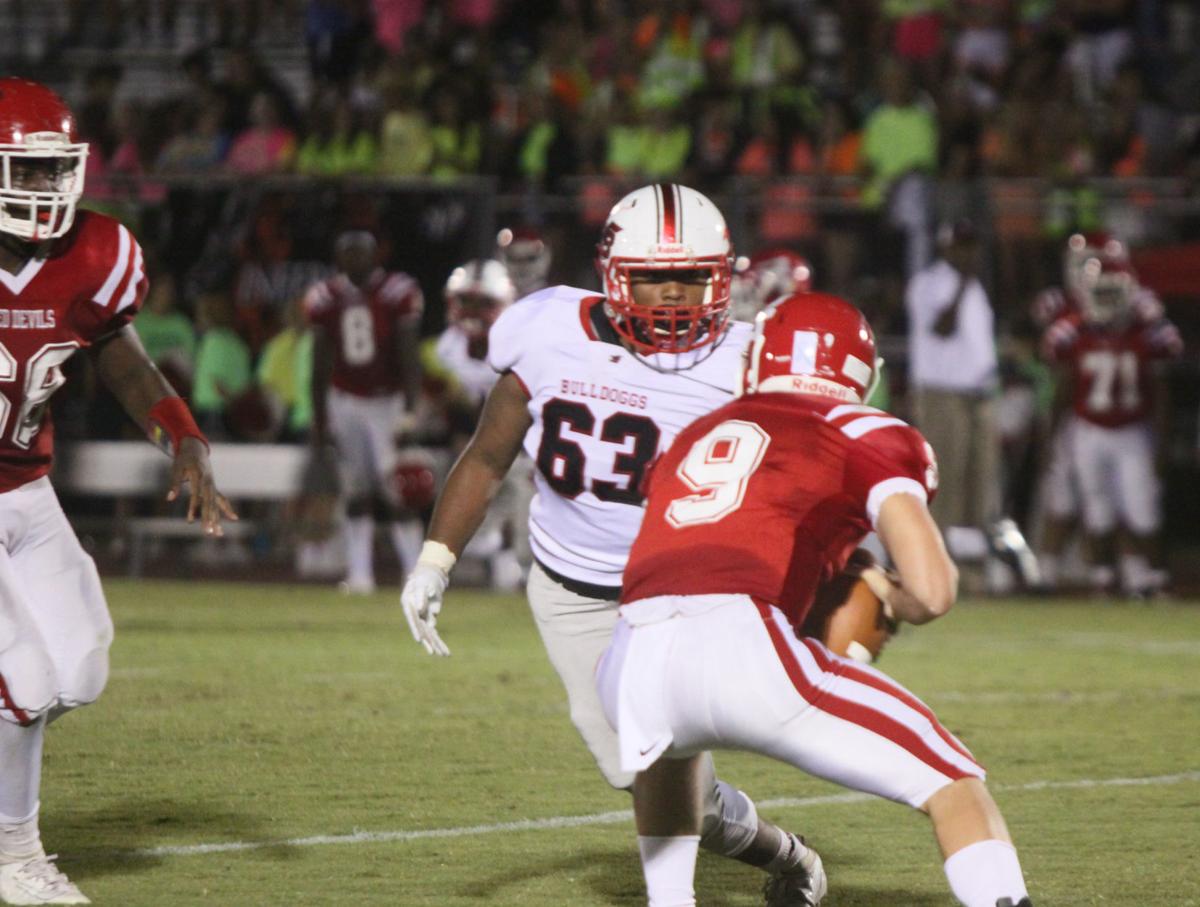 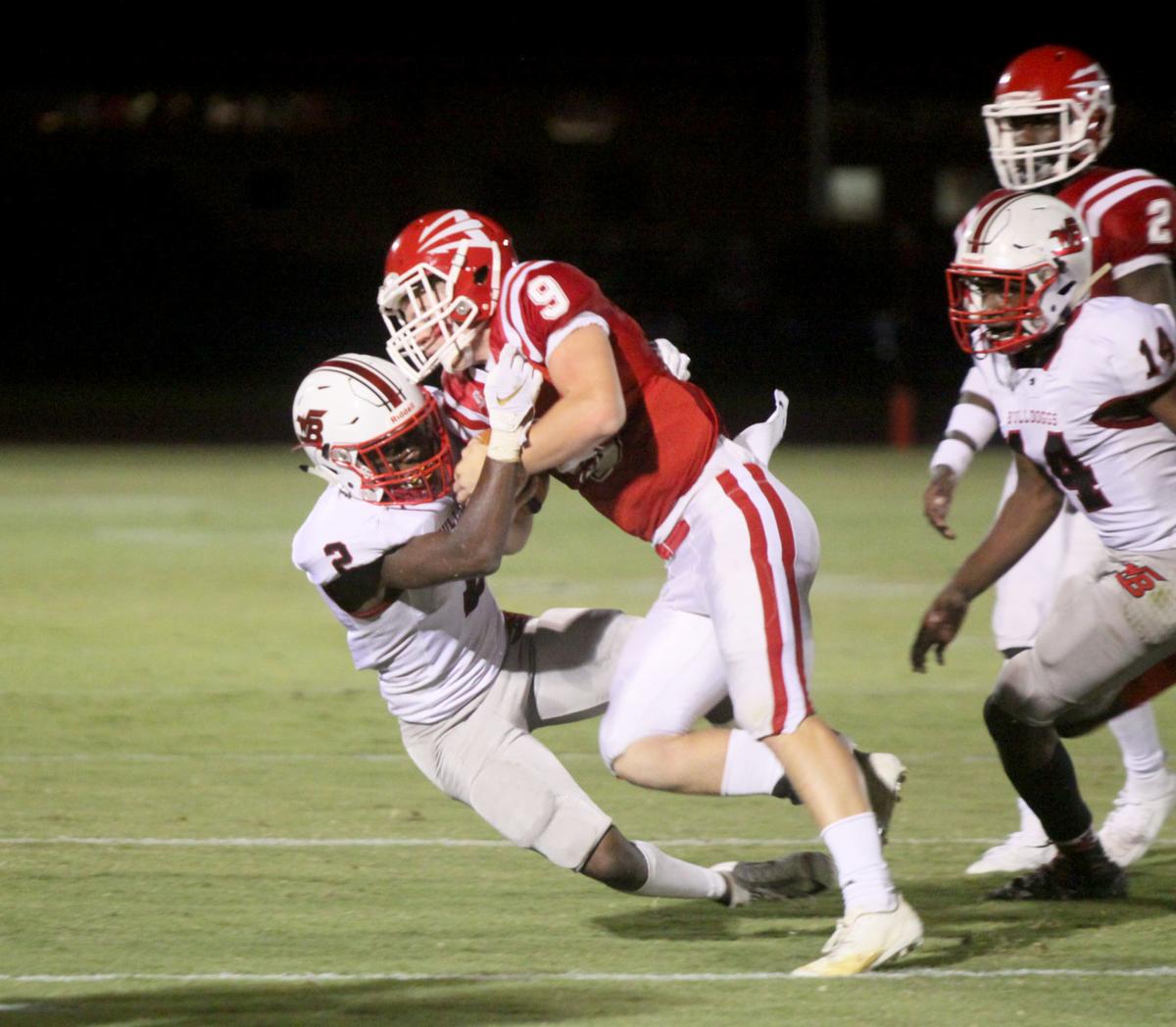 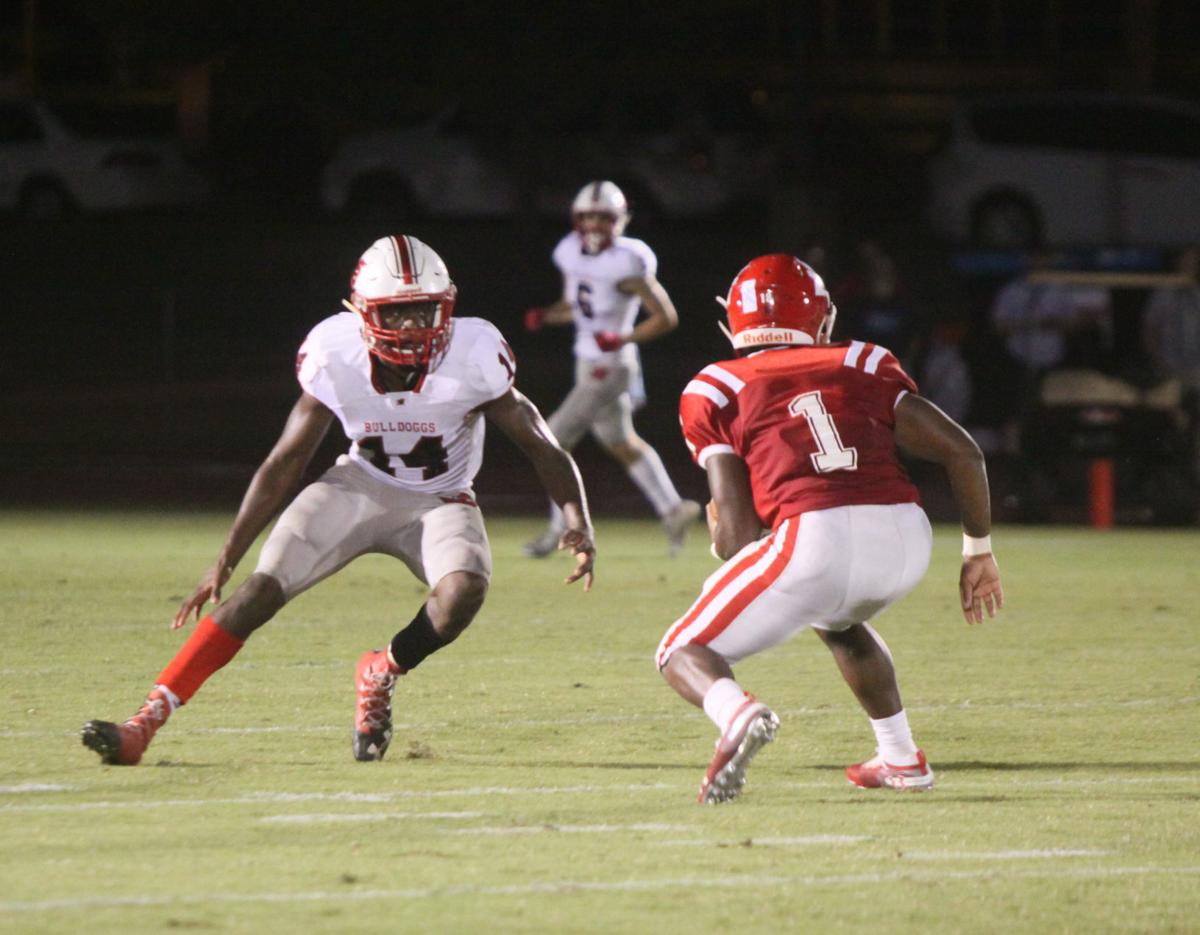 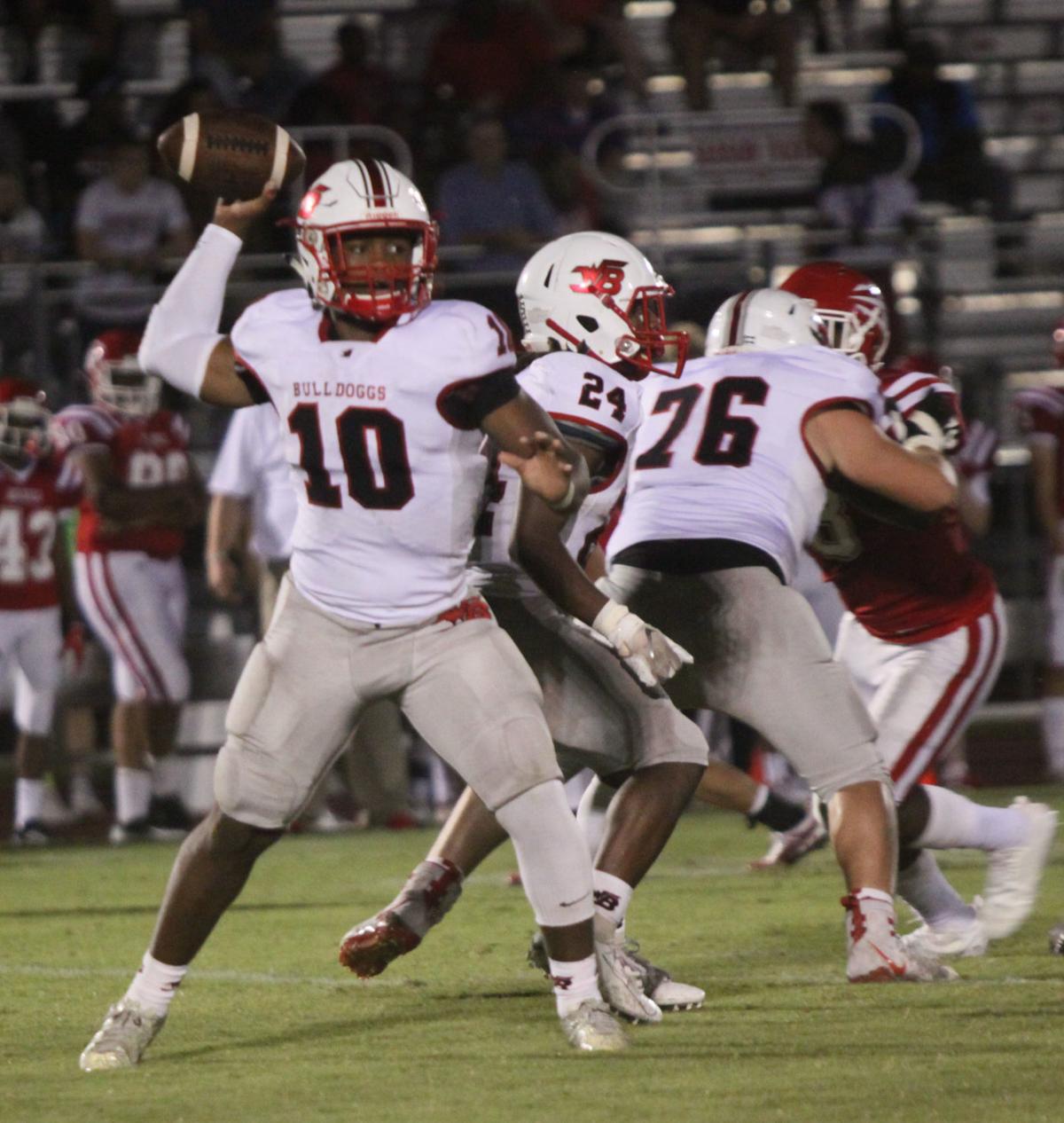 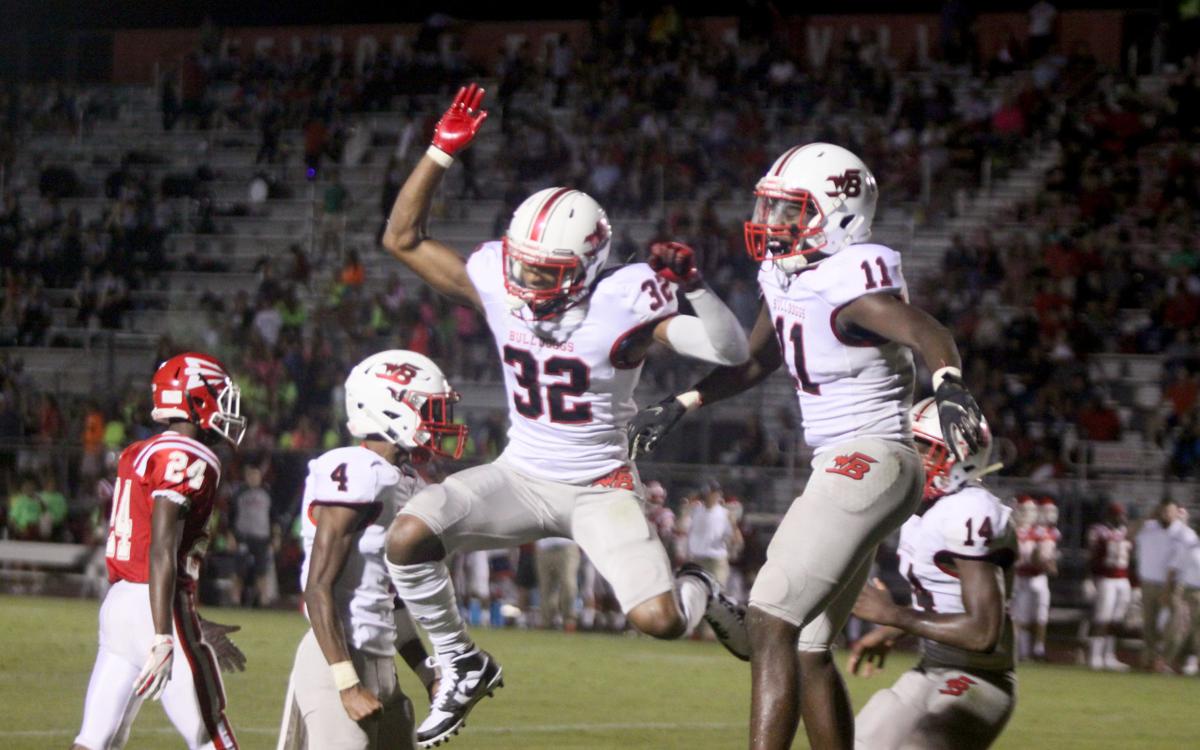 Winder-Barrow's Andrew Lewis (32) and Timmy Presley celebrate Presley's sack for a safety in the third quarter. 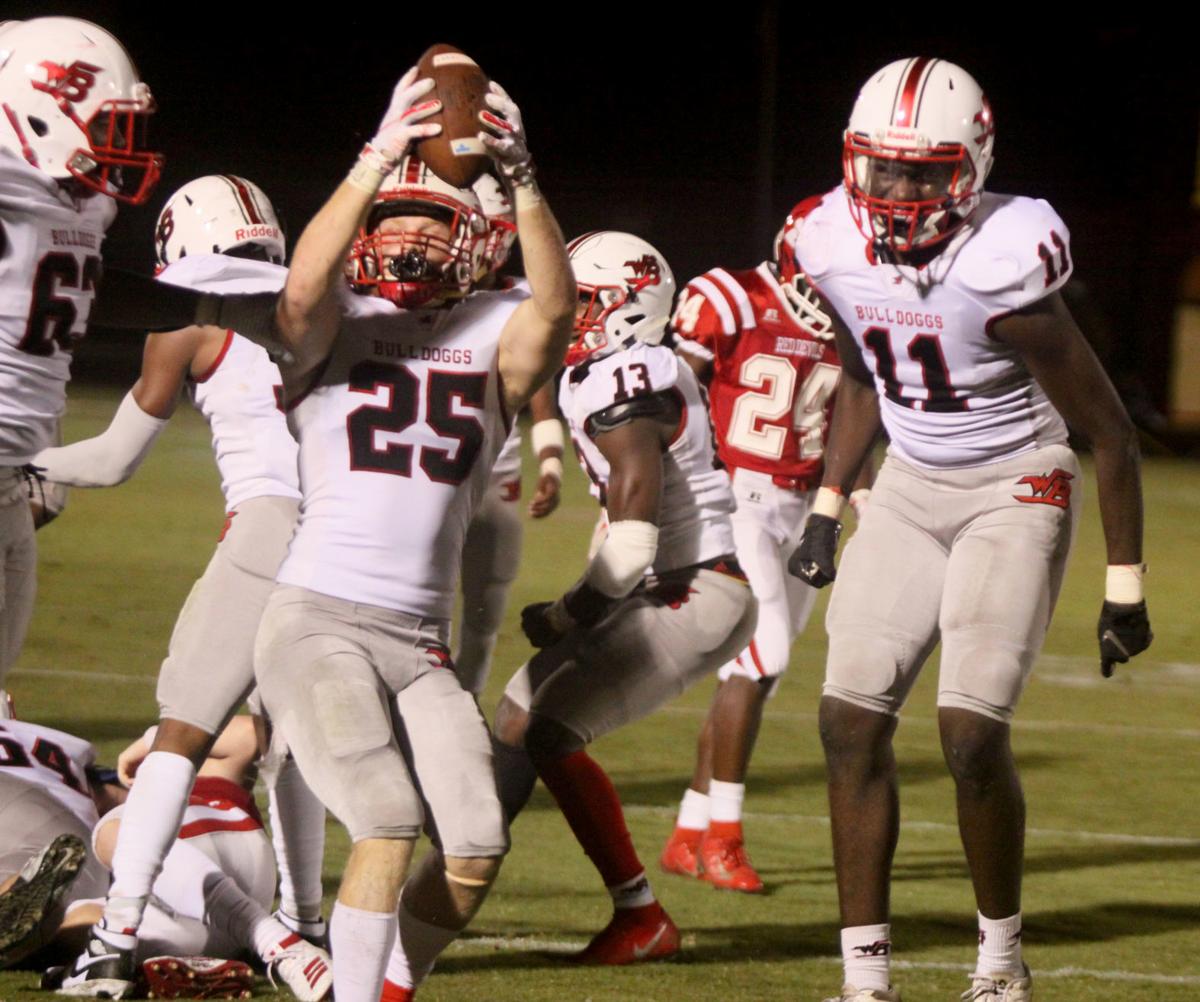 Winder-Barrow's Carson Jackson comes up with a fumble recovery in the third quarter. 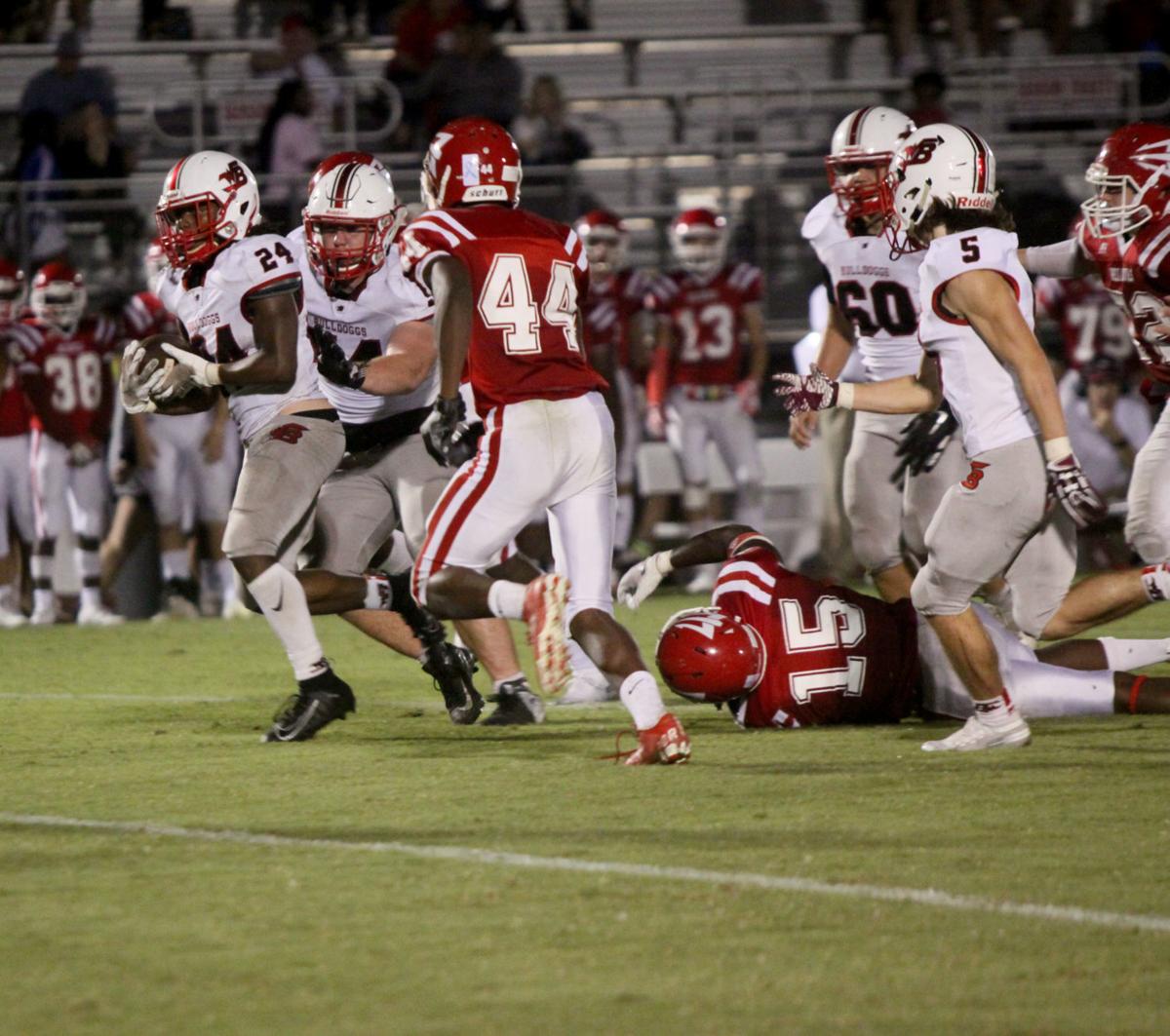 Winder-Barrow's J.C. Green breaks through for a big gain. 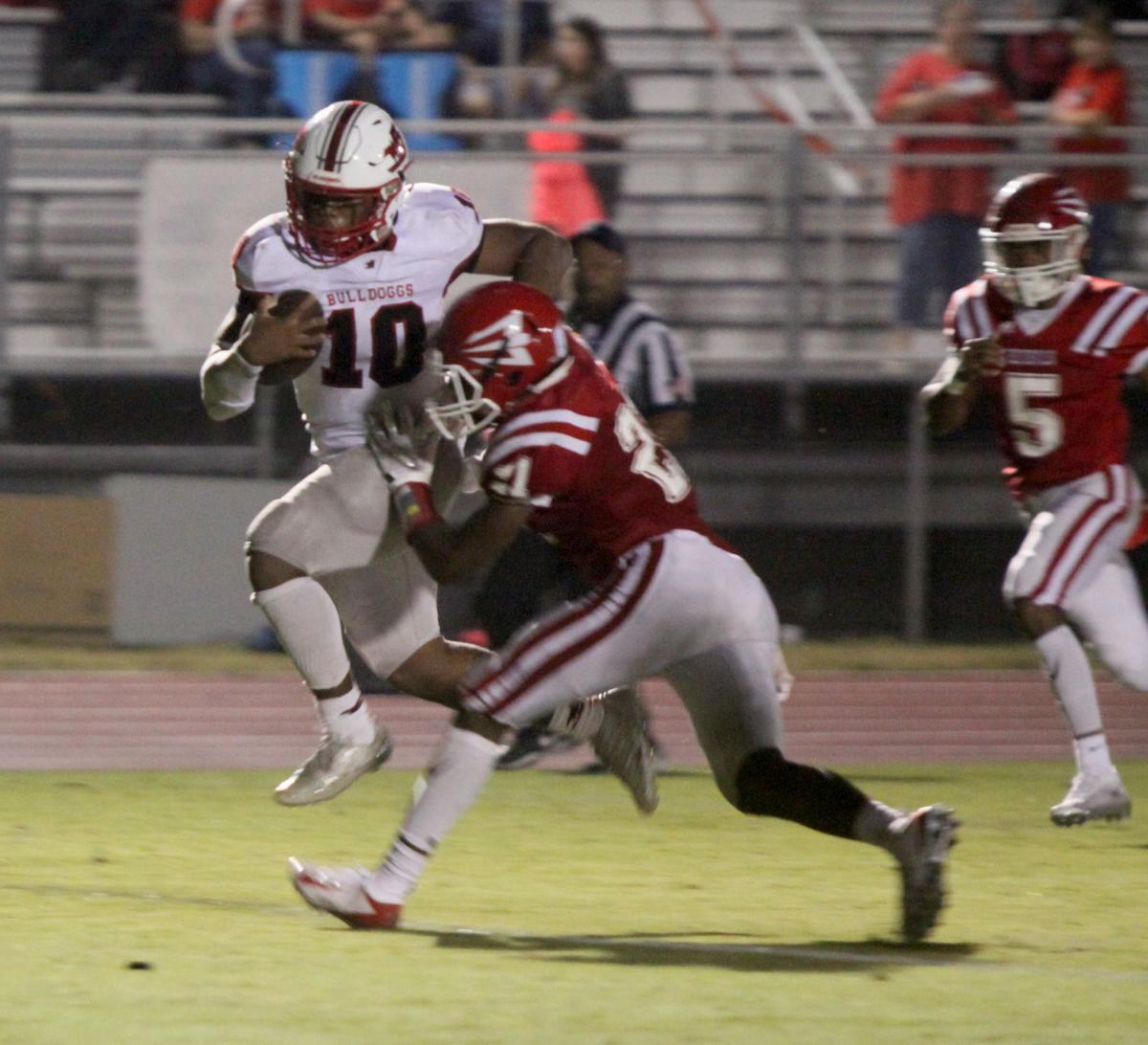 Winder-Barrow senior quarterback Jhaydon Sullivan crosses the goal line for the eventual game-winning touchdown in the fourth quarter against Loganville. 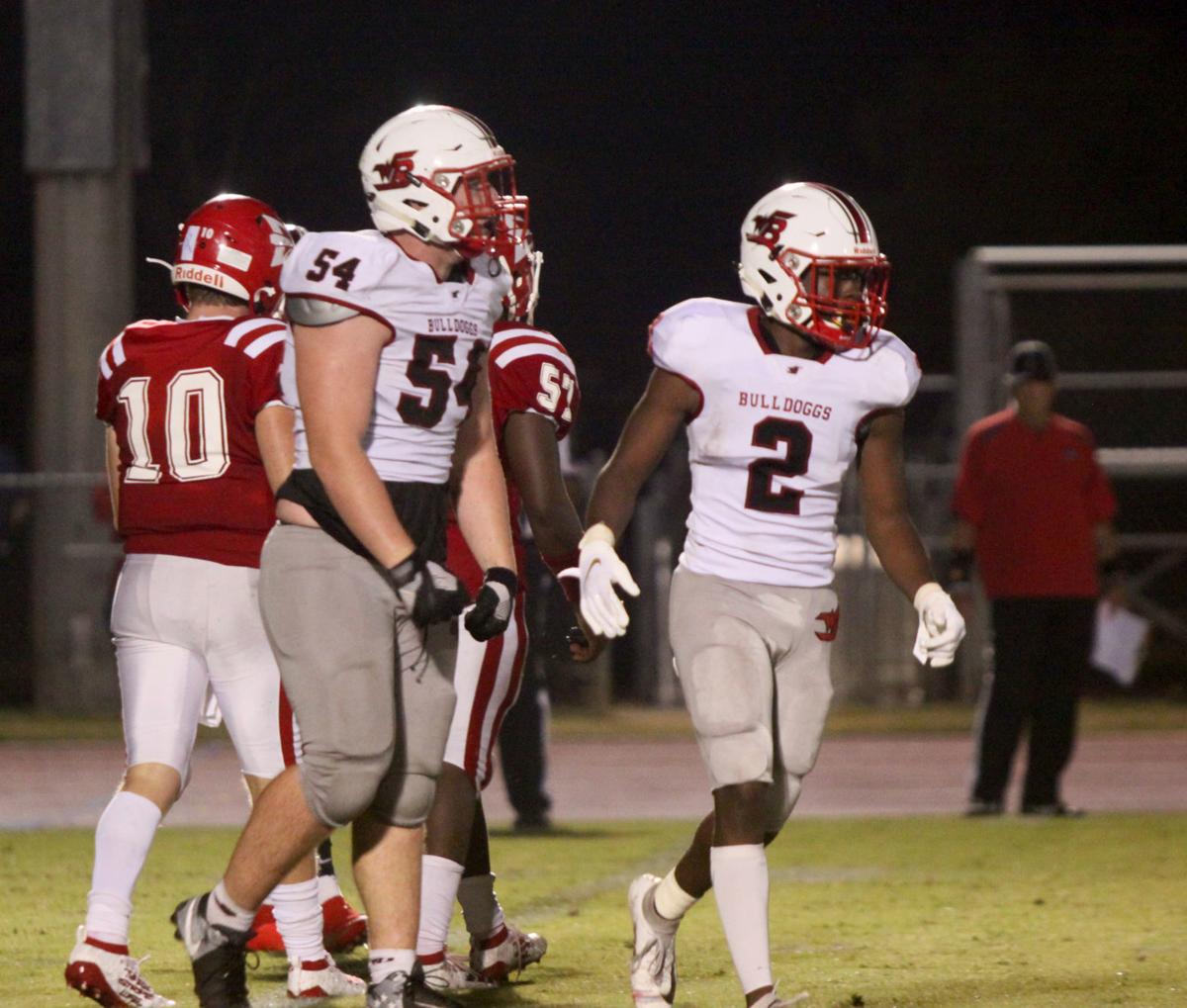 Winder-Barrow quarterback Jhaydon Sullivan (10) celebrates after a two-point conversion following his go-ahead touchdown run in the fourth quarter at Loganville on Friday.

Winder-Barrow's J.C. Green runs for a big gain against Loganville.

Winder-Barrow's Andrew Lewis (32) and Timmy Presley celebrate Presley's sack for a safety in the third quarter.

Winder-Barrow's Carson Jackson comes up with a fumble recovery in the third quarter.

Winder-Barrow's J.C. Green breaks through for a big gain.

Winder-Barrow senior quarterback Jhaydon Sullivan crosses the goal line for the eventual game-winning touchdown in the fourth quarter against Loganville.

LOGANVILLE — In the hectic and jubilant aftermath of Winder-Barrow’s second-half come-from-behind victory at Loganville on Friday, Sept. 20, the Bulldoggs ran to the marching band, which was coming onto the field to play its regular halftime show — a performance that was delayed so Loganville could recognize its three-time defending state championship baseball team.

Before the band could get on the field, it stopped to play the school’s fight song as the football players swarmed around.

“They might not ever get back over here,” said Winder-Barrow coach Ed Dudley, watching the celebration after his team scored 27 unanswered points (24 after halftime) to win 34-21 and pick up its first victory of the season. “That’s OK, though. These guys deserve it. It’s been a while.”

Friday’s contest was a tale of two halves as the Bulldoggs (1-2) struggled to come up with an answer to Loganville’s explosive offense in the first half, surrendering over 300 yards and falling behind 21-10 at the break. But in the second half, the Winder-Barrow defense played with its hair on fire, allowing just 48 yards. The Bulldoggs didn’t allow a first down in the second half until Loganville’s final drive of the game — a 45-yard pass that got the Red Devils down to the Winder-Barrow 15 — before Brett Landis’ interception in the end zone sealed the victory.

In the meantime, Winder-Barrow’s offense got rolling, churning out 176 rushing yards after the break. Senior quarterback Jhaydon Sullivan ran for 128 yards on 20 carries and three touchdowns on the night, including the eventual game-winner from 14 yards out with 10:11 remaining in the game. Junior running back J.C. Green added 172 yards on 26 carries and a fourth-quarter score.

The win snapped Winder-Barrow's eight-game losing streak dating back to last season, when the Bulldoggs beat Loganville at home to improve to 2-2 before losing six in a row down the stretch.

“Big credit to our defensive coaches for making the adjustments at halftime,” Dudley said. “We had to get out of our regular, base 3-5 defense and go to a 4-3 and get a little more pressure on the quarterback. We missed a bunch of tackles in the first half. Give credit to Loganville; they’re an explosive team. But what we talked about was just settling down and tackling.

“We won the field position battle in the second half. It was an opportunity for a team that had lost a couple games to really drop down and fold, but they rallied and I thought it was really cool.”

Winder-Barrow received the second-half kickoff and marched 68 yards in nine plays with Sullivan scoring on a 3-yard keeper to trim the deficit to 21-17 with 8:26 left in the third quarter. The Bulldoggs couldn’t move the ball on their next possession, but senior kicking specialist Harlin Brown perfectly placed a 50-yard punt at the Loganville 1 to back the Red Devils (0-4) into a hole. The defense took advantage of that opportunity two plays later when junior Timmy Presley broke through and sacked Loganville quarterback Tanner Greene in the back of the end zone for a safety to cut the Red Devils’ lead to 21-19 with 2:46 left in the third.

“Oh my Gosh, what a huge play for us,” Dudley said of Brown’s punt before showering praise on Presley, who finished with seven tackles on the night. “He really has come on strong for us this year and he gets better every week out there. He’s a very long kid, a really good athlete, and the sky’s the limit.”

The Bulldoggs had to punt it away again on their next possession, but they got their second of three takeaways on the night when Carson Jackson stripped the ball away on a scramble by Greene on the final play of the third quarter, giving Winder-Barrow the ball at the Loganville 34. They needed just four plays to grab the lead as Sullivan kept on the midline option for the 14-yard score and then scored again on the two-point conversion to make it 27-21.

Winder-Barrow’s defense stymied Loganville once again on the next drive. Junior defensive end Jacob Merrifield’s sack of Greene on third down resulted in a 14-yard loss and pinned the Red Devils back in their own end zone for a punt. The Bulldoggs took over at the Loganville 39 and ate up nearly five minutes of clock on an eight-play drive that essentially salted the game away.

Green was the star of the possession, running for 16 yards, catching a 15-yard pass from Sullivan in the flat that got the ball down to the 4 and then punching it in from there to make it 34-21 with 3:15 to go.

Green and Sullivan “were steady all night long and did a very good job running the ball, with good execution,” Dudley said. “I can’t say enough about these guys being resilient, hanging in there and never, ever letting down.”

Winder-Barrow will be back in action Friday, Sept. 27, at Oconee County, in its final non-region contest before opening GHSA Region 8-AAAAAA play Oct. 4 at home against crosstown rival Apalachee.