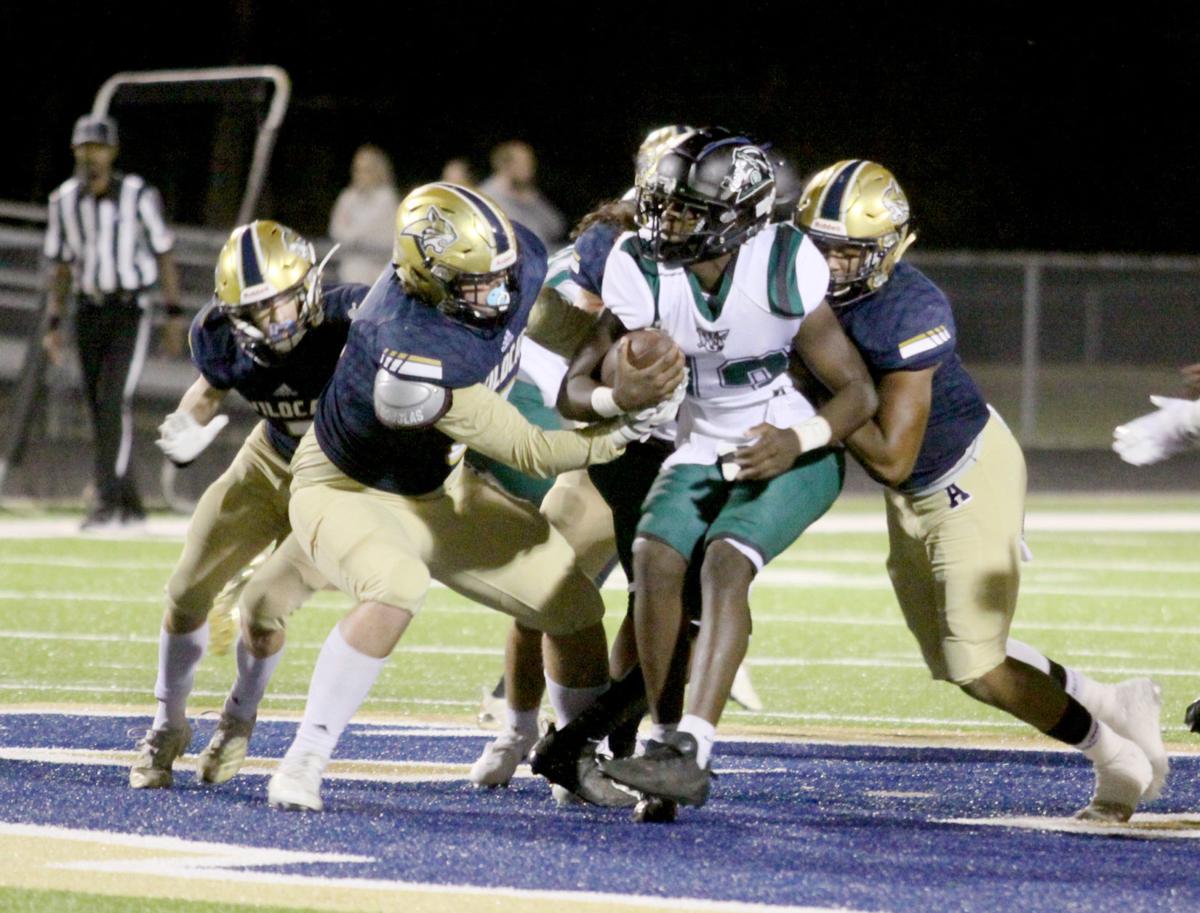 The Apalachee defense has been strong the last two weeks in helping the Wildcats inch closer to ending a 12-year postseason drought. The Wildcats travel to Loganville on Friday, Oct. 29, for a key GHSA Region 8-AAAAA battle. 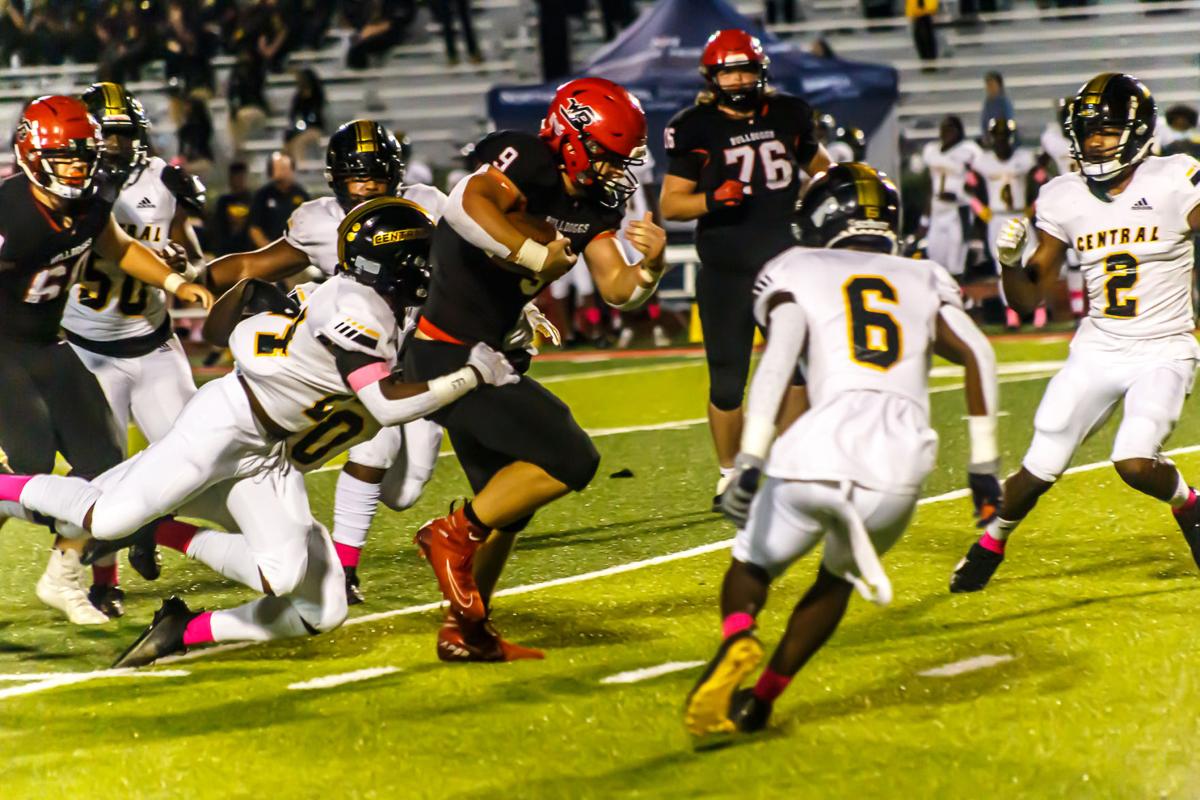 Aidan Thompson and Winder-Barrow will look for another productive night on offense Friday as the Bulldoggs take on top-ranked Buford, which has shut out its last four opponents.

The Apalachee defense has been strong the last two weeks in helping the Wildcats inch closer to ending a 12-year postseason drought. The Wildcats travel to Loganville on Friday, Oct. 29, for a key GHSA Region 8-AAAAA battle.

Aidan Thompson and Winder-Barrow will look for another productive night on offense Friday as the Bulldoggs take on top-ranked Buford, which has shut out its last four opponents.

Apalachee’s upcoming game set for Friday, Oct. 29, at Loganville, presents a situation that Tony Lotti, his coaching staff and players have been working toward since he took over the program in 2018.

The goal all along has been for the team to get over the hump and end a state playoff drought that stretches back to 2009, and, on the back of a strong second half, the Wildcats are in a position to do that as soon as this week. A win over the Red Devils on Friday, coupled with a Jackson County loss to Greenbrier, would clinch a postseason berth, and wins in their final two regular-season games against Loganville and Jackson County next week would give them a chance to finish second in GHSA Region 8-AAAAA and host a first-round playoff game.

But, before they get ahead of themselves, Lotti knows the team still has challenges to overcome, starting with this week’s matchup against a desperate Loganville squad in need of a win to stay alive in the postseason hunt.

“It’s going to be a real tough hurdle to go over, and our guys know that,” Lotti said. “We’ve put ourselves in a good position here, but it’s going to be important that we play well. (Loganville is) really talented, with a lot of good skill players, and they’re big up front. It’ll be a tall task.”

Apalachee (3-5, 3-2 region) has put itself in the position Lotti is referencing by winning three of its last four games, including the last two where the Wildcats have outscored their opponents 77-7 and dominated offensively, defensively and on special teams. The team’s Wing-T offense has hit its stride with seniors Colby Sikes and Jeff Roberts and sophomore Prince Tate making for a reliable trio for quarterback Isaiah Skinner, a threat to run himself, to distribute the ball to. And the defense has been lockdown the last two weeks, smothering opponents and giving the offense a short field to work with and take advantage of.

Meanwhile, Loganville (3-5, 2-3) has mostly been going in the opposite direction of late, losing its last three games to slip on the brink of elimination, though they are coming off a near upset of the region’s top team, Clarke Central. Senior running back Avery Hamilton (749 rushing yards at 6.9 a carry and seven touchdowns) has been the team’s main source of offense, while quarterback Cooper Kennedy, also an all-region safety from last year, is a dual-threat.

On top of the talent they still have on paper, Loganville’s back being against the proverbial wall is what Lotti believes makes the Red Devils a really dangerous opponent this week for his team, which is still searching for its first road victory this year.

“It’s important that we try to get over that (winless road record) this week,” Lotti said. “And they’ll have that extra motivation, too. It’s kind of like each week where we’re going to have to stop the run and defend the pass and play disciplined. I fully expect them to try to keep us off balance and hit us quick for some big plays. For us, we’ve got to stay consistent and clean and not do anything to play into their hands.”

For most programs in Georgia, going up against a juggernaut like defending 6A champion Buford (which won the 5A crown in 2019 and is vying for its 13th state title in 21 seasons) gives them a chance to evaluate and gauge where they stand against what has become a national powerhouse. And that’ll be no different for Winder-Barrow on Friday when it welcomes the top-ranked Wolves to W. Clair Harris Stadium for a Region 8-AAAAAA battle.

The Bulldoggs (4-4, 2-2 region) are coming off a bye week that followed a 35-7 win against Central Gwinnett where they showed life again offensively after lackluster performances against Dacula and Shiloh and stayed right in the mix for a third straight playoff berth with this week’s game and next week’s key matchup at Lanier, the regular-season finale lingering.

Buford (7-1, 4-0) comes into Friday’s game averaging almost 36 points a game on the year while allowing a shade under 7 points, but it has kicked it into another gear against region opponents. Since a 7-0 loss to Chaminade-Madonna (Florida) on Sept. 17, the Wolves have posted four straight shutouts — all in region play, including a 56-0 thumping of Lanier last week — and have averaged 48 points on that span.

A daunting challenge for sure, but, for Dudley, it all comes down to what his own team can control.

“You really have to be able to execute your normal offense and defense against a team like Buford,” he said. “If you go in thinking you’re going to blitz every play and really just disrupt what they can do, you’re going to make mistakes that they’ll feast off of. If you think you can run a bunch of tricks on them offensively, it’s just not going to happen. So, for us, we’ve got to get better at blocking and tackling and limit their yards after contact and yards after catch because they make big plays off of those.

“Defensively, we’ve been really strong most of the year and I’m proud of that unit. And offensively, to have a chance against them, we’ve got to find ways to move the ball. At the end of the day, our kids and coaches want to play the very best competition, and we’re looking forward to seeing what we can do this week.”

Bethlehem Christian Academy ran into the meat-grinder portion of its schedule the last two games with blowout losses to a pair of defending GISA state champions, including a 53-14 thumping at the hands of two-time reigning AAA title holder John Milledge Academy.

The Trojans jumped out to a 47-0 halftime lead behind a potent rushing attack and had the game well in hand before BCA notched touchdowns on a pass from Ben Reed to Ty Whiting and a run by David Walterhouse.

But, despite being outscored 93-28 over the last two weeks and seeing their AAA power ranking drop to seventh — GISA is using the MaxPreps computer ratings system to determine playoff seeding and will take the top 10 teams in the final rankings — BCA coach Bruce Lane believes his team is still well-positioned as the Knights enter their final two regular-season games, including an important and difficult test at Westfield School on Friday night in Perry.

“Every time you go out and play somebody, you learn something about yourself, and, while we’ve improved, we’ve still got to trust the process of trying to build a culture of winning here,” said Lane, whose team now stands at 6-3 overall. “We’ve learned, playing against two programs that have long been established, that there’s a process you have to go through in getting there. We’ve made some progress. We’re sitting here with six wins. All of our goals are still in front of us to win more games than any other team in school history, to make the playoffs, and possibly host and win a playoff game.

“I think it’s good to play folks like we have the last two weeks, and, like I told those teams in the post-game huddles, those are the programs we’re trying to emulate here.”

BCA will face another one of those “established” programs Lane talks about in its trip to Westfield this week. The Hornets (6-1) have been rolling lately with five straight victories, including a 50-14 rout of Creekside Christian last week, and have averaged 40.6 points during that span.

Junior quarterback Hunter Kirkley, a Dodge County transfer, has thrown for 1,038 yards and 14 touchdowns while completing 62% of his passes and also has 12 rushing touchdowns under his belt while racking up 516 yards on the ground at a clip of 8.3 yards a carry. Senior Porter Faulk leads the team in rushing with 743 yards and eight touchdowns and has touchdown reception, while senior Noah Blackmon (23 catches, 6 touchdowns) has been Kirkley’s top receiving target.

“The quarterback is the trigger guy who makes things go, and they’ve got a solid offensive line that can put some stress on you,” said Lane, who was Westfield’s head coach prior to joining BCA and will make his first trip back there since leaving following the 2019 season.

“I love those kids down there and am happy to see them continue to have success. They’ve got a great fan base,” said Lane, who will look for his new team to get a massive victory to help with playoff positioning. The Knights enter this week rated seventh in AAA, which would put them on track to host a first-round game in the 10-team field. But losses to the Hornets and Creekside the final two weeks would lessen that possibility and could jeopardize their playoff chances altogether.

“Our kids have prepared really well. We really haven’t had a bad practice this year, and our attitude has been great despite coming off two bad losses,” Lane said. “We’re at the point as a program where we’re still worrying about ourselves in our preparations. We can’t control our opponent’s skill level, depth or size, but we can control our effort and attitude. We know we could fall completely out of the picture if we don’t take care of our business, but that’ll all sort itself out. We just have to make sure we’re playing fundamentally sound, with effort and enthusiasm.”