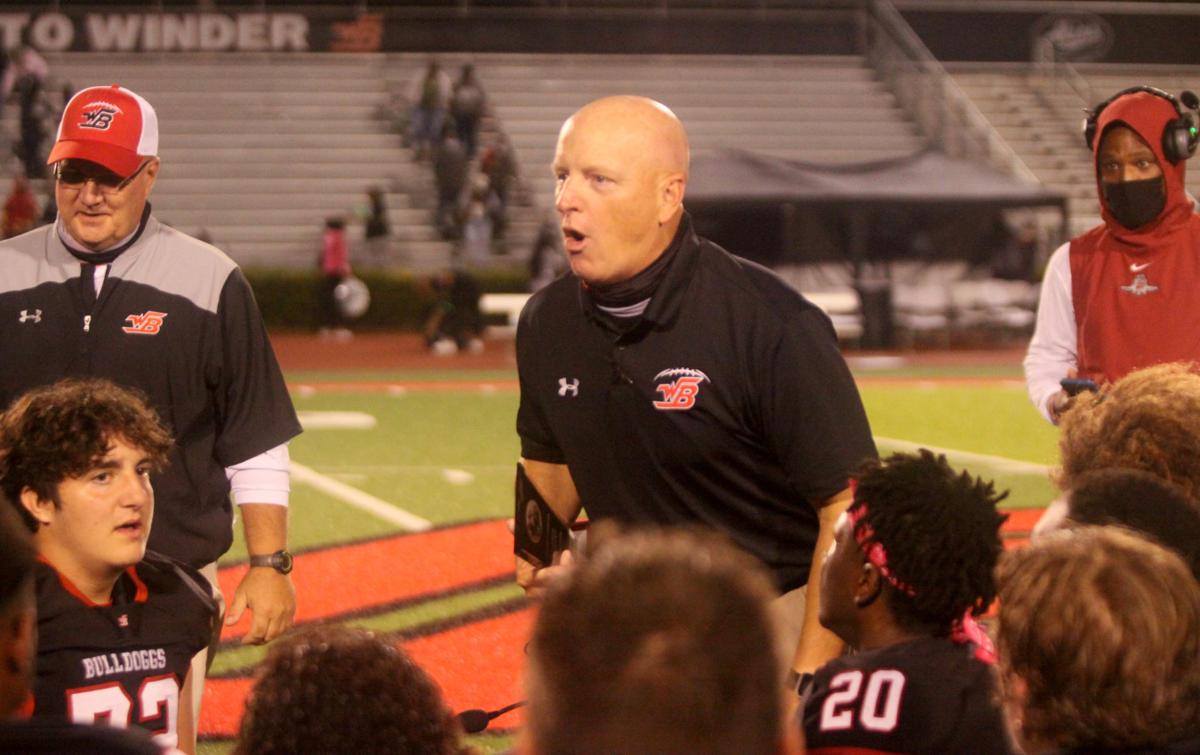 Winder-Barrow head coach Ed Dudley and the Bulldoggs would likely clinch a state playoff berth with a win Friday, Nov. 20, in their regular-season finale at home against Lanier. A loss would almost certainly eliminate the Bulldoggs from postseason contention. 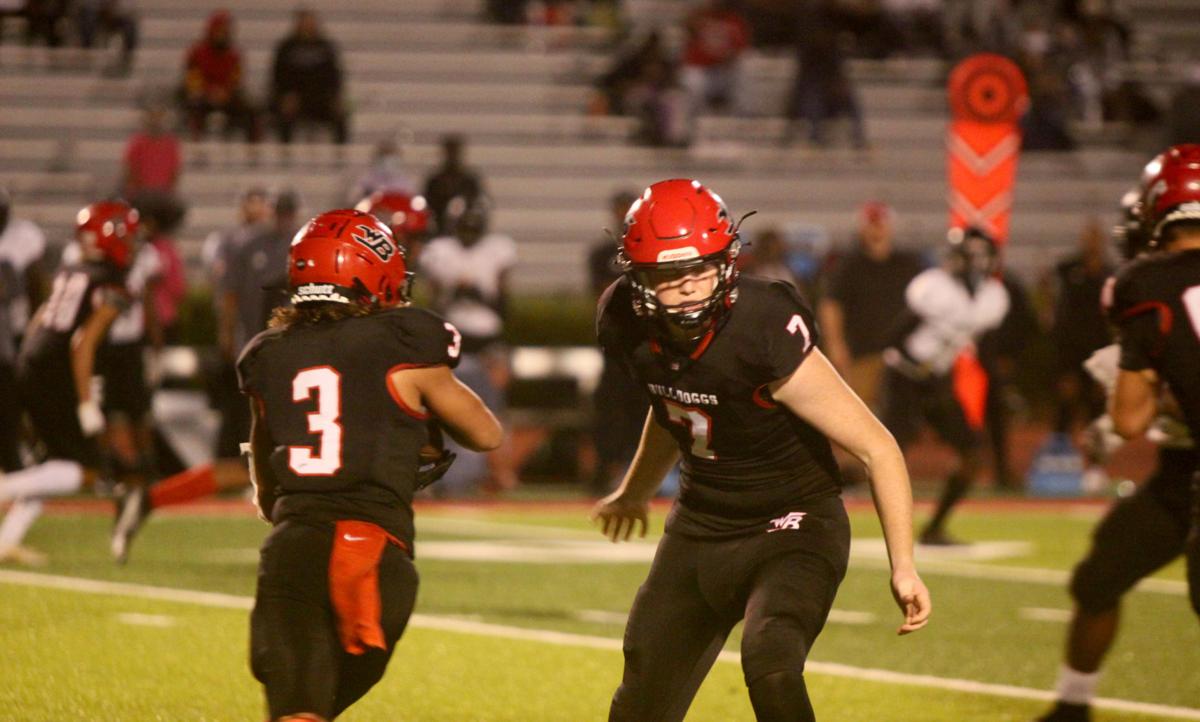 Winder-Barrow junior quarterback Conyer Smith (7) and junior running back Caiden Carruth will be among the Bulldoggs looking to help deliver a big night on the offensive end. 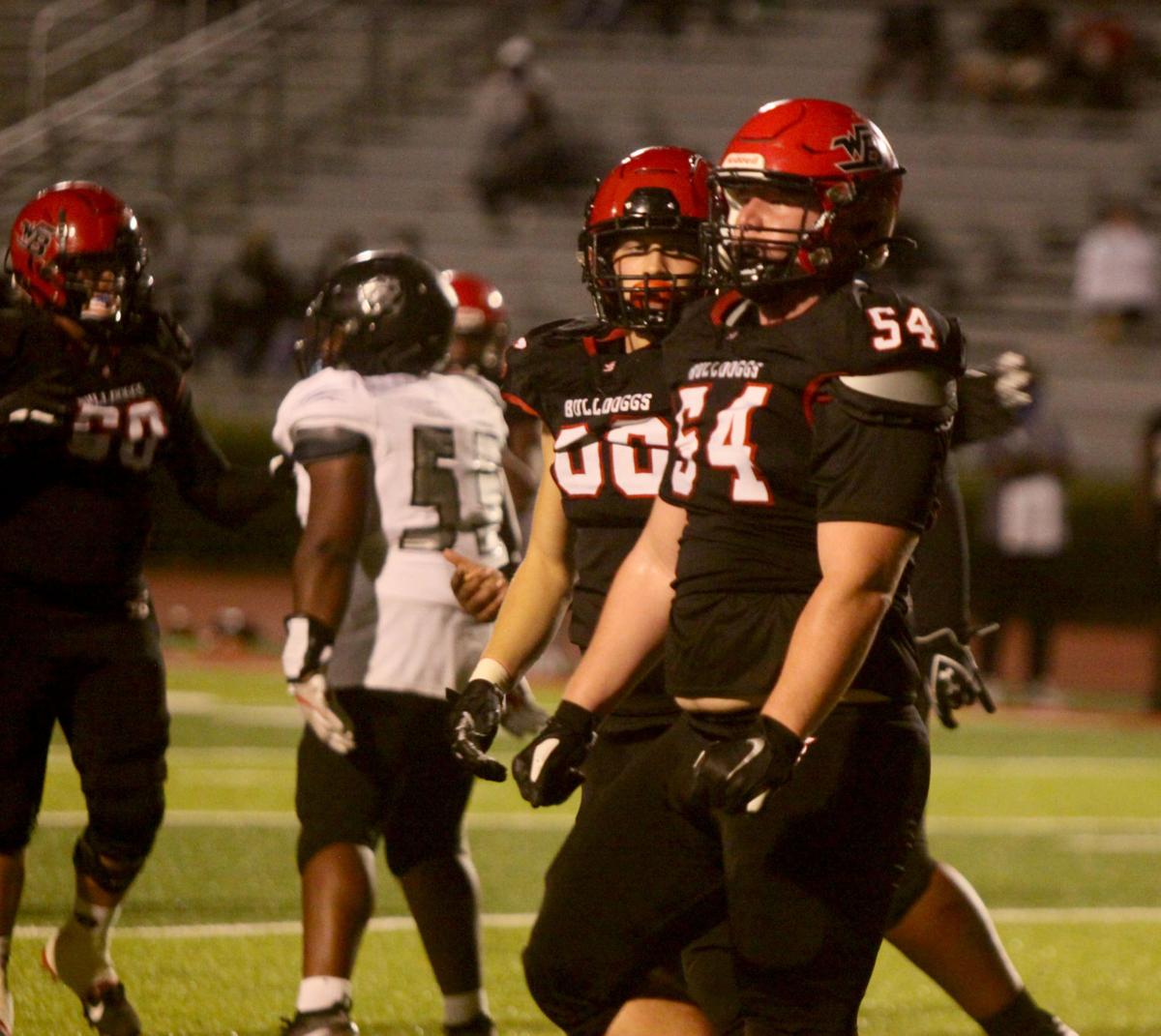 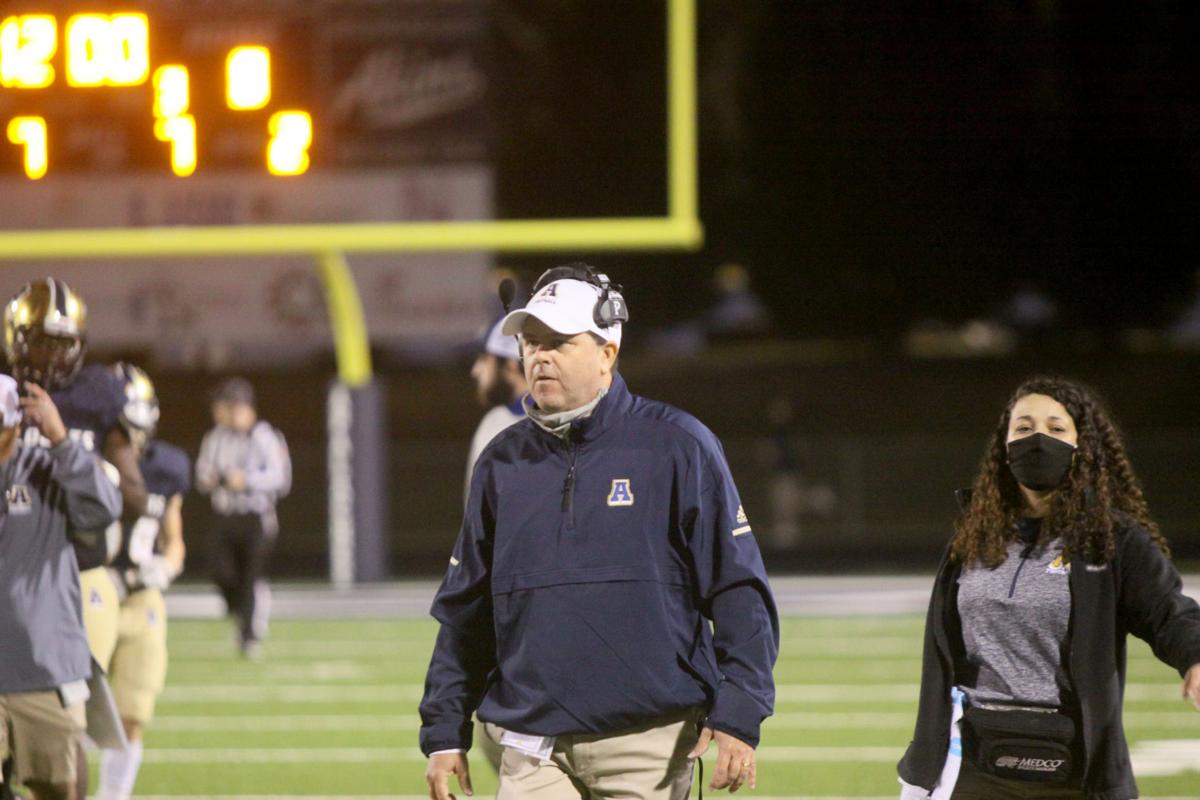 Third-year Apalachee head coach Tony Lotti and the Wildcats need a win at Jackson County on Friday and a Walnut Grove upset of Loganville to have any shot at a postseason berth. 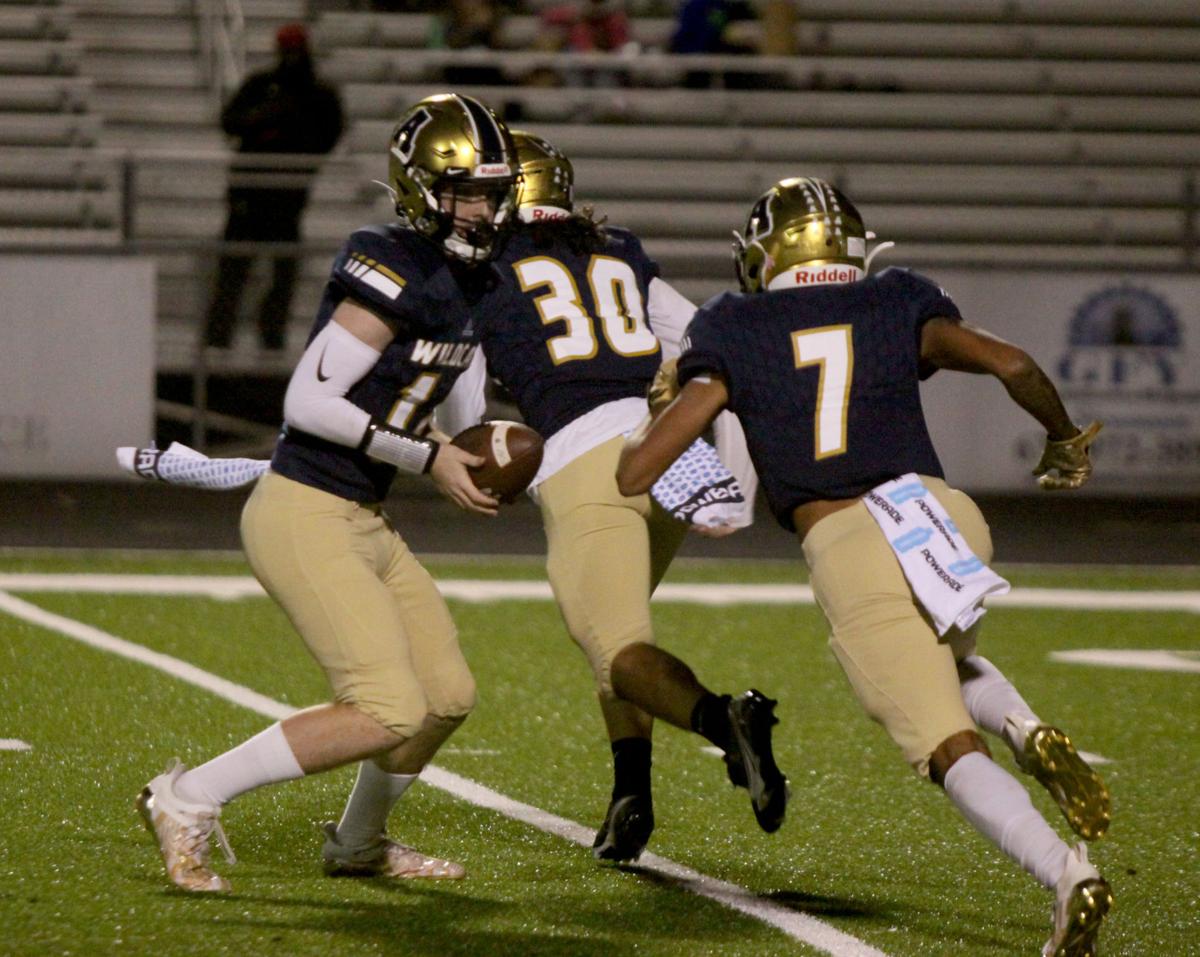 Apalachee quarterback Todd Jones hands the ball to running back Isaiah Starks during the Wildcats' home loss to Loganville on Friday, Nov. 13.

Winder-Barrow head coach Ed Dudley and the Bulldoggs would likely clinch a state playoff berth with a win Friday, Nov. 20, in their regular-season finale at home against Lanier. A loss would almost certainly eliminate the Bulldoggs from postseason contention.

Winder-Barrow junior quarterback Conyer Smith (7) and junior running back Caiden Carruth will be among the Bulldoggs looking to help deliver a big night on the offensive end.

Third-year Apalachee head coach Tony Lotti and the Wildcats need a win at Jackson County on Friday and a Walnut Grove upset of Loganville to have any shot at a postseason berth.

Apalachee quarterback Todd Jones hands the ball to running back Isaiah Starks during the Wildcats' home loss to Loganville on Friday, Nov. 13.

While the GHSA Region 8-AAAAAA standings might appear a little muddied at the moment entering the final week of regular-season play, the picture is actually quite clear for Winder-Barrow this week. Win and most likely qualify for the state playoffs; lose and almost certainly be eliminated.

And with that in mind, while it might not technically be classified as such, the Bulldoggs and coach Ed Dudley are viewing their home region matchup with Lanier at 7:30 p.m. Friday, Nov. 20, as very much a playoff game.

“That’s what we’re calling it. It all starts a week early for us,” Dudley said Tuesday, Nov. 17. “We feel like if we can play well and win, we’re most likely moving on. And if not, then we start thinking about next year.”

With second-ranked Buford (7-1, 5-0 region) and No. 5 Dacula (6-2, 5-0) already assured of the top two playoff spots in the region and set to duke it out for the title Friday night, and Central Gwinnett (1-9, 0-6) already eliminated from postseason contention, that leaves the other four teams battling for the final two playoffs spots. Along with Friday’s game between Winder-Barrow (4-5, 2-3) and Lanier (4-4, 1-4), Saturday afternoon's game between Habersham Central (5-4, 3-2) and Shiloh (3-6, 2-3) will help settle the final standings. Depending on the outcomes of those two games, there are multiple scenarios where there could be a three-way tie for one or two playoff spots, and the tiebreaker would go to the team with the fewest points allowed against region opponents.

So here’s the current breakdown:

•Habersham Central is currently in third place in the region standings at 3-2 and has allowed 144 points in five region games.

•Winder-Barrow currently sits in fourth place in the standings at 2-3 and has allowed 140 points in five region games.

•Shiloh currently sits in fifth place in the standings at 2-3 and has allowed 181 points through five region games.

•Lanier is in sixth place currently at 1-4 and has allowed 129 points in five region games.

That leaves the following scenarios in play.

•If Habersham beats Shiloh, and Winder-Barrow beats Lanier, Habersham would finish third and the Bulldoggs would be the No. 4 seed, facing the Region 5 champion in the first round of the state playoffs next week.

•If Habersham beats Shiloh, and Lanier beats Winder-Barrow, the Raiders would be the No. 3 seed and there would be a three-way tie for fourth between Lanier, the Bulldoggs and Shiloh. By the tiebreaker rule, Winder-Barrow would be out and Lanier would all but certainly qualify based on point differential.

•If Habersham loses to Shiloh, and Winder-Barrow beats Lanier, there would be a three-way tie for third between Winder, Habersham and Shiloh, with the Bulldoggs and Raiders likely going through to the playoffs.

•If Habersham loses to Shiloh, and Lanier beats Winder-Barrow, Shiloh would be third and Habersham would be fourth.

In essence, there appears to be no path forward for the Bulldoggs if they lose Friday night, and, at the same time, the odds of them winning Friday and missing the postseason are extremely slim, which keeps Dudley’s message to his team pretty straightforward.

“We’re not really focusing on the ‘what-ifs’ right now,” Dudley said. “Our goal is go play well on Friday, and if we can do that, we can achieve the goals that are still in front of us. We’ve got a very talented, well-coached team coming in here to face us Friday, and it’s just another example of how tough this region is. I wouldn’t expect anything less.”

The Longhorns have been an up-and-down team this fall, struggling since getting off to a 3-0 start, and are coming off a 20-16 overtime loss to Shiloh last week, their third consecutive setback. But Dudley said it’s still a typical Lanier team, loaded with talent at the skill positions and size along the front lines. Senior quarterback Andrew Blackford, who Dudley describes as a “dynamic, pro-style passer,” has thrown for 1,208 yards and nine touchdowns in eight games this year — with junior Reese Scott and senior Tyler Washington among his favorite targets — and a quartet of running backs have accounted for the Longhorns’ rushing attack.

Defensively, the Longhorns are led by senior linebacker Rylan Serna, who has notched 105 tackles and seven sacks.

“They’re very big up front, so that presents a challenge. And they’ve got a lot of veteran experience in the secondary so we’ve got to be wary of that as well,” Dudley said. “They’ve had a little bit of bad luck this year, but they’re in the same spot as us in terms of what they need to do, so we’re preparing to get their best shot.”

Meanwhile, the Bulldoggs are coming off a nine-day, three-game stretch that saw them win twice before falling 45-7 at Buford on Friday, Nov. 13.

The Bulldoggs will look to sophomore quarterback Conyer Smith, who had a touchdown pass to Stewart Allen in the loss at Buford, to take care of the ball, while senior running back J.C. Green enters play Friday 23 yards short of 1,000 on the season. On defense, Winder-Barrow will hope to force some turnovers against Blackford, who has thrown 11 interceptions on the year. Junior twin defensive backs Jamarious and Omarious Smith have five picks a piece for the Bulldoggs, while senior linebacker Chandler Maxwell leads the team with 91 tackles.

“It’s been a team defensive effort for us, and we’re going to need that again Friday,” Dudley said. “It’s going to be very important that we dirty up the pocket and make their quarterback a little uncomfortable.

“We’re going to have to play really well overall. We’re coming off a tough stretch with some bumps and bruises, but we feel pretty good. The key will be eliminating the mistakes and penalties, and if we do that we have a chance.”

Elsewhere in the county, Apalachee is also facing a must-win situation this week, but the Wildcats will also need to get some help if they’re going to snap a decade-long postseason skid.

The Wildcats, who were coming off a 16-7 victory at Walnut Grove on Nov. 6, would have set themselves up in the driver’s seat with a home win over Loganville last week. But they got off to a rough start, allowing 14 points in the first three minutes, and never could recover, falling to the Red Devils 43-15.

“We controlled our destiny up until then, but we made some crucial mistakes when we couldn’t afford to make them, and, unfortunately that’s been our MO this season,” Apalachee coach Tony Lotti said. “You don’t want to take anything from Loganville because they came out and executed well. This game is obviously extremely important because we have to win to have any chance at going past this week. And you never know what can happen, so I hope our guys will be motivated and ready to go.”

Likewise, Jackson County is also entering Friday’s game with faint playoff hopes and will need the same sequence of events to unfold as the Wildcats in order to get into the postseason. The Panthers are led by legendary Georgia high school head coach Rich McWhorter, who is in his second season with the program after winning 288 games and four state titles in 29 years with Charlton County.

“He’s a hall of famer who knows what he’s doing,” Lotti said of McWhorter. “I have a lot of respect for him and his program, and we’ve become good friends. He’ll no doubt have his guys fully prepared and ready to play. Right now, I actually like it with us going on the road because playing at home has not been very beneficial for us this year.”

Junior running back La’Travious Ransom has been the star on offense for the Panthers this season, rushing for 986 yards through nine games, including a 203-yard effort in a loss to Greenbrier last week, while senior Andrew King headlines a big defensive line.

Jackson County will be trying to snap a three-game losing streak, a span in which it has managed just 19 points.

“I think we’re a lot alike on a lot of different levels, and they’ve had to deal with some of the same issues that many other teams are having to deal with,” said Lotti, whose Wildcats have dealt with a rash of costly injuries.

A season-ending hip injury to senior running back Tauheed Ferguson in the third game of the year dealt a severe blow to the offense, and the Wildcats will again be without junior kicker Brody Ham, who suffered a non-contact, season-ending injury during practice in the middle of last week.

“You throw those types of things in there and it’s been difficult to overcome in games,” Lotti said. “Depth is an issue for us right now on both sides of the ball, and we’ve got to have our veteran players who are left ready and then rely on our younger guys to help out and fill those spots.”

Ultimately, Lotti said, the Wildcats’ chances Friday will boil down to whether they can avoid the bad start and catastrophic mistakes on offense and whether they can get off the field consistently on third down defensively — something they repeatedly struggled with in the loss to Loganville.

“Our best bet was to cover them well in schemes, but we just couldn’t sustain the pressure, and their quarterback was able to stand back and wait for people to get open,” Lotti said. “We just can’t keep doing the things we’re doing in these really big games. We haven’t been able to get over that hump, but hopefully we find a way this week.”