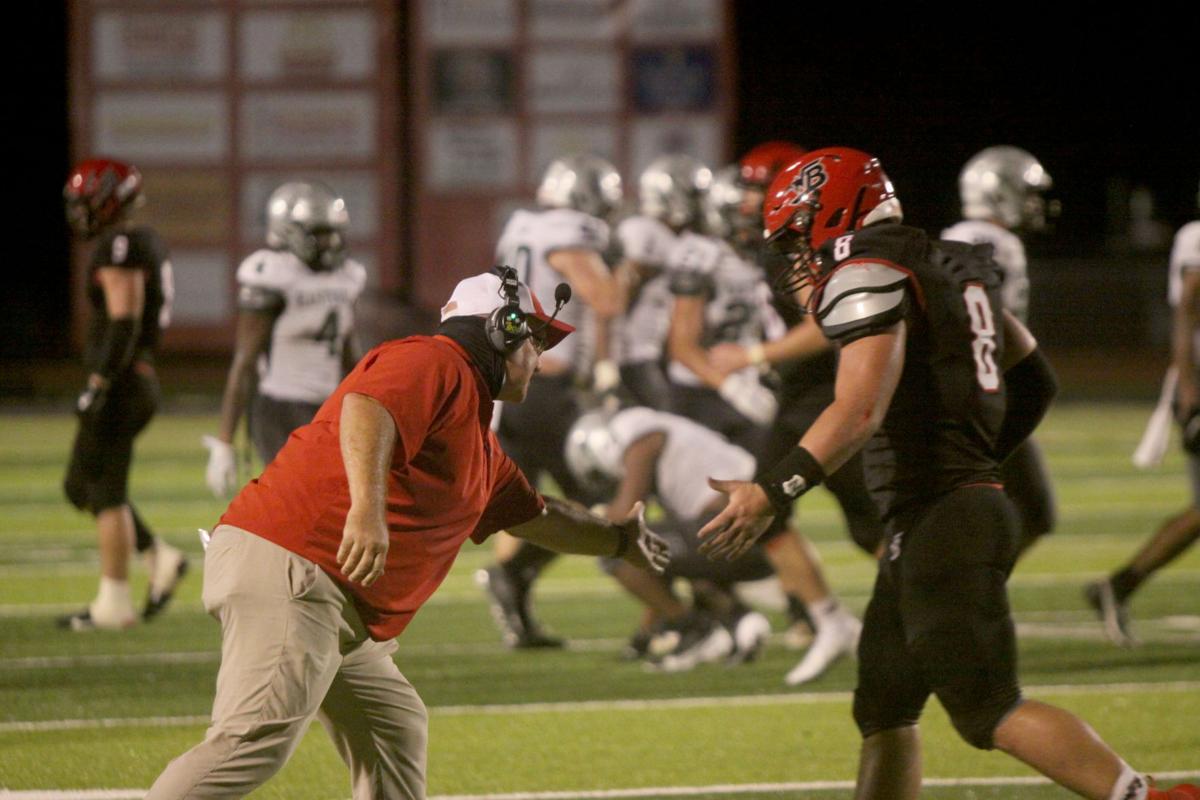 Winder-Barrow senior linebacker Chandler Maxwell (8) celebrates with defensive coordinator Scott Rider after a big defensive stop in the second half against Eastside last week. Maxwell and the Bulldoggs (1-1) will host Glynn Academy at 7:30 p.m. Friday. 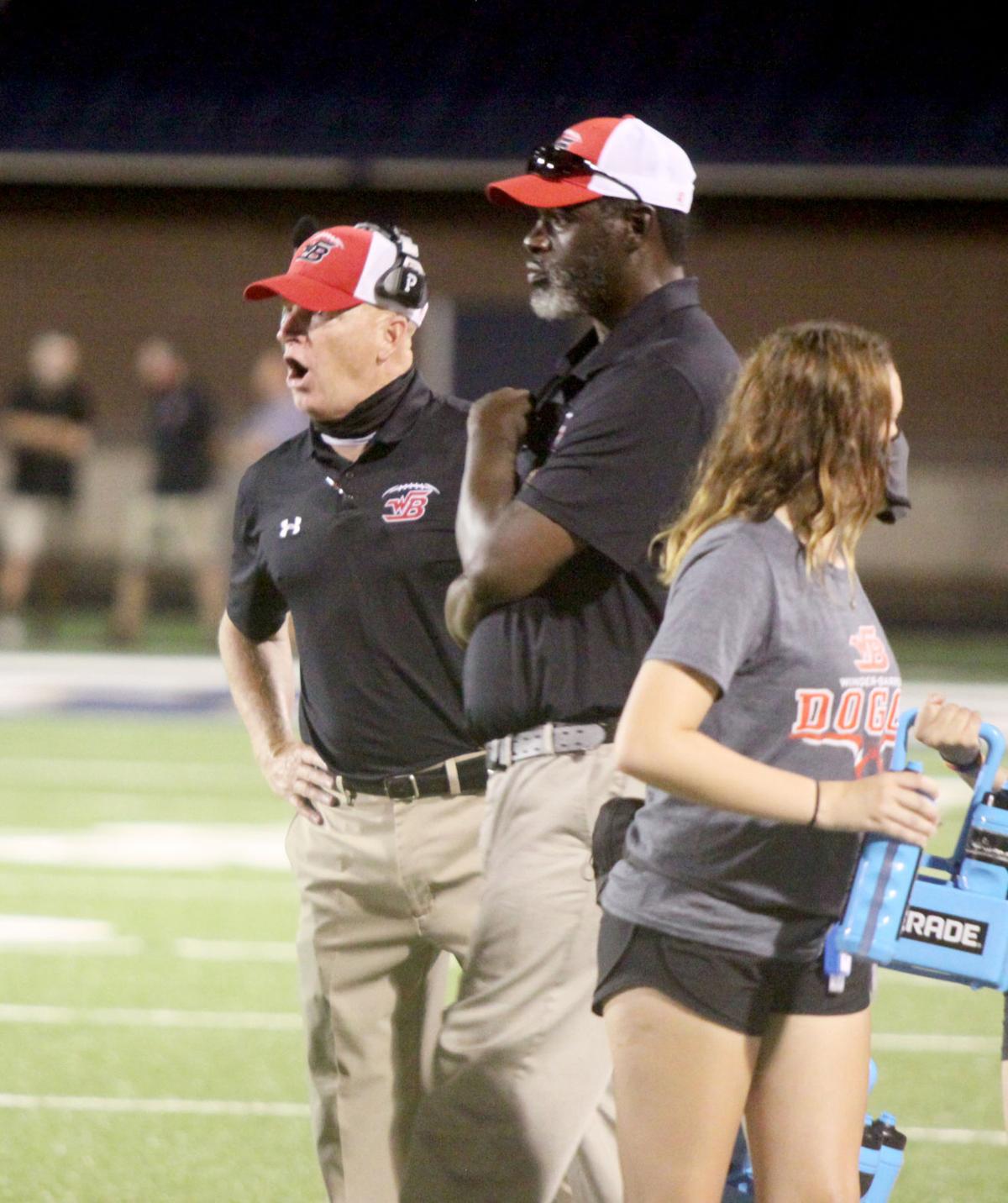 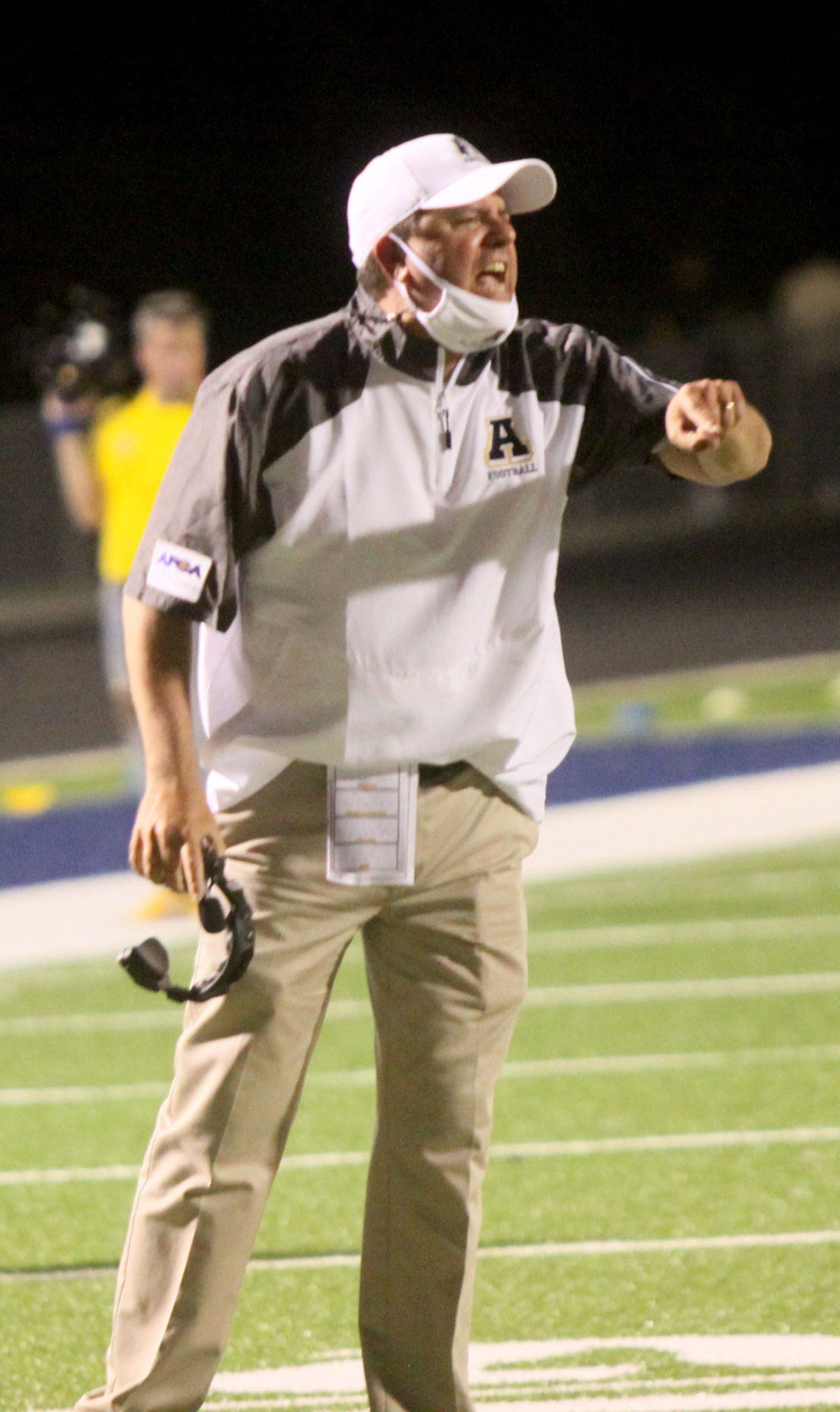 Apalachee coach Tony Lotti and the Wildcats will have their final non-region tune-up Friday at Madison County. 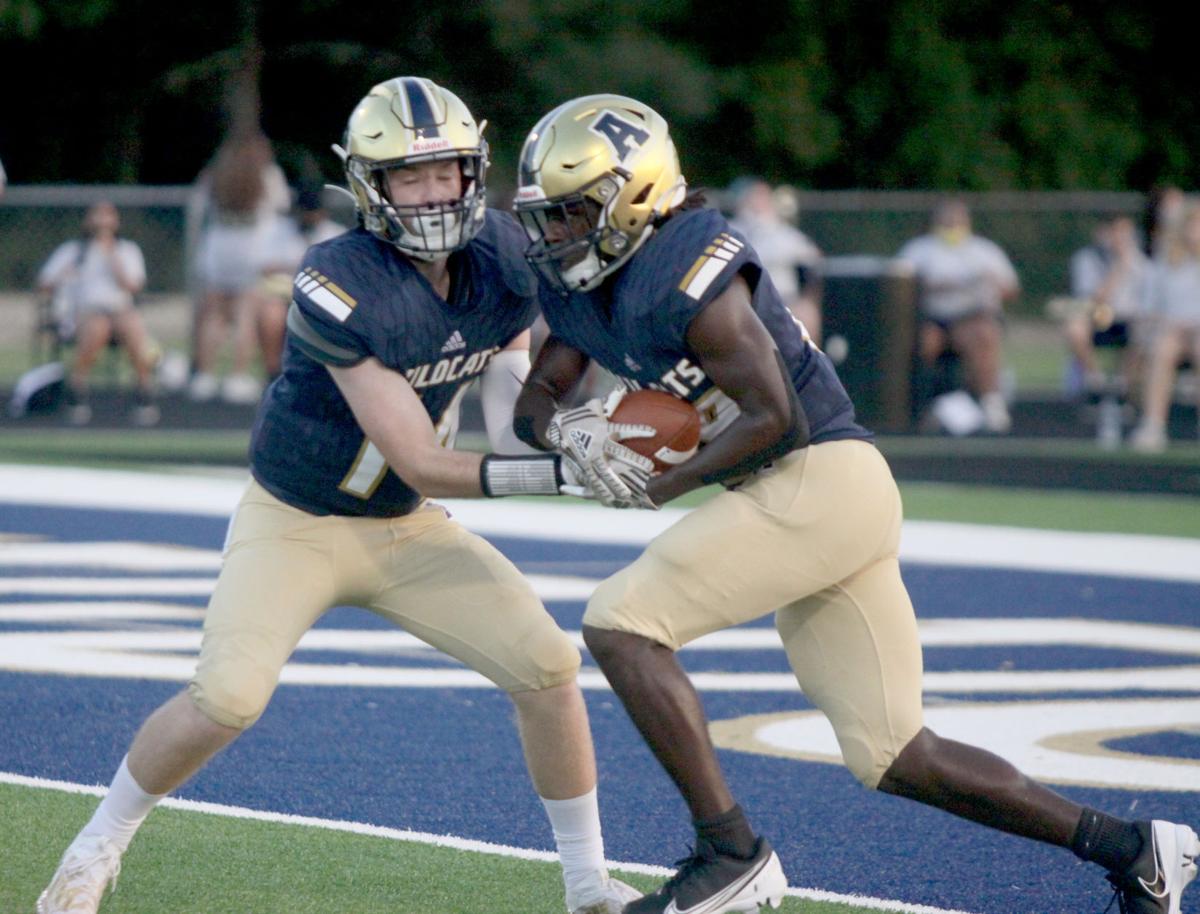 Apalachee senior quarterback Todd Jones and senior running back Tauheed Ferguson have had the Wildcats' wing-T offense working well through the first two weeks of the season. 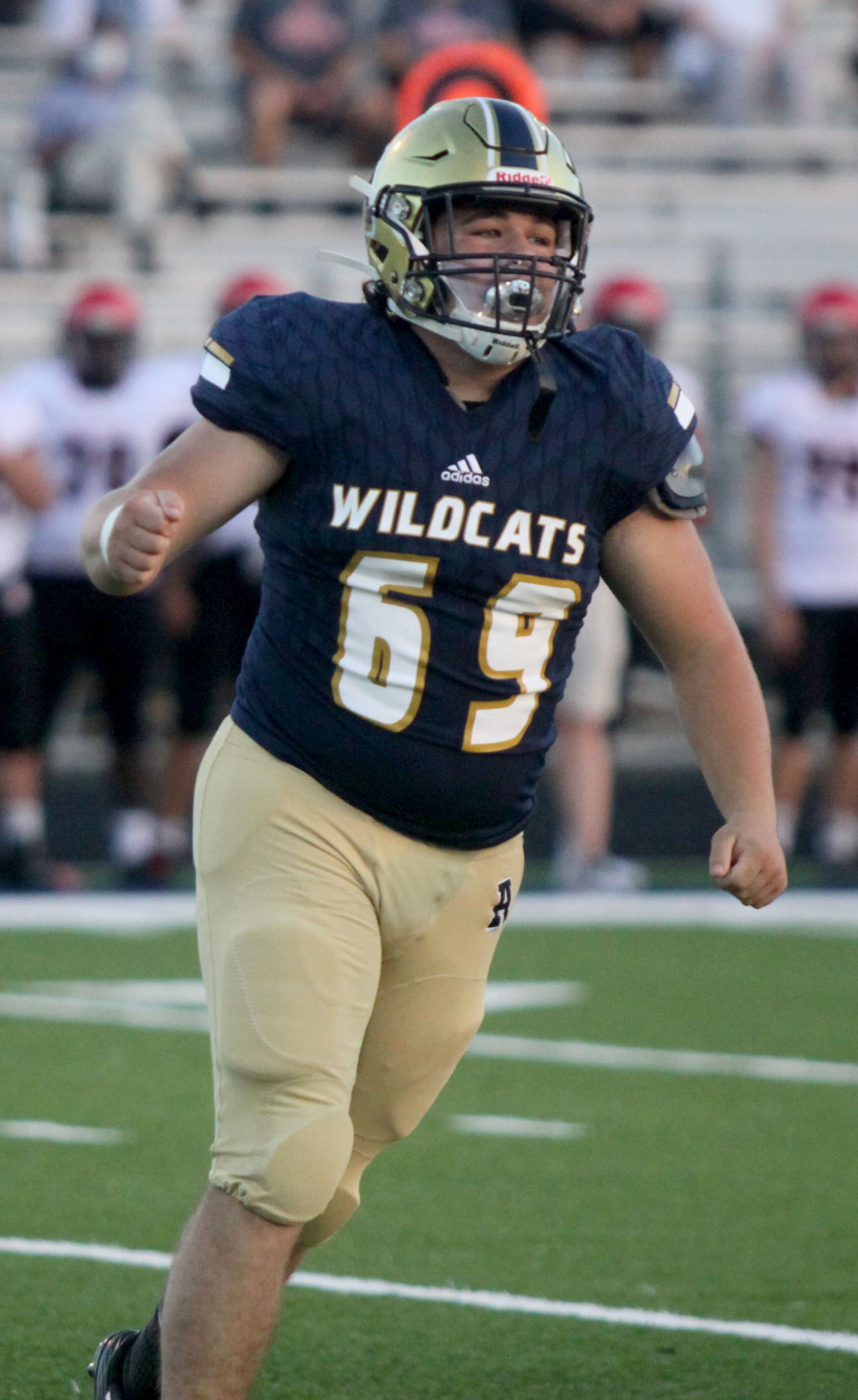 Junior Joseph Bentley is a key player on the defensive line for Apalachee.

Winder-Barrow senior linebacker Chandler Maxwell (8) celebrates with defensive coordinator Scott Rider after a big defensive stop in the second half against Eastside last week. Maxwell and the Bulldoggs (1-1) will host Glynn Academy at 7:30 p.m. Friday.

Apalachee coach Tony Lotti and the Wildcats will have their final non-region tune-up Friday at Madison County.

Apalachee senior quarterback Todd Jones and senior running back Tauheed Ferguson have had the Wildcats' wing-T offense working well through the first two weeks of the season.

Junior Joseph Bentley is a key player on the defensive line for Apalachee.

After a thrilling, emotional win at Apalachee in week one where Winder-Barrow was able to avoid any major costly mistakes for the most part, Bulldoggs coach Ed Dudley believes his relatively young team may have learned a valuable lesson in week two.

A rough first quarter saw the Bulldoggs fall behind Eastside 20-0 by halftime, and they couldn’t recover in time, losing 27-14 in their home opener.

“We didn’t play very well in that first half, and we’ve got to come out this week and perform better out of the gate and not wait until the third quarter to play with the effort and enthusiasm that we’re capable of if we want to have a chance at winning,” said Dudley, who will again go for career win No. 200 on Friday as the Bulldoggs (1-1) host Glynn Academy in a non-region contest at 7:30 p.m. “We lost the turnover battle the other night (against Eastside) and that’s always a big thing at every level of football. We couldn’t get off the field defensively on third down, and they just wore us down.

“I hope our guys were paying attention. Maybe we were running around with our ‘we beat Apalachee’ T-shirts on all week and then realized at halftime that doesn’t get you anywhere. We started seven sophomores the other night so we’re still growing and learning on the fly, and we’re going to try to grow from that loss.”

Friday’s game will be unique for the Bulldoggs in that it will be the first time they’ve ever squared off with Glynn Academy out of Brunswick and the first time in several years that they’ve faced a south Georgia team.

The matchup between the two teams roughly 300 miles apart was born late in the season scheduling process last winter when the Bulldoggs lost a traditional rival from their schedule in Loganville and were looking for a game. Dudley found a match in Glynn Academy, a fellow Class 6A program in Region 2 which is under the tutelage of one of his closest friends, Rocky Hidalgo, who previously worked under Dudley as his defensive coordinator at Walton.

Hidalgo, who is 96-41 in 11-plus seasons as a head coach, actually took over for Dudley at Walton in 2009 after Dudley took the head coaching job at Ware County.

Hidalgo joined Glynn Academy in 2014 and has led the Red Terrors to a 56-23 mark so far with three region championships and six straight playoff appearances, including a trip to the Class 5A state finals in 2015 and a 6A semifinal appearance in 2017.

“We just thought it would be a good intersectional game between two teams from different parts of the state,” Dudley said. “We think it’ll help both schools, especially us as we’re looking to grow our program, and it’ll help the road team each of the next two years in terms of preparing for potential playoff travel down the road. They’re a top program and it’ll be a great measuring stick for us.”

The Terrors are coming off a 31-14 loss to Camden County last week that dropped them to 1-1 and will come to Winder with a well-run triple-option attack on offense, Dudley said. Senior TJ Lewis is a 6-foot-4 dual-threat quarterback who executes the offense, and a pair of explosive backs will present the Bulldoggs with some challenges on the perimeter.

“They’re very tough and physical, and they’re going to play hard,” Dudley said. “They’ve got a lot of team speed, so there’s going to be some good competition to be had out on the field. We haven’t really seen a team that majors in the triple option, so it’ll be a different twist for us. And their kicking game has some wrinkles that maybe we’re not used to seeing in north Georgia but that we need to be prepared for.”

Meanwhile, the Bulldoggs will hope to have another big performance in the running game from senior running back J.C. Green, who has rushed for 259 yards and five touchdowns through the first two games at 8.1 yards a carry behind a veteran offensive line. But they’ll also hope to get a more consistent performance in the passing game where junior first-year starter Trevor Summerfield has shown early flashes, including a 74-yard touchdown pass to Stewart Allen last week, but also threw three fourth-quarter interceptions against Eastside.

And on defense, the Bulldoggs will likely need a stronger output from a unit that has allowed over 800 rushing yards between its first two outings. Senior linebacker Chandler Maxwell has been an early standout, notching an eye-popping 35 tackles (21 solo) through the first two weeks, while senior defensive end and Florida Atlantic commit Jacob Merrifield has made his presence felt, registering 15 tackles, including seven tackles for a loss.

“This game will be good for us and should help us get ready for what’s looming down the road,” Dudley said. “We know we’re young and still have got a long way to go, so we want to see that big leap and improvement.”

In other local action Friday, Apalachee will try to pick up its first victory of the year in its final tune-up before Region 8-AAAAA play begins Oct. 2 against Clarke Central. The Wildcats (0-2), who are coming off a 56-35 home loss to Habersham Central, will take their first road trip of the season to face a Madison County team that had to cancel its game last week against Holy Innocents’ as 30 of its players were quarantined due to coronavirus concerns.

As of Tuesday, the Red Raiders’ shortage was down to 12 players and the game was a go.

The Red Raiders (0-1), who are coming off a Class 4A quarterfinal appearance last season, dropped their season-opener at Habersham Central 27-6 on Sept. 4. But while it would normally help his team by seeing Madison County on film two weeks in a row, Apalachee coach Tony Lotti said the Wildcats don’t have that luxury because of the effects COVID-19 has had on the Madison County roster.

“They’ve been missing some guys from the start so we don’t fully know what they have,” said Lotti, whose team has lost each of the last two years to the Red Raiders, including a touchdown pass on the final play of the game last year in Danielsville. “We know it’s going to be a fight. Coach (Chris) Smith does a great job with that program, and they’ve really bought into his system. There’s no doubt that they’ll be prepared and ready to go, and hopefully we can match that.”

After losing several key seniors from last year’s team, the Wildcats are having to adjust on the fly defensively. The Apalachee unit was gashed for over 600 yards of offense in the loss to Habersham last week as senior running back Jackson Clouatre ran for over 300 yards and scored three second-half touchdowns to help his team avenge a 56-49 loss to the Wildcats in the 2019 season finale. The Raiders (2-0) also got a strong performance from senior quarterback Joshua Pickett, who threw a pair of touchdown passes and also ran for 56- and 61-yard scores, all in the first half.

“They’re really good this year and have improved in a lot of areas and were very physical up front,” Lotti said of Habersham. “I felt like our kids kept fighting no matter what happened, and it was a pretty clean game on both sides with no turnovers. We were able to clean up some of the mistakes we made against Winder, but we’ve got to do a much better job tackling. That’s part of the growth process.

“We have some guys on defense who are having to mature quickly, and we knew there we going to be growing pains. But these non-region games have been valuable for them.”

Apalachee, which had a couple of brief leads in the first quarter on senior night against Habersham, had rushing touchdowns from Channin Daniels, Tauheed Ferguson, Isaiah Starks and Prince Tate, while Colby Sikes caught a touchdown pass from Todd Jones.

The Wildcats have had their running game clicking well through the first two weeks, tallying 628 yards at 6.8 yards a carry with seven different players finding the end zone. Lotti was encouraged by Ferguson, who had to leave the Winder-Barrow game early in the second half with a knee injury (after a season-ending injury in the 2019 season opener) but bounced back with over 130 yards on the ground against the Raiders.

“It was good to see him get out in the open field and break one,” Lotti said. “It was good for his confidence to show he still has that speed.”