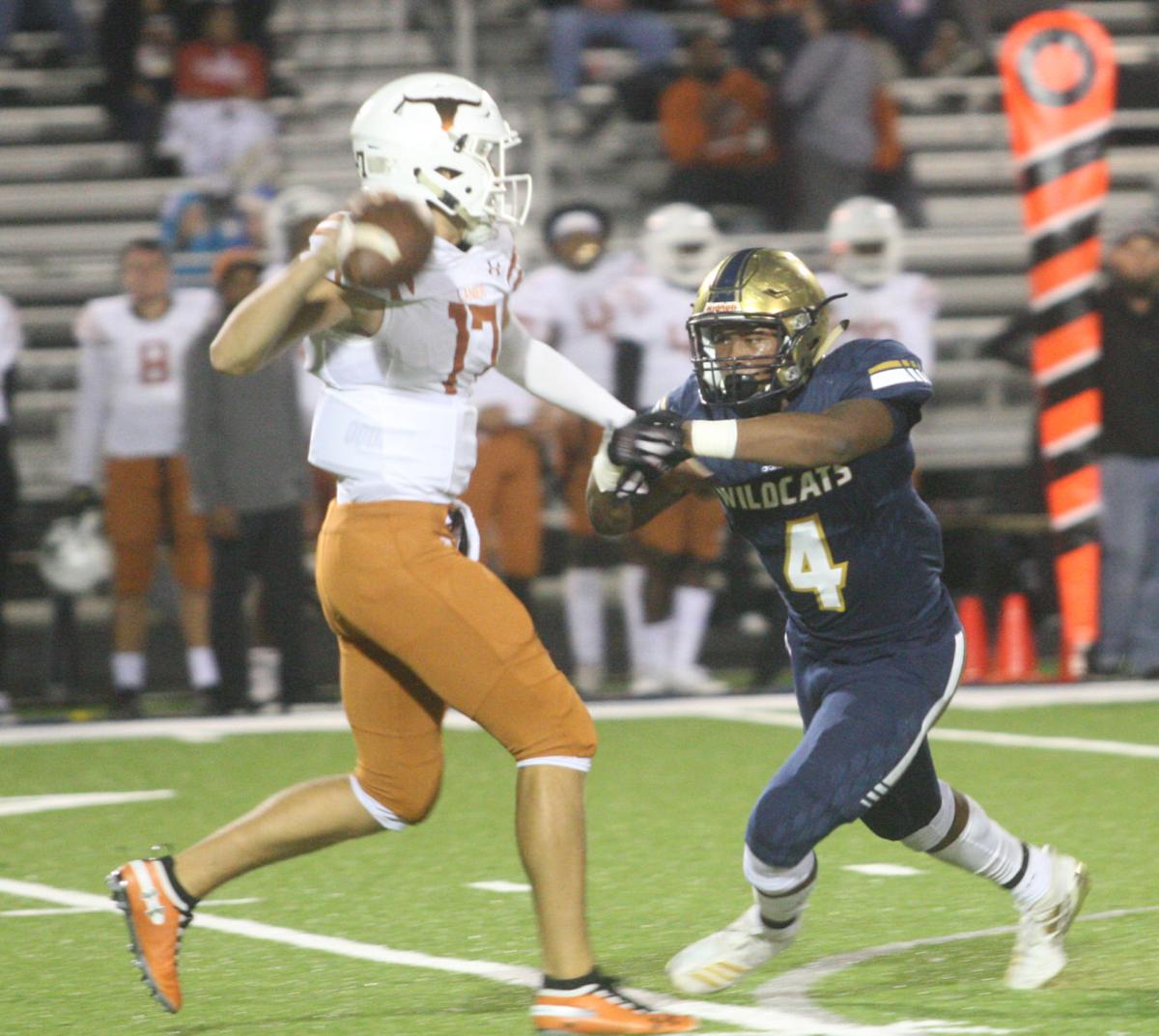 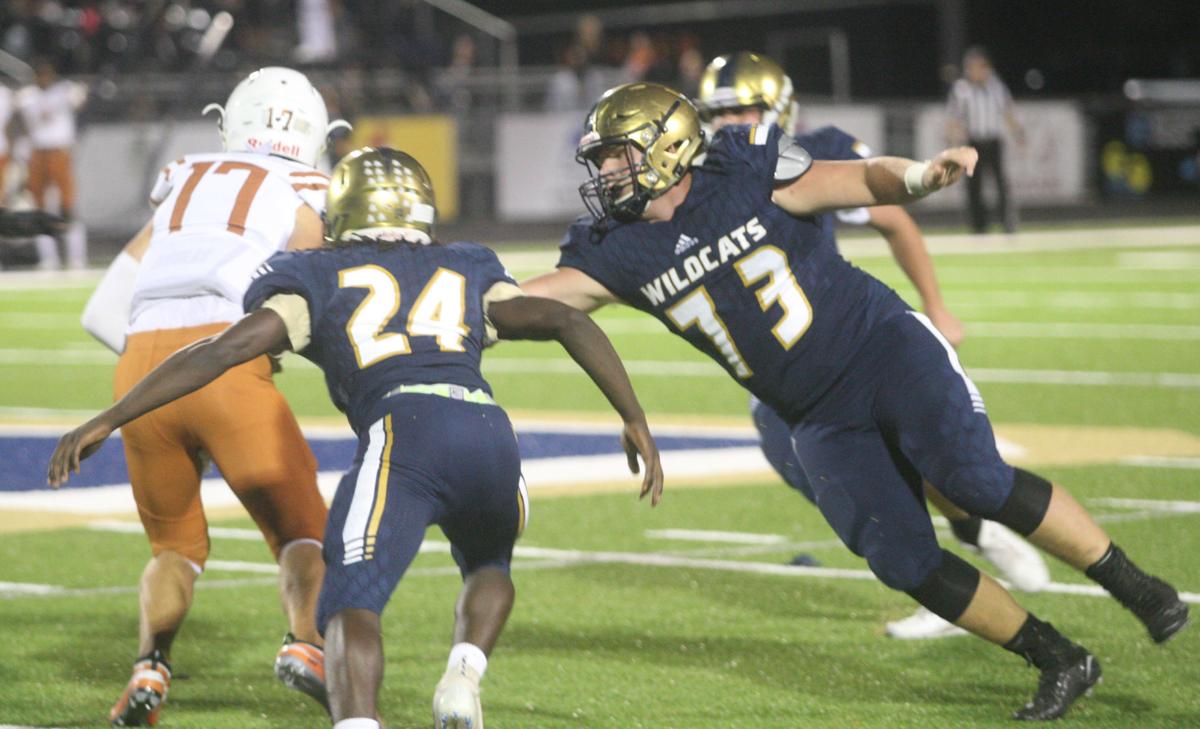 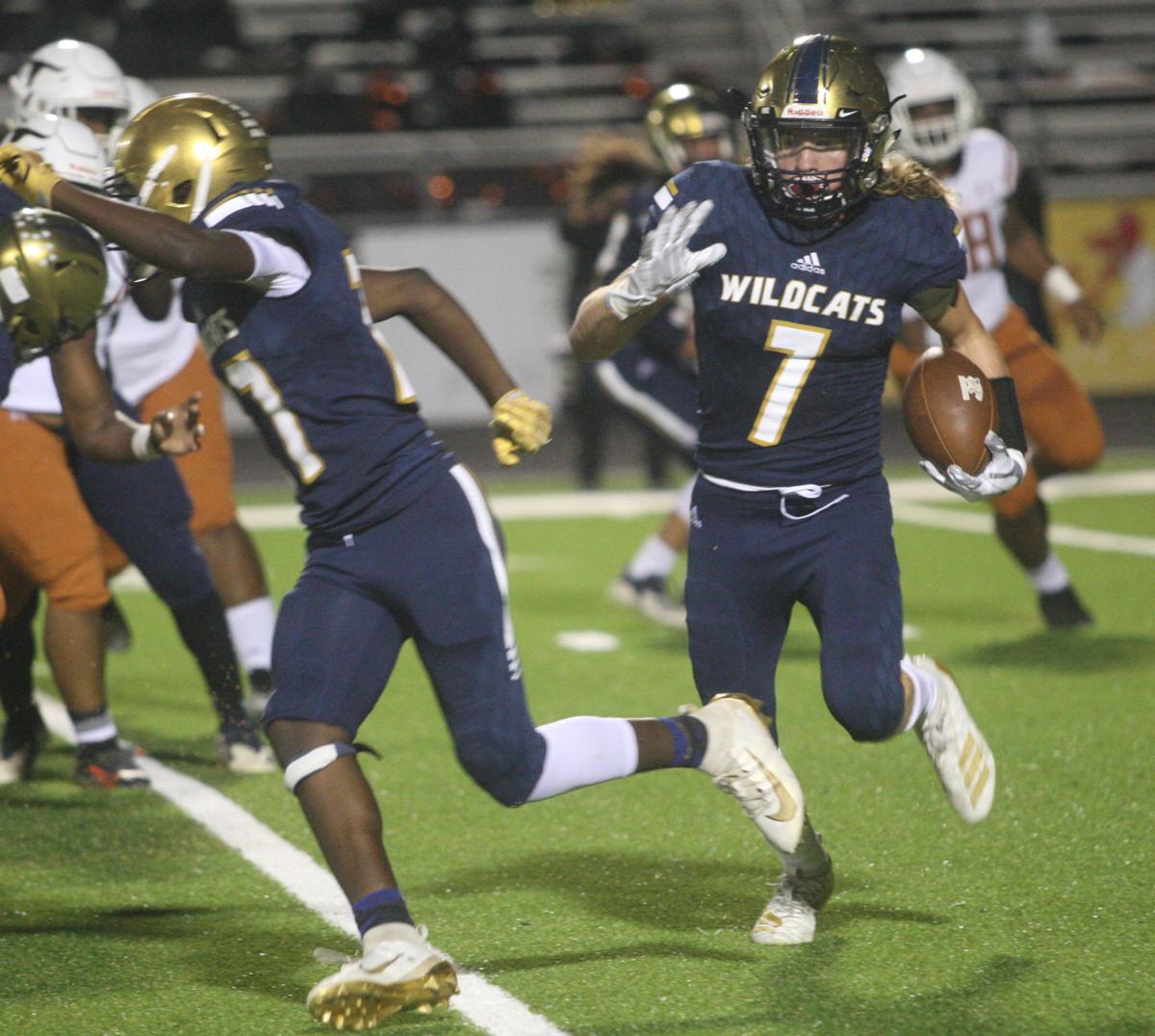 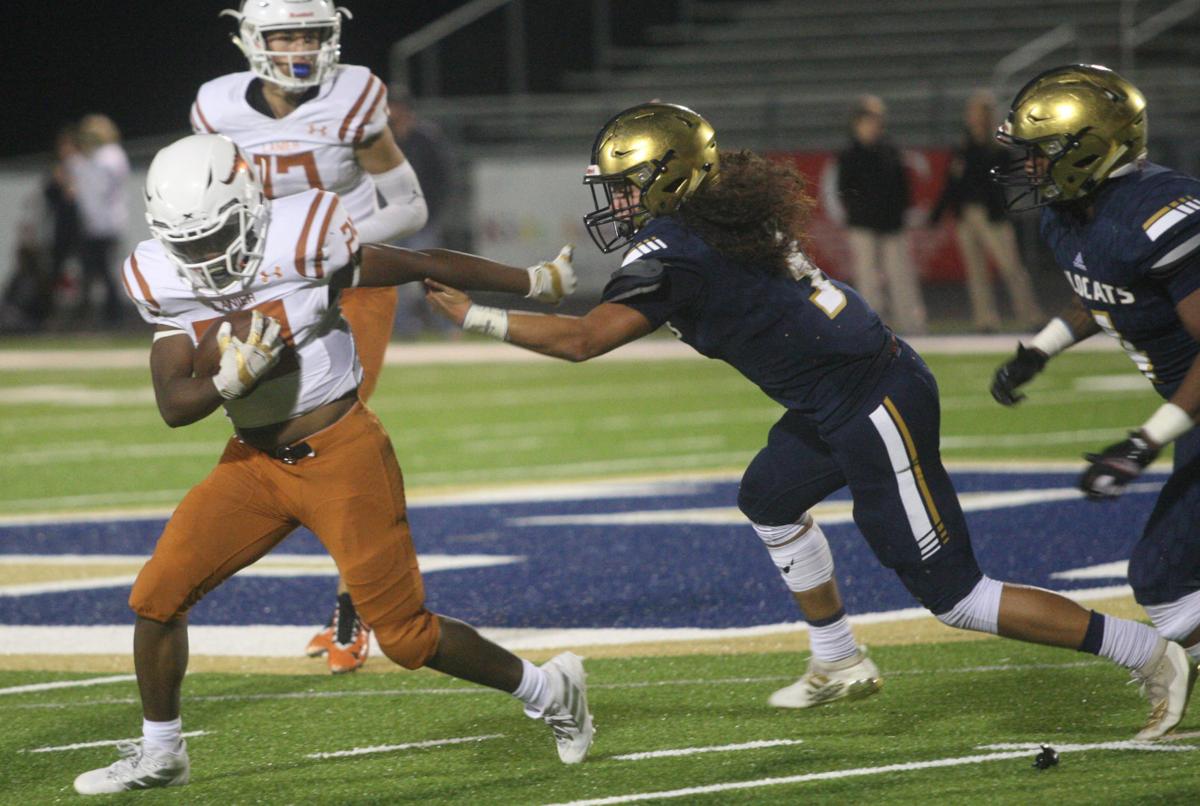 Apalachee's Tyson Wilson tries to bring down a Lanier runner.

Apalachee's Tyson Wilson tries to bring down a Lanier runner.

The Apalachee High School Wildcats put up a fight but the visiting Lanier High School Longhorns remained undefeated with a 45-13 win at R. Harold Harrison Stadium on Friday, Oct. 25.

It was a case of the final score not indicating how competitive the game was, especially for three quarters. AHS coach Tony Lotti praised the effort of his team against its second state-ranked opponent in as many weeks.

“I was proud of our fight,” Lotti said. “We fought all night. We are not out of it yet. We still have two very important region games left. We have to keep going despite being so banged up.”

The game was not decided until the fourth quarter when Lanier (8-0, 3-0 GHSA Region 8-AAAAAA) put some breathing space between it and AHS (2-6, 0-3). Even after moving in front 38-13 in the fourth quarter, the Longhorns continued to have their first-string players in the game and added another score on a 15-yard run by Taj Barnes with 6:51 remaining. Barnes finished the night with four touchdowns.

Lanier took a 28-7 lead into halftime as Barnes rushed for three first-half scores. The Longhorns, ranked No. 5 in the state, trailed 7-0 early in the contest.

Lanier quarterback Andrew Blackford also connected with Tyler Washington on a 23-yard play to give his team a three-touchdown lead at the break.

AHS continued to battle in the second half, taking the first possession of the third quarter and moving 65 yards on the drive, capped by a 25-yard completion from Todd Jones to Isaiah Starks. The extra-point kick failed, leaving the deficit at 28-13.

The Wildcats attempted an onside kick but Lanier recovered and took possession at its own 31. The Longhorns moved into AHS territory, but the Wildcat defense forced a punt and took over at their own 15-yard line.

Looking to cut deeper into the Lanier lead, the AHS offense initially gained a first down but a holding call backed it up to the 10, forcing a third-and-14. An incomplete pass then forced the Wildcats to punt.

The Longhorns then began at their own 37 and added three more points on a 36-yard field goal by Mason Mancilla with a minute remaining in the third to lead 31-13.

Lanier closed the door on the victory on a 14-yard pass from Blackford to Cole Thornton less than two minutes into the fourth quarter.

AHS was unsuccessful on an onside kick attempt to start the game. The Wildcat defense, however, prevented Lanier from converting a fourth-and-6 at the AHS 27-yard line.

On the second play of its initial offensive possession, AHS found the end zone on a misdirection run by Shaan Cook to take an early 7-0 lead following Adrian Lopez’s extra-point kick. Cook was later injured in the game and his absence was big, Lotti said.

Lanier responded with a seven-play, 60-yard drive, capped by a 10-yard run by Barnes with 4:24 remaining in the opening quarter.

Needing a quality drive of their own, the Wildcats never got the chance as they lost a fumble on the ensuing kickoff. The Longhorns took possession at the AHS 20-yard line but lost five yards on the drive. AHS then delivered on special teams, blocking a 42-yard field goal attempt.

Lanier eventually took its first lead on a 3-yard run by Barnes with 8:45 left in the first half. That score was set up by an AHS fumble deep inside Wildcat territory after a Longhorn punt was downed at the 5.

AHS moved inside Longhorn territory in an attempt to answer, but the drive stalled at the 24. Jared Clark made a 30-yard run to start the possession for the Wildcats.

Lanier regained possession after forcing an incomplete pass on fourth-and-11. Barnes then had a 43-yard run to put his team back in scoring position. Barnes, one of the top backs in the region, then capped the drive with a 9-yard score with 3:27 left before halftime.

The Longhorns stretched their lead to 28-7 in the final minute on a 23-yard pass from Blackford to Tyler Washington.

“We had some bad breaks tonight but we can’t use that as an excuse,” Lotti said. “The kids are coming out each day in practice and each Friday night giving all they have. That’s all I can ask for.”

AHS will travel to Gainesville High School on Friday, Nov. 1, in a must-win region game. Lanier will host Dacula in what will be one of the top matchups of the week in the state. The winner will win the region title and be a No. 1 seed for the playoffs.