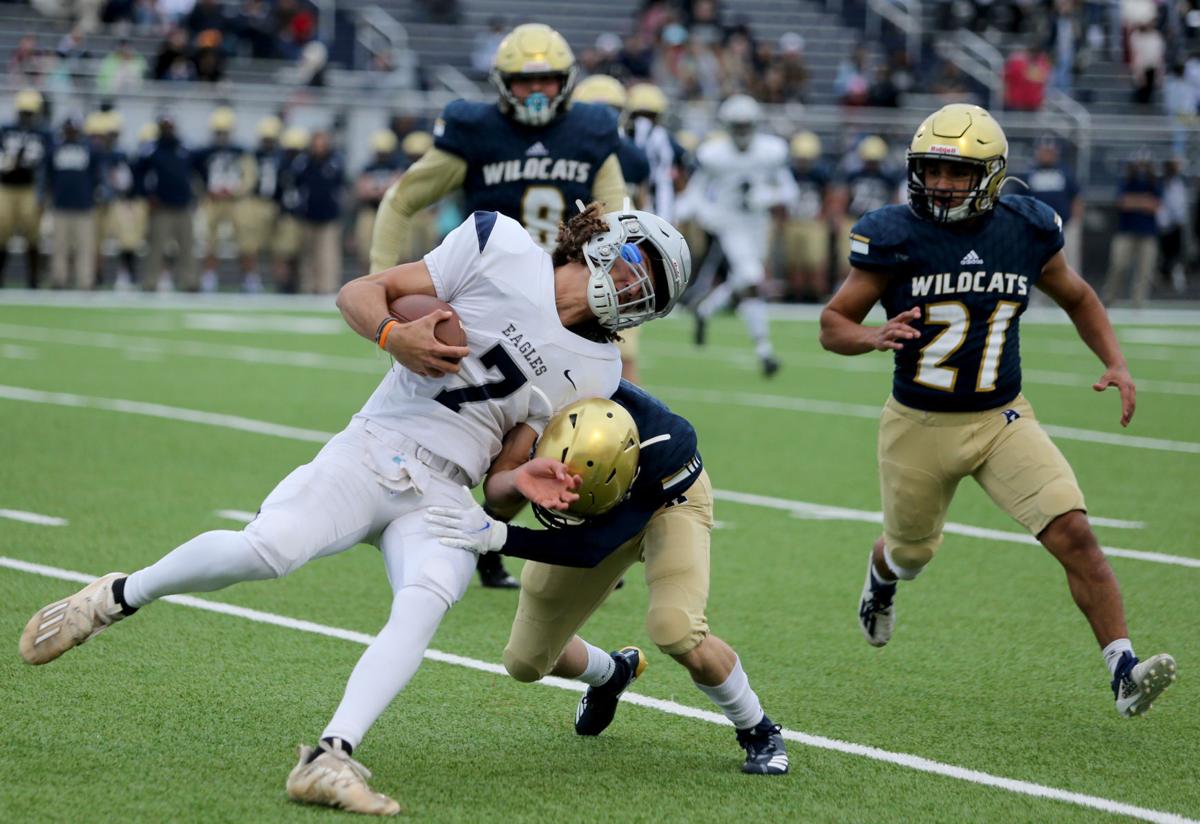 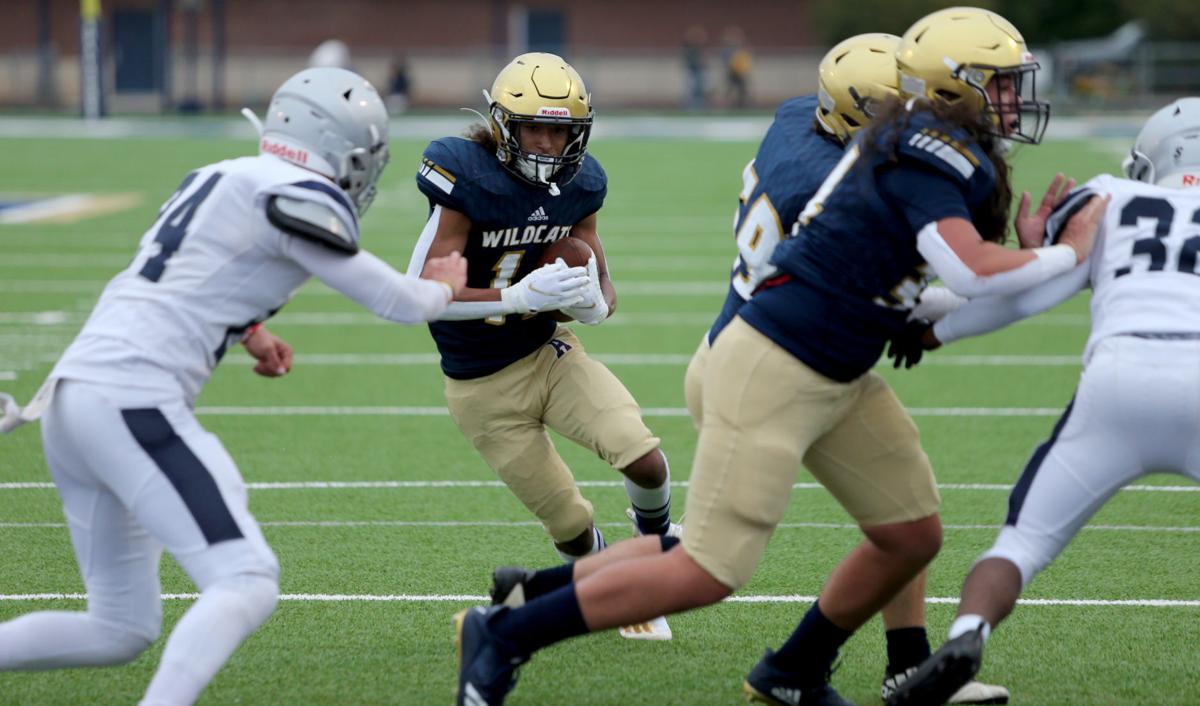 Apalachee's Deven White scores on a 1-yard run during first half of the Wildcats' scrimmage against East Jackson. 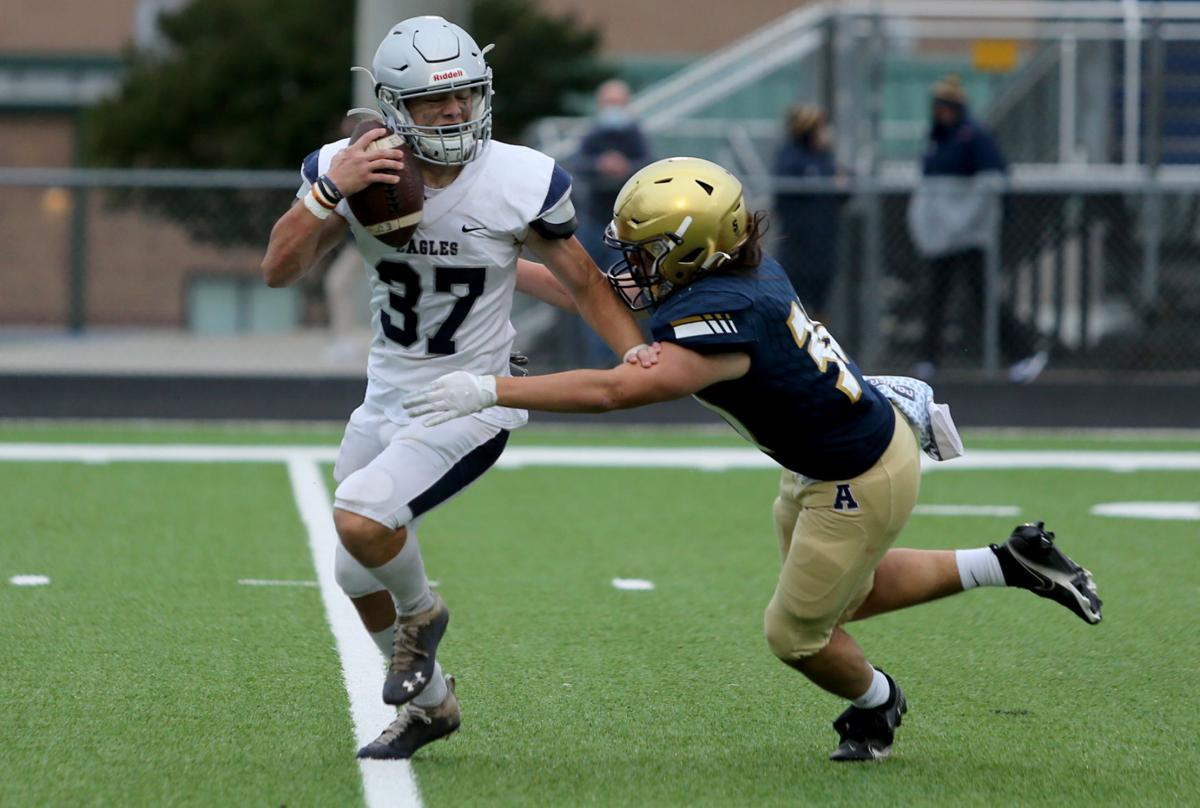 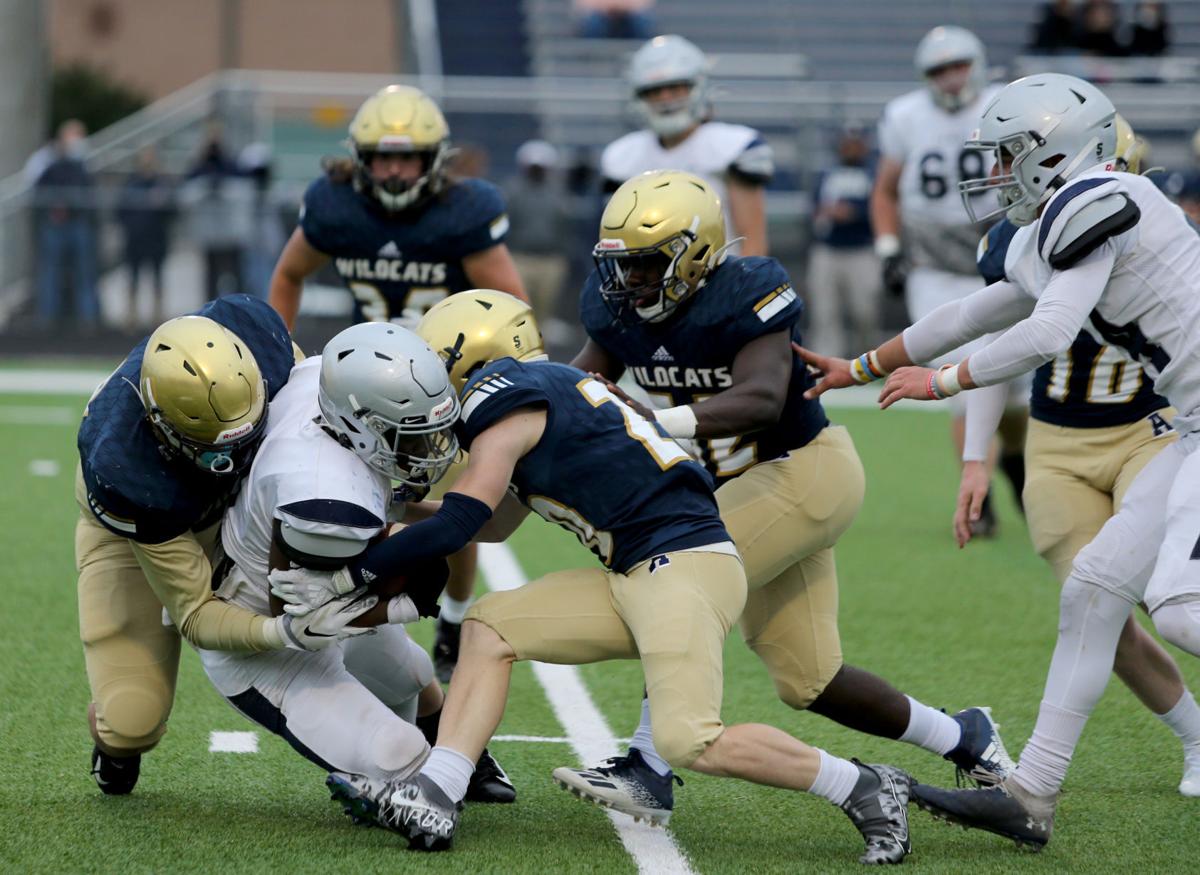 Apalachee defenders swarm around an East Jackson runner during the spring scrimmage. 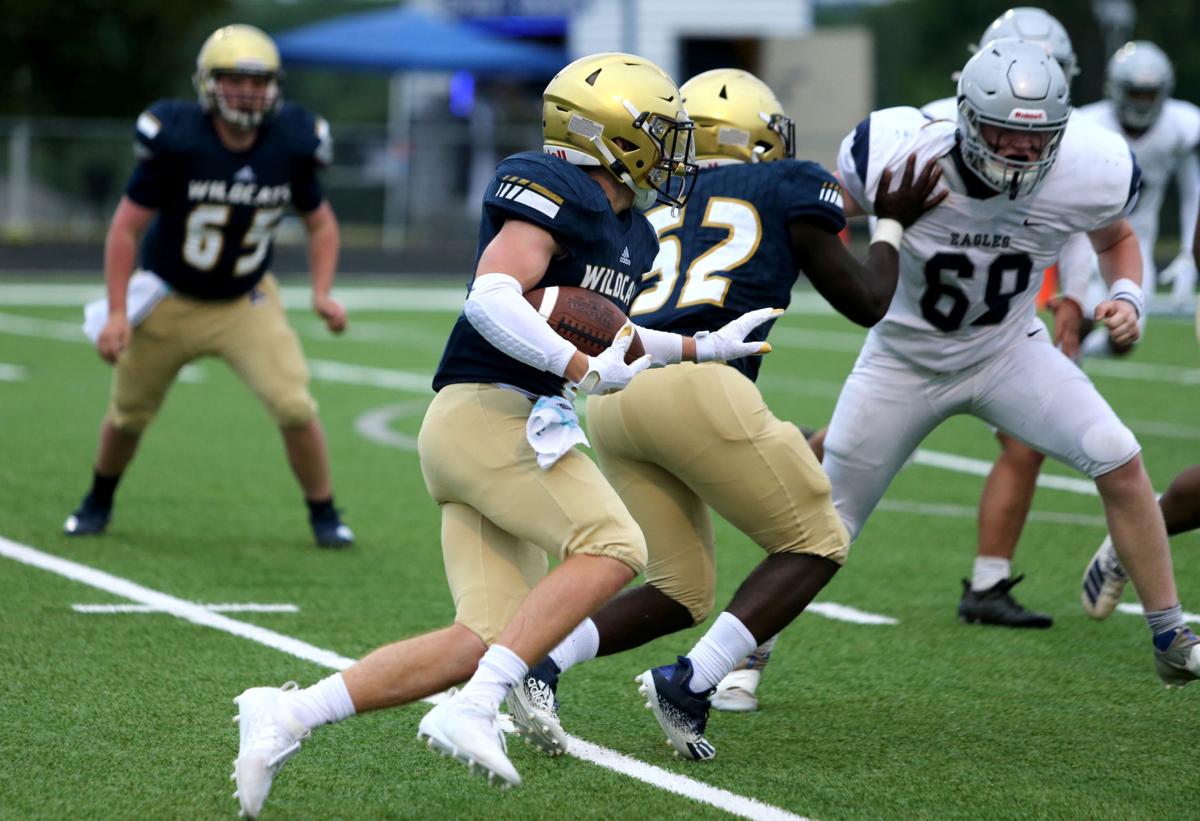 Apalachee's Colby Sikes had a 62-yard touchdown run and caught a pass for a score in the Wildcats' spring scrimmage win over East Jackson. 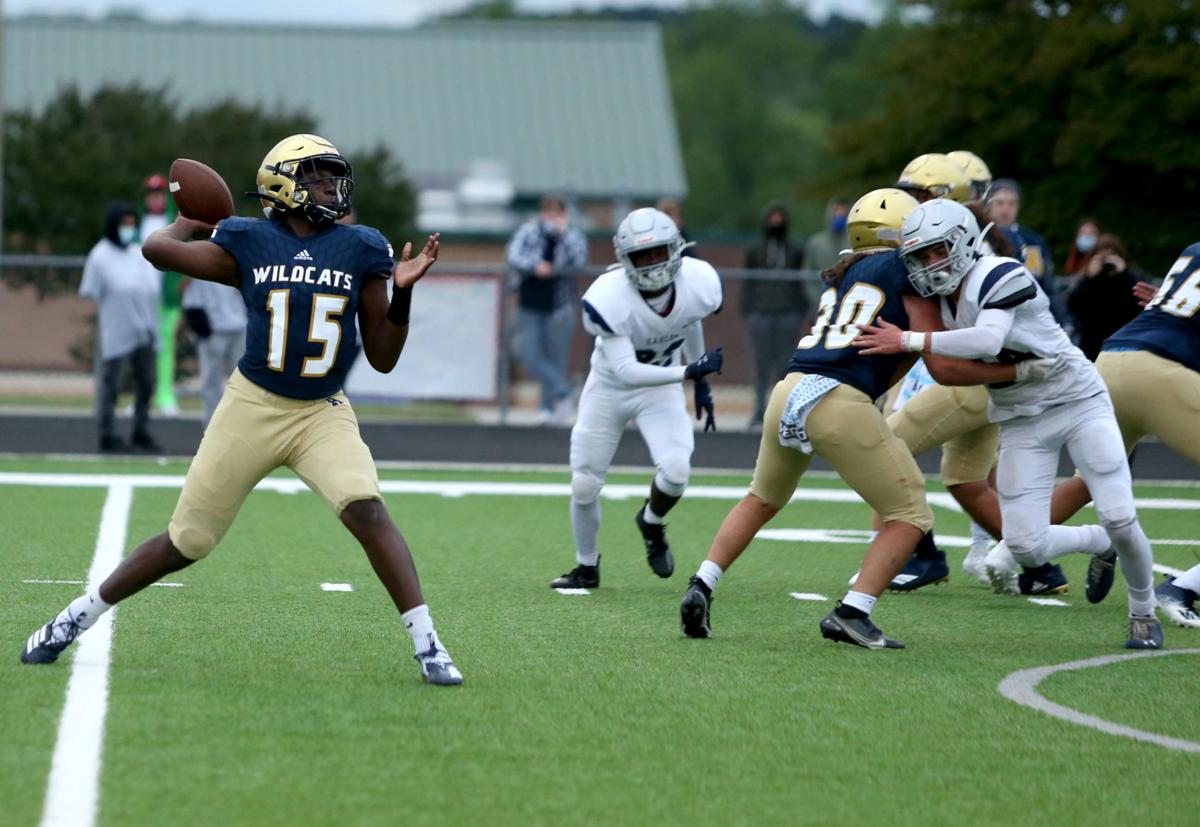 Apalachee's Howard Holloway throws a pass during the spring scrimmage. 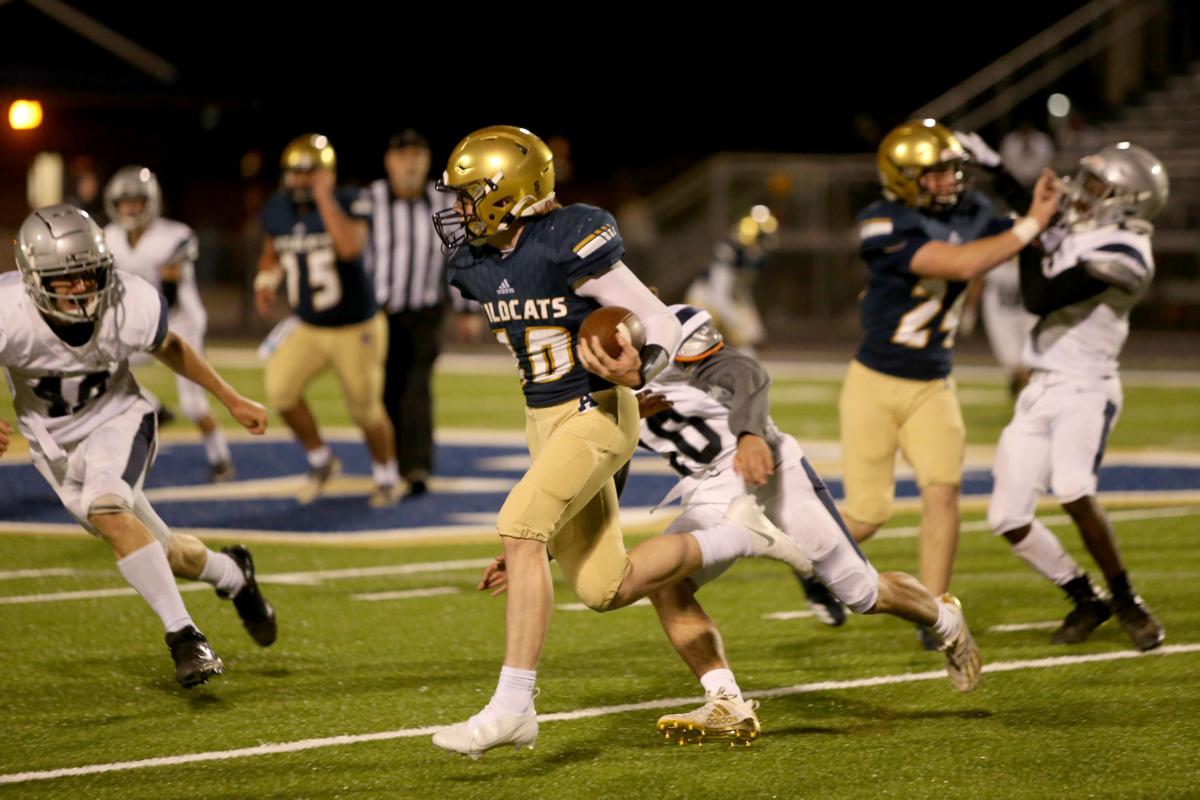 Apalachee quarterback Isaiah Skinner carries the ball during the second half of the Wildcats' spring scrimmage win over East Jackson May 12.

Apalachee's Deven White scores on a 1-yard run during first half of the Wildcats' scrimmage against East Jackson.

Apalachee defenders swarm around an East Jackson runner during the spring scrimmage.

Apalachee's Colby Sikes had a 62-yard touchdown run and caught a pass for a score in the Wildcats' spring scrimmage win over East Jackson.

Apalachee's Howard Holloway throws a pass during the spring scrimmage.

Apalachee quarterback Isaiah Skinner carries the ball during the second half of the Wildcats' spring scrimmage win over East Jackson May 12.

Apalachee head football coach Tony Lotti wanted to play a lot of players and, more importantly for him, assess several younger players in certain situations, during the Wildcats’ spring scrimmage Wednesday, May 12.

Lotti accomplished that goal and left the game with some positive feelings about the team’s direction heading into summer conditioning and the next steps in preparation for the 2021 season.

In a dress rehearsal to close out its two-week spring practice — complete with late football season-like weather — Apalachee rolled to a 44-14 scrimmage win over visiting East Jackson on an unseasonably chilly night at R. Harold Harrison Stadium.

Colby Sikes scored on a 62-yard run on Apalachee’s third play from scrimmage and added a diving grab in the end zone late in the first half to help fuel the Wildcats’ lopsided victory. No score was kept on the scoreboard.

“We played a lot of guys that we needed to look at, and my focus was on looking at those situational things, and it was a very productive night from that perspective,” Lotti said. “You had two programs trying to make themselves better, and hats off to (East Jackson head coach Cameron Pettus). We’ve been going against them the last couple of springs, and you can tell they’re definitely getting better under his leadership and going in the right direction, and we’re hoping for the same from our program.”

Apalachee led 17-14 late in the first half before scoring 27 unanswered points to win the scrimmage convincingly.

Sikes’ early 62-yard jaunt on a handoff up the middle gave the Wildcats a 7-0 lead at the 8:06 mark in the first quarter.

East Jackson answered with a 1-yard touchdown run from quarterback Randy Smith on its second possession to tie the score at 7-7. Smith keyed the touchdown with a 68-yard run, stiff-arming an Apalachee defender near the line of scrimmage and outrunning another on the perimeter to break free for the big gainer.

Smith left the game following the drive due to concussion protocol.

The Wildcats responded with an eight-play scoring drive capped by a 1-yard touchdown run from Deven White with 2:54 left in the first quarter. Sikes picked up 33 yards on the second play of the drive, and White later followed with a 19-yard run to the Eagle 1-yard line, setting up his own score.

Wildcat rising senior placekicker Brody Ham, back from a season-ending injury in the middle of the 2020 campaign, added a 25-yard field goal at the 6:59 mark in the second quarter, pushing the lead to 17-7.

The Eagles scored late in the first half on a 75-yard touchdown drive engineered by backup quarterback Tyler Crow. Crow hit tight end Ethan Ardis on a 16-yard completion on third-and-10 to put ball inside the Wildcat 10 and scored on a 9-yard touchdown on the next play to close the gap to 17-14 with 1:42 remaining before halftime.

Apalachee quarterback Howard Holloway, however, guided the Wildcats down the field on a two-minute drill, putting the offense deep in Eagle territory with a 39-yard completion to Edwin Ellis. Three plays later, Sikes laid out for a grab in the back of the end zone on a 7-yard throw from Holloway to put Apalachee ahead 24-14 with just 40 seconds remaining in the first half.

Holloway, a rising sophomore, got the starting nod behind center as the Wildcats seek to replace the graduating Todd Jones, and he impressed Lotti with his situational play. The Wildcats also got a solid performance at quarterback from rising senior Isaiah Skinner, who engineered a couple of second-half scoring drives and scored on a 1-yard keeper, after picking up 34 yards on a carry one play earlier, to push Apalachee’s advantage to 37-14 with 10:46 left in the contest.

“(Holloway) threw the ball well and ran the team well,” Lotti said. “I was looking for his ability to game-manage and I was very pleased with that, and then Isaiah came in and kept it going. There’s a good little battle going on right there (for the starting job), and they’re really pushing each other. We’ve got a long way to go and a lot of work to do before August, but I’m pleased with what I saw.”

Meanwhile, Sikes, a rising senior and returning two-way starter who got a large share of the carries with a couple of running backs from the depth chart out this spring due to track and field commitments, showed he is ready to pick up where he left off in his breakout 2020 season that saw him lead Wildcats in rushing in the absence of injured senior running back Tauheed Ferguson and tie for the team lead in receptions and touchdown catches, earning all-region honors. Rising junior Elijah Verne got an extended look in the backfield in the second half and scored on a pair of touchdown runs, including one on the final play of the game.

“(Sikes) is a solid player. He really is,” Lotti said. “He’s doing everything I’m wanting him to do as a guy who leads by example, and he brings a lot to the table. And you look at all those kids we have up front like Tyler Ferro and Jordan Shaw and Elijah Harris and Joseph Bentley. All those guys did a great job, and I feel like our defensive front is going to be a strong point for us this coming season.”

The big takeaway for Lotti: The Wildcats had promising results, but still have plenty to work on in order to get up to speed for their Aug. 20 season opener at rival Winder-Barrow.

“We’re looking to put the pieces together, but I like the makeup of this team,” Lotti said. “They’re a really fun group and are doing everything we ask of them. Things like that show up in a Friday night game. And Friday nights will sometimes expose things that happen throughout a week. Football reveals character, and our guys are doing a good job of focusing on doing the right things and letting the rest take care of itself.

“I’m excited about where we’re going.”

Ben Munro of The Jackson Herald contributed to this story.