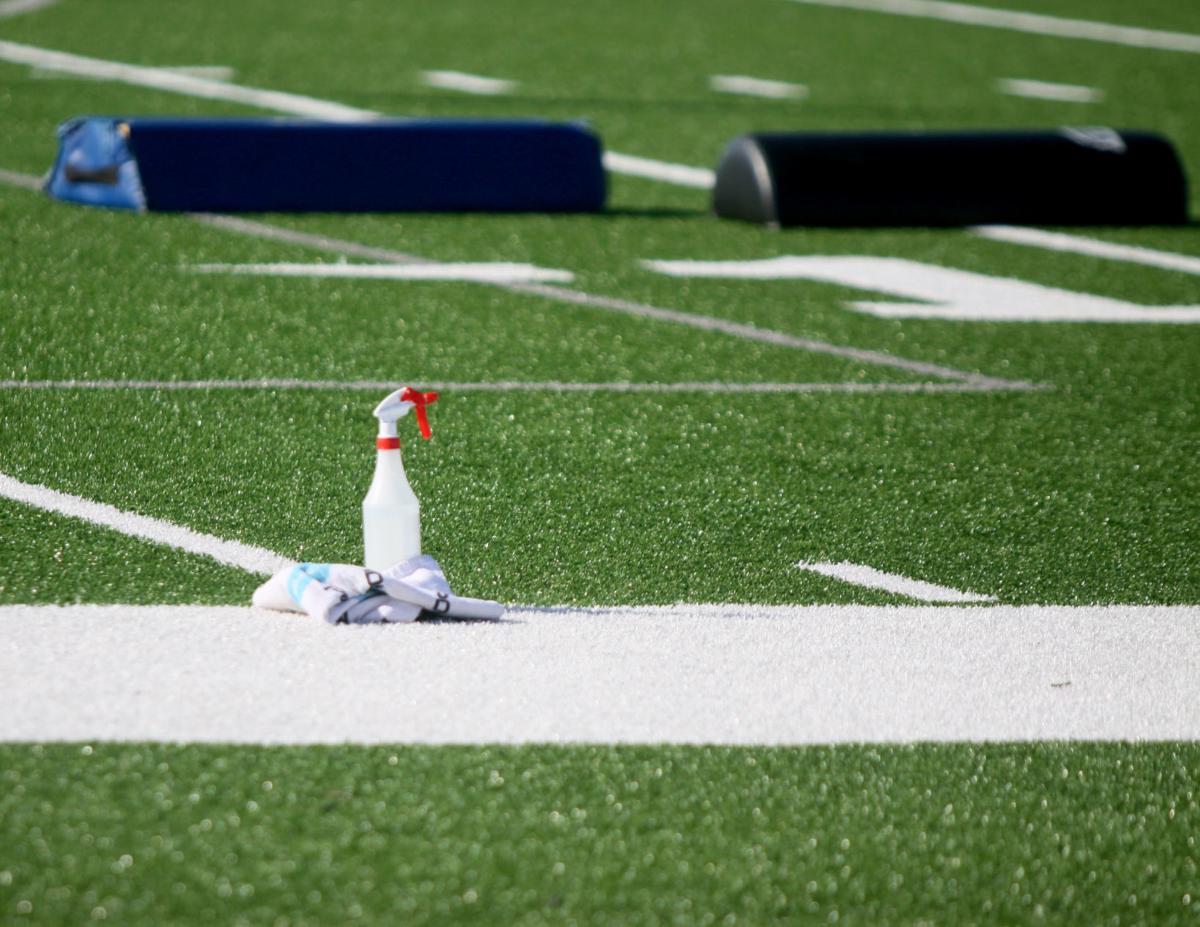 A bottle of cleaning solution sits on the sidelines of R. Harold Harrison Stadium on Tuesday morning, July 14, during an Apalachee High School football team summer workout. The athletic programs around the county are putting extra cleaning and sanitation measures in place as they hope to start the fall sports season on time amid the coronavirus pandemic. 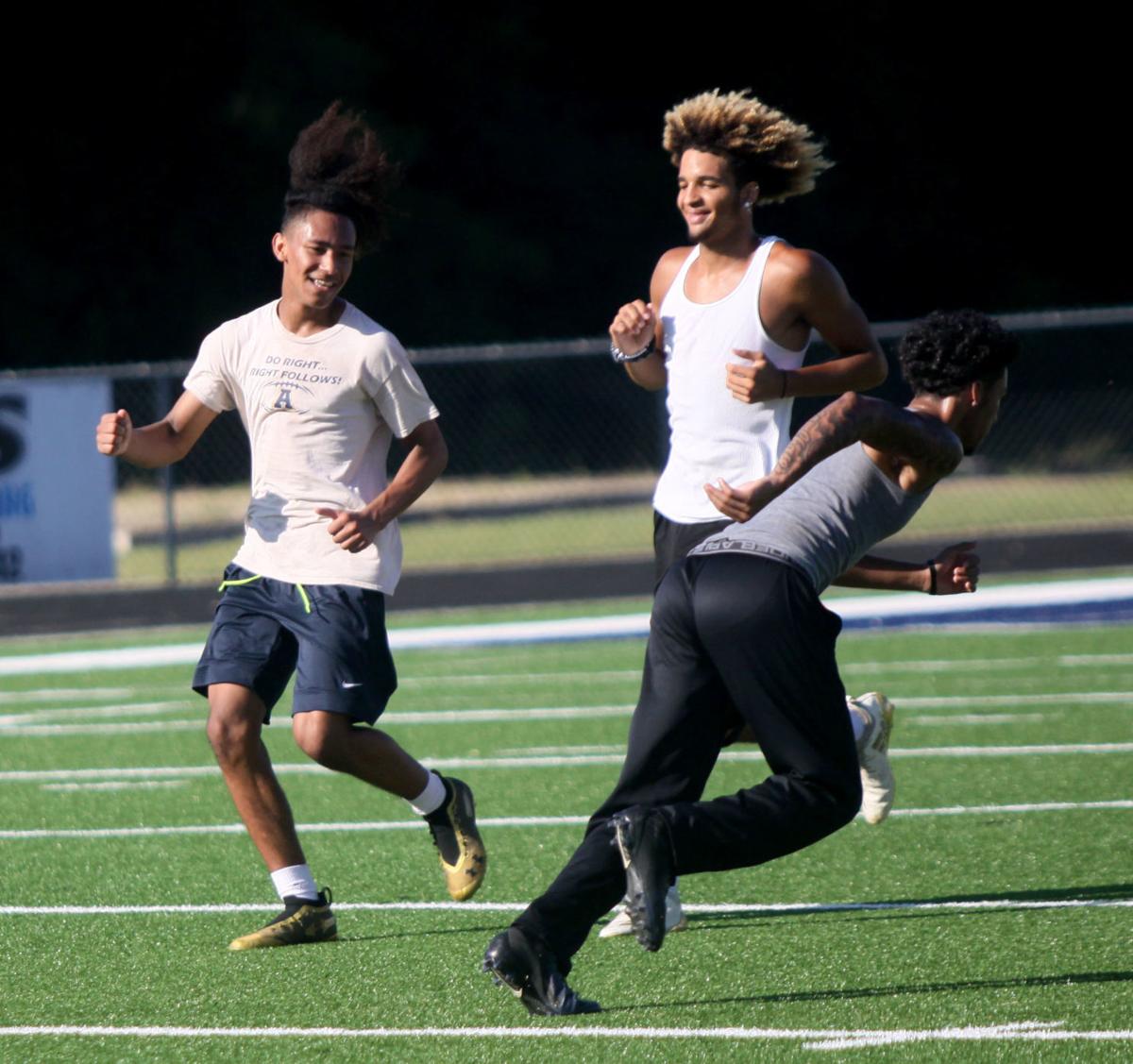 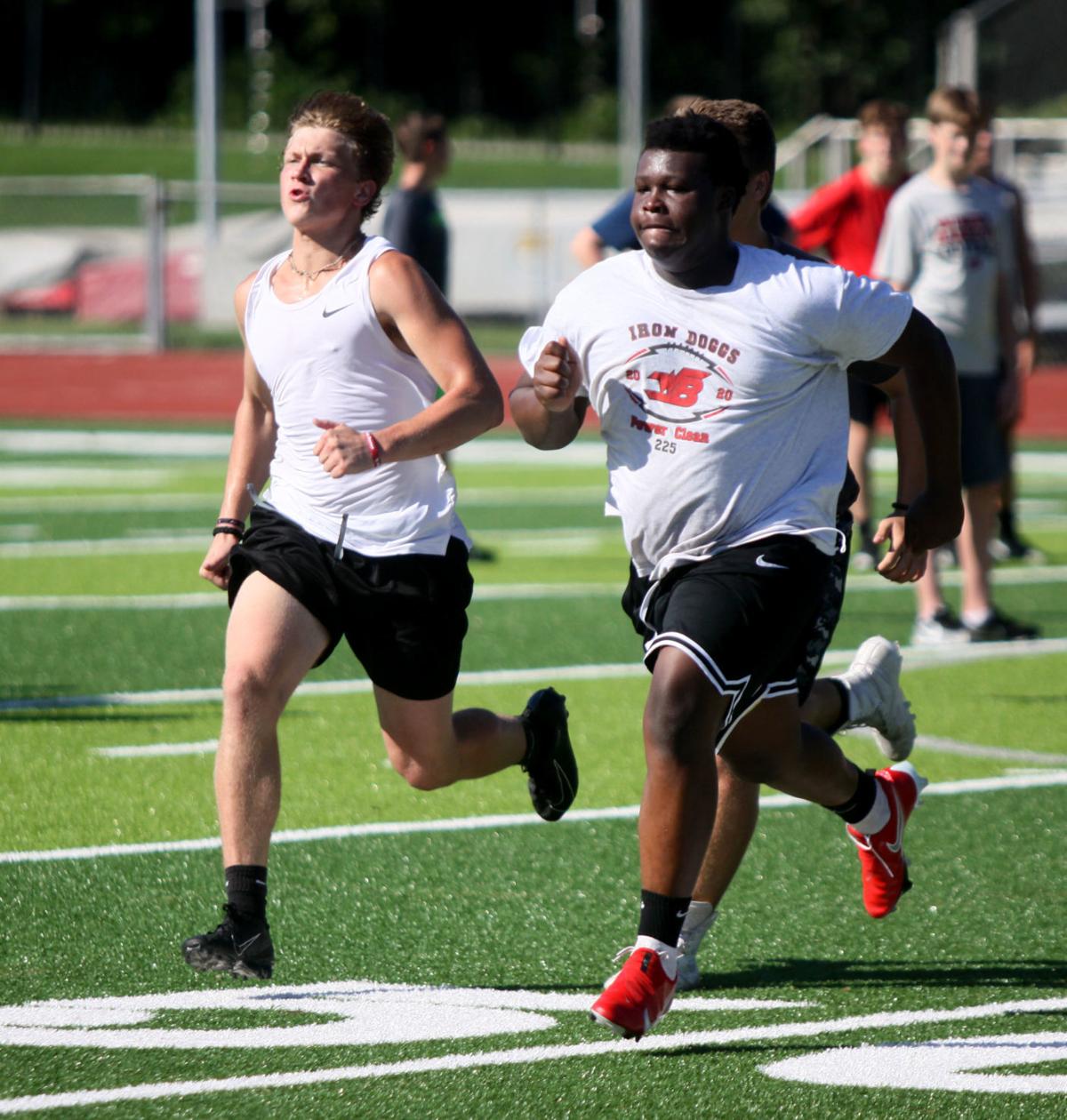 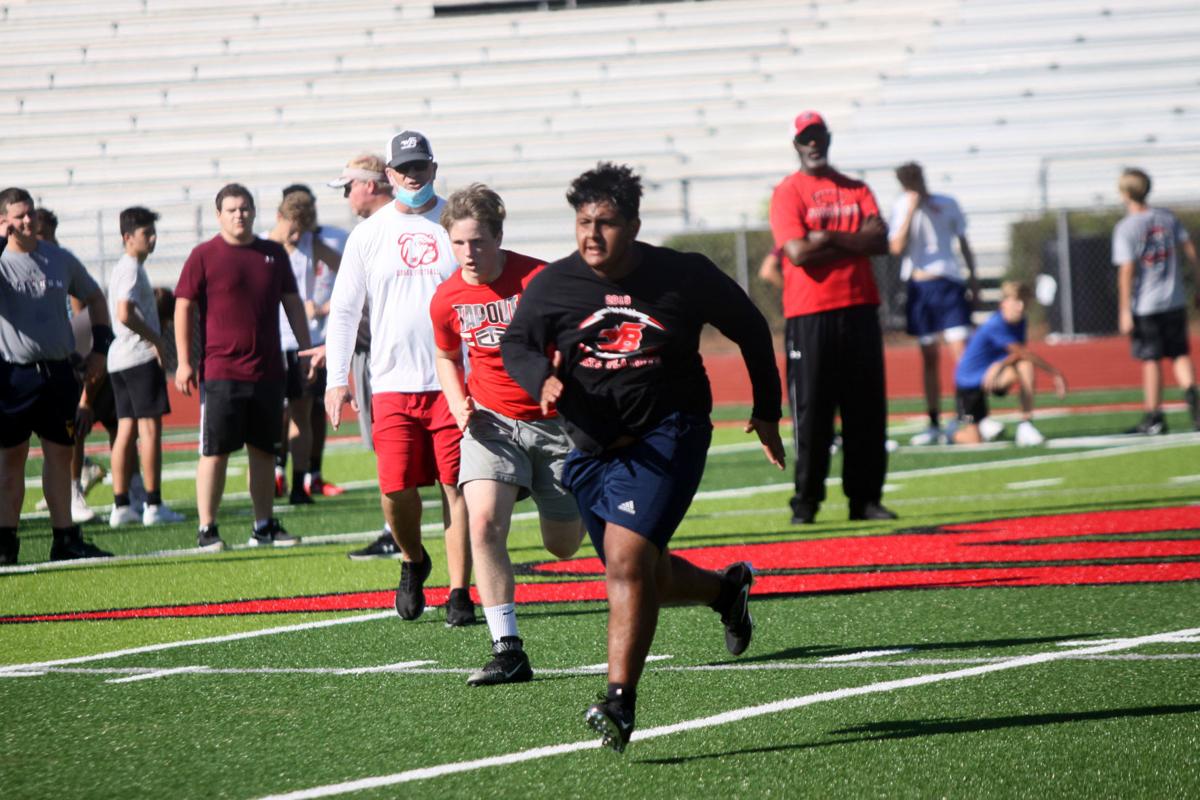 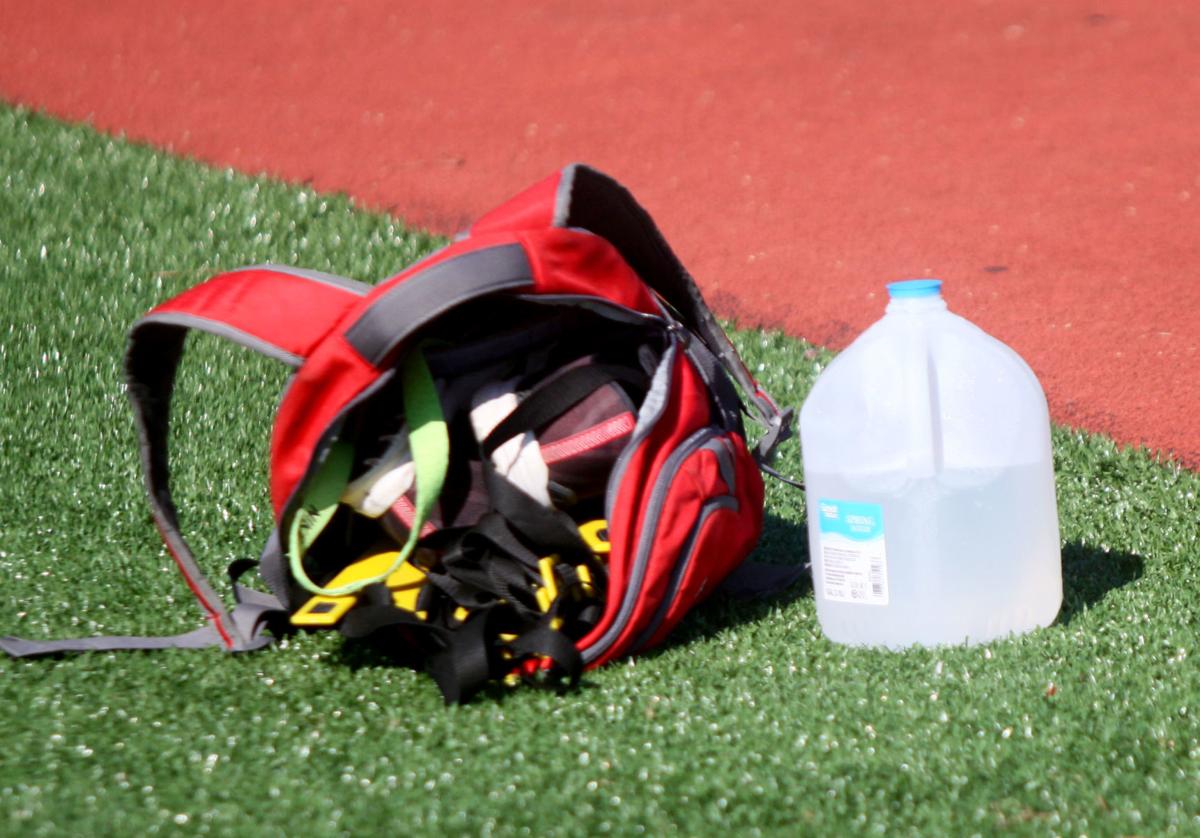 In a sign of the times, football players and other athletes have had to bring their own personal water bottles and jugs to summer practices as a GHSA-imposed preventative measure to try to stop the spread of COVID-19.

A bottle of cleaning solution sits on the sidelines of R. Harold Harrison Stadium on Tuesday morning, July 14, during an Apalachee High School football team summer workout. The athletic programs around the county are putting extra cleaning and sanitation measures in place as they hope to start the fall sports season on time amid the coronavirus pandemic.

In a sign of the times, football players and other athletes have had to bring their own personal water bottles and jugs to summer practices as a GHSA-imposed preventative measure to try to stop the spread of COVID-19.

Coaches are typically creatures of habit, and that has made the day-to-day uncertainty during the ongoing coronavirus pandemic that much harder to take for Apalachee High School head football coach Tony Lotti.

Lotti has described himself as so meticulous that he typically plans all team activities several months in advance — all the way down to the order and flow of team picture day. But he, along with all the other coaches around the state the last few months, has had to sideline his normal routines as questions continue to swirl around the upcoming Georgia High School Association fall sports season.

Will games be played?

Will the seasons start on time?

And will the competitions be held in front of spectators?

The latest indications from GHSA officials are that all those things will happen. But with the volatility of the situation and a recent new surge in coronavirus cases across the state and much of the entire country, the current plans could be put on hold or upended at any time.

“(The start of football season) is coming fast and we’re still limited in what we can do and what we’re doing,” Lotti said last week. “For me, having to go week by week has been more awful than anything. I can’t even plan for next week now because I don’t know for sure what they’re going to say we can and can’t do.”

“It’s definitely been very different,” Ed Dudley, Lotti’s counterpart across town at Winder-Barrow High School, said of the altered summer schedule. “But the participation has been good. The players have had a great attitude and the parents have been able to roll with it. The coaches probably take it harder than anyone. I think the unknown and always having that hang over your head is the hardest thing to deal with. Everybody wants to know when the people in charge are going to make their decisions, but they have to use the latest information available to them.

“Everything’s got to be done around the health and safety of the student-athletes.”

While school systems’ approaches to reopening for the 2020-21 academic year — informed by guidance from the state department of education and the CDC — have varied around the state, Barrow County plans to start traditional classes Aug. 4 as scheduled, with an option for students to enroll in digital learning while still being eligible to participate in athletics and various other extra-curricular activities. However, district officials have stressed that the plans are not set in stone, and the campuses could be shut down again if the virus reaches a more substantial spread level in the school or around the community.

How the school system chooses to maneuver through the pandemic will largely dictate the activities of the athletic programs at Apalachee and Winder-Barrow, along with the junior-varsity programs being offered this fall at the new Barrow Arts and Sciences Academy (softball, volleyball, cross country, cheerleading).

As the pandemic began uprooting everyday life for people around the country and the world back in March, schools and high school sports were not spared. After an order in early April by Gov. Brian Kemp mandated the closure of Georgia’s public schools to in-person instruction for the remainder of the academic year, the GHSA canceled the remainder of its spring sports season.

GHSA executive director Robin Hines told the Atlanta Journal-Constitution recently that the association plans to move forward with starting all fall sports on time but that it wouldn’t hesitate to shut down athletics if the situation worsens or in the event of another order by Kemp.

“I think we’re still optimistic about starting on time, but I’m a little more heavily concerned now than I was the previous couple of weeks,” said Al Darby, the former Winder-Barrow principal who is now the Barrow school district’s chief administrative officer for athletics and student affairs. “I would say the optimism has gone down some and the red flags have gone up significantly. I think it could go either way. We could see a delay. There are things that are being talked about on a constant, daily basis, and we’ve got a compact window of time to make these decisions. But we just don’t have any definitive answers yet.”

Even with a recent surge in infections around the state, the GHSA relaxed some restrictions on team activities as of July 6, but there are still some limitations in place. Teams were allowed to begin holding intrasquad activities (such as 7-on-7 competitions in football) last week and are now allowed to have groupings of up to 50 players at once during a practice. But they are still not allowed to scrimmage other schools as of earlier this week.

Under the current restrictions, football teams are also limited in what competitive activities they can realistically do because they are still not allowed to wear helmets, even with the start of mandatory practice less than two weeks away and full-padded practice still currently slated to begin Aug. 1.

Lotti said one of his primary concerns at the moment is getting his players adequately conditioned to play in the summer heat and making sure they’re properly-hydrated, especially with the GHSA rule that athletes for now have to bring their own personal water bottle to workouts and practices.

“We’re only going to have a few days in pads before we play a game,” said Lotti, whose team’s Aug. 7 scrimmage against East Jackson (postponed from the spring) remains on the schedule as of now, followed by another preseason tune-up against on Commerce on Aug. 14 before their regular-season opener against Winder-Barrow on Aug. 21. “The heat always stays at the forefront of my mind and it’s something we’re constantly monitoring. We’ve gotten a good taste the past few workouts of how muggy it can be this time of year, but it’s still a different story when you get out there and get the pads on.”

When the school closures forced the cancellation of spring practice and prohibited access to weight facilities, Lotti and Dudley had to switch to limited virtual communication with their players through Google Classroom and home workout programs.

“I think most of our guys are in pretty good shape, but along with COVID, you’ve got those classic battles of heat acclimation and conditioning,” Dudley said. “I’m pretty confident that our guys will be ready to play whenever the season starts. But everyone is obviously monitoring this situation very carefully, and I think, as coaches, we need to be even more flexible and be able to change on the fly.

“We just have to make the best of this situation. You can lose sight as high school coaches of what the real mission is if you’re not careful. We’re supposed to be using sports to build the kids up as young men outside of the classroom. I think football provides that value to individuals.”

Darby said while he was surprised at the latest relaxations by the GHSA, given the current virus outlook in Georgia, the athletic programs around Barrow County have been strictly following the protocols and exercising due caution. He said two cross-country runners — one at Apalachee and another at Winder-Barrow — recently tested positive for COVID-19 and were still under quarantine as of last week. Neither one had any known contact with their teammates after their exposure, he said, adding there were no other known infections or pending test results among the district’s other athletic teams as of last week.

“We are continuing to sanitize and clean thoroughly and following all those recommendations,” Darby said. “We’re trying to be consistent across the board, and I think we’ve done a good job communicating with the public. We want to make sure we build that confidence and trust among the parents and guardians that we’re doing everything we can to keep their kids safe.”

But as the start of fall sports rapidly draws near, the question still remains: Will the student-athletes be competing in front of their family members, fellow students and fans? And if so, what, if any, crowd restrictions — whether imposed locally or at the state level — will be in place?

That’s an issue weighing heavily on Barrow County school officials’ minds with the annual Battle of Barrow football game, which generally draws a packed-out crowd at the AHS and WBHS stadiums, slated to kick the year off.

“It’s something we’re all thinking about: how can we enforce social distancing and try to keep people safer,” Darby said. “None of these measures have been hashed out at the GHSA level. But the timetable is moving and the window’s closing. And the spike (in cases) is happening.

“There are just so many moving parts. It’s like playing a game of chess.”

Lotti is hopeful that the Wildcats and Bulldoggs will play in front of a full crowd at R. Harold Harrison Stadium just over five weeks from now and that it will be a positive experience for Barrow County.

“Everyone has been through a lot since March. This thing has really taken a toll on all of us,” he said. “We’ve always talked to our kids about the hygiene side of things when we’ve dealt with things like the flu because all it takes is one kid to get it and it can run through your team. Now we’re emphasizing to our guys the importance of wearing a mask, not going out in public unless you have to and keeping a distance between each other when possible, and I hope everyone else will follow that.

“I would hope that the decision-makers (on whether to allow spectators at games) look at this from all angles. Obviously, you want to try to keep everybody safe, but you also have to decide what is the overall best thing for the kids and the community. Maybe we require mask-wearing. Maybe we spread people out. There are a lot of options there.

“But in my opinion, if we’re in school, we should be playing. And after we’ve grown more isolated from each other, football is a way of bringing the community back together.”