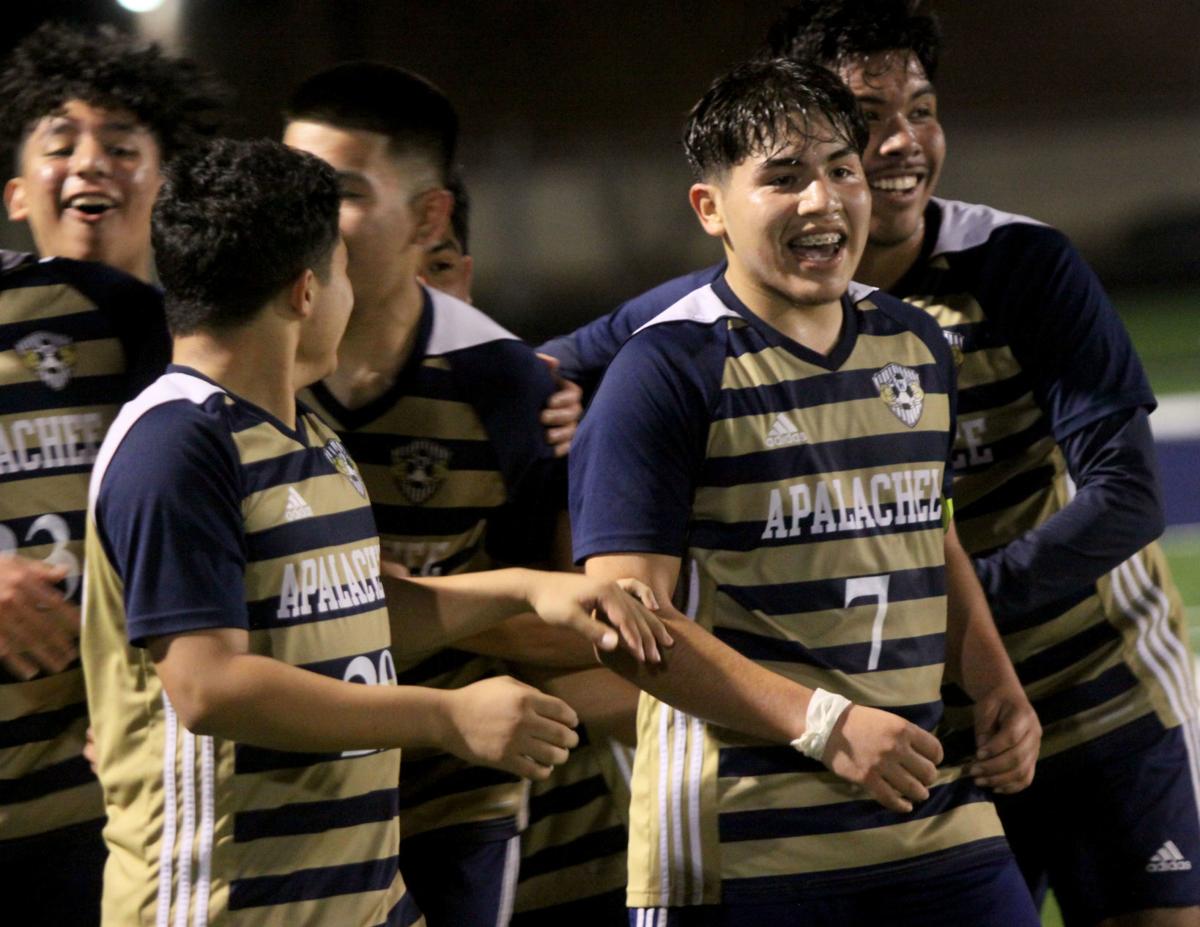 Apalachee's Jorge Bazan (7) celebrates with teammates following the Wildcats' 2-1 win over Winder-Barrow on Friday, March 13. Bazan scored the winning goal with 10:31 left in the match. 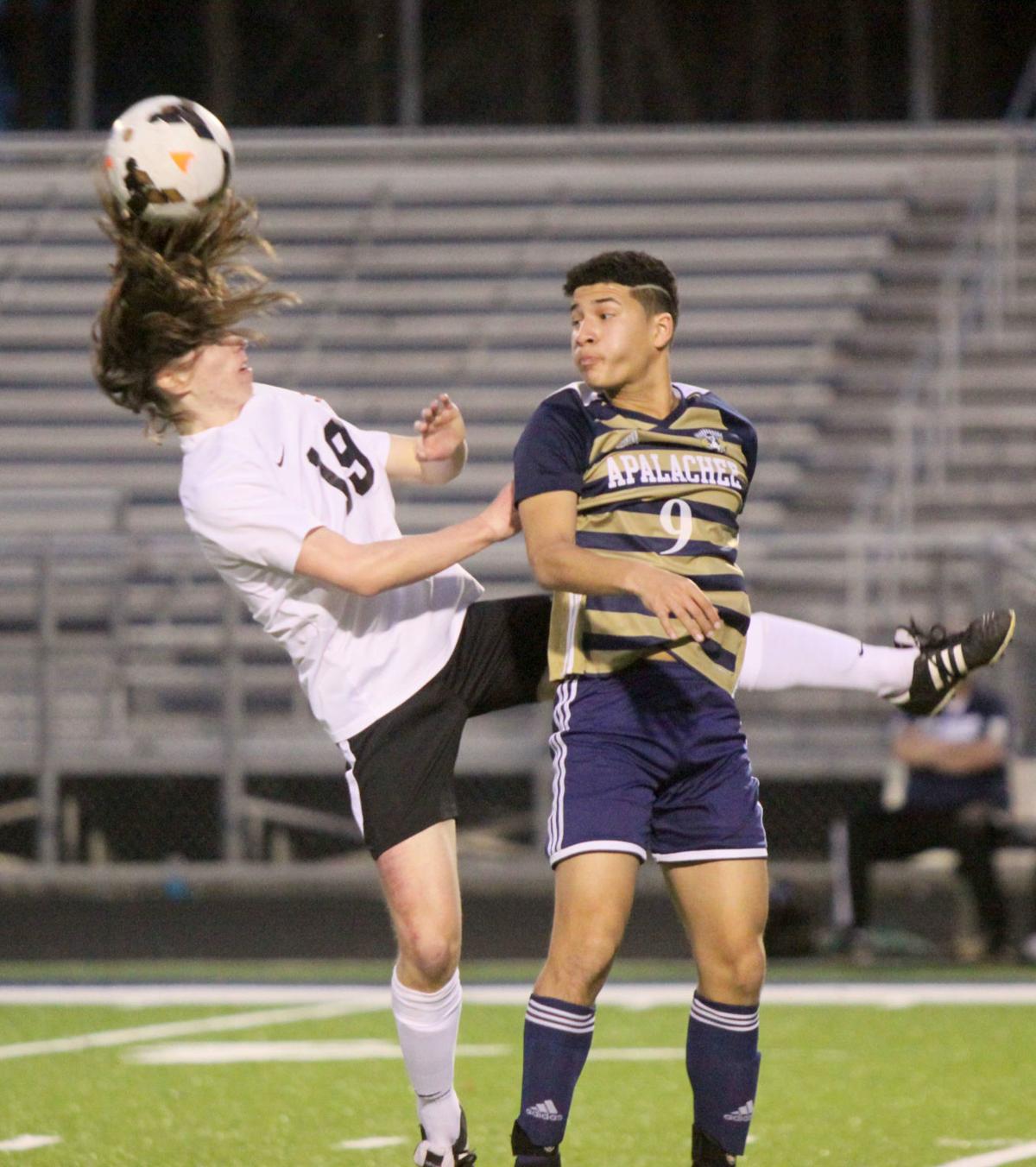 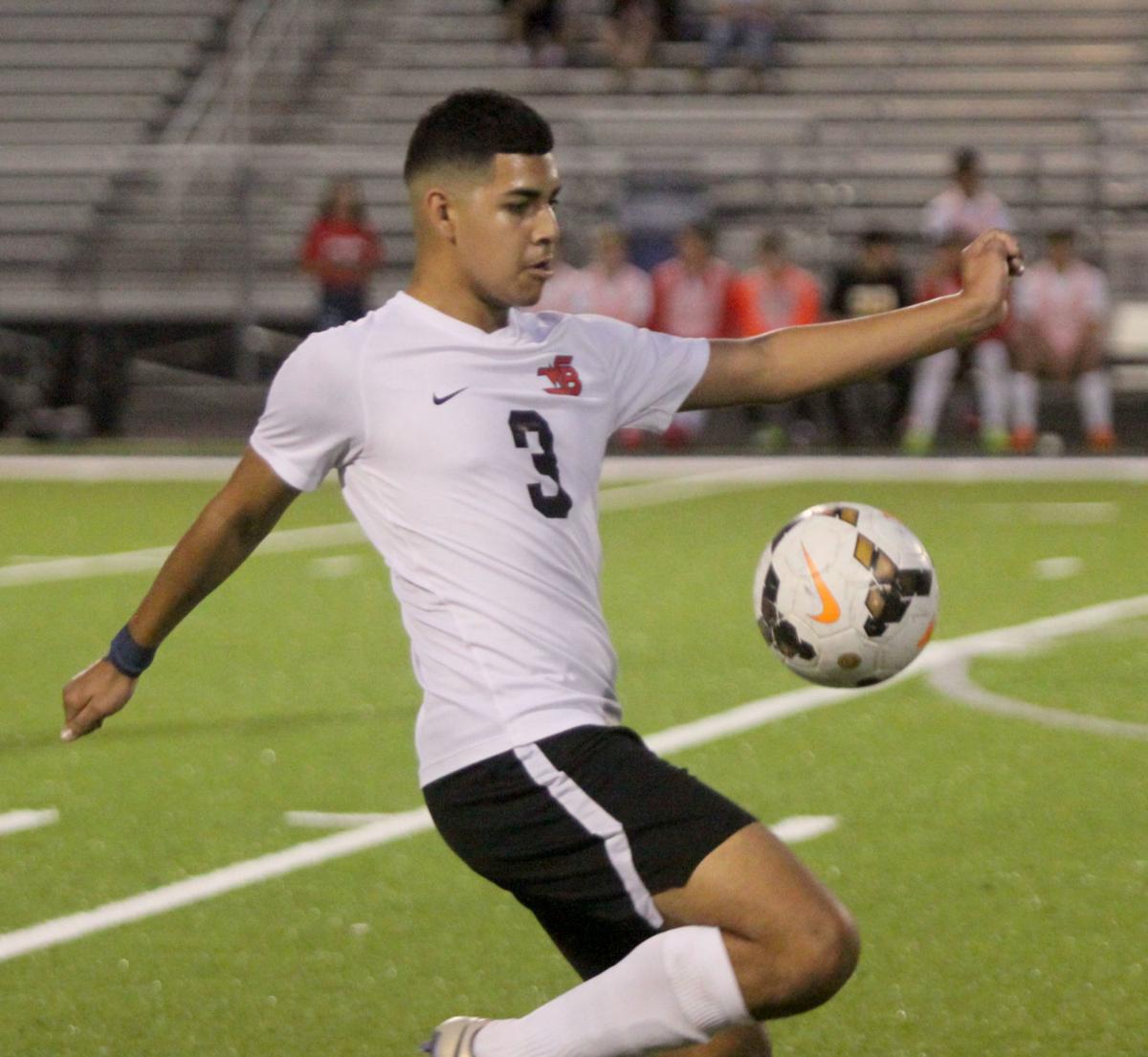 Winder-Barrow's Efrain Alvarado controls the ball during the first half against Apalachee. 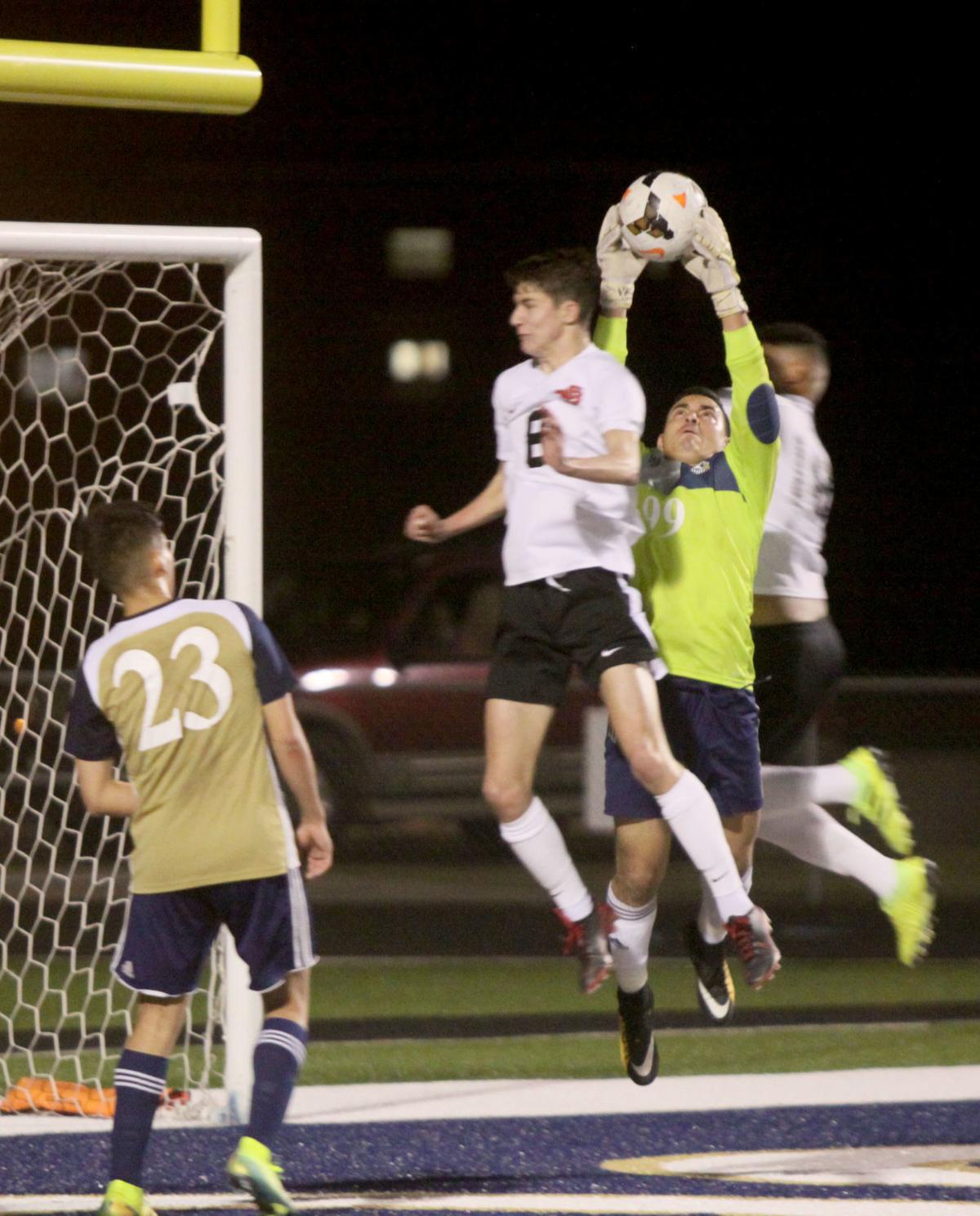 Apalachee goalkeeper Ronal Galindo comes up with a save off a Winder-Barrow corner kick. 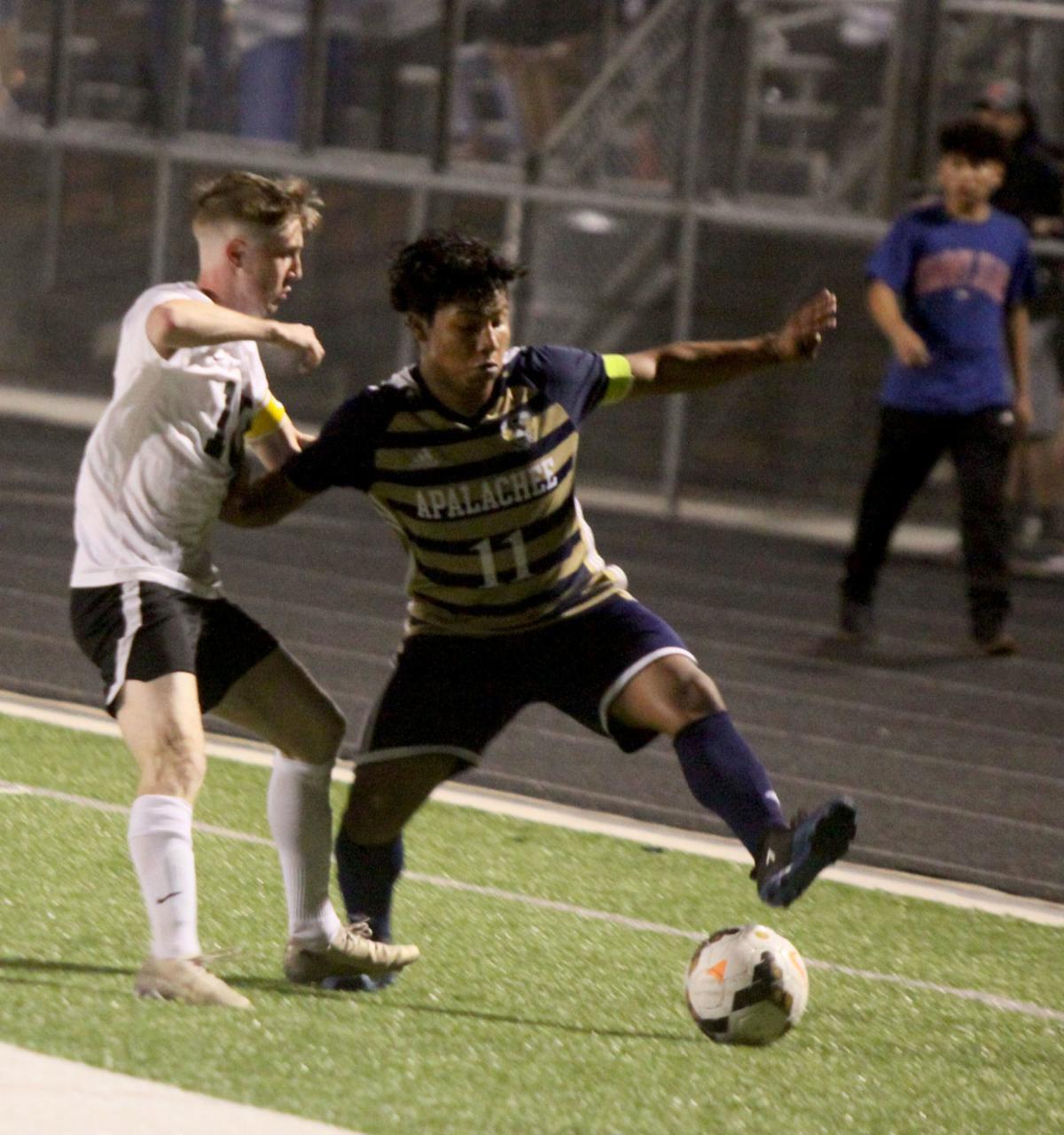 Apalachee's Emerson Rivas works against Winder-Barrow's Will Perry for control of the ball. 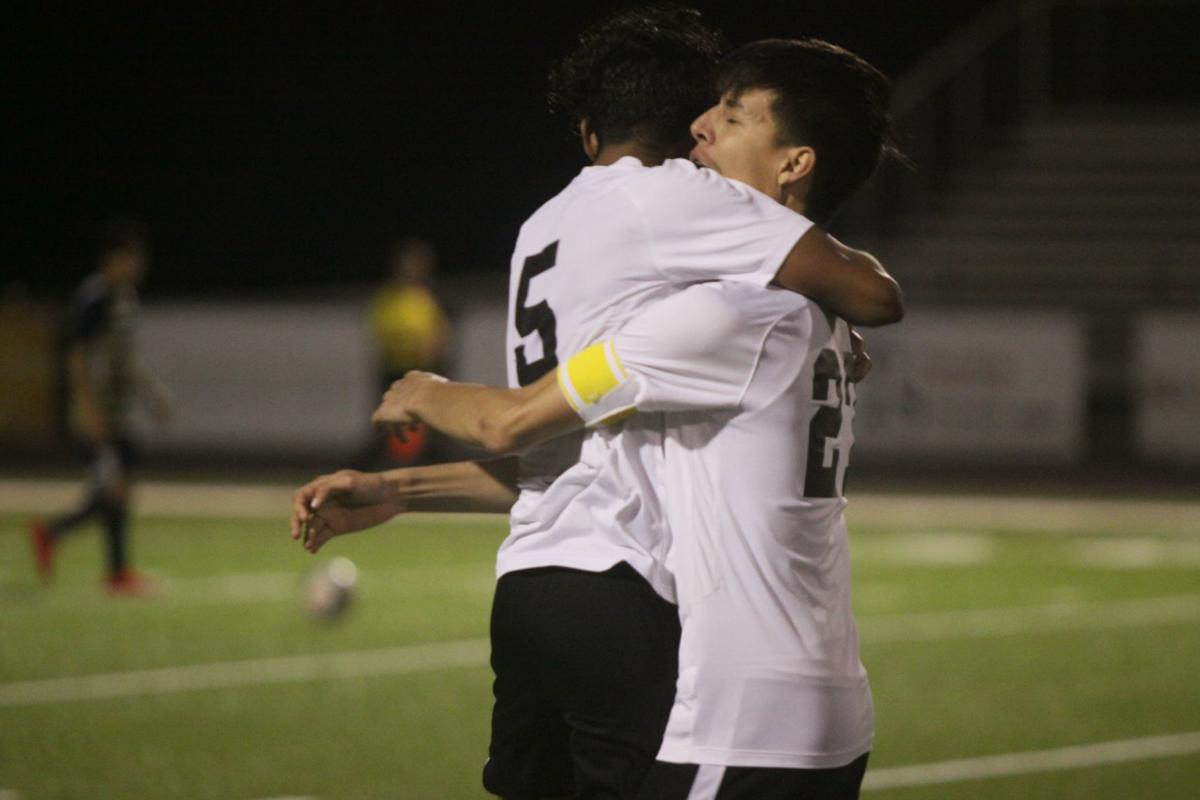 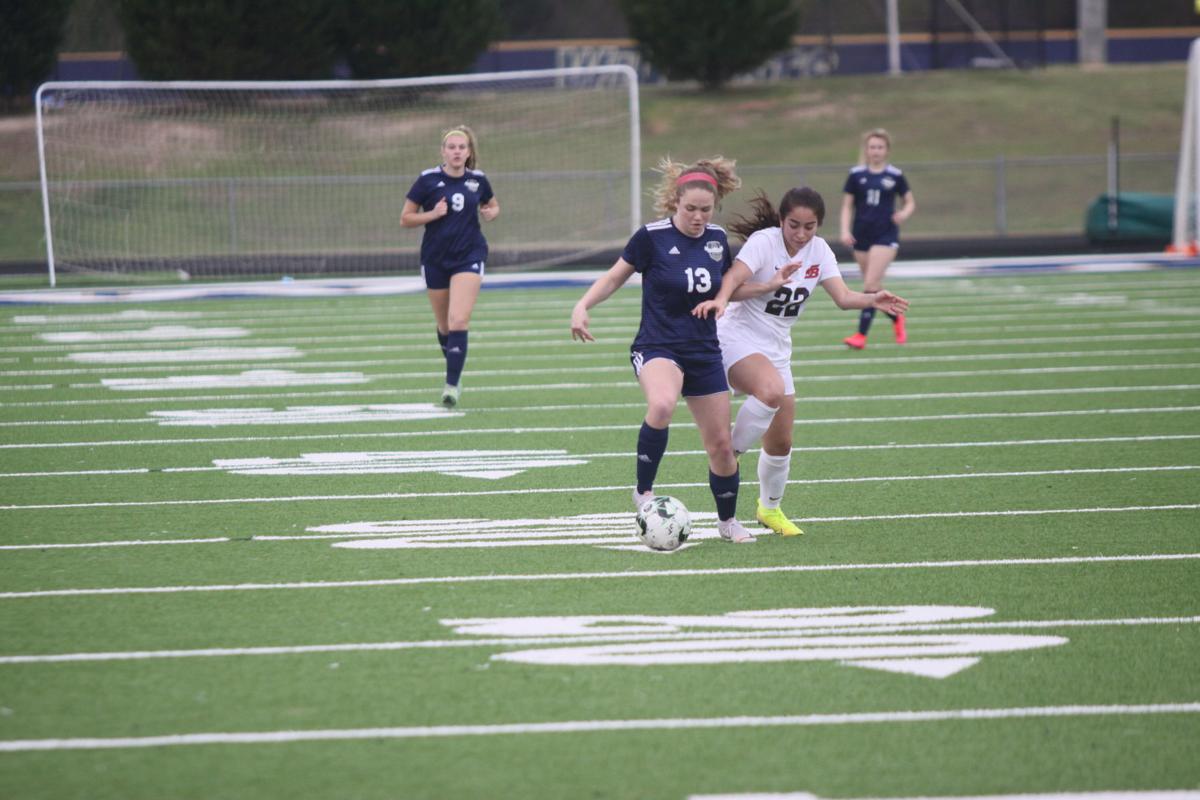 Apalachee's Bailey Hope Arnold battles for the ball against Winder-Barrow's Vanessa Vazquez during the Lady Wildcats' 4-0 win on Friday, March 13. 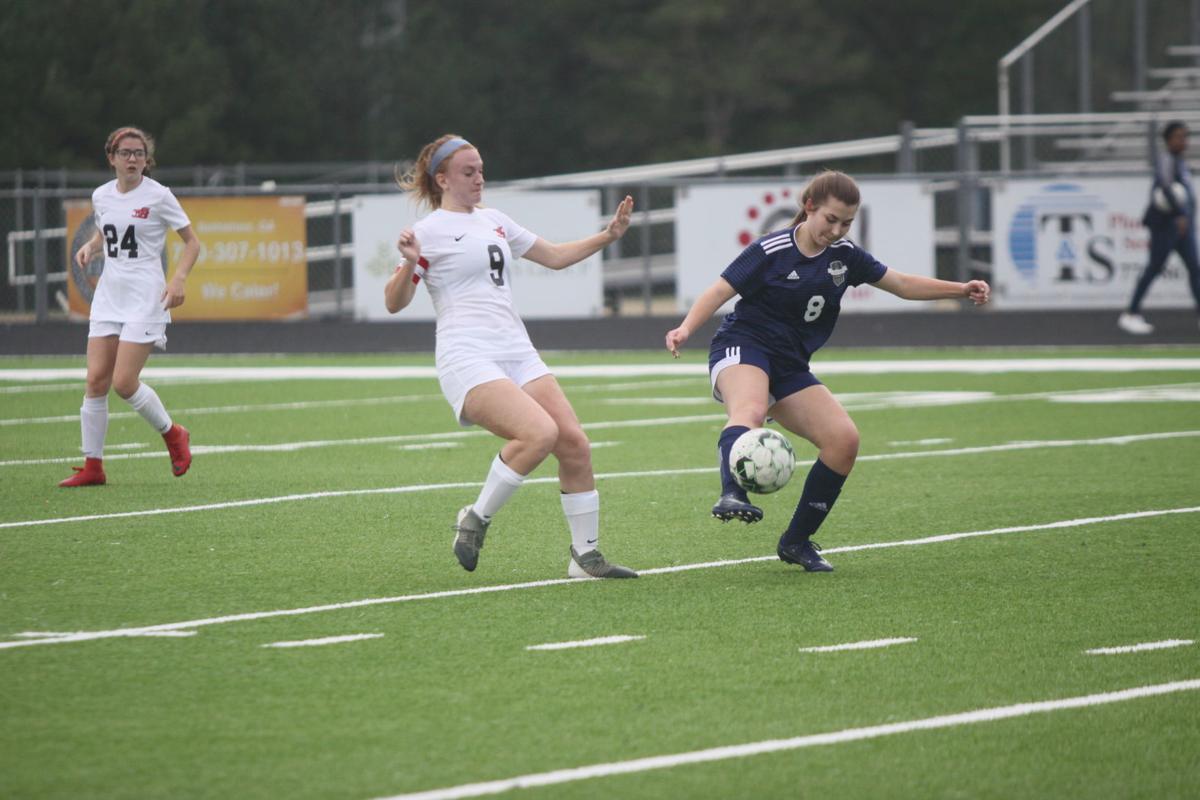 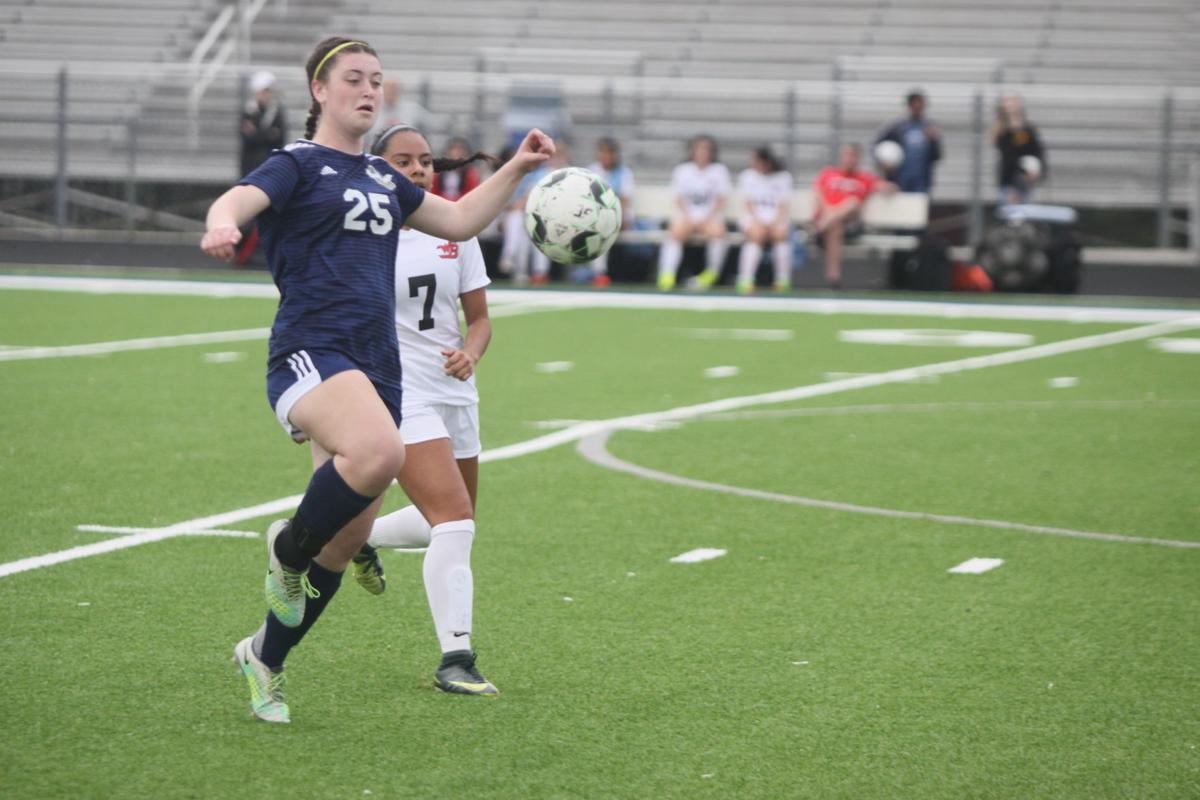 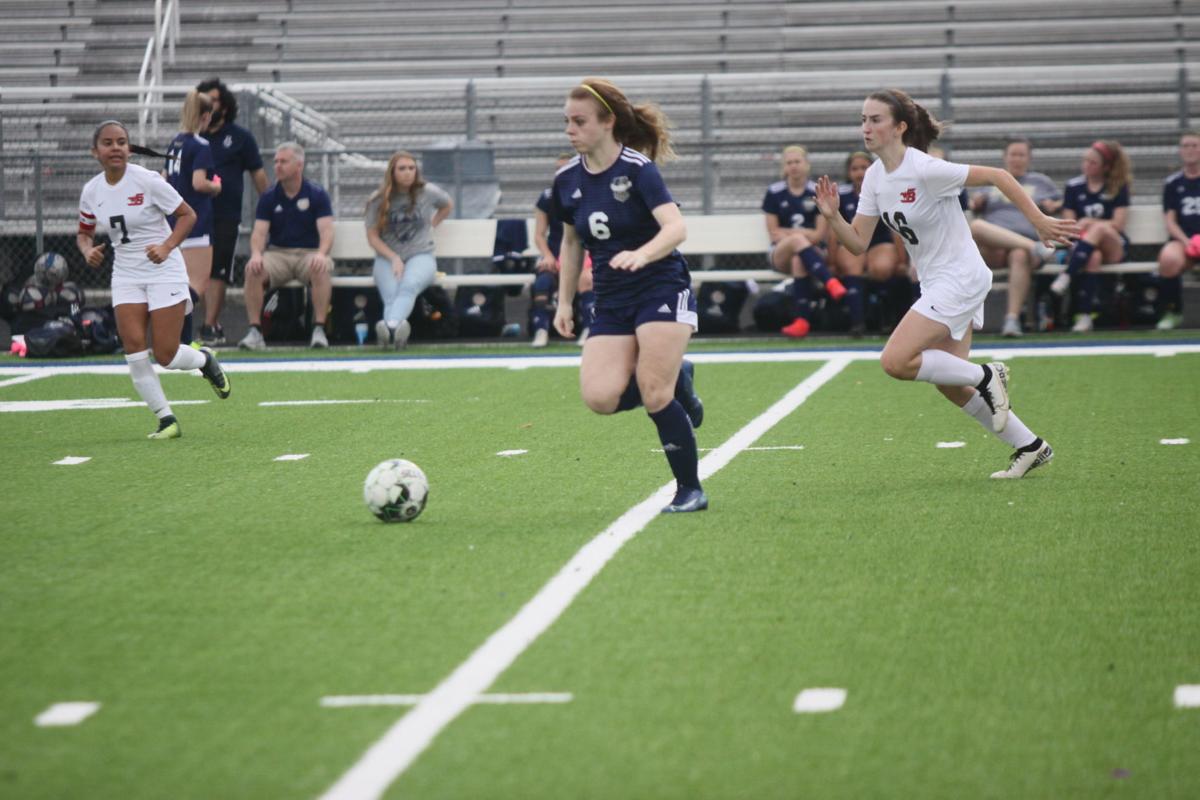 Apalachee's Skylar Gordon works the ball up the field against Winder-Barrow. 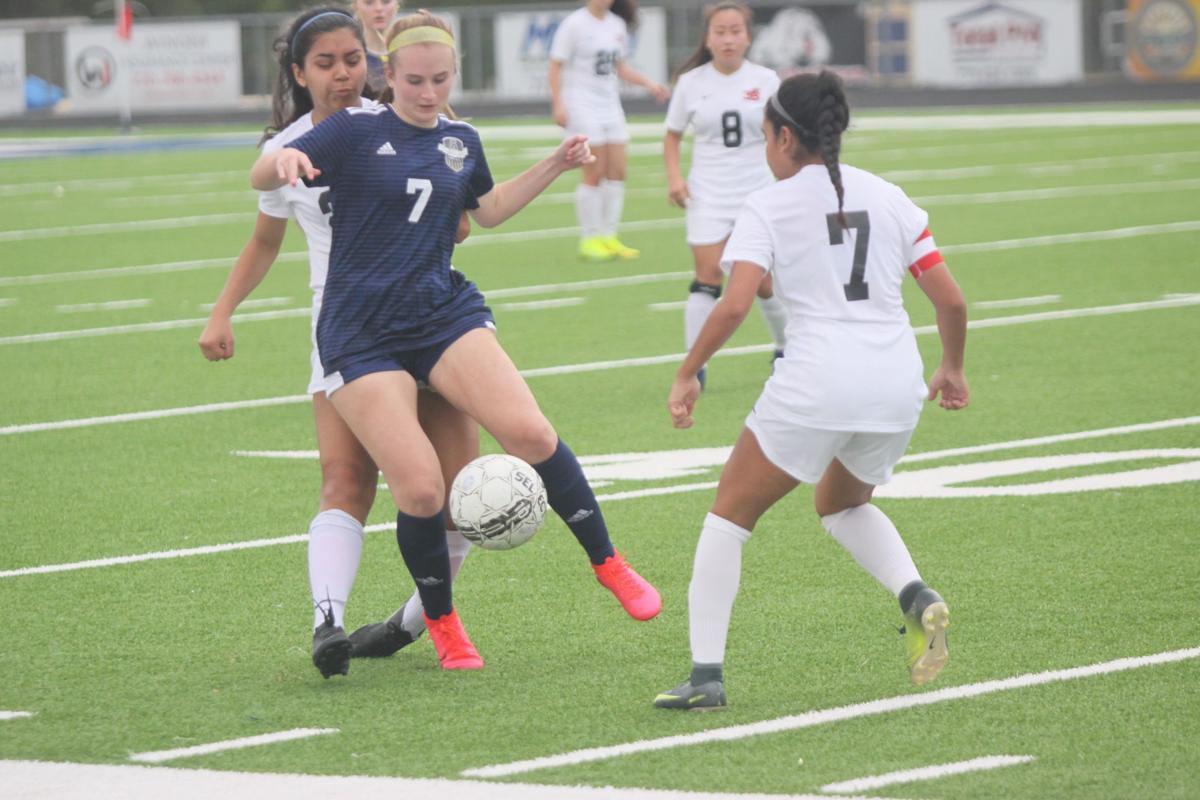 Apalachee's Erin Allen looks to turn the ball up while being defended during the Lady Wildcats' match against Winder-Barrow. 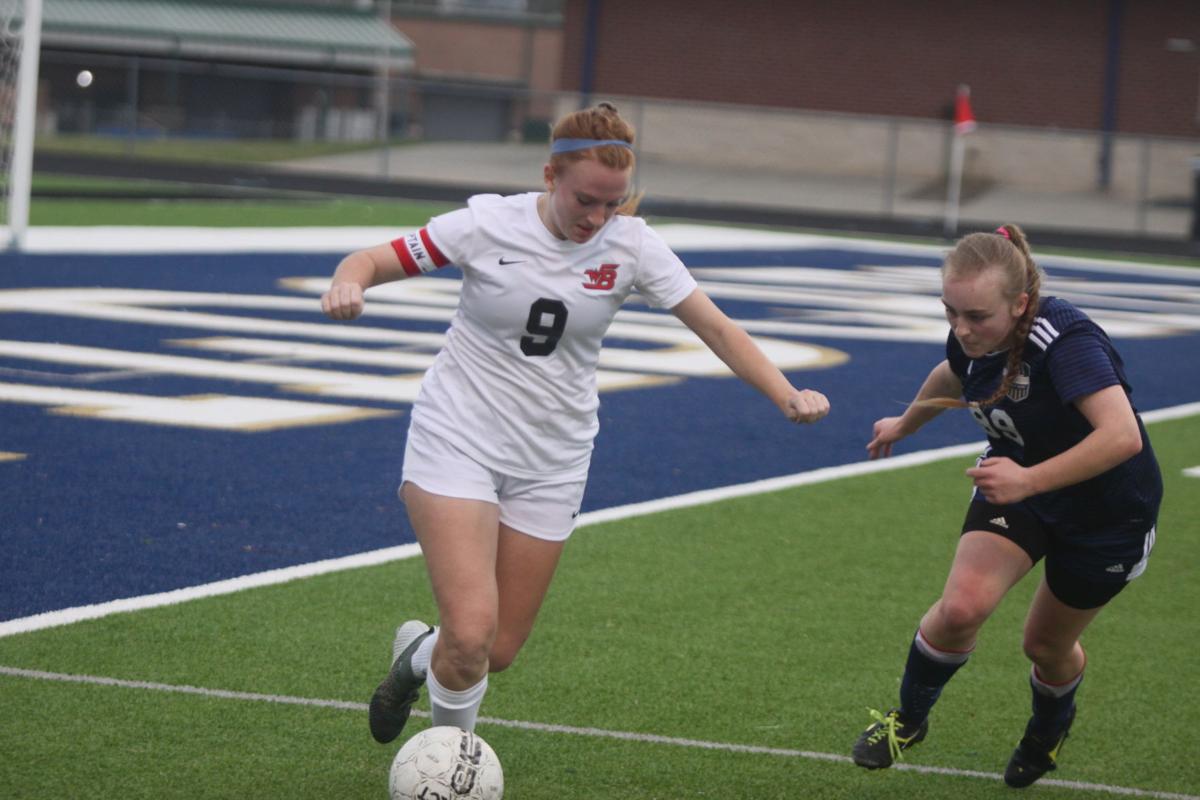 Winder-Barrow defender Rachel Howard looks to clear the ball out with Apalachee's Emily Hale in pursuit.

Apalachee's Jorge Bazan (7) celebrates with teammates following the Wildcats' 2-1 win over Winder-Barrow on Friday, March 13. Bazan scored the winning goal with 10:31 left in the match.

Winder-Barrow's Efrain Alvarado controls the ball during the first half against Apalachee.

Apalachee goalkeeper Ronal Galindo comes up with a save off a Winder-Barrow corner kick.

Apalachee's Emerson Rivas works against Winder-Barrow's Will Perry for control of the ball.

Apalachee's Bailey Hope Arnold battles for the ball against Winder-Barrow's Vanessa Vazquez during the Lady Wildcats' 4-0 win on Friday, March 13.

Apalachee's Skylar Gordon works the ball up the field against Winder-Barrow.

Apalachee's Erin Allen looks to turn the ball up while being defended during the Lady Wildcats' match against Winder-Barrow.

Winder-Barrow defender Rachel Howard looks to clear the ball out with Apalachee's Emily Hale in pursuit.

A solid crowd turned out Friday, March 13, at R. Harold Harrison Stadium to watch the Apalachee and Winder-Barrow soccer teams battle in what were the last high school sports contests in Barrow County for at least the next four weeks as the ongoing coronavirus pandemic continues its spread across the U.S. and Georgia.

On the surface, not much seemed different about Friday’s matches. After the Lady Wildcats toppled the Lady Bulldoggs 4-0, the Apalachee and Winder-Barrow boys engaged in yet another intense, down-to-the wire battle as the Wildcats prevailed 2-1 on the strength of a Jorge Bazan goal in the 70th minute, moving into first place in the GHSA Region 8-AAAAAA standings.

But with public health uncertainties abound, there were whispers around the stadium and on the benches before the matches kicked off: Would this be it for the 2020 season?

If by some chance Friday was the final outing for the Apalachee and Winder-Barrow boys this spring, the teams, which were battling for the top spot in the region at the midway point of the schedule, gave fans an effort that seemed well worth the price of admission. A pair of Apalachee seniors teamed up for the winning goal as Nestor Perla broke away down the right side and crossed the ball over to teammate Jorge Bazan, who knocked it past Bulldogg goalkeeper Caylan Barron with 10:31 remaining for the eventual match-winner.

“I’m very proud of the guys,” Apalachee coach Chad Hooper said after the win. “We knew it was going to be tough coming in, and Winder’s had a really good season. They have skill all over the field and it was difficult. I had to move players around on the field more in this game than I have the whole season so far, just trying to play chess against Winder. They made it difficult for us.”

After surviving a strong and aggressive counter-attack by Winder-Barrow throughout most of the first half, the Wildcats (7-5-1, 4-1 region) struck first on a goal by freshman Jared Romero with 1:04 left before the halftime buzzer.

The Bulldoggs (7-4, 3-2) tied the match with 25:40 remaining when a long free kick from about 50 yards out by Osvaldo Juarez tipped off the hands of Apalachee senior keeper Ronal Galindo and into the net. But Galindo atoned for the mistake, coming up with several big stops down the stretch, including a spectacular outstretched save off a line-drive kick with just over two minutes left to preserve the victory.

“Sometimes a mistake like the one he had affects keepers to where they can’t get back in the game, but he was right back in it,” Hooper said of Galindo. “He knew what he did wrong, and he fixed it and came up really big for us.

“This was a big deal for our guys to play against their friends because a lot of them play club soccer together and Winder is always a rival. No matter how high or low either one of us are, we both seem to play up to this different level when we play each other. I have the utmost respect for their coaches. They have a good team and I see them going deep into the playoffs.”

For Karas and the Bulldoggs, it was a frustrating loss because of how close they were on multiple shots, including attempts off corner kicks that missed wide and a few strikes that banged off the crossbar.

“I’m really proud of how hard the boys fought and also the style of soccer we were playing,” Karas said. “But I think the difference was we created lots of chances and couldn’t put them away; they created a few and managed to find the net. I thought we kept the ball in their defensive half of the field a lot; it just wasn’t our night to find the back of the net.”

In the girls’ match, Apalachee (6-4-1, 3-2) missed on several opportunities in the first half before finally breaking through in the 33rd minute when Emily Hale scored the first of her two goals on the evening.

The Lady Wildcats, who kept the Lady Bulldoggs (3-7-1, 0-5) on the defensive throughout the match, broke it open in the second half, starting with a goal by Victoria Johnson with 36:04 remaining. Hale added her second goal with 12:36 left and Hayley McAllister finished off the scoring a few minutes later.

It was the 10th straight win for the Lady Wildcats over their rivals dating back to 2014.

“We know they’ll always play us tough and that it’ll be a struggle,” Apalachee co-head coach Paul Thornton said. “But I would say our girls really started to jell and this was our team’s most complete performance of the season.”

But still the question lingered: would it be the last?

The teams are now on a hiatus that will last at least four weeks following the Barrow County School System’s closure of schools and cancellation of all extra-curricular activities until at least April 13, when classes were scheduled to resume following spring break April 6-10.

The GHSA has recommended that school systems suspend spring sports activities until further notice in an effort to combat the spread of the virus and the disease it causes, COVID-19.

While no organized team practices can be conducted, the coaches said they hope their players will get rest but also continue to stay in shape, with Hooper saying he would be giving his team a fitness program to work on, on their own.

If this was the end of the season, it would likely be a bitter pill for the teams to swallow. The Lady Wildcats have 13 seniors on their roster. And Thornton, who was a long-time assistant with the program under Scott Bates before he took over with Omeed Behzadi last year following Bates’ departure for Oconee County, is in his final year with the team, having been tapped to start the girls’ soccer program at the new Barrow Arts and Sciences Academy (scheduled to open in August).

“This is new for everybody and we’re not actually sure what to tell them,” Thornton said, referring to the virus situation and the up-in-the-air status of the spring sports season. “We’ll just take it day by day and go with the information we get from the county.”

As for Karas and the WBHS boys, a monkey wrench has been thrown into the middle of what has been a promising season. The Bulldoggs are on pace to have one of the best years in program history and are on track to snap a three-year postseason drought.

“If we get the go-ahead to come back out, I’m excited,” Karas said. “The way we’re playing, if we get to play the rest of the season, I think we’re going to do good things.

“It’s unfortunate that, when everything seems to be falling into place for us, we have this bizarre thing happen. But at the end of the day, the bigger picture is you’ve got to do what’s right for the community and for health.

“As much as I want to keep playing soccer, I don’t want to put people at risk.”