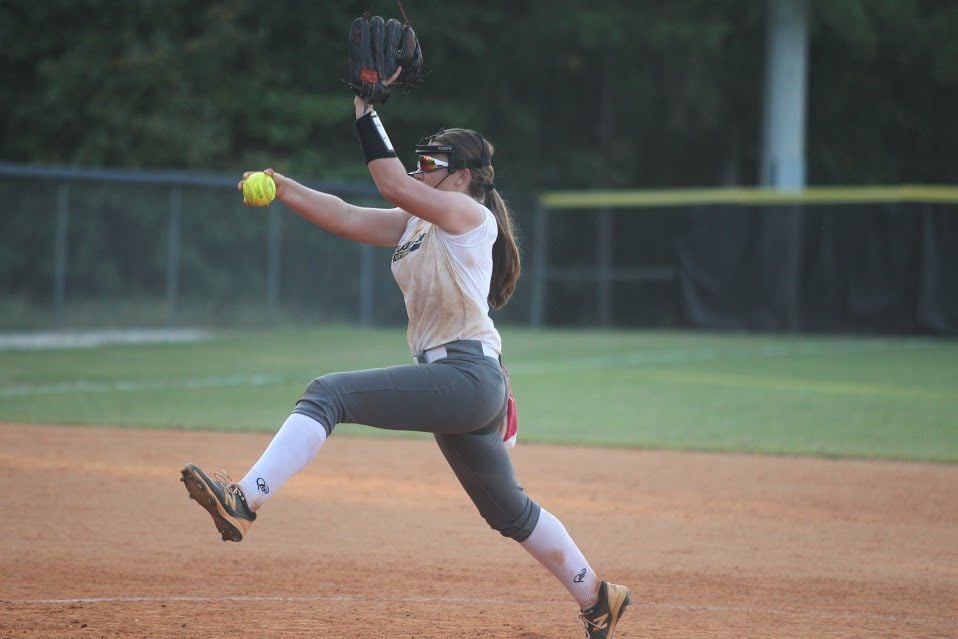 Apalachee sophomore Katelyn Flanders, seen here during a game at Jackson County earlier this season, pitched a complete game and allowed just one earned run on four hits with a pair of walks and eight strikeouts Monday, Sept. 21, as the Wildcats defeated Eastside 7-2 in the second game of a home doubleheader to earn a split. 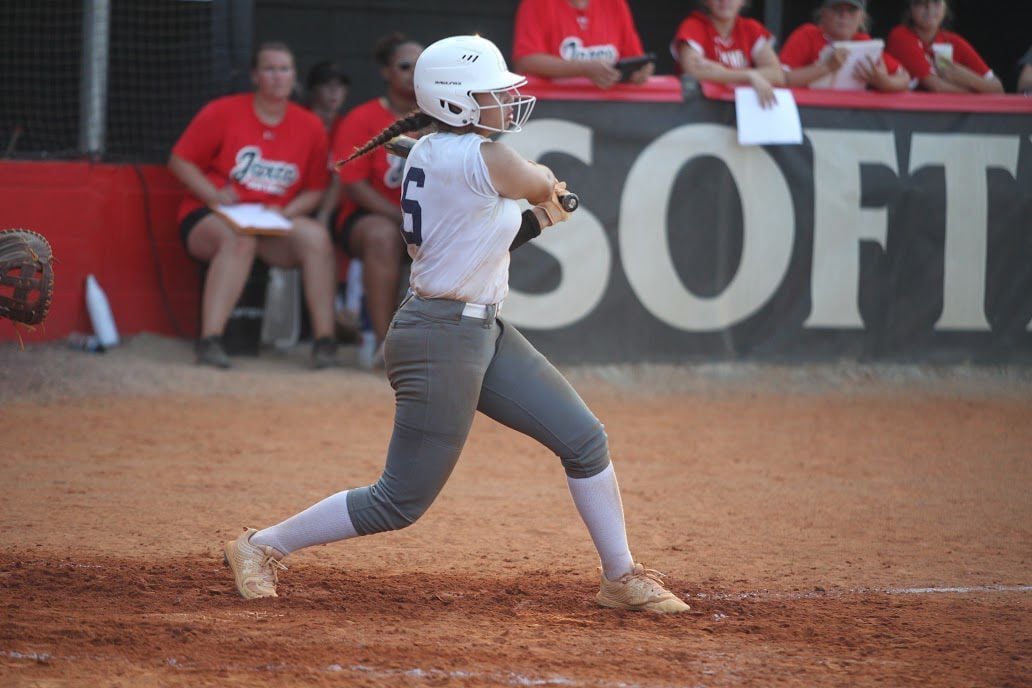 Apalachee sophomore shortstop Tiyara Wingfield has among the Wildcats up and down the lineup providing strong offensive production this season.

Apalachee sophomore Katelyn Flanders, seen here during a game at Jackson County earlier this season, pitched a complete game and allowed just one earned run on four hits with a pair of walks and eight strikeouts Monday, Sept. 21, as the Wildcats defeated Eastside 7-2 in the second game of a home doubleheader to earn a split.

Apalachee sophomore shortstop Tiyara Wingfield has among the Wildcats up and down the lineup providing strong offensive production this season.

Apalachee softball coach Allan Bailey knew going into the year that his team would face a meat grinder of a GHSA Region 8-AAAAA schedule, and it has proven to be just that so far for the Wildcats.

But Bailey has been pleased with his team’s ability to bounce back from a rough loss, the latest example of which came Monday, Sept. 21. After getting pummeled in the first game of a home region doubleheader against Eastside — 14-3 in five innings — the Wildcats bounced back with a 7-2 victory behind the strong pitching of sophomore Katelyn Flanders and some timely hitting to earn the split and even their region record back up at 4-4.

“It’s that old adage in sports. Anytime you get knocked down, you’ve got the choice to stay down or fight, and the thing I was most proud of (Monday) was how the girls were able to quickly hit the reset button,” said Bailey, whose team is now 14-4 overall.

Apalachee roared out of the gate to a 10-0 start this year, which saw the Wildcats rise to the top spot in the state rankings for Class 5A. After a loss to Loganville and a doubleheader sweep at the hands of Walnut Grove put them in an 0-3 hole to start region play, the Wildcats rebounded with a win at Greenbrier and sweep at Jackson County, prior to Monday’s contests with Eastside.

“The girls have responded well to the challenges they’ve faced,” Bailey said. “There’s a lot at hand with these region games. Our region is very competitive, and that’s a big part of why we scheduled some tough non-region games early on. Now we’re playing very solid teams every night.”

Eastside (8-7, 4-4) jumped on Apalachee ace Emily Hodnett early Monday in the first game of the doubleheader, taking a 2-0 lead on a two-run home run in the top of the first and then scoring five more in the third to grab a 7-2 advantage. The Eagles added two more in the fourth and five in the fifth to salt away the run rule-shortened victory.

But the second game was a different story. The Wildcats took an early 1-0 lead in the bottom of the first on an RBI single by Hodnett and then tacked on four in the third on another run-scoring single by Hodnett and three-run double by Tiyara Wingfield to seize control. Wingfield, Hodnett, Allyssa Willer and Allona Norrell all had two hits apiece in the win, while Flanders and Destiny Sexton also hit safely.

That offensive production proved to be plenty of support for Flanders, the team’s No. 2 pitcher, who went all seven innings and allowed just one earned run on four hits and two walks and struck out eight batters.

“She gave us a huge spark after Emily didn’t have her best stuff and got knocked around a little bit,” Bailey said of Flanders. “It just wasn’t our day in that first game. We had some defensive miscues that were pretty atypical of our team, but Katelyn was outstanding. Just having that different kind of pitcher, more of a finesse pitcher really helps, and she did a great job of keeping their really good hitters off balance. She’s been working hard in practice and she’s anxious to get in there and pitch when her number is called.

“And we had some great performances up and down the order. Depth is always a great thing to have, and we’ve got good team chemistry. We’ve been hitting the ball really well all year, and everybody is stepping up and contributing.”

The Wildcats have 10 region games remaining on their schedule and were tied with Eastside and Greenbrier for third in the seven-team region standings through play on Monday, 3.5 games back of first-place Walnut Grove (8-1 entering a Tuesday game at Jackson County). They’ll have a chance to make up some ground Thursday, Sept. 24, — weather permitting — when they visit second-place Loganville (6-2 entering Tuesday’s game at Greenbrier) for a doubleheader beginning at 4 p.m., with Hodnett getting the ball again for one of the games.

Hodnett, a senior Georgia State commit, had been dominant for much of the season before allowing 10 hits and eight earned runs over five innings in the doubleheader opener Monday.

“The stats maybe weren’t indicative of her whole performance,” Bailey said. “They’ve got several good hitters, they were able to put pressure on us early and it just snowballed. But I fully expect she’s going to bounce back and be her typical self next time out because she’s a phenomenal pitcher.”

If the Loganville doubleheader isn’t washed out by rain that’s in the forecast, Apalachee will then be back in action Tuesday, Sept. 29, when it hosts Walnut Grove. From there, the Wildcats will host Greenbrier in a doubleheader Oct. 1, host Jackson County on Oct. 6, travel to Clarke Central for a doubleheader Oct. 8 and then close out the regular season with a game at Eastside on Oct. 13 and a home game against Clarke Central on Oct. 14. The last two games will be make-ups of games that were previously postponed.

“These next couple of weeks are going to shape up the playoff seeding for our region, and we’ve got a challenging road ahead, starting with those two huge games at Loganville,” said Bailey, whose Wildcats could at least lock up the No. 2 seed in the region with a strong showing over the final 10 games, but would likely need some significant help to catch Walnut Grove. “We know they’re a solid team and we feel like we learned a lot from that (0-3 region start against the Red Devils and Walnut Grove). This whole stretch is going to be a good test of our character, and we know every game matters and we’re going to have to be at our best. We can beat anybody if we play to our potential, but we can also get beat by anybody.

“Greenbrier is a really solid team that isn’t going to go away. Jackson County had a rough start but their No. 1 pitcher had been out and now she’s back, and I imagine they’ll be better down the stretch. And Clarke Central has a good pitcher that is capable of keeping them in any game.

“Nothing is out of the question, and that’s why you play the game. So we’ve got to be at our best.”