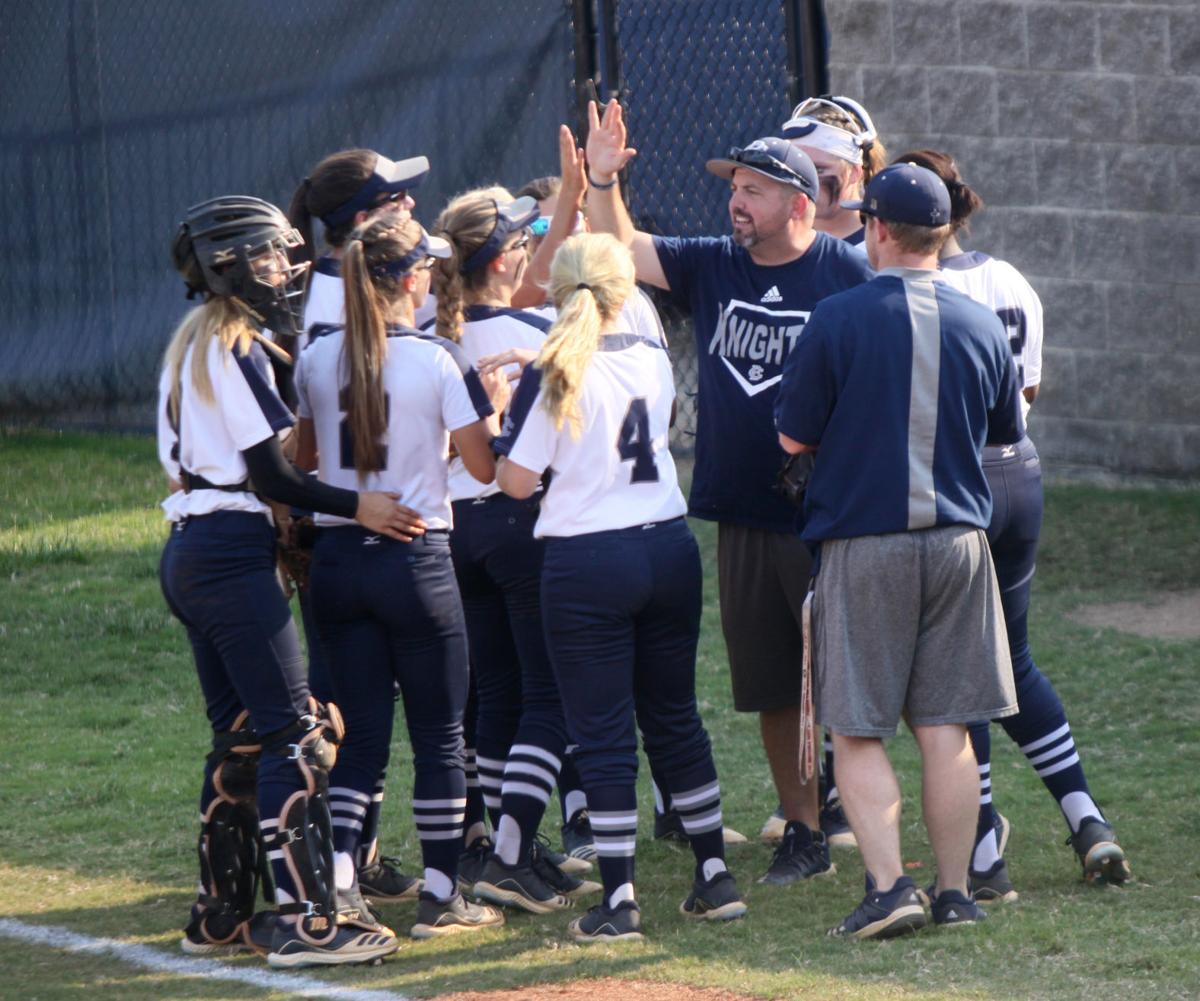 The Bethlehem Christian Academy softball team, seen here between innings during a game against John Milledge Academy on Monday, Sept. 30, will play at The Heritage School in Newnan on Thursday, Oct. 3, for a region championship. 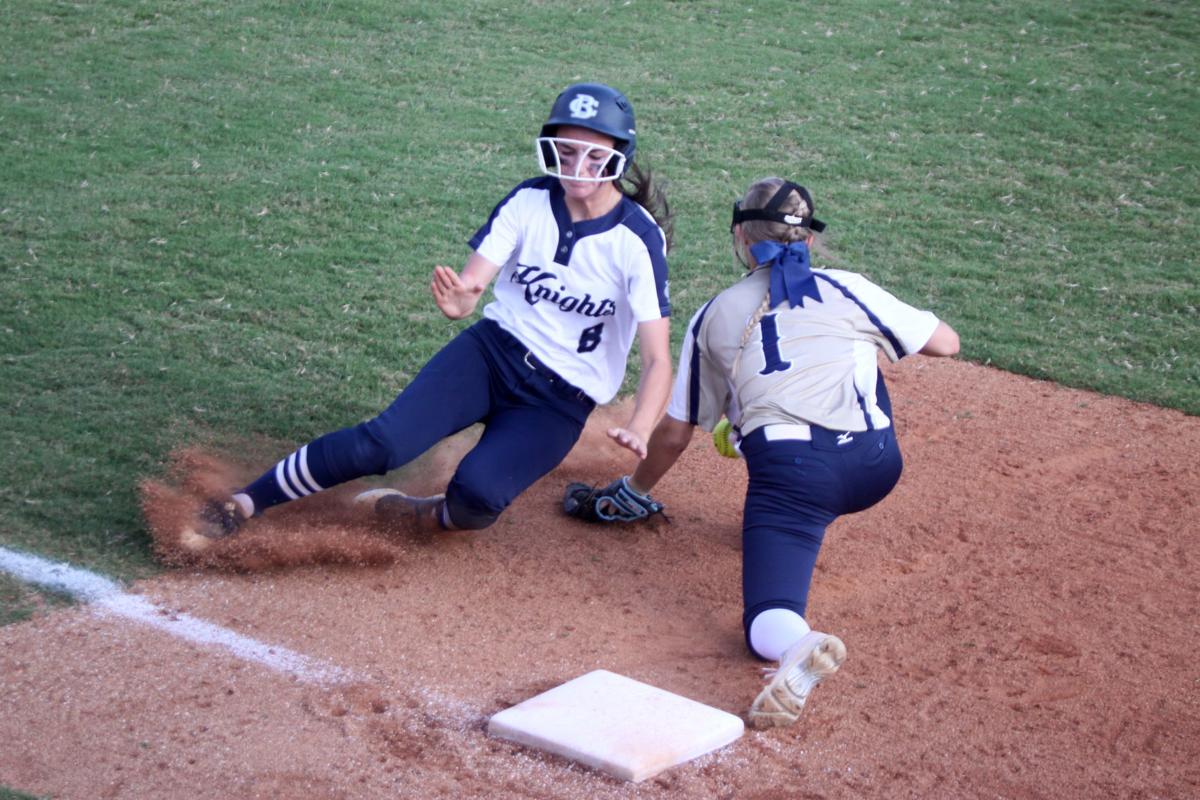 Taylor Buckner, seen here sliding safely into third base against John Milledge, is the only BCA senior this season 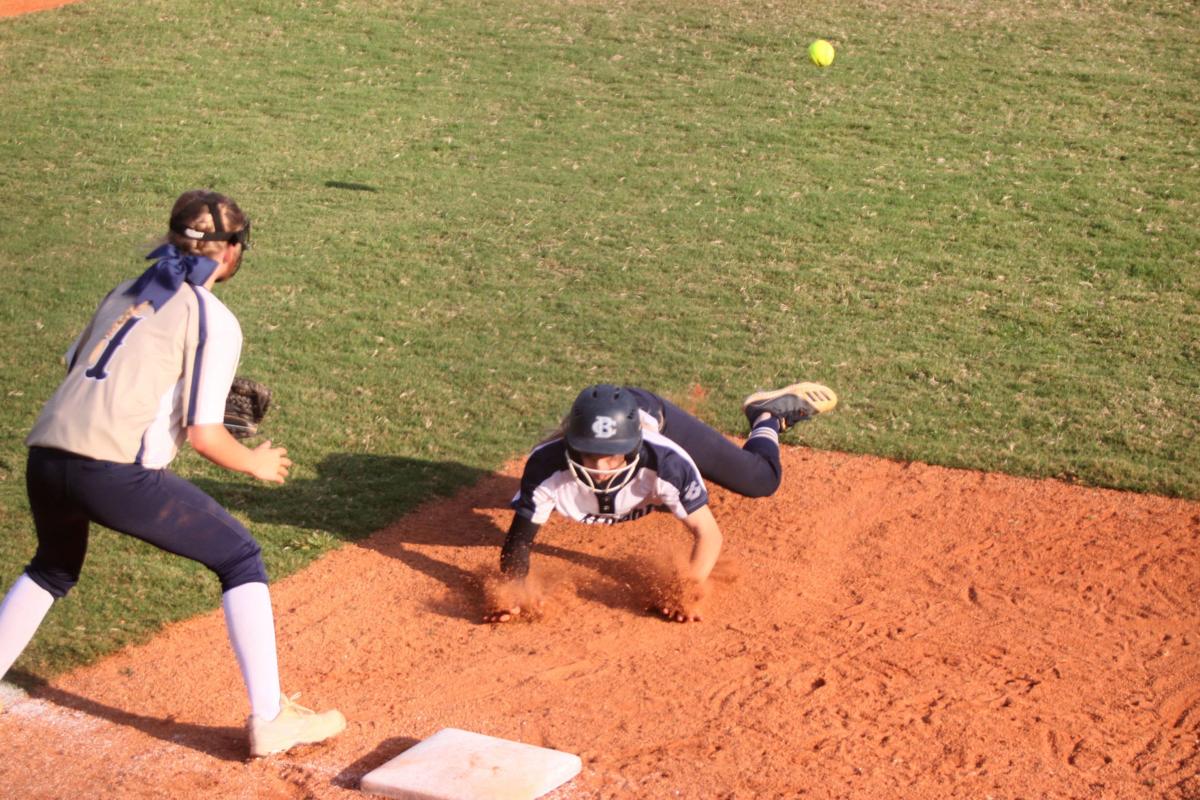 BCA junior catcher Lindzie Owen, seen here sliding safely into third base against John Milledge, is having another monster season at the plate out of the leadoff spot.

The Bethlehem Christian Academy softball team, seen here between innings during a game against John Milledge Academy on Monday, Sept. 30, will play at The Heritage School in Newnan on Thursday, Oct. 3, for a region championship.

Taylor Buckner, seen here sliding safely into third base against John Milledge, is the only BCA senior this season

BCA junior catcher Lindzie Owen, seen here sliding safely into third base against John Milledge, is having another monster season at the plate out of the leadoff spot.

After going 17-0 and winning the GICAA state championship this past spring in its second season back from a four-year hiatus, the Bethlehem Christian Academy softball team moved up to GISA this fall and has had an “up and down” season, as coach Michael Clarke put it.

But the coach is confident about the program’s overall direction, and the Knights will play for a Region 1-AAA championship at 5 p.m. Thursday, Oct. 3, when they visit The Heritage School in Newnan. The Knights, who improved to 6-6 Tuesday, Oct. 1, with a 17-0 victory at Creekside and are 3-1 in region play, and the Hawks (also 3-1 in region play) split their first two meetings this season with BCA winning 8-0 on Sept. 10 and Heritage prevailing 14-6 on Sept. 23, necessitating a one-game playoff for the region championship.

The winner will get a first-round bye in the GISA’s 12-team playoff format, while the loser will host a first-round series beginning Tuesday, Oct. 15.

“This year has been a good learning experience for us, and we’re finally realizing we can play at this level, too,” Clarke said. “It’s just a matter of us developing more consistency. We’ve still got a lot of young players and only one senior on the team. We’ve got a lot of ninth- and 10th-graders playing. We’re really young and still in the process of growing the team.”

That inconsistency reared its ugly head a few times in the Knights’ 15-7 home loss to John Milledge Academy on Monday, Sept. 30 as the Knights walked seven batters, hit one and committed six errors, accounting for eight unearned runs.

After Clancy Bourbeau put the Knights out in front 3-0 with a three-run double in the bottom of the first, the Trojans took advantage of a walk and two BCA errors to score five two-out runs and grab a 5-3 lead in the second. John Milledge extended its lead to 8-3 in the third and never looked back, fending off a couple of rallies by the Knights before finally pulling away for good.

“We just had too many untimely mistakes,” Clarke said. “We’ve got to go back to the drawing board and hopefully eliminate those errors and walks. If we can do that, I think we’ve got a good chance of competing (for a championship).”

After Monday’s game, the Knights honored their lone senior, center fielder Taylor Buckner, who had a solid day out of the No. 2 spot in the lineup, going 1-for-2 with a pair of walks and two runs scored. Buckner, who plans to continue her playing career at Piedmont College, has been solid all season, hitting .500 with a .594 on-base percentage, 13 RBIs and 10 stolen bases. She and junior catcher Lindzie Owen (.515 average, .529 OBP, two homers, four triples, 10 RBIs and eight steals) have formed a potent 1-2 punch in the batting order.

“They definitely set the tone and everybody feeds off of them,” Clarke said. “I wouldn’t want anybody else hitting 1-2 for me. Taylor’s an amazing leader. She does everything we ask her to do, on and off the field. She keeps the girls in line and keeps them humble. We’re going to miss her tremendously next year.”

After Thursday’s game, BCA will be off next week before beginning the postseason. Clarke said the Knights will log a couple of practices but will be out of town most of the week for a schoolwide spiritual retreat during BCA’s fall break.

The time off could wind up being a welcome reprieve for a team that went almost straight from its spring season to its fall campaign with only a couple weeks off.

“These girls have been playing ball pretty much all year, and to some of them this feels like their job,” Clarke said. “We haven’t had a real offseason with strength and conditioning. It’s been more like nine months straight of in-season conditioning. So I think it will be a good break for us to regroup, reassess and see where we’re going.”