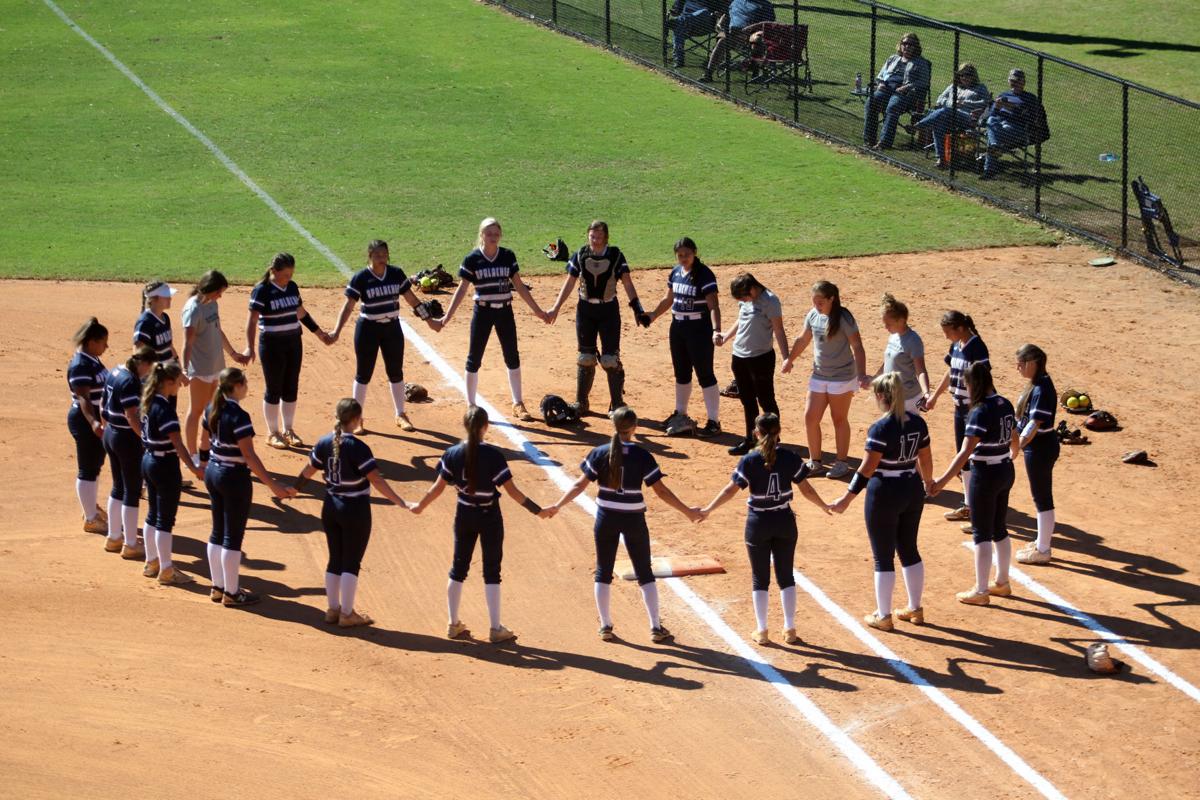 The Apalachee softball team gets ready for its GHSA Class 5A Final Four tournament opener Friday, Oct. 30, against Whitewater. The Wildcats fell 3-2 and then lost 1-0 to Starr's Mill on Friday night as their school record-setting season came to an end at 28-8. 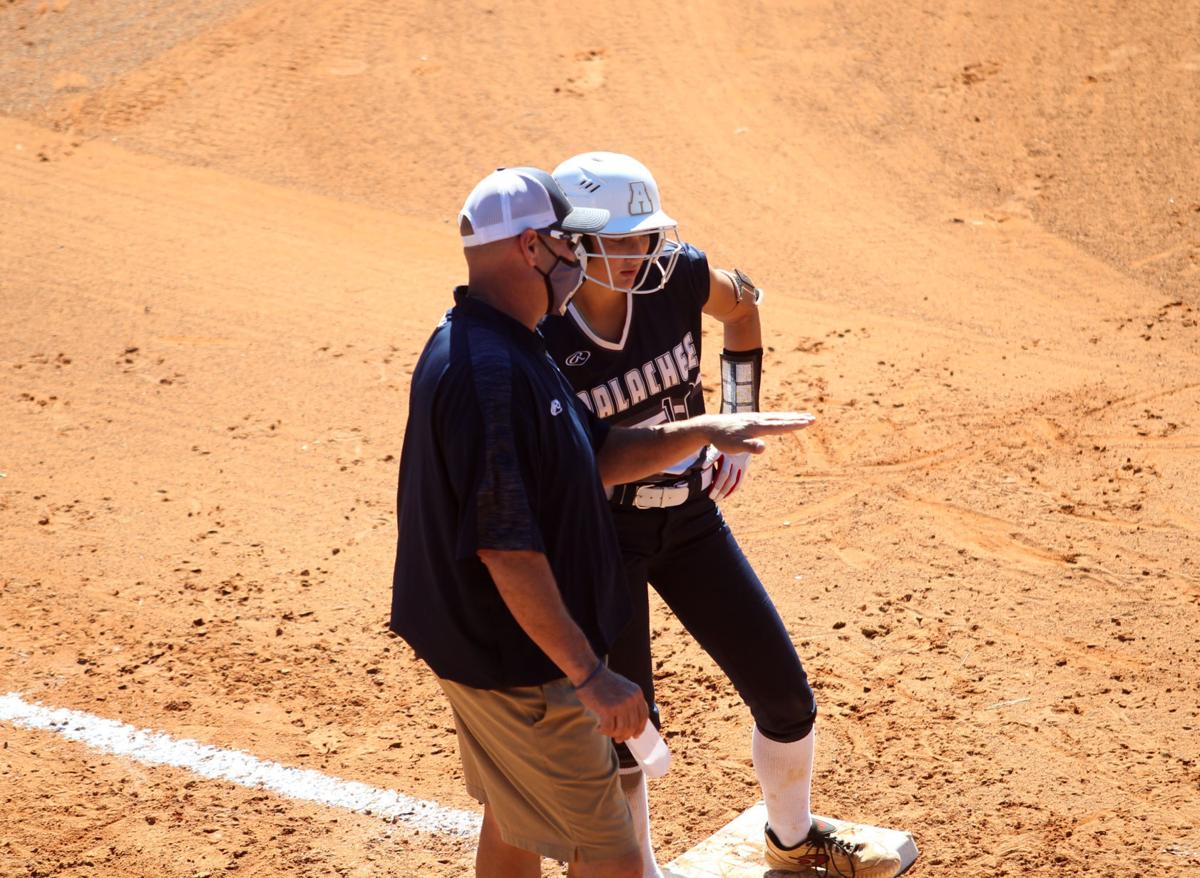 Apalachee assistant coach Vance Medlam talks with freshman Allyssa Willer on the base paths during the Wildcats' Final Four tournament game against Whitewater on Friday, Oct. 30. 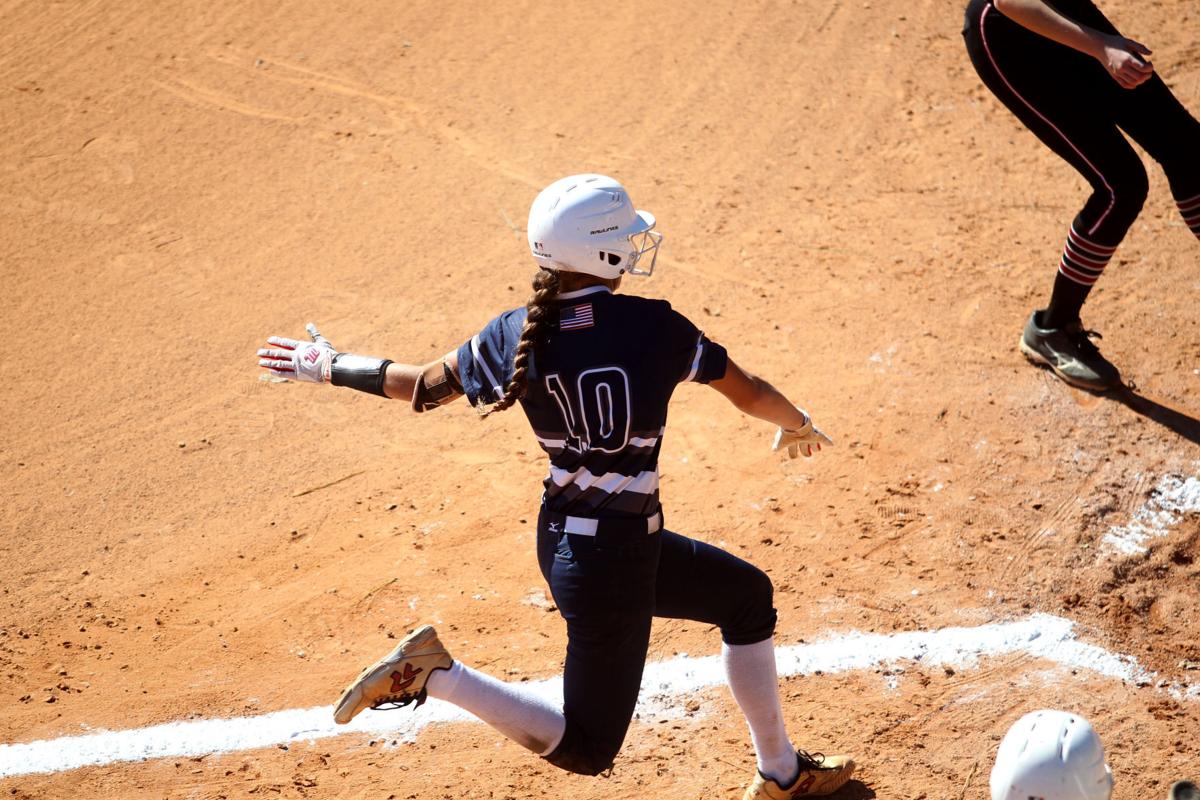 Apalachee's Allyssa Willer scores on a wild pitch in the first inning of Friday's game against Whitewater. 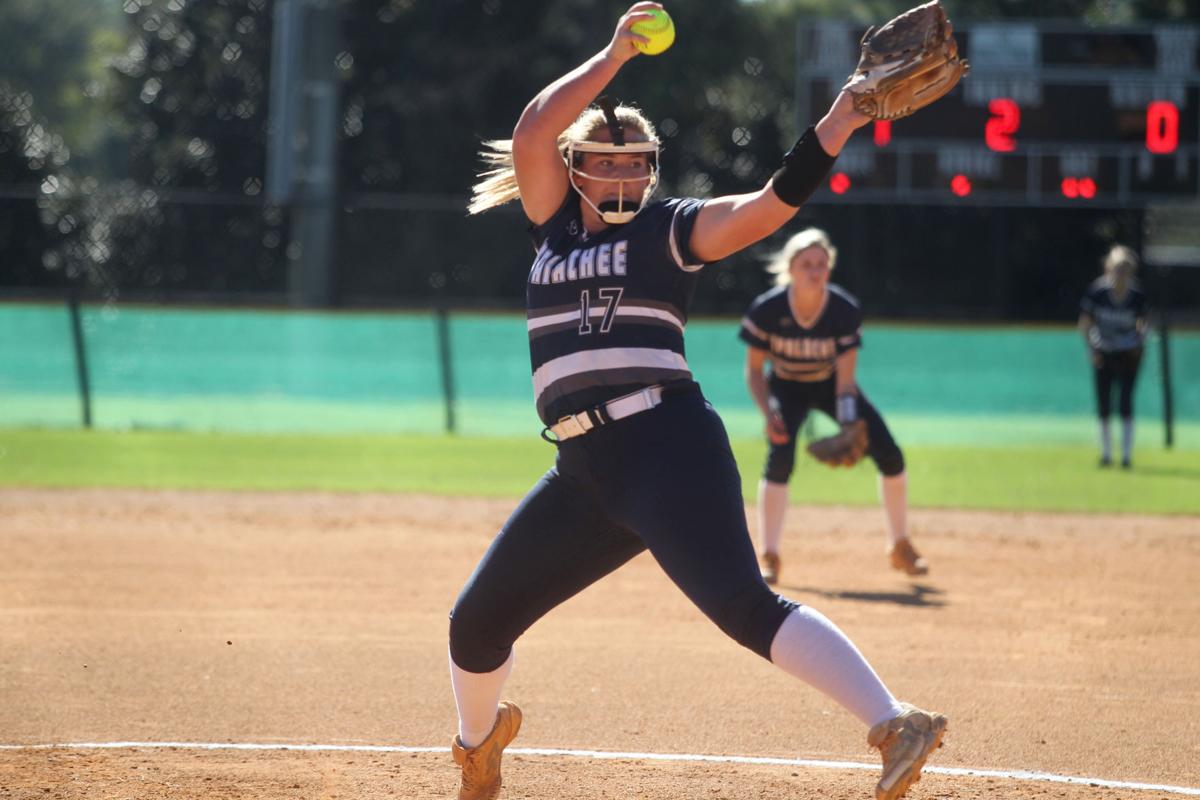 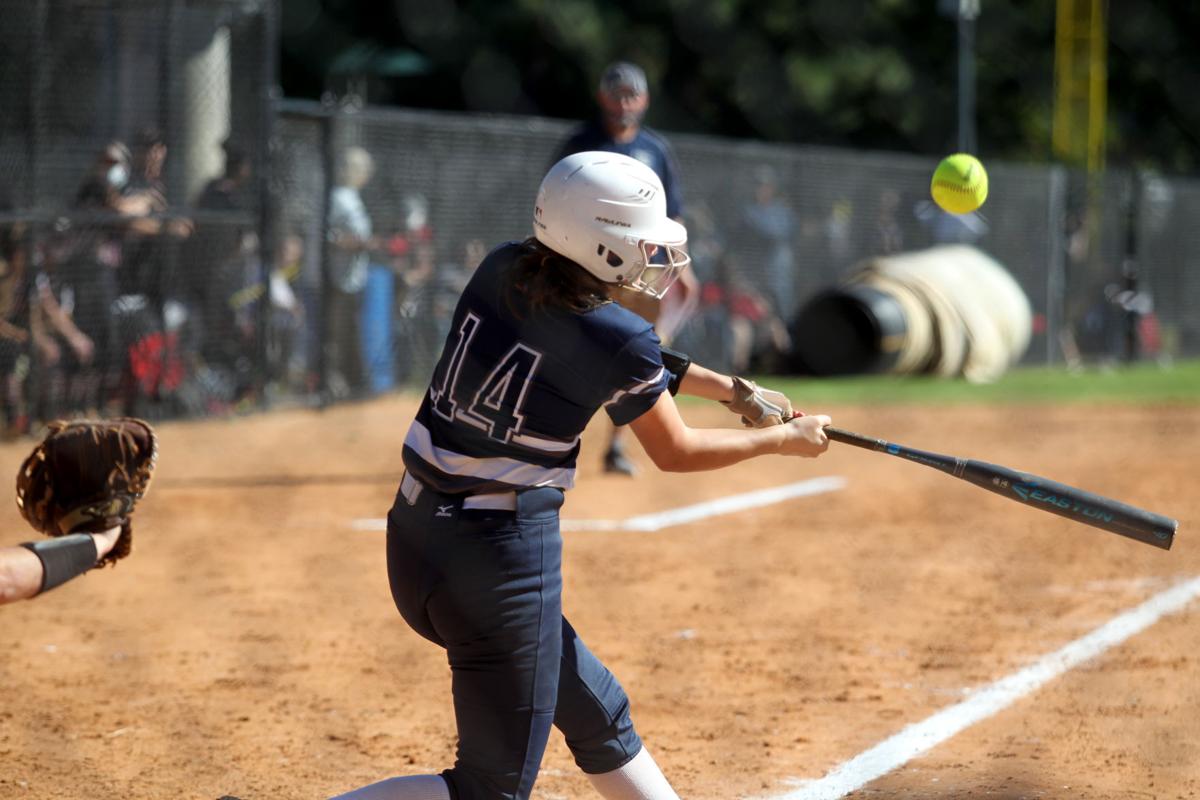 Apalachee's Sam Woody connects with a pitch during the Wildcats' Final Four game Friday against Whitewater. 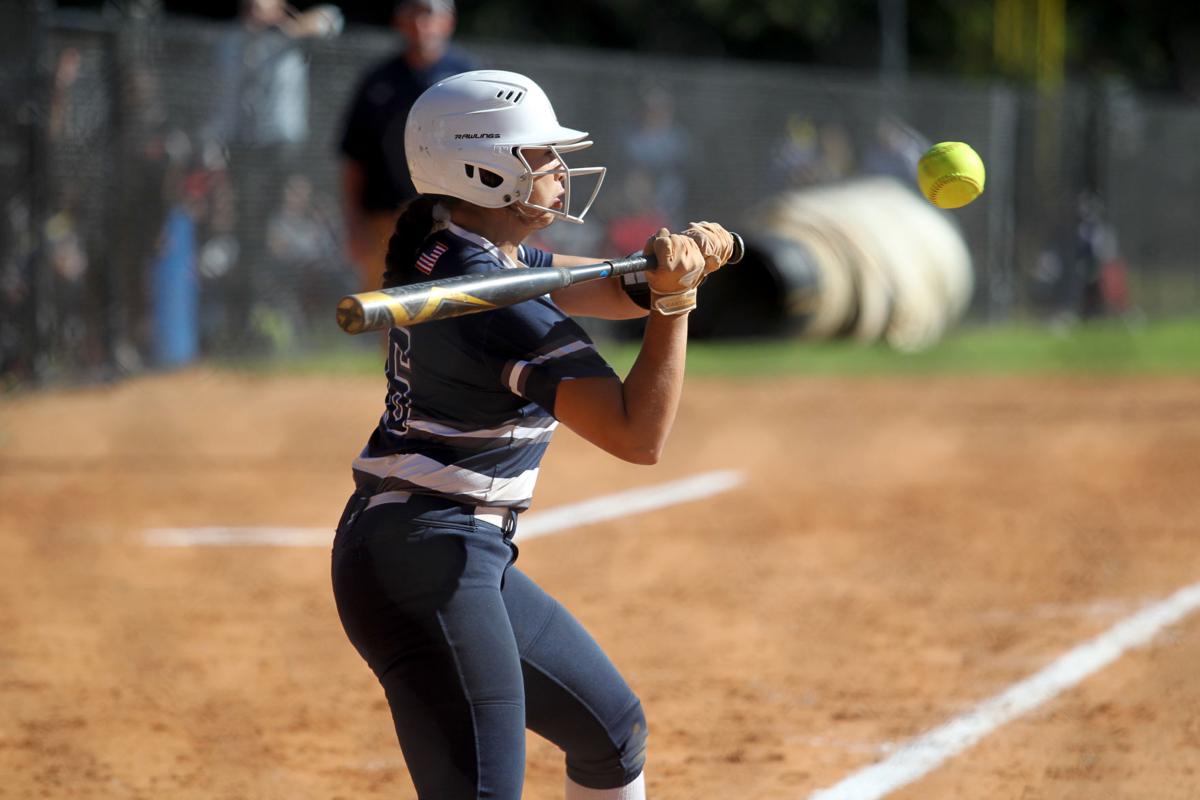 Apalachee's Tiyara Wingfield looks at a pitch during the Wildcats' Final Four game Friday against Whitewater. 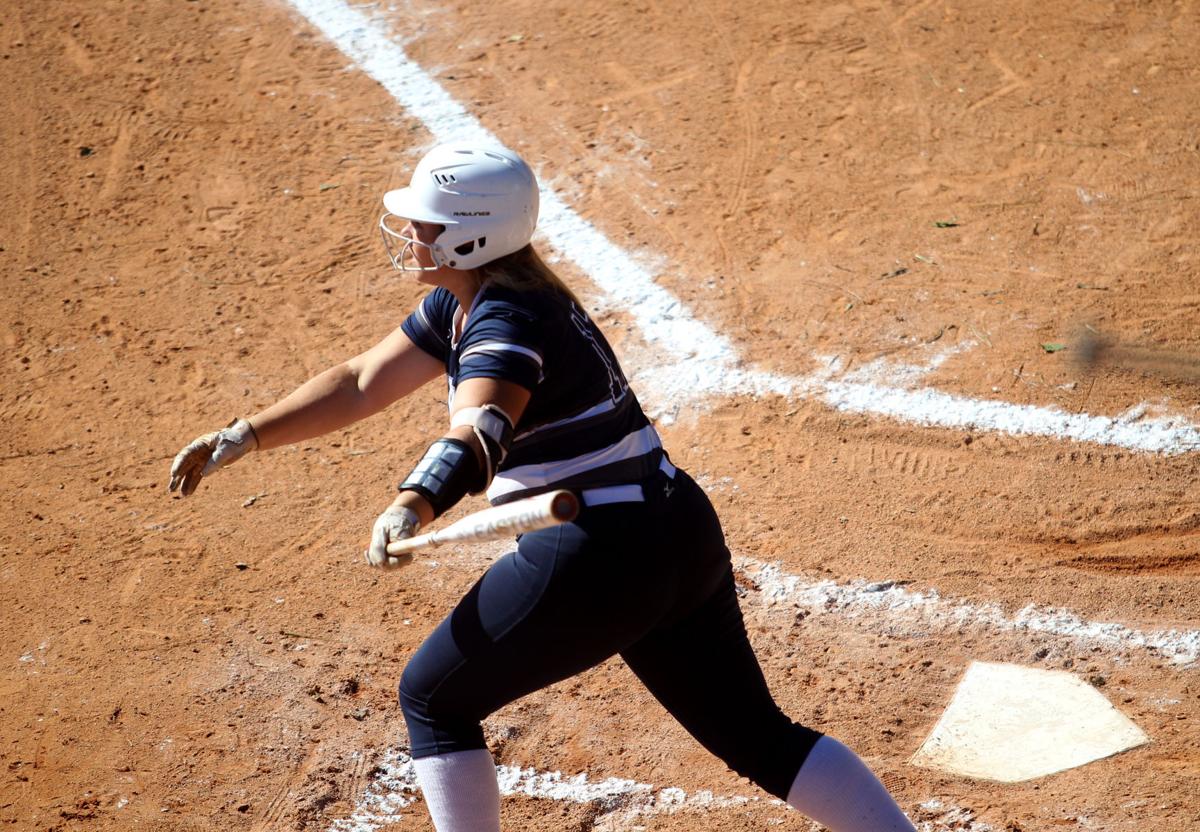 Apalachee's Emily Hodnett hits a single in the bottom of the first inning of Friday's Final Four game against Whitewater. 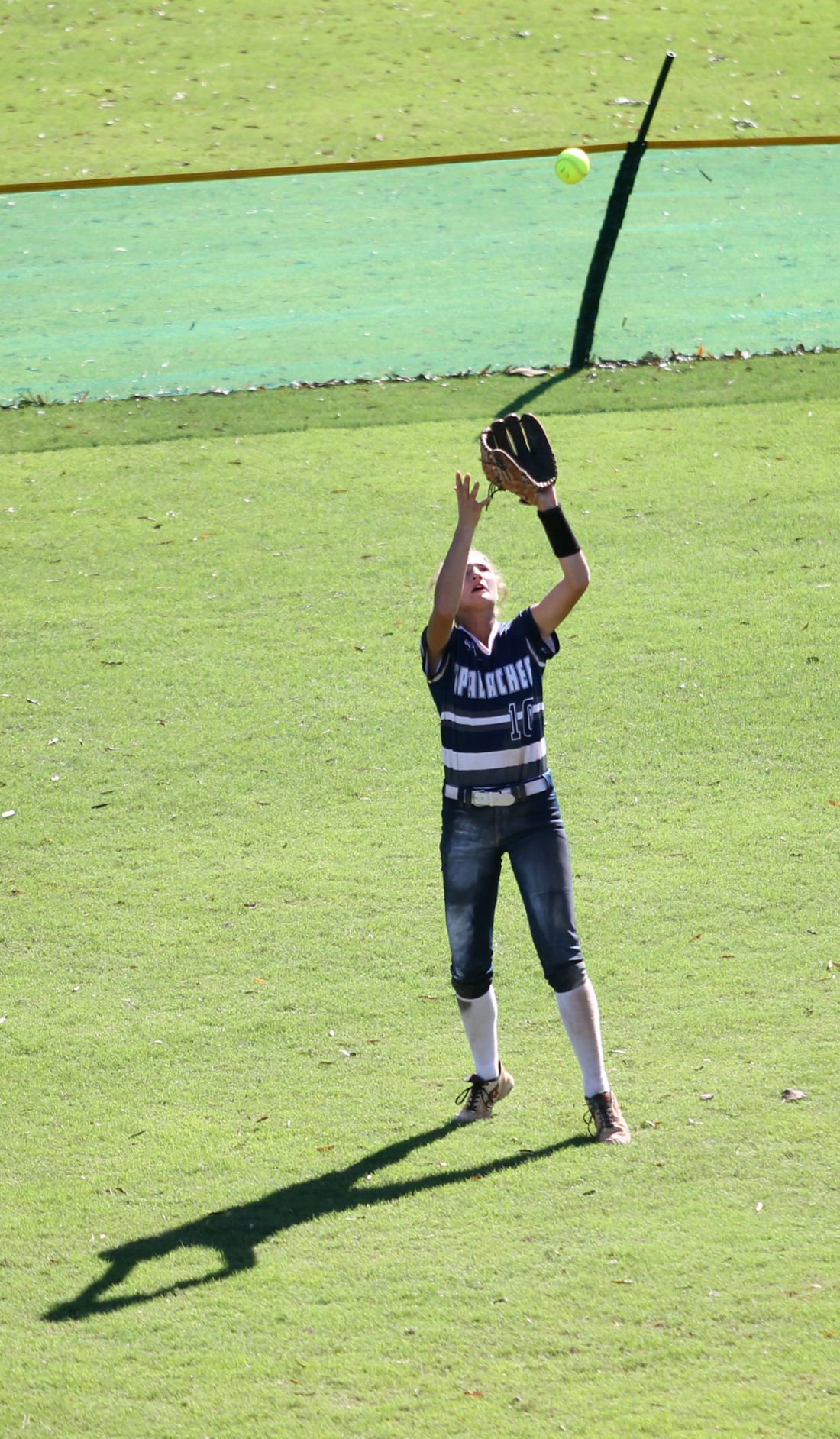 The Apalachee softball team gets ready for its GHSA Class 5A Final Four tournament opener Friday, Oct. 30, against Whitewater. The Wildcats fell 3-2 and then lost 1-0 to Starr's Mill on Friday night as their school record-setting season came to an end at 28-8.

Apalachee assistant coach Vance Medlam talks with freshman Allyssa Willer on the base paths during the Wildcats' Final Four tournament game against Whitewater on Friday, Oct. 30.

Apalachee's Allyssa Willer scores on a wild pitch in the first inning of Friday's game against Whitewater.

Apalachee's Sam Woody connects with a pitch during the Wildcats' Final Four game Friday against Whitewater.

Apalachee's Tiyara Wingfield looks at a pitch during the Wildcats' Final Four game Friday against Whitewater.

Apalachee's Emily Hodnett hits a single in the bottom of the first inning of Friday's Final Four game against Whitewater.

The Apalachee softball team came to the GHSA Class 5A Final Four tournament in Columbus determined both to make amends for an 0-2 showing in last year’s Class 6A Elite Eight and to capture the program’s first-ever state title.

But those hopes and dreams were dashed Friday, Oct. 30, as the Wildcats — for the second year in a row — dropped a pair of one-run games and saw their record-setting season come to an end at 28-8. First on Friday afternoon, they fell in a 3-2 nail-biter to Whitewater, failing to get a much-needed hit in a couple of key situations. Then, in an elimination game a couple hours later, they were completely baffled by Starr’s Mill junior left-hander Lilli Backes, who threw a no-hitter with 17 strikeouts and was aided by a Sarah Latham solo homer in a 1-0 victory.

Starr’s Mill defeated Whitewater early Saturday afternoon in another elimination game before falling to Jones County for the championship.

Despite the disappointing end to the year, second-year Apalachee head coach Allan Bailey said his team had no regrets about what was a historical year for the program. After Bailey, also the school’s head baseball coach, saw a promising spring campaign end abruptly due to the coronavirus pandemic, there was lingering doubt for months whether a fall sports season could be played and completed and whether his highly-touted softball team would have a chance to make another run at a title.

“It’s been a difficult year and we’ve had to make a lot of adjustments, but it was a great season for the girls,” Bailey said. “Obviously, right after that last game, the emotion hits and those are always the worst conversations you have to address, especially with seniors who have just played their last game and come up short. But after that initial wave, there was really a sense of team pride. We had a team meeting Friday night and ate pizza at the hotel and just had a fun time talking about all the memories we had of the year. You could just tell they were happy with what they had accomplished. Us going to the Final Four for the first time is something they’ll never forget, and anytime you get this far, you’ve got a special team.

Backes, who is regarded as one of the top pitchers in the state and is being heavily recruited, overwhelmed the Apalachee offense in the nightcap Friday and allowed just one baserunner in a brisk game — a dropped third strike on a passed ball that Emily Hodnett reached on in the top of the first. The southpaw’s performance overshadowed what was an almost equally impressive effort from Hodnett, who threw all 13 defensive innings for the Wildcats on Friday and was on the tough-luck end of both losses. The senior Georgia State commit struck out the first seven Starr’s Mill hitters she faced and allowed just three hits and two walks while fanning 11. But her one mistake on the night proved to be a costly one as Latham, the No. 9 hitter leading off the bottom of the sixth turned around a Hodnett offering and deposited it over the left-field fence to give the Panthers a 1-0 win. Backes quickly struck out the side in the top of the seventh to complete the no-hitter.

The Wildcats also faced a pair of tough pitchers in the tournament opener against Whitewater, but got off to a promising start when Allyssa Willer led off with a single, moved to second on a sacrifice bunt and eventually came around to score on a wild pitch.

Lily Griffith’s two-run homer in the top of the fourth put Whitewater ahead 2-1 before Apalachee tied it in the bottom of the frame on a one-out RBI single by Sam Woody. But the Wildcats couldn’t add on and then missed another golden opportunity in the fifth with runners on first and second and one out after a leadoff single by Makayla Tatum and a one-out walk by Katelyn Flanders, as Whitewater pitcher Makayla Coffield got Hodnett to ground out and then struck out Morgan Reynolds to end the threat.

Coffield then hit a one-out RBI double in the sixth to put Whitewater back in front and pitched two more scoreless frames from there to earn the win. Tiyara Wingfield worked a walk to lead off the bottom of the seventh and give the Wildcats a chance, but she was doubled off first when Tatum popped up a sacrifice-bunt attempt, and Coffield struck out Willer to end it.

Hodnett went the distance in the circle for Apalachee, allowing three runs, six hits and two walks in seven innings while striking out 13.

“The difference between our last two runs to Columbus was last year we made some costly mistakes, two big errors in each game, and this year that wasn’t the case,” Bailey said. “You had Whitewater’s best hitter hitting the homer that made the difference, and then you go up against the pitcher like Starr’s Mill had, and sometimes all you can do is tip your cap. It was their best and our best, and they got the key hit when they needed it and we unfortunately were not able to.

“There’s the age-old saying that you just got to put the ball in play, and I say it as a coach. But when I sit there watch what our team had to compete against, that’s a hard task to try to accomplish. Our girls never quit fighting, and I couldn’t be prouder of their effort and determination.”

The Wildcats will be losing three key seniors off this year’s team — including third baseman Destiny Sexton, center fielder Kensley Kraus, and, perhaps most indispensable, Hodnett, who has been one of the top pitchers in the area since she was a freshman and elevated her game even further as a senior. Hodnett, a first-team all-region selection in Region 8-AAAAA, finished the year 20-6 with a 1.26 ERA and 0.798 WHIP and struck out 275 batters in 155 1/3 innings of work. She also hit .379 at the plate with a .458 on-base percentage, 1.002 OPS, three homers and 29 RBIs.

But Apalachee, which was sophomore-heavy this year, is also a team poised to return several key players who now have two trips to Columbus under their belt. First baseman/pitcher Katelyn Flanders was a first-team all-region selection, hitting .439 with a .535 OBP, 1.096 OPS, a homer, seven doubles and 17 RBIs. She also went 8-1 in the circle with a 2.16 ERA and 1.04 WHIP. Catcher Sam Woody and shortstop Tiyara Wingfield (both all-region honorable mentions) and second baseman Morgan Reynolds are three more sophomores set to return as three-year starters next fall, while freshman outfielder Allyssa Willer made an immediate impact and earned second-team all-region honors.

“You couldn’t ask for any better leadership out of those three seniors, and at the same time we’ve got a lot of underclassmen who are going to keep getting better. We’ve got a good foundation here,” Bailey said. “We told our girls two weeks ago that, no matter what happened this postseason, we were proud of them, and they were able to go out there an complete this season with class. The way they did it was phenomenal and I couldn’t ask for a better group of players.”