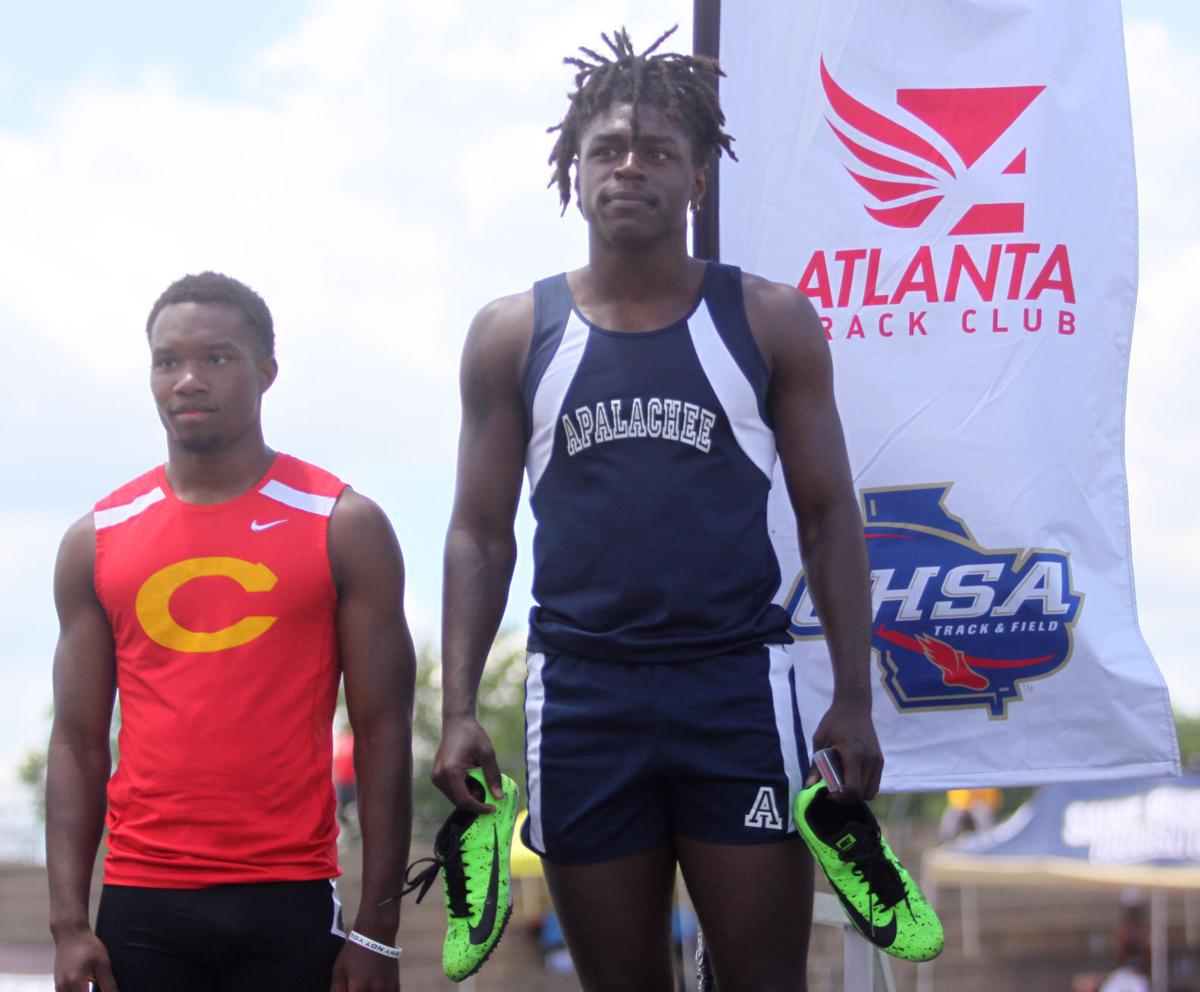 Apalachee senior Tauheed Ferguson stands on the podium after finishing second place in the 100-meter dash Saturday, May 15, during the GHSA Class 5A state championship meet at Carrollton High School. 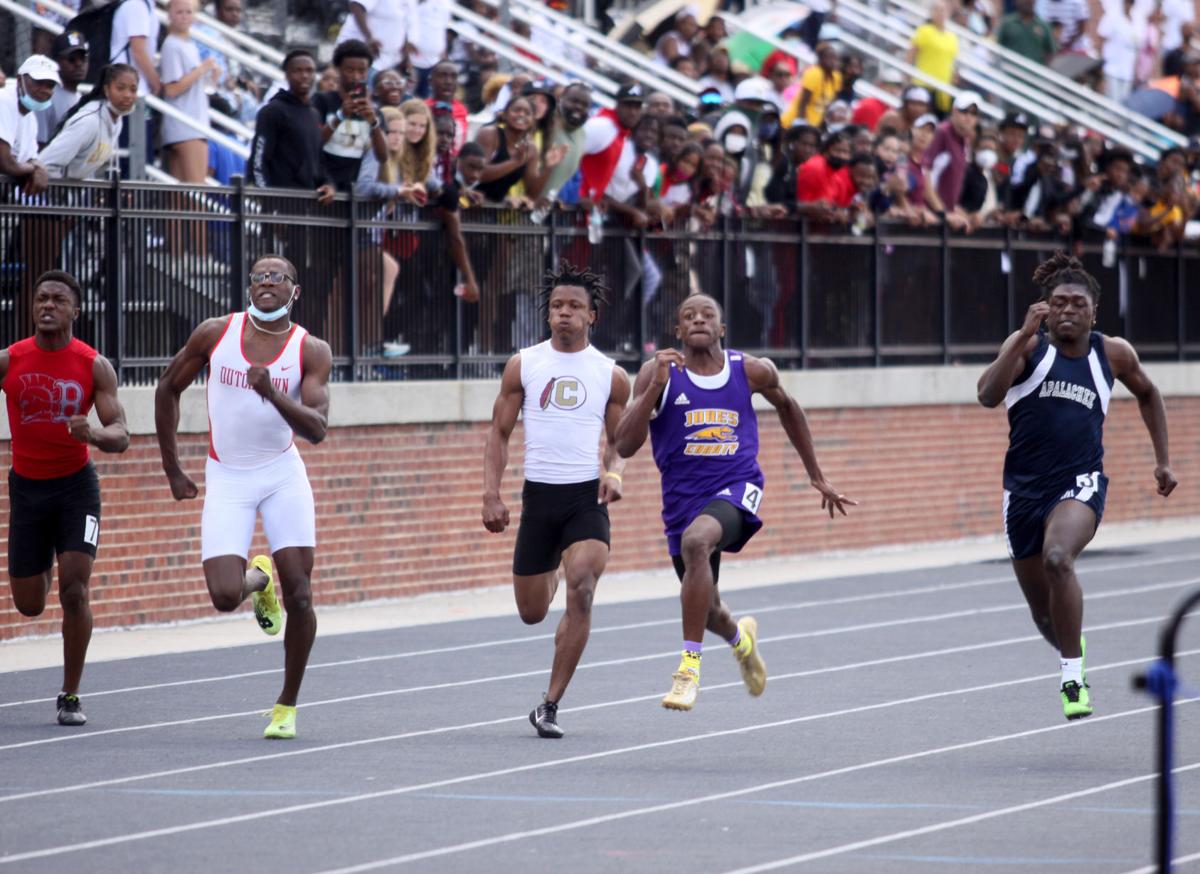 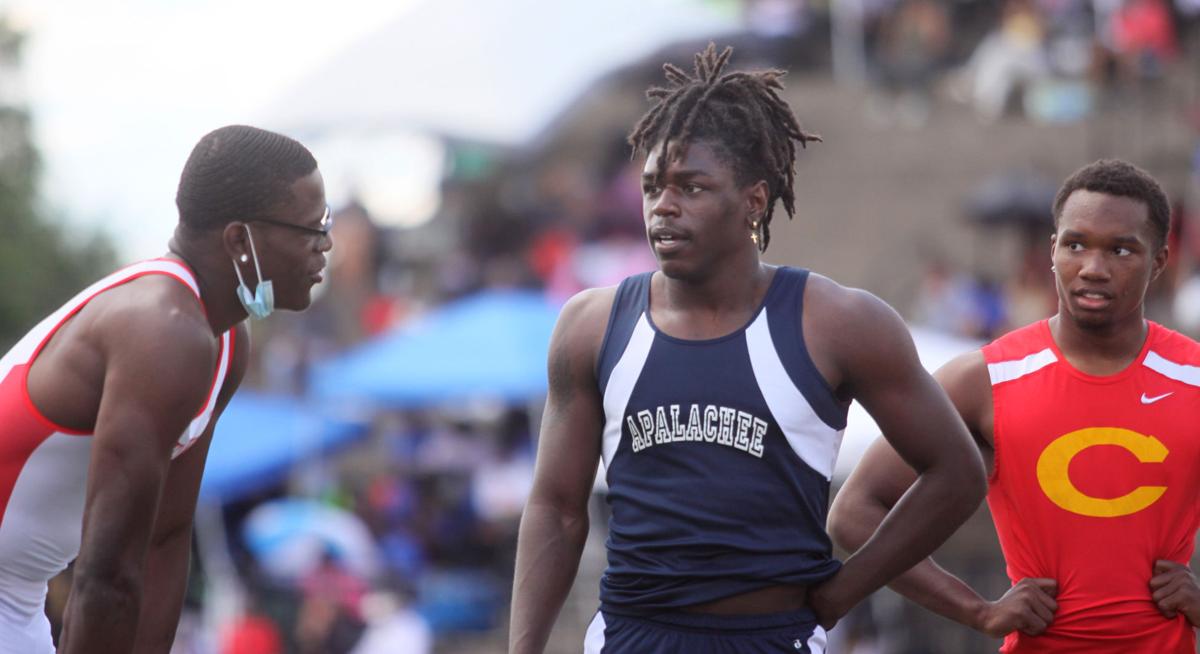 Ferguson talks with fellow competitors after the 100-meter race Saturday. 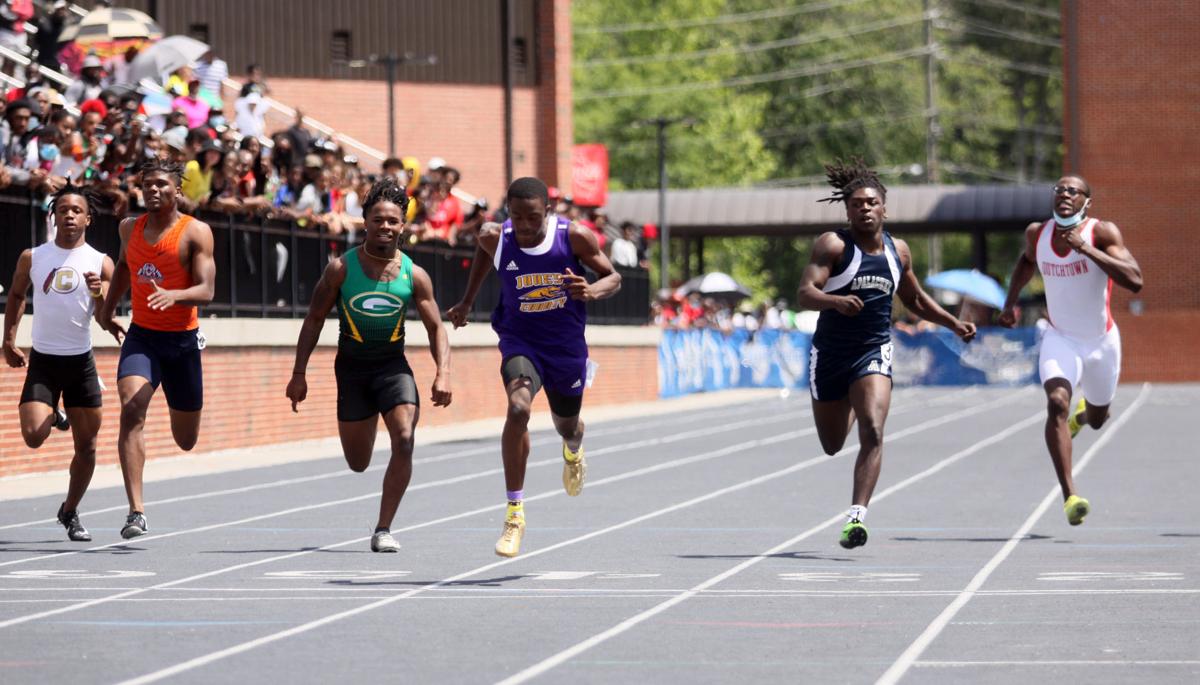 Ferguson heads toward the finish line Saturday afternoon in the 200-meter dash, where he finished second behind Jones County's Zion Ragins.

Apalachee senior Tauheed Ferguson stands on the podium after finishing second place in the 100-meter dash Saturday, May 15, during the GHSA Class 5A state championship meet at Carrollton High School.

Ferguson talks with fellow competitors after the 100-meter race Saturday.

Ferguson heads toward the finish line Saturday afternoon in the 200-meter dash, where he finished second behind Jones County's Zion Ragins.

Coming off the podium Saturday afternoon, May 15, after his second runner-up finish of the day at the GHSA Class 5A state track and field meet at Carrollton High School, Apalachee senior Tauheed Ferguson wasn’t 100-percent thrilled or satisfied. But he also wasn’t lacking in perspective, either, after overcoming daunting physical obstacles to even make it to this point.

Ferguson finished second by an eyelash to Jones County’s Zion Ragins in a thrilling 100-meter dash that saw Ragins cross the finish line in 10.67 seconds with Ferguson a step or less behind at 10.74, which set a personal best and school record for the Wildcats. Ragins then went on to top Ferguson again later Saturday afternoon in the 200-meter dash, a week after topping him in both events at the state sectionals in McDonough.

“If I had to do it over again, I would have gone back and changed some things,” Ferguson said, still catching his breath after his second-place showing in the 200-meter dash. “I would have worked on my start some more and come off the blocks a little bit harder, and the outcome might have been a little bit different. But overall, it was a good race with really good competitors and I’m glad I made it this far.”

And making it “this far” was not a journey that came without its valleys. Ferguson, a two-sport athlete, burst on the scene at Apalachee as a freshman when he qualified for state in the 300-meter hurdles and then made it to the podium his sophomore year with a fourth-place finish in the event. His speed and athleticism made him a natural fit in the Apalachee football team’s backfield as well, but his high school career went sideways on him in the fall of 2019 when he tore his ACL in the Wildcats’ season opener, leading to an intensive rehab process that spanned nine months. Ferguson likely would have been limited for his junior track season last spring, but the season was almost entirely wiped out anyway due to the coronavirus pandemic.

Still, Ferguson entered his senior year with high hopes in both sports, but it all nearly came to an end on a fateful third-quarter play during the football team’s game at Madison County on Sept. 19. Ferguson carried the ball into the end zone from two yards out, only to have the touchdown wiped out by an illegal-formation call, and on the next play he took a hard hit that kept him on the ground in pain. Ferguson had broken his hip and had to be transported to a hospital in an ambulance, ending his football season and throwing his track future into jeopardy.

After several more months of rehab, Ferguson was ready for his senior season on the track, but he noticed that things weren’t the same. He had lost several steps in his sprint times and got down on himself.

“I never thought I was going to make it this far because, to be honest, at the beginning of the season I wanted to quit,” Ferguson said. “I had shot put throwers beating me in sprints and it just wasn’t fun. But it was all the part of the process of getting back here and I’m thankful I made it this far.”

Ferguson did indeed regain his footing and speed, as he won the Region 8-AAAAA title last month in both the 100-meter and 200-meter dashes, shattering the school record in the 200 with a time of 21.6 seconds in the region championship meet at Apalachee.

The only thing standing in the way of a healthier Ferguson’s quest for a state title in both events turned out to be Ragins, the freshman phenom from Jones County, who has already garnered multiple Division I football offers at wide receiver. About two hours after Ragins edged Ferguson in the 100-meter dash, he got off to a quick start and led from start to finish in the 200, pulling away with an eye-popping time of 21.59 seconds. Ferguson remained with the rest of the pack most of the way but finished strong down the stretch to hold off Corey Barnes of Mundy’s Mill and secure second place with a time of 22.07 seconds.

“I was trying to work on coming out a little faster because my finish has always been my strong point,” Ferguson said of the 200-meter race. “I always finish hard but needed to get off faster, but it wasn’t fast enough. It got a little tight at the end, but I still held on and was thankful for that.”

For Apalachee head coach David Seawright, it was a personal thrill seeing Ferguson finish second in both events Saturday and nearly qualify for a third. Ferguson was part of Apalachee’s 4x100-meter relay team along with Prince Tate, Edwin Ellis and Jabari Ponders that made it to the state meet, but finished ninth in the qualifying round Friday, May 14, missing the chance to compete in Saturday’s finals by under a second (42.78 seconds).

“Tauheed had a great day and has worked so hard since getting back out there in February,” said Seawright, who is also the offensive coordinator for the football team and thought back to that rough September night in Madison County. “He was still doing physical therapy one day a week when track season rolled around and was struggling, and at that point he really had two choices — quit or keep working hard. And it wasn’t an easy situation for him, but he persevered through it and had a great season. And above all, he made such a huge impact on our other runners because he pushed them to do their best. He’s such a great teammate to have.”

Because of Ferguson’s performances in the 100-meter and 200-meter in Carrollton, he earned an invitation to the Atlanta Track’s Club’s Wingfoot Night of Champions, set for Saturday, May 22, at Marietta High School, giving him one final chance to compete at the high school level.

From there, after he graduates from Apalachee next week with honors, it will be on to the University of Georgia, where Ferguson is headed on an academic scholarship and will pursue a degree in sports medicine. But he also hopes his days of competing will continue, as he plans to walk on for both the football and track and field teams at UGA.

“It’s my dream school. I’ve dreamed of going there since I was a little kid.” Ferguson said of UGA. “Both my parents went there, my sister goes there now, and we’ve always been a Bulldog family. If I can make it on one or both teams, great. If not, it’s still a good school, academically.”

When asked how he would pitch himself to the football and track coaches, Ferguson cited the work ethic that brought him back from devastating injuries to the podium on a warm spring day in Carrollton.

“I’d tell them I’ve worked hard to get this far, and I’m still in the process of coming back and not at my full potential yet,” he said.

“He’s somebody that is continually getting better and hasn’t reached his maximum potential yet because of those injuries,” Seawright added. “I think all he needs to have success at the next level in Athens is an opportunity.”

In other events at the 5A state meet Thursday, May 13, Apalachee senior Maya Mason finished third in the girls’ high jump, tying a personal record with a jump of 5 feet, 2 inches, and capping a solid career.

Meanwhile, Neely Rogan put the finishing touches on a strong freshman season with a third-place finish in the discus (127 feet, 8 inches) and a 12th-place showing in the shot put (32 feet, 5.5 inches).

Rogan, who won the region title in the discus and had the second-longest throw in the sectionals with a school-record throw of 129 feet, 4 inches, came within just three inches of winning the state title.

“Maya worked really hard and improved throughout the whole season and had a lot of confidence going to state, so it was great to see her finish strong,” Seawright said. “Neely met her goal of getting on the podium, and she’s going to be a great leader for our program. I’m excited about the future of our girls’ team and those younger athletes who are going to lead the way. We didn’t get to do as much conditioning in (November and December) with the contact-tracing stuff, but we’ve got over 40 girls set to return to the roster next year. We had a good season for both the girls, who finished second in the region, and the boys and overcame a lot of adversity.

“And we’re looking forward to another great season next year.”

In the 6A state meet at Carrollton, Winder-Barrow senior Kiona Lindsay capped her high school career with a personal-best throw of 38 feet, 5.5 inches in the shot put, landing her in fifth place. Lindsay also competed in the discus at state, finishing 11th with a throw of 104 feet, 1 inch.

“She did really well, considering the tough year with COVID and her being in virtual school and not able to lift weights during the day,” Winder-Barrow throwers coach Elihue Foskey said of Lindsay. “She came up with her best throw when she needed it there in the shot put.”

Meanwhile, Foskey’s son, sophomore Emorrie Foskey, finished seventh in the boys’ shot put with a throw of 49 feet, 10 inches, and took 12th in the discus (131 feet, 7 inches). The younger Foskey’s shot put throw was the farthest of any sophomore competing in the 6A state meet.

“I think he was a little disappointed, but he threw around 49 feet all year and wound up doing really well,” Elihue Foskey said of his son. “We’re expecting big things from him next year and, with two years left, hope he can have a big finish.”