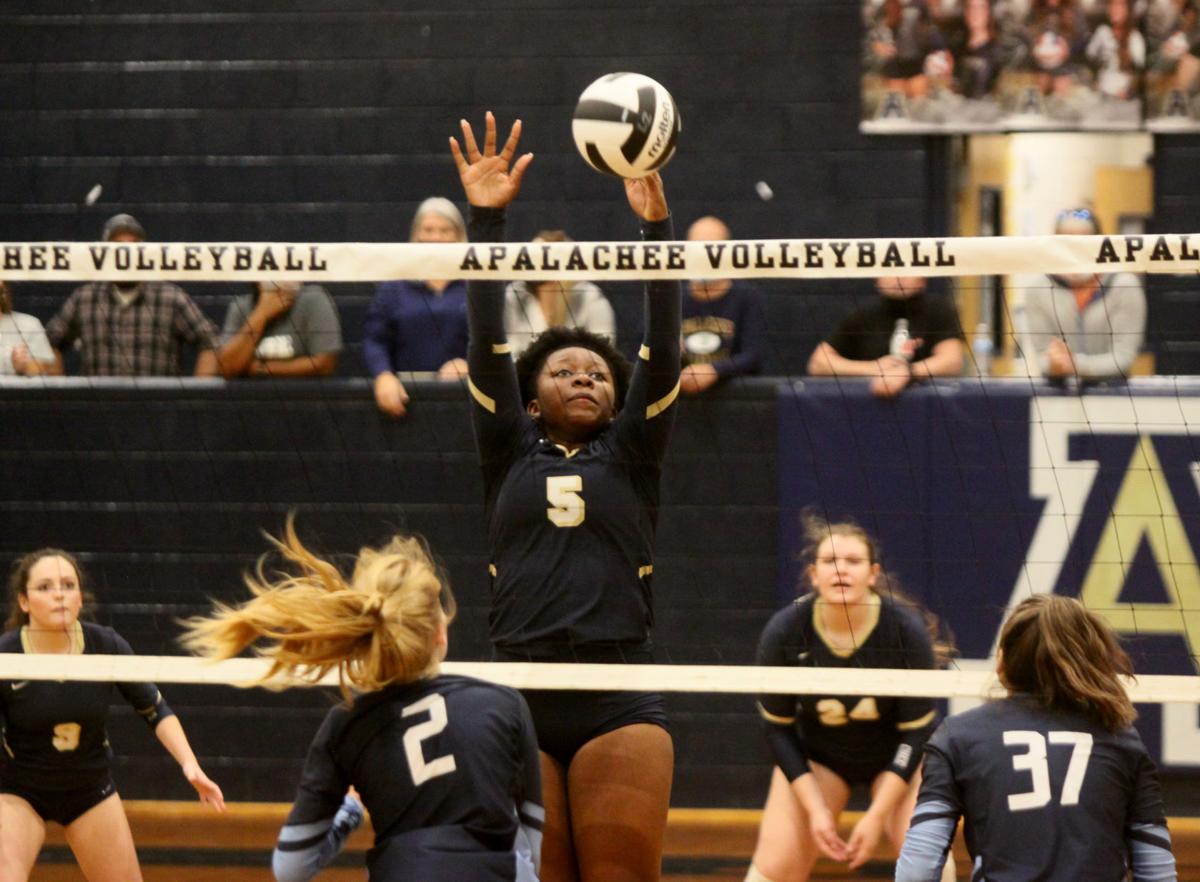 Apalachee's Julianna Agbenou plays defense at the front of the net during the Wildcats' first-round region tournament match Tuesday, Oct. 13, against Johnson-Gainesville. 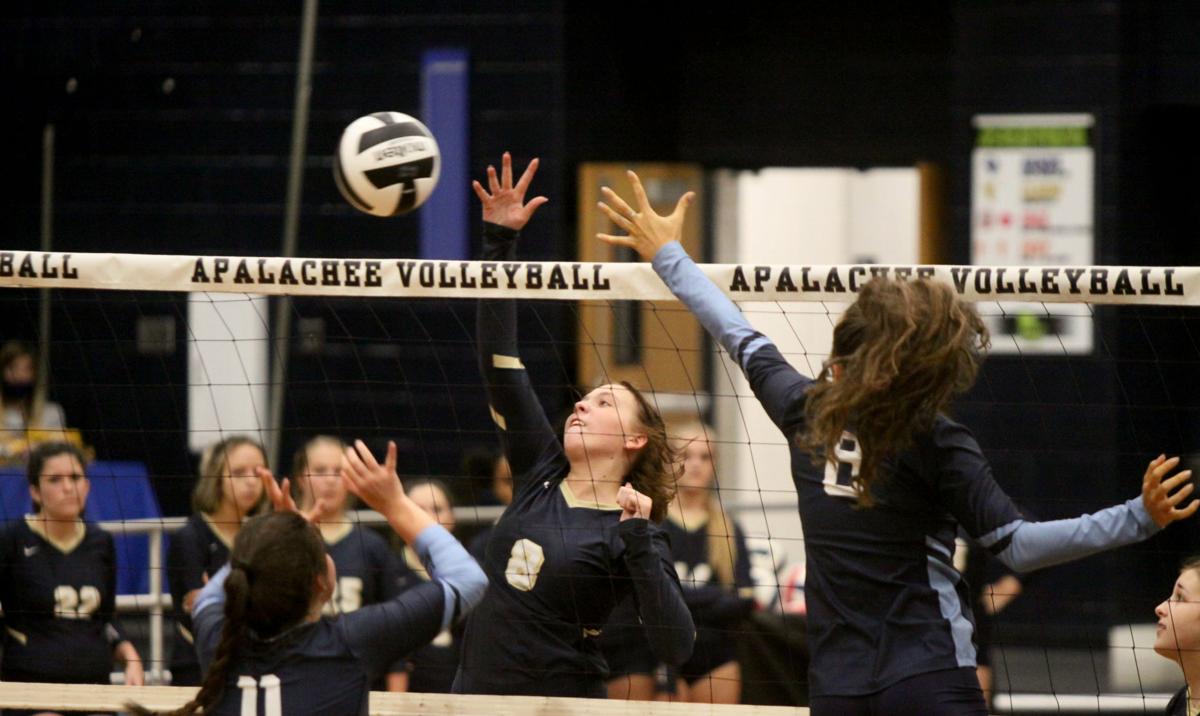 Apalachee's Kassidy Dell goes for a kill Tuesday against Johnson.

Apalachee's Julianna Agbenou plays defense at the front of the net during the Wildcats' first-round region tournament match Tuesday, Oct. 13, against Johnson-Gainesville.

Apalachee's Kassidy Dell goes for a kill Tuesday against Johnson.

The Apalachee volleyball team has clinched another state playoff berth, and while the road wasn’t quite as smooth as the past two seasons when the Wildcats won a combined 97 matches and back-to-back region titles, head coach Joey Alfonso hopes his team has another strong run in them in the coming days as they compete in the final seeding portion of the GHSA Region 8-AAAAA tournament.

The second-seeded Wildcats made quick work of Johnson-Gainesville in the first round of the region tournament at home Tuesday, Oct. 13, shutting out the Knights 3-0 (25-15, 25-11, 25-15) to officially punch their ticket to the state tournament, which is scheduled to begin Tuesday, Oct. 20.

First, they’ll host Jackson County, the No. 3 seed in the region tournament, at 5 p.m. Thursday and then will make the trip to Greenbrier High School on Saturday, Oct. 17, for the final day of the tournament. A win over the Panthers on Thursday would put them in the 3 p.m. region championship match Saturday — most likely against top-seeded Greenbrier — while a loss would put them in the third-place match at 1 p.m.

“We feel like we’ve put ourselves in a good position,” said Alfonso, whose team improved to 26-14 on the year with Tuesday’s win over Johnson. “The neat thing about this region format as opposed to years past is we normally would have had to win this match and then another one to qualify for state. But this win guarantees us at least another week, which is huge. You never want to take that for granted, especially having seven seniors this year and going into a total rebuilding year next year. We’re excited that our seniors get at least one more home match, and if we can get past Jackson County, we’d like to get another crack at Greenbrier.”

Thursday’s coming tilt with Jackson County will be a rematch of an intense battle between the two teams in Jefferson on Oct. 6 that saw the Wildcats squeak out a win in five sets over the Panthers to land the No. 2 seed for the region tourney.

The Panthers made quick work of Clarke Central in their first-round tournament match Tuesday despite being short a couple of key players due to COVID-19-related quarantines. Their status for Thursday was not clear as of press time.

“It will be a very big match with them, and we’re happy to be hosting,” Alfonso said. “Hopefully they’ll be at full strength and we’ll have another great battle. We have been a team all year long that has made some errors and kept some teams in games. Even (against Johnson), we failed to put them away at times. We used some subs, but we still made some errors that you don’t want to see at this point in the season.

“But that’s pretty much been our identity this season. If we play really well, we can hang with anybody. But if we’re not, then anybody can play with us.”

If the Wildcats are able to win another region title or put together a string of success in the postseason, it’ll likely be in no small part due to the play of Emily Crocker, who has put together a sensational senior season, recording over 500 kills — just the second player in program history to accomplish that feat in a single season, Alfonso said.

“I told her when she was a freshman she could potentially be one of the best we’ve ever had, and she’s just continued to work hard and improve on her abilities,” Alfonso said of Crocker, who was named the region’s co-player of the year — the third straight season Apalachee has had a player take top region honors. “Teams have had stacked the side against her and Jenna Crowe because they know those are our top two horses, but she’s been dangerous. It’s a great credit to our setters. Megan Crocker (Emily’s sister, a freshman) sets her a good bit and has had a great year, and we’ve had a lot of different girls step up this season.

“If we do get to face Greenbrier this weekend, we’d like to think we have a shot at winning, but what a tall task that would be to beat a great team like that. I think our girls believe we can win this and we’ll see where it goes.”