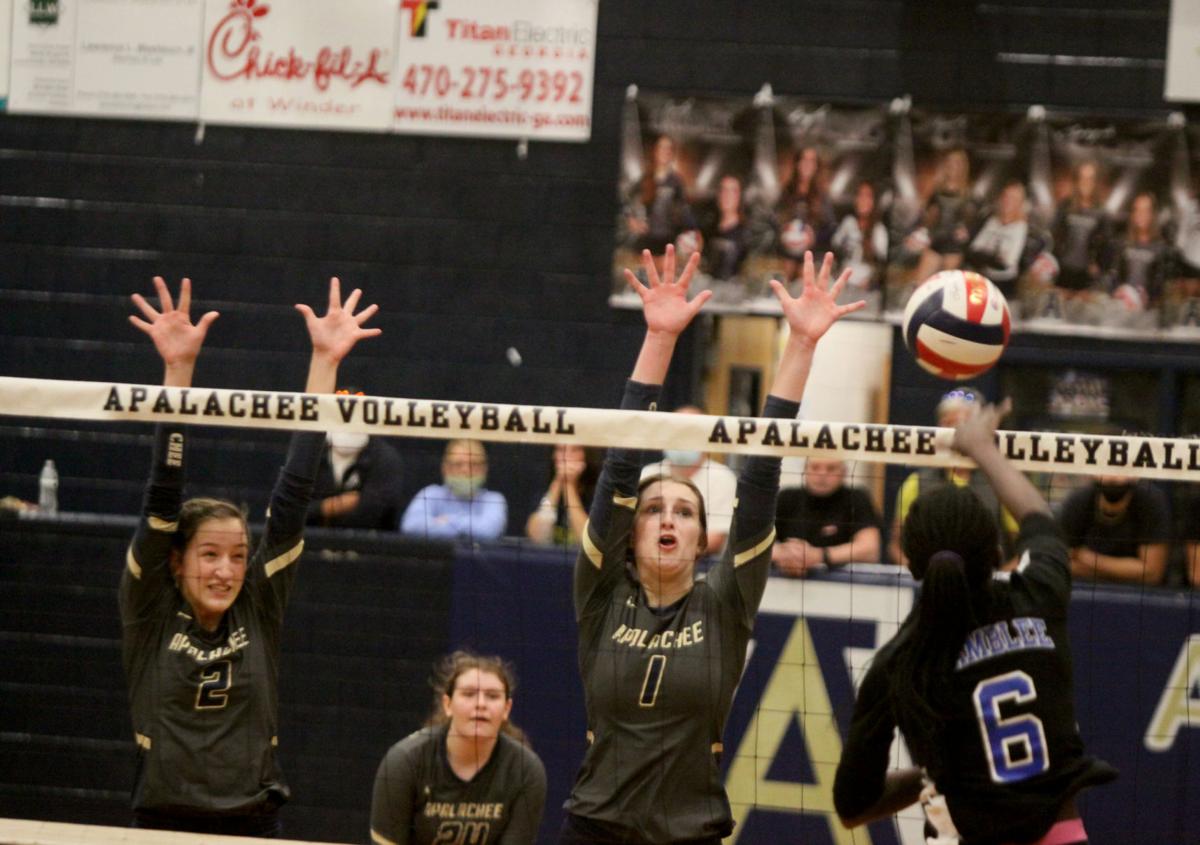 Apalachee's Emily Crocker (1) and Kathryn Massey try to defend a shot during a GHSA Class 5A first-round playoff match against Chamblee on Tuesday, Oct. 20. The Wildcats shut out the Bulldogs 3-0. 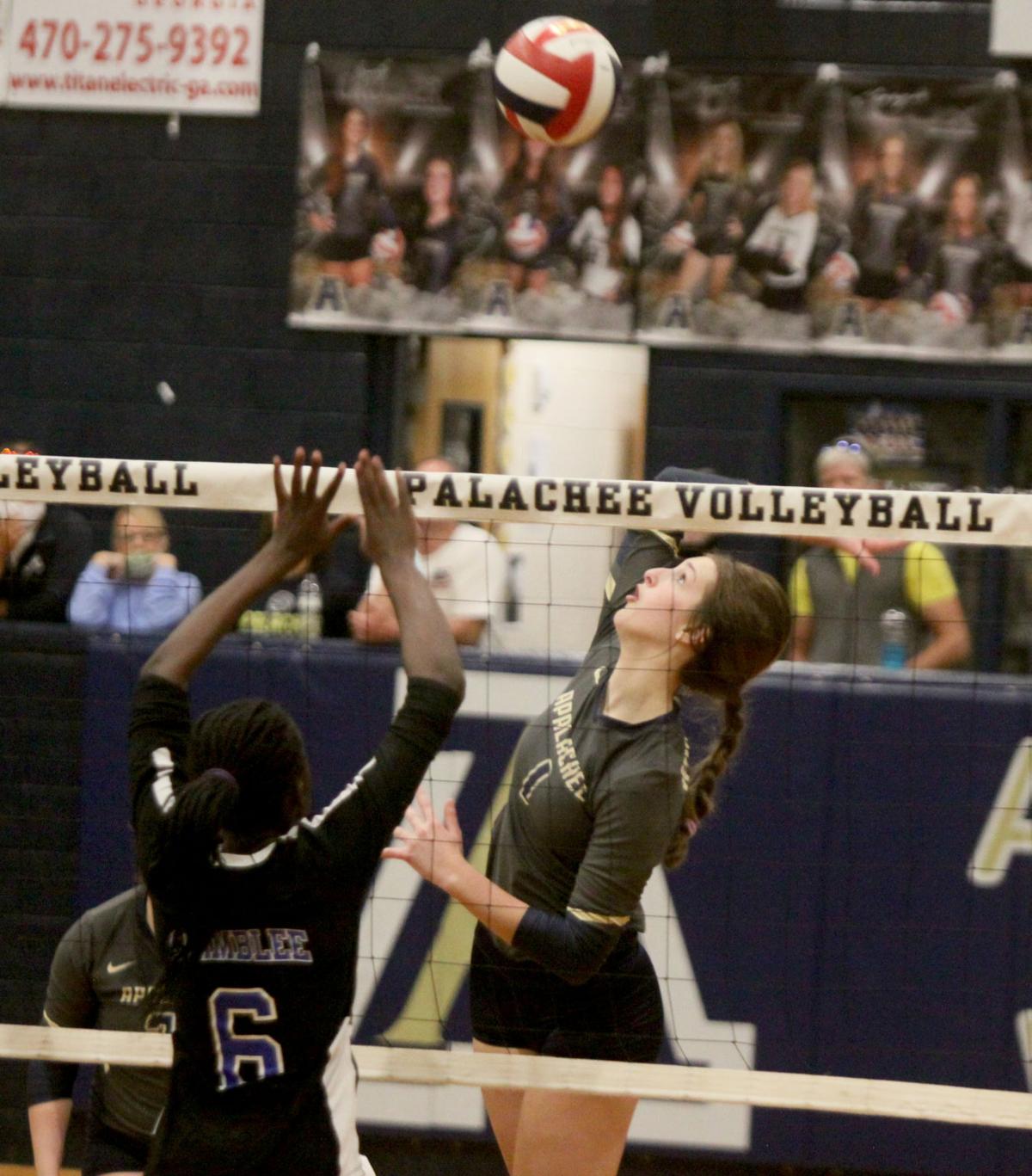 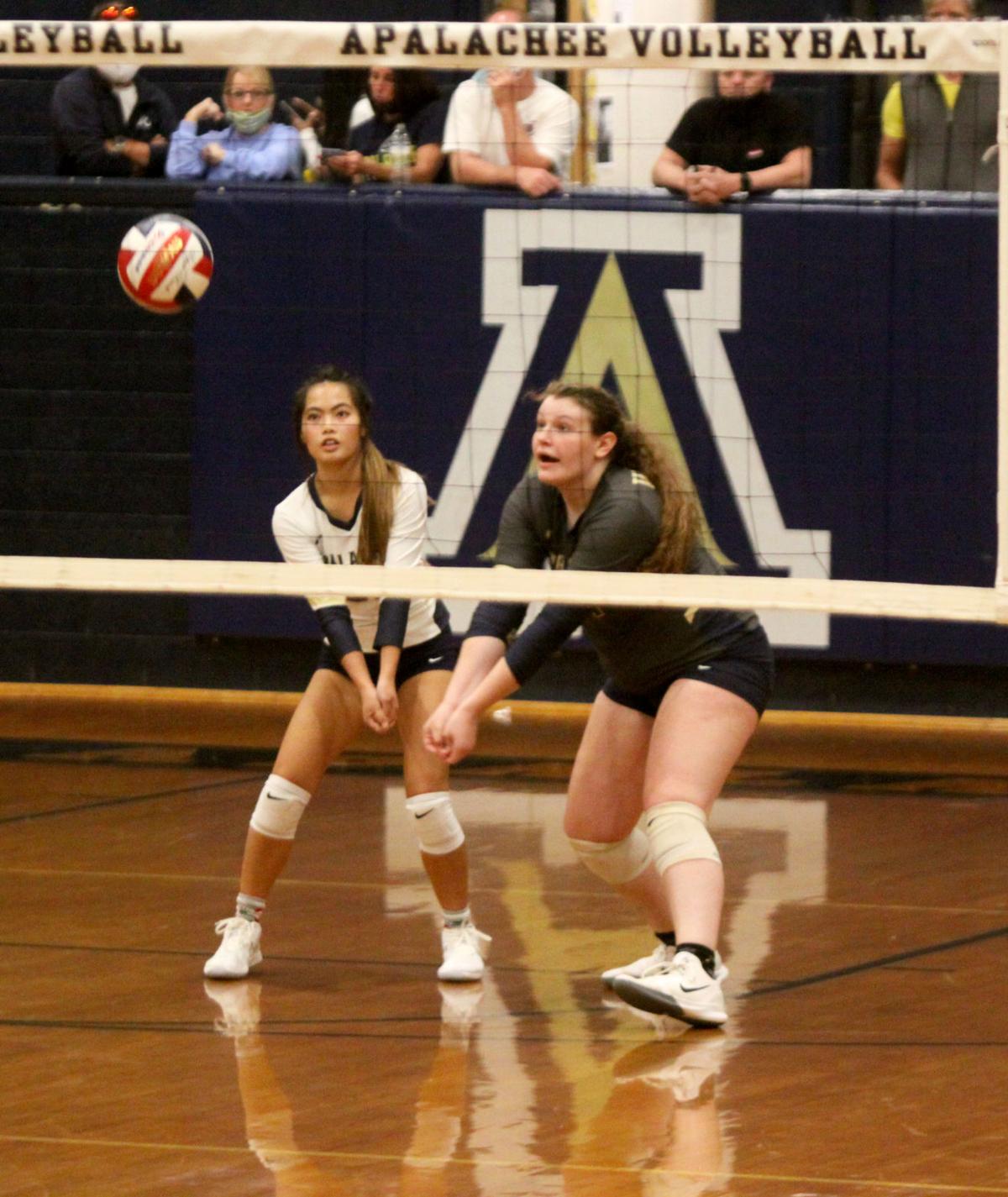 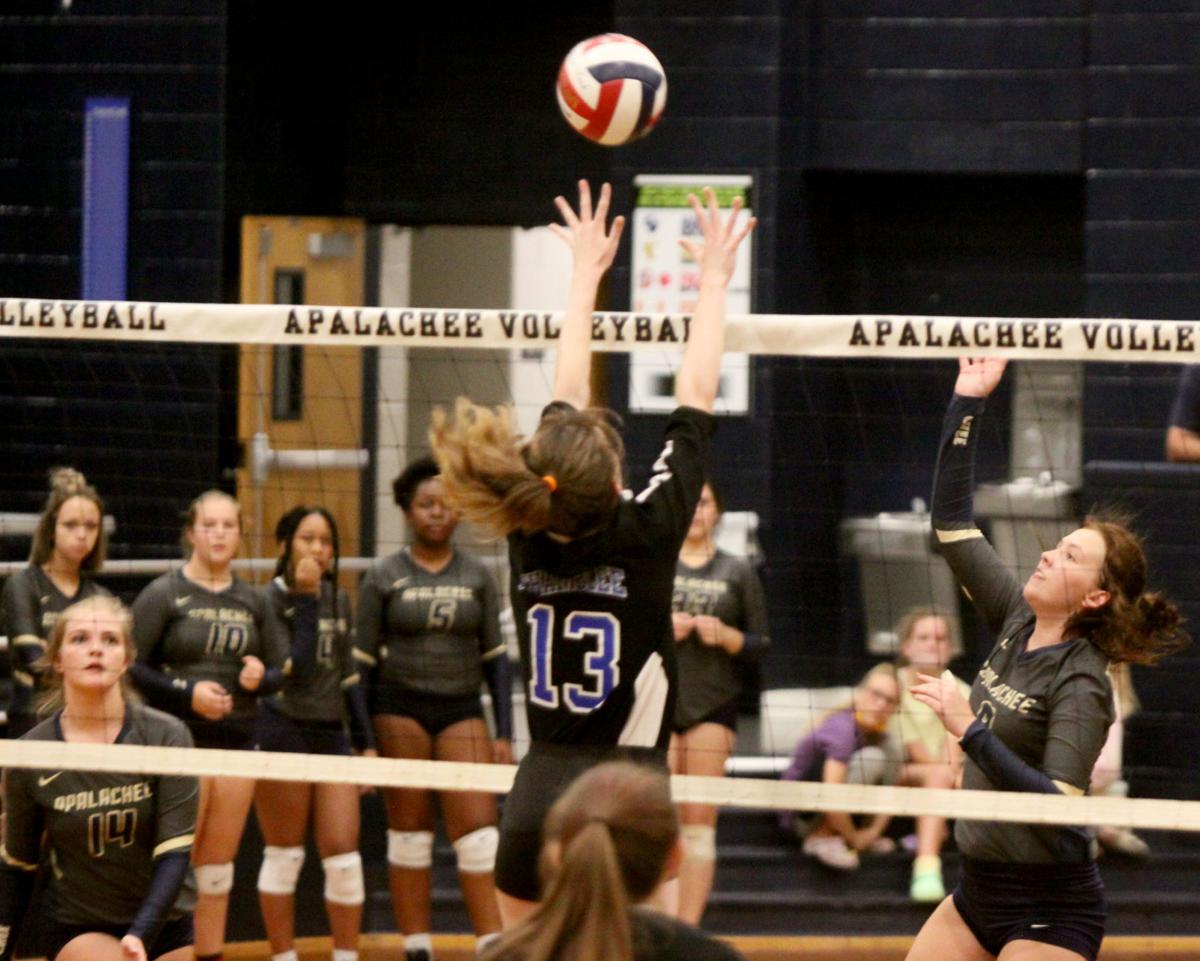 Apalachee's Emily Crocker (1) and Kathryn Massey try to defend a shot during a GHSA Class 5A first-round playoff match against Chamblee on Tuesday, Oct. 20. The Wildcats shut out the Bulldogs 3-0.

Apalachee volleyball coach Joey Alfonso didn’t have to remind his team, during the timeout huddle, of the position the Wildcats had been in three straight years in the state playoffs: holding a commanding 2-0 lead in either the first or second round before losing three straight sets to fall 3-2 and see their season end.

On Tuesday, Oct. 20, in their first-round GHSA Class 5A playoff match at home against Chamblee, the Wildcats again found themselves up 2-0 but in a tight third set that Chamblee had rallied to tie at 17-17. But for at least this round, they kept those postseason heartbreak demons at bay.

Apalachee went on an 8-3 run out of the timeout to close out the set, 25-20 and complete the 3-0 victory over the Bulldogs, earning a trip to the Sweet Sixteen for the second time in three seasons. The Wildcats, the No. 2 seed from Region 8, will now travel to Atlanta on Saturday, Oct. 24, to take on North Springs, the Region 6 champion, in the second round.

The win helped the Wildcats put behind them the disappointment of a 3-1 loss to top-seeded Greenbrier in the region tournament championship game Saturday, Oct. 17, in Evans, which Alfonso said caused a bit of a lull in the team’s practice performance on Monday.

“We didn’t practice very well yesterday, and we kind of played like we practiced at times today and were making too many errors,” Alfonso said. “(Chamblee) traveled and they may have been lagging a little bit there at the start. They missed five or six serves in that first game, and you can’t beat anybody doing that. It’s kind of like having three turnovers in a football game when you play Alabama. Down there against Greenbrier, I felt like we played well enough early on to win, but they had that one rotation we couldn’t get out of. They exposed on some of those transitions and those hurt us again a little bit tonight. We’ve to clean that up, but the nice thing is we’ve got three days to recover and get a ready for Saturday and a team that is good but one that I think we can compete with.”

After having little trouble in the first two sets against Chamblee, 25-15 and 25-17, the Wildcats (27-15) quickly jumped out to a 9-4 lead before the Bulldogs, the No. 3 seed out of Region 5, went on a 5-0 run to tie it, and the set went back-and-forth before Alfonso called the timeout at 17-17. But Apalachee refocused and got some help from the Bulldogs on a pair of errant serves to pull back ahead before Emily Crocker notched a pair of kills to put the match on ice.

Apalachee had taken strong teams into the state playoffs the last three seasons but ran into a tough draw early in the bracket and wasn’t able to get over the hump against those opponents after leading the best-of-five match 2-0 — Sequoyah in the first round in 2017, eventual state champion Pope in the second round in 2018 and River Ridge in 2019.

Alfonso said his team’s region schedule format this year — best-of-five versus best-of-three in previous seasons — has helped the Wildcats in 2020.

“This team has had to go through that, for better or worse, and we’ve only lost the two best-of-five matches to Greenbrier,” Alfonso said. “I think it’s really helped the learning process. And hopefully it will help us as we try to make a run in the playoffs. We know North Springs is going to be good, but it’s not going to be what Sequoyah, Pope and River Ridge were. We’ve had a tough road to get out of the bracket in 6A. And now dropping down to 5A, I wouldn’t say it’s been easier, but it’s definitely been different. When I look at this bracket, obviously we’re not as good as we were the last two years (when the team went a combined 97-12 and won back-to-back region titles), but I feel like we’re good enough to go further and make the Elite Eight for the first time since 2013.

“We’ll see if we can pull something off, but it’s exciting to be in this position.”