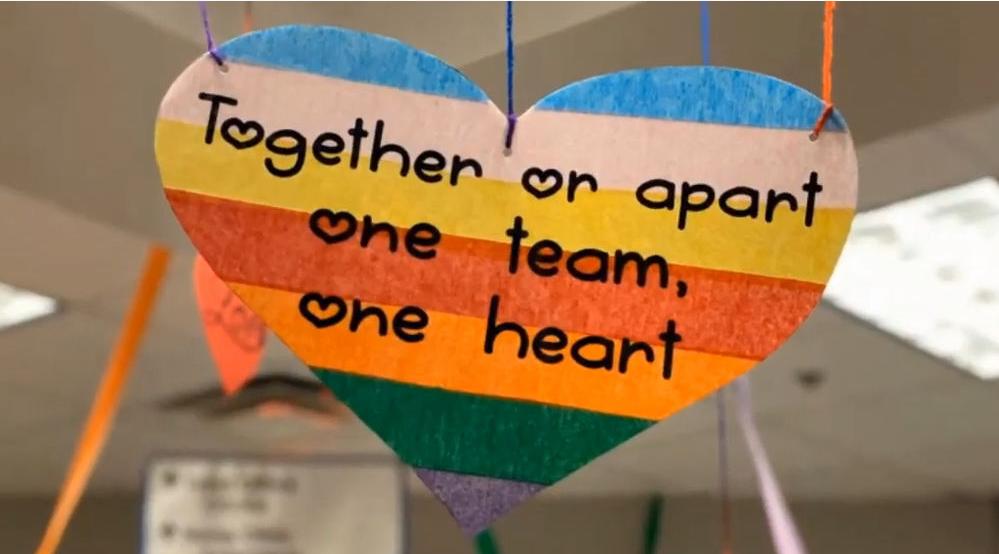 A screen shot of a slide presentation from the Jackson County BOE's Sept. 14 meeting. 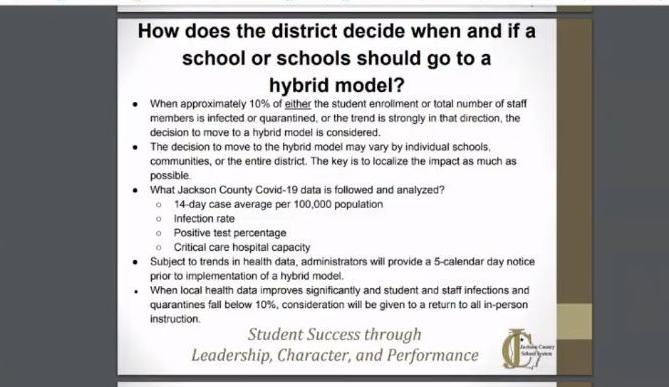 An outline of how the Jackson County School System makes decision about its response to COVID virus cases. The information was presented during the Sept. 14 BOE meeting.

A screen shot of a slide presentation from the Jackson County BOE's Sept. 14 meeting.

An outline of how the Jackson County School System makes decision about its response to COVID virus cases. The information was presented during the Sept. 14 BOE meeting.

The Jackson County School System won't move its two high schools to a hybrid attendance model after all.

But a vocal pushback from some parents and a downward move in the community's COVID rate has put those plans on hold, at least for now.

During the Sept. 10 meeting of the Jackson County Board of Education, school superintendent April Howard outlined plans to move the high schools to the hybrid model as early as Sept. 16. But the following day, the system's quarantine trend data moved downward. In addition, system leaders were reportedly flooded with emails over the weekend from parents opposed to the move.

That backlash was also evident at the board's Sept. 14 meeting when a number of parents spoke in opposition to the hybrid plan, saying all students should remain in-person at the high schools, at least until the COVID numbers become worse.

The system has considered that having 10% of students out for quarantine as the line at which schools should move to remote learning or a hybrid system.

Howard said that at JCCHS, over 10% of students attending in-person classes were under quarantine last week, a situation that prompted the discussion of moving to a hybrid attendance model in a bid to slow that quarantine rate.

"We just have to do what is manageable and fair and to protect the integrity and safety and do what's best for our students," Howard said.

The superintendent said the system follows guidelines from the state department of health and the CDC as to how it activates quarantine procedures and makes decisions related to the virus.

But one woman who identified herself as a nurse practitioner at Northeast Georgia Medical Center downplayed the effectiveness of masks during the board's Sept. 14 meeting and appeared to question the seriousness of the virus and some of the data being distributed by the CDC and other agencies.

During the free-wheeling back-and-forth with parents on Sept. 14, BOE chairwoman Lynne Massey-Wheeler made it clear that the day-to-day decision-making in the system is done by Howard and her staff, not by the board. Several BOE members also chimed in during the discussion, defending how Howard had been handling the COVID crisis and its impact on the school system.