Banks County planners will hear from the developer of an apartment complex at Banks Crossing about several proposed changes to the project.

Capstone Acquisitions, Gainesville is asking to rezone 1.56 acres on East Ridgeway Road and Faulkner Road from C2 (Commercial District) to R2 (Multifamily District). This property was purchased to add to the apartment complex already in development that was approved in May.

The Banks County Planning Commission will hear the request when it meets at 6 p.m. on Tuesday, Jan. 7, in the board room at the Banks County Courthouse Annex, located at 150 Hudson Ridge, Homer.

In addition to this rezoning request, the developers would like to request a variance to the overall development from 14 units per acre to 14.75 units per acre. This would increase the total apartments from 223 to 234.

The developers have also incorporated into the development recommendations from the Banks County planning commission and board of commissioners, which include lighted sidewalks throughout the development and turning the access points on Faulkner Road to exit only. Capstone has also created two commercial out parcels: A medical office parcel and a retail parcel.

The planning commission will make a recommendation to the BOC, who takes final action on zoning issues. The BOC meets at 6:30 p.m. on Tuesday, Jan. 14, at the Banks County Courthouse Annex.

ALSO ON THE AGENDA

Also on the agenda at the Jan. 7 planning commission meeting is a request from Martin Bridge Properties, Athens, to rezone 17 acres on Highway 59 from ARR (Agricultural Rural Residential) to M1 (Industrial). Plans are to include the 17 acres in a planned 87-acre industrial park with four to five businesses.

Todd Lunsford and David Farmer were recognized at the December 10 meeting of the Joseph Habersham Chapter, Georgia Society, Sons of The American Revolution (SAR).

Lunsford and Farmer are both from the Banks County Fire and EMS Department.

In presenting the EMS Commendation Medal to Lunsford, officials stated: "Todd has the heart and drive of a true hero. Todd does not like to be recognized for his extra efforts and tries to portray himself as 'just doing his job,' however, Todd goes above and beyond daily. He spends hours, off-shift, checking on people both patients as well as co-workers, helping patients get the resources they so desperately need and following up on those resources to make sure the ball is rolling forward. Todd doesn’t complain and is always up for a challenge. One example of many of Todd’s successful calls is while at his full-time position with Habersham County Emergency Services on January 22, 2019, Todd was able to assist a 17-year-old female who was suffering from what was originally thought to be a seizure. As it turns out, this female was diagnosed with an Arteriovenous Malformation 'AVM rupture – bleeding in the brain.' After five surgeries, months in ICU and rehab, the student returned to her senior class where she will graduate this year with honors."

Lunsford began his part-time career with Banks County Fire & EMS in May of 2013. "Todd is a huge asset to our family here at Banks County," officials stated.

In presenting Farmer with the Fire Safety Commendation Medal, officials stated: "David Farmer began his volunteer service with Banks County Fire & EMS on January 2, 2014, with absolutely no certifications other than Mod 1. Since being employed here, he has obtained: Firefighter 1, Apparatus Operator, First Responder/CPR and Haz-Mat certifications. David is always willing to help in any area possible. David attends weekly trainings, mentors newly-recruited volunteers and attends most all fire calls if he is available. David was nominated Employee of the Year for Banks County Fire & EMS in 2017."

Farmer is employed full-time as the the director of transportation for Jackson County School System. Farmer was named director of transportation in 2014, but he has been part of the Jackson County School System since his own school days. A Jackson County native, he attended Benton School and graduated from Jackson County Comprehensive High School in 1990. He earned a bachelor’s degree in agriculture from the University of Georgia in 1994 and worked in sales and construction before returning to school for his teaching certificate and a master’s degree in special education. He began working in 2007 at South Jackson Elementary School as a special education teacher, and he was the 2014-15 system-wide Teacher of the Year. A volunteer with the Banks County Fire Department, he recently earned Firefighter I and First Responder certifications.

The Joseph Habersham Chapter was chartered November 21, 1996, and is a chapter of the Georgia SAR Society representing Habersham, White, Rabun, Stephens, Banks, and Franklin counties. The Sons of the American Revolution is a national patriotic, historical and educational non-profit organization whose members are male lineal descendants of the patriots who fought in, or supported the American Revolution. Anyone with an interest in genealogy and who's patriot ancestor(s) fought or aided in the American Revolution between the years 1774-1783 is encouraged to join the group. 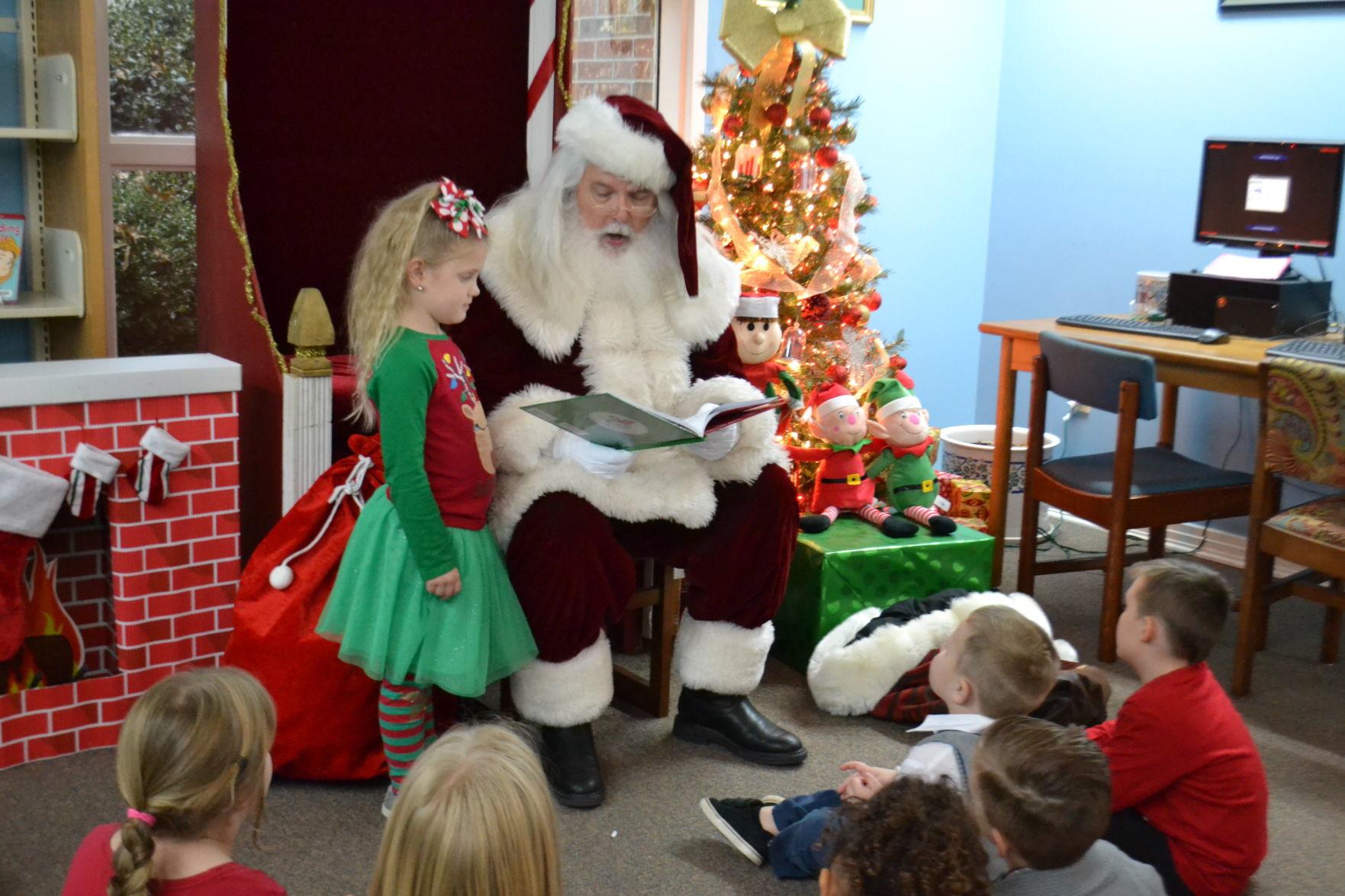 Karen Hill assisted Santa by turning the pages of the story that he read at the Maysville Public Library’s Christmas party.

Early deadlines will be in place for the Dec. 25 and Jan. 1 issues of The Banks County  News.

The deadline for classified and display ads will also be at noon on those Fridays.

The early deadlines are due to the Christmas holiday and New Year’s Day holiday.

The newspapers those weeks will be delivered one day ahead of the regular schedule and will be at news stands early.

Banks
Railroad crossing to be closed in Lula for repairs
Angie Gary
12.26.19

The railroad crossing in Lula at Hwy. 52 and Lula Road and at Hwy. 51 and Main Street/Athens Street will be closed for repair on Monday, Jan. 6, and Tuesday, Jan. 7.

The entire crossing will be closed in both directions.

The Lula City Council is considering extending a moratorium on issuance of business licenses for new vape shops within the city.

During a meeting held Dec. 9, Mayor Jim Grier reported he has spoken with other local city officials and everyone appears to be moving very cautiously on this issue.

“Everybody is concerned about this and wants to make sure we do the right thing instead of doing something and it turns out to be not quite what we intended,” said Grier. “We are also hearing that there is going to be some action taken by the legislature during the next session on this item.”

The council is considering an extension of the moratorium on licenses for vape shops in order to gather additional information in regard to the dangers of vaping and to have a better understanding of what the legislature might consider.

“We want to make a decision that is going to be good for the citizens of our city as well as something that is reasonably enforceable,” said Grier.

The council will be addressing this issue during the Jan. 16 council meeting.

In other business, the council,

•will be applying for a Community Development Block Grant to replace some water lines throughout the city. If the grant is approved, the project is estimated to exceed $500,000.

•will be making amendments to the 2018-2019 budget to reflect changes during the fiscal year. In addition, the council will be readdressing the city millage rate to confirm approval to roll back the rate.

•received an update regarding wi-fi service. City Manager Dennis Bergin said wi-fi at the depot should be hooked up by the end of the week and when completed, service and security cameras will be operational at the depot and the Veterans Park. Once some issues are addressed at the walking trail, service will be available there as well. According to Bergin, wi-fi will be available for public access at these locations.

•heard from Bergin that phase two of the depot renovation project could be completed by the end of the week.

•is considering changes to require a supplemental charge of $100 for each burial at the city cemetery to offset the cost of making improvements to the grave site.

•heard from Bergin that EPD will require the city to hold a public hearing before the Highway 365 private well can be transitioned for public use.