Two embattled Hoschton leaders are out of office following months of controversy in the small West Jackson town.

The resignations leave in a three-member council, which cannot operate under the city’s charter. That forced the council to pursue a court decision to allow its continued functioning until the two vacant seats are filled.

Meanwhile, the council also voted to fire its current city administrator Dale Hall for cause instead of accepting his resignation. That move — on top of the two city council resignations — leaves the town with essentially no experienced executive leadership in city hall.

Kenerly came under fire in May after a fellow council member said she did not include the resume of a candidate for city administrator because he is black and she didn’t know if the city was “ready for that.” In a news article, Cleveland defended Kenerly and added his views against interracial relationships.

The backlash was swift, with citizens calling on the two council members to resign. When that didn’t happen, a group formed and pushed for a recall election. After months of working through that process, gathering signatures from citizens in the town and going through court hearings, the recall hearing was set for Jan. 14. By resigning, Cleveland and Kenerly will avoid that recall.

Cleveland’s and Kenerly’s resignations leave the city council essentially inoperable. The town's charter doesn't allow the mayor, or in the absence of the mayor, the mayor pro tem, to vote on city matters. But with just three council members left and no mayor, there wouldn't be enough voting members to transact city business.

In related action on Dec. 14, the council voted to allow attorney Thomas Mitchell to move forward with a motion in the Superior Court of Jackson County that would allow the newly-elected mayor pro tem, Adam Ledbetter, to vote on city matters. That move would allow the three-member board to continue functioning.

The motion was filed on Monday, Dec. 16, but a hearing date hasn’t been set.

HALL REMOVED WITH CAUSE AND ARGUMENT

In another move, the city council voted Dec. 14 to fire city administrator Dale Hall "for cause" instead of accepting his resignation. Council members and Mitchell refused to say what that cause was.

Kenerly — who presided via phone over her last meeting as mayor — objected to the decision. Kenerly said Hall wasn’t a good fit for the city, but still objected to the firing for cause.

“I don’t like it worth a damn,” Kenerly said before calling for the vote.

Firing Hall "for cause" will allow the council to withhold his severance pay.

The firing follows a move by three of the town's council members that appeared to be an attempt to force out Hall.

Hall, who became the town's administrator in the summer of 2019, had rankled some council members by not providing information to the council quickly enough.

At a Dec. 9 meeting, council members Shantwon Astin and Ledbetter refused to support the adoption of the town's budget and a new garbage service firm because they said they only got the documents at the last moment before that meeting.

At a called meeting Dec. 11, Astin, Ledbetter and council member Hope Weeks voted to adopt an ordinance that outlines in detail when the city administrator is to provide the council with paperwork and how quickly he is to respond to council questions.

"Failure to comply with this policy shall be just cause for termination," the new ordinance said.

With Hall’s departure, along with Cleveland’s and Kenerly’s resignations, it leaves Hoschton with little experienced administrative leadership within the town. Council members Ledbetter and Shantwon Astin took office just last month, while council member Hope Weeks was elected in 2018.

It also appeared Dec. 14 that there’s some question on the council about the current public development director Justin Kilgore. During discussions about naming Kilgore as the elections supervisor for the March 24 election for the newly-vacated seats, Astin questioned why Kilgore was named for that position. The council also opted for Mitchell to negotiate a new garbage pickup bid instead of Kilgore.

Also at its recent meeting, the council:

•voted to hold a March 24 special election to fill Cleveland’s and Kenerly’s vacated seats. The qualifying fee for Cleveland’s council seat is $18, while the fee for the mayor’s seat is $27. Qualifying will be from Feb. 3 at 9 a.m. through Feb. 5 at 4:30 p.m.

•discussed its garbage contract, which was recently awarded to Waste Pro. The company later said it did not plan to move forward with the contract. The council authorized Mitchell to negotiate and finalize the contract with the town's second choice, White Oak.

•discussed getting city-issued devices for council members. The council agreed to do research on the issue.

•tabled a decision on naming a city clerk. 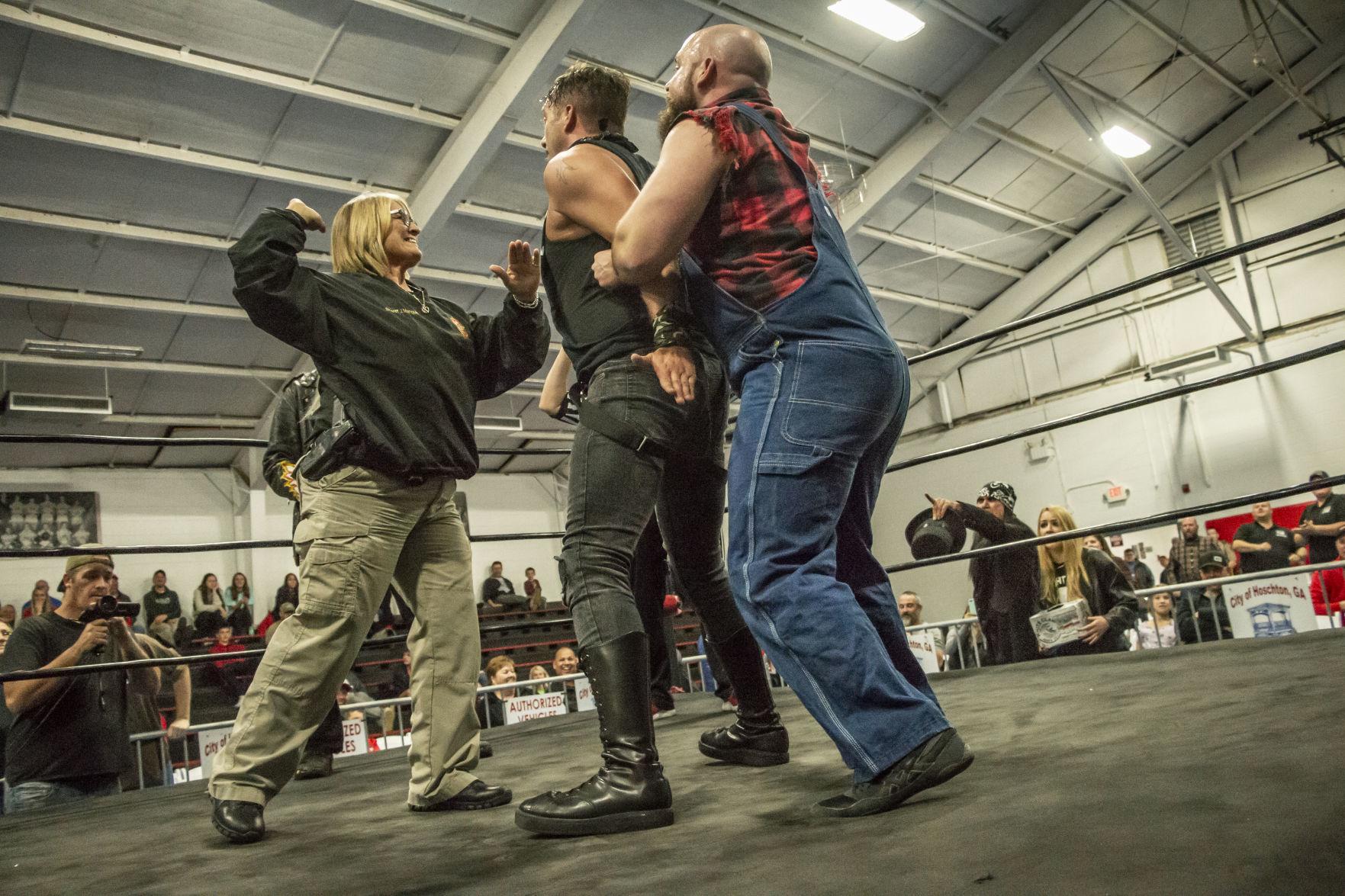 Jackson County Sheriff, Janis Mangum, smacks Bronson Garrett as Silas Dooley keeps his arms pinned behind him during the wrestling match benefitting the Jackson County Explorers program. Here, they are shown at the Historic Braselton Gym.

Some older property taxpayers could get a break if local voters approve making a change in the local school homestead tax provisions during the March elections.

In addition to the presidential preference primary being held on March 24, 2020, voters in all three school districts in Jackson County will vote on whether or not to raise the income provisions to qualify for a school homestead tax break.

Currently, property taxpayers age 62 and older can qualify for a school homestead tax break if they have less than $18,000 per year of earned income (which excludes retirement income.) The election in March proposes to raise the earned income limit to $25,000 per year.

Theoretically, that would allow more taxpayers to qualify for the tax break. That break takes $10,000 off of the 40 percent assessed value of the home, thereby reducing the overall tax bill.

According to Jefferson Board of Education chairman Ronnie Hopkins, the measure has to be approved in all three school districts — Jefferson, Commerce and Jackson County — for it to become law.

Jackson County School System superintendent April Howard said that it would be difficult to estimate the financial impact the measure would have on the system's finances, but she didn't expect it would affect a substantial number of taxpayers.

Jason Wester was named principal of Jackson County Comprehensive High School when the Jackson County Board of Education met Dec. 9 for its monthly meeting at East Jackson Middle School.

Wester has served as interim principal since July 11, when Dr. Pete Jones left for a position at the Gwinnett School of Mathematics, Science and Technology, and he has done "an outstanding job," said Dr. April Howard, superintendent of schools.

She pointed out that the process to select the school's new principal included parents, students and staff.

"Mr. Wester has a passion for his work and bringing the Panthers to new levels," she said. "He wants to do what's best for kids."

“We are blessed to have two outstanding high school leaders,” she said, noting that Wester and Palmer have been "working diligently" on the plans that will incorporate the new Empower College & Career Center into the curriculum.

Wester has worked as a social studies teacher and an administrator in several different states and districts during his 21-year career in education.

He returned to Jackson County schools in 2014, working at West Jackson Middle School for three years before joining the JCCHS staff.

Wester was raised in Florida and graduated from Countryside High School in Clearwater, Fla. He earned a B.A. in History and an MEd in Social Studies Education from the University of Florida.

He later earned an MEd in Education Leadership from the University of South Florida. He also is a graduate of the Gwinnett County Public Schools Quality-Plus Leadership Academy.

Braselton planners will consider a request for a special attraction at its upcoming meeting.

The Braselton Planning Commission will consider a conditional use to allow an outdoor amusement or recreational attraction at its Dec. 23 meeting.

Joanne Liu is requesting the conditional use for a little over 2 acres at 7304 and 7310 Spout Springs Rd. Liu plans a miniature golf course and batting cages on the property.

The Braselton Town Council will hold a second hearing on the request at its Jan. 9 meeting.

In other business, the planning commission will also consider a zoning condition change for 3705 Village Way in Liberty Village.

Lensned, LLC, is requesting a change to the planned unit development's conditions, reducing the required 40-foot development buffer on Hwy. 211 to a 20-foot buffer.

Braselton leaders may take action on a controversial and legally contentious rezoning proposed for property across from Chateau Elan on Hwy. 211 at a called meeting on Dec. 18 at 5 p.m.

The plan for a massive housing and commercial development on 230 acres around the Publix shopping center was turned down by the council in August. A subsequent lawsuit against the town remanded the case back to the council for another hearing, which was held Dec. 9.