The Commerce City Council will vote at its Jan. 21 meeting on giving raises to 69 employees as part of a compensation study done last summer and fall.

The raises will cost $77,225. City manager James Wascher said earlier the raises could be paid out of the currently budget because the city budgeted more money than it will cost for health insurance.

The study was done by Evergreen Solutions and the increases are covered by the savings. The total does not include the benefits for city employees.

The pay study will establish the minimum, maximum and average of salaries for a host of city jobs. The city current has a grading and pay scale system.

The council also heard a report and discussed conditions for buffers between industrial and residential property and between residential and commercial property.

The planning commission recommended the property be annexed and rezoned to M-I industrial. It put conditions on it for a buffer of 80 feet.

However, the Twin Creeks subdivision also is planned for an adjacent area and the city council directed the planning commission to consider buffer zones for all property in the city.

The council also directed that no building permits would be issued for Twin Creeks for up to 90 days or until the question of buffers are resolved.

Council members Monday discussed a buffer of 25 to 50 feet for residential property and about 50 feet for industrial. That would leave a buffer between the industry and residential of about 100 feet.

Jordan Shoemaker, Commerce planning and zoning administrator, said Jackson County has a buffer of about 150 feet – all from the industrial property.

Mayor Clark Hill said developers of residential property are required to have 20 percent of the land in greenspace and the buffer could be part of that 20 percent.

Shoemaker said the planning commission will have a work session on the topic in a 6 p.m. meeting Jan. 16. The commission expects to vote on conditions for buffers at its January meeting and forward that to the council in February.

Council member Bobby Redmon asked about using berms for buffers as another option. He said areas such as Mt. Olive Rd., where roads are right next to subdivisions, should have guard rails installed for residents’ safety. He said a vegetative buffer for sound and sight might also be required.

The Twin Creeks property of about 57 acres will be on the Jan. 21 agenda for annexation and re-zoning from AR in the county to R-1 in the city.

Other items on the Jan. 21 agenda include:

•a contract with Ideal Exterior Solution for $65,750 to replace the roof on the Commerce Cultural Center. Wascher said the unknowns on the contract are for replacing decking. He said he would prefer using plywood, costing $67 for a 4 x 8 sheet, and he would prefer having exposed gutters rather than an enclosed gutter system.

•a quit claim deed from the city to the Downtown Development Authority from the Municipal Electric Association Group for a piece of land on Harmony St. The DDA is building two new houses with a $300,000 community housing improvement program grant there and on Barber St. Natalie Thomas, DDA director, said construction should start in March.

•an annexation of 1.74 acres and a rezoning to R-1 on Westwood Dr. for a residence for Lynn Burchett and Kevin Minish.

•the re-appointment of council member Johnny Eubanks to the Downtown Development Authority board. 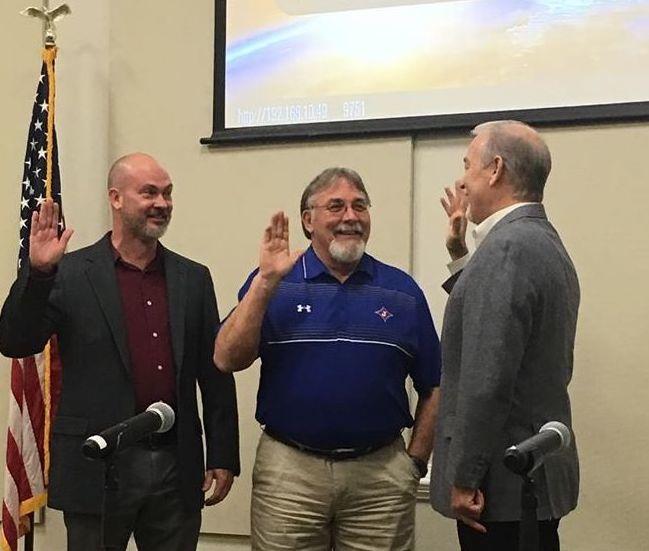 Jefferson city councilmen Clint Roberts (left) and Steve Kinney (right) were sworn in last Monday (Dec. 30) by mayor Steve Quinn. Roberts is the new councilman in District 5. Kinney begins his 32nd year in District 1. District 3 councilman Jon Howell, who was not present at the meeting, will be sworn in Jan. 13. 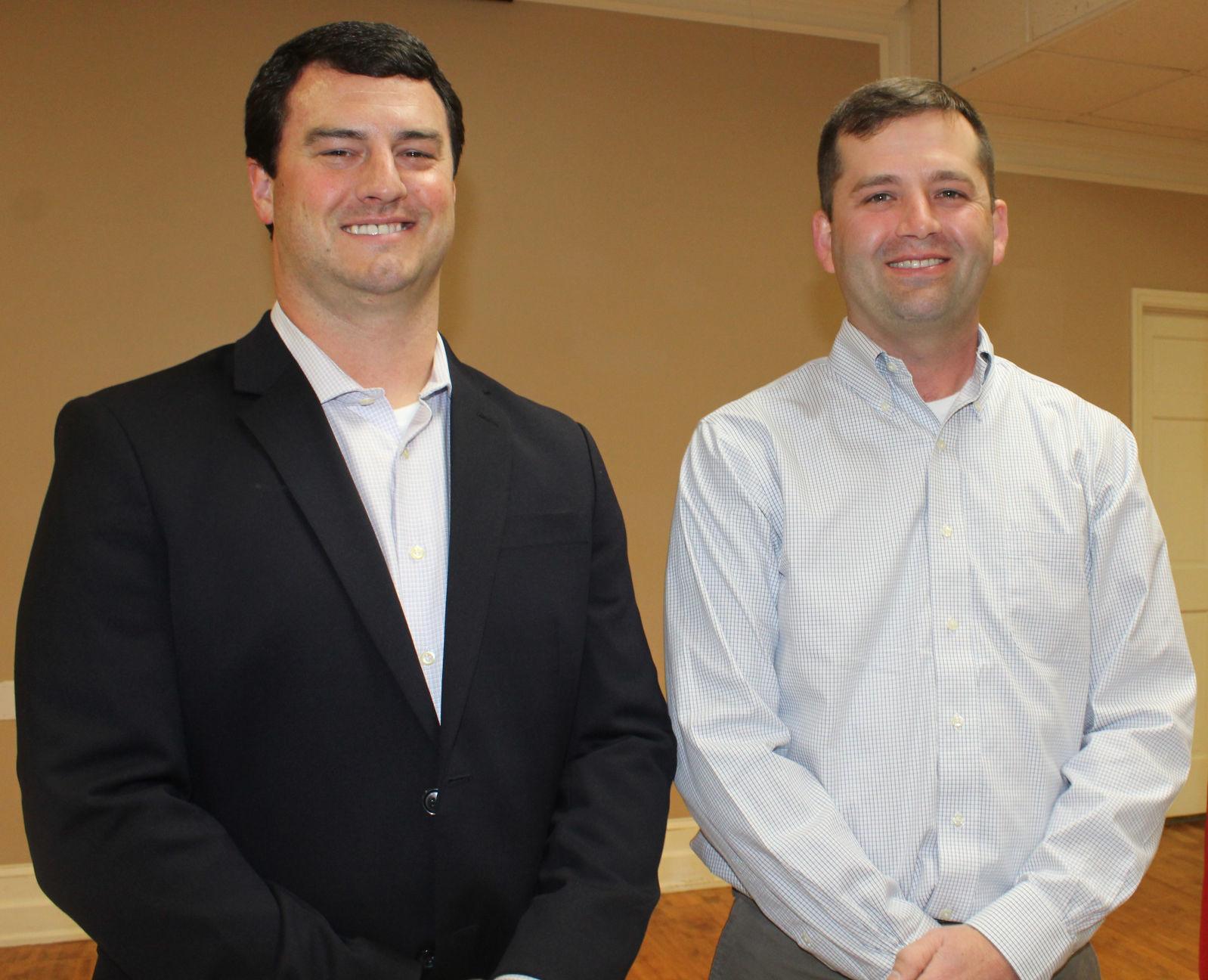 The city will hold qualifying for the empty mayor and council seat on Jan. 8-10. During a special meeting Christmas week, the council approved moving the qualifying dates, which had previously been set for February (no qualifying will be held in February).

Those wishing to qualify may do so at Hoschton City Hall.

The special election to fill the two seats — which were vacated by former mayor Theresa Kenerly and councilman Jim Cleveland — will be held March 24. Both unexpired terms run through Dec. 2021.

The last day to register to vote for that special election is Feb. 24.

Also at its Dec. 23 meeting, the council:

•approved the scope and contract for consulting services with Clark Patterson Lee.

•held a short closed session with no action following.

Hope Weeks recently announced that she will be a candidate for Mayor of the City of Hoschton.

Weeks has served on the Hoschton City Council since 2018.

“I’m very excited about the opportunity to run for mayor," Weeks said. "I’ve been on council for almost two years and while on council my focus has been on making sure the city is moving in the right direction through initiatives such as hiring a financial consultant to oversee the city’s accounting and organizing cleanup of the local park by the depot.

“This is a pivotal and exciting time for our city.  We expect a lot of changes to our community over the next few years and I want to work to be sure Hoschton is ready by updating our charter, ordinances and policies and providing oversight to major projects such as upgrades to our wastewater treatment plant, stormwater improvements and cemetery cleanup.  We have a bright future and as Mayor, I will work with our staff, council and citizens to ensure we meet the challenges along the way.”

Weeks has a background in local government and accounting.

The mayoral election will be held in conjunction with the Presidential Preference Primary on March 24. Qualifying for the election opens Wednesday, Jan. 8 (see related story).

Nicholson swore in mayor Jan Webster, and council members Mike Barfield and Lamar Watkins, at the Jan. 6 council meeting. All three were incumbents during the city's election.

In other action at the Jan. 6 meeting:

The next work session is scheduled for Thursday, Jan. 23.

A 20-year-old man suffered serious injuries after a two-vehicle crash near the Pendergrass Flea Market.

According to the Georgia State Patrol, Patino was turning left out of the flea market in a 2012 Hyundai Genesis, attempting to cross Hwy. 129. Patino failed to yield to a 2009 GMC Sierra driven by Denver Pittman, 43. Pittman was traveling east on Hwy. 129 towards I-85.

The front of Pittman's vehicle struck the driver's side of Patino's vehicle.

This is the second serious wreck at that intersection in recent weeks. Two teenagers were killed in a Dec. 21 wreck in front of the flea market.

A native of Union Point, Ga., Finch was a veteran of the Korean War where he served in the Navy from 1952 to 1955, spending time on the U.S.S. Iowa, U.S.S. Missouri and U.S.S Albany and also served on the staff of the Joint Command for the Atlantic before being honorably discharged.

Finch began his education career in Brooks County where he taught physical education and coached basketball. From 1956-1959, he taught and coached at Oglethorpe County High School before moving to Key West, Fla. to become director of testing. From there, he moved to Commerce where he became principal.

Services were held Dec. 21 at Tuckston United Methodist Church in Athens with interment at Clark Cemetery in Lexington.