The owner of the Chimney Oaks golf course has sued the city of Homer over its refusal to issue it a license to sell liquor-by-the-drink.

At the time, he said the golf course had no interest in selling liquor-by-the-drink because the license cost too much – $2,500 annually.

The lawsuit was filed in Banks County Superior Court Feb. 1. It names the mayor and council members as individual defendants.

The suit seeks a “writ of mandamus and declaratory judgment” against the defendants. The suit say a writ of mandamus “may be used to compel a public official to perform a duty of his or her office.”

The lawsuit says the city has issued “distilled spirit consumption licenses to other applicants” City clerk Carol Ayers said Feb. 11 that no business current has such a license. She said the city did issue those licenses “years and years ago,” but she said it had not been done recently. She said she tried to find where licenses had been issued and could not quickly find them.

The suit says the application “was denied without any opportunity for a hearing and without written notice of the denial.” It also says the golf course owner “met the requirements necessary” to get a license.

The city plans a referendum in March on three questions about alcohol sales at the golf course. The referendum is scheduled to be on the presidential primary ballot. The three questions, at the suggestion of city attorney David Syfan, deal with the sale of beer and wine on Sundays and with liquor-by-the-drink on Sundays.

Calls to Doug Cheek, Homer mayor, was not returned Feb. 11. Calls to M. Tyler Smith, attorney who filed the suit, also were not returned.

Syfan said only the suit had been served Feb. 3 and “therefore there are 25 days before a reply is due.”

Council member James Dumas, who told the council last fall he was talking to Day on a monthly basis, said by email he was “surprised” by the suit.

Previous licenses for distilled spirits, he said, “were before my time” serving on council.

The lawsuit also seeks damages from the city for the loss of revenue and seeks for the city to pay its attorney’s fees for the suit. 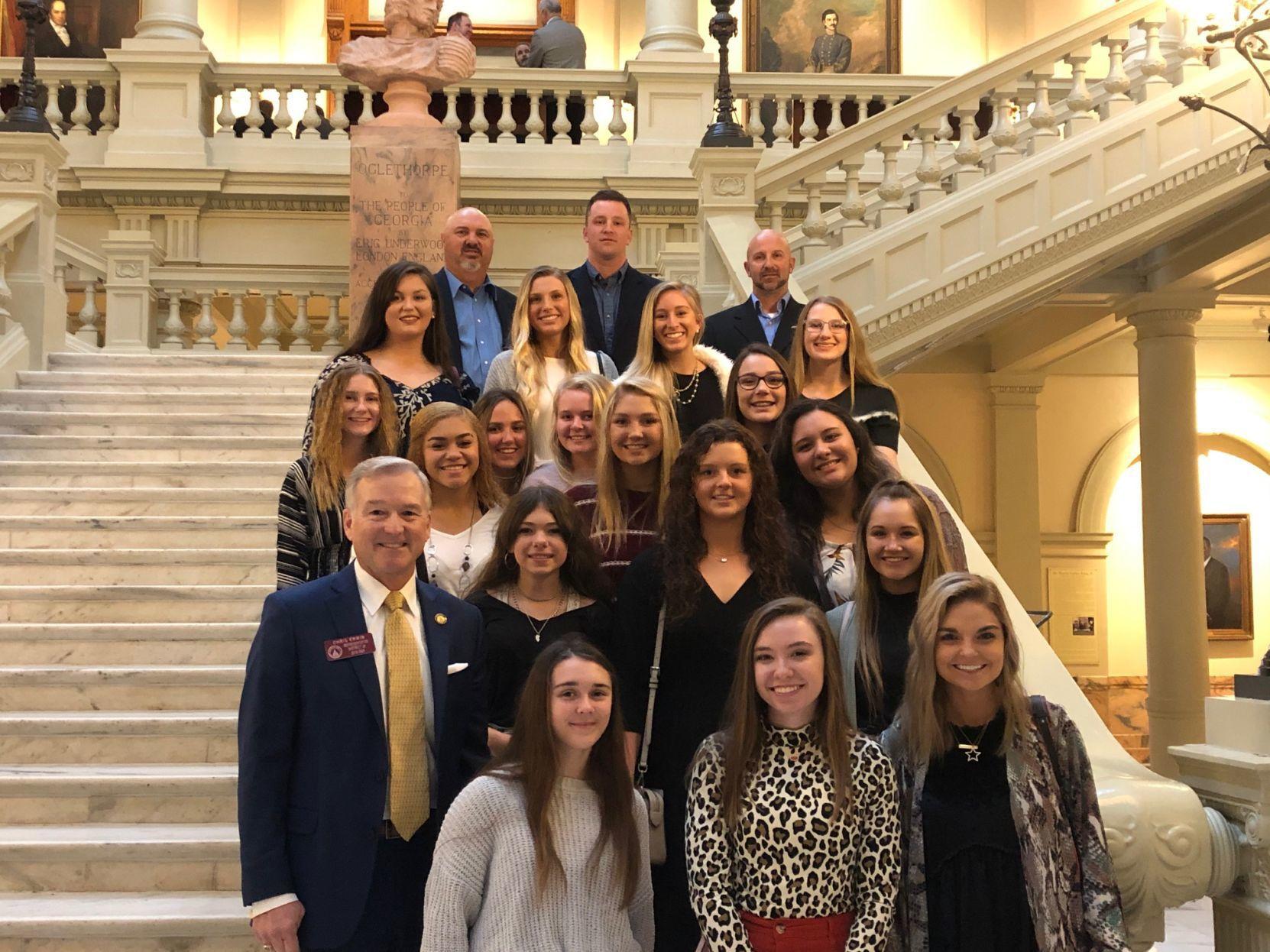 Noel Brown Ventrice has announced her intentions to seek the Magistrate Judge’s position.

She is a graduate of Banks County High School and received her bachelor’s degree in accounting from Piedmont College. She worked for the Banks County Tax Commissioner from 2010-2013 and has been a governmental accountant for the last three and a half years.

Ventrice is married with two sons; one is a student at Banks County Elementary School and the other is at Homer Baptist Preschool. She is a member of Nails Creek Baptist Church where she teaches the toddlers and tots class on Sunday mornings.

“Banks County is where I grew up, where my parents and their parents grew up, and where I have chosen to raise my family,” Ventrice states. “My grandfather, who proudly served as Banks County Sheriff for 16 years, helped teach me right from wrong and how to make decisions based on facts, not feelings. This is just one reason I want to serve as the next Banks County Magistrate Judge and I ask for your vote and support this spring.”

Brad McCook has announced his decision to seek election for the office of Banks County Commissioner in District 4.

“Banks County has been home to my family for over 80 years, and I have been blessed to live and raise a family here for the entirety of my adult life. I have served as Chairman on the Banks County Planning Commission and have been a member for over 9 years, served on the Banks Comprehensive Land Use Committee for 2019, been a proud member of the Banks County Republican Party, and have worked in the engineering department at Athens-Clarke County for over 16 years. I am a proud member of the Grove Level Baptist Church family, where I help work with the youth ministry. I care about this county and the people who live here, and that is why I have decided to run for the District 4 Commissioner vacancy. I look forward to serving the people while continuing to make Banks County a great place to live, work, and raise a family. Through accountability, integrity, fiscal discipline, and smart growth, I believe we can help shape the bright future of Banks County.”

Jefferson native Andy Garrison announced this week that he plans to run for the Georgia State Senate District 50 seat, a position that is  currently held by John Wilkinson, who recently announced his intention to vacate the seat to run for the U.S. House of Representatives.

"I was born and raised in Jefferson and have lived in North Georgia all my life," Garrison said. "As Director of the State Public Safety Training Center in Athens, I have served northeast Georgia for over 30 years by training and educating your public safety personnel. I have served on the Jackson County Area Chamber of Commerce for many years and recently completed a year as chairman. During my tenure at the Chamber and through my business, I have seen north Georgia change. Even though change is inevitable, I believe it can be managed in order to make the change beneficial to our communities."

Garrison has an extensive background in business consulting, real estate and law enforcement. He retired as the Director of the Northeast Georgia Police Academy in 2011 and is currently the principal managing partner of Inland Realty in Jefferson and president of The Garrison Company.

He has also been involved with local community volunteer groups since the early 1980s. His diverse collection of activities include the Hurricane Shoals Tumbling Waters Society, Jefferson’s Community Theater, Sons of the American Legion and various local business associations.

His education includes an undergraduate degree in Criminal Justice from Georgia Southern University and a master’s in Public Administration from Brenau College.

The OneGeorgia Equity Fund provides financial assistance to eligible communities to help build capacity and the necessary infrastructure for economic development. The program is designed to serve as a flexible community and economic development tool, providing grants and loans for projects in rural Georgia. OGA programs are administered by the Georgia Department of Community Affairs (DCA).

“For years, the County Commissioners and the Development Authority have been discussing plans for the Martin Bridge Road exit, “DCA Commissioner Christopher Nunn said. “We are excited about the momentum as plans begin to unfold.”

The Development Authority of Banks County previously received grant funding from the Appalachian Regional Commission to conduct an Economic Development Blueprint for Banks County. This blueprint emphasized the Martin Bridge Exit off I-85 as a major economic activity center for the area.

The initial project will generate $20 million in private investment