One of the last buses to unload in the morning at Holsenbeck Elementary School brings a load of students to the school.

A task force of nine people has met a few times and will begin meeting regularly after the mid-year break.

Ken Greene, assistant superintendent for support services, oversees that task force and emphasizes the group’s “goal” is to make recommendations for bus service during the 2020-21 year at the February work session and approve those recommendations at the March 3 board meeting.

That would give the school system nearly five months to “use every means of communication available” to tell parents — and tell them again — what the bus routes will be and when they will run.

The transportation department, which also has a new director, Jason Ayers, who came to Barrow from Franklin County several weeks ago, will have new deliveries to make in the upcoming year.

The Barrow Arts and Sciences Academy, the county’s third high school, will open in August. It is a “choice” school — students decide to go there. But Barrow County has its twist on the new school — it will provide transportation to the school for all students.

That will mean extra runs each day from at least six other schools — four middle schools and two high schools.

A “three-tiered” bus system could be a change, he said. That would group grade levels — elementary, middle and high schools — together, which might mean changing starting times for the school day.

Now, the district has two "tiers,” one for middle and high schools and the second for elementary schools.

Greene said the shuttles from other schools to Sims Academy, AIM at the Center for Innovative Teaching and the new Barrow Arts and Sciences Academy were “a challenge.” Sims and the new high school are adjacent to one another, but students go to and from Sims twice a day.

Greene said, “I don’t know,” a lot recently when asked about the options for getting students from one school to another or from school to home or vice versa.

The district now has three times a day it takes students to Sims Academy, which is adjacent to the new high school. Students are delivered for each period, starting with the second. Could buses make those deliveries and run a route earlier from a school to the new school?

“I don’t know, yet,” Greene answered.

The district also delivers kids daily to the Center for Innovative Teaching. That also is one of those “school-to-school” rides. Greene said a major factor for buses going to Sims Academy, CFIT and now BASA, is how the instructional time for students is affected.

Greene said the trips to Sims take at least 15 minutes. That is half an hour of time that cannot be used for teaching. Similar considerations are given to CFIT and, next year, to BASA.

School Bus Logistics is a consulting firm working with the task force. Greene said the “task was so big” a consultant was needed to sort through the options. In addition, the consulting company is familiar with the district’s software — mapping bus routes is a complicated exercise.

After the main routes in the morning and delivers to Sims and BASA, the district has to deal with special education trips, regular field trips and sports teams for away games.

Greene said schools have been notified that their school governance teams should look at the question and their buses.

He said others may be asked to comment on particular scenarios as the task force gets closer to February. He does not rule out asking other people to be on the task force.

The district also is training bus drivers, he said. One reason to study the question is to determine the number of buses needed, which then tells Greene how many drivers are needed.

The system has been short on bus drivers, which is nearly a continual problem, most of the year. If the ones being trained now make the grade, Greene said, the district will have just about enough — for now. 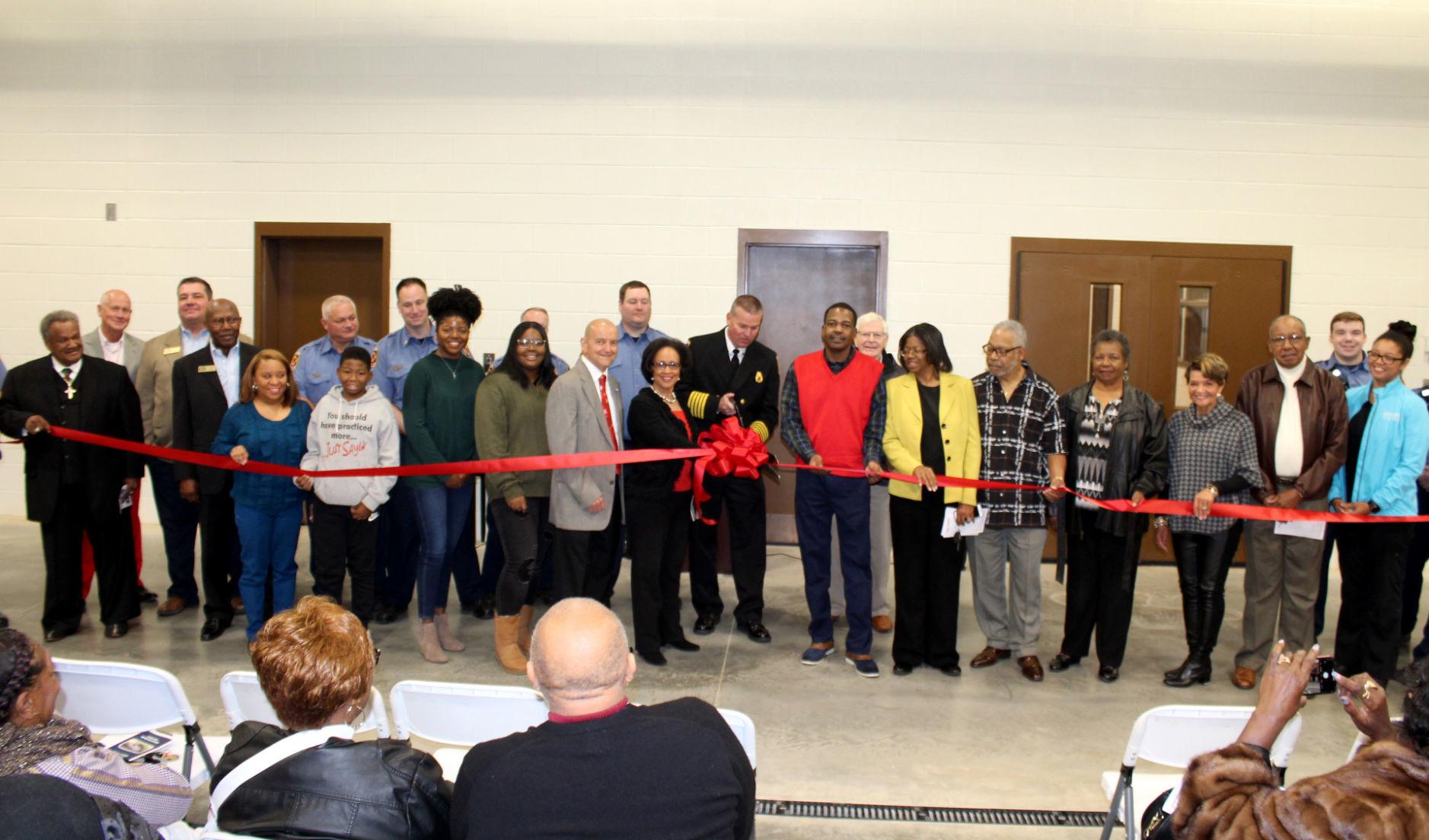 A ribbon cutting ceremony was held Dec. 6 for the new Charlie Eberhart Fire Station near the intersection of Loganville Highway (Highway 81) and Matthews School Road in Winder. The Winder Fire Department relocated its Station 2 to the new building for quicker access to the city's response areas around Highway 316 and the south side of town. The new station's address is 492 Loganville Hwy. The station is named for the late Eberhart, who served on the city council from 1991 until his death on Jan. 30, 2013. Eberhart was a member of the council's fire committee. Speakers at the ceremony included state Sen. Frank Ginn, Mayor David Maynard, councilman Travis Singley, Fire Chief Matt Whiting, and family members Pamala Eberhart, Nisha Eberhart, Kenny Eberhart, Clifford Eberhart, along with the Rev. Alfred Hazel.

The Winder Downtown Development Authority board, during its Thursday, Dec. 19 meeting, approved the sale of $7.3 million in bonds to facilitate the construction of a new Division of Family and Children Services building, which the authority will own after 15 years.

The building, projected to be around 24,000 square feet, will be constructed on 3 acres of land on Lays Drive off East Broad Street in Winder, near the Social Security Administration building. It will roughly triple the amount of space occupied by DFCS around Winder — buildings which local officials have said is far inferior to the planned facility. Construction on the facility is expected to begin in the summer.

Buford-based Forum Development Services, which was awarded the project by the State Properties Commission, will oversee construction of and manage the facility, which will be leased to the state for a 15-year term. Those lease payments will pay for the $7.3 million debt at a 3.18-percent interest rate, according to the bond resolution approved by the DDA. Forum has constructed two dozen DFCS buildings and several other similar facilities across the state over the last 20 years, Margaret Bowen, the company’s president, told the DDA in a meeting earlier this year.

The DDA will act as a financing “conduit” for the project and will have ownership of the building after the 15 years. At that point, the state would either continue leasing the building and making payments to the DDA, or the DDA could find another use for the building.

The DDA has discussed the project for the past several months and, in September, created the Winder Lays Drive Project Corporation to hold title to the building. Authority leaders have said the project is a “safe” way to eventually have its own money coming in.

Forum representatives told the board that even if the state exercised an option to terminate the lease ahead of time, which has never happened, or if the company were to go under, the DDA would not have any financial liability.

“It’s almost a no-brainer for us,” then-DDA chairman Chris Maddox said at a meeting in May. “We’re going to be a pass-through for some financing. Someone else’s money is going to fund it. Someone else’s money is going to do the development. If the worst-case scenario happens, we might have a little egg on our face but we’ve got no financial responsibility.”

In other business at the Dec. 19 board meeting, Maddox tendered his resignation as chairman and the board appointed Jason McDaniel as the new chair.

The following American Red Cross blood drives are coming up in Barrow County:

All blood types are needed to ensure a reliable supply for patients, leaders state.

A blood donor card or driver’s license or two other forms of identification are required at check-in. Individuals who are 17 years of age in most states (16 with parental consent where allowed by state law), weigh at least 110 pounds and are in generally good health may be eligible to donate blood. High school students and other donors 18 years of age and younger also have to meet certain height and weight requirements.

Bring One for the Chipper event set

Keep Barrow Beautiful will host a "Bring One for the Chipper" event Saturday, Jan. 4.

People are encouraged to bring their Christmas trees to be recycled. AKA Tree Care is sponsoring the event.

For more information, contact Danielle Austin at daustin@barrowga.org or 770-307-3005.

"Coffee Break Share Group is a great way for women to get together to share the laughter and hard times of their lives," leaders state. The share group is held monthly.